What becomes a legend most? Celebrity hair stylist Sam McKnight’s 70,000+ followers on Instagram are content to look at closeups of his flowers (with the occasional shot of Chanel backstage). Landscape designer Jo Thompson, who collaborated with McKnight on his garden, says: “It’s lovely to have a client who appreciates the intrinsic beauty of each bloom.”

McKnight has been at the top of his game forever; his back catalog is filled with every glamorous female you care to name, from Princess Diana to Madonna, many of whom remain firm friends. When the New York Times ran the headline “Kate Moss is more into gardening than clubbing these days,” (referencing British Vogue) they were talking about the supermodel’s conversations with Sam McKnight.

Beyond the flowers, what does McKnight’s garden look like? It has great bones, like a photogenic face. Let’s take a tour: 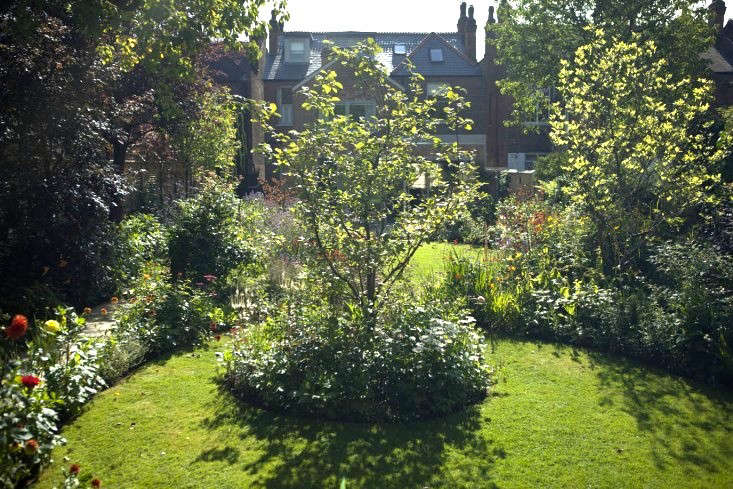 Above: Looking back toward the house, with an island of planting around a quince tree. For somebody who likes to entertain outdoors, this is a clever way of screening the eating and cooking area from the neighbors. Most London gardens are overlooked, no matter how long they are. 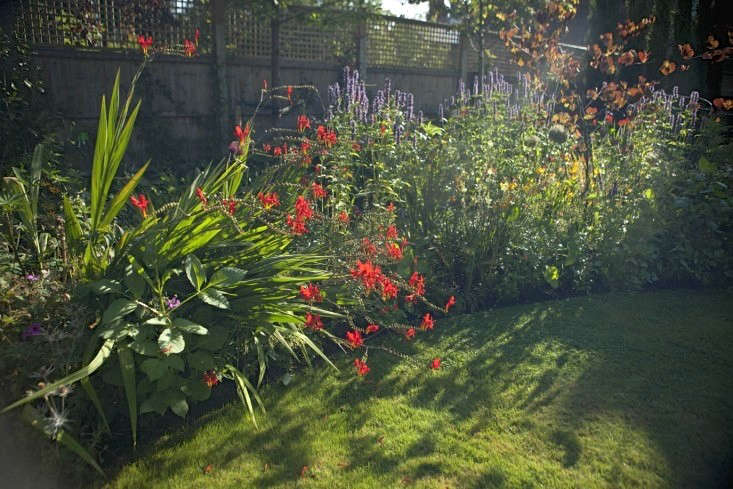 Above: The late summer garden, when giant scarlet crocosmia ‘Lucifer’ takes over from peonies and hardy geraniums; seed heads of allium mix with spires of mauve agastache ‘Blackadder’. The small copper-leafed tree is Cercis cadensis.

A challenge for McKnight’s friend, landscape designer Jo Thompson, was “fitting in every plant a plantoholic loves.” Treating this as a positive really cemented their relationship. “Athough I’m known for including a lot of plants,” says Jo, “nothing compares with Sam. So, I had to see how we could fit it all in, without being dotty and bitty.” 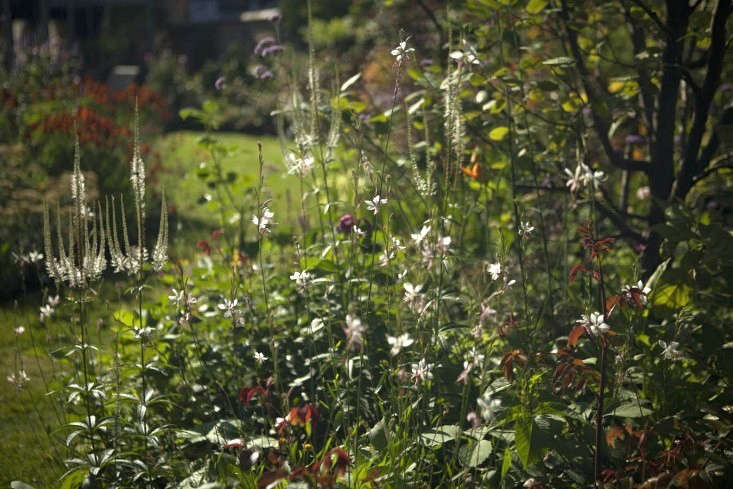 Above: A screen of Gaura lindheimeri with Veronicastrum virginicum ‘Album’. “We’ve combined plants in such a way that it seems like a meadow,” says Jo Thompson. “Tall, semi-transparent stems create veils through to other areas.” 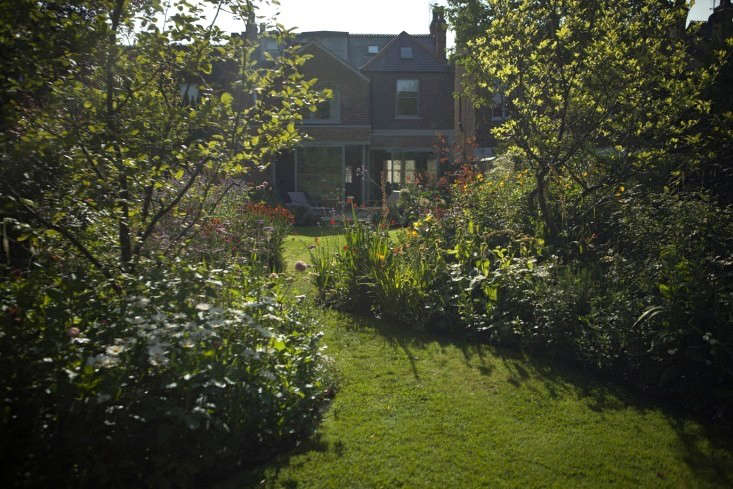 Above: McKnight loves his garden so much that he replaced most of the the back of his house with glass. A wide terrace connects the house and the garden. “I can sit inside in winter and feel as though I’m in the middle of the garden,” he says. “There is only glass separating me from the flowers.”

Thompson convinced Sam to shrink the lawn to create an hourglass shape of packed flower beds. “He had the idea of being enveloped with flowers,” she says. Any in particular? “Every plant you can think of.”

The lawn-and-flower area is effectively divided into two rooms; the third section at the back being mainly about food. 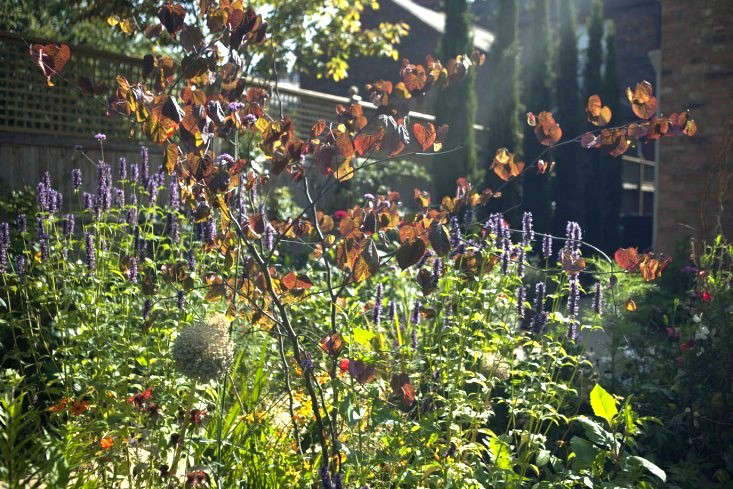 Above: Three small trees of Cercis canadensis ‘Forest Pansy’ mark the way through the garden, creating a rhythm in the riot of plants. “I did insist on some repeat groupings, of varieties or color,” says Thompson. “This ties together the planting and unifies the garden in all its different sections.”

“It’s great working with Sam,” Thompson continues. “He really pushes and challenges me; it’s become a true collaboration.” There was some discussion about how to screen the next door windows. “He had the brainwave of including five tall cypresses,” (shown Above). “I would have thought of cypress as too Mediterranean,” says Thompson, “but this works perfectly.” 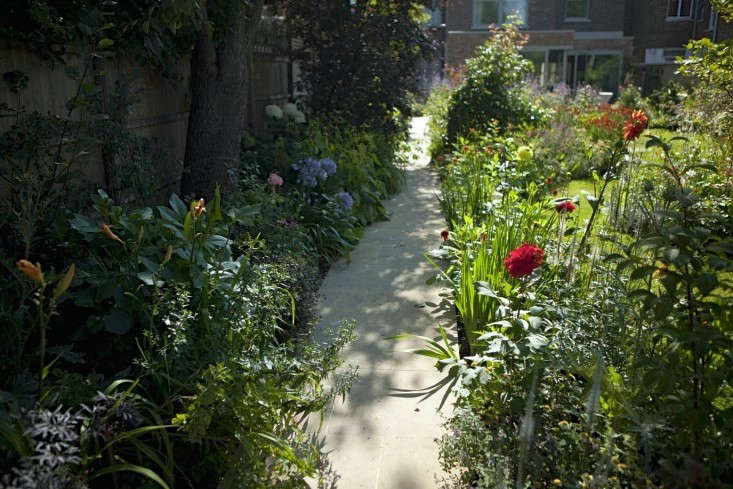 Above: Two straight paths run the length of the garden on either side. Neither is clearly visible from the middle of the garden, yet they provide practical access and–yes–an excuse for extra borders. 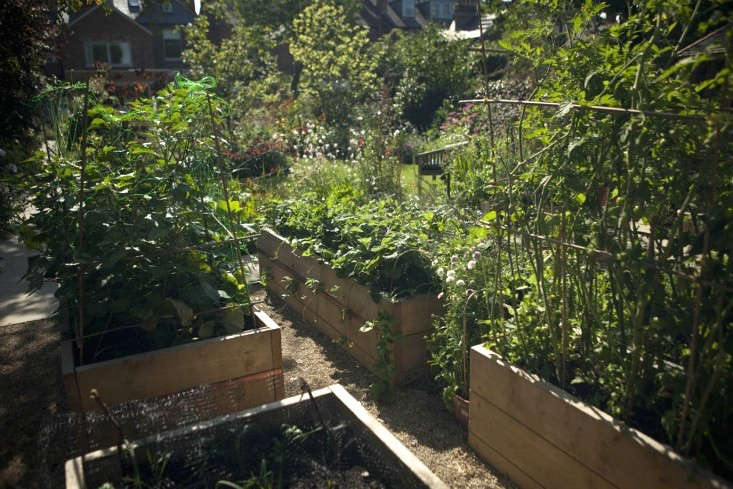 Above: The mood changes at the back, with a shed, barbecue and eight raised beds for growing food. “The veg beds are doing okay,” admits McKnight. “But I’m a beginner, so let’s see.”

Above: “When I moved in,” continues McKnight, “the garden was a bland rectangle and I pottered about in the borders (with about 50 extra pots) for a couple of years.” When the house renovations were finished he called in Thompson, whom he’d met through a mutual friend at the Chelsea Flower Show. It’s difficult to grasp how young this garden is: “Jo and I set to work on it last year.” 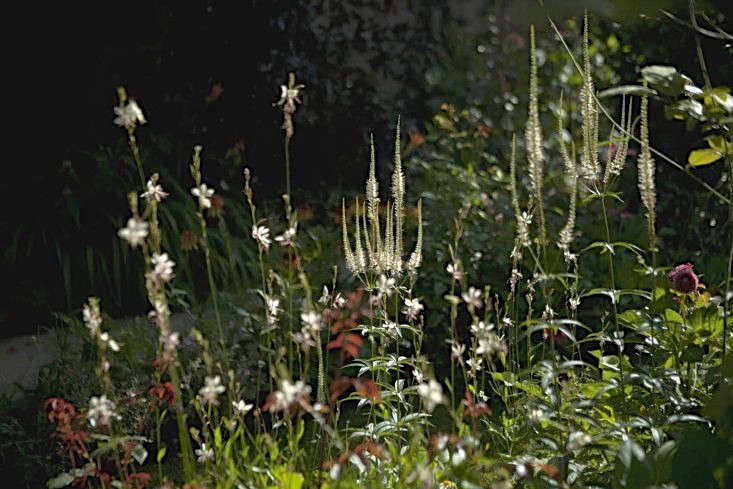 Above: From plantoholic to plantsman: McKnight’s waving combination of pale Veronicastrum and Gaura. Sam and Jo continue to work as a team on the young and evolving garden. “It is very dear to my heart,” says Thompson. “It’s a got a feeling of being loved; a happy garden.”