Ditchley Park in Oxfordshire was the epicenter of elegance and fun in the 1930s. Saved from terminal decline by the fabulously wealthy Trees (Ronald and his wife Nancy, before she was known as Nancy Lancaster), it was restored with a historic sensibility combined with American ideas of comfort. Heating and plumbing were quite a draw in themselves: No wonder Winston Churchill chose it as his WWII weekend hideaway.

Photographs courtesy of The Ditchley Foundation except where noted.

Above: Ditchley in March. The Trees’ country place was considered safer for Churchill and his entourage when the moon was high, as the drive was hidden by trees. It was noted in their circle that Ditchley was preferable to Churchill’s house Chartwell and the official PM residence, Chequers, not only for security reasons.

Like a Fred Astaire movie from the ’30s, life at Ditchley was a fantasy world of opulence: the Great Depression took place elsewhere. Thinkers, talkers and performers were a regular fixture. Churchill must have been feeling overwhelmed when, on being introduced to philosopher Isaiah Berlin, he asked: “Which one of your musical comedies is your favorite?” 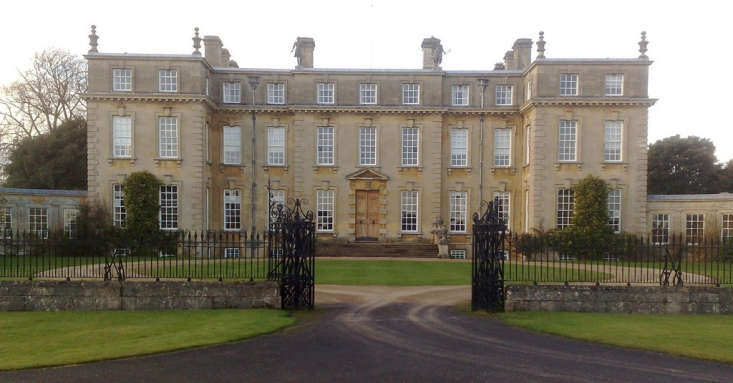 Above: Ditchley Park may have been built in 1722, but its glory days began from the day the Trees moved in. Remarkably, their taste was as impressive as their funding. Her many admirers said that Nancy had the best taste in the world: she liked to rough things up whereas Ronald was more of a “pure palladian.” Photograph by Jeff Jarvis via Flickr.

“I can mix things,” Nancy Lancaster told Robert Becker when he was writing Nancy Lancaster: Her Life, Her World, Her Art. “If Ronnie and I had gone into business together I’m sure that we would have made a big success.”

Above: Nancy always extended her flair from the interior to the exterior. The editor of Country Life introduced her to Geoffrey Jellicoe, one of the most influential landscape designers of the 20th century and he brought with him Russell Page, author of one of its most influential books, The Education of a Gardener.

Above: Italianate formality. The terrace was laid using slabs excavated from the cellar. Double rows of pollarded limes, a Jellicoe speciality, were planted to frame the view from Nancy’s bedroom.

Like the decoration indoors, the arrangement of the garden was not a period piece: it was an idealization of what the 18th century could have been, with 20th century hindsight. Where Capability Brown had swept away formal landscapes, Nancy was very happy to put one in because it looked right. The house had looked disconnected from the park so the Trees and their talented designers created terraces and steps, adding a sunken parterre (now grassed over) with a half-moon swimming pool at the end.

Above: When the Trees arrived in the 1930s the garden was on its knees. They discovered later that there was not only one temple but two, hidden in the undergrowth.

Ditchley house and village were just a part of the 3,000-acre estate.

Above: The house from the lake created by Capability Brown.

Anglo-American Ronald Tree was a Tory MP, along with the Anglo-American Winston Churchill (who grew up on the estate next door, Blenheim Palace). Nancy Tree’s aunt, Nancy Astor was the American-born first woman MP. It is no surprise then that the Ditchley Foundation today is a place of learning and political thought, with a slant on extending Anglo-American relations.

The Gardens of Ditchley Park are occasionally opened to groups by prior arrangement. See The Ditchley Foundation for information.

Nancy Lancaster: Her Life, Her World, Her Art

Fresh as a Daisy: A Wildflower Roof on a Home Designed by Fraher & Findlay