A summerhouse on a plot of land, to visit every weekend while wearing country garb—this is not the vision of New Yorkers escaping to Connecticut but of Russians, during the time of Tolstoy and Chekhov. The latter, one of the most enduring playwrights of all time, was also a family doctor, a dedicated humanitarian, and a gardener.

Dacha gardens were typically filled with hardy Russian perennials and medicinal plants. The White Dacha, where Chekhov wrote The Seagull while gardening and treating patients, was recently saved and restored (with the help of the Anton Chekhov Foundation in the United Kingdom) and has been an inspiration for British gardeners Anna Benn and Hannah Gardner. They created a Chekhov-oriented garden at the Hampton Court Palace Flower Show this month, and it is a digestible lesson in Russian gardening. Forthwith, 11 ideas to steal from gardens in Russia:

Wood, as well as the forest, is a part of Russian national identity and for a thousand years almost everything was made of wood. Nails on the other hand, were less easily obtained, leading to some inventive building work (including vibrantly painted onion domes). Decorative fretwork on roofs, windows, and doors is a celebration of wood for wood’s sake.

The hayrick should really be called a straw rick and if this was not a show garden, it would be further away. The straw rick shown here is based on original photographs; straw was made and stored on Chekhov’s land for re-thatching village houses. A dacha owner was expected to look after the local community.

The expression sidet u samovara translates to “sit by the samovar,” while the word chainichat surely deserves wider use, instead of “chatting over tea.” Samovars, with their internal water-heating systems, are at the center of Russian culture and that of its neighbors, Persia and China. It was from the latter continent that Russian tastemakers took up the habit of tea drinking. The samovar became synonymous with leisure and good conversation for the 19th-century’s cultural elite, Chekhov among them.

In reality, tea (let alone a samovar) was out of reach for many Russians. At the Chekhov garden at Hampton Court Flower Show, the flower that attracted the most comment from bona fide Russian visitors was the white willowherb, since its wild cousin—rosebay willowherb—is held in fond memory as a free alternative to expensive tea from China or India. Its leaves are fermented to make Ivan chai.

“Dill is Russia’s favorite herb,” says Anna Benn, who along with Hannah Gardner designed Anton Chekhov’s Garden. “There is a strong tradition of pickling just about everything.” Cucumbers and tomatoes (both can be pickled) feature in the garden. Besides pickling, fermentation was embraced in Russia before the practice traveled west, in the form of gut-friendly kombucha and kefir.

The term dacha has changed in meaning over the centuries; crops produced on local dachas today are an important part of the food economy while once, dachas were intended strictly for leisure. Plots of land were given to faithful servants of the Tsarist system (dacha comes from the word “to give”) and the expectation was that a cottage would be built on this land. These buildings could be bought and sold, which is how Chekhov acquired one after earning enough from his plays. Today a dachnik is interchangeable with a gardener (sadovod). The plots of land are smaller, yet highly productive.

Everything in this garden has healing properties. “The Russian tradition of herbalism, largely due to poverty, has always been very strong and still is,” says Anna. “You only have to go into a Russian chemist to see this.” Chekhov treated patients from his dacha south of Moscow, and when supplies ran out he naturally turned to herbal remedies.

Hips from Rosa rugosa are rich in vitamin C. Roots of phlox help to alleviate cold symptoms and stomach aches. The leaves and flowers of wood betony help circulation and nerves, and yarrow is a cure-all. The College of Medicine (and Integrated Health) in the UK looks at natural alternatives to pills and procedures.

You can’t have a Russian garden without Perovskia atriplicifolia, the Russian sage. It’s a useful all-arounder elsewhere too, its felty stems and small studs of flowers keeping their shape and color throughout summer and autumn. The last word in Russian purple is probably lilac (not in season for our purposes). It is “the most typical of Russian shrubs,” says Anna.

An Orchard (Not Necessarily Cherry)

The Russian word for “garden” and “orchard” is the same. What more does anybody need than a few small fruit-bearing trees? Apples are particularly pertinent here; they originate from nearby Kazakhstan, part of the Russian empire in Chekhov’s time. Apples require less maintenance than cherries, which need to be protected from birds for a reasonable crop. Also: Chekhov wrote The Seagull at the dacha that inspired this garden; The Cherry Orchard came later. 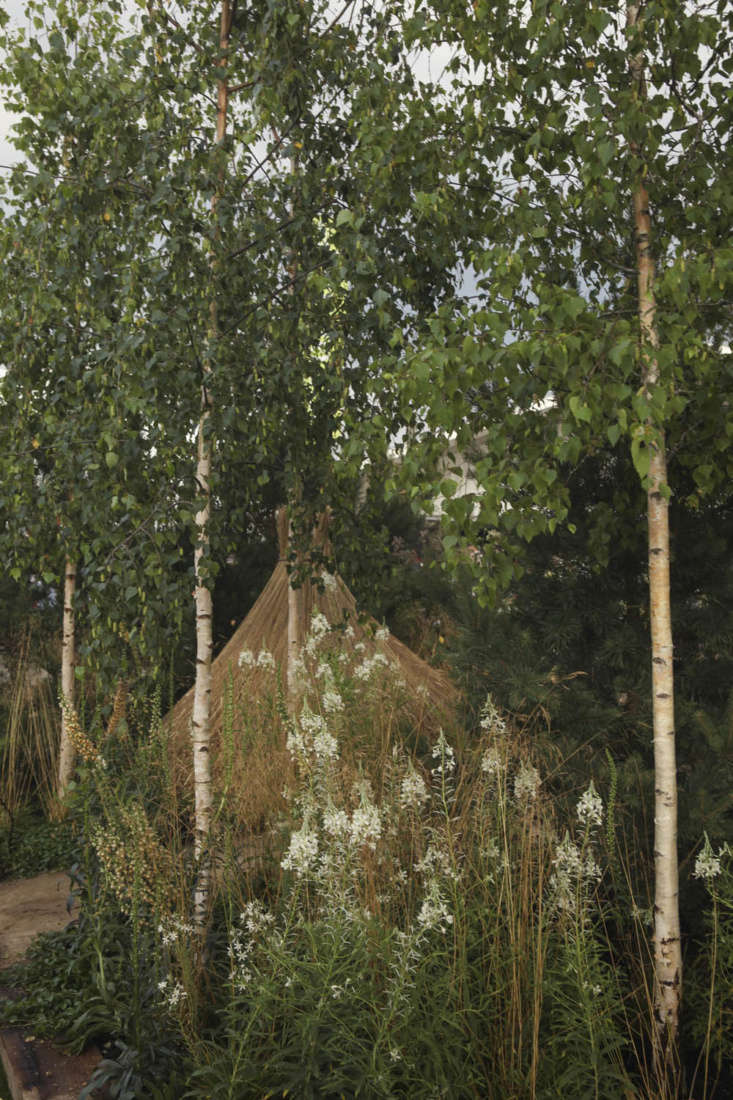 Above: Silver birch against a perimeter of pines. The understory is made up of Deschampsia caespitosa, Digitalis ferruginea, and Epilobium angustifolium ‘Album’.

European white birch is a nordic icon, pale trunks glowing in the low winter light, the backdrop to fairy tales involving wolves and bears. Alternatively, you can’t beat a group of Betula pendula in a town garden (in USDA zones 2 to 6) for dappled shade. The paths, typical of a birch forest floor, are a mix of sand and white aggregate.

Photographs of Anton Chekhov in his dacha show him taking it easy on rough-hewn benches like the one here, made of split oak. As permanent furniture, a three-sided bench around a square table is a neat solution, especially when the flat planes are balanced on columnar tree trunks.

Vote for the Best Amateur Garden in Our Design Awards