Add romance and hazy color to your life–and create instant curb appeal–by planting perennials grasses in a front yard, alongside a path, or as a mini meadow.

Hardy, drought-tolerant perennials grasses are year-round friends who will turn golden and feathery in winter months. The graceful, architectural clumps are equally striking when planted in broad swathes or as punctuation in an ornamental garden bed.

Grasses are a cornerstone of a naturalistic style of landscape design that owes its current popularity to Dutch garden designer Piet Oudolf, whose planting schemes recently transformed an eyesore elevated railroad track into New York City’s magnificent High Line park. We’ve borrowed a few ideas from him and other garden designers to come up with a list of ways to add curb appeal with grasses: 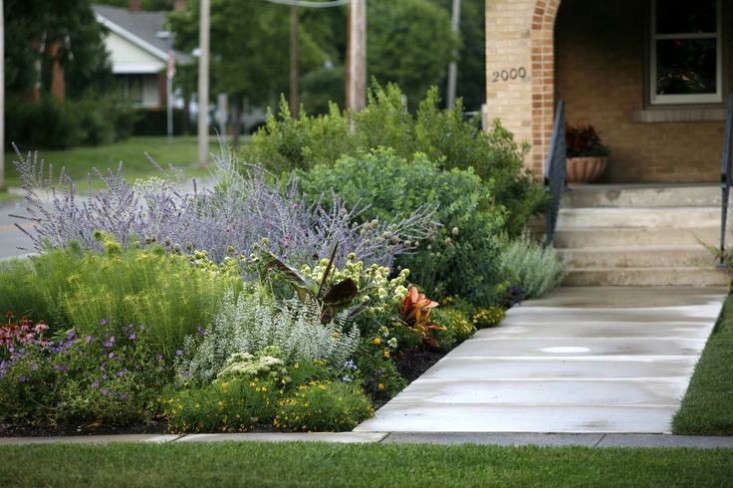 On a busy corner lot in Springfield, Illinois, garden designer Adam Woodruff replaced his own front lawn with a modern interpretation of a cottage garden. The mix of low-maintenance perennials, ornamental grasses, and shrubs creates a colorful mini meadow and persuades pedestrians to stay on the sidewalk instead of taking a shortcut across his yard. 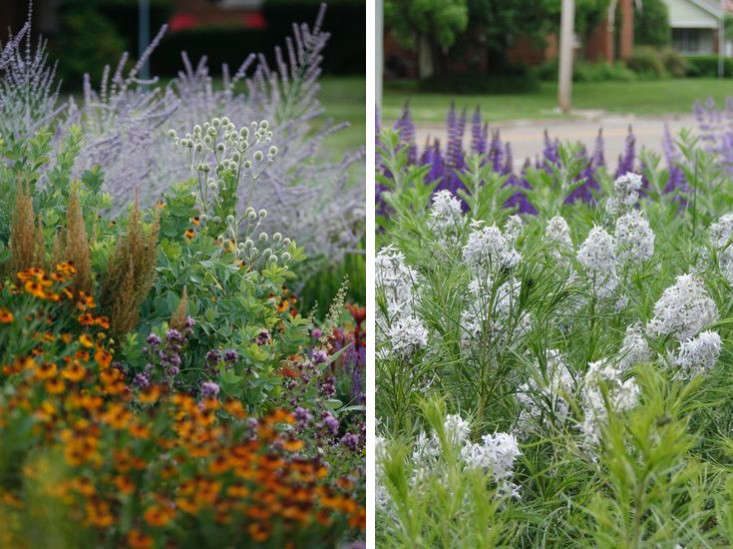 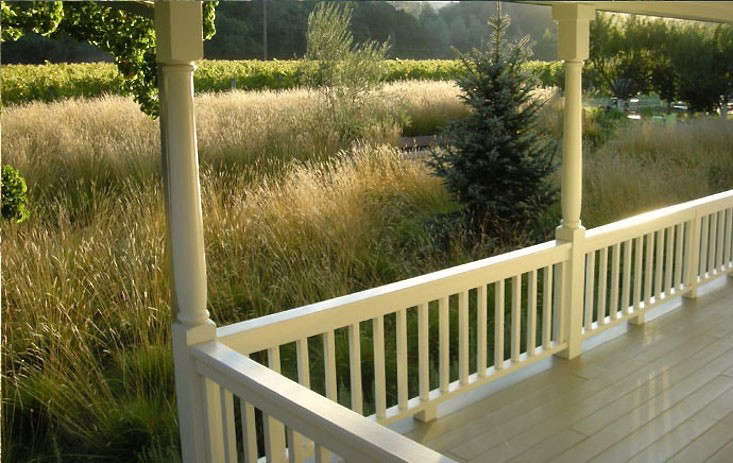 Above: Photograph courtesy of Lucas and Lucas. 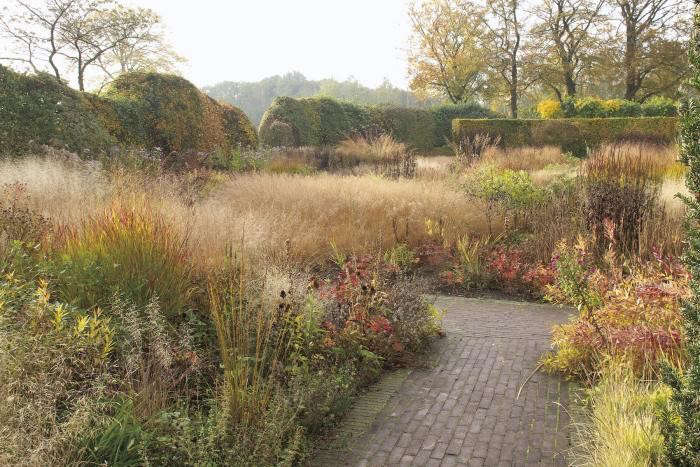 Above: Photograph by Piet Oudolf courtesy of Planting: A New Perspective.

In Dutch garden designer Piet Oudolf’s own garden, he planted low-growing late-season grasses to avoid obscuring the view. Interspersed are such perennials as Veroniscastrum virginicum (R) and clumps of taller Molinia caerulea grasses. 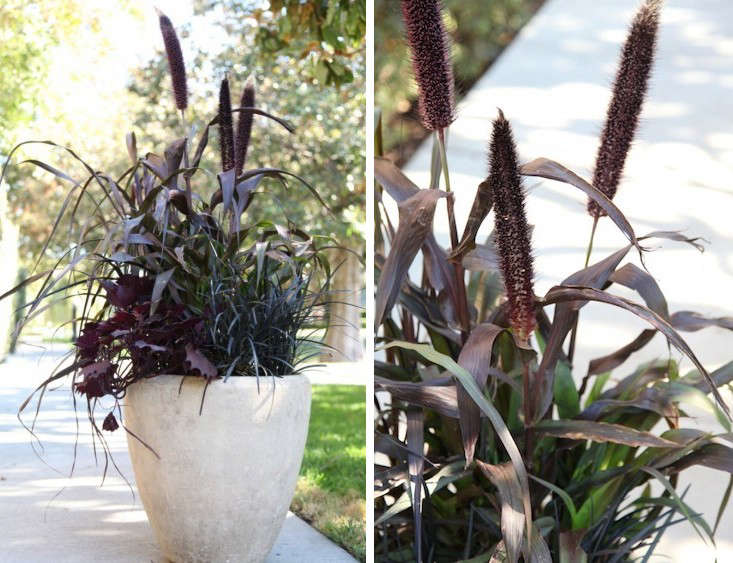 Above: Photograph by Meredith Swinehart. 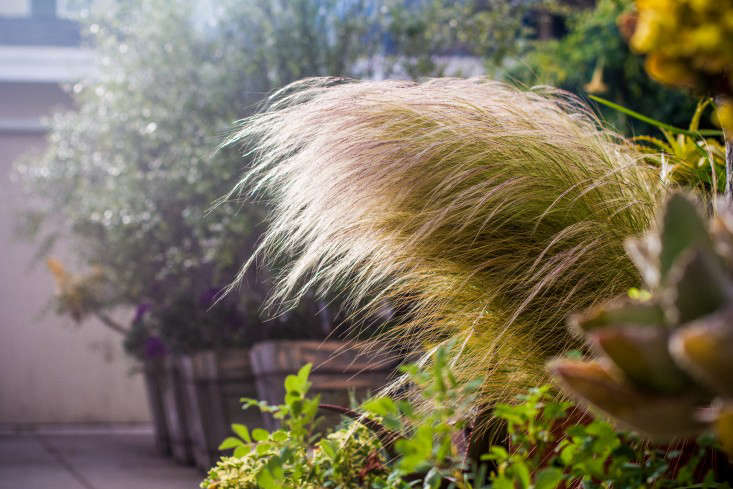 Above: Photograph by Rob Co.

Garden designer Jennifer Segale of Wildflower Farms plants Stipa and other grasses in containers to give movement, “which I find is incredibly important in container gardens,” she says. “Clusters of potted plants can feel heavy and stagnant without a feeling of openness and ample movement.”

For more, see Garden Visit: My Driveway Oasis in Half Moon Bay, California. 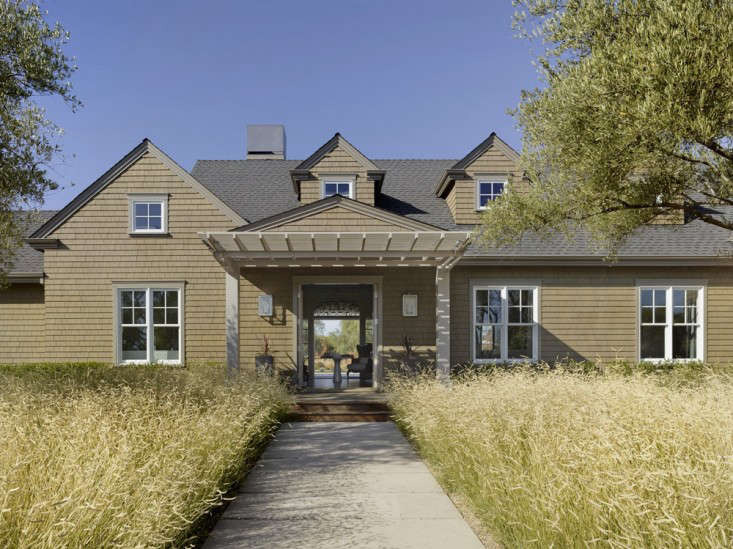 Above: Photograph by Matthew Millman courtesy of Scott Lewis.

In northern California’s Napa Valley, landscape architect Scott Lewis replaced turf grass with Bouteloua gracilis “˜Blonde Ambition’, a sturdy grass that will stand upright through autumn and into winter “until you get a really, really hard frost or a really big rain,” says Lewis.

For more, see Vineyard Haven: A Napa Valley Garden That Belongs to the Land. 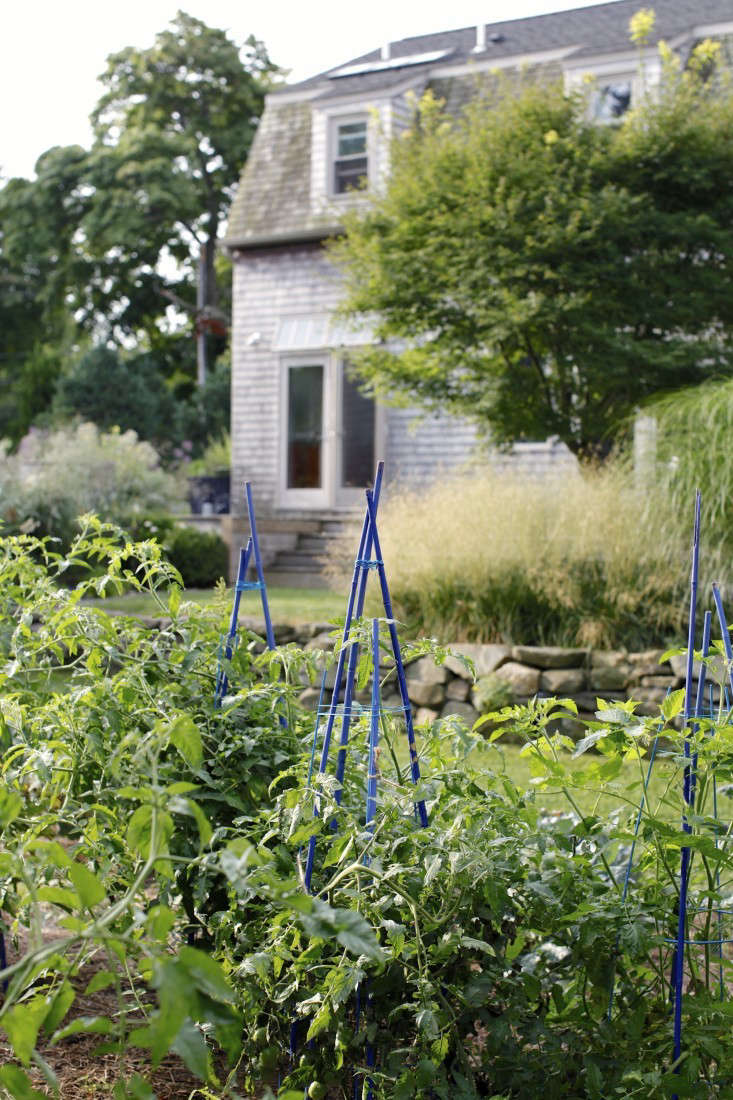 Above: Photograph by Christine Chitnis for Gardenista. For more of this garden, see At Home with Rhode Island Artist Georgia Marsh.

In a Rhode Island garden, artist Georgia Marsh planted grasses along the foundation of the house, using them as a hedging plant to add an extra layer to the garden. 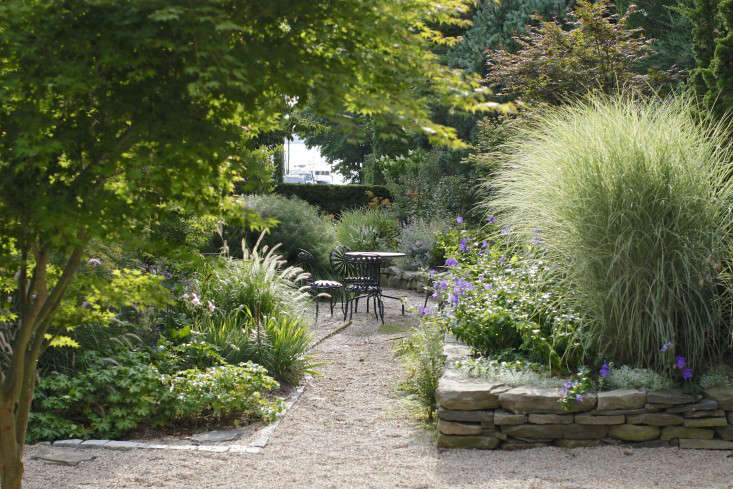 Above: Photograph by Christine Chitnis for Gardenista. For more of this garden, see At Home with Rhode Island Artist Georgia Marsh.

A single clump of tall grasses creates height and depth in an ornamental garden bed at artist Georgia Marsh’s home in Rhode Island. 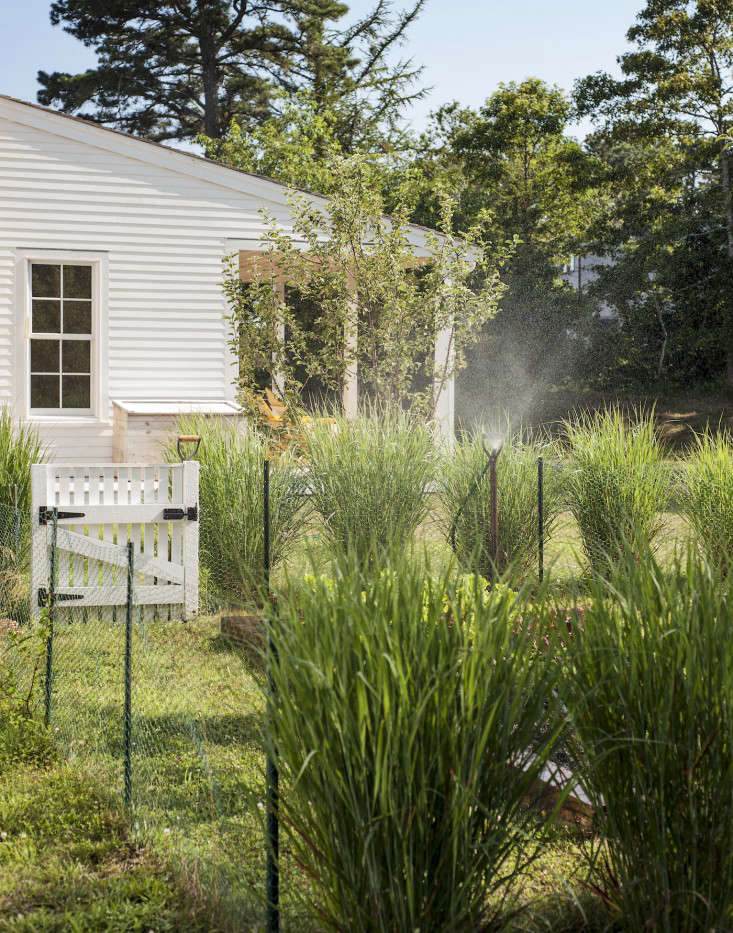 Above: Photograph by Matthew Williams for Gardenista. For more of this garden, see An Architect at Home: A Kitchen Garden on Cape Cod.

Tall clumps of grasses “hide a multitude of sins” in architect Sheila Bonnell’s Cape Cod garden, where they soften the look of a chicken wire fence that surrounds the vegetable garden. 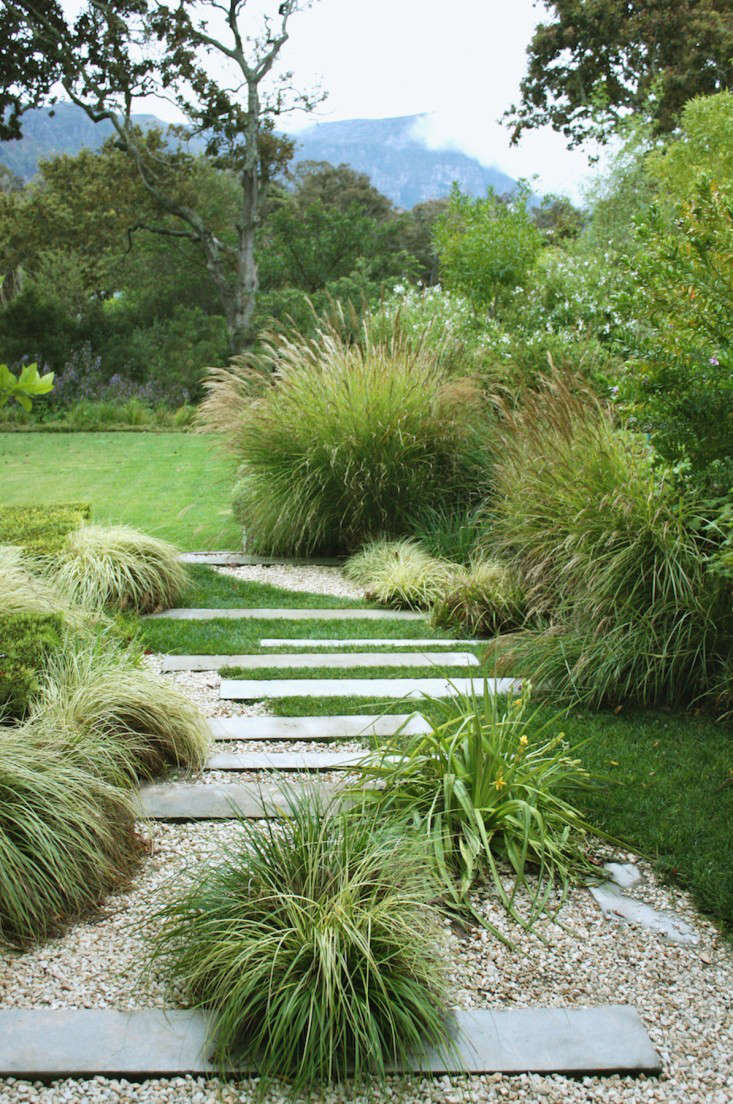 Above: South Africa-based landscape designer Franchesca Watson uses tall grasses to create focal points to draw the eye in a suburb of Constantia. For more of this garden, see Garden Designer Visit: A Study in Green by Franchesca Watson.

A clump of grasses, deliberately sited, can have the same visual power as a three-dimensional statue in a garden.

For more of our favorite ways to use plants to create curb appeal, see DIY: Container of the Month Pots & Planters.

Finally, get more ideas on how to plant, grow and care for various grasses with our Grasses: A Field Guide.

Additionally, get more ideas on how to plant, grow, and care for various perennial plants with our Perennials: A Field Guide.

Lessons Learned: Salvaging a Garden From a Previous Remodel

10 Garden Ideas to Steal from Scotland