Luke and Petra Hoyer Millar are unusual people; they moved to their current address in Oxfordshire two years ago but though they love their house, they’ve ignored it. Instead, the garden has taken all their attention, proving what can be achieved in a short time, with careful consideration. Their main labor has been in undoing someone else’s expensive makeover.

We ask them about specific lessons they have learned in bringing this garden back to life:

Photography by Jim Powell for Gardenista, except where noted.

What do you wish someone had told you in the beginning? 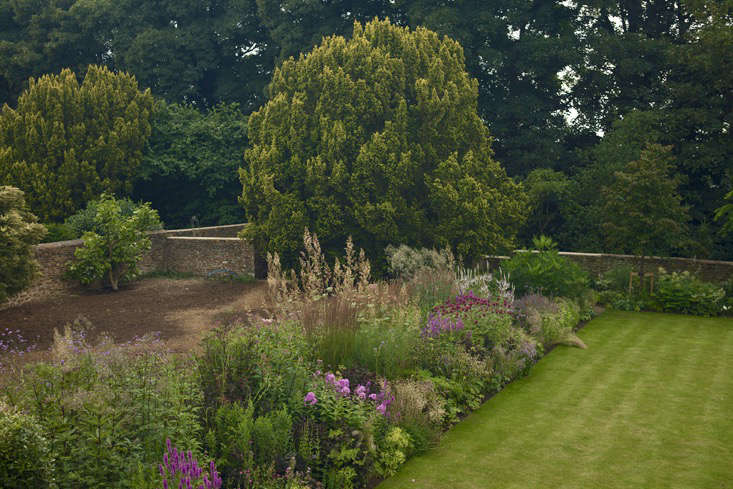 Above:  “The cost of dry stone walling,” says Luke. The Hoyer Millars’ property at the back of the house consists of two main gardens enclosed by dry-stone walls. To the right is an English country scene: generous lawn flanked by three deep borders and a terrace. To the left is a future herb garden, which has recently been reclaimed from a failing “potager” style garden of diamond-shaped beds framed in dead box. Hidden behind the yew tree is a shed and a row of five composters. It’s a fairly simple shape, with acres of pristine dry stone walling. 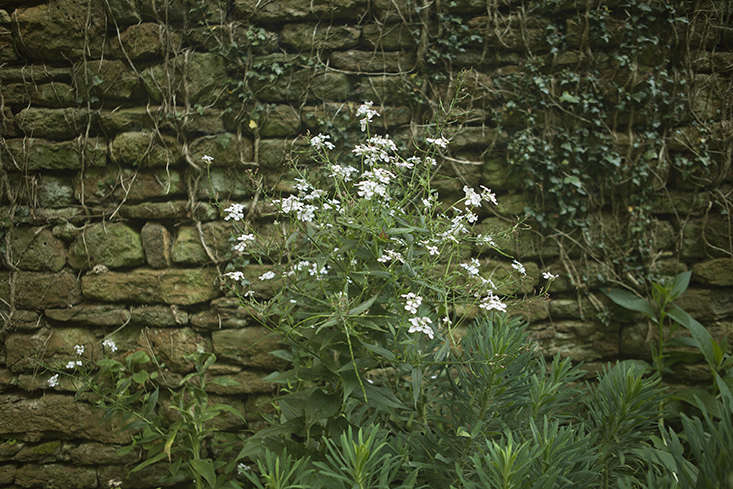 Above: Almost all of of the stone walls had to be replaced. Previous owners had covered them with chicken wire, to encourage the ivy that led to their destruction, while allowing hazels to dig in as well. In the future herb garden, the wall was also smothered with free-flowing Clematis montana and spiky Berberis. One reward on its removal, was the discovery of a long-suffering large leafed magnolia.

What do you love most about the garden? 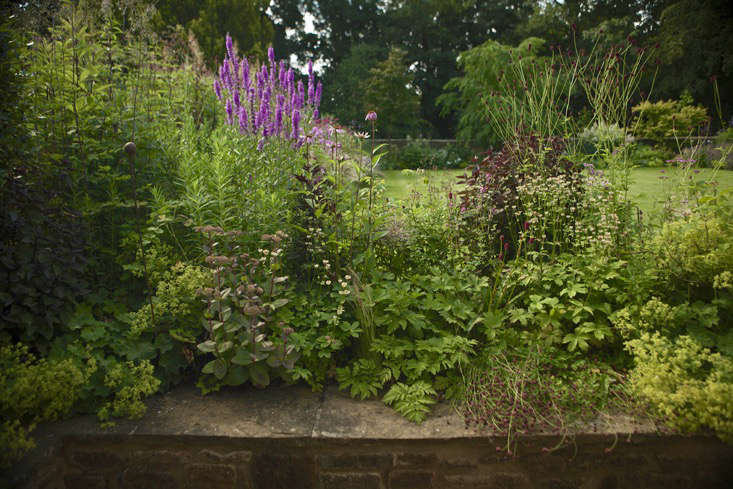 Above: The main garden from the terrace, which is set on a lower level.

“Part of the reason we bought the house was that from every window, you can see the garden,” says Petra, whose Oxonion Gardener is one of the more learned contributions to the blogosphere. “We live in the garden; we’re out here more than we’re indoors.”

How does the view from the windows look in all four seasons? 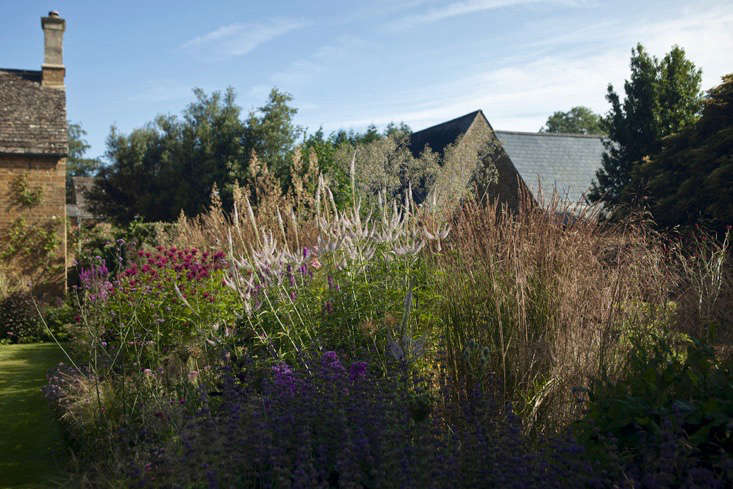 The garden is on show all year round, which can be a challenge. “I work quite hard at making the garden look good in winter,” continues Petra. “The grasses are there, the thalictrums are fantastic, the eupatoriums are wonderful. I have lots of things that die nicely.” The big cut back takes place in March.

How did you deal with pre-existing trees? 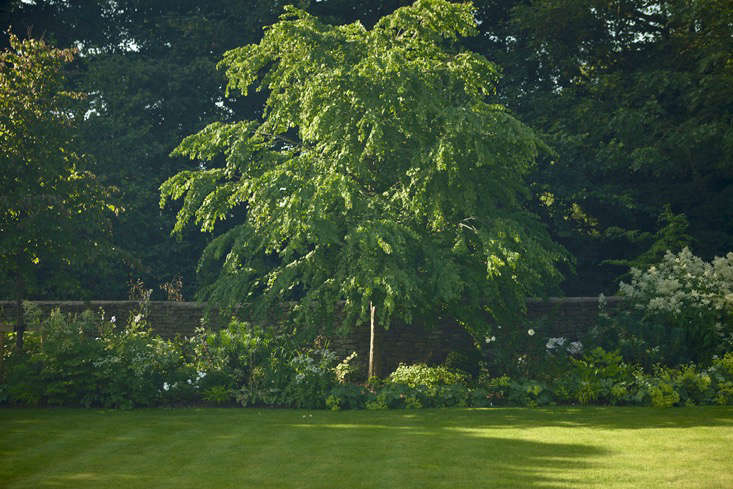 Above: Sighs of relief from this rejuvenated garden are almost audible as Petra Hoyer Millar shows us around. The centerpiece of the back of the lawn is a pre-existing katsura tree that turns a delicate shade of pale orange in fall, while emanating the smell of cooking toffee. Petra has added some acers to amplify the color sequence later in the year. On the other side, she and Luke fast-forwarded the woodland garden by planting mature hornbeam and hazel. Otherwise, they would have been invisible from the main garden, for too long. 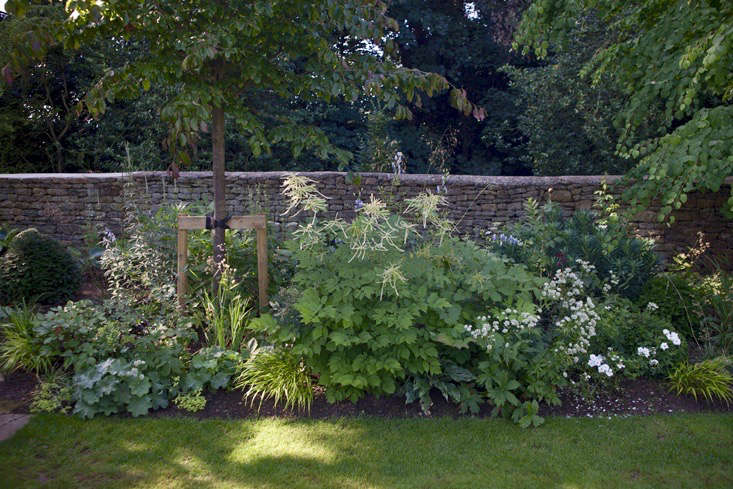 Above: Oversized trees by the dry stone wall at the back of the garden were replaced by more choice specimens such as this Parrotia persica. Trees which crowded in from behind the wall were thinned to create a feeling of depth and calm. Spring and summer color is neutral back here as the garden recedes towards woodland, in the grounds of a ruined castle next door.

Did you change the size or layout of garden beds? 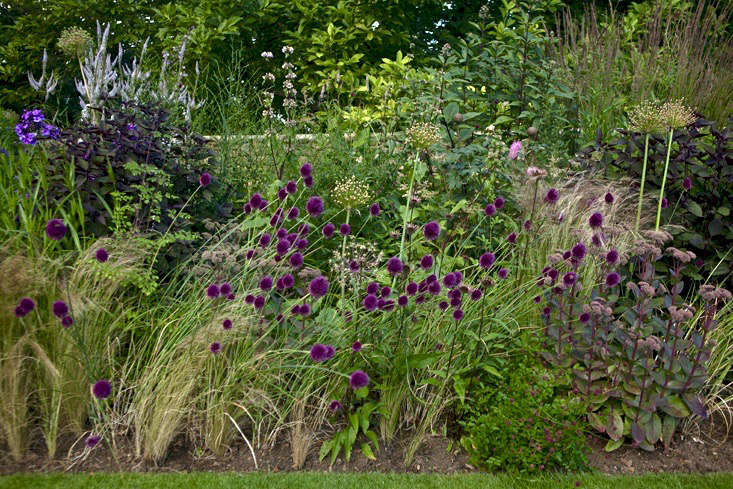 Above: Petra and Luke increased an east-facing border border, from 3 feet to 10 feet deep. There is now room for globes of alliums, with seedheads of Allium christophii and purpurea shown here, as well as colonies of Allium sphaerocephalon. Sedum ‘Matrona’ is darker here than on the terrace since it has more light.

What hardscape elements did you add? 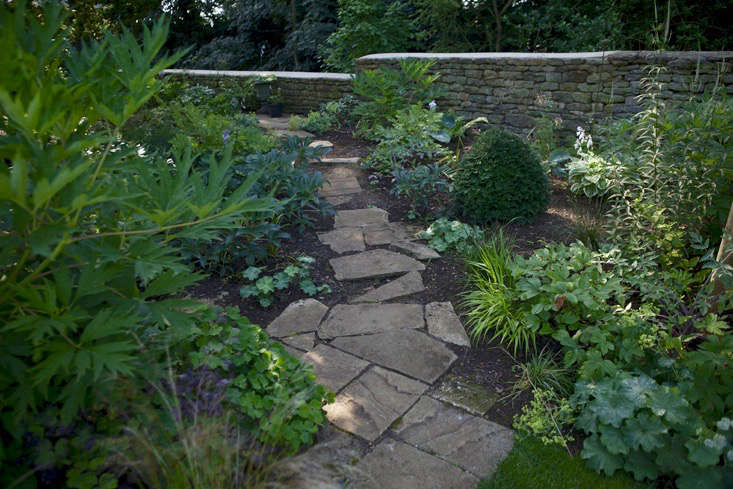 Above: A footpath of irregularly laid pavers winds through a newly created area of garden which was previously unusable, since it was overrun with outgrown shrubs. Alongside the path is a venerable yew, planted around with spring bulbs. The solid, newly restored wall is a tempting place to perch. 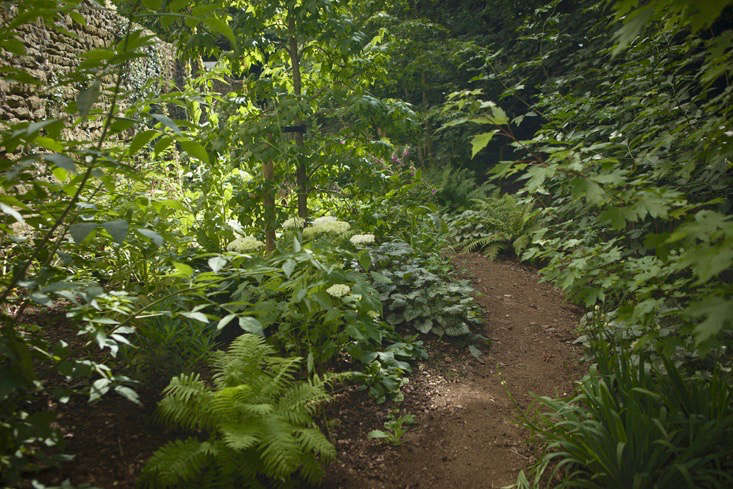 Above: On the other side of the back wall a woodland garden was created, adjacent to a footpath by the castle. Foxgloves and snowdrops were already here, plus verbascum (it gets afternoon sun). Petra has added ferns, Hydrangea arborescens ‘Annabelle’, a nicely blotched Pulmonaria ‘Sissinghurst White’, sweet cicely, and some Euphorbia characias subsp. ‘Wulfenii’, moved from another part of the garden.

What did you discover about irrigation?

“We had no taps, except two by the house; there were none around the garden,” says Petra. Instead, a rigid irrigation system had been laid, which prevented any digging or feeding of the borders, and it showed. Petra favors the “leaky hosepipe” method, in which moveable tubes can be laid down during the growing season and put away in winter.

Petra and Luke happen to have a well in the yard by the kitchen: “We’re going to take some of that water. It will be pumped up from under the house to three more taps around the garden.” Including one by the future greenhouse.

What’s surprised you most as the garden has matured?

“As every gardener learns, it takes a lot longer than you think it will,” says Petra. She’s repeated sambucus around the garden since she liked the one that was here before. “The black elders are taking ages to get settled.” It’s only been a year or two; is she just impatient? 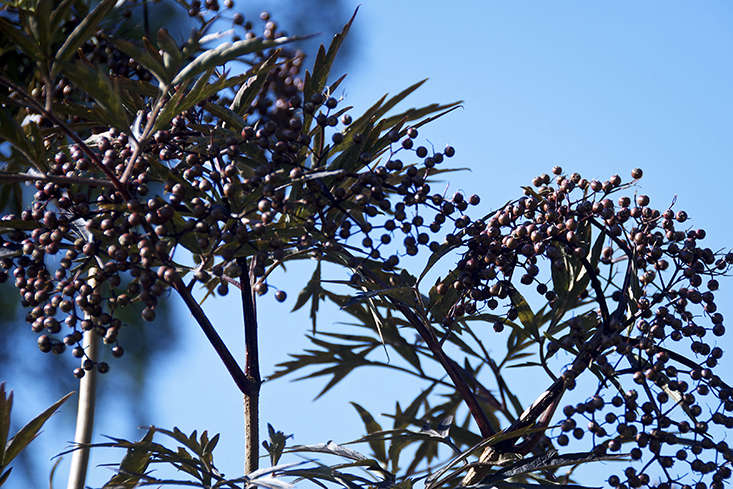 What grew in a different way than expected?

“The monarda has been mad. On one side of the lawn it is 3′ tall which is normal for me, but it has grown to 6 feet on the side that faces west,” says Petra. “It’s ruined what I was trying to do!” All of her prairie plants, including grasses and eupatorium, have thrived in the full sun. The fact that the soil is worse on the sunnier side has made no difference. 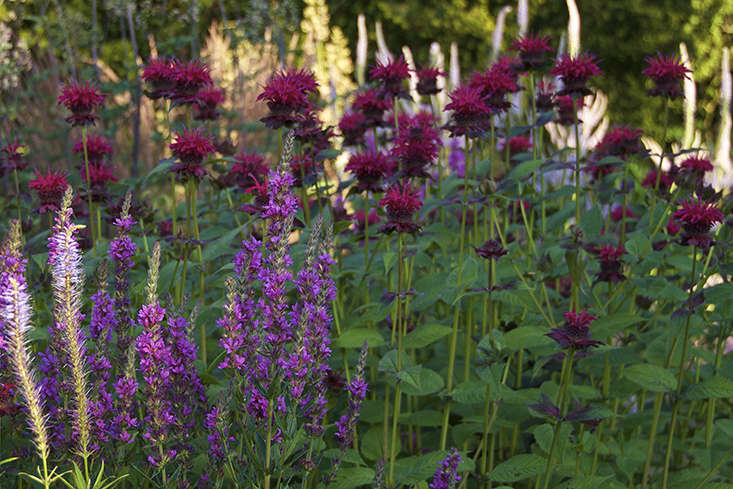 What did you keep from the previous garden?

A mysterious pink phlox, thought to be ‘Sandringham’, which has been joined by more phloxes in less subtle shades, a California tree poppy, which interrupts the flow with its white flowers but has lovely glaucous foliage. 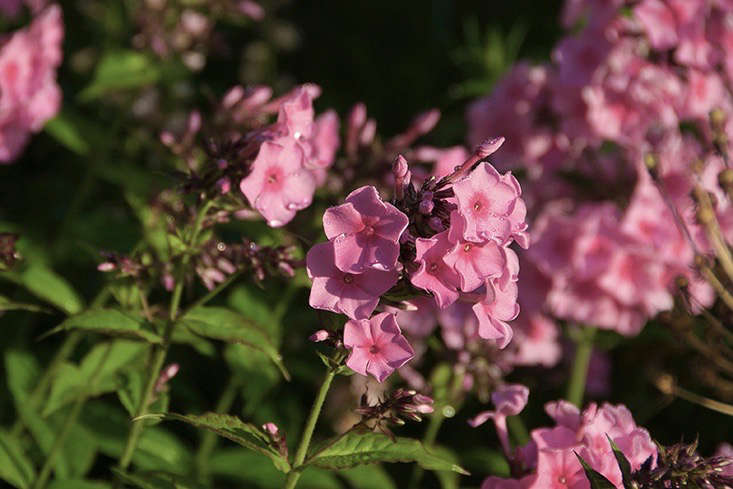 The most popular pre-existing shrub was the black elder. It set the tone for the rest of the borders of purple and pink and is co-anchored by a dark eupatorium. Ageritina altissima ‘Chocolate’ is the updated name and it is smaller than most, growing to about 4′ and flowering much later, in October.

How did the habits of previous owners affect the layout? 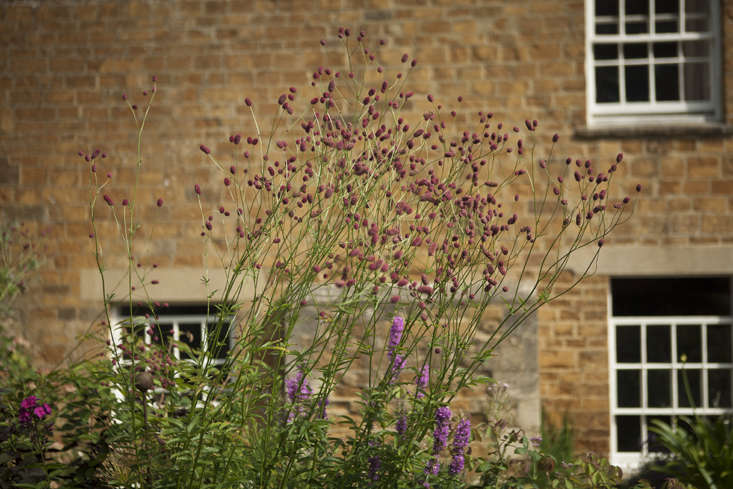 Above: Sanguisorba officinalis between the terrace and garden.

“They threw rubbish over the wall for years,” says Petra. Garden refuse reached almost to the top of the 10-foot wall. “When the gardener stayed on, he found himself helping to clear it all away, planting trees there instead.”

How do you use your outdoor space in ways you didn’t before? 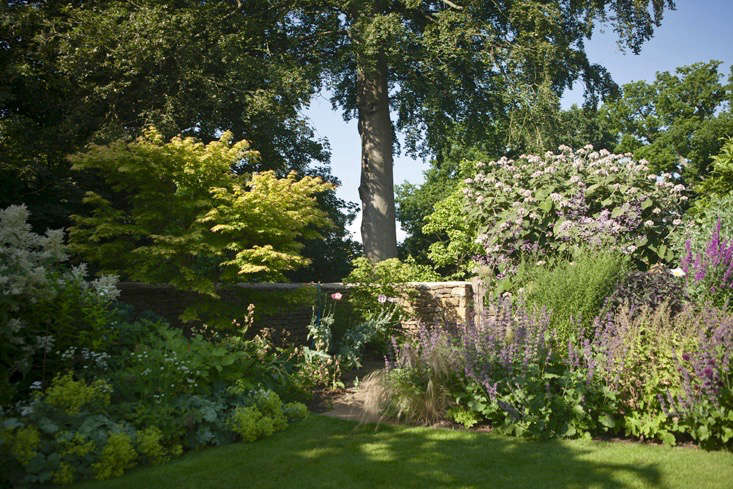 Above: The white coolness of the back border meets the general theme of purple and pink, separated by a path to the side door in the wall.

“I love the fact that we use every inch. We appreciate every corner,” says Petra. “We’re particularly pleased with the walk around the yew, leading to the shed. It’s practical; you get there quickly. We love the wild patch down below, so when we walk the dog we’re walking through a woodland garden.”

For more of our favorite English gardens, see In the Garden with Philippa: Brit Style with a Black Backdrop and Garden Visit: At Home with Daisy Garnett.