A couple of weeks ago during one of New England’s many recent snow storms, I witnessed a minor miracle of Nature: a robin convention in my yard.

Despite their reputation as “harbingers of spring,” robins don’t necessarily go away in the winter. But they can be very elusive. Roosting in large numbers, high in the trees, they won’t come down for your seeds. If you want robins to flock to your snowbound yard, you need to plant a winter berry garden.

Photography by Justine Hand, except where noted.

Above: Unlike summer, when robins spread out in breeding pairs, in winter robins flock together in large groups call “conventions.” In some parts of the country, these conventions have been known to include hundreds or even thousands of birds! And as in the famed Hitchcock movie, when a convention descends on your yard, the effect is thrilling.

Above: Despite the wind and snow, this little robin remains a cozy 104 degrees under those fluffed up feathers. His recent meal of berries from my Burning Bush will also help him generate the energy he needs to stay warm. (NB: This burning bush, an invasive which I inherited with the house, has now been replaced by two winterberries, a chokecherry, and a beautyberry.)

Above: With their favorite food source–worms, of course–beneath the frozen ground, the winter robins turn vegetarian. Of course all the sweet berries get eaten in the summer and fall, leaving only bitter fruits like these crabapples or the rose hips below. No need to pity the poor robin though, because with each cycle of freezing and thawing, these berries become increasingly sweet. 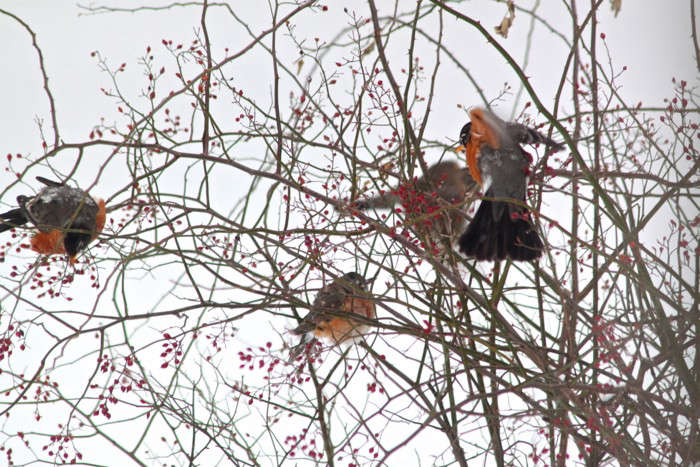 Above: In addition to these rose hips, the robins in my yard ate burning bush berries, crabapples, and winterberries.

Above: You may notice that your winter robins look a bit different. I thought this was just a winter coat. But my stepfather, an ornithologist, informed me that these are probably from Canada. (I guess snowy New England in south to some.)

Above: Next year, I’m going to make my winter garden even more enticing by replacing that invasive burning bush with snowberries, another robin favorite. A 1-quart pot of Amethyst Coral Berry Snowberry is $16.99 from Proven Winners. Photograph by Dale Hameister. 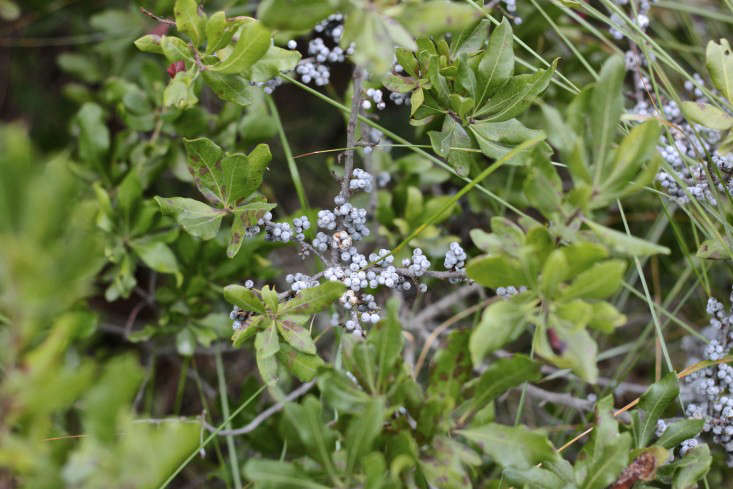 Above: Last fall I used these bayberries to make candles, but winter robins prefer to eat them.

Above: Of course robins aren’t the only birds that enjoy a winter fruit snack. Here a cedar waxwing bulks up on juniper berries. Photograph via The Lake Today.

Above: Mountain Ash ($22.99; ships in spring from Gurney’s) is another robin favorite that also adds color and texture to a winter garden. Others include hawthorne, chokecherry, juniper, and red cedar. Photograph by Joe Schreiber.

Landscaping Ideas: 10 Ways to Save Money During a Garden Remodel