In the colonial era, enterprising New Englanders quickly discovered that the wax produced by boiling the prolific gray berries that grew along the coast produced a clean, aromatic flame, and thus the bayberry candle was born. Though it was eventually replaced by mass produced waxes and commercial scents, the romance of the humble bayberry taper endures. So it was that one day last week, this native Cape Codder found herself giving this antique technique a try.

Above: The finished product; read on for step-by-step instructions.

Above: A common sign of September on Cape Cod, the branches of a female bayberry bush are covered with ripe berries, identified by their blue-gray hue.

Above: A native to the coast of New England, bayberries love the dry, sandy soil near the beach. Here, just as colonial girls would have done, my daughter, Solvi, helps me harvest berries by the shore.

About two pounds into it, I started to realized why colonial women quickly abandoned this practice. It takes a ton of berries, from six to eight pounds, to make one pound of wax. Thus, being a modern woman with access to online ordering, I decided to cut some colonial corners and combine our bayberry wax with beeswax, which I did not attempt to make myself. Phew! Solvi and I were able to harvest about four pounds of bayberries before our fingers gave out. Which I think is pretty good. 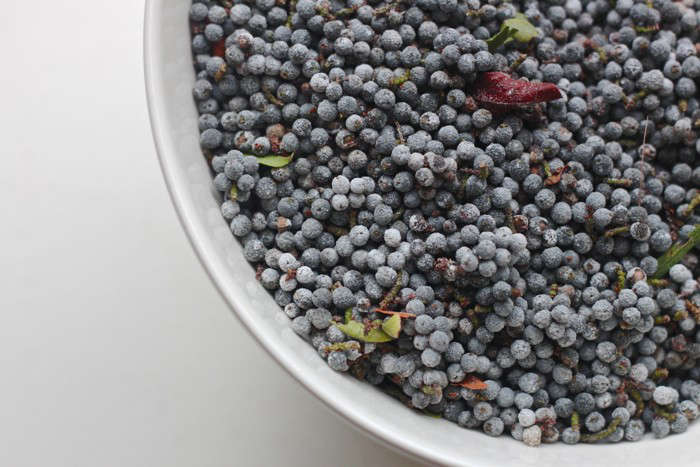 Above: A detail of our berries shows their lovely, heathery hue.

Above: Boiling the berries two pounds at a time. The characteristic pale green wax begins to melt and float to the top. (Because I was not actually relying on this paltry sum of wax to light my home, I found it pretty satisfying to watch the little bubbles of wax emerge.) After the wax cools and hardens, you can pick it right off the top of the water.

Above: Yet another step: In order to get all the plant bits out, after you extract the cooled wax from the water, you will need to place it in a pan, melt it again, and then strain it as shown here.

Above: The lovely results: Solvi holds our yield from about two pounds of berries. Time to boil and cool and strain another batch.

Above: Besides the bayberry wax, here’s what else you’ll need: melting can, beeswax, a wick (available at Brushy Mountain Bee Farm; $11.50 per roll) and something round, like a pencil, to use for dipping.

Above: The first dip! Using a large soup can, I melted my bayberry wax with one pound of beeswax, available at Brushy Mountain Bee Farm; $7.50 per pound.

Above: The candles begin to take shape. Alternating between several pairs at a time allows the wax to harden in between dips.

Above: A lovely shade of green. (The dips that form at the end can be snipped off with your fingers.)

Above: I made a simple drying rack using a couple of sets of chopsticks held in place under a cutting board at the counter’s edge.

Above: This part was really fun. While the first candles dried, I started on a second set.

Above: Wrapped in a little hemp from John Derian ($10) and some gold and cotton ribbon from Angela Liguori ($9 for 5 yards), my handmade candle are ready for gifting.

Extracting the wax: If you want to cure the 2 pounds of bayberry wax yourself, you need to collect from 12 to 16 pounds of berries. One recipe said, “About one moving box full” (!). I wanted to experience the whole colonial-style process. But even so, I wound up combining pure bayberry wax with beeswax. Next time I might opt to buy the bayberry wax. Available at Betterbee; $16.30 per pound.

After you collect the berries, pick over the batch to remove most of the leaves and stems. Place the mixture in a large stock pot and bring to a boil, then reduce to a simmer. Stirring occasionally, you will start to see the wax float to the top of the pan. After all the wax appears to be released, turn off the heat and let the wax cool.

After the wax cools and hardens, you can pick it right off the top. At this point the wax will have a lot of plant bits in it. To get pure wax, reheat this raw material until it melts, and then pour the hot liquid through a cheesecloth into a vessel. (I used a ramekin lined with aluminum foil so I could easily remove the wax after it cooled.)

Melting the wax: Place a soup or melting can into a bath of water within another pan. Bring the water to a boil, then reduce to a simmer. While the water is warming, break the wax into pieces and place it in the soup can. Keep adding smaller pieces of wax until the melted wax reaches to nearly the top of the can. You can turn off the heat at this point, but turn it back on low if the wax gets too hard.

Dipping the candles: To make two candles at a time, measure a piece of wick that is 2.5 times the depth of the pan. Wrap the center of the wick around a pencil several times, so that you have an equal length of wick on either side of the pencil. The wrapping ensures that you have enough space in between the two tapers so they won’t touch as they thicken. I taped my wick to the pencil to secure the spacing.

Dip the wick in the hot wax until it just touches the bottom of the can, and then slowly draw it out. Allow the wax to cool before making your next dip. (I alternated making several pairs of candles at a time.) Note that your wick will come out curved the first couple of dips. After the wax hardens a bit, you can simply straighten it with your fingers. You can also smooth the sides of the candles by rolling them on a piece of parchment paper.

Repeat this process until a candle is the desired width. Allow to dry overnight, trim the wicks, and enjoy!

by Michelle Slatalla
May 19, 2021
Read all recent posts