Beautiful Aegopodium podagraria, native to Eurasia but invasive in the United States, has a flock of common names. The shade-loving perennial I call ground elder is also known as bishop’s weed, goutweed, and snow-on-the-mountain, among others. I encountered it first when I worked at a garden center in Manhattan. A variegated cultivar was stocked, billed as a wonderful ground cover to grow where nothing else would. And it did. And it does. Which is why, when you Google  “ground elder,” the results pour in: Problem Weeds, Weed of the Week, How to Control Ground Elder, Step-by-Step Guide to Beating Ground Elder, What to Do About Ground Elder.

Apart from a dismissive mention of crazy Russians enjoying it in salads, none of the suggested control options offered include dinner. But I’m with the Russians. I will eat it.

Fortunately, it is delicious. 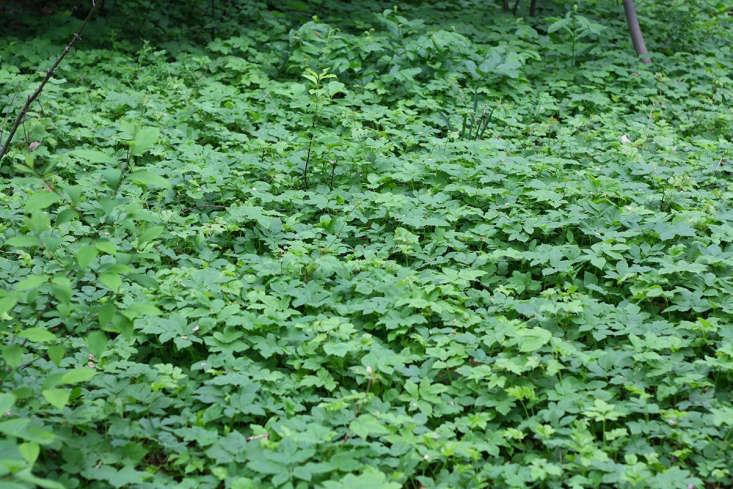 Above: Long after that plant-selling job, I met ground elder again in Brooklyn’s Prospect Park, where I was volunteering to clean litter from a large section of woodland. In the woods a high tide of ground elder stretched as far as the eye could see, a vast green flood washing between the trees.

Introduced via gardens in the 19th century (and garden centers in the 21st), ground elder spreads by rhizomes, forming dense colonies where nothing else can compete. Native saplings and perennials and the biodiversity they represent are shouldered out. 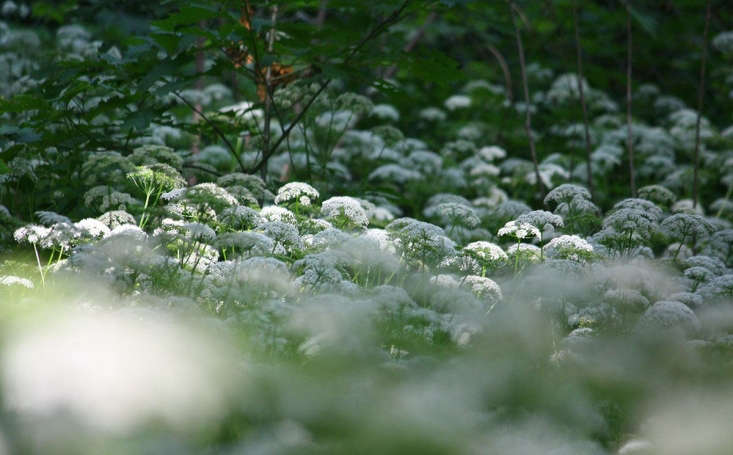 Above: Woodlands are especially susceptible to ground elder invasion because it favors high shade and moist soil. Some states in the Northeast have begun to take action. The plant is banned in Connecticut and prohibited in Vermont. It occurs now in at least 29 states, favoring the Northeastern part of the United States (and Canada) and the Pacific Northwest. Warmer and drier regions have been spared. 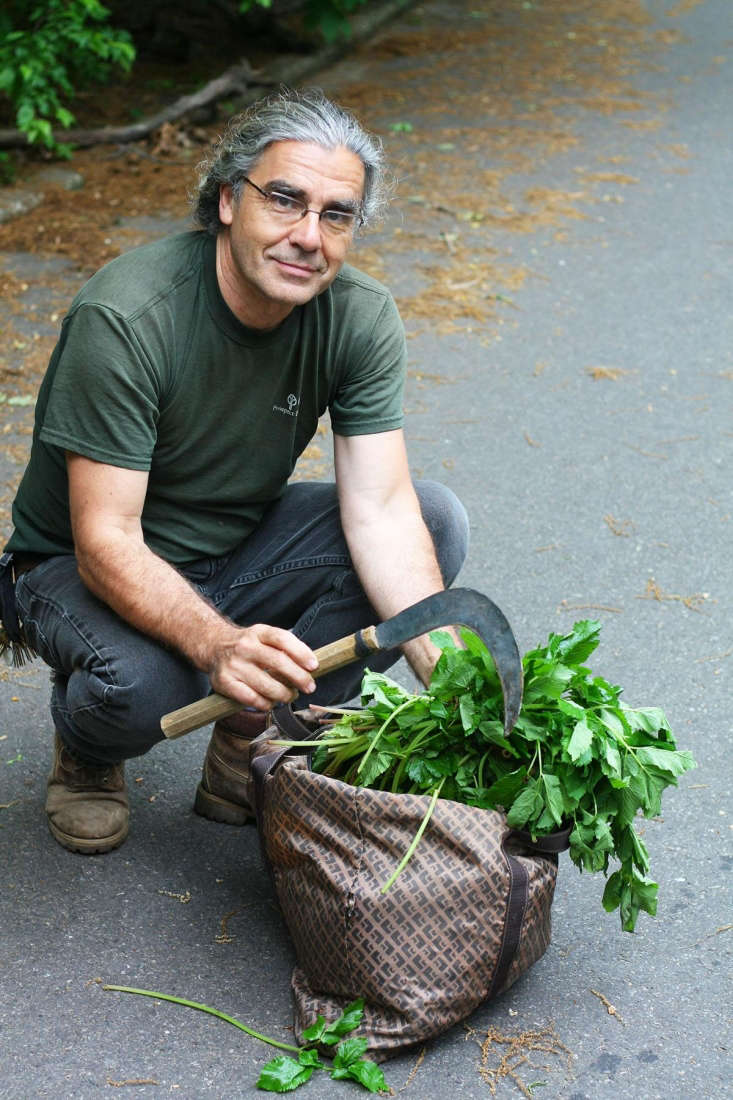 Above:  Removing plants from a New York City park is against the rules, even if the plant is a noxious invasive that is controlled by Roundup, other herbicides, or mechanical means (that is to say, mowing and digging up). While I worked in these woodlands Asian women sometimes came and collected the ground elder to use medicinally (it has anti inflammatory properties), furtively packing it into bags. If found, the foraged items were confiscated by staff. 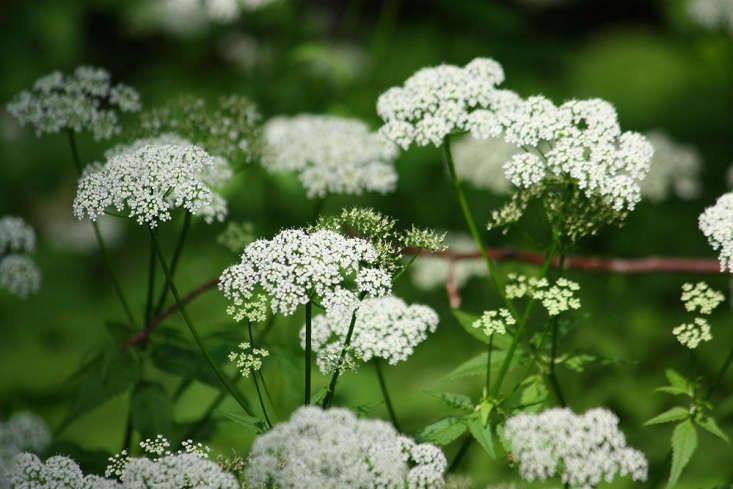 Above: Apart from a long tradition of being used as medicine, one of the reasons ground elder became popular in gardens was for pure ornamental appeal. 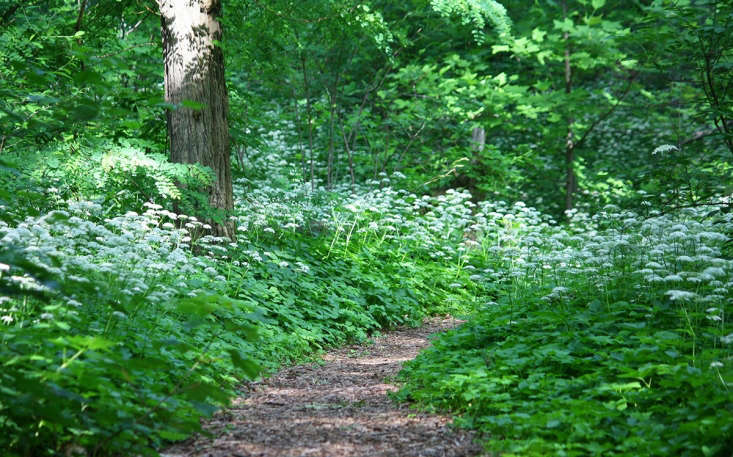 Above: In May and June ground elder bursts into tall white bloom, its wide umbels held on statuesque stems above the dense foliage. This display en masse is appealing. But can you hear the indigenous dogtooth violets, doll’s eyes, cut leaf toothwort, and wake-robins screaming for help? I can. 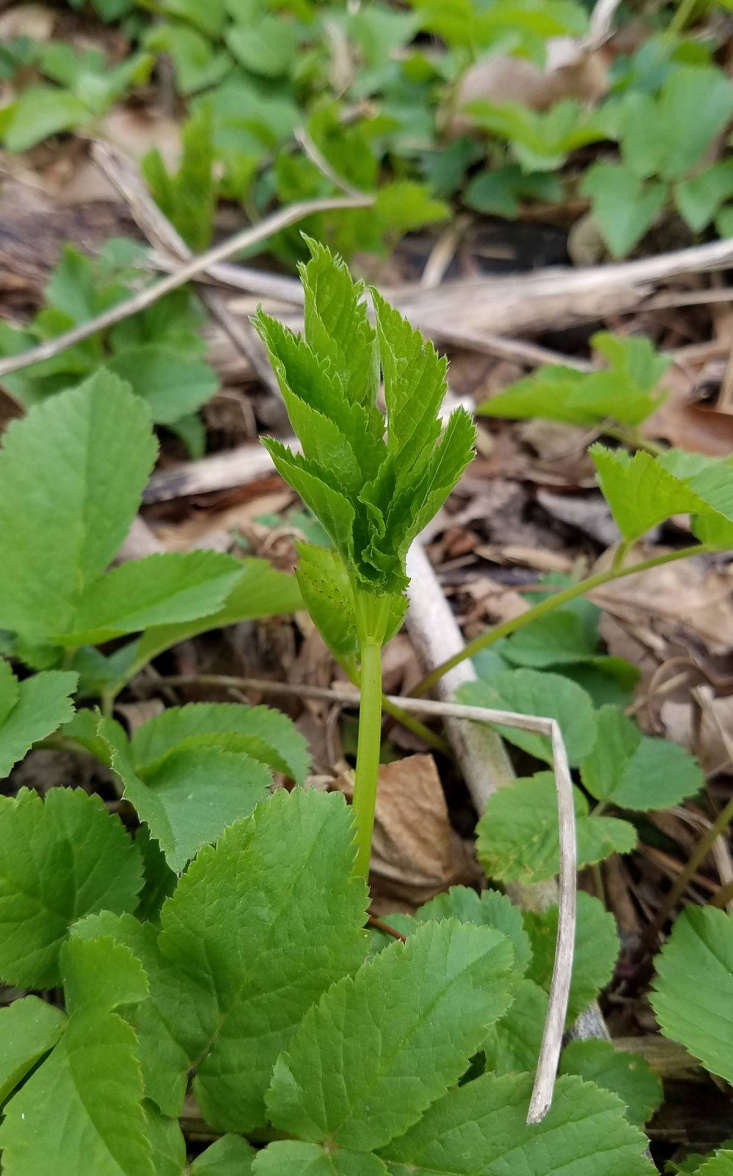 Above: Inspired by the furtive foraging ladies, a few years ago I began to nibble. Ground elder’s tender early spring leaves are delectable. The closest match in taste I can think of is lovage. Or gentle celery. 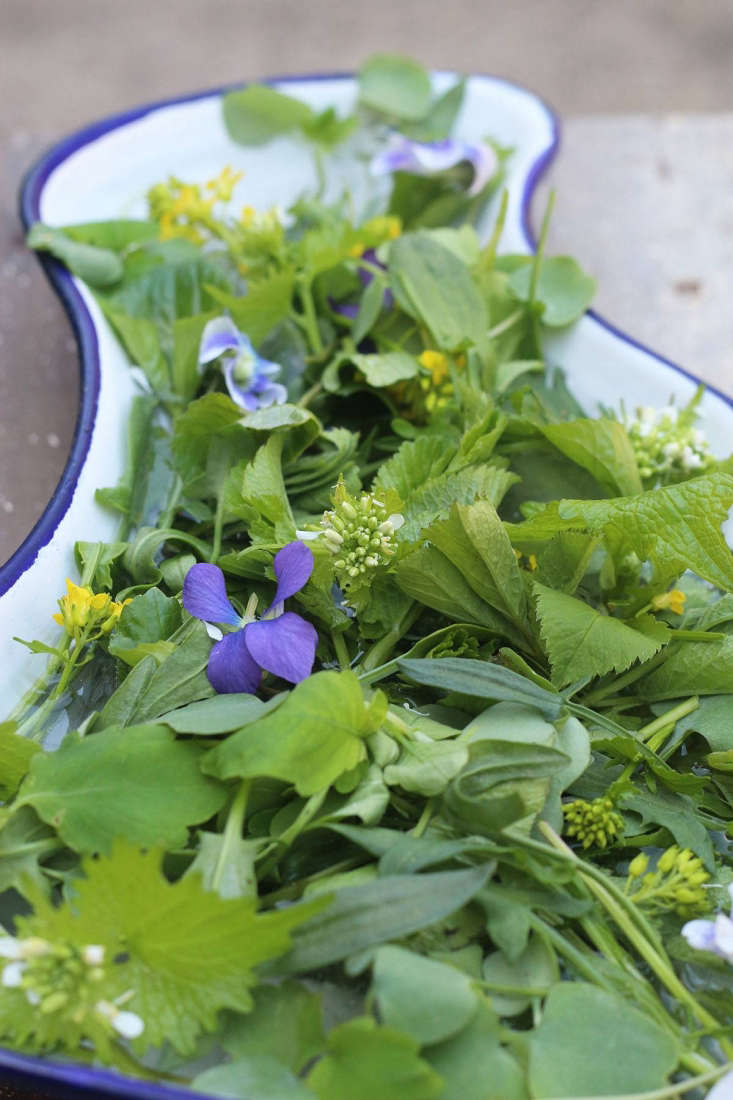 Above: Salads are an obvious  choice for such an appealing herb. In spring I make one that I call Strong Salad. The flavors are bold, and many of the greens are invasive: ground elder, sheep sorrel, garlic mustard. After eating you feel fortified. 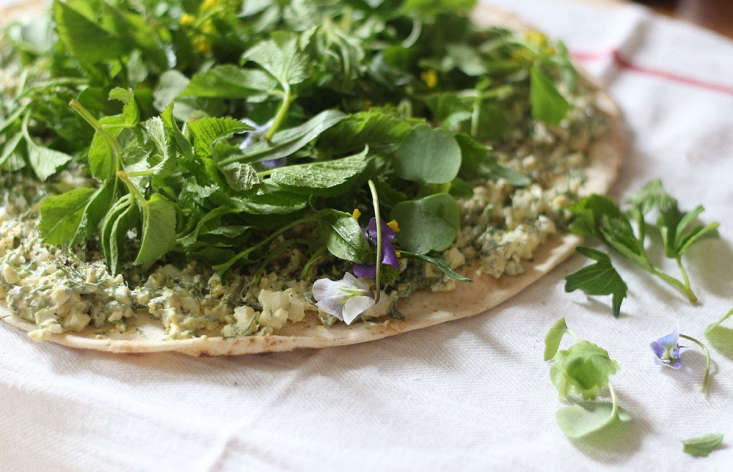 Above: Pile tender ground elder leaves and dill-rich egg salad onto flatbread and roll it up neatly to carry on a picnics. And chop the leaves up into potato salads where the vinegar sings. 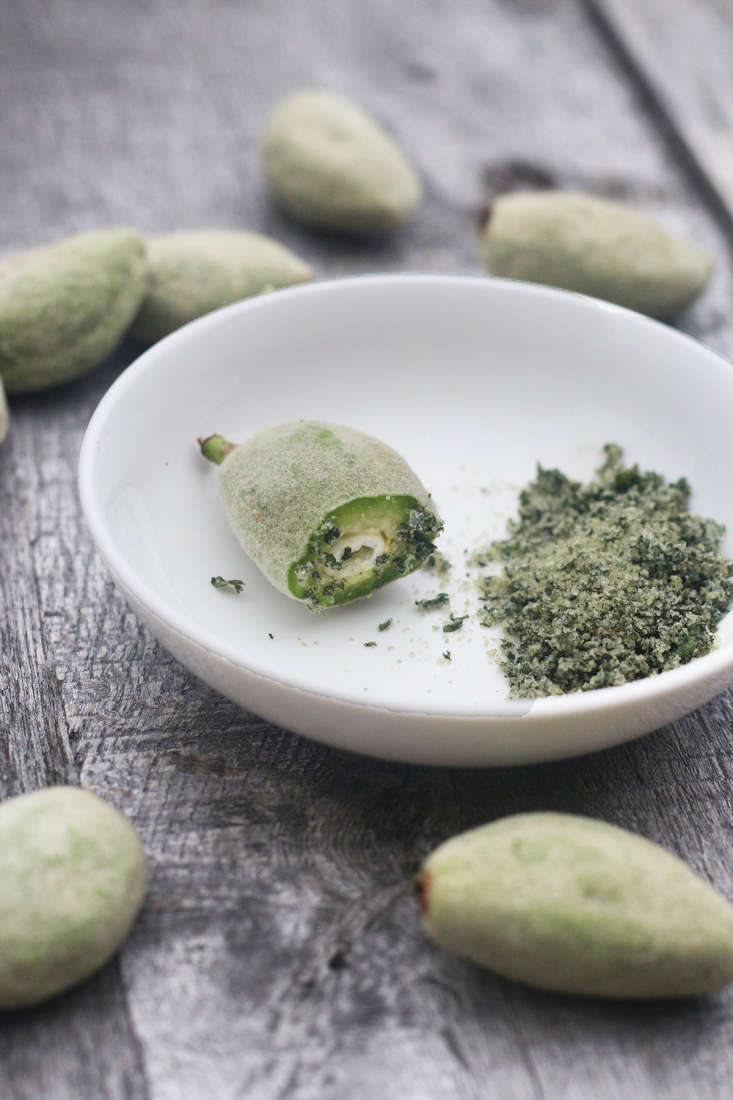 Above: As the leaves grow larger and stronger in flavor in late spring, ground elder salt covers my kitchen surfaces as it air dries. It a piquant dip for everything from green almonds to eggs. It is wonderful on the rim of a sharp cocktail. 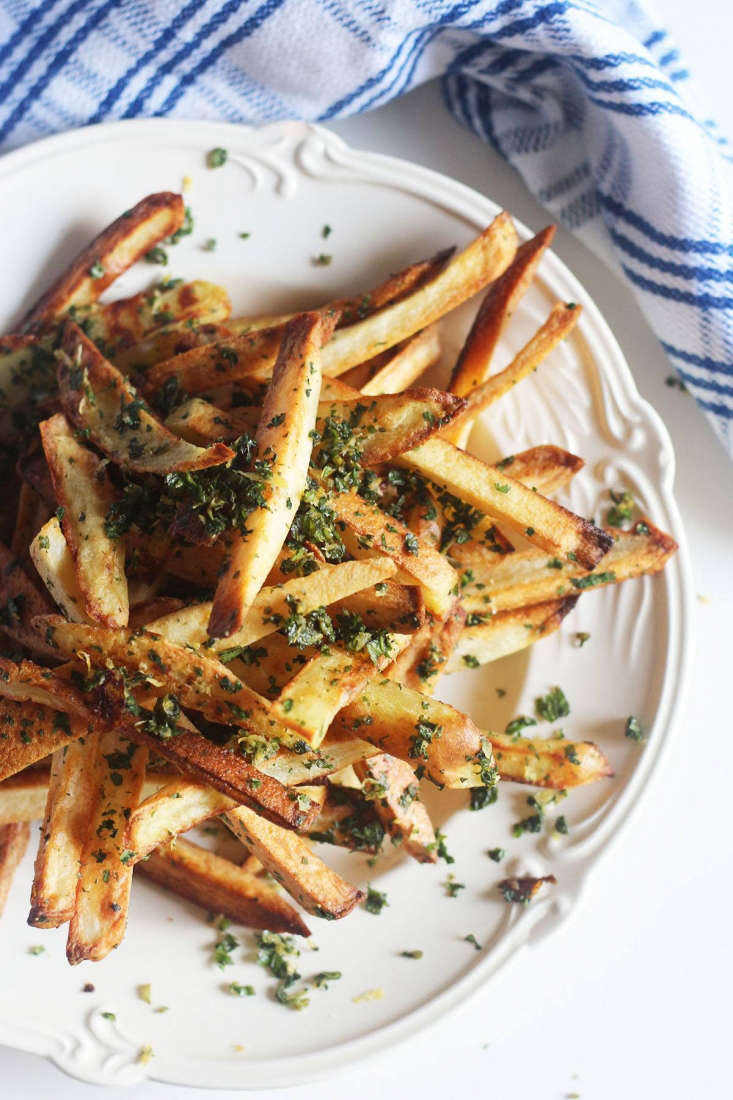 Above: Ground elder gremolata beats parsley, for me. Scatter it onto rich stews or crisp oven chips. 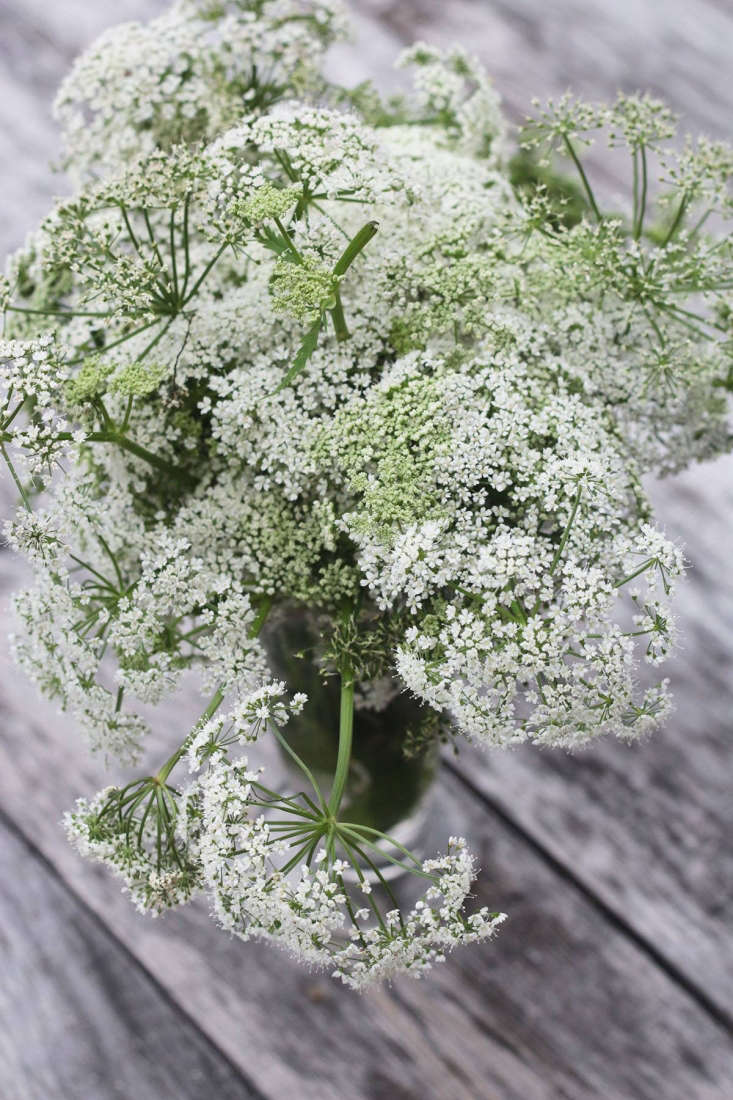 Above: The flowers and seeds of ground elder are used by herbalists for treating, you guessed it, gout. They are said to be diuretic as well as soporific. Clinical trials show that the plant is in fact anti inflammatory and has anti microbial properties. Be careful when deciding to munch on umbelliferous flowers—while the family’s members include edible parsley, carrots and fennel, poison and water hemlocks are deadly close cousins. They will kill you (not to put too fine a point on it).

I prefer the earlier buds, anyway, which are a very good cooked vegetable. 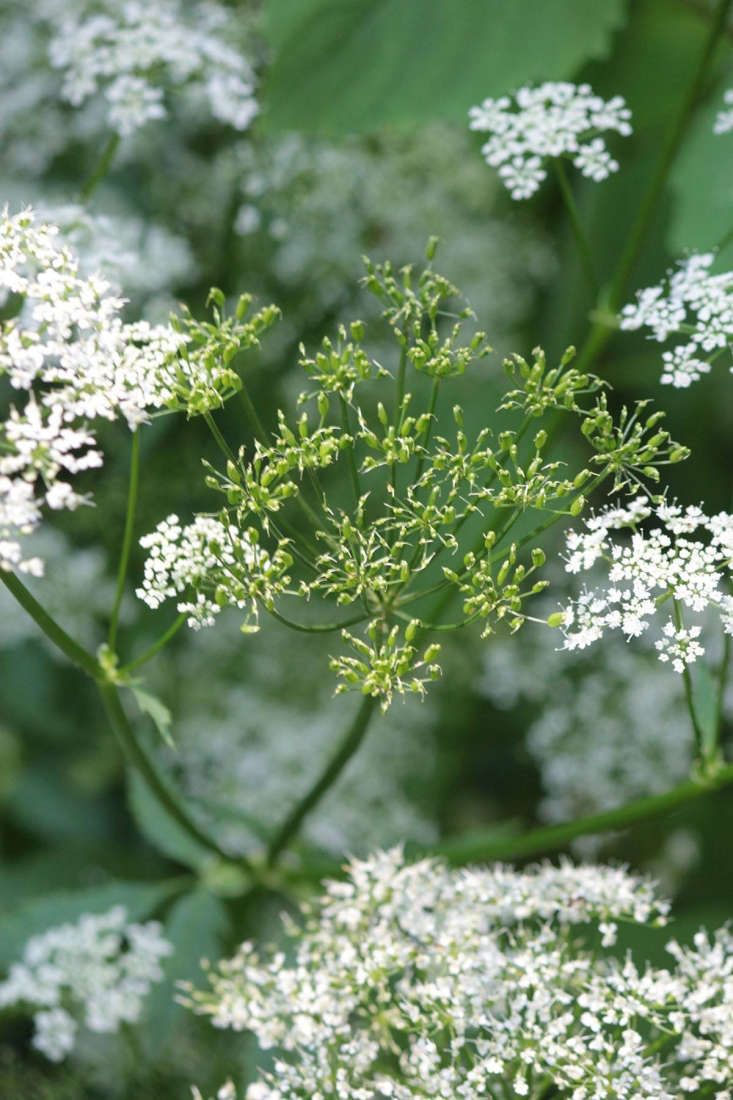 Above: And finally, by the height of summer the green seeds have appeared. I find them useful in relishes and chutneys and collect them like fennel seed. To be on the safe side I use them in moderation. I do not want to fall asleep in my soup. Dry, they turn unpleasantly bitter.

The wild foods cookbook I am working on (it will be published by Chelsea Green in 2018) will include plenty of recipes for ground elder. Earmark your local patches now, and get ready to to shake up cocktails, purée soups, toss salads, and pack potted pigs on picnics.

There is only one thing you should not do with ground elder: plant it.

There is plenty to go around.

N.B.: For more of Marie’s favorite weeds you can eat, see:

Browse the Best Amateur UK Gardens in Our Design Awards

One Day Left to Vote In the 2017 Considered Design Awards