Earth Day 2016 approaches. May we suggest that you celebrate it on April 22 by dining on an invasive plant? What weed should I eat? you ask, with a straight face. Well, it is spring, we answer seriously, and you are spoiled for choice. We’ve already written about dandelions, and then there are garlic mustard, field garlic, burdock, mugwort, chickweed, goutweed, and more. But let’s go right for the invasive jugular: Japanese knotweed.

Read on for a recipe for Japanese Knotweed Hummus.

Photography by Marie Viljoen, except where noted. 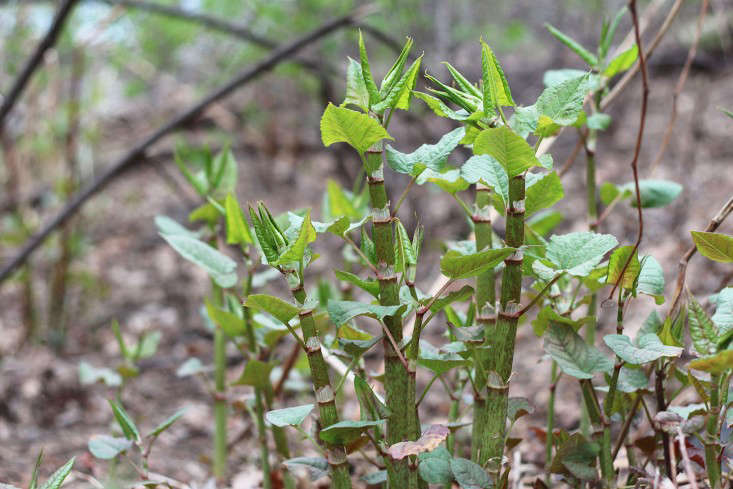 Curse of governments, homeowners, gardeners, farmers, developers, railway companies, airports, and Olympic planning committees. It is a crime to plant it in England. You may not sell your property there if Japanese knotweed grows on it. Stateside, Japanese knotweed is on many states’ noxious weeds list. Michigan and New York have banned the sale, purchase and transportation of the plant, which occurs in 42 states (the arid southwest is exempt). Its dense monoculture colonies decimate native plants by excluding them, and it alters local ecologies. It promotes soil erosion. It chokes stream- and riverbanks. Japanese knotweed shoots can crack asphalt and concrete. 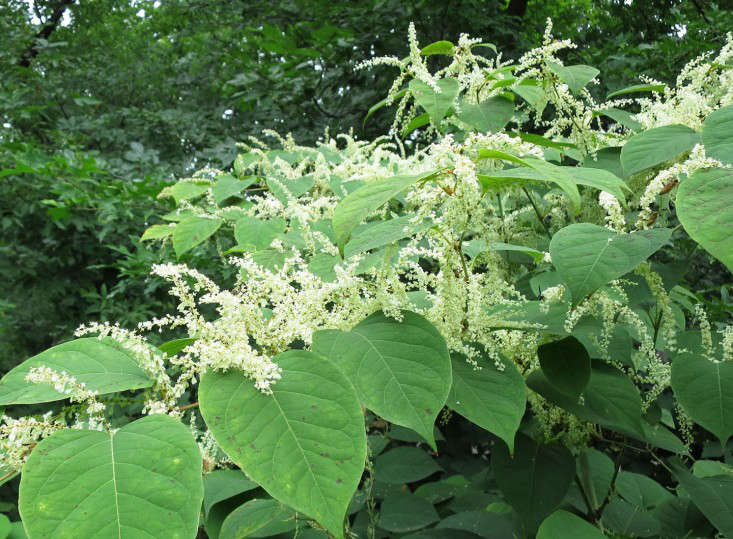 Above: Like so many other problem plants, Japanese knotweed was imported (from eastern Asia) as a garden ornamental, before escaping. Its clusters of ivory summer flowers are scented and attractive. Its jointed stems and bamboo-like growth are graceful. It dies back to the ground every winter and arises magically in the spring.

But this aggressive member of the buckwheat family ran botanical riot in habitats where it had no natural enemies. Until foraging turned mainstream, that is.

Japanese knotweed is usually controlled by herbicides, including glyphosate (Roundup). There is still a dearth of information about the effect of Roundup on human and ecological health. The federal Environmental Protection Agency currently has little negative to say, although in 2015 California’s EPA listed glyphosate as a human carcinogen. France has banned the sale of Roundup, citing it as a potential human carcinogen.

Long term, biocontrol of Japanese knotweed might prove the most effective and eco-friendly method, by introducing a sap-sucking psyllid from knotweed’s native Japan to prey on the plant. 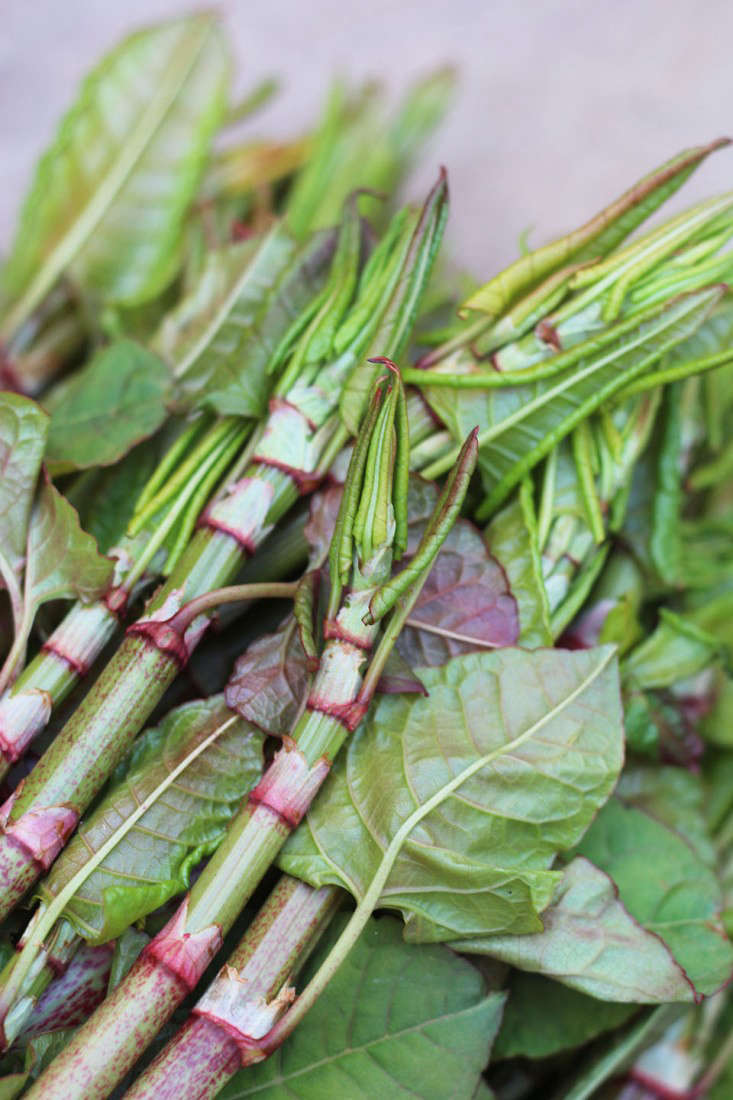 Above: But until the psyllids start sucking full-time, there is another way to tame this floral thug and it is mechanical. Digging up knotweed with a back hoe looks impressive, but is ineffective: knotweed can regrow from a just a small piece of left-behind root. However, the regular shearing of its shoots can eventually deplete the underground rhizomes of energy and can potentially force a clump into retirement. 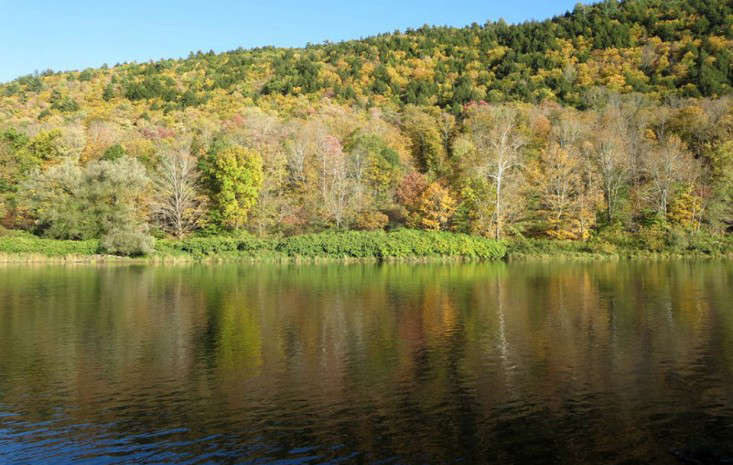 Above: Photograph by Steven Schwarz.

On his acreage on the banks of the Delaware River in Pennsylvania, Steven Schwarz, chief forager at Delaware Valley Ramps, and founder of the Upper Delaware BioBlitz, employs what he calls “the Sampson Approach,” in order to avoid the use of chemicals on the Japanese knotweed that chokes the river edges. “My theory is that cutting its hair weakens it,” he says. “So far I don’t think I’m winning but I’m not losing either, and I have contained the worst patches from spreading.” In one of these patches prized ostrich ferns – a source of edible fiddleheads – seem to be competing with the knotweed, because they now have access to sunlight. Schwartz uses a machete or a weed whacker to attack the colony three times a year, the last just before it sets seed.

But he also eats it. This is—at last—the point of our story: Japanese knotweed tastes good, if you like tart flavors such as lemon, sorrel, and rhubarb. Schwarz says, “My favorite use is the tender shoots, peeled, and then diced into quarter-inch cubes in salads. My customers [chefs, small distributors and CSA’s] use it to make compôtes and jellies or in other baked dishes, and they also use it raw in salads and as garnishes.”

And in northeast Georgia, farmer and forager Michael Hendricks (@farma_cee on Instagram) has begun offering the spring shoots at the Peachtree Road farmers’ market in Atlanta. As the world becomes digitally connected, word is spreading about the culinary potential of this despised plant.

Which brings us to dinner.

Viewing Japanese knotweed as food would transform the expensive-to-control weed into an income booster for landowners and foragers, provide cooks with a new and versatile vegetable, spare the environment some of the effects of mass herbicide application, and help to control the plant by creative mechanical means.

Whip out your pruning shears or paring knife and get slicing. Or invite some local foragers over to de-shoot your knotweed clumps for you. Maybe they’ll cook you dinner. 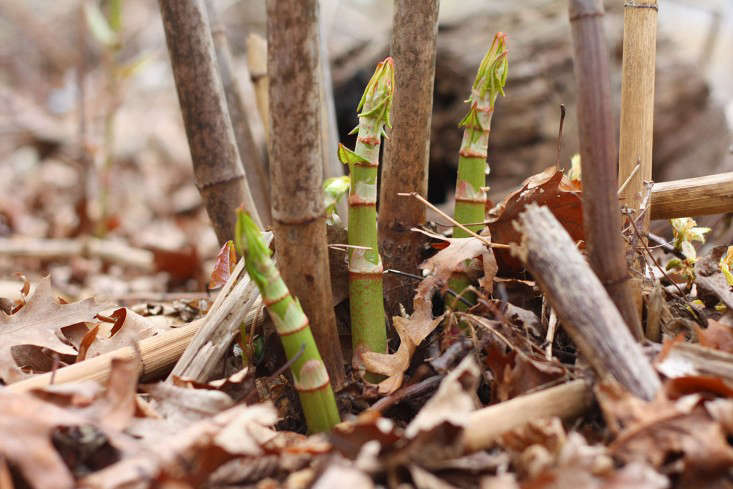 Above: The choice edible part of Japanese knotweed is its young shoot, which resembles an asparagus spear. The stoutest shoots are the most tender and juicy. Skinny ones tend to be fibrous. These tart stems are stuffed with resveratrol, the antioxidant polyphenol touted for its anti-inflammatory effect. Japanese knotweed (from China and Japan) is the leading source of resveratrol in supplement form. 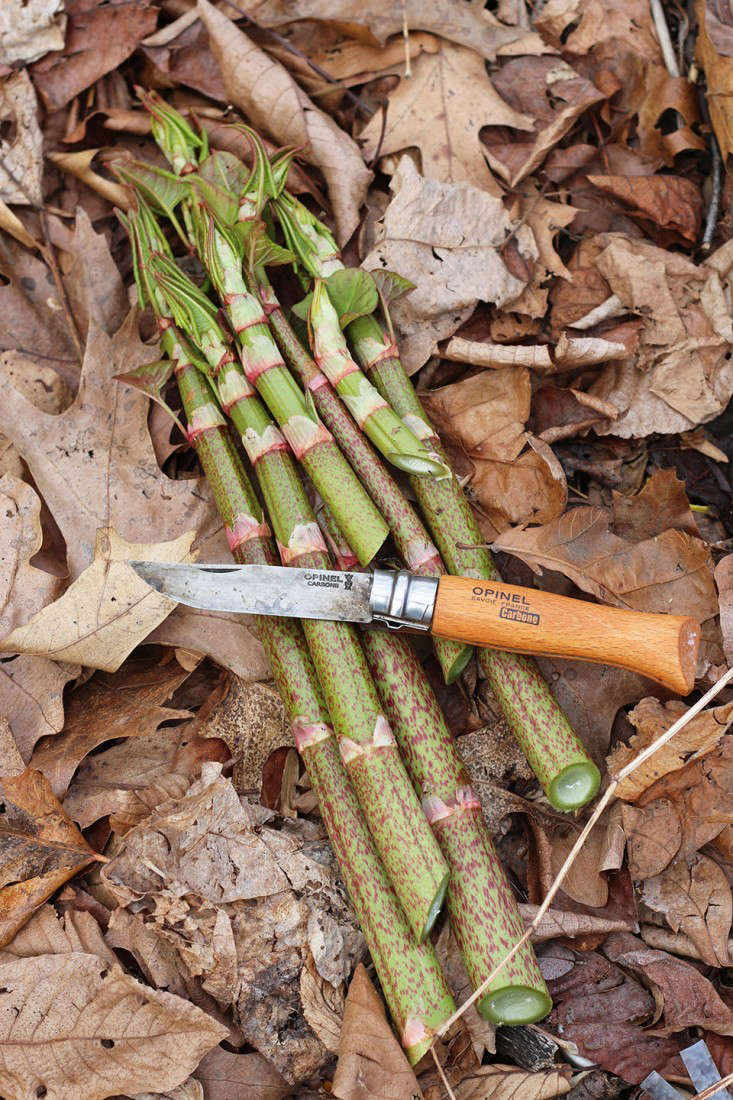 Above: To harvest the shoots, choose a spot where the previous season’s old canes (dry, brown, and hollow) stand untidily. If there are none, the chances are good that the clump was sprayed the year before. Slice the fat green shoots off at the base and carry them home. 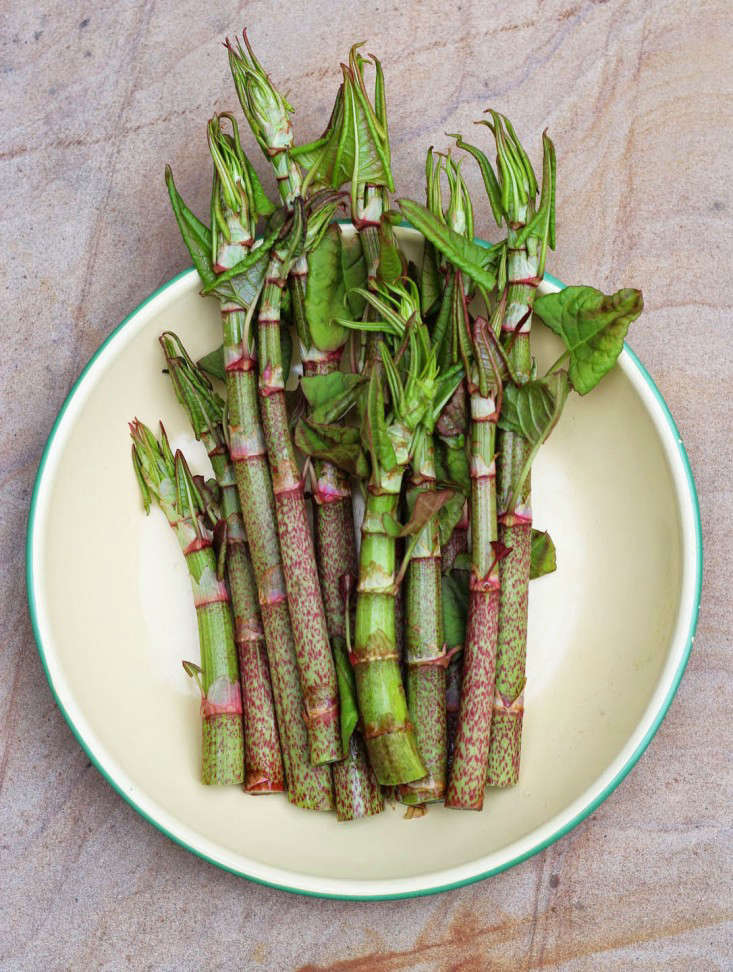 Above: When the shoots are very tender, you can use the whole stem. Peel tougher stems and discard the joints between each hollow section, as they can be tough. Raw, they are very sour. Imagine licking a cut lemon. 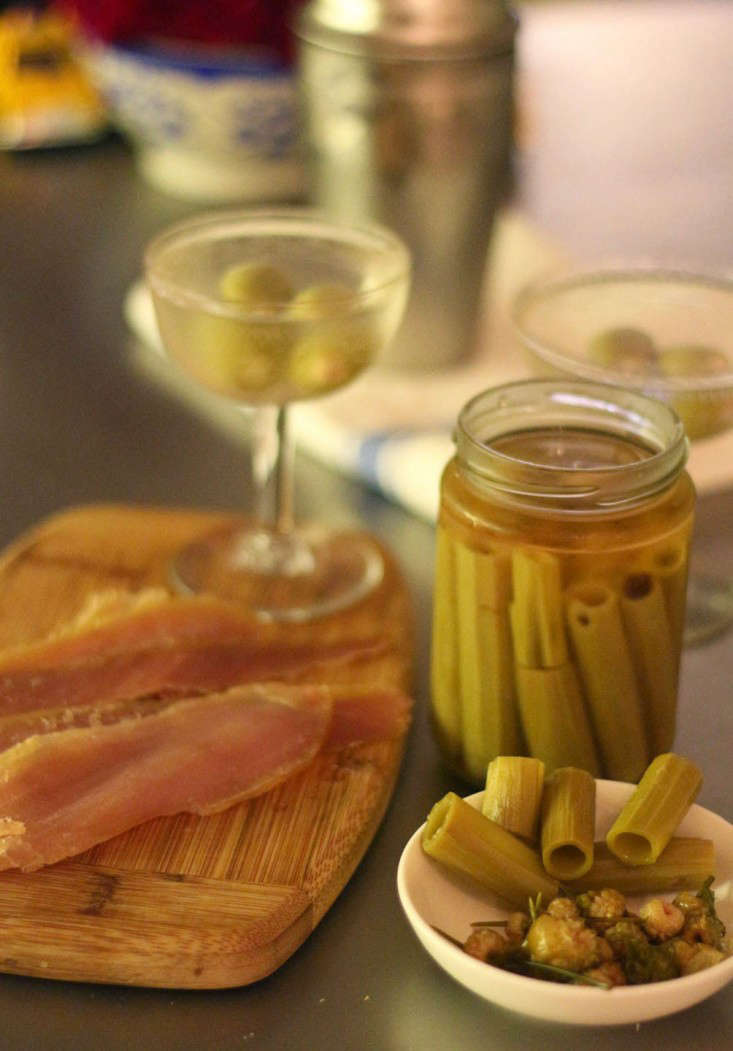 Above: Pickle the stems, using your favorite recipe (I use 50/50 vinegar and water, adding sugar, salt, and allspice berries). These are good with Russian-style zakuski in winter when spring is a memory. 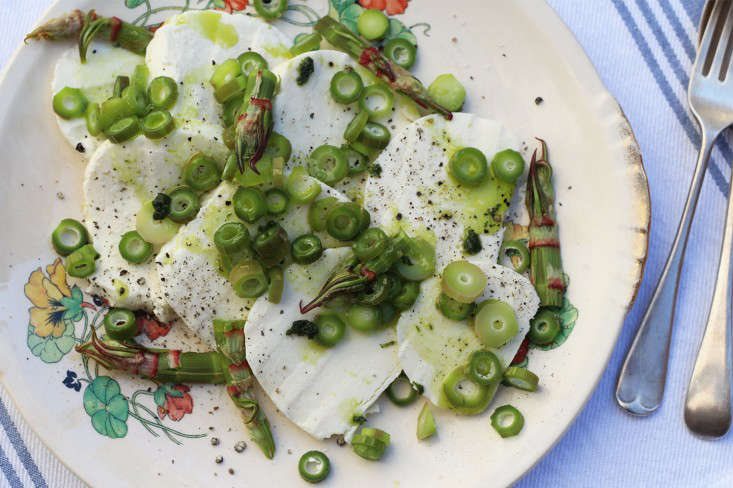 Above: Or cut them thinly and scatter across creamy burrata or mozzarella, sliver them into salads and toss them into hummus. 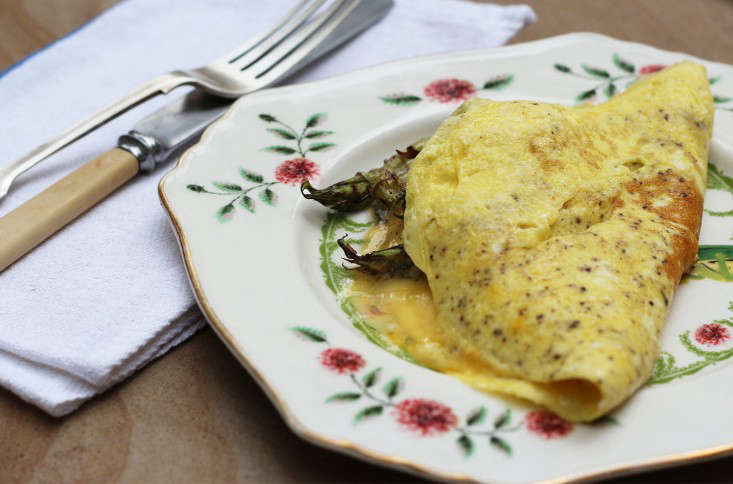 Above: Cooked, the stalks are mellower and soft, and reminiscent of sorrel. They work well with anything creamily bland, from dairy cream to coconut milk and eggs. Japanese knotweed is delicious in curries, in a cream-and-mustard sauce for chicken breasts, in risotto, slow-cooked in pot roasts with the last of the winter root vegetables, whipped into mashed potatoes, roasted with baby whole potatoes, and puréed into leek and potato soups. Many foragers like to use knotweed like rhubarb (although I find it more vegetal in flavor). Turn it into crumbles and combine it with strawberries in pie. 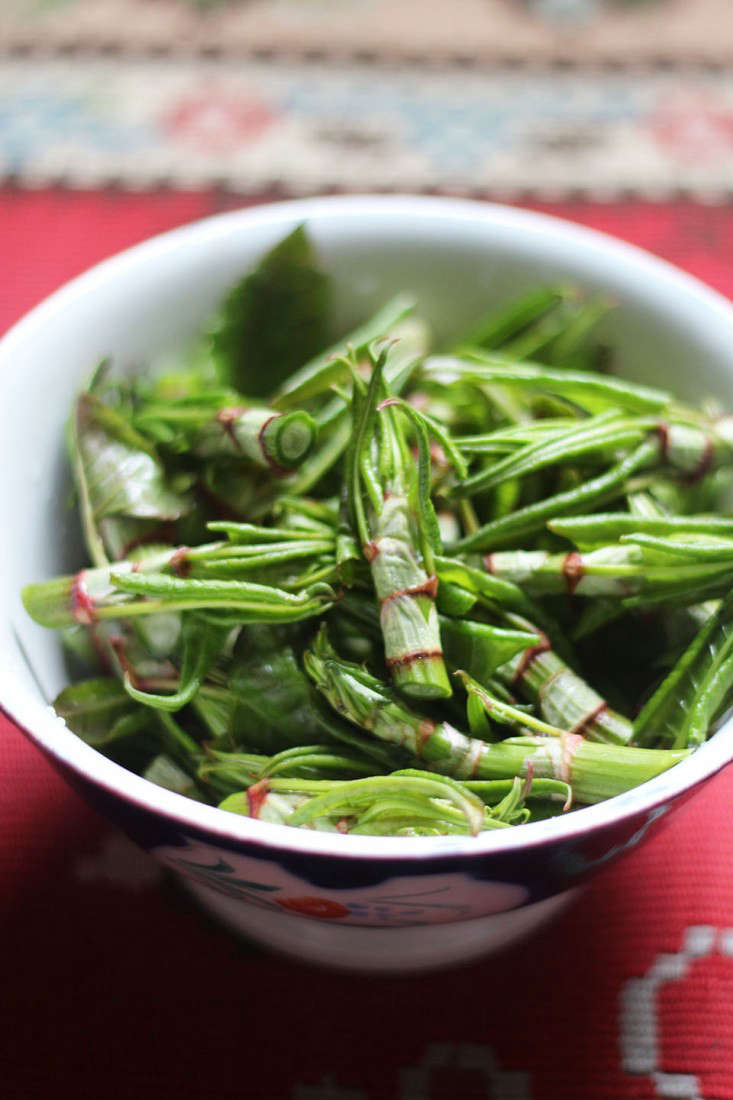 Above: After the stems have matured, the young unfurling leaf tips are still good to eat, with more crunch than the melty, cooked stems. Sauté them briefly to add to omelets, to accompany spring meatballs, as a green stew with fava beans, or as a tart side to a rich main dish. 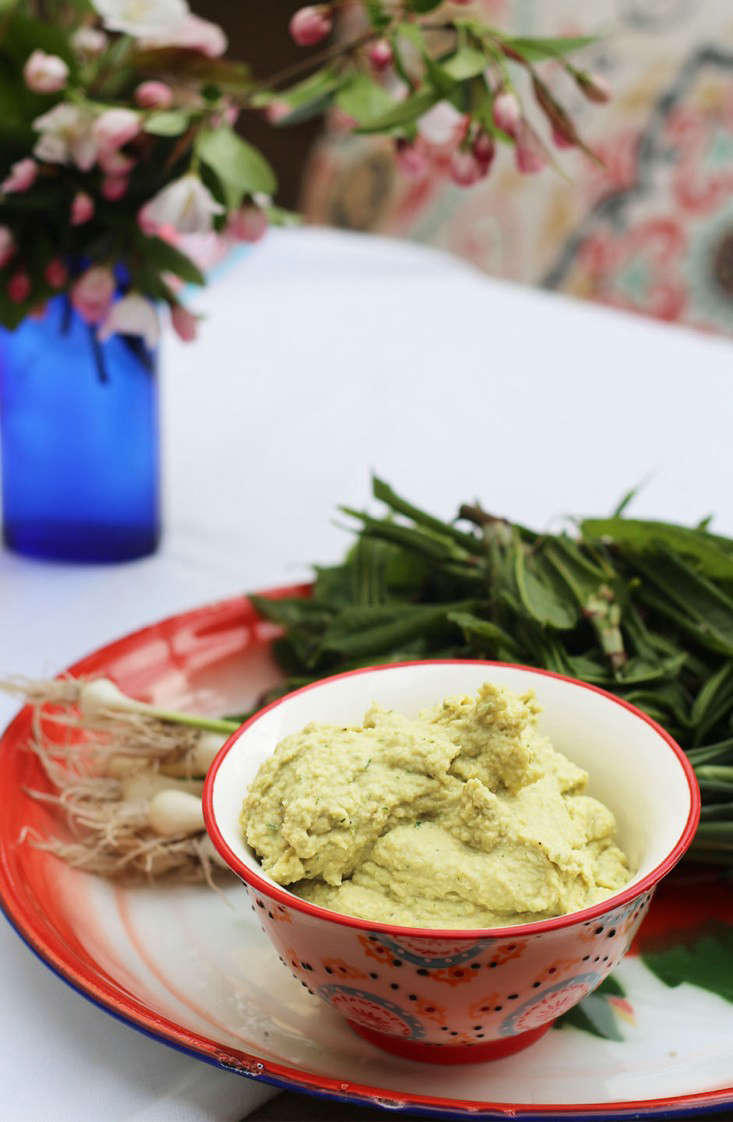 *Prepare the Japanese knotweed stalks by cutting them at each joint and discarding the joints (they are tough). Peel the thin red-spotted membrane from the stalks (a little like pulling the strings off celery). Slice the stalks into rounds.

Place the chickpeas in a food processor and pulse until roughly chopped. Add the knotweed, tahini, field garlic or garlic cloves, and the salt. Process again. Finally add the water and process until you have a very smooth and creamy paste. Taste, adding a little more salt if necessary. If the paste is still too thick, add more water.

Weed Wisdom: What 10 Common Weeds Are Trying to Tell You