Once, in France, I walked on the lawn of a château in Haute Savoie. A familiar but unexpected fragrance rose from beneath my feet. I looked down. In the grass I saw thyme, cropped short. There was also dead nettle, and dandelion. In some places salad burnet had resprouted after being shorn by a little tractor that kept everything clipped.

Now this, I thought, is a lawn.

In my subsequent foraging life I have learned that what one culture calls a weed another calls welcome. Here are nine misunderstood plants (I call them PUPS: Previously Undesirable Plants) that we should be eating, rather than spraying into submission. 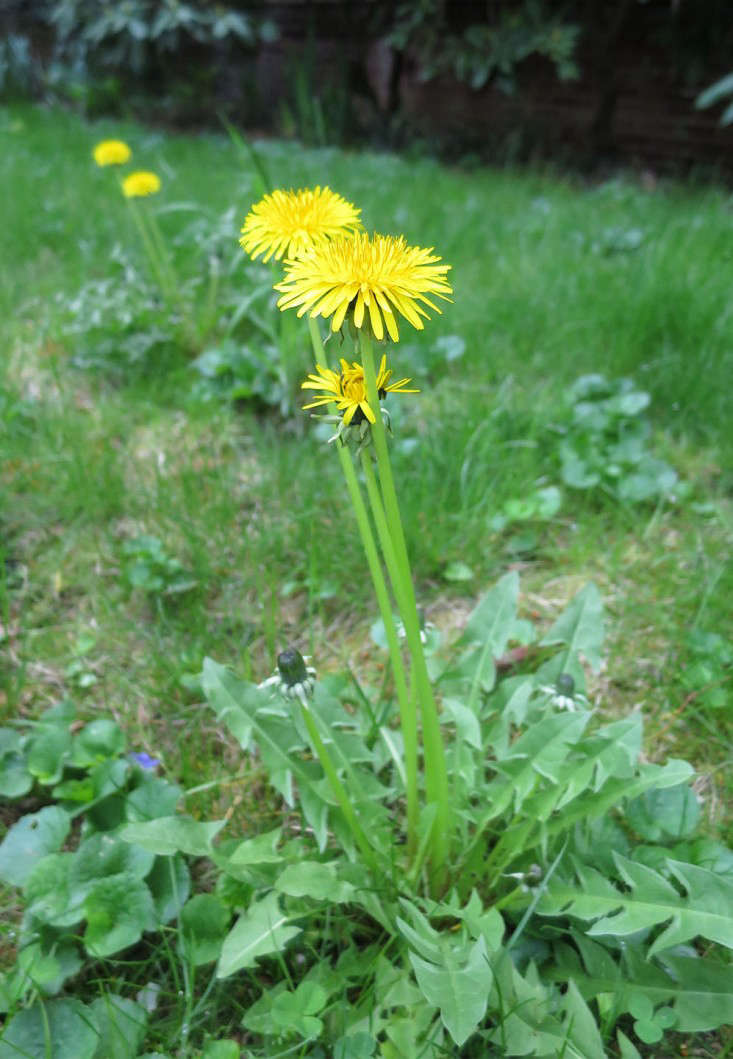 Above: In the knife-edge between winter and early spring one of the nicest vegetables is the dandelion (Taraxacum officinale) crown, dug still attached to the youngest leaves (what forager Leda Meredith calls “yard squid” because of the tentacled resemblance): wash very well, cut off the root, and eat raw, tempura’d, or sautéed. Delicately bitter dandelion leaves are the pis-en-lit backbone of salade Lyonnaise (and great as bruschetta). Plants that grow in the shade are less pungent than those in full sun. The bright flowers in late spring make the classic dandelion wine, naturally fizzy after a few days of fermentation. 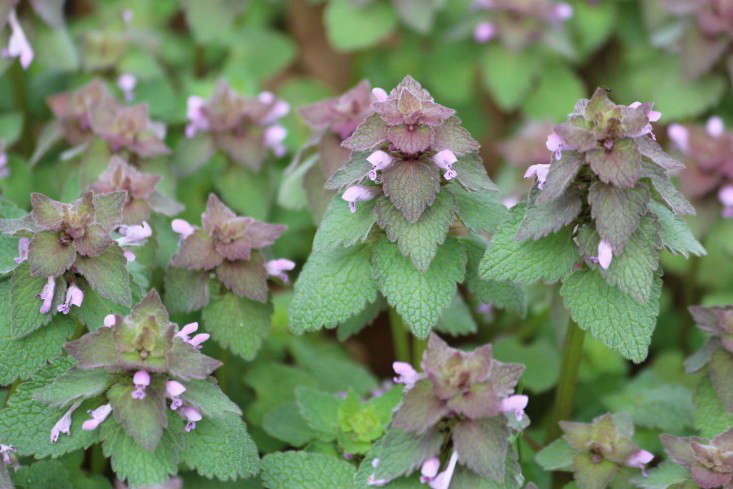 Above: Purple dead nettle (Lamium purpureum) is a pretty, purpled plant that grows at foot-height in late winter and early spring, a lowly cousin of grander garden cultivars. This wild plant adds a frosting of color to lawns, is good for bees, and, well, it’s a good side dish. While dead nettle does not pop with flavor (but does spinach? I ask you), it is heartily substantial when cooked and spiked with lemon juice, soy, sesame oil, or chiles, and makes an earthy soup. This low-lying invader should be an edible rite of early spring. 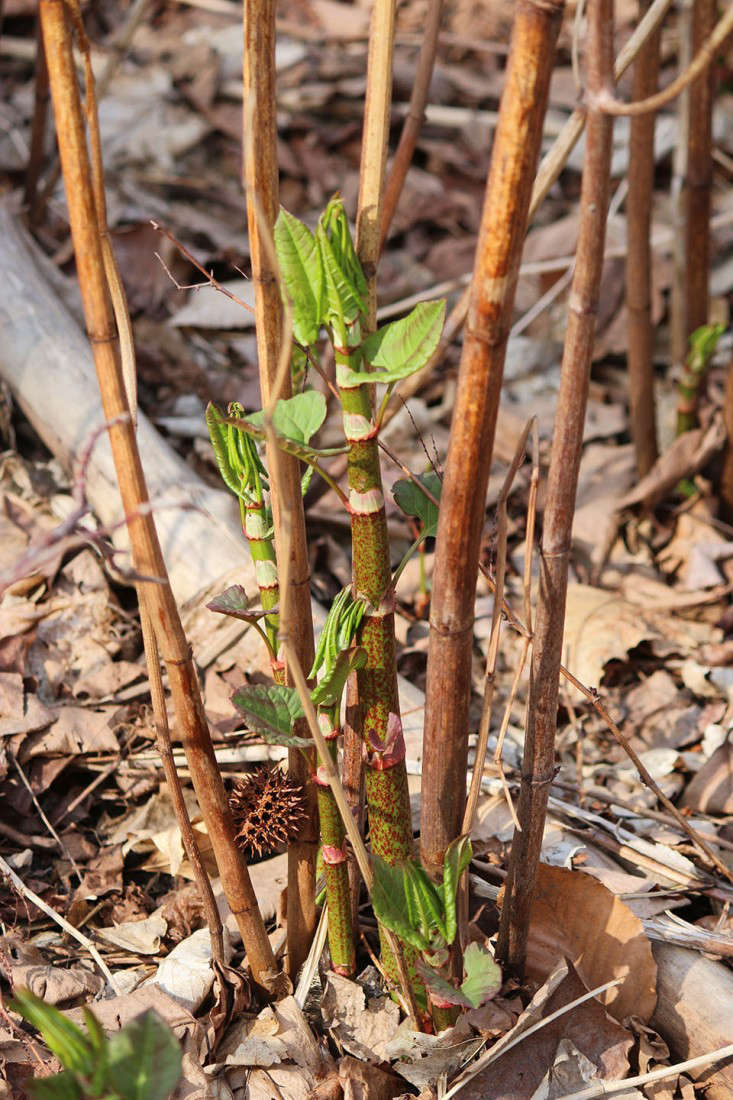 Above: There is a caveat with Japanese knotweed (Polygonum cuspidatum): DO NOT PLANT IT. This is a super-invader. Once established, it is almost impossible to eradicate. Instead of spraying it with Roundup, pick all the emerging young shoots, in early spring. These shoots, as well as the tender unfurling leaf tips, are a deliciously tart vegetable, similar to French sorrel in flavor. Use them cooked in stews and omelets, raw in slices on creamy mozzarella, or turn them into pickles. 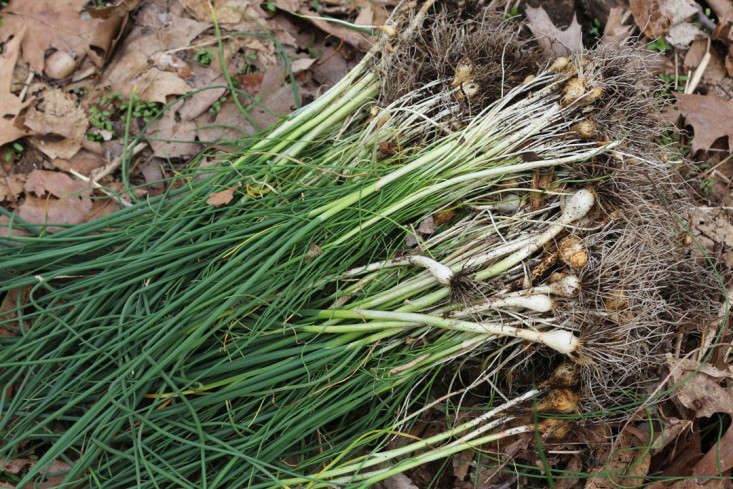 Above: Allium vineale is the unappreciated relative of the chives we pay for. Yet its leaves taste wonderfully oniony, and its small bulbs are as pungent as the child of garlic and scallions. Collect the leaves any time you see them (late fall into early summer; in late summer the plant lies dormant and is invisible) and pull the fattest bulbs in mid spring. Use them as you would chives, garlic, and shallots. 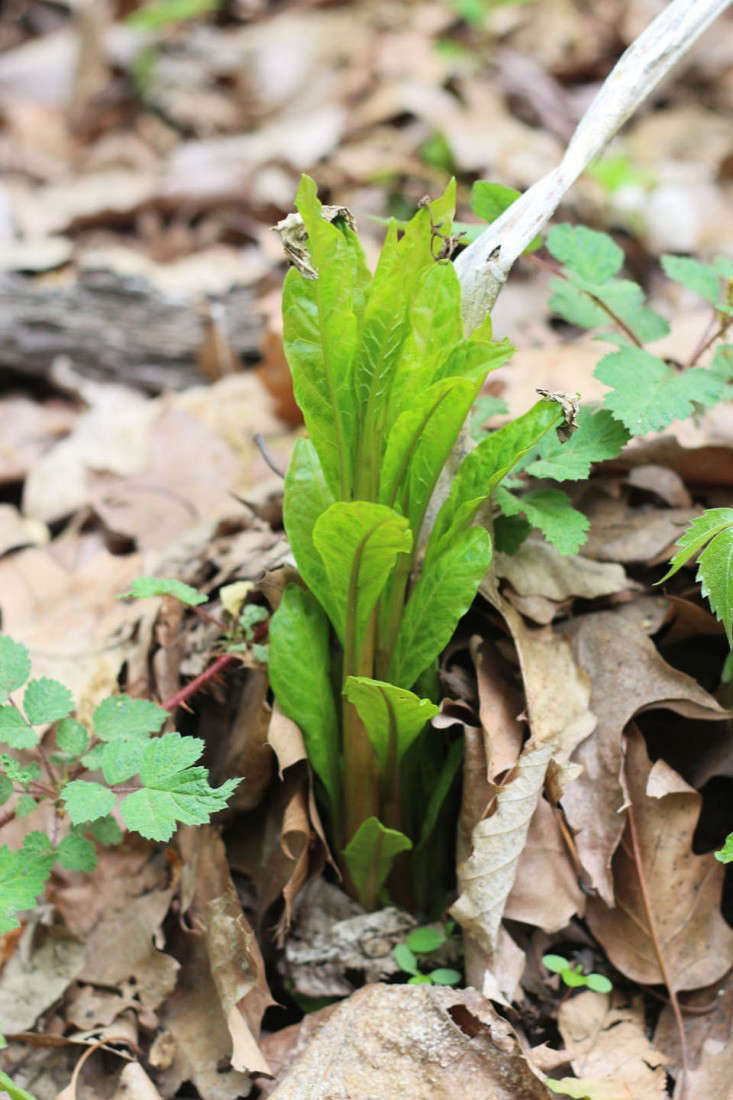 Above: Pokeweed (Phytolacca americana) is conspicuous in early fall when it is shrub-sized and dripping with glossy fruit hanging from hot pink stems. Ignore the fruit (it tastes bad and the seeds are poisonous) and do not eat any part of the mature plant. Instead, collect the tender young green growing shoot, in springtime – it is delicious. These shoots must be cooked. Drop into boiling water for a minute or fry as the Southerners do in a coat of egg with crumbs or cornmeal. You can treat poke as you might green beans or asparagus. I love it in spring vegetable stews. 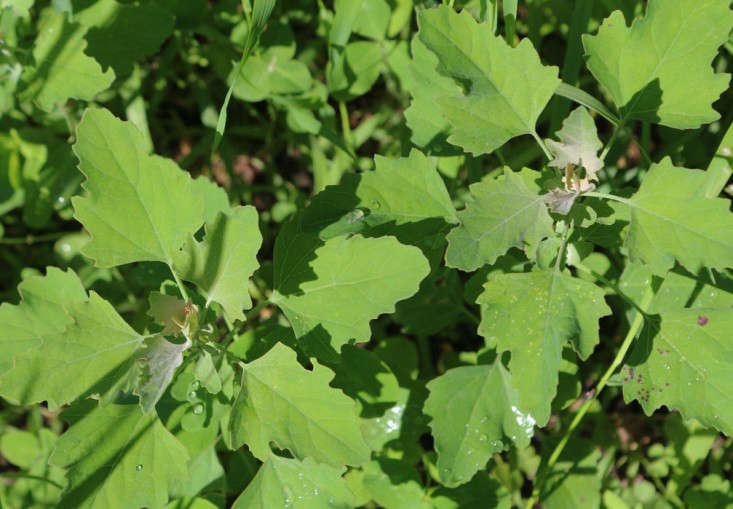 Above: In summer, when cool weather greens retreat, anticipate lambs quarters (Chenopodium album and other species), a heat-tolerant relative of quinoa. While the youngest stems can be eaten, it is easiest to strip the powdery leaves from the older stems and cook them by steaming, or wilting with some water or oil. They can be used like chard or spinach, though I find their texture more appealing. Lambs quarters are highly nutritious, and even the seeds (a pseudograin) can be cooked and eaten. 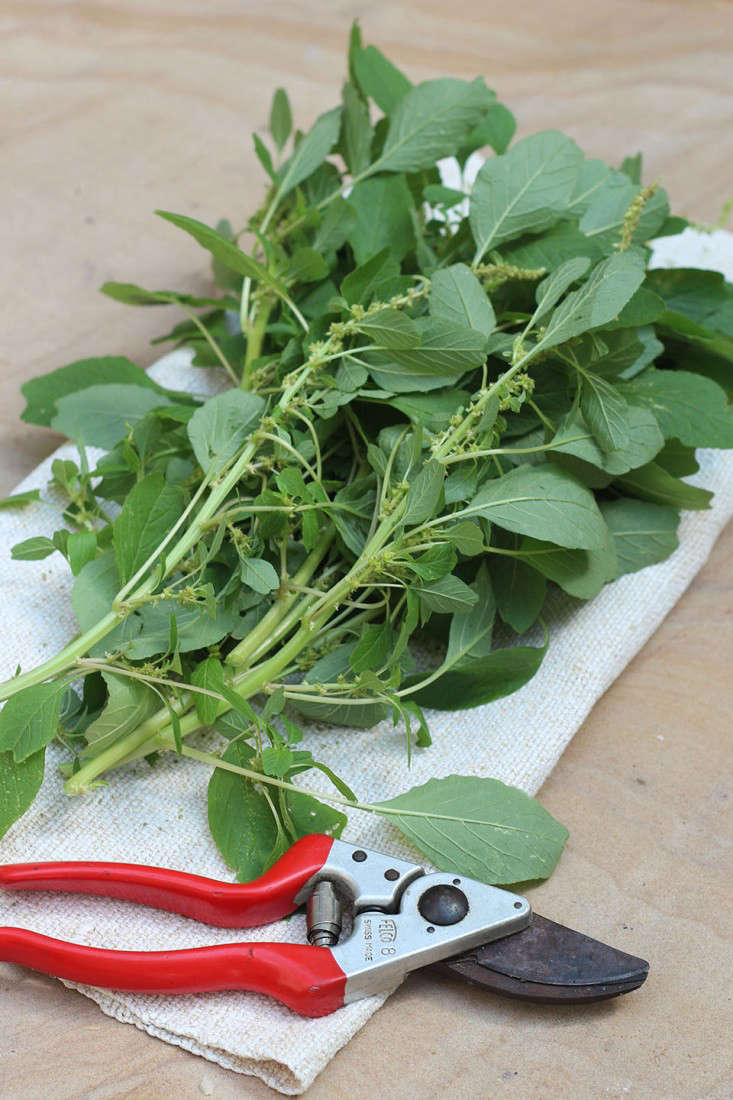 Above: Garden amaranth (Amaranthus retroflexus and other species) is also called pigweed, which is not fair. A garden volunteer when the days are long, it is a heat-tolerant vegetable that we should welcome rather than banish from our summer kitchen gardens. West Indian callaloo is a relative, and the tall amaranths that give us the sought-after gluten-free seeds are another. Amaranth is best cooked and is similar in texture to lambs quarters. Turn it into green tarts, toast toppings, and vegetarian lasagna when local spinach is out of season. 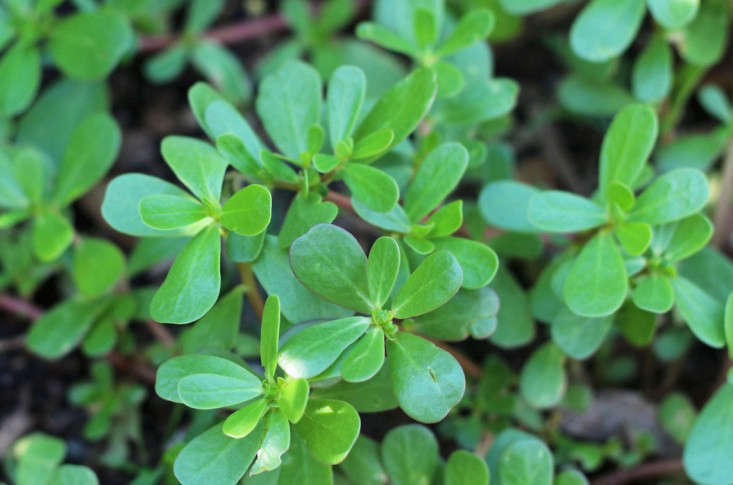 Above: Succulent and tart, heat-loving purslane (Portulaca oleracea) is chart-toppingly high in omega-3 fatty acids and is making its way to famers’ markets, at last. Its texture is best raw, when it remains crisp: add it to salads, yogurt dips, or at the last minute to a bowl of hot new potatoes. Purée it for raw green gazpacho. Cooked it adds a thickness to stews in the way that filé does to gumbos. 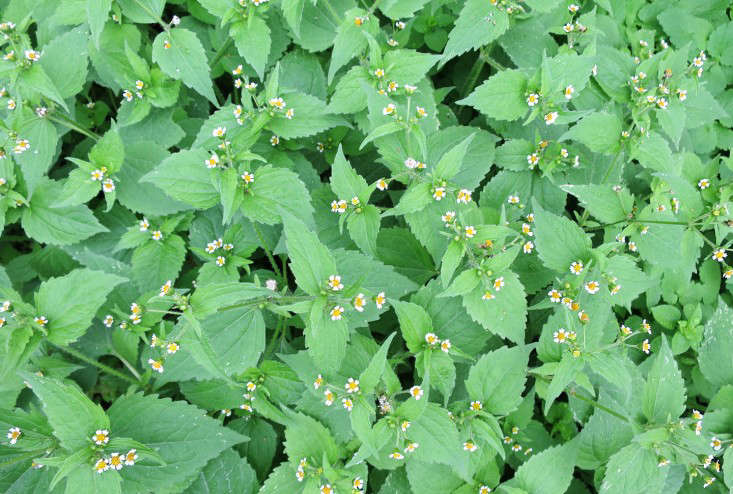 Above: Galinsoga parviflora appears almost overnight in summer gardens (hence the common name quickweed). The trick is to cut the plants down or pull them before those tiny white flowers set seed. In Colombia quickweed is known as guascas, and is sold in supermarkets by the bunchful, an essential ingredient in the chicken stew called ajiaco. The youngest leaves taste like pea greens, but I prefer to cook them, or the texture is a little furry. Dress the cooked guascas with olive oil and lemon, purée them in a cooked pesto, or substitute them—yet again —for chard or spinach in any (free!) summer dish.

As spring approaches, think about what you want to keep in the garden, and why, and then sleep on it. Book a wild foods walk with a local forager, and discover more about these and many other edible plants, growing beneath our feet. I’ll be leading a series of Wild Food Walks in and around New York City this spring; for more information and dates see 66 Square Feet.

Container of the Month: New Life for Old Plants