In the United States most gardeners throw purslane out when it infiltrates their domain, which seems a waste; the sprawling semi-succulent boasts the highest-yet-measured levels of omega-3 fatty acids in a plant. In my vegetable garden I transplant opportunistic purslane volunteers into tidy rows.

There are many ways purslane can be enjoyed, cooked. But in the unseasonal warmth of September here in New York City, prolonged oven heat has zero appeal. Read on for 10 ways to enjoy this healthy and appealing green raw, omega-3’s happily intact.

Photography and food by Marie Viljoen. 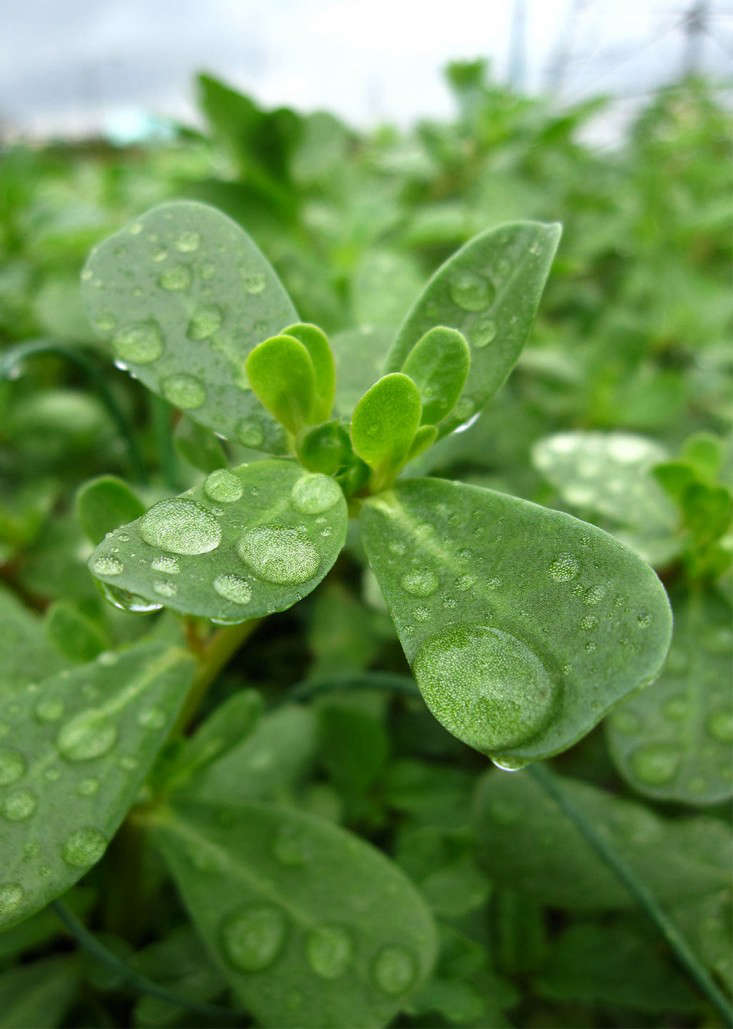 Above: Purslane’s flavor can be variable. Time of day matters for harvest, writes John Slattery, author of the new book Southwest Foraging ($21.20 from Amazon): “If you gather it in the morning it will have more malic acid, and therefore be tangy in taste. Gathered in the afternoon it will be sweeter in taste, as the malic acid is transformed into glucose.” 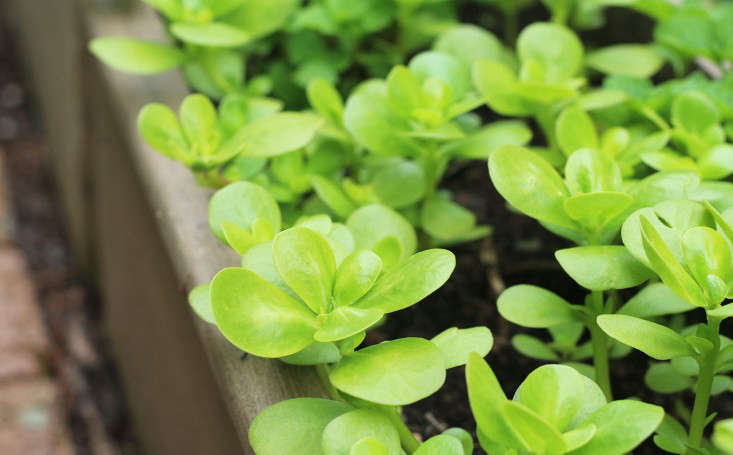 More seed companies are offering purslane for sale. Golden Purslane has fatter leaves and a squatter habit than common purslane: $2.39 from Botanical Interests.

Other Americans know better than most US gardeners: verdolagas (Spanish for purslane) are appreciated in Mexico, and routinely eaten.

Native Americans knew about purslane and used it fresh and cooked. On the other side of the Atlantic Romans devoured purslane, BC. It remains a well-known vegetable around the Mediterranean. But the common purslane we know as a garden weed has uncertain origins. Asia? North Africa? And while it is thought to be a post-Columbian immigrant to North America, archaeological records have shown evidence of its seeds and pollen here as far back as AD 750. 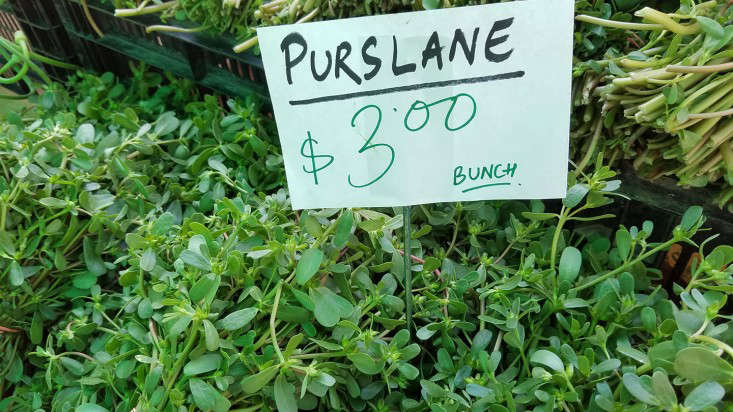 Above: Increasingly, purslane is showing up at farmers’ markets in late summer. When my own stash becomes too leggy, that is where I find a fresh supply. 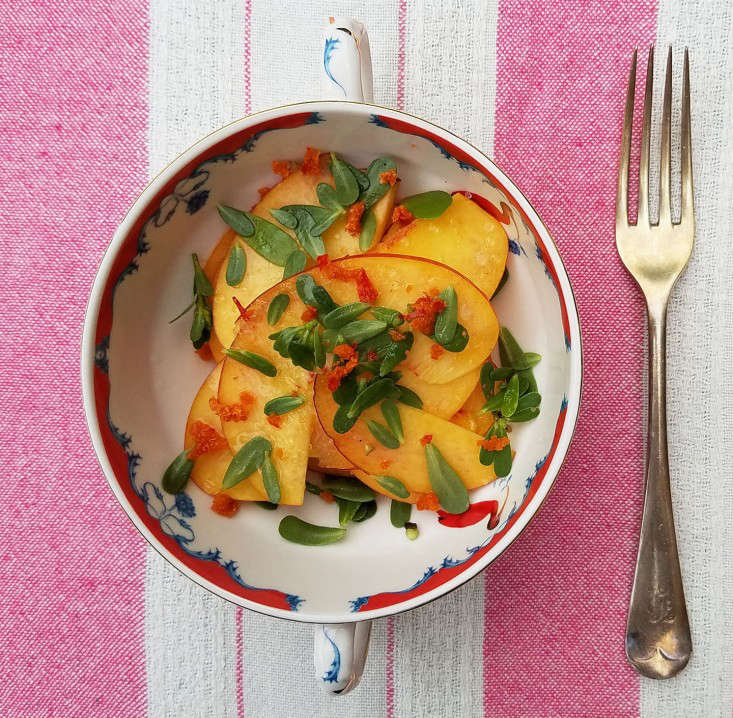 Above: Slice a fresh, ripe peach or nectarine into thin pieces, dress with lemon juice, fresh purslane leaves, and a sprinkle of heat in the form of chiles. I keep yuzu kosho on hand – the yuzu zest and chile accentuate the sweet nectarine.

Purslane with Beets and Greek Yogurt 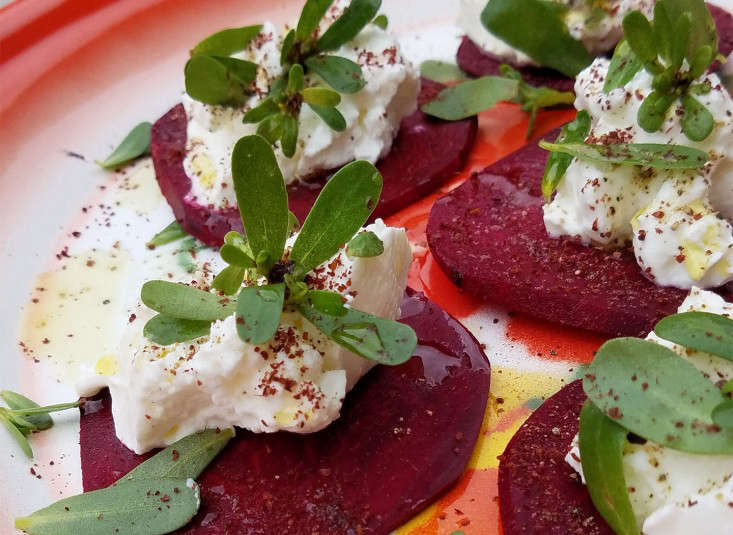 Above: It is hard to avoid the term superfood when thinking about raw beet topped with purslane. I quick-pickle beet slices in a solution of one third vinegar to two thirds water, with salt and sugar to balance. Top the drained beet slices with Greek yogurt (or labneh) and fresh purslane, and drizzle with good olive oil. 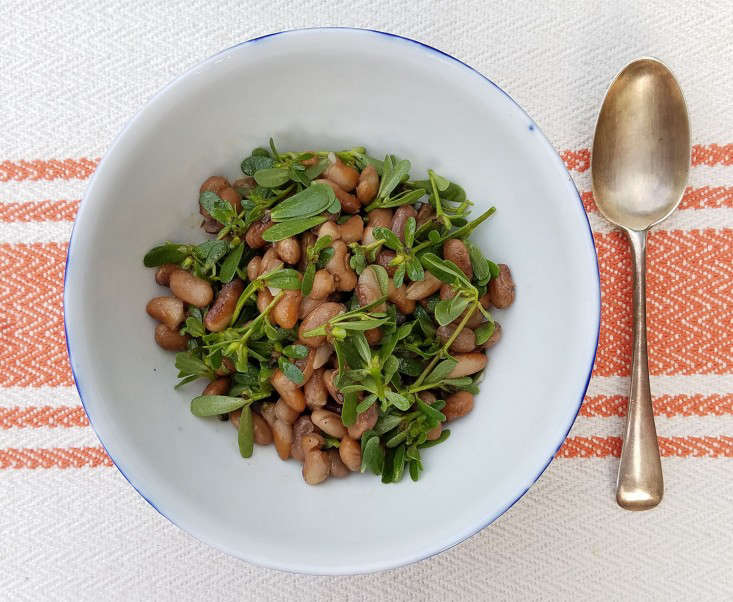 Shelled beans from the garden cooked in water with salt until just tender are tossed while still warm with a cupful of purslane, a squeeze of lemon and little olive oil. 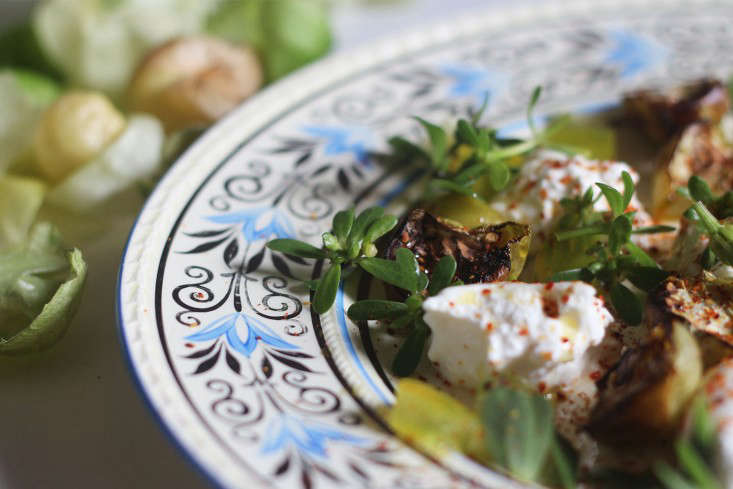 Mozzarella or burrata’s rich blandness is a soft background for acidic purslane. Late-summer tomatillos, splitting from their husks, are a good alternative to their traditional tomato cousins. Cut them in half and slide under the broiler for about 8 minutes (this turns them sweeter). Scatter them on a plate with chunks of creamy burrata and fresh purslane, and dress with a pinch of piment d’espelette and olive oil. 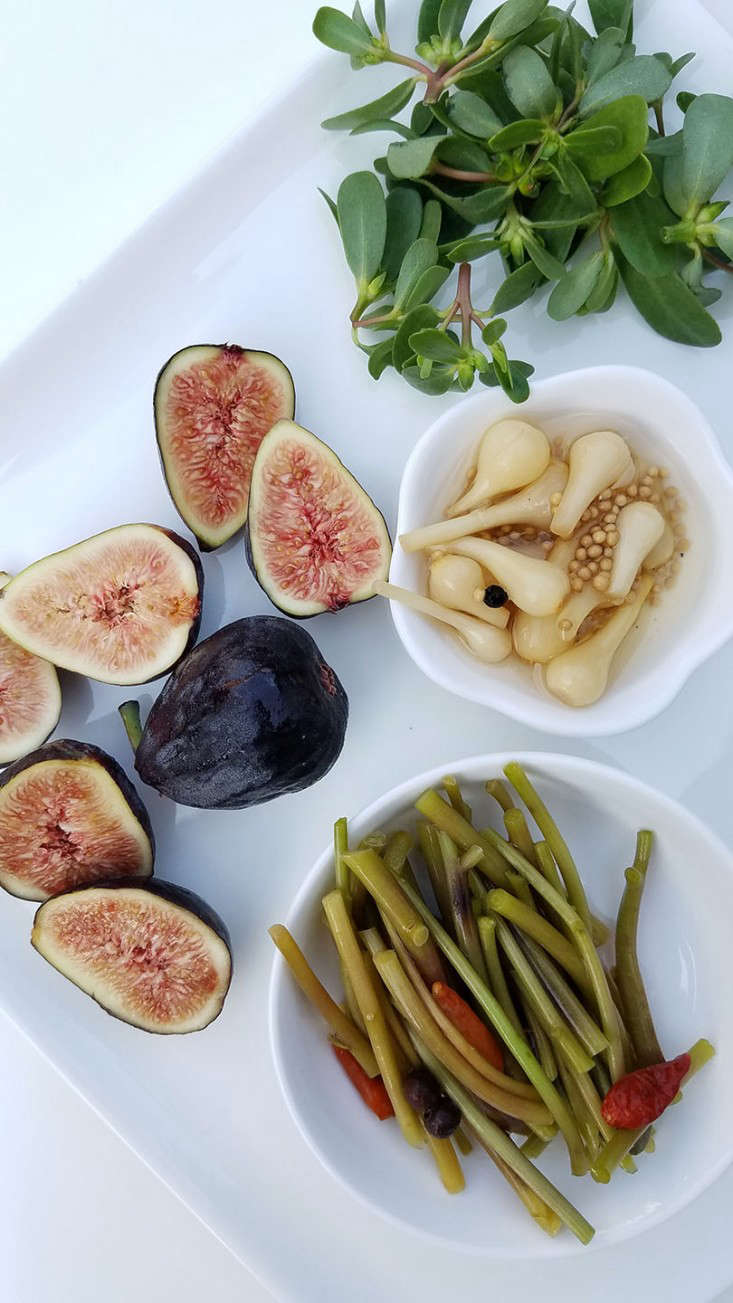 Above: Purslane pickles have apparently been around since the Middle Ages. Because it seems a shame to toss out the juicy stems when the leaves are used up, I cut the most tender stems and preserve them in a fifty-fifty vinegar and water brine with the addition of bird’s eye chiles and fragrant allspice. The pickles are ready after a week and keep indefinitely. I use them on cheese plates and to top everything from Middle Eastern lamb burgers flavored with cumin to Southeast Asian banh mi. 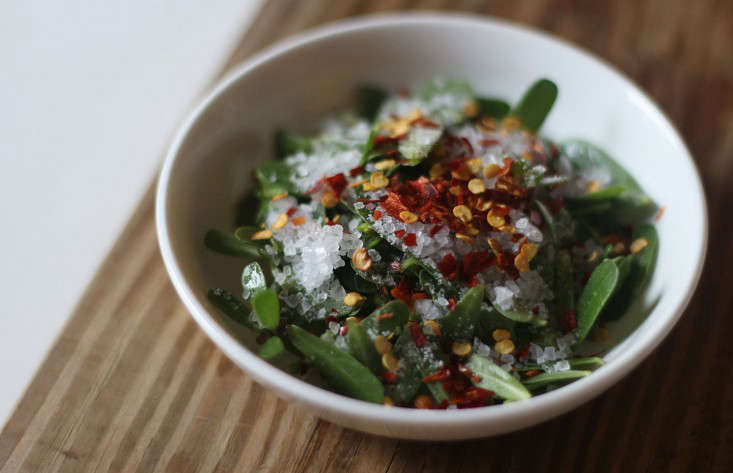 Above: Another quick pickling technique is to massage a handful of purslane leaves with sea salt and chile for kick. Moisture is lost and their flavor intensifies. After 10 minutes give the purslane a rinse and a squeeze before scattering the wilted leaves across toast to accompany breakfast eggs. 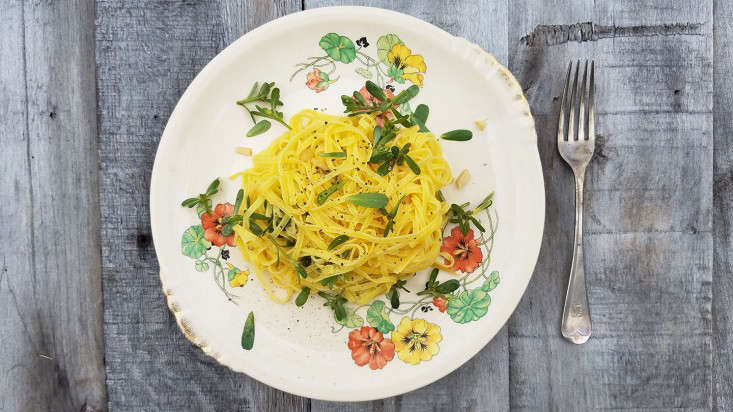 Above: A ten-minute dinner? Egg yolk linguine is tossed while hot with a knob of butter, chopped up preserved lemon zest, and fresh purslane. 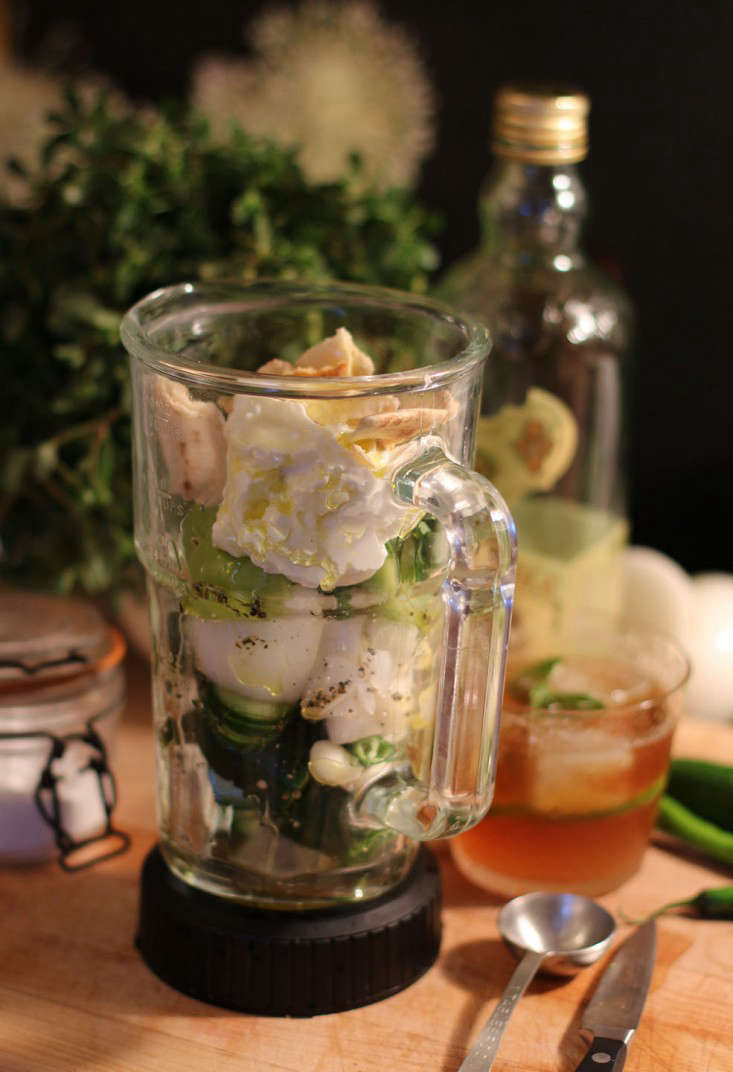 Above: Push-button-food. Crisp cucumber, yogurt, purslane, a clove of garlic, salt. Mint, if you have it. Blend till smooth. If it is too thick, add more cucumber. Eat (or apply as a face pack). 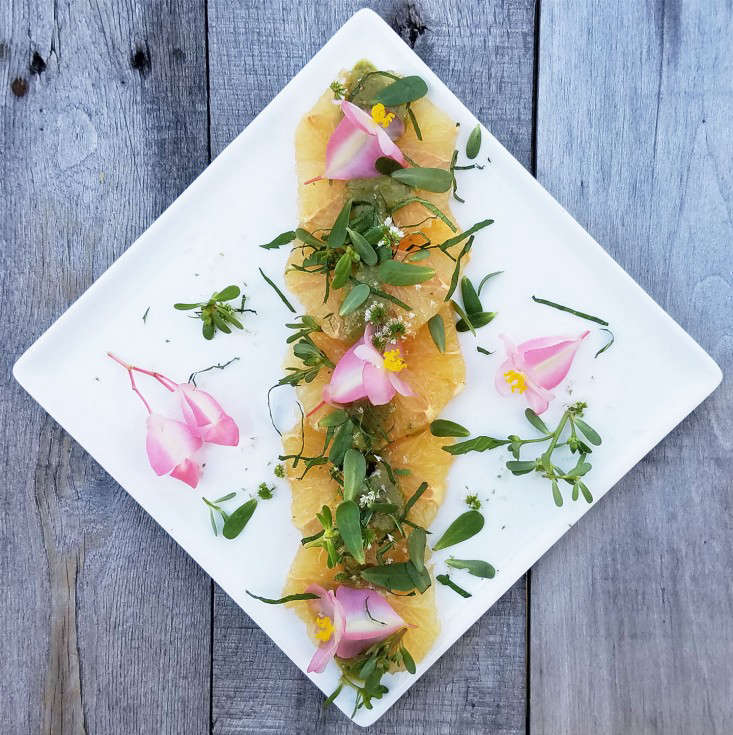 Above: Add a cupful of purslane leaves to your favorite salsa verde recipe. Mine calls for basil, cilantro and mint, a jalapeno and a lot of lime juice. Add this green tonic to roasted or boiled potatoes, poached eggs, egg salad, cold poached chicken or salmon, citrus slices, or toss with slivers of plums so cold William Carlos Williams would have stolen them. 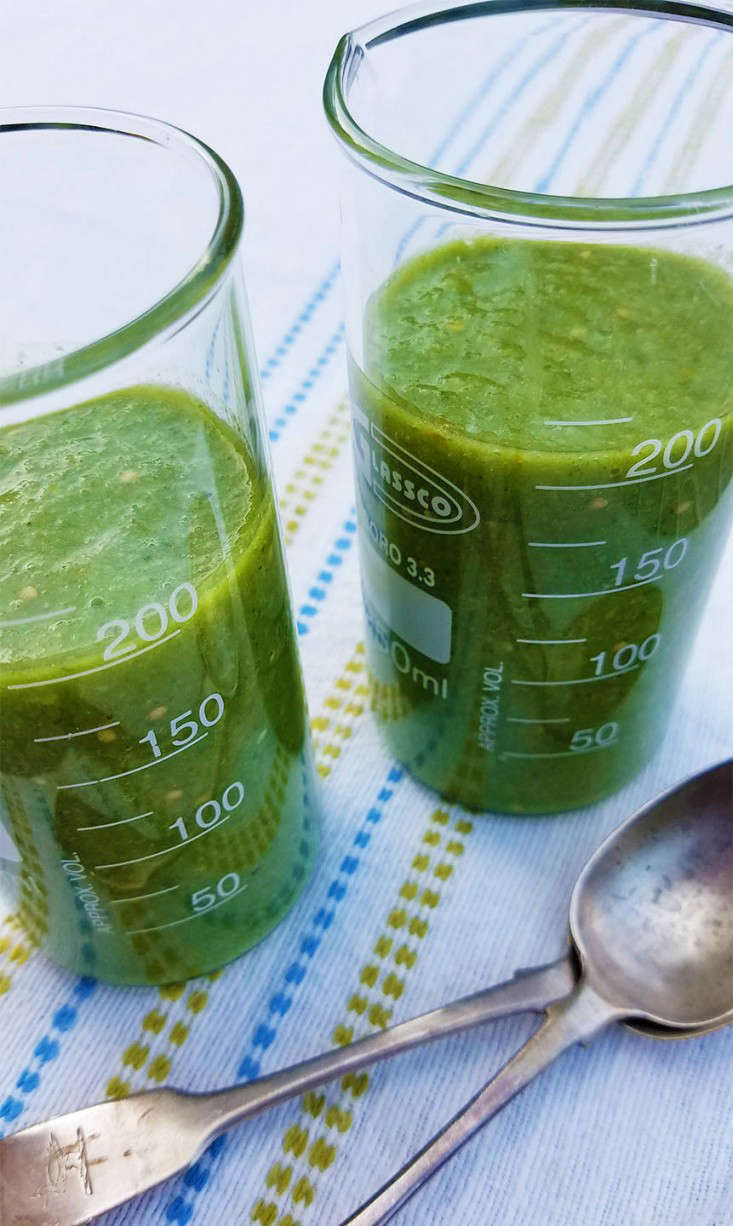 Above: Must gazpacho be red? No. I have served this cold soup to people who sign up for my warm-weather forage walks and no matter how droopy they are after two hours of slogging through summer humidity, it perks them up. It is an excellent light meal, or opening—in shot glasses—to a main course. If you can’t find Green Zebra tomatoes, substitute any other kind.

Put all the ingredients into a blender and whizz till very smooth. Taste. You may want to adjust the seasoning by adding a little more vinegar or sugar—I like gazpacho to be slightly tart but not mouth-puckering. If the soup is too thick for your tastes, add some water. Serve with ice cubes floating in the middle of each bowl.

For more of Marie’s favorite weeds you can eat, see Pokeweed Sloppy Joes and Wild Amaranth.

Architect Visit: An Irish Stone Stable in a Dramatic Landscape