I love Halloween and all its kitsch (but not at my house). So this year I decided to throw a grownup dinner party–with a touch of black, of course–and a foraged floral arrangement.

Most of the decorations came from my closets or the great outdoors (I returned home with an armload of persimmons, twigs, and berries). I had no one to sew a homemade costume for–but a harlequin’s tablecloth? That’s a different story: I cut rough triangles of black fabric–32 in all–and sewed like a madwoman.

As for the food–the most important part–I couldn’t wait to try the recipes we asked you last month to send. It was hard to pick winners to feature for this Dinner Party Project menu. In the end, I made four courses for a party of six, featuring garden-to-table dishes that complemented each other (see below for the winners).

Photography by Meredith Swinehart except where noted. 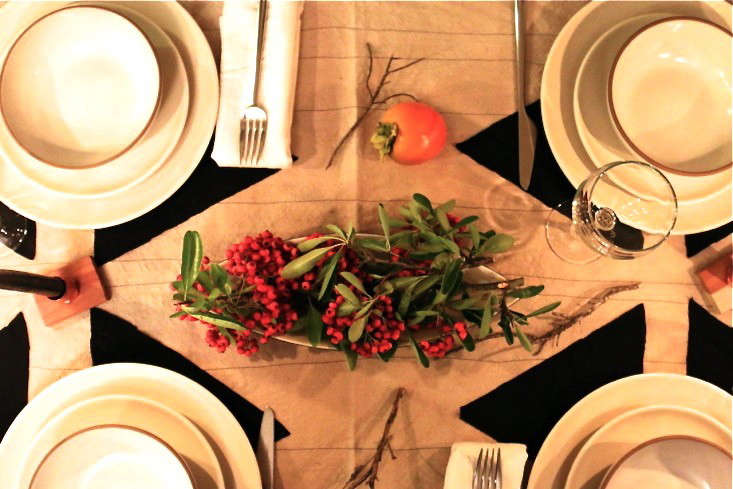 Above: I didn’t want to spend a lot of money on this tablescape–ideally, I wanted to spend nothing–but I wanted the table to remind guests that we were celebrating Halloween. So I foraged for fruits and flora and used materials on hand, including a painter’s drop cloth and some black cotton voile, to sew the tablecloth.

The weekend before the party, I spent some time outside the city, tromping around in Marin County, and collected persimmons, orange pyracantha berries, and spooky-looking dead branches for my table. 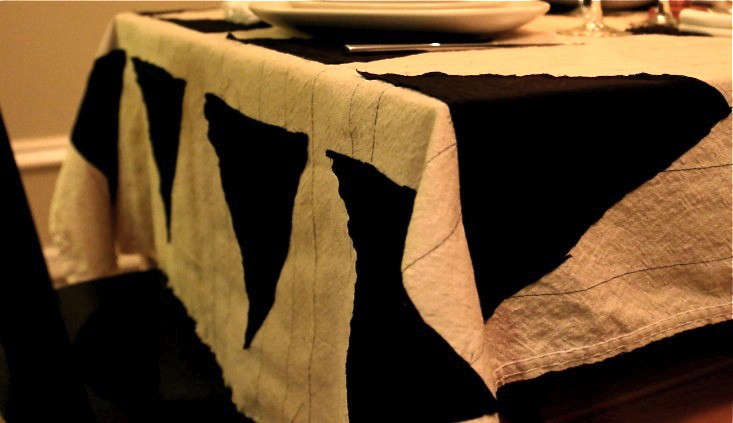 Above: For the tablecloth, I used a canvas painter’s drop cloth and black cotton voile, both of which I had in my linen closet. I cut an equilateral triangle from a piece of cardboard, and used it as a guide to cut 32 rough triangles of voile. I cut quickly, both to keep the project moving and to achieve the rough look I was after. I sewed the triangles to the drop cloth using my machine, then sewed freehand stripes down the length of the cloth. 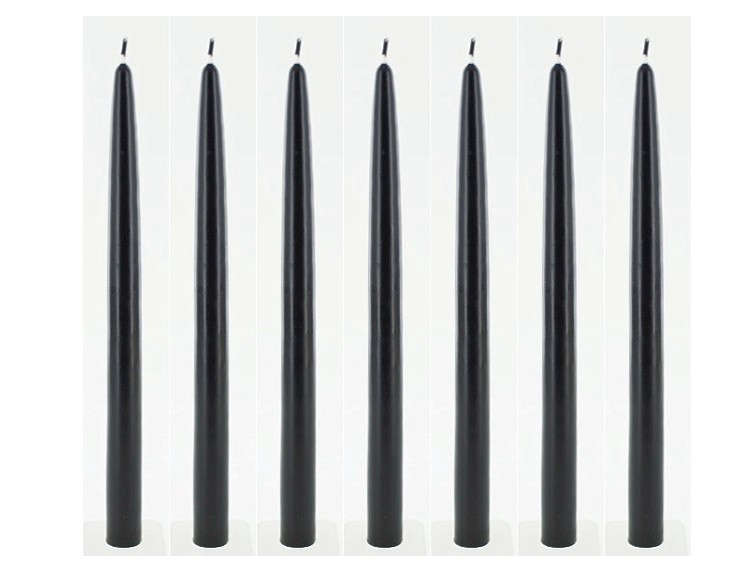 Above: I already had some black candles, but if you don’t, a box of 12 12-Inch Black Taper Candles is $21 from Amazon. 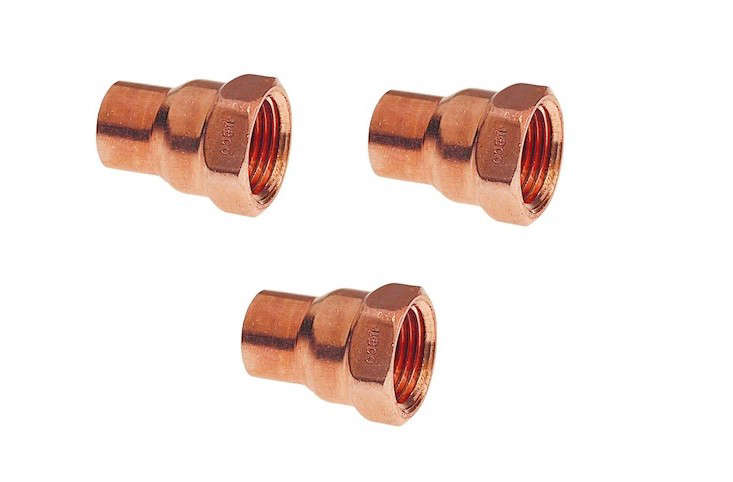 Above: My one purchase for the decor: I sprung for taper candleholders from the plumbing department. I used 3/4-inch Copper Pressure Cups, which were heavy enough to make my black taper candles stay put; $3.88 each at The Home Depot. 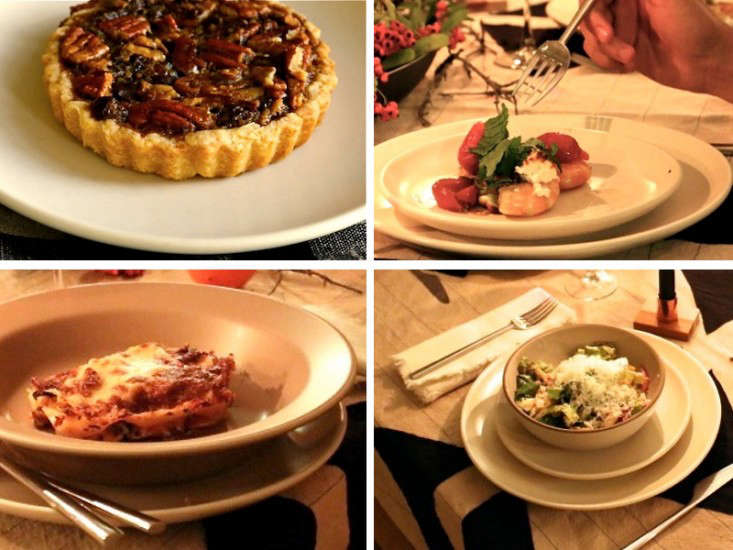 Above: Congratulations to the winners of our recipe contest! The winning recipes belong to (clockwise, from top left) Laetitia Phelps of Sonoma, who sent us her Chocolate-Orange Pecan Pie; Fenella in Ontario, for her Prawns with Tomatoes; Betina Simmons of Seattle, for Radicchio Salad with Manchego Vinaigrette, and Martha Buckwalter-Davis, in Ireland, who sent us her Roasted Squash Lasagne.

Here’s what the winners say about their dishes: 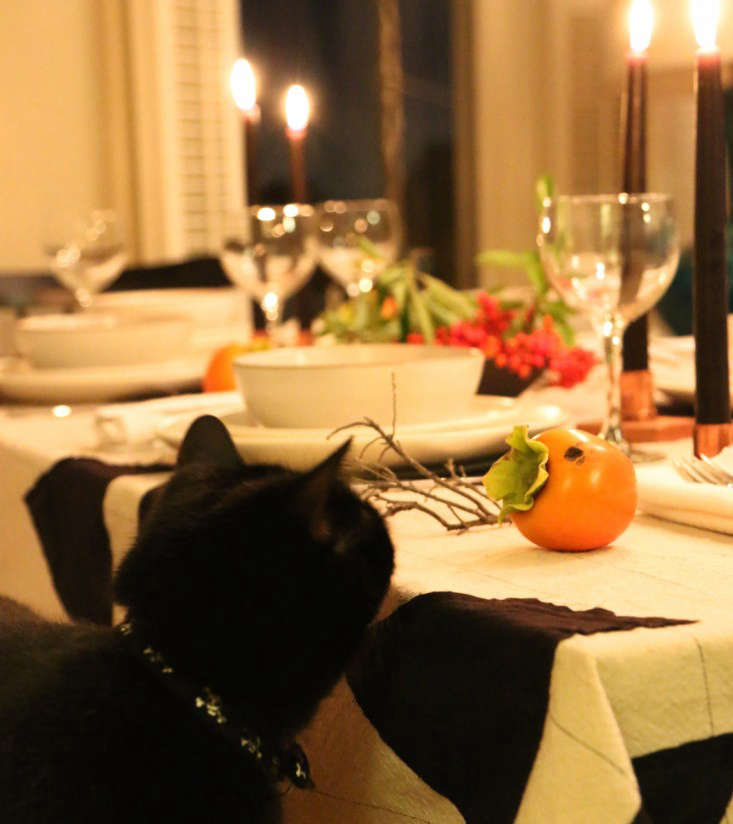 Above: My two omnipresent black cats were a natural part of the decor. (This is their holiday, after all.)

Get started planning your next dinner party. See: