We’re delighted to feature a winning recipe from our first-ever reader recipe contest: a squash lasagne adapted from Epicurious by Martha Buckwalter-Davis, who lives in Ireland.

It’s “about the most decadent vegetarian dish I can think of,” says Martha, who often adds mushrooms to the dish. We served the lasagne at a recent DIY: Halloween Party for Grownups. 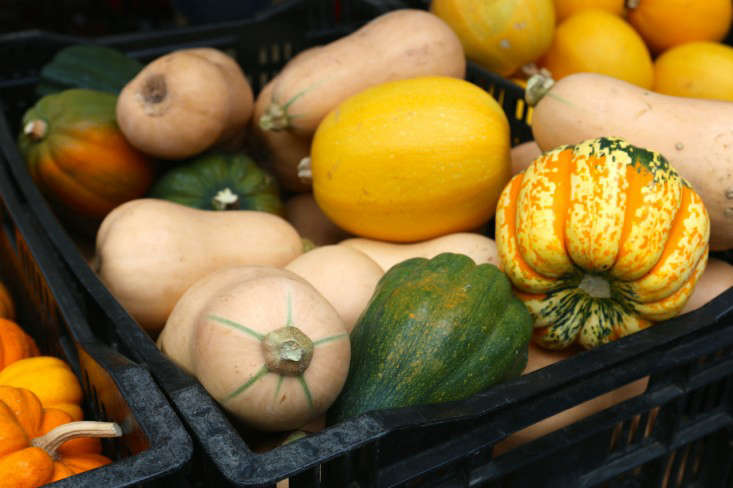 Above: Squash for sale at the Ferry Building in San Francisco. 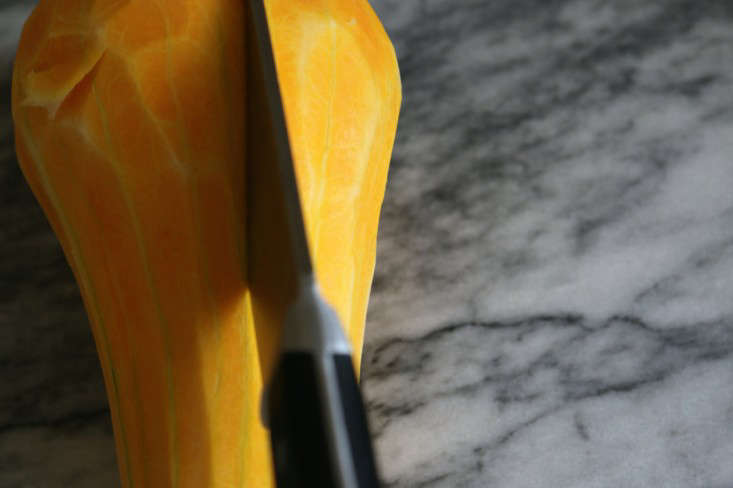 Above: I had never cooked with butternut squash before, and slicing it almost cost me a finger. Note that the squash is very dense, like an unripe pumpkin. Use a sharp knife and be careful. 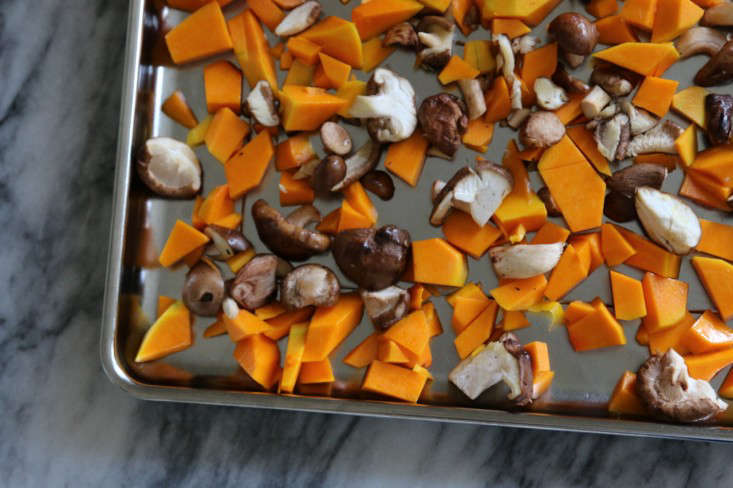 Above: I took Martha’s suggestion and added mushrooms to the roasting pan. 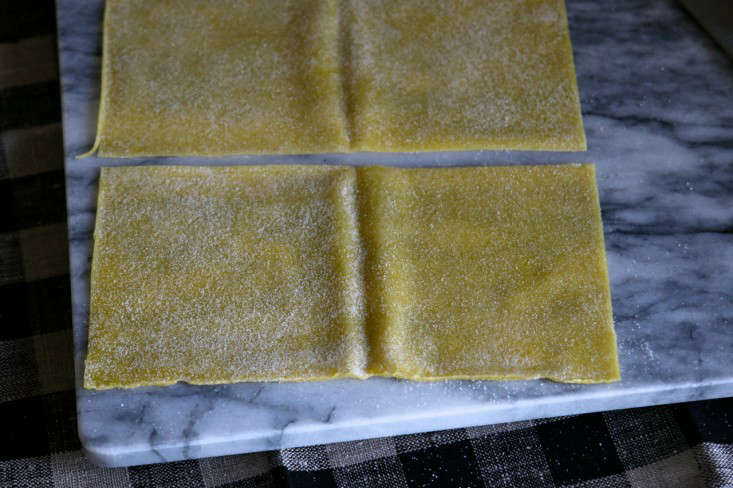 Above: I used sheets of fresh egg pasta instead of the dry no-boil pasta in the original recipe. 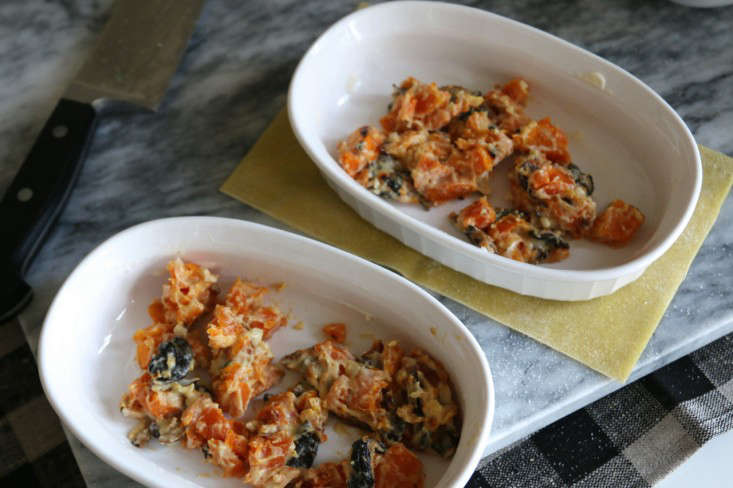 Above: The best case for using fresh pasta is that you can quickly cut it to size to fit your pan. Note here that the butternut squash “sauce” needn’t completely cover the bottom of the pan. As the lasagne cooks, the layers of pasta and sauce will collapse into each other. 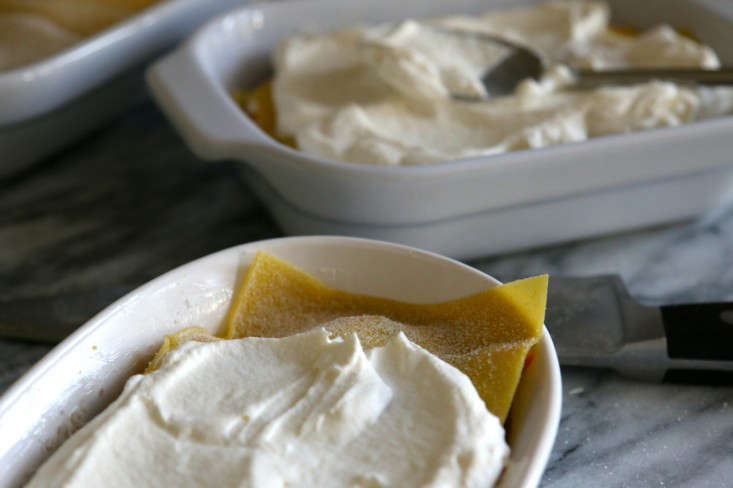 Above: I was reluctant to use all the whipped cream the recipe called for (at this stage, the lasagne looked more like dessert than dinner). But the cream cooked down into the top layer of pasta, and created a rich flavor. 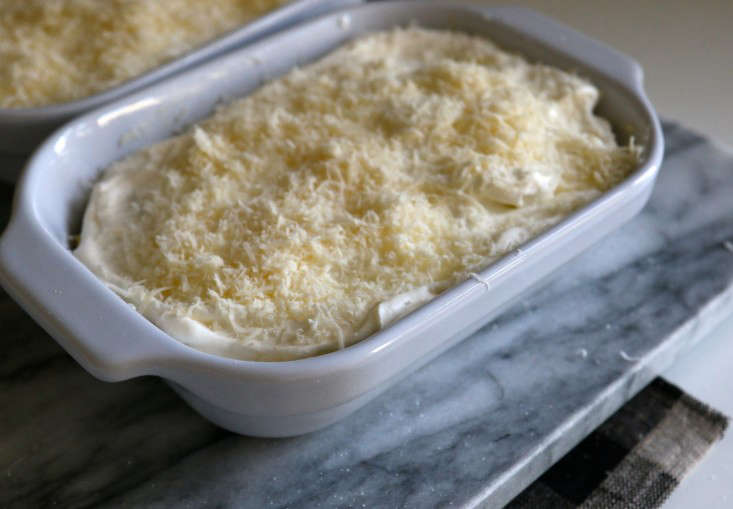 Above: The assembled lasagne, topped with Parmesan cheese and headed for the oven.

Preheat oven to 450 degrees and oil two large shallow baking pans. In a large bowl, toss squash with oil to coat it and spread in one layer in pans. Roast squash in oven 10 minutes and season with salt. Stir squash and roast 10 to 15 minutes more, or until tender and beginning to turn golden.

Meanwhile, in a saucepan bring milk to a simmer with sprigs of rosemary. Heat milk mixture over low heat 10 minutes and pour through a sieve into a large pitcher or measuring cup.

In a large heavy saucepan, cook garlic in butter over moderately low heat, stirring, until softened. Stir in flour and cook roux, stirring, three minutes. Remove pan from heat and whisk in milk mixture in a stream until smooth. Return pan to heat and simmer sauce, whisking occasionally, about 10 minutes, or until thick. Stir in squash and salt and pepper to taste. Sauce may be made three days ahead and chilled, its surface covered with plastic wrap.

Reduce temperature to 375 degrees and butter a 13-by-9 baking dish. Pour one cup sauce into baking dish (sauce will not cover bottom completely) and cover with three lasagne sheets, making sure they do not touch each other. Spread half of remaining sauce over pasta and sprinkle with 1/2 cup Parmesan. Make one more layer in same manner, beginning and ending with pasta.

In a bowl with an electric mixer, beat cream with salt until it holds soft peaks and spread evenly over top pasta layer, making sure pasta is completely covered. Sprinkle remaining 1/3 cup Parmesan over cream. Cover dish tightly with foil, tenting slightly to prevent foil from touching top layer, and bake in middle of oven 30 minutes. Remove foil and bake lasagne 10 minutes more, or until top is bubbling and golden. Garnish each serving with rosemary.

Step-by-Step: A Halloween Party for Grownups

Table of Contents: Lessons from Japan