I have moved my New York City gardens three times. Yes, I mean the gardens came with us when we moved. For my husband, marrying me came with heavy horticultural baggage. Two years into Garden No. 3, I am taking stock of the changes. So what has happened since I put my garden to bed last fall? 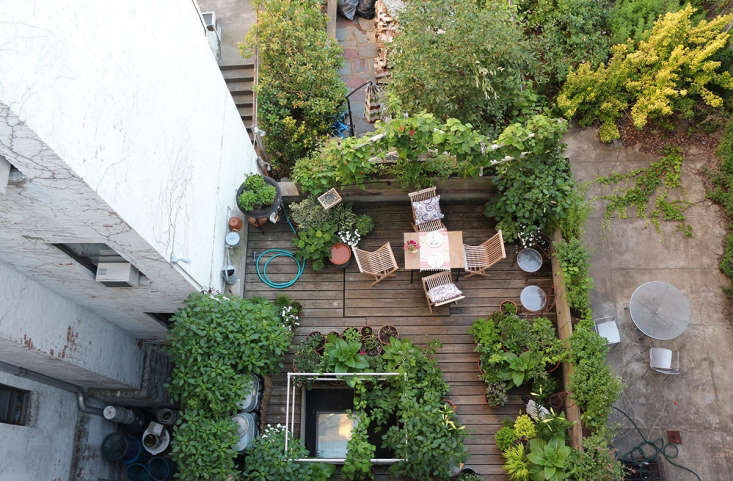 Above: When after 11 years our Brooklyn rent went through the roof overnight, we moved to Harlem, to a first floor townhouse terrace surrounded by tall buildings. The blueberries and raspberries adapted. But after fewer than two years there, our renovating downstairs landlord wanted our apartment and we lost our lease. We came back, hot and bothered in the middle of the growing season, all the way to Brooklyn. 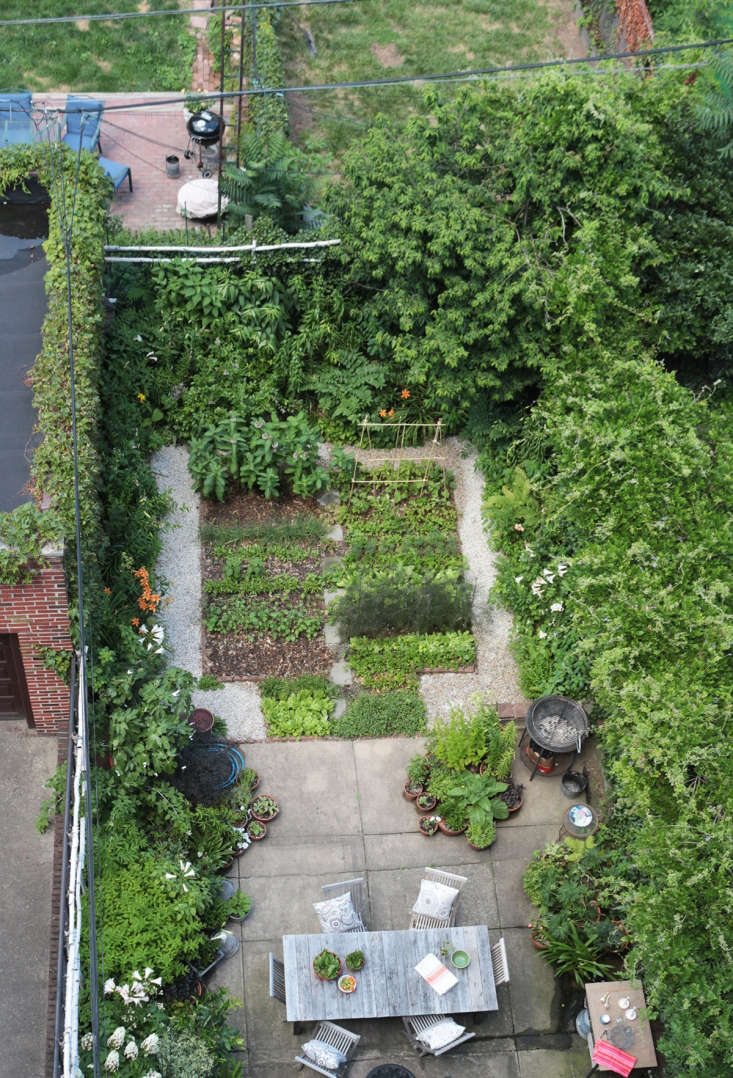 Above: Our third and current garden is down the road from the rooftop terrace that started it all. Last year I wrote about that move and the garden’s makeover and first year. The garden that I tag #1stPlaceBK on Instagram is my biggest yet—1,000 square feet—and on the ground floor. We have come down in the world. But we have room to move. And I have learned a lot about gardening in shade.

I have learned that it is in their second years that my gardens have begun to feel established. Mistakes inspire problem solving, temperamental microclimates are better understood, seasons’ sunlight idiosyncrasies are minutely observed, and pots are shifted around until form and texture and aspect are in sync (mostly).

I wanted to cover the existing, drab, and ragged-looking paved paths that separate the perennial beds from the central vegetable plot (digression: tulips are edible, you know. I planted them during the US presidential election last year when the world seemed very dark). Because we rent, I also wanted an impermanent, low-cost solution that we could later undo, if necessary. Pea gravel was the answer. I swept the paths clean and brought in enough gravel to cover them to a depth of 1.5-inches (I calculate on using 1 cubic foot of gravel per 7 – 8 square feet). 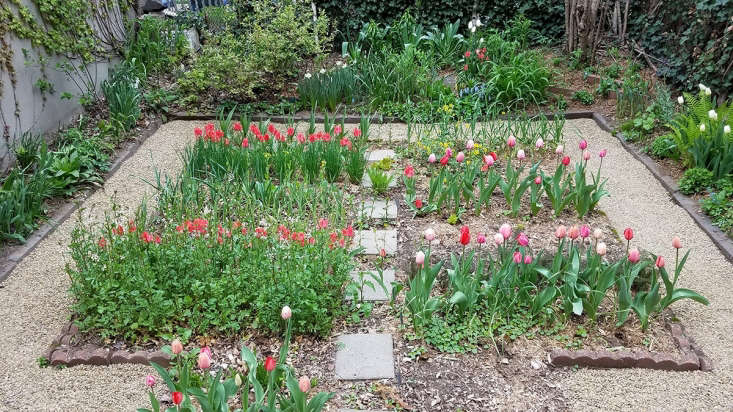 Above: The change was an instant aesthetic relief. Calm after clutter. Exhale. 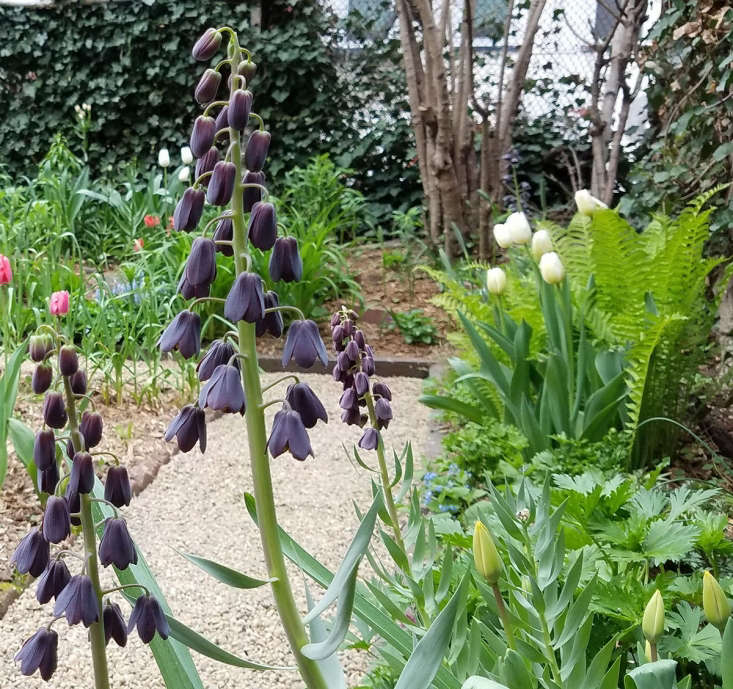 Above: With in-ground planting space to play with at last, I planted bulbs that I have never been able to grow. Frittilaria persica blew me away. Austere and elegant, its dusky purple, spired blooms are an early spring stunner. If our lease is renewed (I take nothing for granted, anymore), I will be planting more in the fall, for greater impact. Native to the region around Iran, here they grow in a low pH of 5.4 in the garden’s side beds and do not receive more than four hours of direct sun in their growing season. 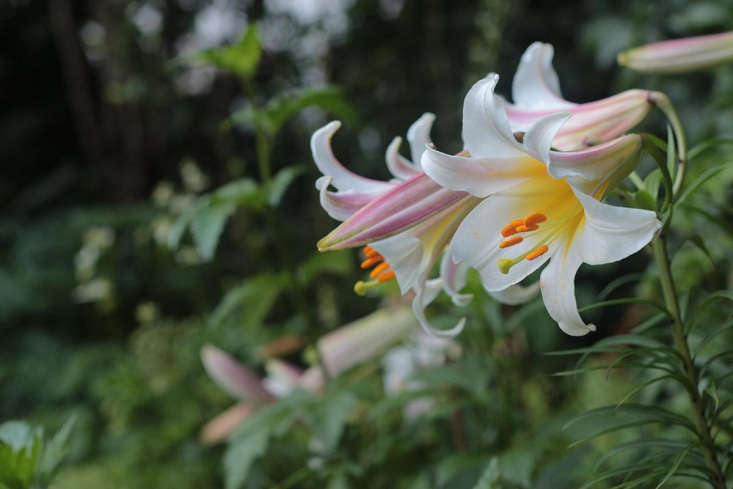 Above: The regal lilies planted in the side beds are standing tall, multi-flowered and perfumed in the midsummer garden. I overwintered my pot-grown lily bulbs in the refrigerator in peat moss baggies (in-ground lilies stayed put). I planted these bulbs too early in late winter, lulled into lily dreams by a weirdly warm February.  A late deep freeze and melting snow proved too much for some of them, and I lost a handful to impatience. 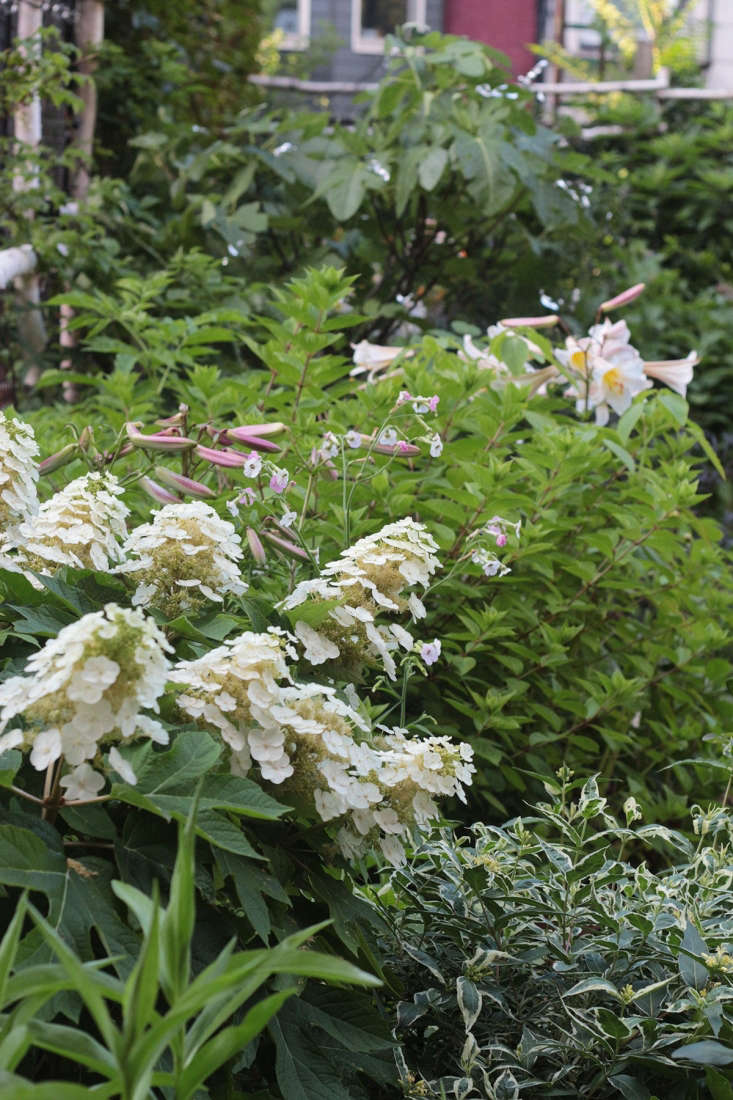 Above: Two thirds of this outdoor space is poured concrete, and that is where all my pots live (mostly terra cotta, with some galvanized metal). The hydrangeas I bought at the nearby and lovely Gowanus Nursery for this larger space have filled out in their second year. The Oakleaf (Hydrangea quercifolia) and PeeGee (Hydrangea paniculata ‘Grandiflora’) are full and lush. The variegated Diervilla (Diervilla sessilifolia ‘Çool Splash’) moved with us from Harlem and attracts many pollinators with its honeysuckle-ish summer flowers. Its lively leaves brighten up the concrete slab in the shady hours. 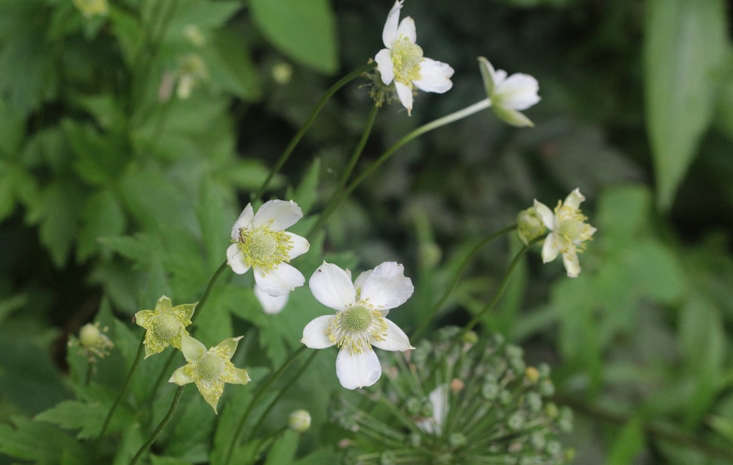 Above: Planted in fall of 2015, clumps of thimbleweed (Anemone virginiana – native to much of North America) bloom delicately near the colony of new ostrich ferns (native Matteuccia struthiopteris—source of edible fiddleheads). In this shady corridor I was delighted to find the ramps (Allium tricoccum) I planted in spring 2016 reappear. I have planted many more. They share this bed with indigenous Solomon’s seal (Polygonatum odoratum), calamintha and deadly but beautiful monkshood (Aconitum), which blooms bright blue in late fall. 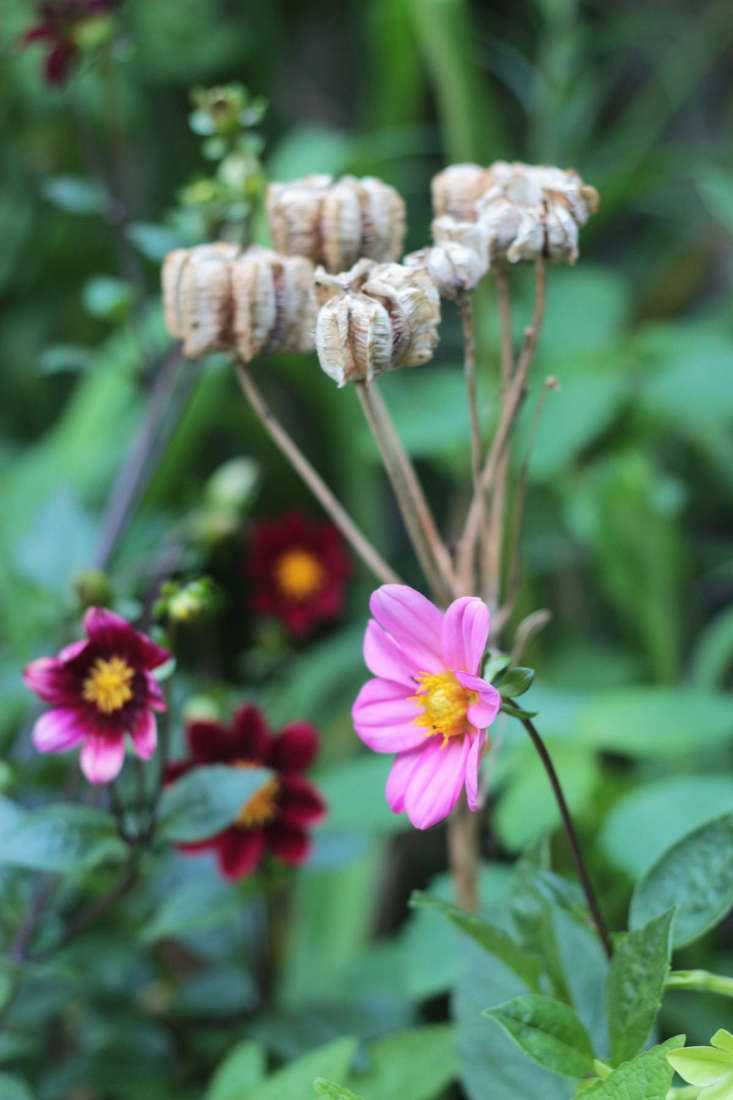 Above: In areas with more sun, the surprise success—in pots and in-ground—has been the dahlias. An impulse buy early this spring when the garden was brown and drab and in deep, deep shade, the dahlias are squeezed in wherever there was a spot. They have been flowering effortlessly since May. 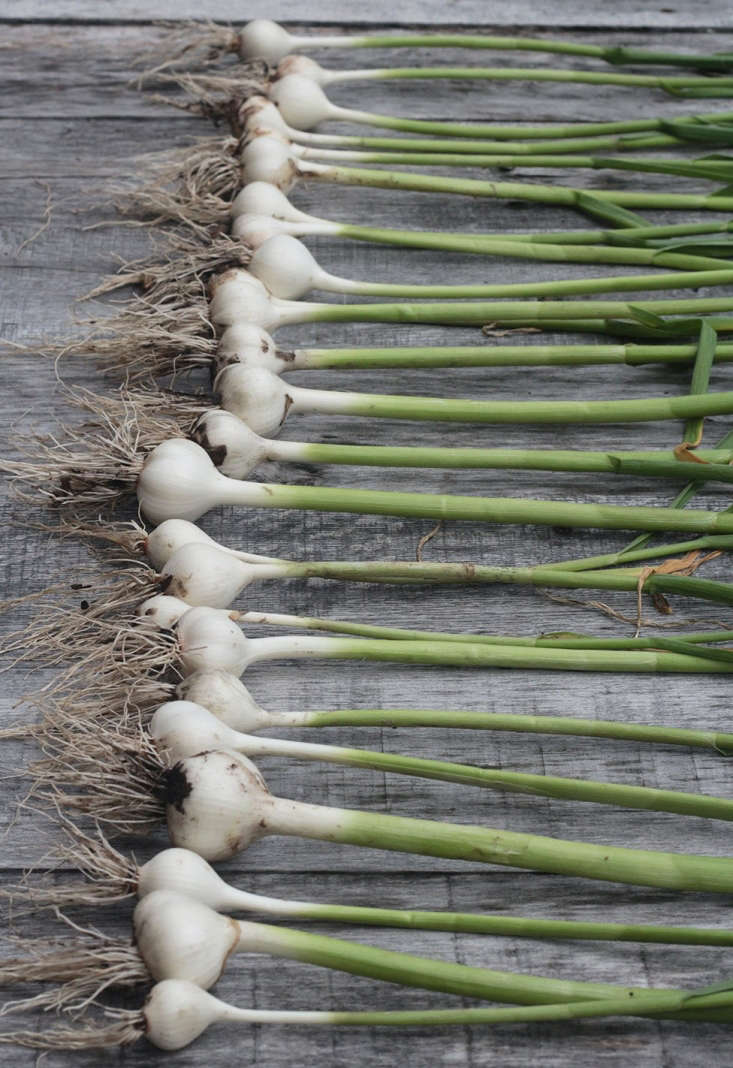 Above: Harvested from the central vegetable plot, fall-planted garlic has been feeding us since I pulled the first bulbs in early June. The best results came from seed garlic purchased from Botanical Interests ($2 per bulb, available again in fall), followed closely by elephant garlic from store-bought bulbs. 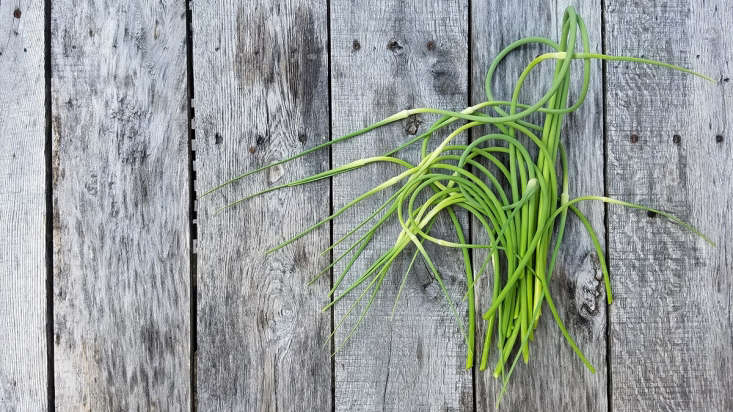 Above: Garlic scapes are a delicious early summer bonus to that crop. 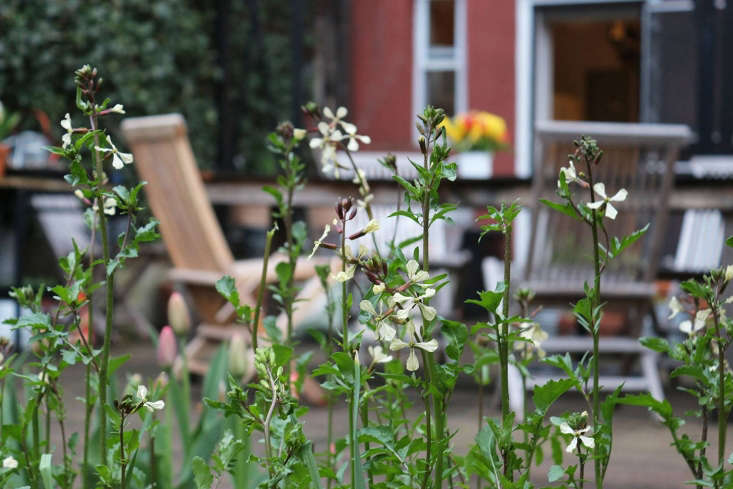 Above: In terms of salad greens, my cool weather arugula lived right through winter to bloom in spring (the flowers are peppery). 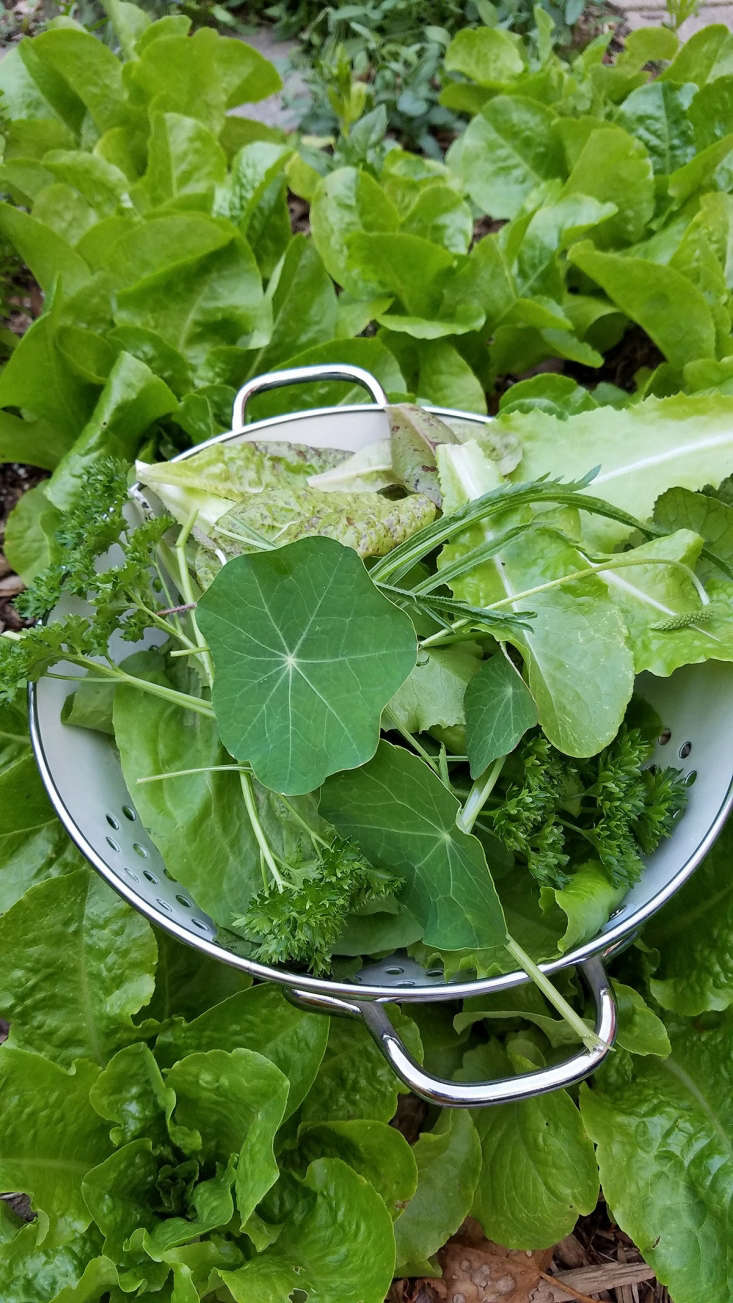 Above:  In early spring I planted lettuces, winter cress and watercress, and have been harvesting nightly salads since May. 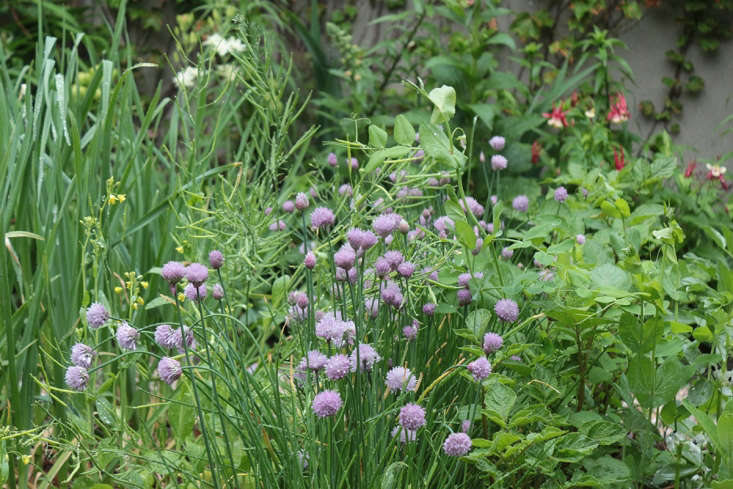 Above: It has been a bumper year for chive blossoms. I add them to salads and preserve the rest by pickling. Pull the whole flower stalk out when collecting flowers or you are left with a forest of depressing dead sticks later in the season. 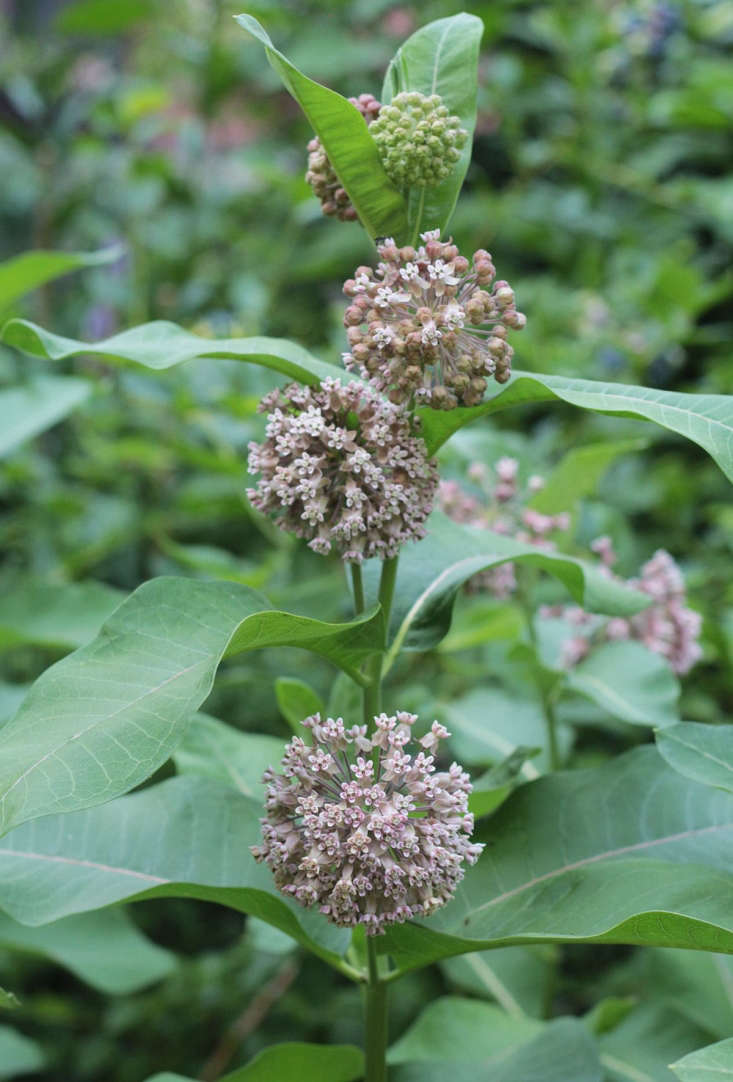 Above: Planted to boost local biodiversity and to lessen my dependency on wild harvested milkweed, my common milkweed (Asclepias syriaca) plants are beginning to provide edible shoots, buds, and flowers. The fledgling colony caught me off guard this spring: I transplanted it late last fall to the rear of the garden but it reappeared in its original spot, with interest, shooting up from tenacious underground runners—no doubt the reason why so many farmers view it as a weed and destroy it with herbicides. It may yet take over my world.

You can buy Asclepias syriaca ‘Like Silk’ from Annie’s Annuals: $8.96 for a 4-inch pot. 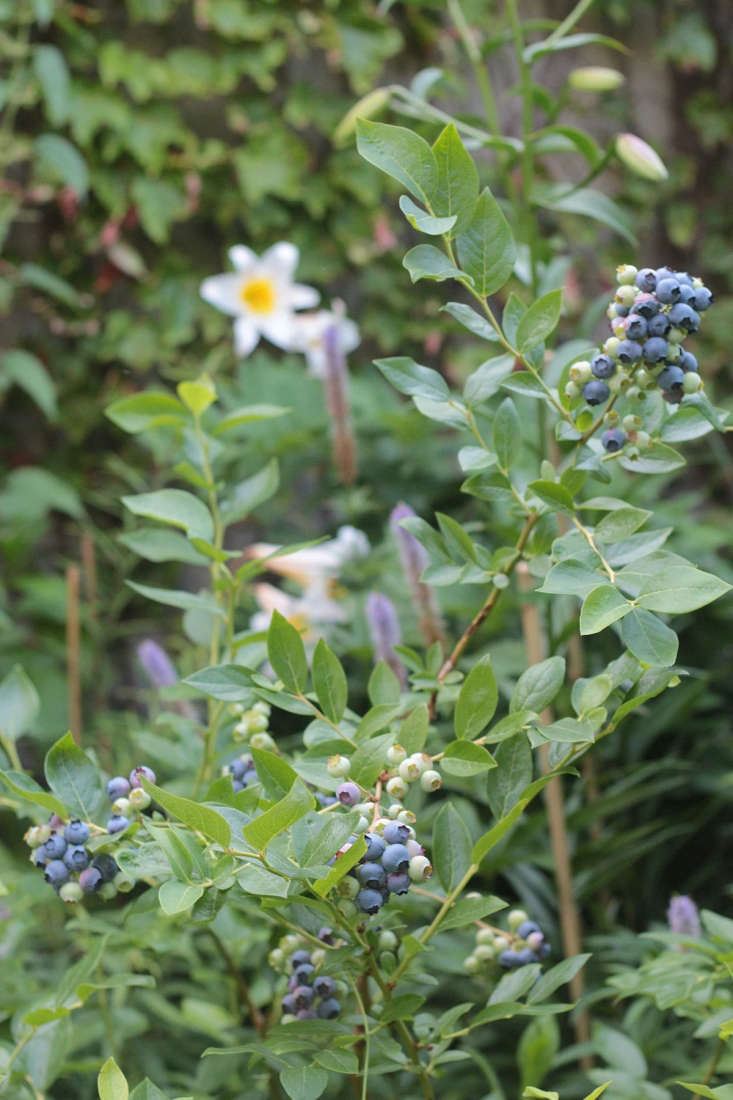 Above: My old friends the blueberries have stretched their roots, moved from pots to actual soil, growing in the low pH in which they thrive. This year’s has been a bumper crop. 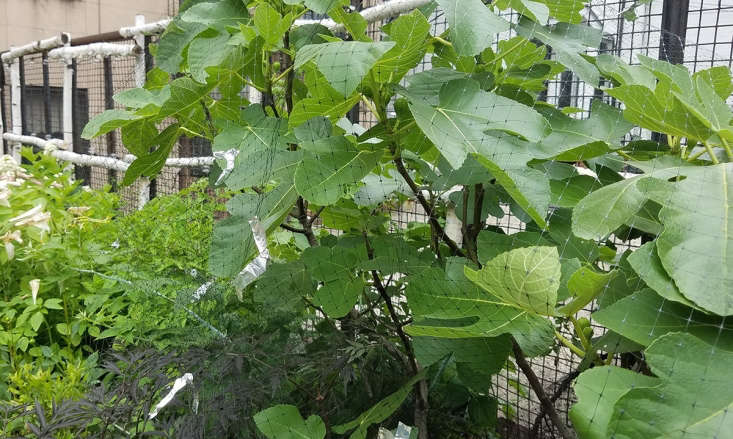 Above: My husband bought me a beautiful new fig tree last year. (Our first, beloved and prolific little tree was split and killed in Harlem by a lethal icicle suspended from a high and leaking gutter). Something began to eat the fruit before it could ripen, and recently I netted the whole tree, tying little flashing foil flyers to the fine nylon to warn birds (I would hate to ensnare one). So far, so good. 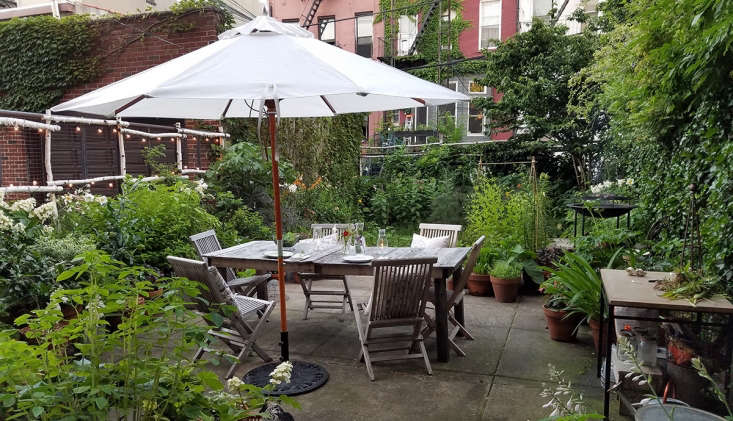 Above: This garden is, as all our gardens have been, a place to live and to decompress. In good weather it is where we eat every evening. Right now it is effervescent with twilight fireflies, and it is occasionally patrolled by an insect eating possum. It is, as every garden has been, a muse and a teacher, a mentor and an unsparing critic. Spending time here—sowing, planting, watering, weeding, watching, picking berries or salad for supper, rearranging a collection of pots for the 20th time— is like being allowed into the playground as a child. It is where I would rather be.

Don’t make me leave. Yet.

Can This Garden Be Saved: We Have Nowhere to Sit

Before & After: A Courtyard Garden Brings Light to a Windowless Home