Last year, the day after the Fourth of July, in peak growing season, our landlord announced that the lease on our Harlem apartment would not be renewed. He was going to be renovating, he said, and that would include ripping up our terrace. Our new garden was in peak growth. The New York Times had just sent a reporter to visit it. Now it had to be destroyed.

Photography by Marie Viljoen, except where noted. 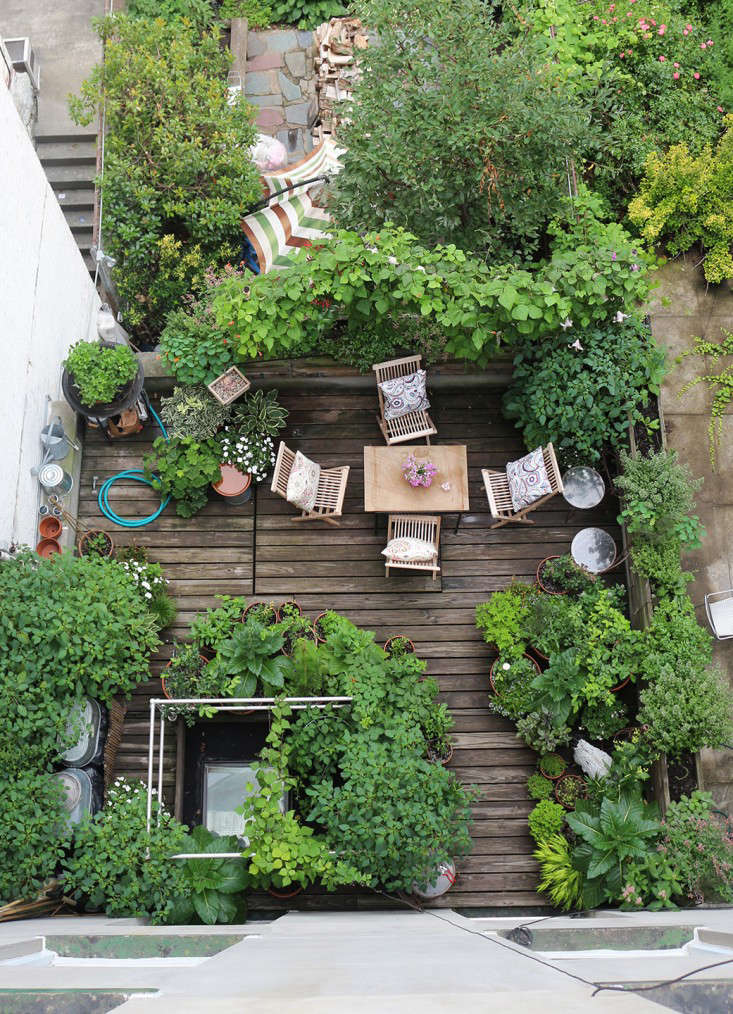 Above: We had moved to Harlem almost two years earlier, when our Brooklyn rent had gone through the roof. After two Polar Vortex winters and a steep learning curve, the neglected space had come into its own and we had just settled in. 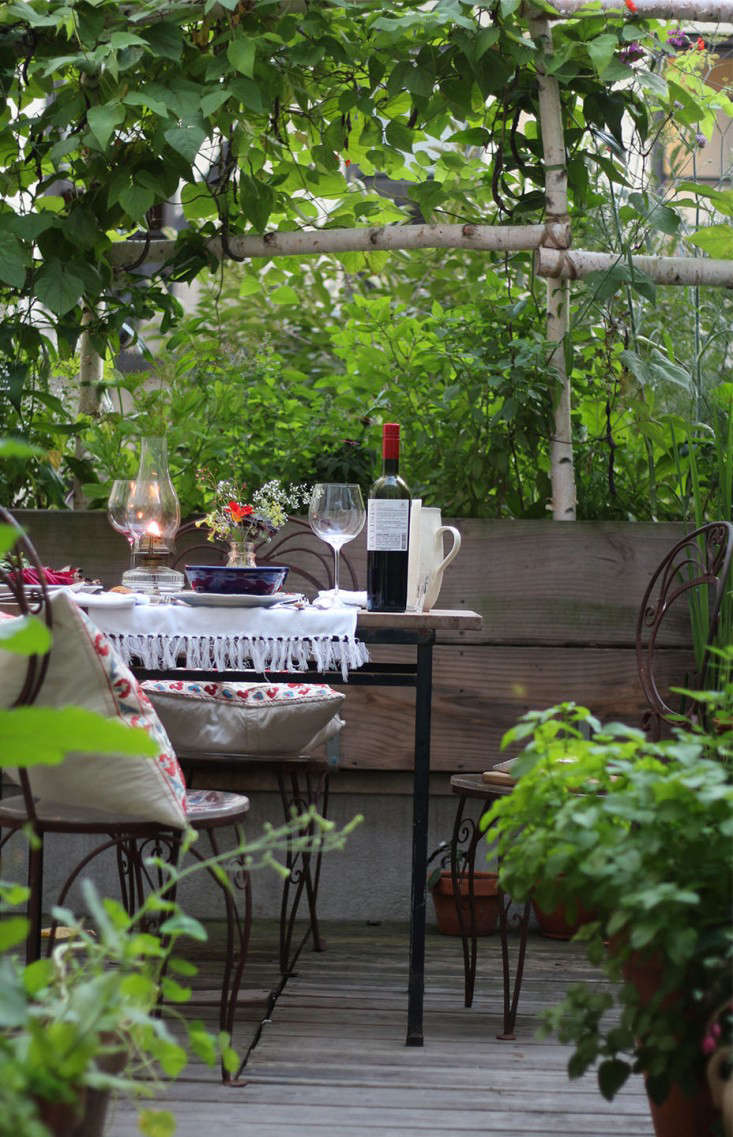 Above: My goal in making any garden is to create a sanctuary where outdoor living is complemented by the visiting birds, bees, and butterflies which provide as much interest as scented flowers and edible plants. It takes time (and money), and the thought of undoing it all was wrenching. 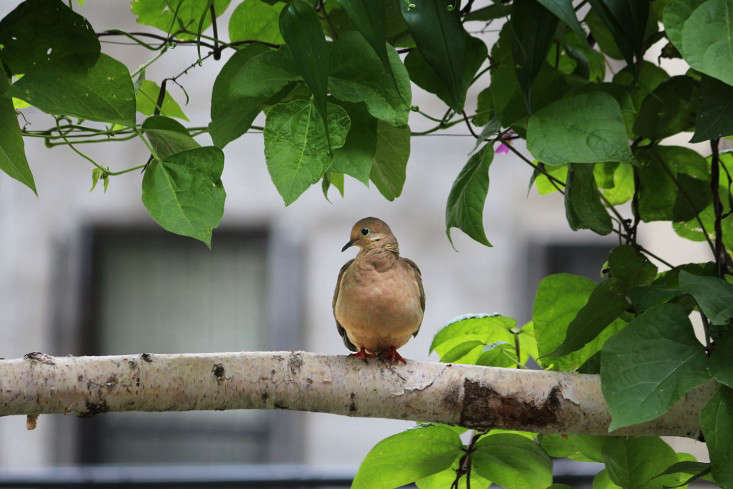 Above: To dismantle our birch pole screen, now a favorite perch for mourning doves, I cut down scarlet runner, lablab, and purple pole beans planted for privacy. Climbing gloriosa lilies, in bloom, were unplanted very carefully. Their tubers are long and fragile. 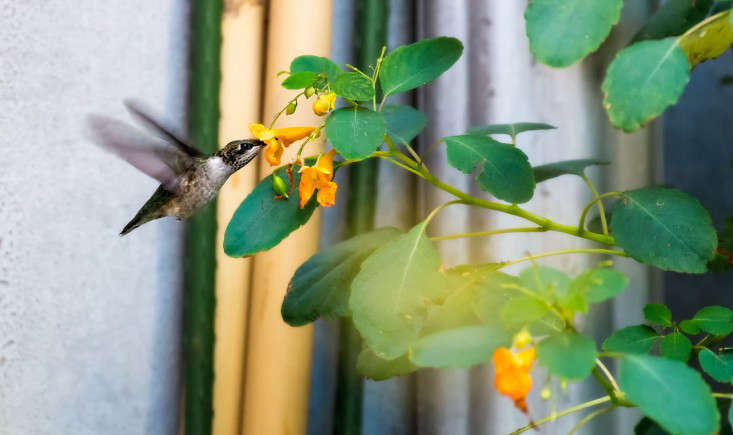 Jewelweed had just begun to flower, planted to attract hummingbirds, as it had the previous year. It was four feet tall and would move poorly. I cut it down. The five-foot ‘Silk Road’ lilies were replanted temporarily in smaller pots, so that their leaves could continue to feed the bulbs for the next year. 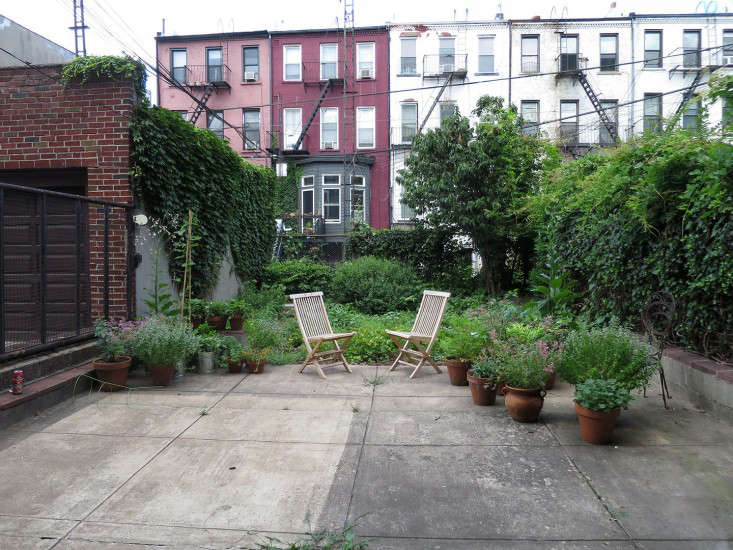 Above: Meanwhile, in a few frantic weeks of typical New York real estate panic, we found an apartment back in Brooklyn, just a few blocks south of our first rooftop terrace. The north-facing garden was two-thirds poured concrete slab, one-third weed-covered earth—almost 1,000 square feet in total. It was uncompromisingly bare, with one patch of daylilies and a clump of Solomon’s seal. But it was the outdoor space we coveted, and the streets were leafy and welcoming. We felt we were coming home. 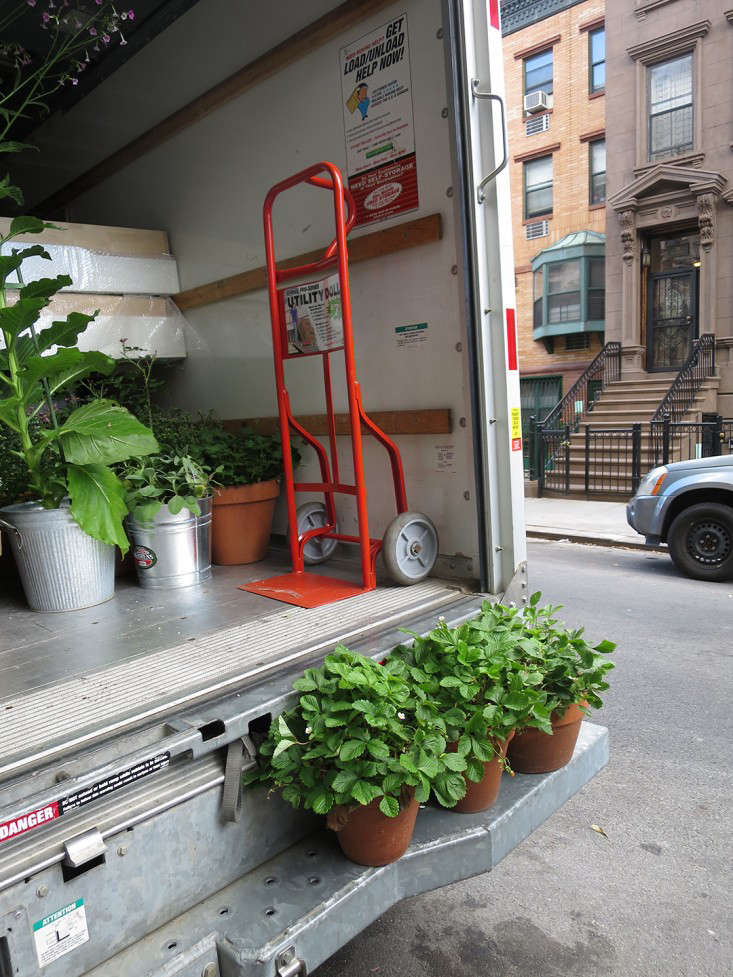 Above: To save on moving expenses, all the pots that my hero-husband could lift were packed into a U-Haul truck and taken to our new address ahead of the big move. The professionals from Dumbo Movers were left to deal with the biggest and heaviest, upwards of 50 pounds. There was not a peep of protest (we tipped them each 20 percent of the move cost and provided endless cold drinks). 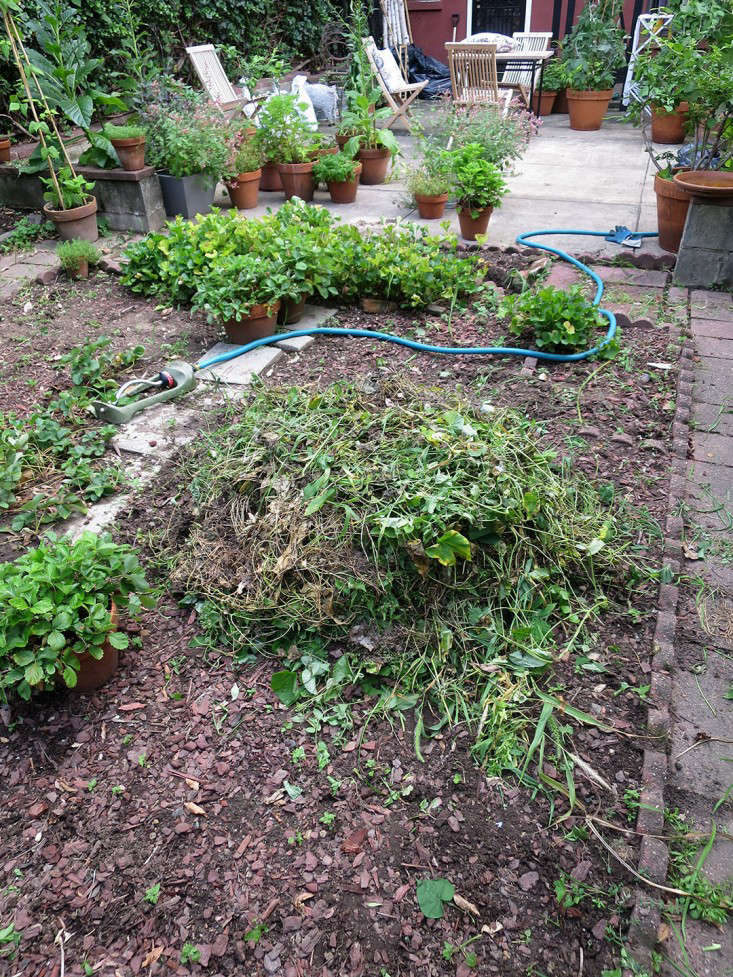 Above: My first gardening task was to attack the weeds. I began before the boxes were unpacked. I learned to hate morning glories and quickweed. And mosquitoes, prolific and voracious at ground level. 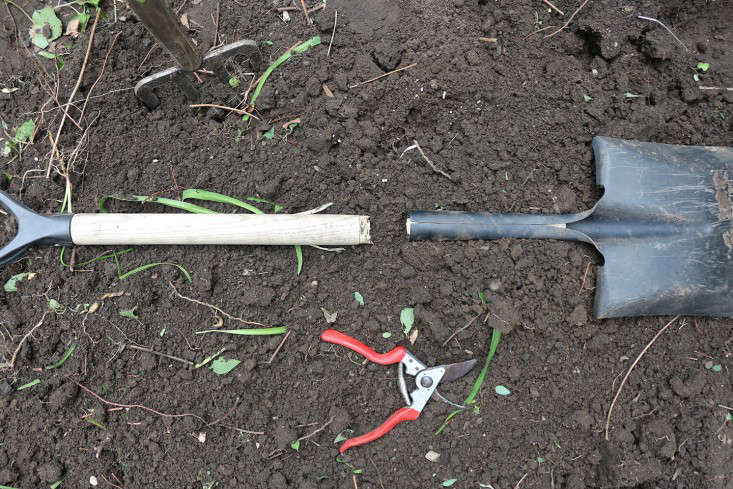 Above: A sprawling spirea shrub that was hogging a choice sunny spot in the rear bed was ousted. I broke my spade. I dug out piles of rocks, planted my potted blueberries in-ground for the first time in their lives, ordered 20 extra birch poles to make another trellis to soften the black iron fence on one side of the garden. I divided the daylilies and Solomon’s seal and redistributed them. My activity masked the fact that I had no idea how to make this strange space beautiful. 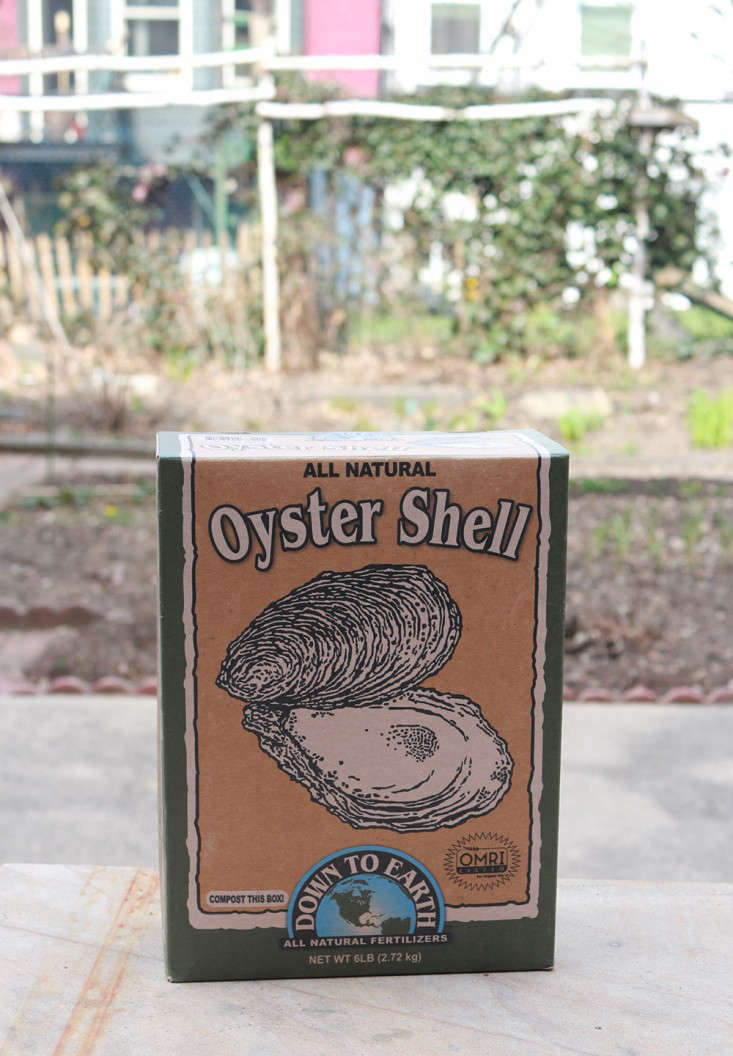 Above: I had the soil tested in the central plot, as I planned to grow edibles, there. The results from Cornell were not unexpected for a city garden, but sobering. Lead levels were elevated and we had a low pH. The significance of the latter result only dawned on me as my panic turned into research. I learned that raising the soil’s pH would make lead unavailable to plants, and that the danger with lead is actually from inhaled or ingested dust, not from what – if any – is absorbed by plants. I dug in the first six pounds of crushed oyster shells to sweeten the soil. You can read more about this and my soil remediation efforts on my blog, 66 Square Feet (Plus). 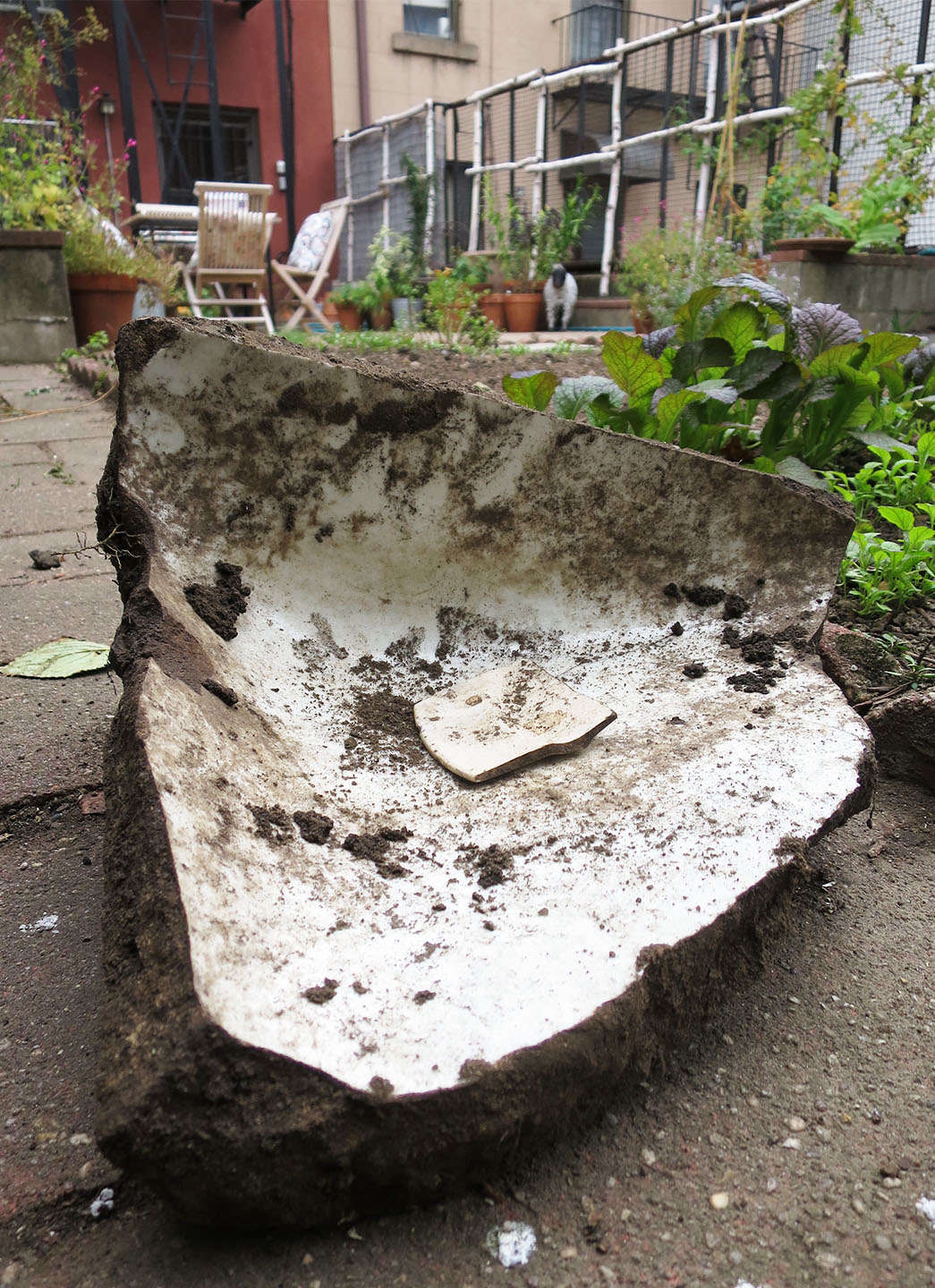 Above: I continued clearing out stones. I unearthed a bathroom sink. I bought perennials – angelica, echinacea, calamintha, agastache, veronicastrum, and Joe-Pye weed. In the vegetable plot I sowed cold weather greens. I transplanted some countryside stinging nettles to a sunny spot. I planted sweetfern. With space to spare this seemed like a good time to grow unusual crops that are usually foraged. 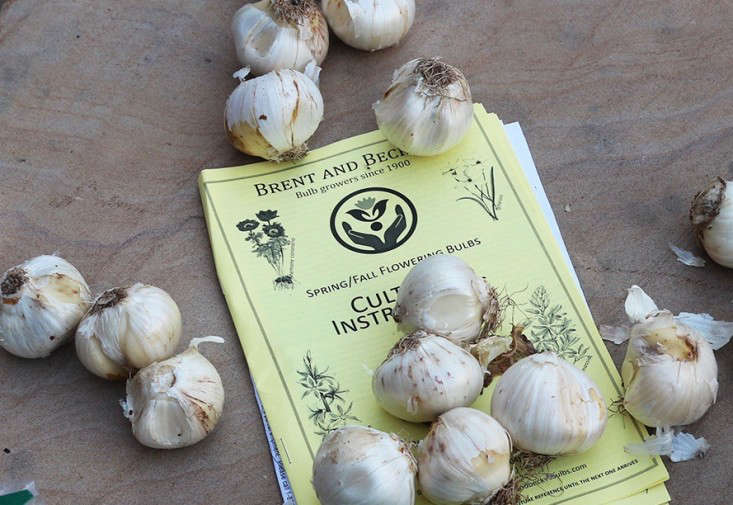 Above: Allium and camassia bulbs came from Brent and Becky’s. I impulse-bought Jerusalem artichoke tubers at a supermarket and planted them along the back, for some tall and indigenous privacy. 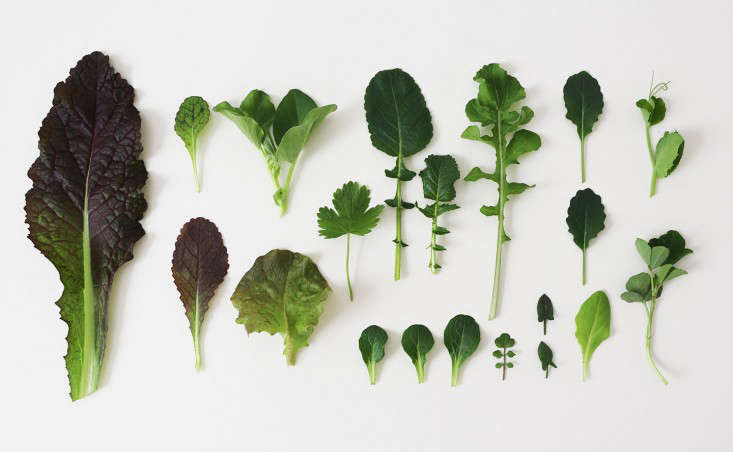 Above: Winter arrived late and in the middle of the month I was picking salad greens. 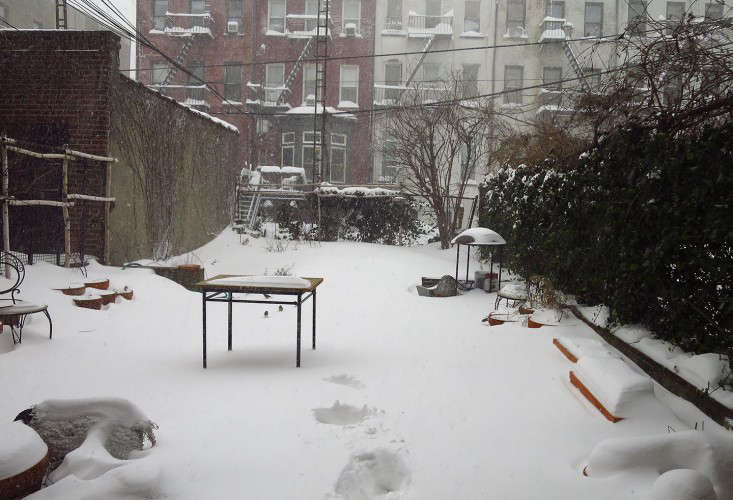 Above: Snow came at last and the concrete slab was hidden. 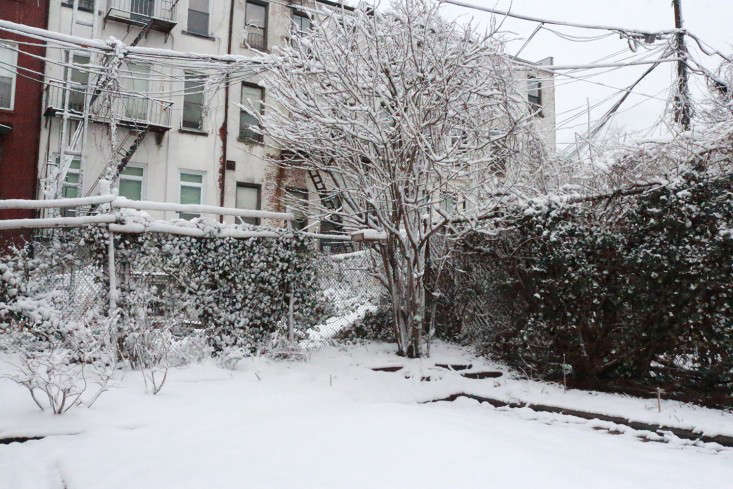 Above: In winter the lower sun did not clear our building and the whole backyard was in constant shadow. 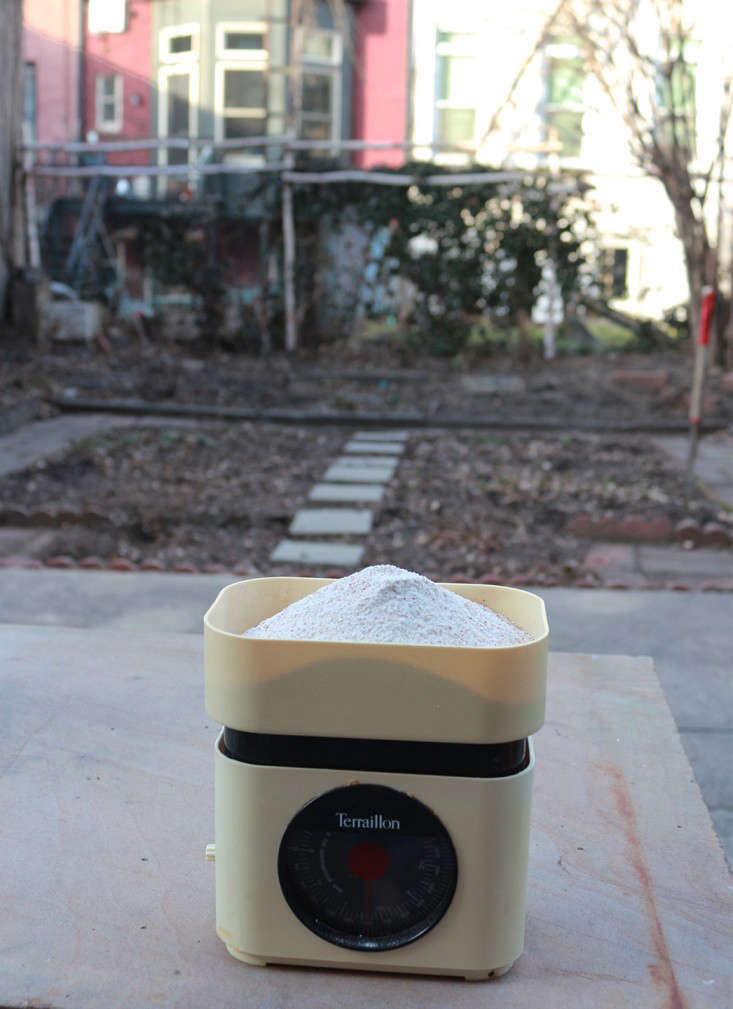 As soon as the soil could be worked I added crushed eggshells (a source of calcium, like the oyster shells) collected over winter to the vegetable plot. For step-by-step instructions, see Gardening 101: How to Use Eggshells in the Garden. 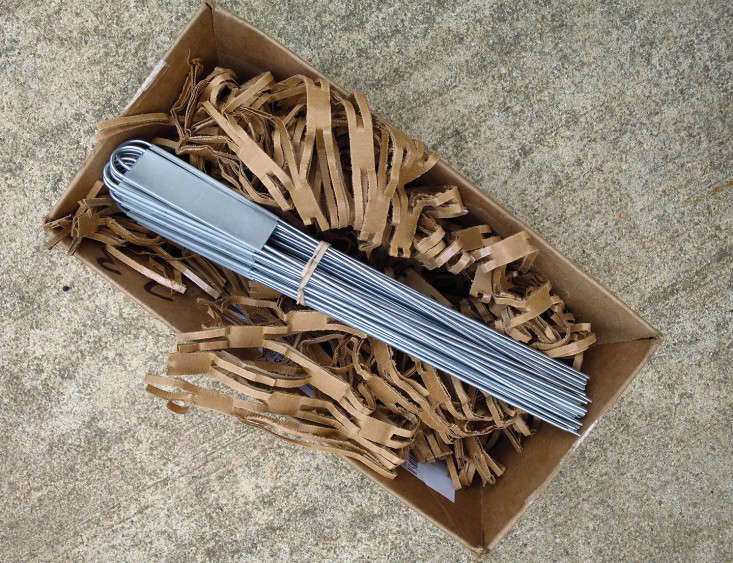 Above: I ordered row markers to keep order among the spring leaf crops. A set of 25 Vertical Row Markers by Paw Paw Everlast Label Co. is $16.96 from Amazon. 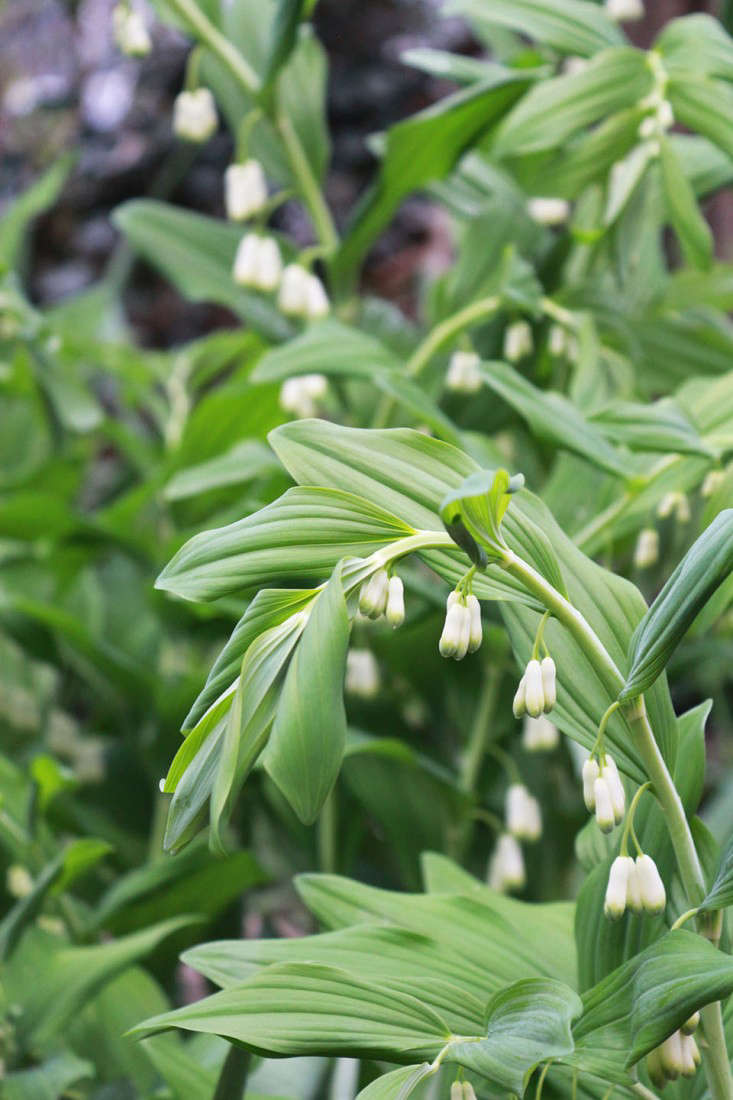 Above: The naturalized Solomons seal bloomed. 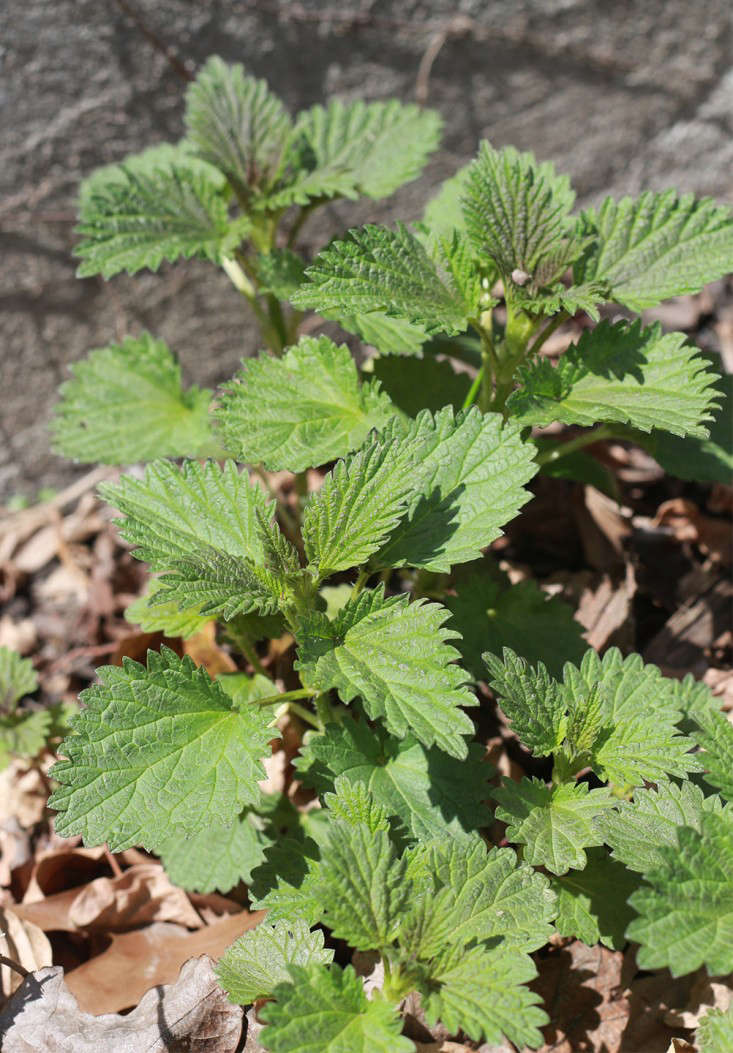 Above: The early nettles were ready to eat. I added eastern North American plants to the borders—ostrich fern, thimble flower, thalictrum. And our salad days began in earnest with our first crop of spinach. I planted fingerling potatoes. 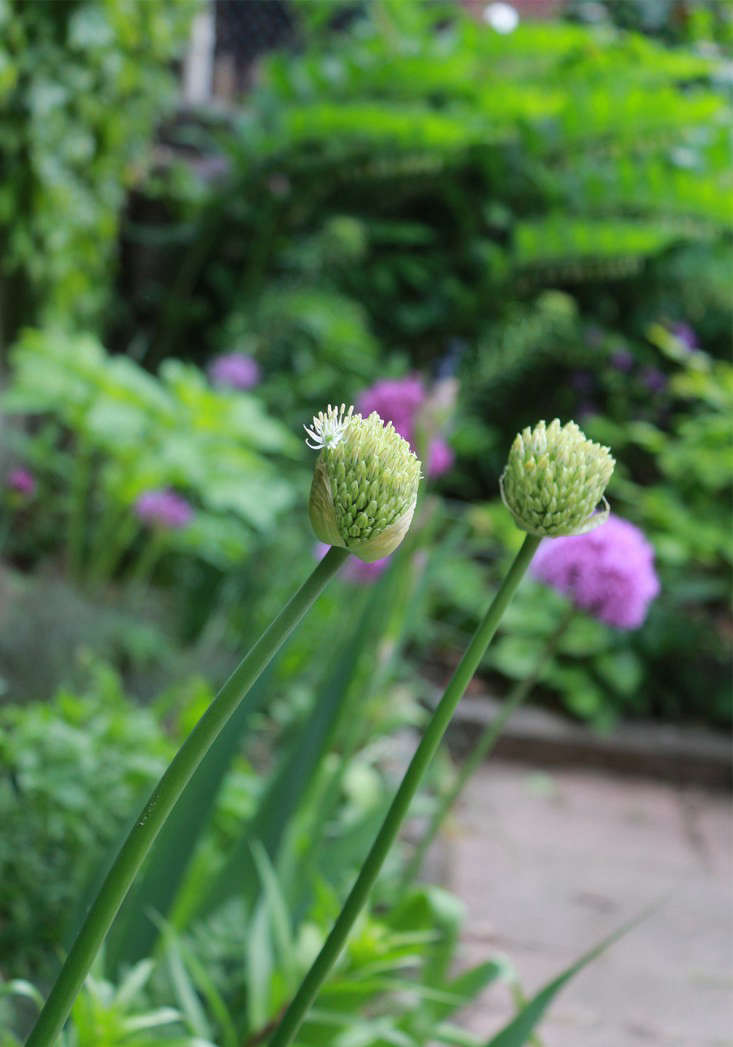 Above: Alliums planted in fall began to flower; beautiful, trouble-free, and tough. 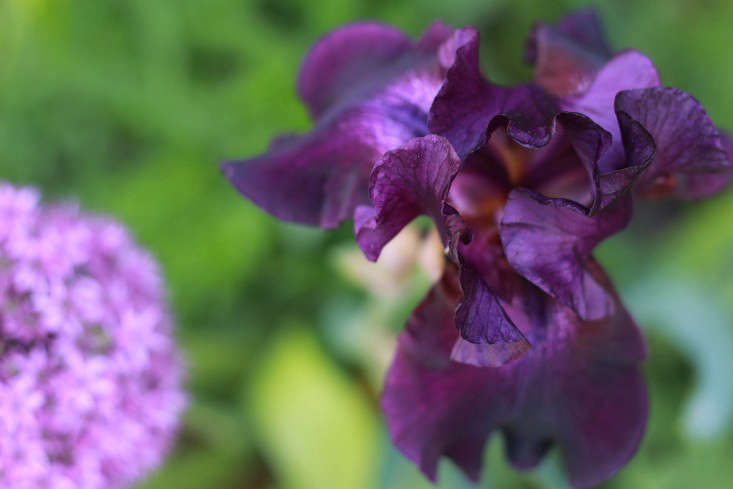 Above: Surprise irises opened, a rich and scented purple. 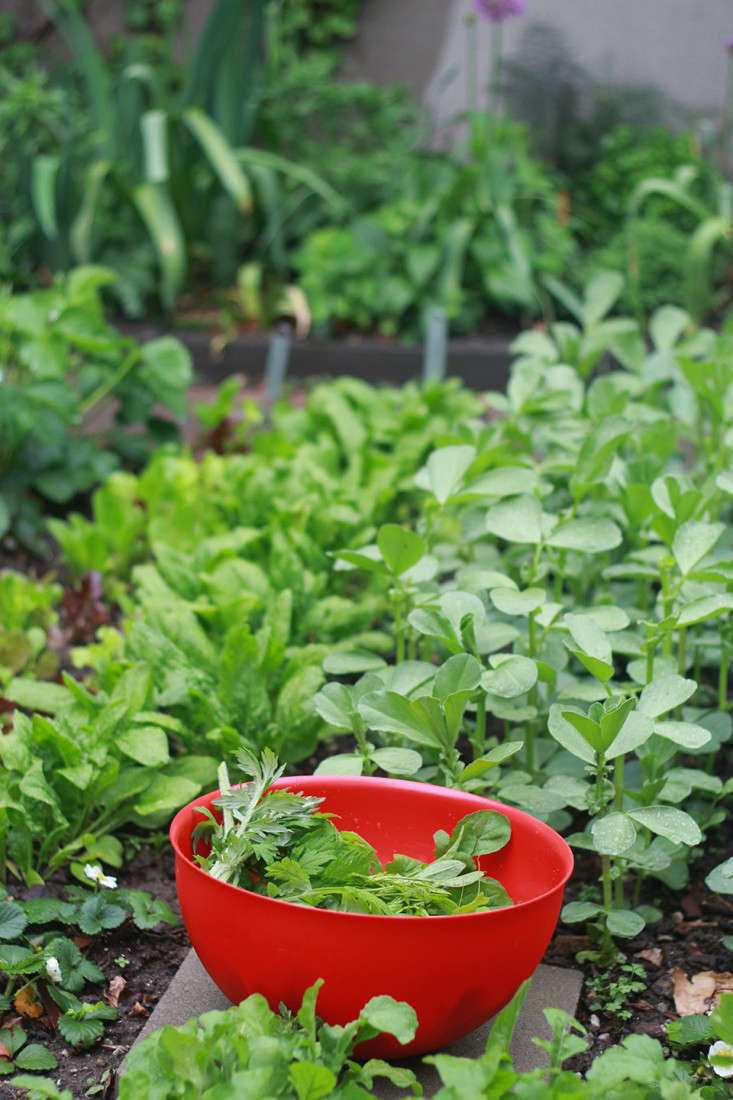 The vegetables plot now supplied all our salad needs. No need to shop for greens. 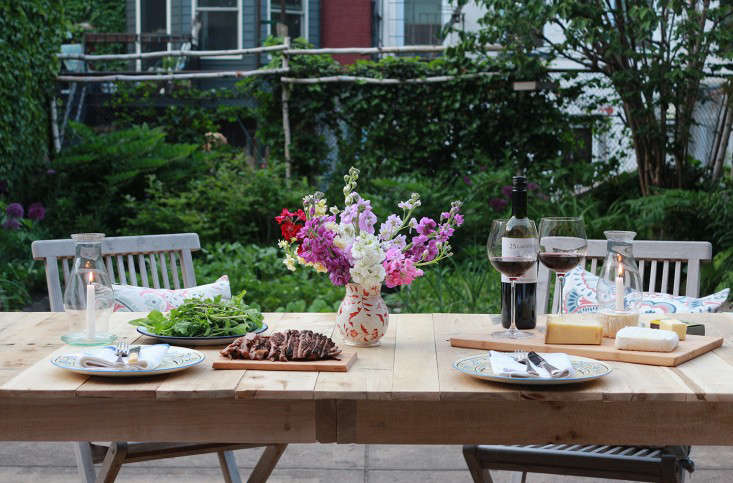 We ate outside every evening. We bought a long wooden table, room to spread out and a sun umbrella which doubles as an evening tent for privacy. 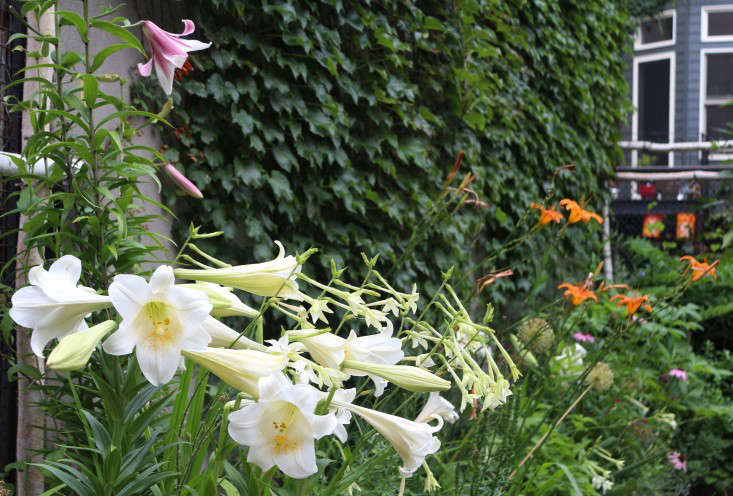 Above: Jasmine tobacco and Formosa lilies opened, scenting our evenings. 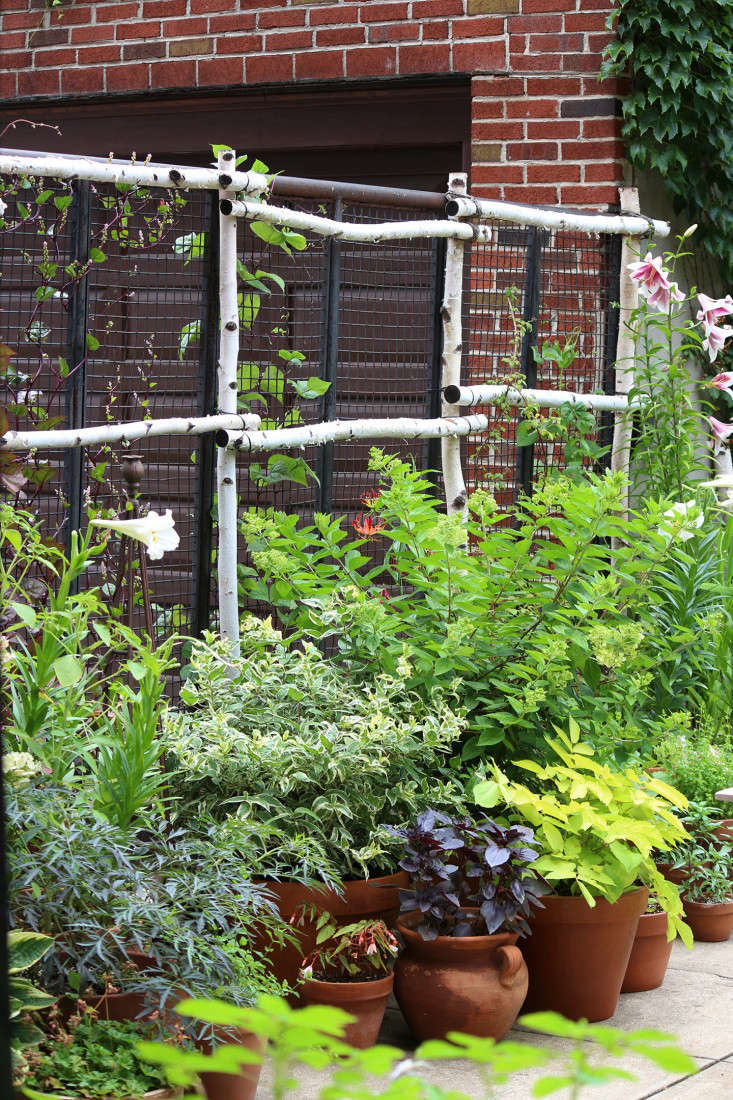 The bare area along the fence filled out and filled in. It’s not there yet, but it’s on its way. 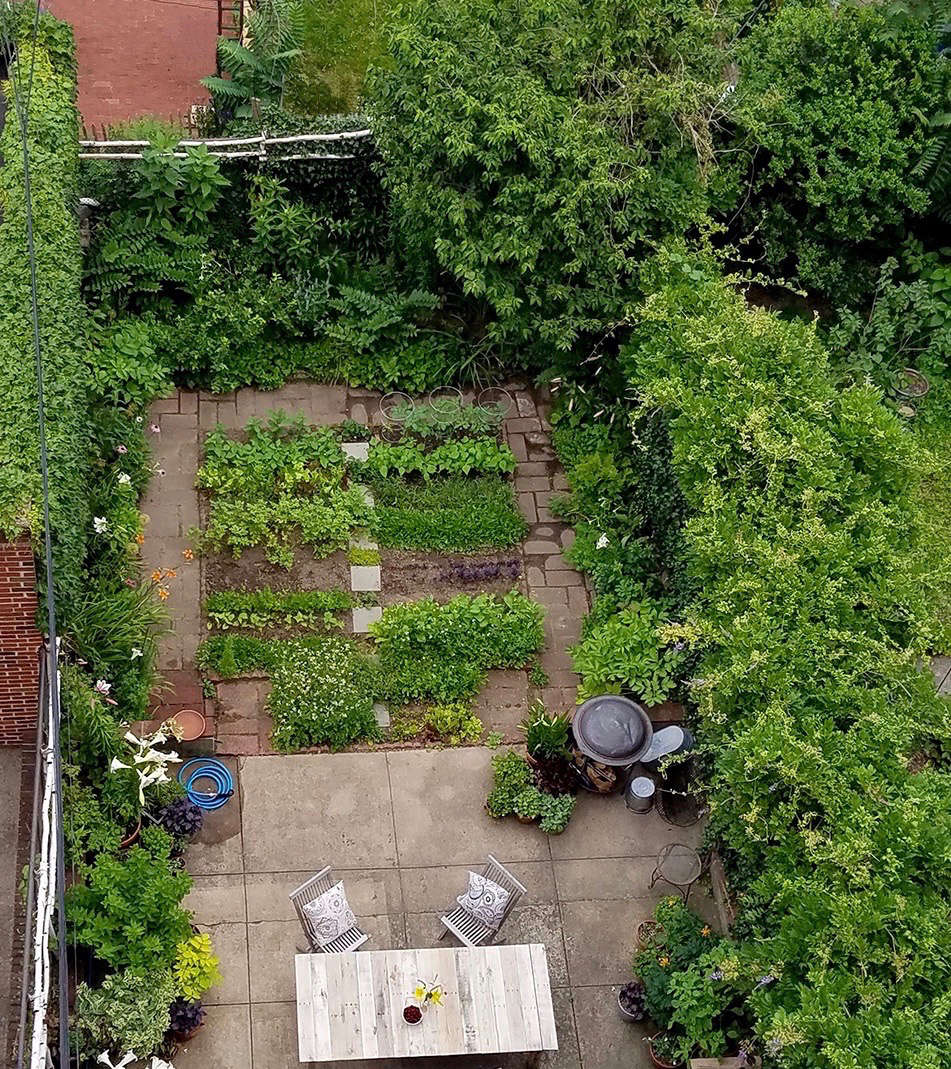 Above: “What would you have said,” asked my husband one recent night, as we ate our just-dug fingerlings outside, a year after our bad news, “if I had told you then that we’d be sitting here, now, watching dozens of fire flies dance in a new garden?” 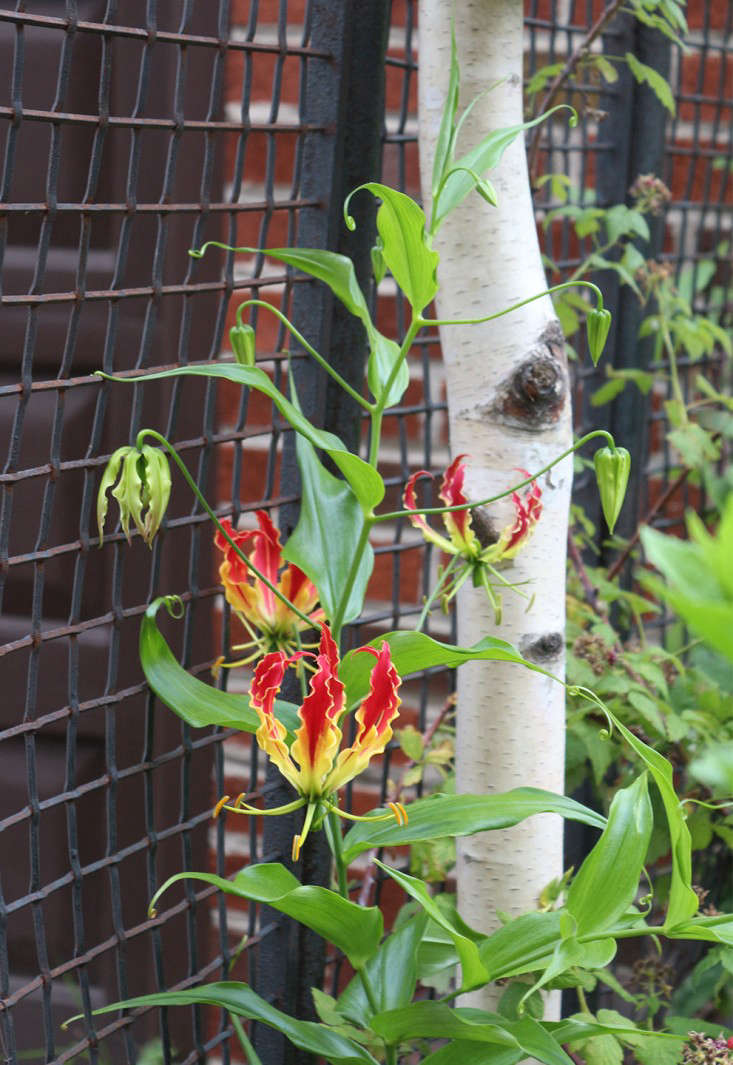 Above: Gardeners lead a split existence. While our hands dig, weed, plant, our heads see the future, and what will be born of our work. The future is a garden. To disturb us is to pull up a plant by the roots. We are left hanging until you put us in the dirt again.

So, no, I could not have imagined sitting in a new garden, with beans fattening, a forest of basil, gloriosas blooming on two new fences, and giant moths visiting the lilies at night. But here we are. And I’ll take the fire flies.

To visit Marie’s previous gardens in Harlem and on a tiny Brooklyn terrace, see Garden Visit: 66 Square Feet (Plus) on a Harlem Terrace and 10 Secrets for Growing an Urban Balcony Garden.

Current Obsessions: Under the Open Sky

Rethinking Jasmine: The Perfect Vase for a Fragrant Flowering Vine