Gowanus Nursery in Brooklyn is not in the neighborhood of Gowanus. Let’s just get that out of the way.

The nursery is now in Red Hook, Brooklyn, near the port life of New York Harbor, downwind from Pok Pok—a revered Thai restaurant—and within easy reach of the Brooklyn Queens Expressway, as well as the lush brownstone neighborhoods of Brooklyn Heights, Cobble Hill, and Carroll Gardens. In an open-air lot beside her indoor shop and home, owner Michele Palladino sells an intense mix of trees, shrubs and perennials, as well as plants she has propagated herself. 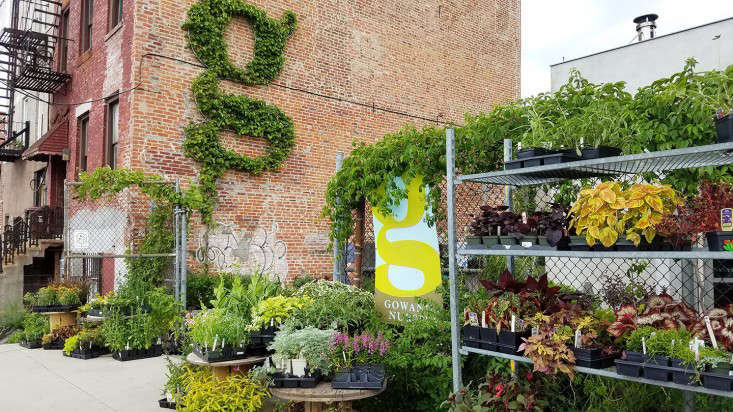 Above: The nursery was born in Gowanus in 2003, when Michele Palladino cleared a lot of Ailanthus trees and launched her business. Subject to the wild tides of local real estate, it has had to up-anchor twice ahead of development.

For five years home has been the Columbia Street waterfront, in a neighborhood changing so fast that longtime residents complain of whiplash. 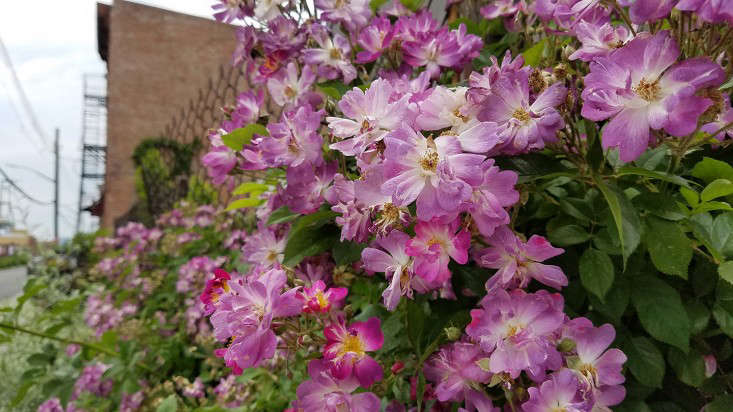 Above: For plant lovers the show starts early, on the sidewalk, where Michele rejuvenated a narrow strip between the concrete and the nursery’s yard. For Brooklyn author and rosarian-turned-baker Sarah Owens, a beautifully trained specimen of the heirloom rose ‘Veilchenblau,’ is reason enough for a visit. “Sometimes I stop in just to say ‘hi’ to that rose and end up going home with a splurge I don’t usually regret,” she says. 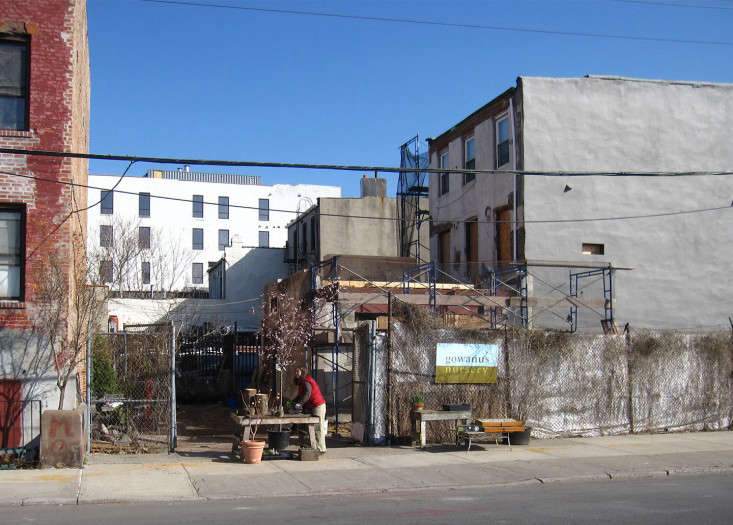 Above: The nursery’s 2011 beginnings were bare and uninspiring. Very hard work and time transformed the space. 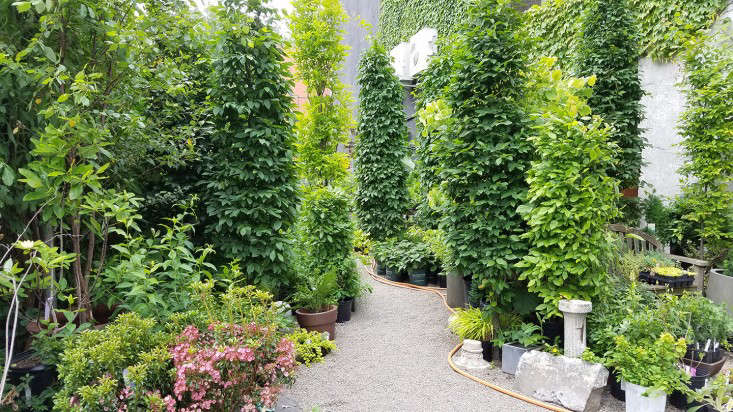 Above: Unlike most nurseries where the plants are transients, the Gowanus Nursery has a compelling assortment of permanent plantings. A Carolina hornbeam forest was planted right after Hurricane Sandy (when seawater flooded the building’s basement).”I didn’t feel it as a remarkable event at the time, but maybe it was,” says Michele. Since the hornbeams create “more shade than is reasonable in a nursery” the trees are trimmed back to slightly irregular columns. “The result is each tree has its own unique identity,” she says. And the forest is an anchor in a busy and physically demanding life: “If there’s one thing that makes me reconsider just dumping all the responsibility and embarking on a new life, it’s the trees.” 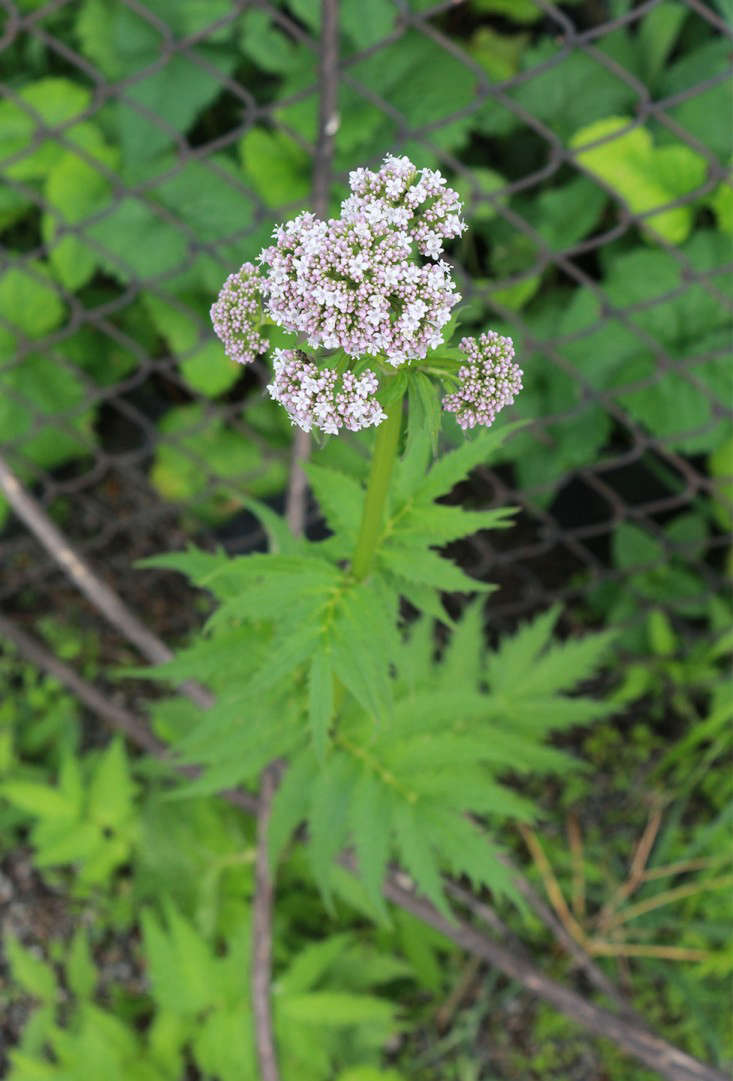 In mid spring sidewalk Valerian (a calming choice for stressed city gardeners?) begins to send up its tall flower stalks. 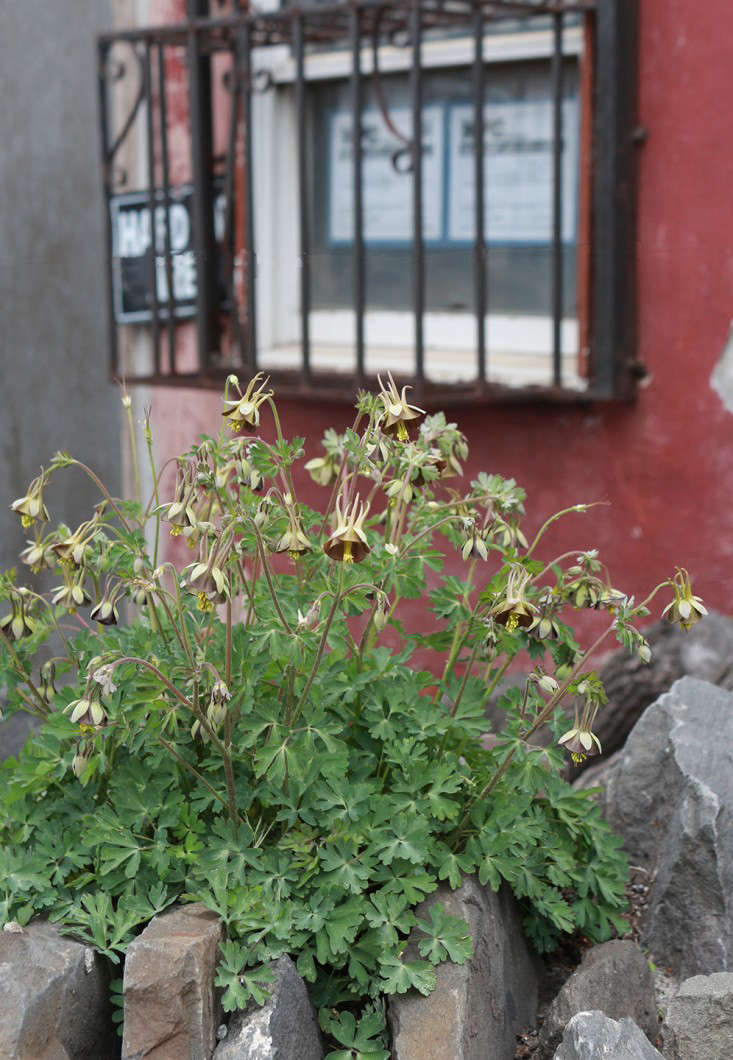 Above: A delectable columbine—Aquilegia viridiflora—beckons in a rock garden outside the nursery gates. Michele says that at least 50 of its seedlings will be potted up this summer for sale in fall or next spring. Something to diarize. 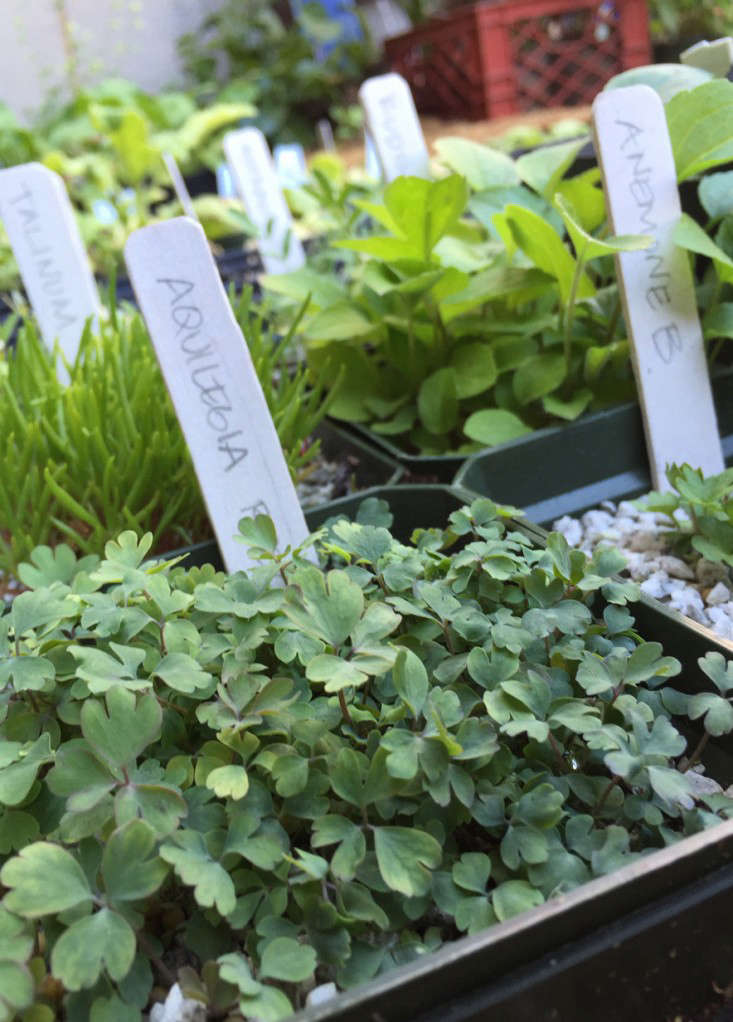 Above: “I’d be much more of a seed freak if I had more space,” she says. “We propagate in our spare time all season long.” 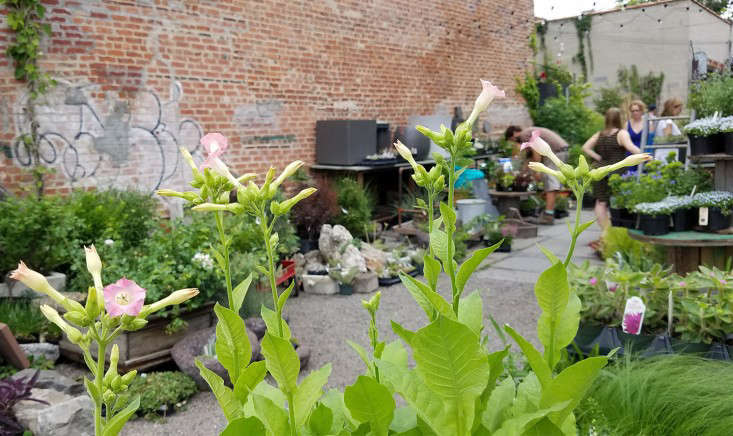 Above: While the nursery’s main customers used to be “gardeners of a certain age” says Michele, more and more younger customers are finding their way there, in part, she thinks, because the nursery has a dedicated houseplant space and because many younger people don’t have much, if any, gardening space in the expensive city. When the nursery doors are closed, from Monday through Wednesday (varying according to season), she designs, plants, and maintains gardens for private and corporate clients. 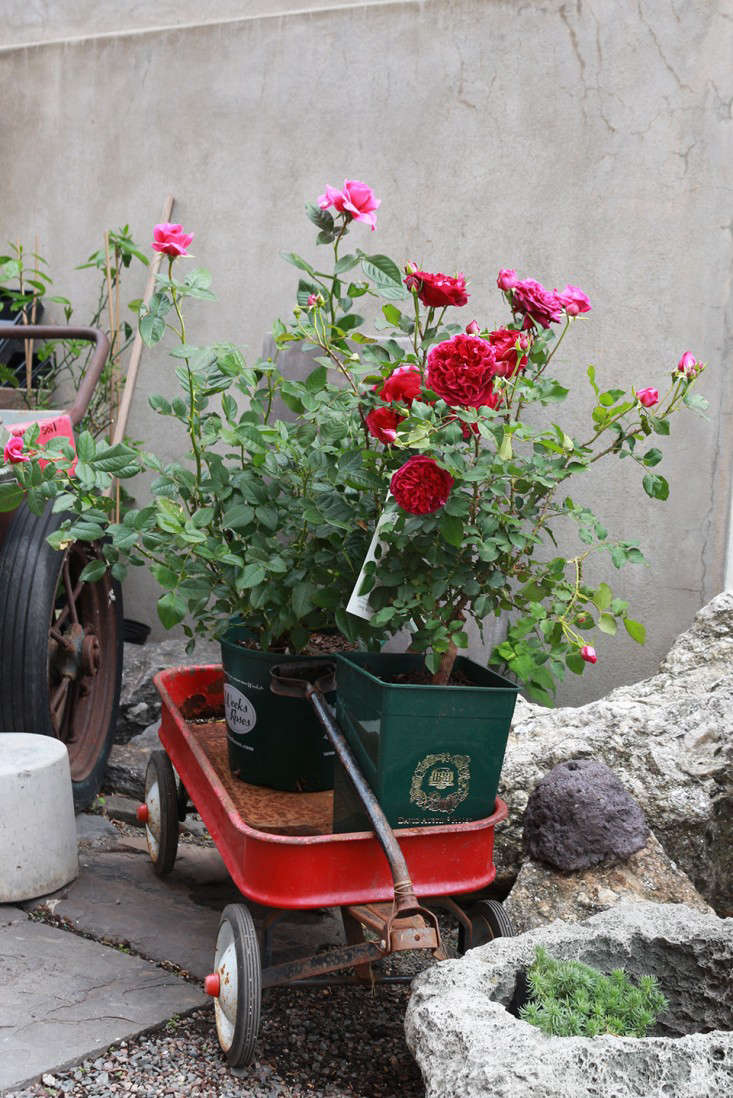 Above: Sarah adds that while her own garden design work sends her to wholesale growers, she shops at the Gowanus Nursery when she is looking for “extra-special plants,” as Michele has a  well-curated collection. “When I want to treat myself personally to something out of the ordinary, I go here.” 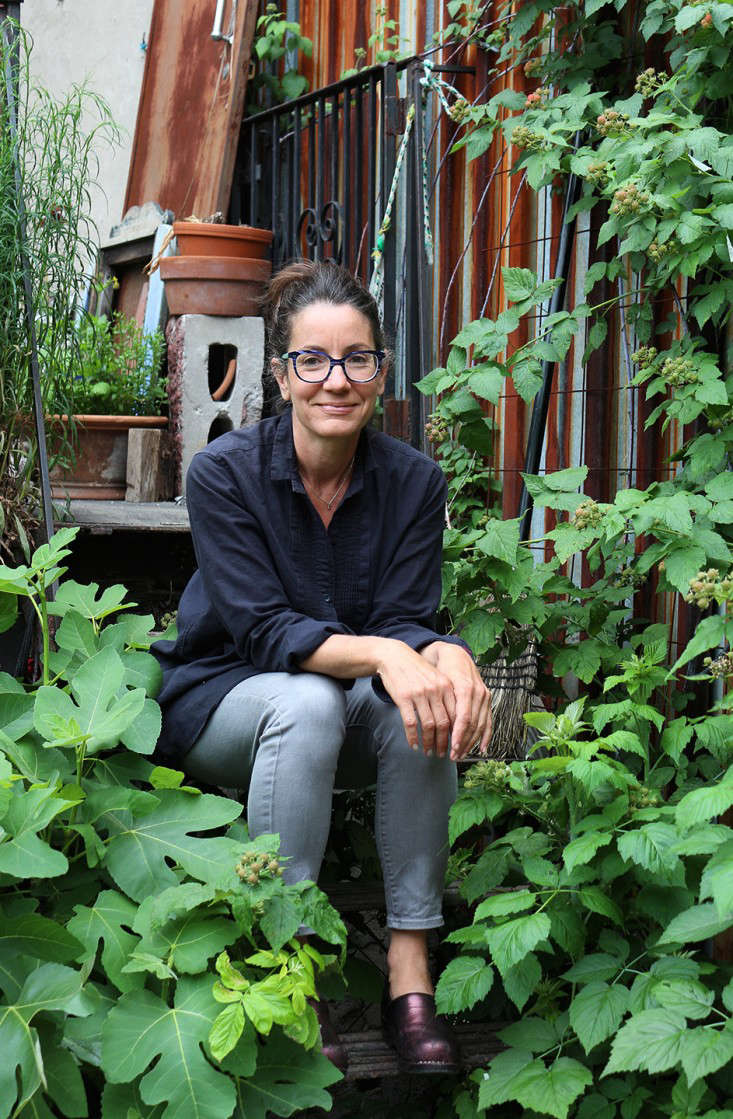 Above: Like many self-invented horticulturists, Michele’s background is a kaleidoscope of pursuits, each bringing her a step closer to nursery-owning life. While working in art conservation in the 90’s, she took care of the garden behind the restoration studio. She describes it as “a horrible place, full of rats, bad soil, and aggressive bamboo.” But it sparked an interest. On her days off she took a part-time job at a nursery, and after a subsequent stint in construction management began working for celebrity-landscape designer Edwina von Gal. “That’s where my real garden design education began,” says Michele. “She cracked open a lot of worlds for me, most notably a Capability Brown-like natural landscape aesthetic that took a while to have its full effect on me.” From there she worked a season with Martha Stewart and took away “a pretty solid understanding of garden mechanics.” 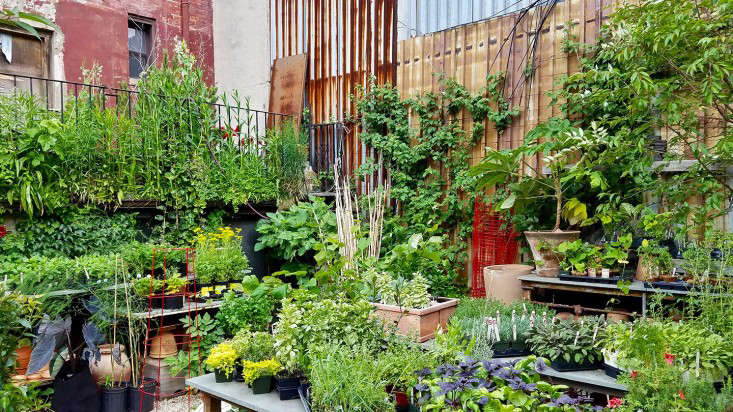 Above: To customers the nursery is an enticing green haven. Marielle Anzelone, the botanist-founder of Wildflower Week NYC describes it as “magical – beautifully arranged and thoughtfully designed. I love how she pulls in elements of the natural world (dead logs, large rocks) and uses them to create her stagecraft and as perches for plants. Wandering through the space it’s easy to forget that you are in a gritty Brooklyn neighborhood.” Michele says, “In a way I should be flattered because I guess we must be making it look effortless, but for me, there’s an intense physical and mental expenditure that takes place every week.” There are five deliveries a week, unloaded, placed, priced, and displayed, aside from the hard labor of planting gardens. “I’m aware of my dwindling resources in the physical arena, because they are put to the test day after day. The unloading of trucks is relentless in the spring. So I sometimes have people say in April or May ‘Are you going to get anything more?’ for the season and I just burst out laughing.” 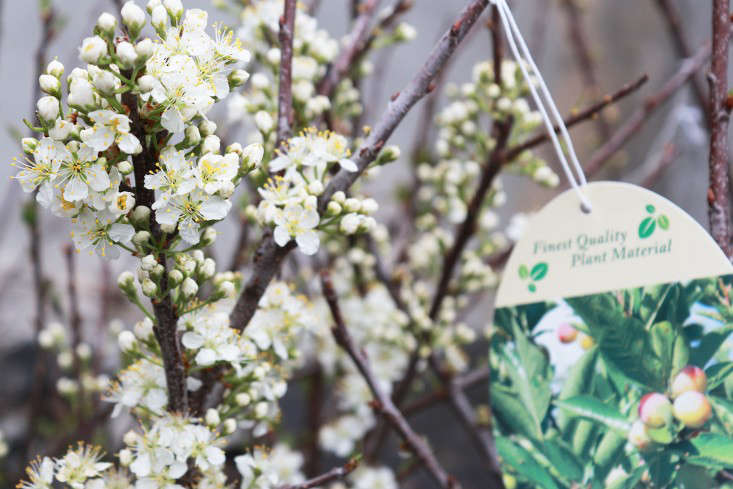 Above: Despite a relatively small footprint, the selection of plants in the nursery is diverse, and for a plant geek, irresistible. The selection of plants indigenous to the area is unusually good. Marielle says, “Gowanus is one of the few nurseries I know of that sells a wide variety of native species and promotes them as such.” 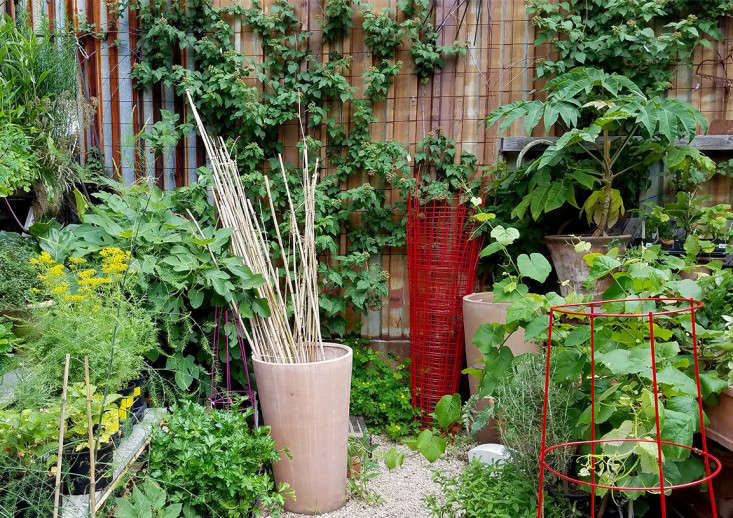 Above: In the kitchen garden section of the nursery an in-ground black raspberry (from the original Gowanus site) forms a backdrop against a south-facing wall, evidence of fruit that thrives in a city. Annual climbing spinach (Basella rubra), perennial Alpine strawberries, potted figs, and grape vines share space with aromatics and edibles. Sarah (the rosarian-baker) says that she is lured here by “the wide selection of obscure herbs.” 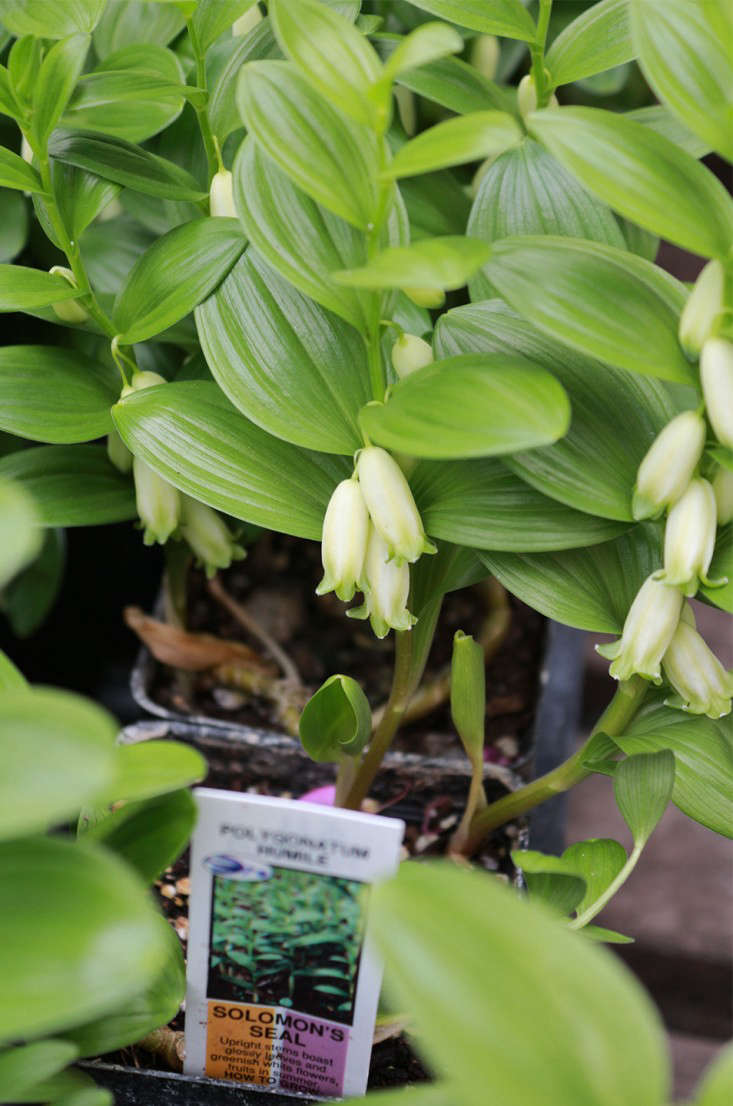 Above: Dwarf Solomon’s seal (Polygonatum humile) is handy for gardens that cannot accommodate the generous arching clumps of its full-size relative. Local horticulturist Dodo Loechle says about the nursery’s plant menu: “I often recommend it as a place where one can get unusual plants and shade plants.” Garden designer Julia Miller of Four Gardens recently ordered 60 of the full size Solomon’s seal, and says she was grateful for their gentle treatment. “I saw a staff member spending much time unwrapping them and taking great care to not bend them as they came out of the boxes from Minnesota.” She adds that Michele has been “incredibly accommodating—ordering many hard-to-find native species…” 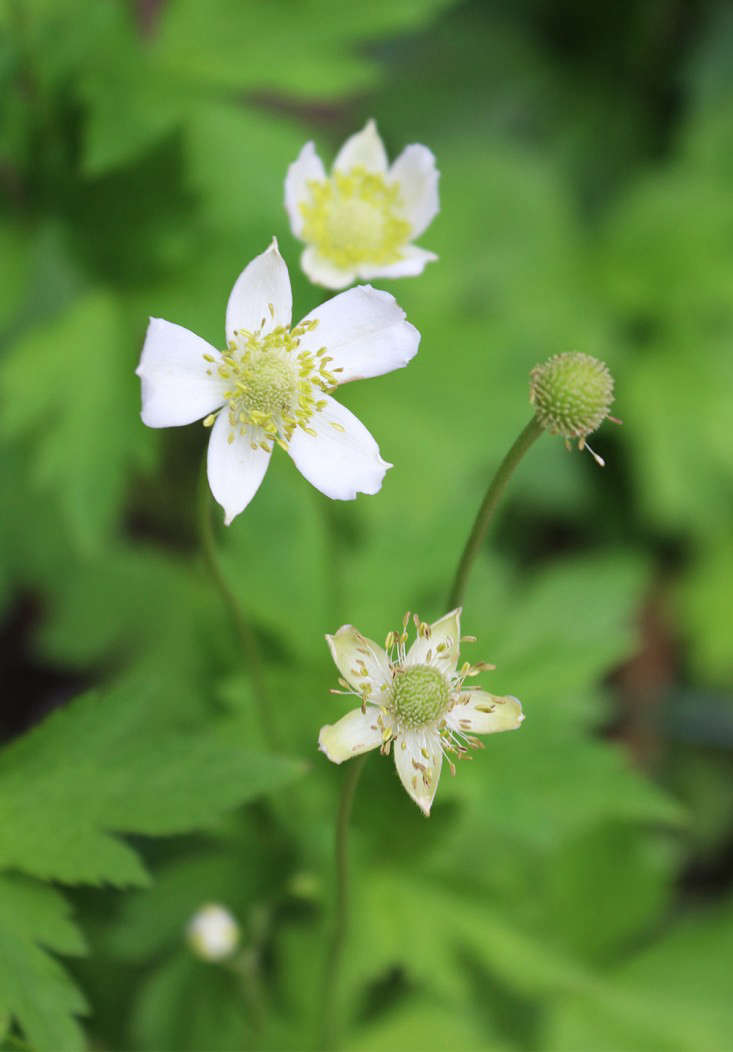 Above: In my own challenging Brooklyn garden, where sun and shade mix, my plant palette has been expanded by the selections at the Gowanus Nursery. Indigenous Anemone virginiana (tall thimbleweed), sweetfern (Comptonia peregrina), and Culver’s root (Veronicastrum virginicum) flourish, and striking Ligustrum japonica thrives in large clay pots. Walking the rows and shady nooks of the nursery is an education. 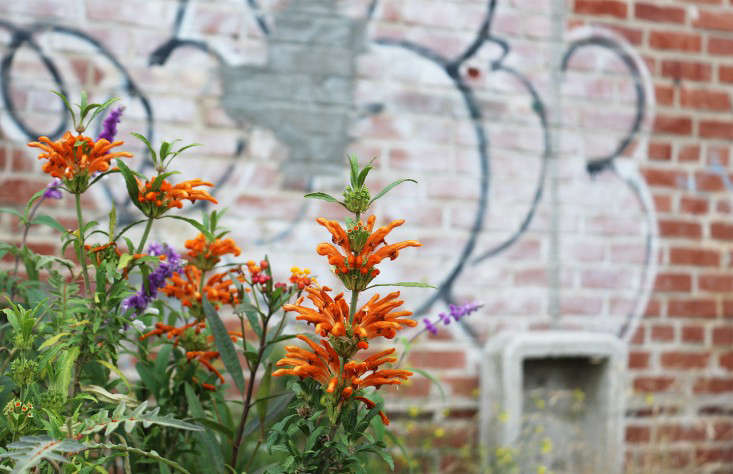 Above: South African native Leonotis is a hummingbird magnet for the birds on their annual return flight. Fresh arrivals at the nursery speak to each growing season and change the botanical drama.

Why shop at an independent nursery? “The Internet is great,” answers Michele, “but it’s not the same as being in someone’s world, that will make you think differently. And I don’t think anyone goes to Lowe’s for enlightenment.”

For more of our favorite Brooklyn plant shops, see Shopper’s Diary: GRDN in Brooklyn and Stems: Brooklyn’s Only Flower Shop in a Bar.

Steal This Look: A Bohemian Screened Porch in Texas

Plant-Based Diet: How to Grow 5 Delicious Foods You Never Find in Shops