Along the coastline of Connecticut in the town of Westport is a neighborhood called Saugatuck, a native American word that means “mouth of the tidal river.” When landscape architect Janice Parker went there to take a look at a client’s recently purchased property at water’s edge, she saw the house was new, the lot small, and the neighbors very visible.

“The client had bought the property because she was frustrated with the town; she had been in another house she loved and was getting older and wanted to have an elevator, but they wouldn’t let her put one in,” says Parker, whose firm Janice Parker Landscape Architects is based in nearby Greenwich, Connecticut. “They said it was possible to put one in a new house but not in an old house. It was the code. So she built this house to be able to age in place.”

The challenge? The client wanted a simple and lush garden with year-round interest and a strong architectural design (particularly for the backyard, where she wanted to focus attention on the view of the water).

The solution: Parker laid an axial line off the center of the property and kept the middle of the back garden “very simple and clean, to protect the view out to the water,” she said. “The action is on the two sides of the property.” 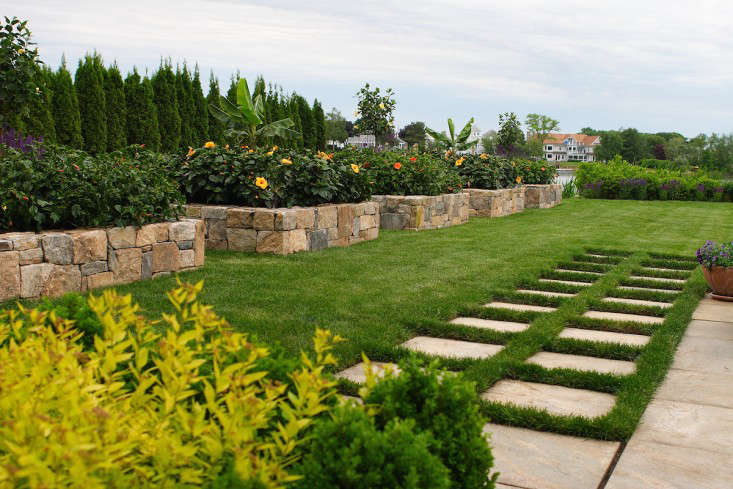 Above: In the backyard is a procession of raised beds, a row of “five strong planters spaced so the very ugly manhole covers in between them, which are for drain-out and maintenance on the coast and can’t be grassed over, can’t be seen,” says Parker. 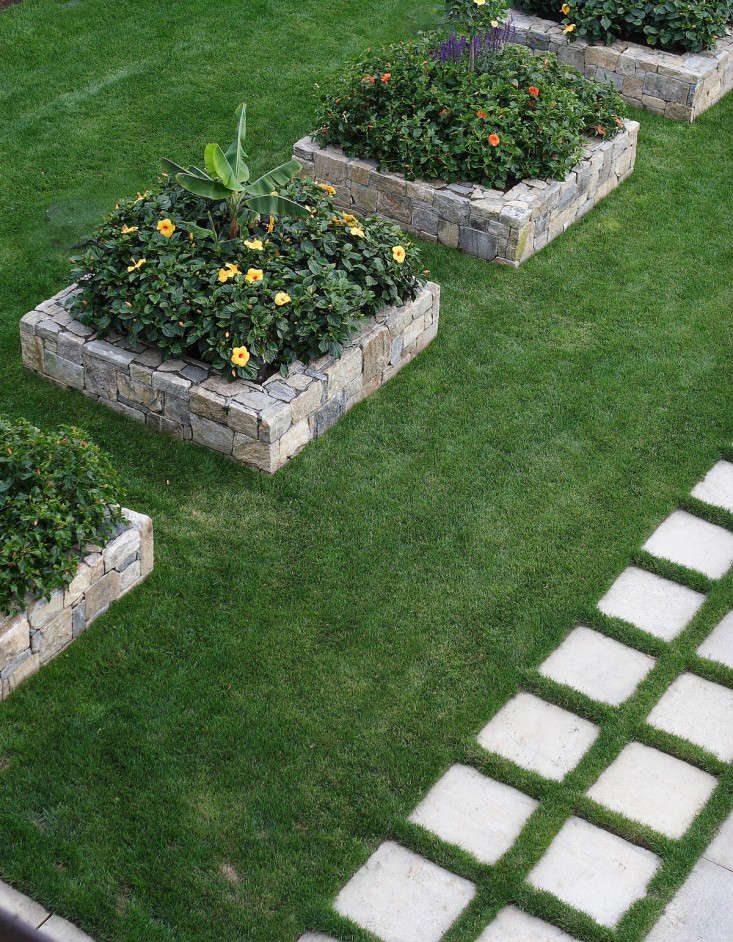 Above: In the planting beds, the client “loves to mix it up every year,” says Parker. “One year she planted them with tropical plants, such as hibiscus and bananas.” 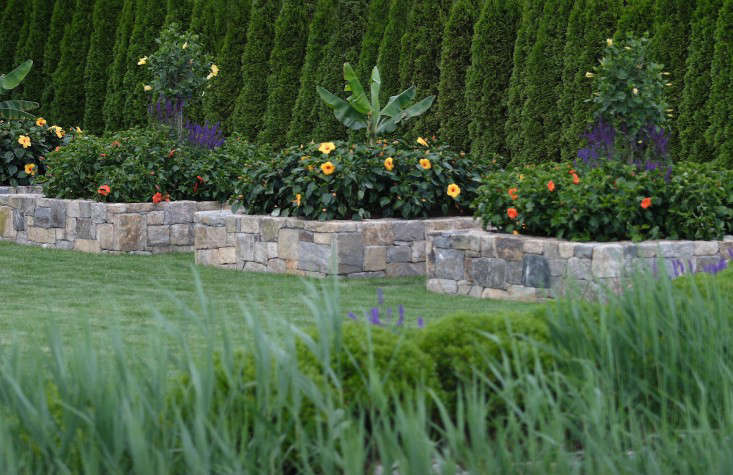 Above: A banana plant (at center) is surrounded by hibiscus. 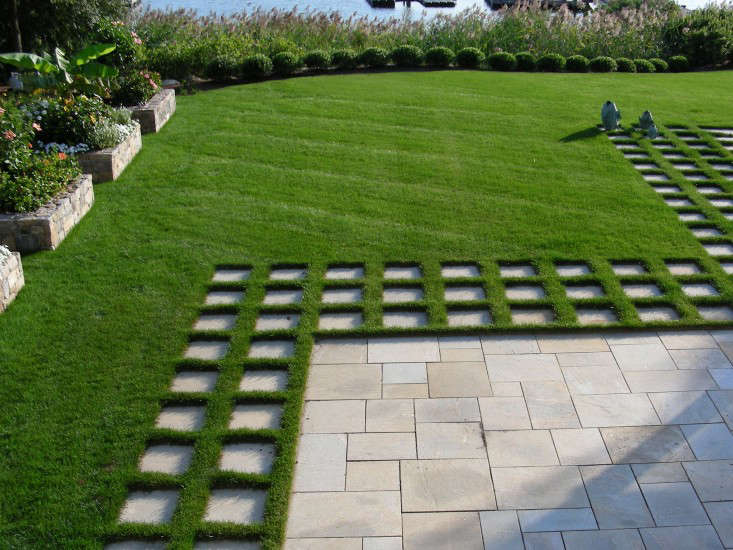 Above: In the center of the backyard is a terrace paved with Cedar Lake granite. The gold- and cream-colored pavers are used throughout the property to tie all the hardscape elements to one another. “It looks very soft and beachy,” says Parker. “She used it inside the house as well.”

The geometric pattern of the pavers “draws your eye to the water in the distance and adds interest to the terrace,” says Parker. 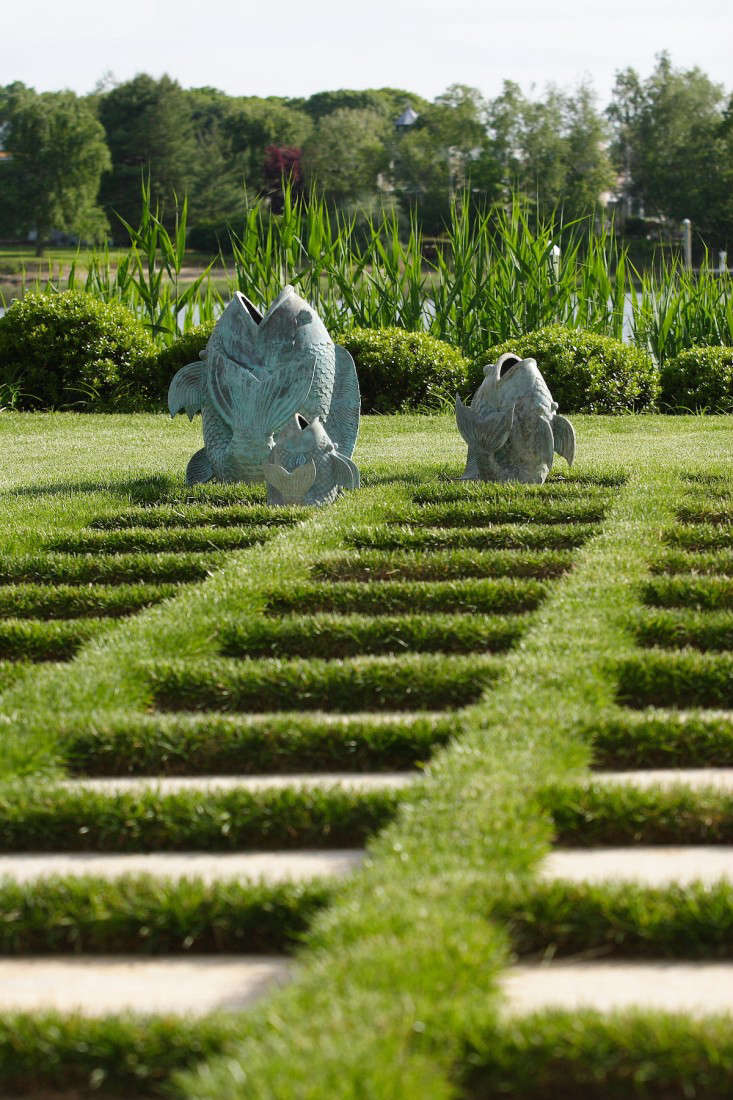 Above: “The grass joints between the pavers make the stone much more palatable,” says Parker. “At the end of the day, you should look out at a landscape and say ‘Mmmm,’ and that’s because you see the natural, growing part.  Stone feels dead and I prefer it when stuff is crawling all over it.”

The sculptures of leaping fish were part of the client’s existing collection.  “She surprised me with them, and they’re wonderful,” says Parker. 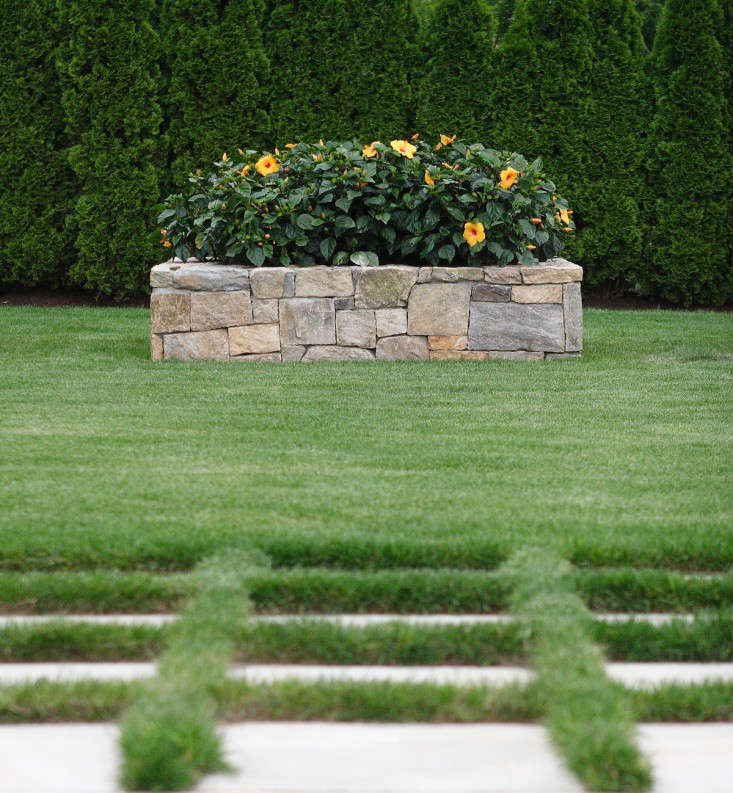 Above: The key to getting the grass joints to grow lush and pillowy is to “dig deep,” says Parker. “Under the pavers you need to lay a solid underpinning of stone dust and gravel. After it’s hardened a little, come back and dig out the joints, about six inches, and then pack in topsoil and sod higher than you think you need to—it compacts.

“You will get die-back from the heat of the stones, but if you water well, the grass in the joints will acclimate,” she says.

For a turf lawn, Parker prefers to start with sod rather than seed because sod’s dense root system leaves no room for weeds to take hold.  “A local sod farm will have the best mix for your environment,” she says. 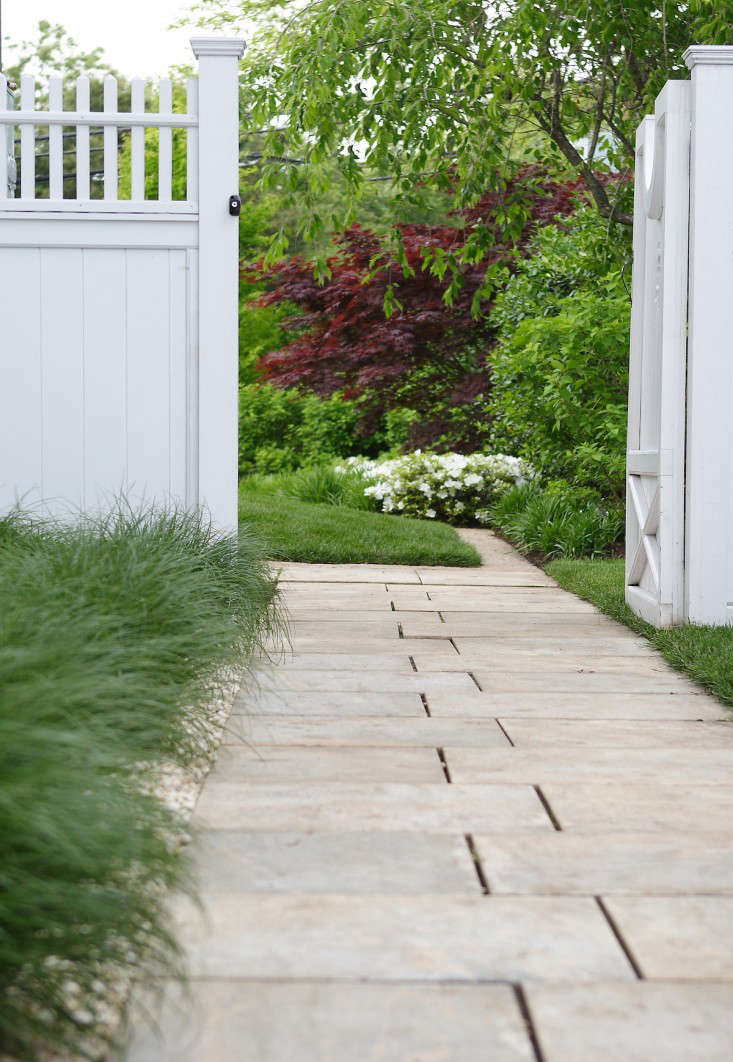 Above: A path of staggered Cedar Lake granite pavers along one side of the house is edged simply with grasses. 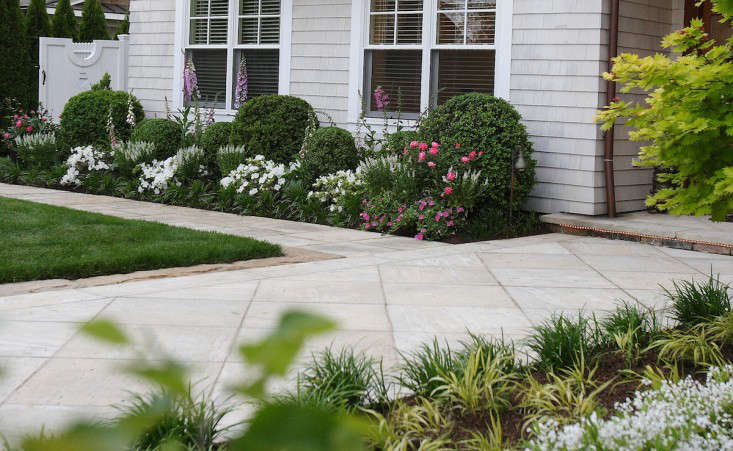 Above: In the front garden, the client requested color. “I broke my rule of no color in front of the house,” says Parker. “A front garden should look good twelve months of the year, and so you create boundaries and good bones with the shapes.” 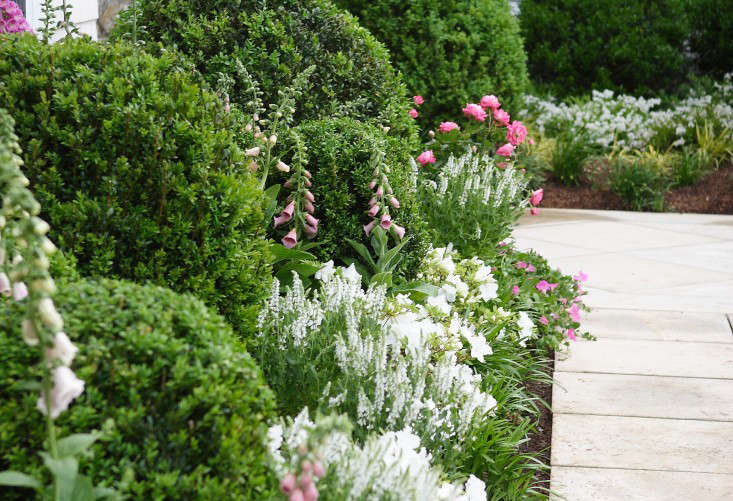 Above: Planted against a backdrop of evergreen boxwoods (which look good year-round) are salvias, veronicas, foxgloves, and a deep pink rose. “Foxgloves are as undependable as they can be, but they’re just one of my favorites,” says Parker. “I love everything about them.” 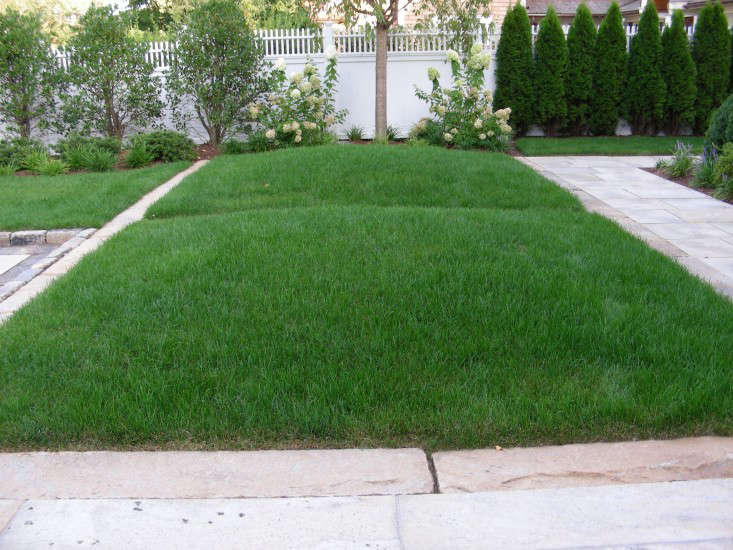 Above: To add interest to the front lawn, Parker created raised pillows of grass. The technique? “Grade the soil up in the center and pitch it out gently, keeping in mind that over time it will compact,” says Parker. “Start with the center at a height of eight or nine inches above the edges if you want a gentle six-inch slope. 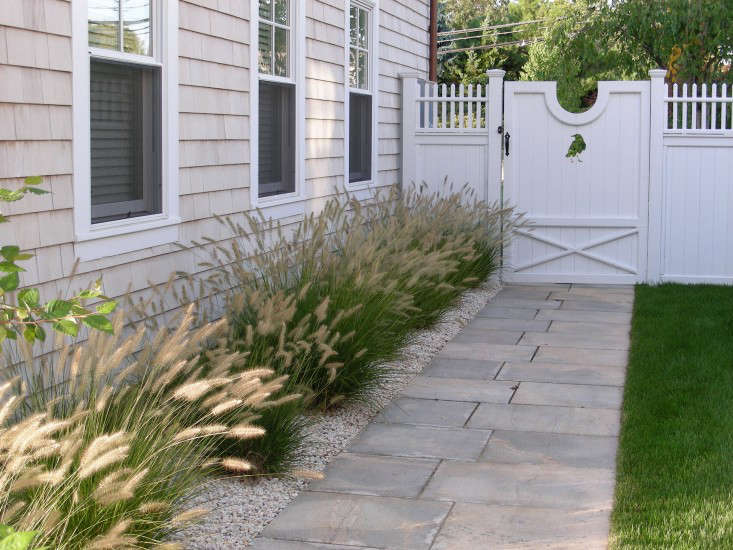 Above: The client is a very serious collector of original Edgar Allan Poe work; hence the raven in the gate. 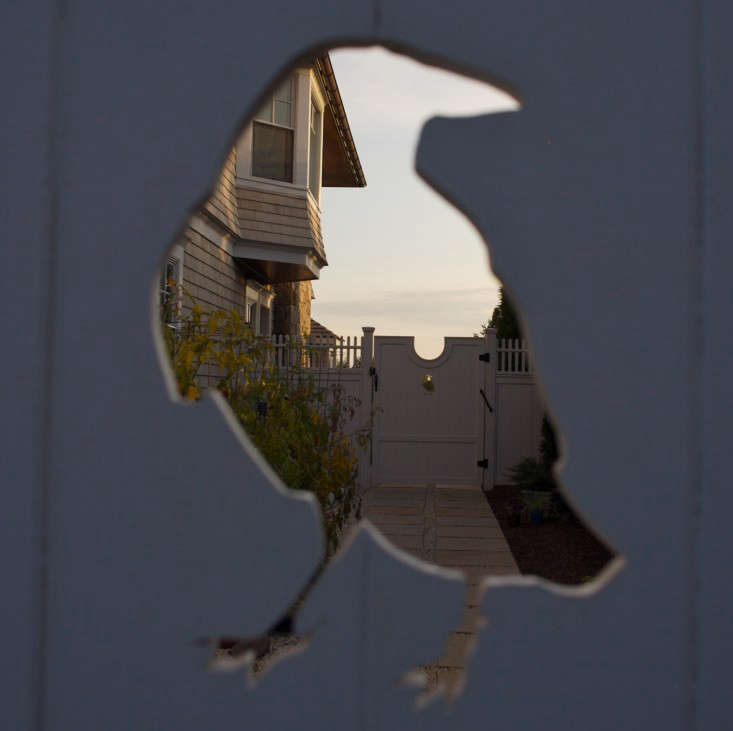 Above: “In every garden, we like to use a personal icon, and a fence is pretty nice place to do it,” says Parker. “We had a signature bird cutout made for her specifically.”

For more of landscape architect Janice Parker’s work, see Ask the Expert: 8 Ways to Add Pattern to a Landscape.