Sipping coffee on the patio every morning with a host of birds, doing a daily chameleon count, and picking flowers from the garden became my new rituals. 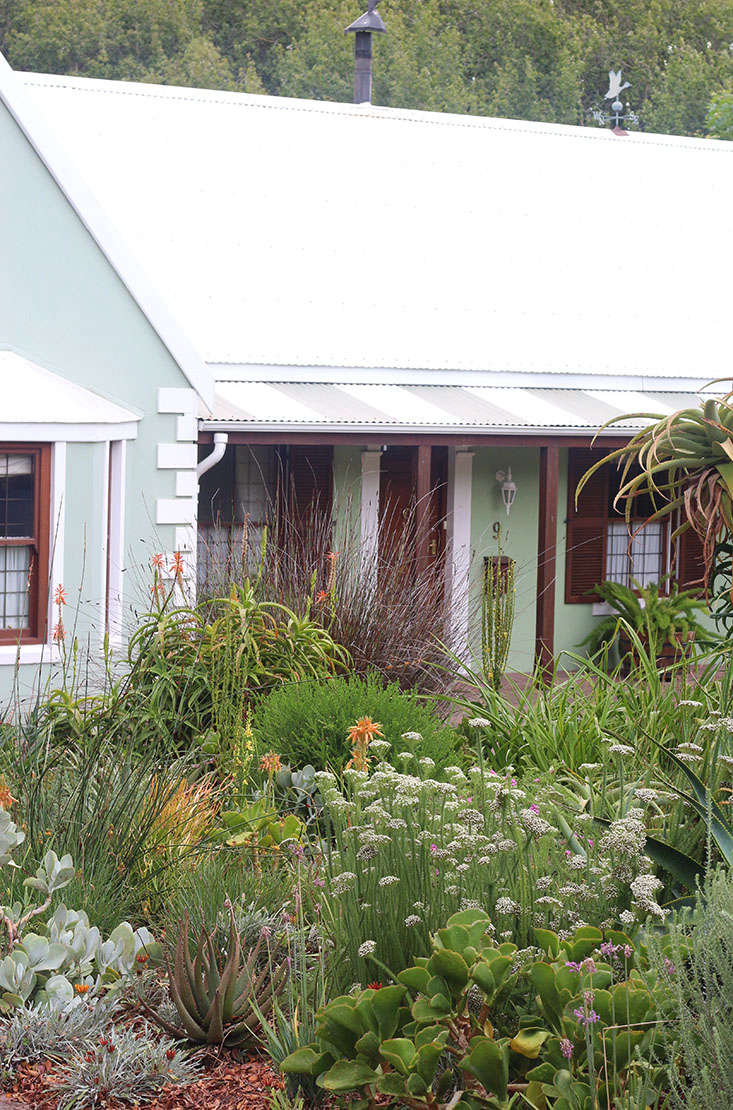 Above: On the dry sidewalk in front of No. 9, in full sun, in the sandy soil of Cape Town, the plants must be resilient. They receive little to no supplemental water. With an assortment of drought-tolerant southern African plants, including Cotyledons, aloes, and fynbos species, the so-called succulent bed is designed to be as water wise as possible. 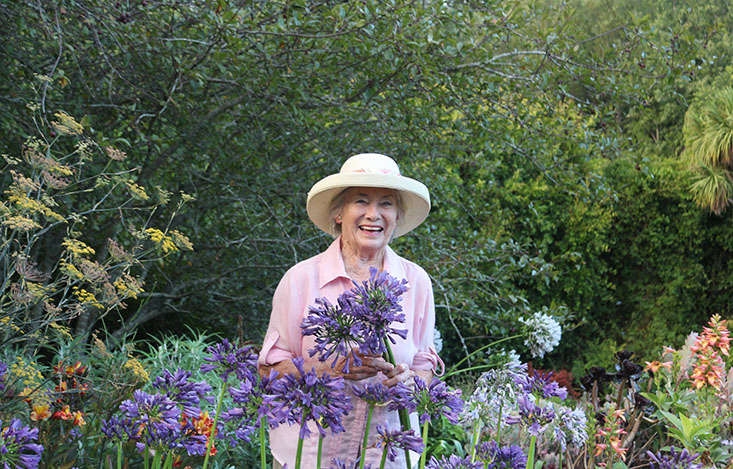 Above: My mom, Maureen Viljoen, has been gardening here for 33 years, and is happiest in her garden. Now 83, and in serious pain from degenerating discs in her lower back, as well as arthritis, she still picks flowers for the house from the ample supply in her perennial beds. 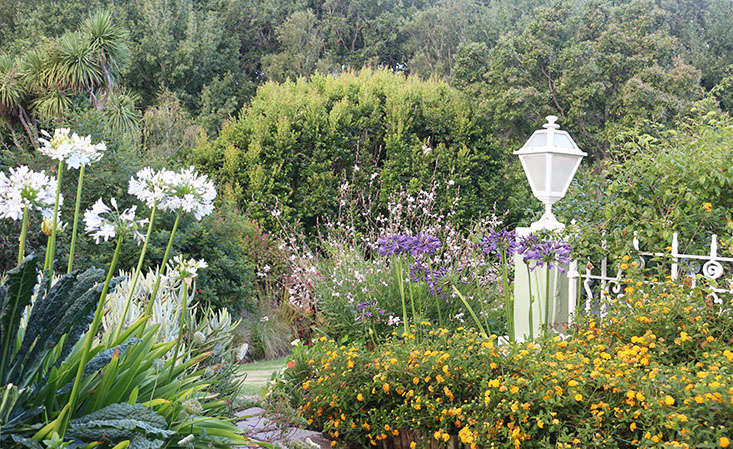 Above: Hidden from the street, the garden proper grows in soil that has been enriched by decades-worth of compost, much of it generated in-house by a three-compartment compost pile in a shady corner. Agapanthus, the-kale-that-wouldn’t-die (lacinato), low maintenance yellow lantana, and gaura—a Texas native—are at their peak after the summer solstice. 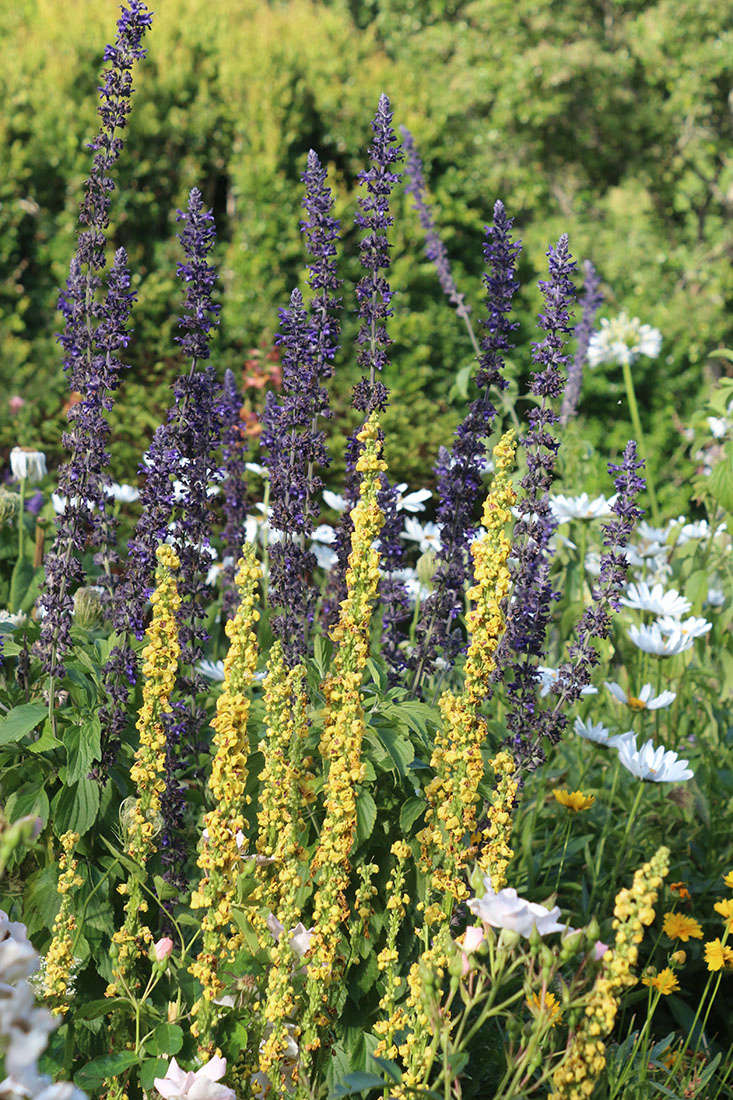 Above: Past midsummer the vertical spikes of salvia and verbascum are a duel of yellow and blue. 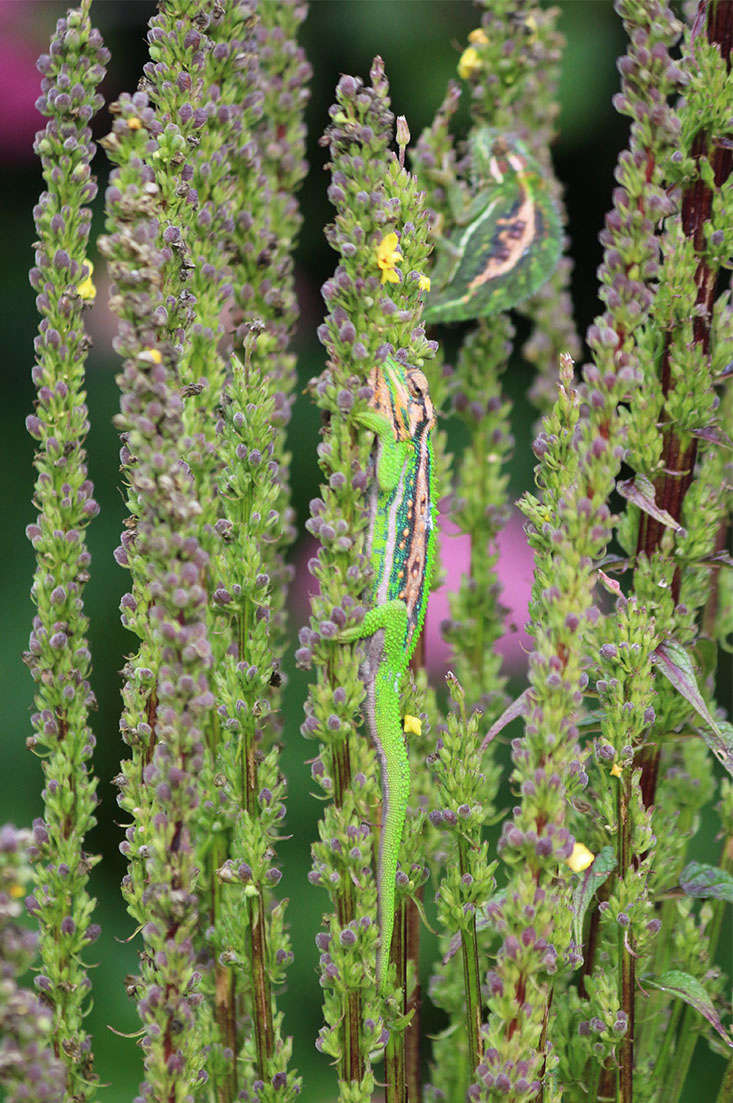 Above: My mother leaves the spent flower spikes of veronicastrum in place for as long as possible: they are a favorite hunting spot for the resident Cape dwarf chameleon population. The little garden dragons feast on flying insects. 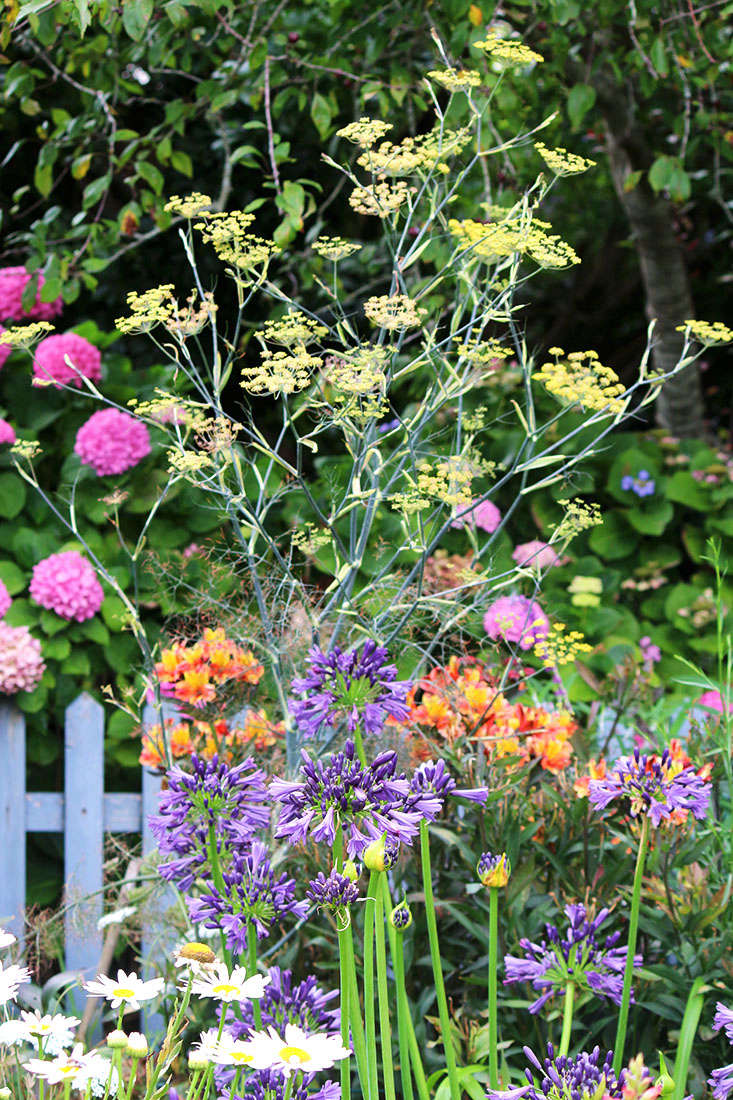 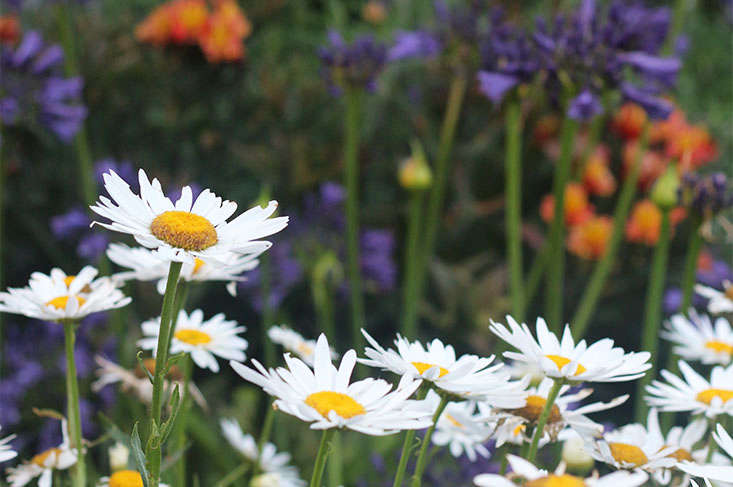 Above: Requiring nothing more than deadheading, indestructible Shasta daisies (Leucanthemum x superbum) are a long-blooming summer stalwart as well as a magnet for the beetles that the chameleons relish. 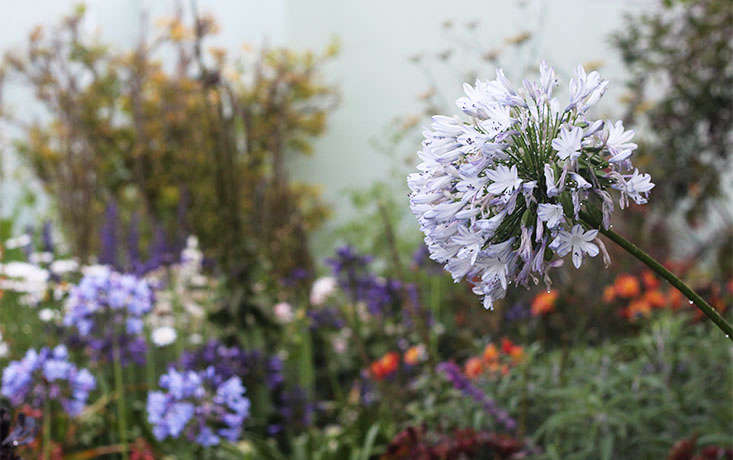 Above: Recently under serious threat from an insect pest called the agapanthus borer, my mother’s collection is recovering and has been rejuvenated by some fresh stock (the nursery at Kirstenbosch National Botanical Garden is a happy 15-minute drive away). 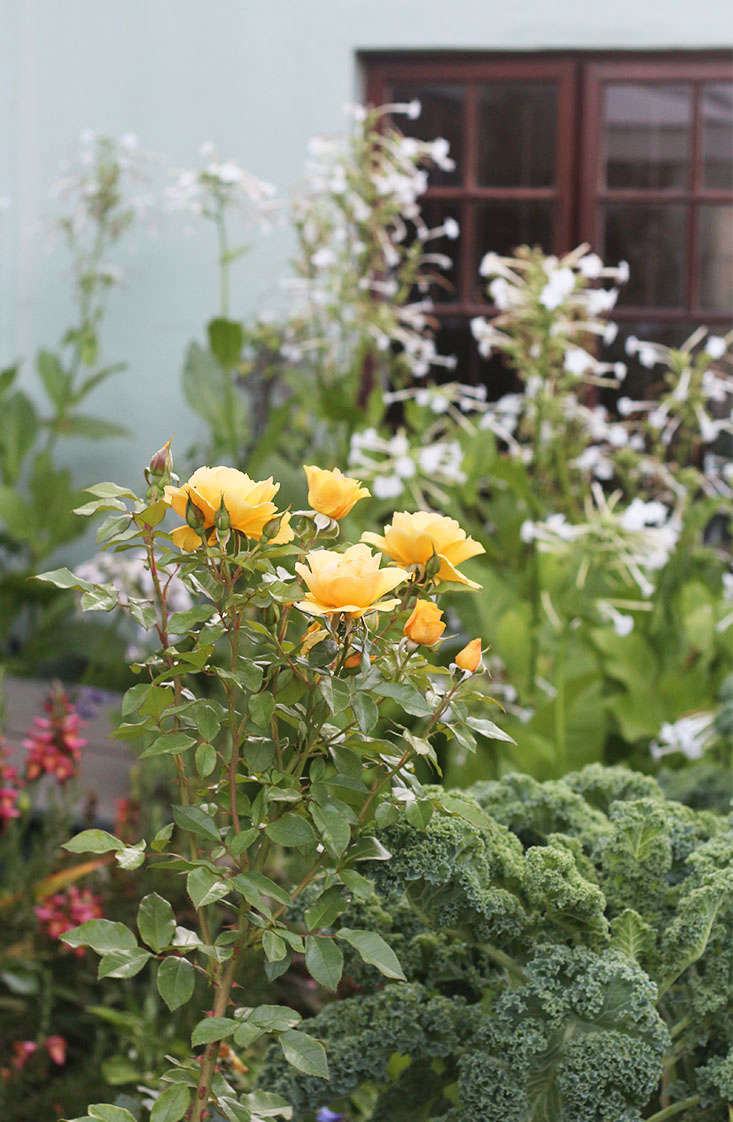 Above: ‘South Africa’ is my mother’s current favorite rose; it is planted in three spots and blooms prolifically. A dose of Epsom salts is used to condition the roses, and a frilly kale acts as an aphid trap. In the background, self-sown Nicotiana sylvestris is a scented wall of flowers in the evening. 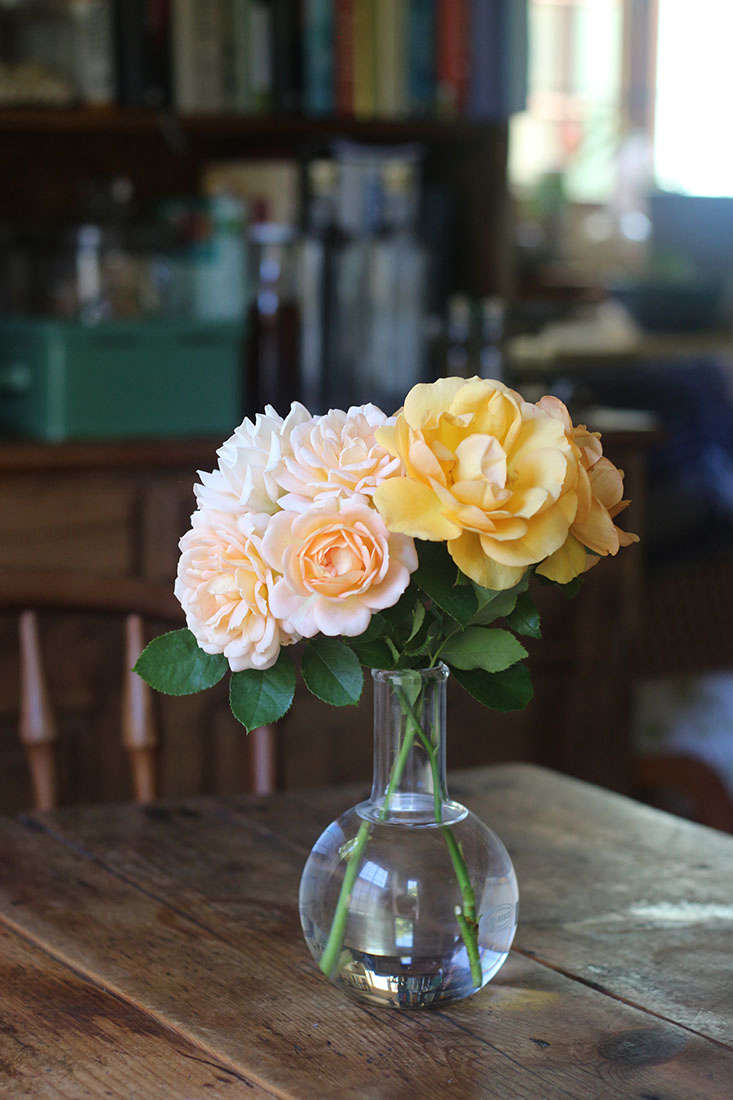 Above: ‘South Africa’ and ‘Amarula Profusion,’ also a South African-bred rose, share a vase on the kitchen table. 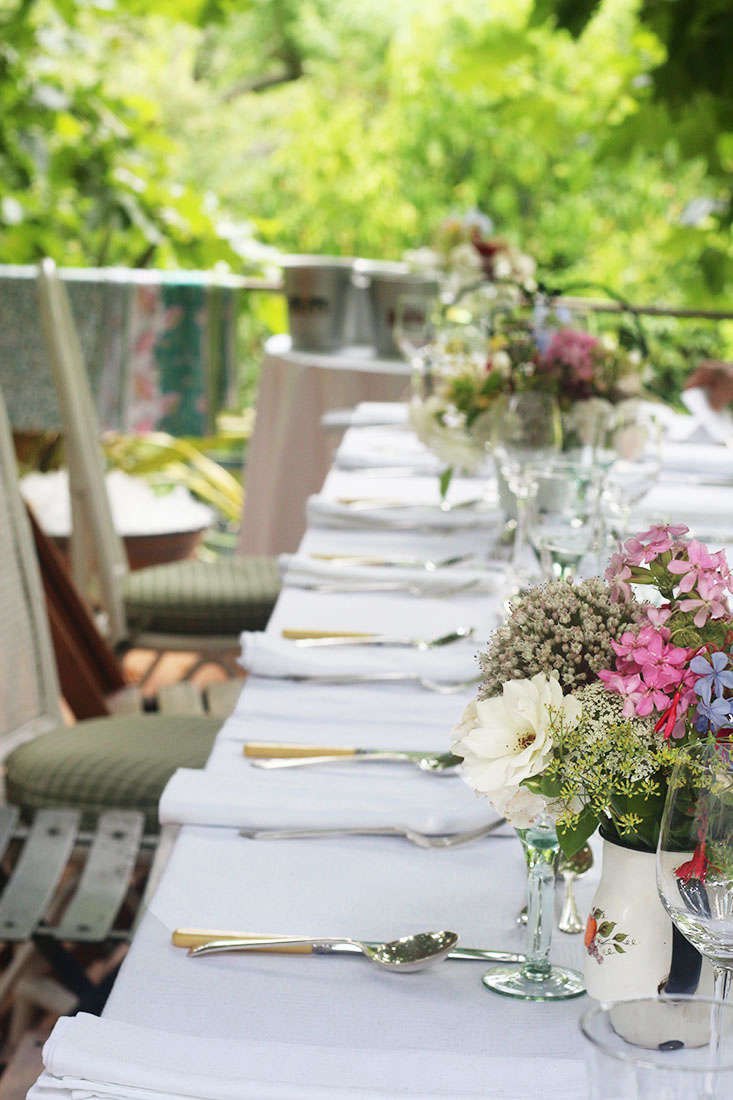 Above: Flowers from the garden grace the long lunch table where 20 friends gathered for a post New Year lunch under the tree. 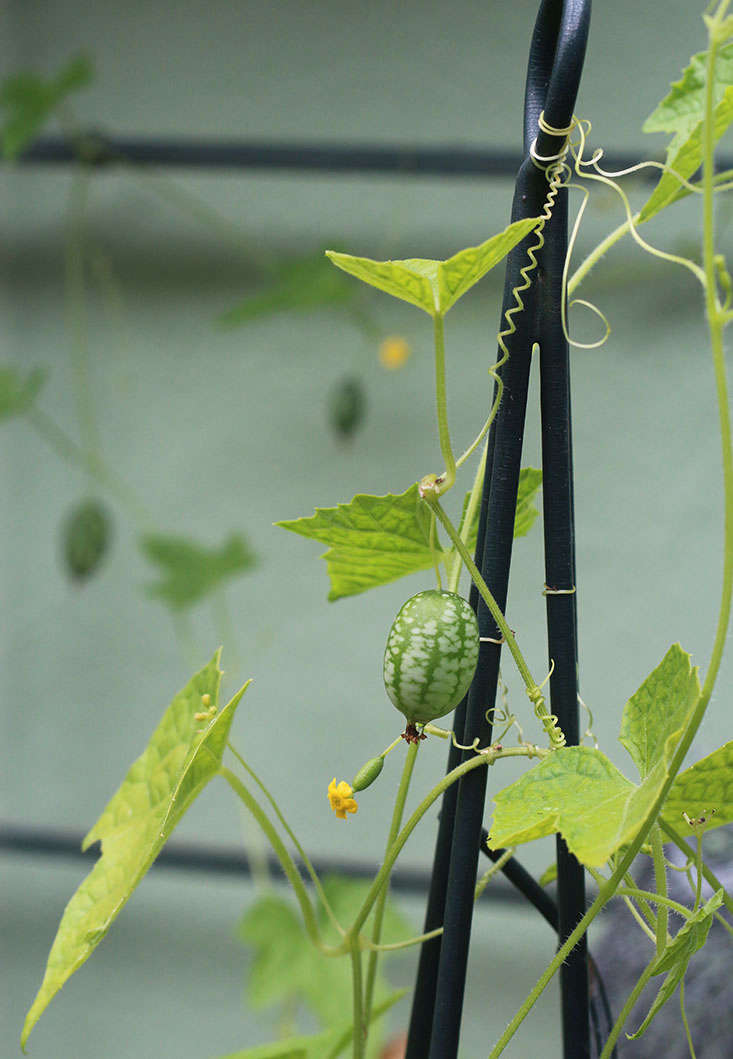 Above: Central American mouse melons (Melothria scrabra) are at home in a pot with a light tuteur to climb. The tiny melons taste like cucumber and become slightly sour as they mature.

A packet of Mouse Melon Heirloom Seeds is $2.69 from Botanical Interests. 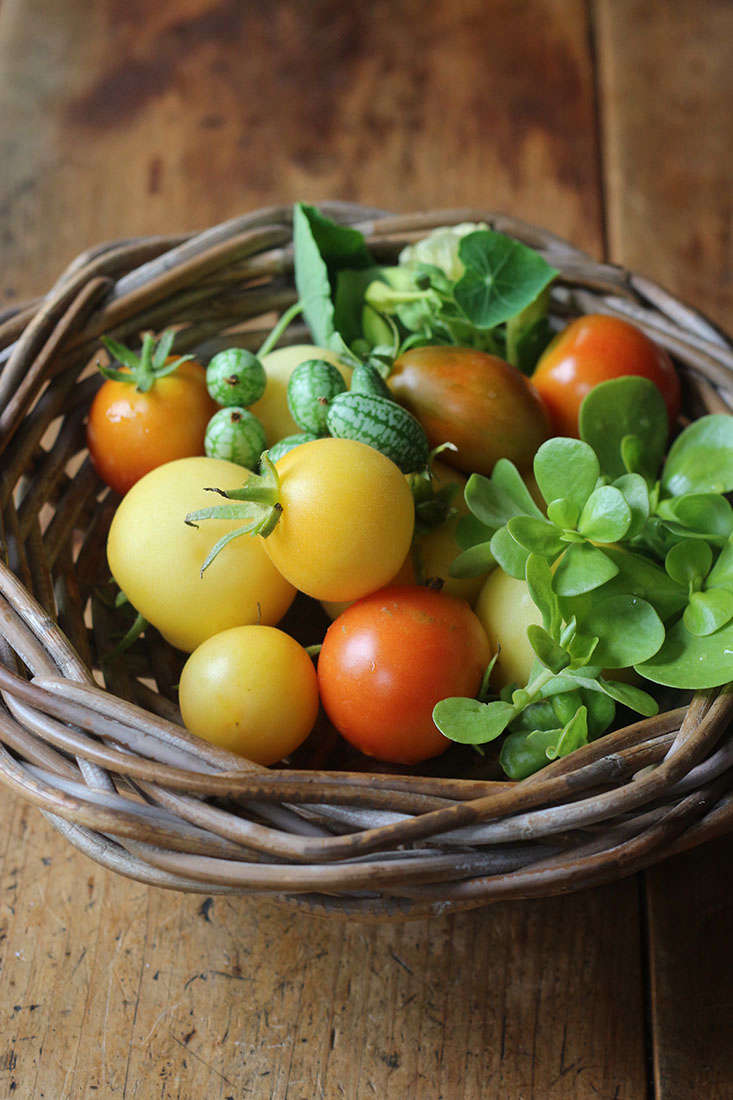 Above: A basket of salad ingredients from the garden includes the first of the summer tomatoes, mouse melons, peppery nasturtium buds and succulent golden purslane.

Golden Purslane seeds are $2.75 for a packet from Baker Creek heirloom seeds. 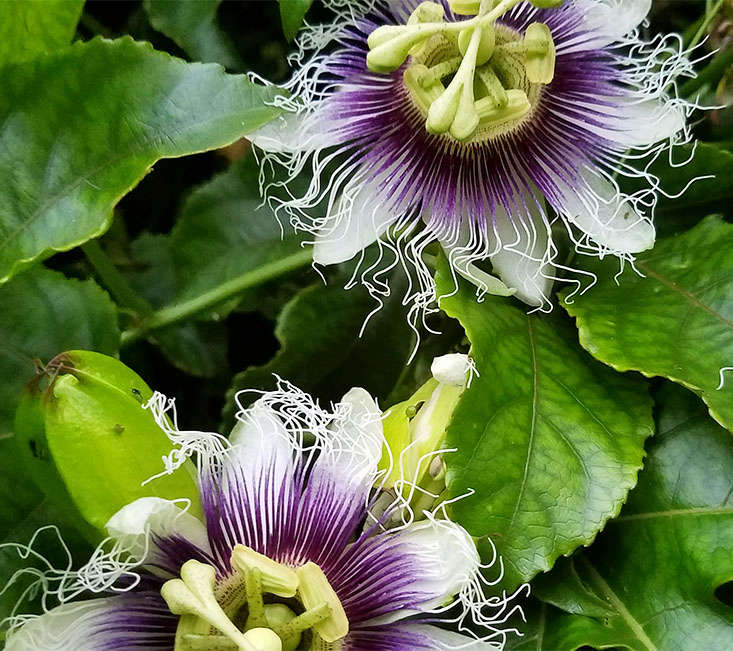 Above: Better known as grenadillas in South Africa, passion fruit flowers bloom on a north-facing wall, soaking up as much sun as possible in the Southern Hemisphere. 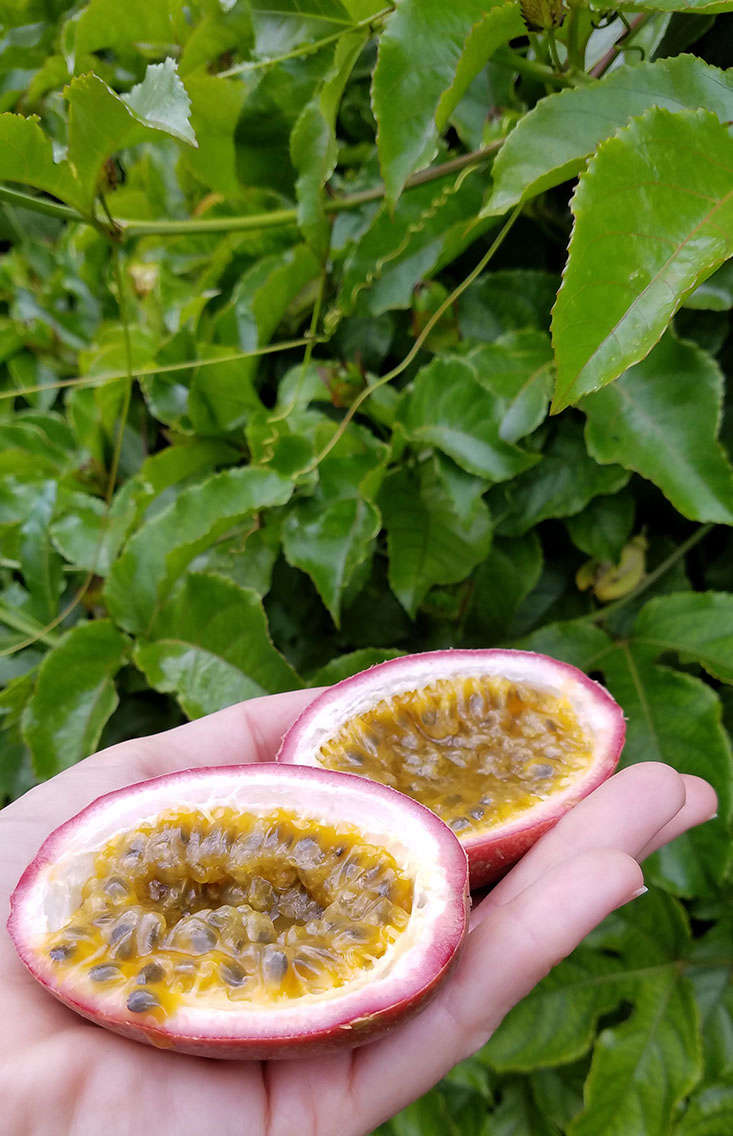 Above: The fruit ripens over many weeks in late summer, and is best eaten with a sprinkle of sugar, scooped out of its shell with a teaspoon. 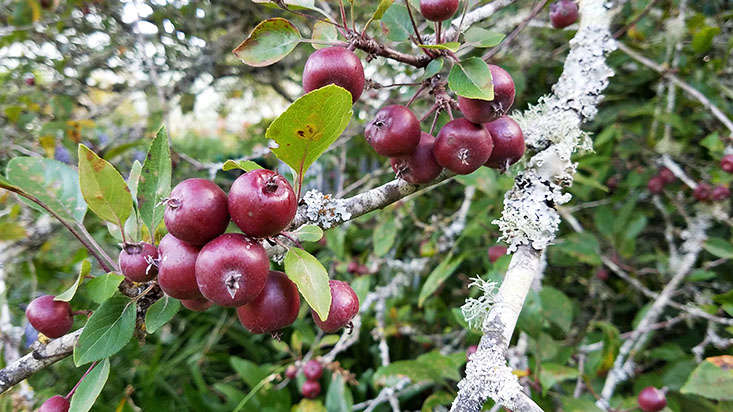 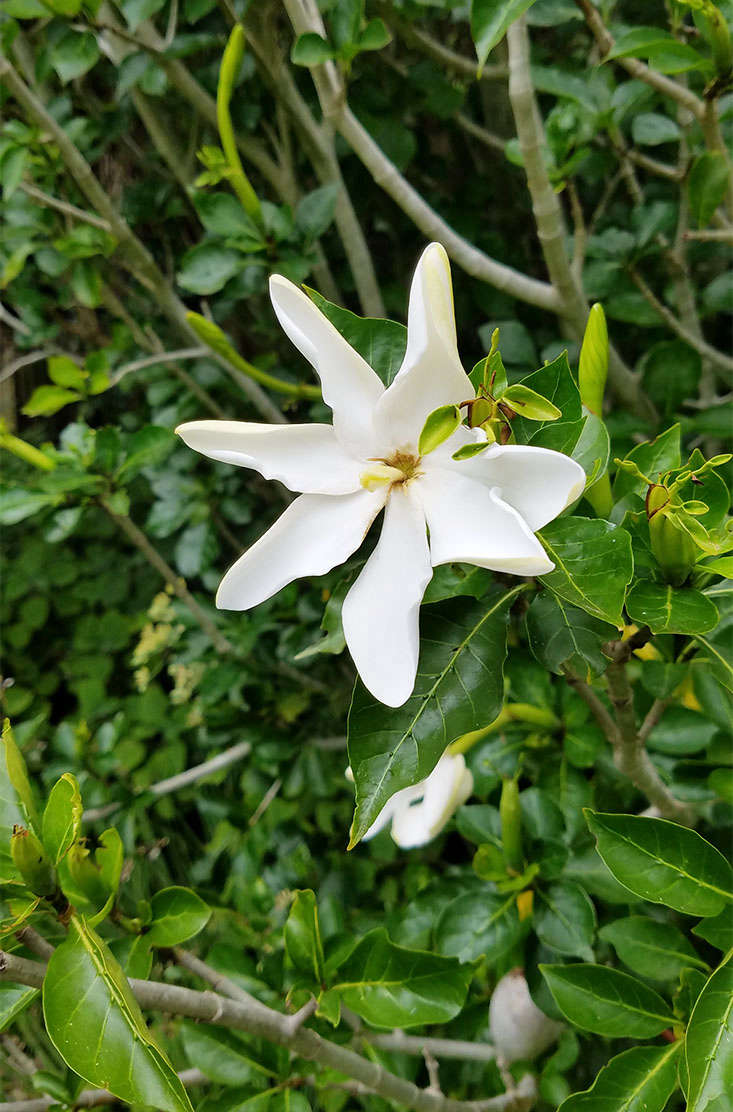 Above: At Christmas, instead of using cut fir trees (which in South Africa are sadly skinny and in no way resemble their svelte Northern counterparts) my mother decorates a potted indigenous tree, brought indoors for a few weeks. When these trees outgrow their containers they are retired to the garden and planted in-ground. Gardenia thunbergii—native to the eastern coast of South Africa—is a popular choice because its branches are perfect for attaching ornaments. Its summer bonus is a cloak of heavily scented flowers, each of which opens for a day. 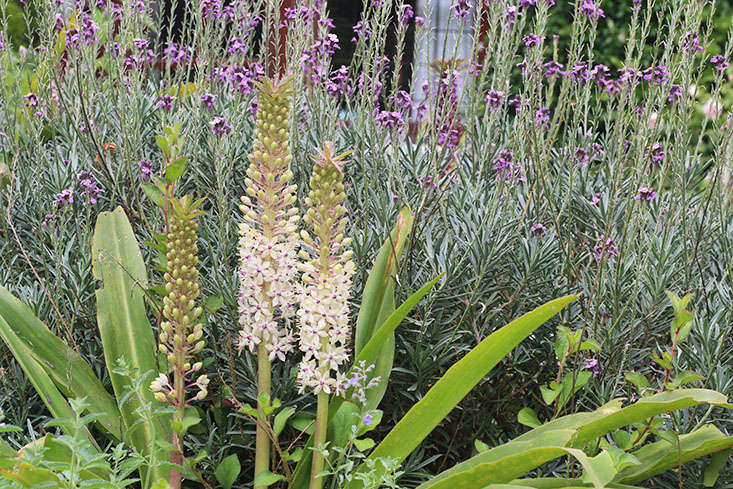 Above: Pineapple lilies (Eucomis species) also hail from the summer rainfall regions of southern Africa. In the Western Cape, which has a Mediterranean climate (winter rainfall), the plants require extra water. In a drought, with water restrictions imposed on gardeners using municipal water, my parents’ borehole, drawing upon the subterranean Table Mountain Group aquifer, has been a blessing and lifeline; gardeners without boreholes may only use gray water. 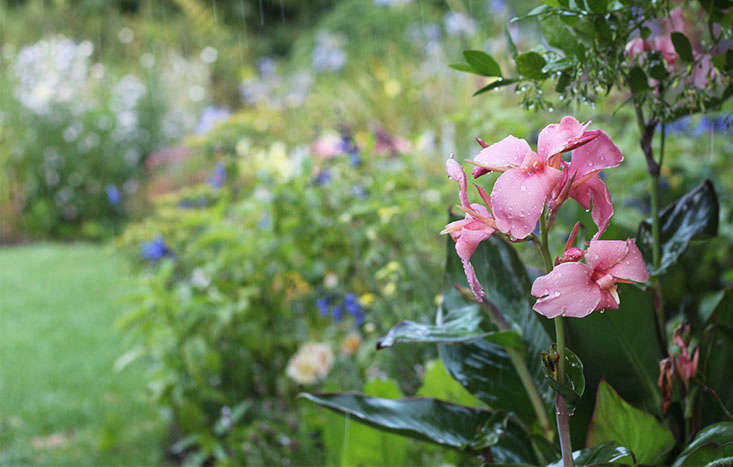 Above: After a teasing rainfall, pink cannas soak up the moisture. 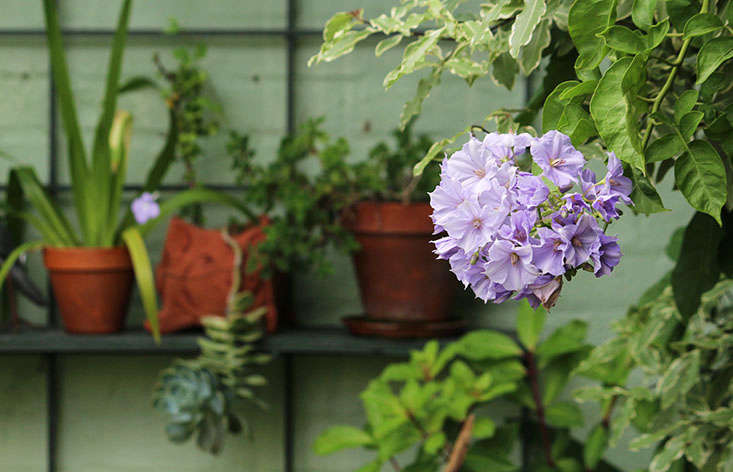 Above: In a corner where my mother has created a potted patio garden a giant potato creeper (Solanum wenlandii) climbs an arbor. 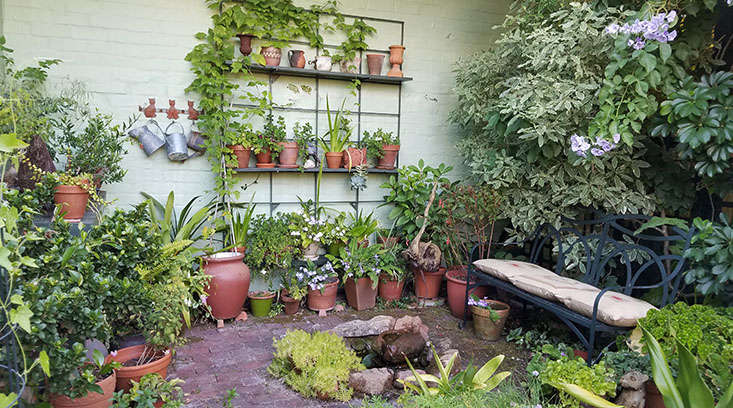 Above: Plant shelves provide support for a collection of Streptocarpus, while a bench in front of the tiny pond (the favorite drinking spot for pretty swee waxbills) is a cool refuge on hot summer days.

My mother is introducing more local plants to her garden palette, both to reduce the water used as well as the amount of work required to take care of the large space. But she is a plant collector at heart, and I know that unusual discoveries and tempting finds will make their way home with her. They will be happy, there.