When Remodelista’s Justine Hand and her husband, Chad, bought a wonky 1807 house on Rock Harbor, she already knew every cobwebby nook: With their two young kids, they’d rented the place for several summers (and her grandparents’ house is right across the street). Ownership meant that Justine, armed with little more than paint and fistfuls of greenery, could finally create the “not too cottage-y cottage” she envisioned.

We featured the Salt Timber Cottage, as it’s known, in chapter one of the Remodelista book. But we could only start to show its many corners. Today we’re touring the family side of Justine’s DIY remodel.

Photographs by Matthew Williams for Remodelista. 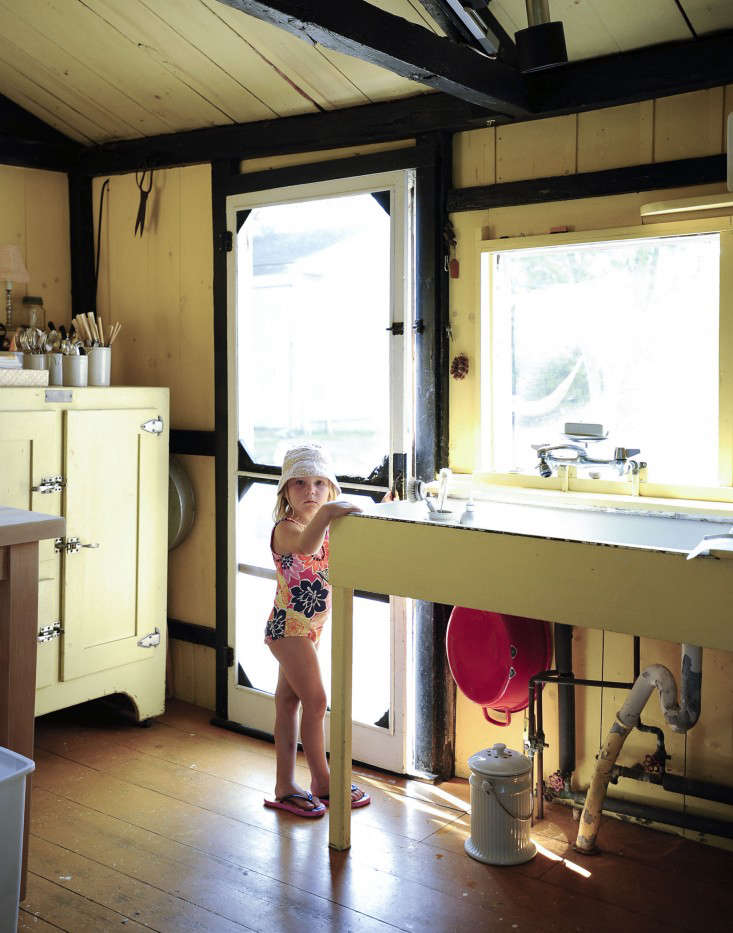 Above: The yellow kitchen was the one room Justine left much as is–she simply touched up the paint and accessorized well. Justine and Chad’s daughter, Solvi, is shown here. Note the black band on the screen door for masking fingerprints, an old idea worth replicating. 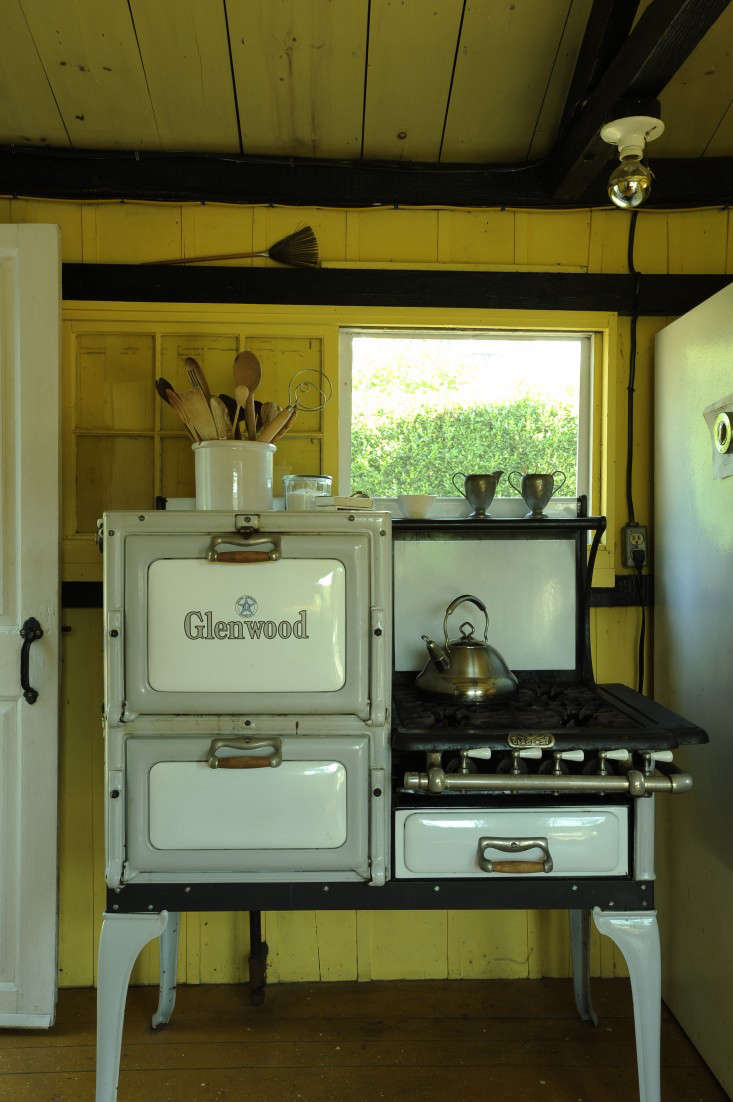 Above: The vintage stove, painstakingly refurbished by the previous owner, works, though Justine finds it finicky: “I’m happy with the way it looks, if not the way it cooks.” 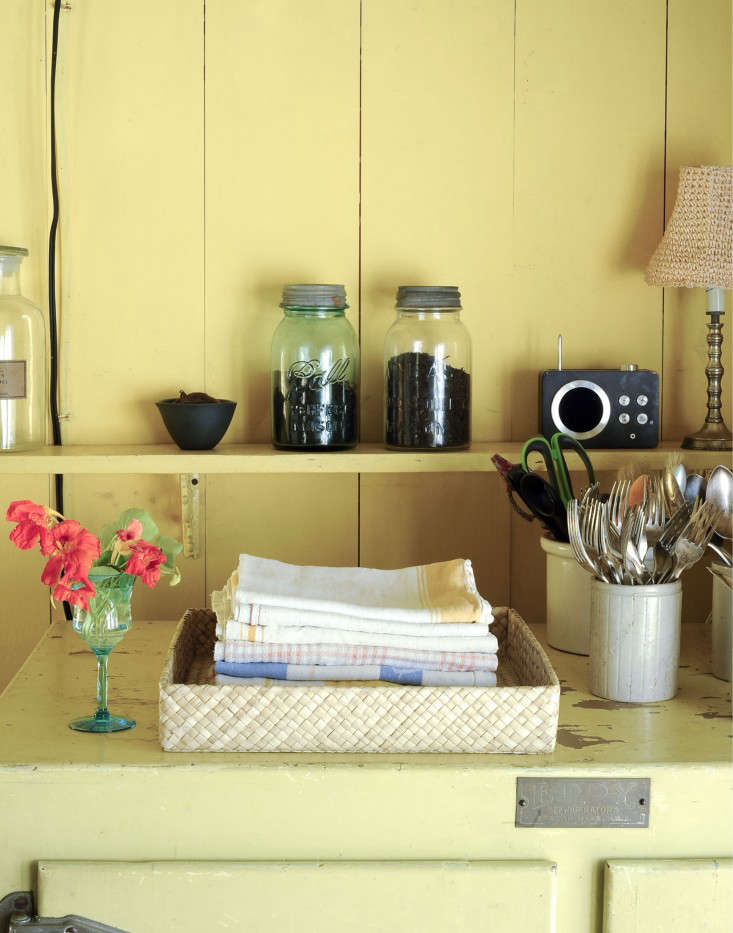 Above: On arrival at the house, Justine grabs clippers and heads out to gather flowers and leafy stems. “I keep getting more and more minimal with our furnishings and instead decorate with flowers. Every room has a floral accent–not a bouquet, just some sort of life.” These nasturtiums are in a cordial glass on top of an icebox (now used for storage). Coin silver, restaurant ware, and other cutlery is stowed in stoneware jars. For polishing silver, Justine swears by the ease of Connoisseurs Silver Wipes, but appreciates a slight patina. 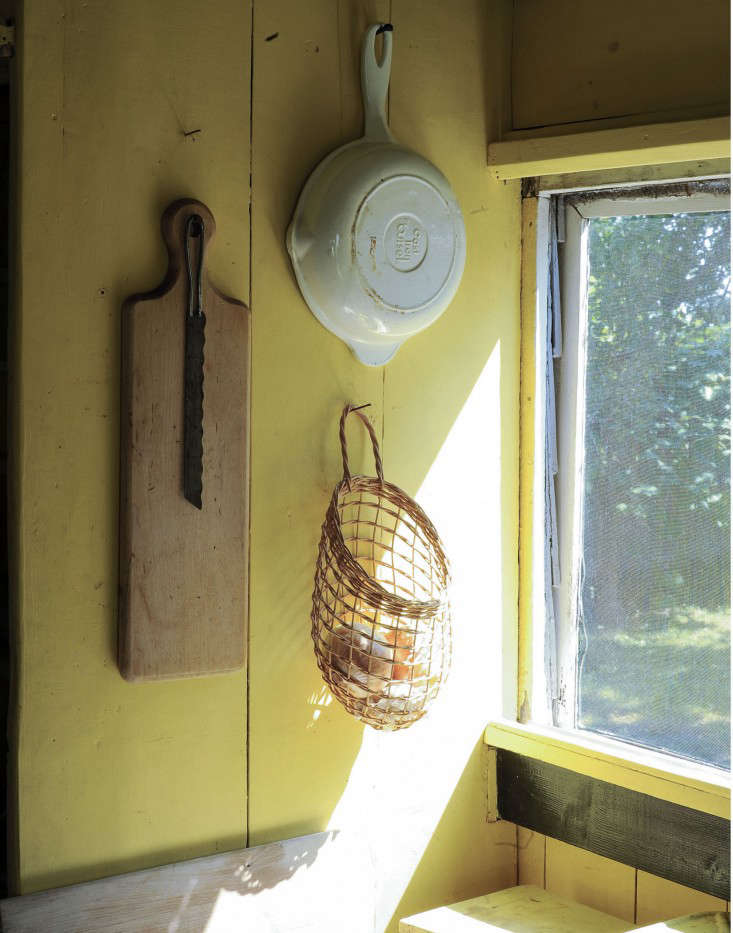 Above: On a side wall, a favorite pan, cutting board and bread knife, and onion basket hang from nails. To source a similar basket, see our recent 10 Easy Pieces. 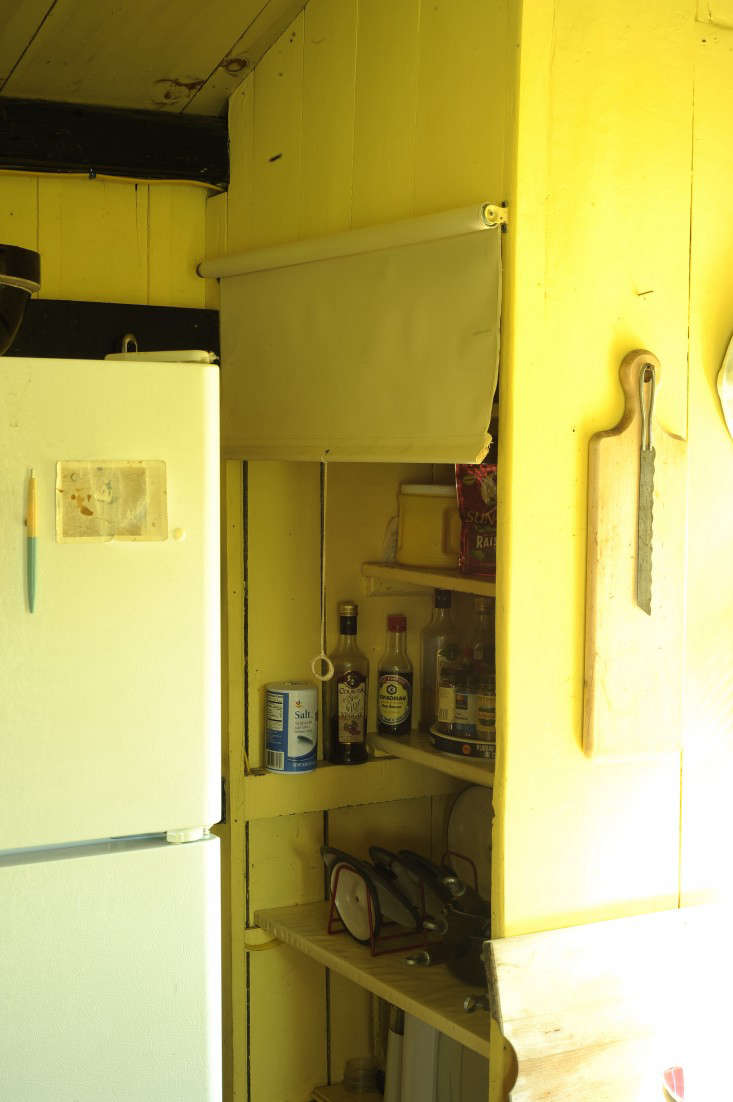 Above: An old roller shade serves as a cover for pantry shelves. 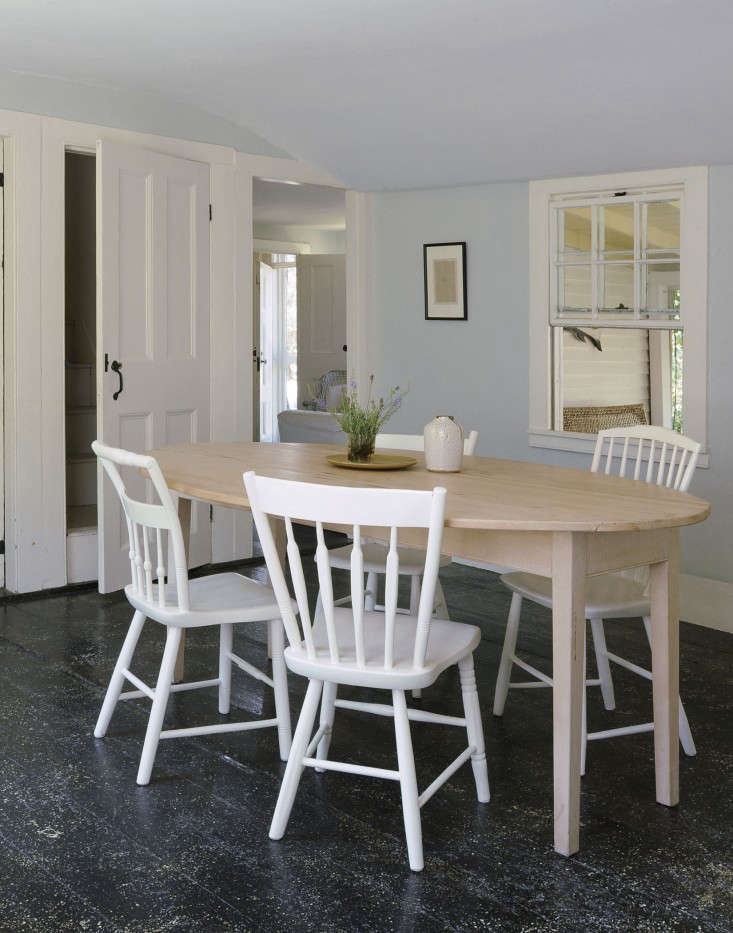 Above: The dining room is in the center of the cottage–and has seven doors leading off it. Justine had the table custom built for $700: “Since the space is small, I wanted it to be drop leaf, so it could be very narrow. It’s made from old wide-plank barn boards, and each leaf is one board. I love the old-fashioned detailing on the hinge.” The mismatched chairs are unified by several coats of Benjamin Moore Linen White paint. 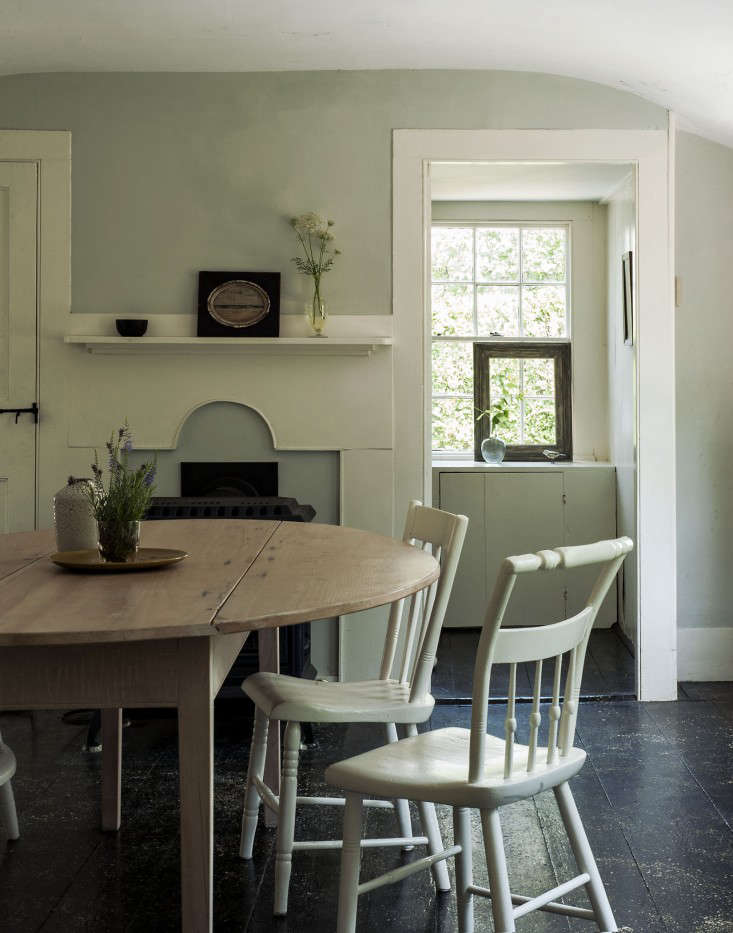 Above: One of the cottage’s most winning features is its original spatter-painted floors. “They’re a wonderful way to add texture and interest while still keeping the overall look minimal and clean–and not having to constantly sweep sand,” Justine notes. Re-creating the look is surprisingly easy (and an economical alternative to refinishing wood floors): Read Justine’s DIY: New England Spatter-Painted Floors. 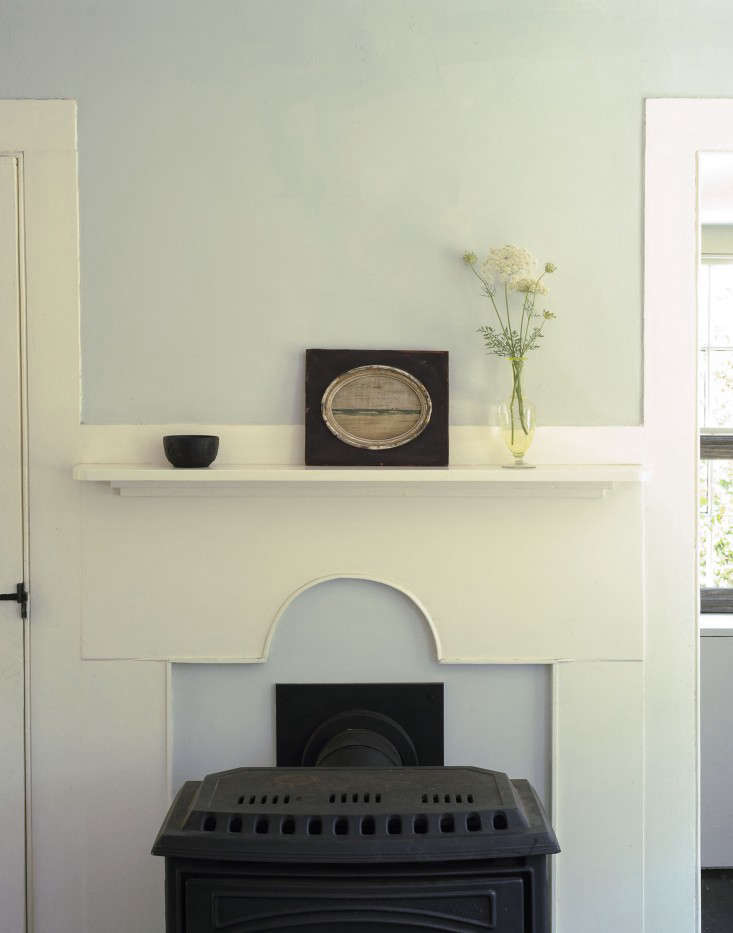 Above: The room is painted in Tidewater, a pale blue from Martin Senour Paints, that Justine says “makes the space feel like you’re inside a robin’s egg.” Over the gas stove, the mantel displays “a flea market painting subtly suggestive of the sea” and wild Queen Anne’s lace in a Vaseline glass vase that was a wedding present to Justine’s parents. 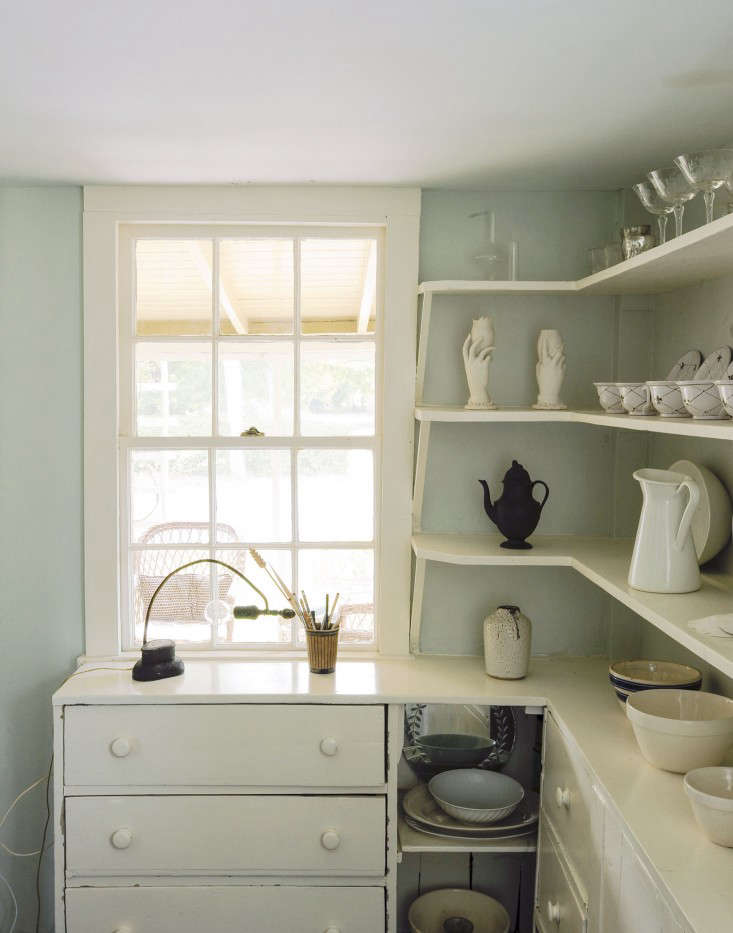 Above: A pantry off the dining room displays a well-edited selection of tableware. The bisque hand-shaped vases and black Wedgwood coffee pot came from Justine’s grandmother’s packed china cabinet. 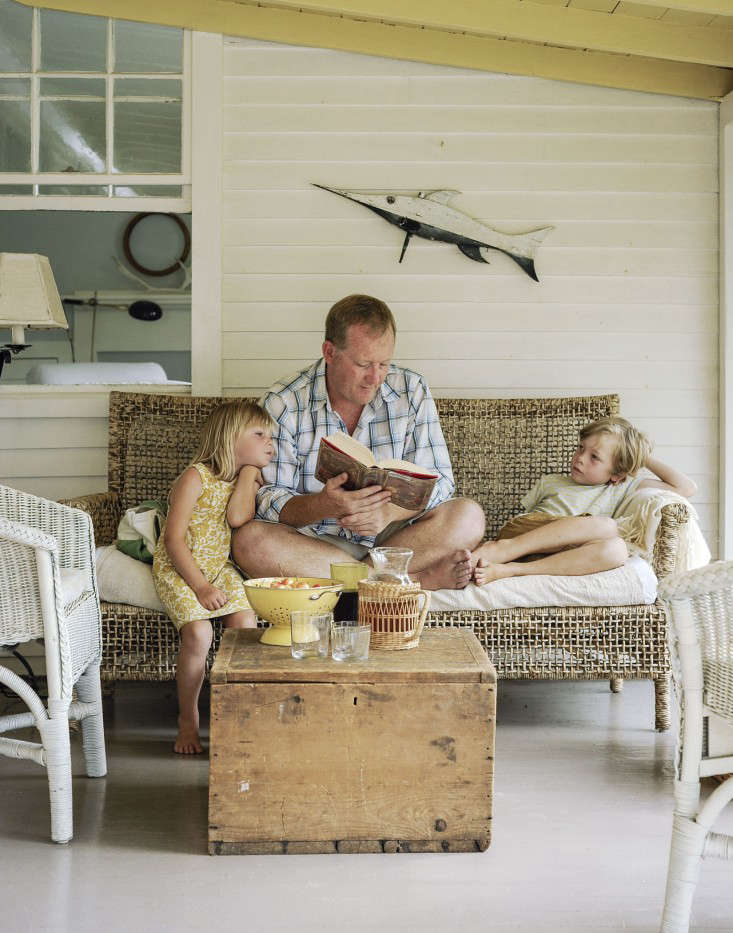 Above: The favorite hangout, the screened-in porch, is where books are read (shown here, Chad with Solvi and Oliver), lemonade is poured, and bathing suits hang to dry. The walls are Benjamin Moore Linen White offset by Benjamin Moore Stonington Gray on the floor–a classic Scandi combination that Justine used in several rooms to inject lightness into the gloom. The wooden fish came from a weathervane on the garage.

Above: The porch has its original wicker chairs. Note the ceiling, painted a yellow inspired by the kitchen. 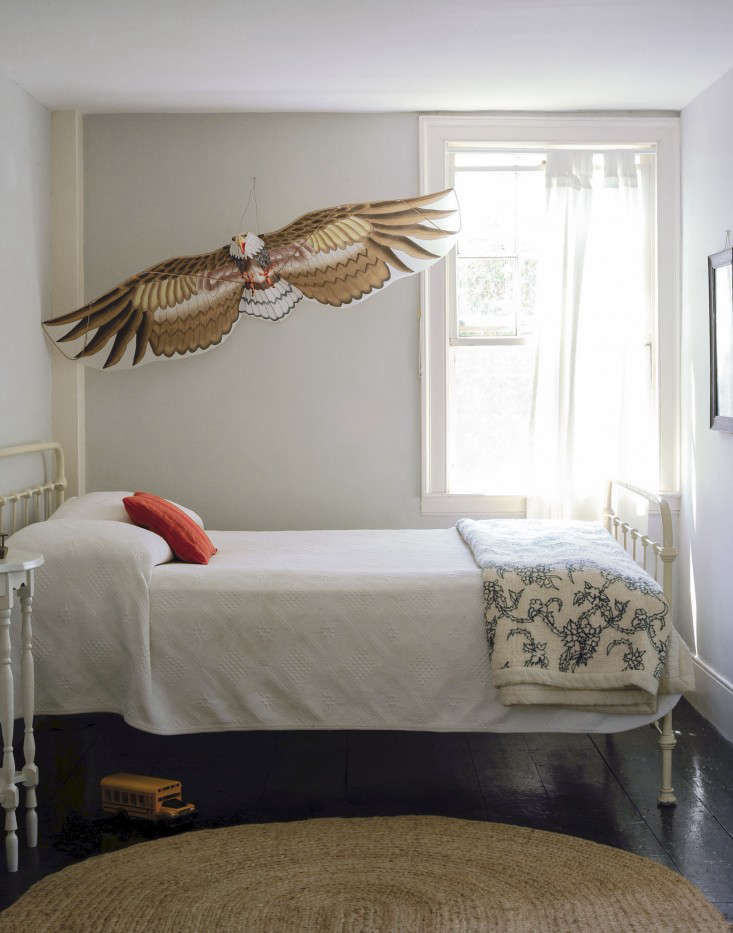 Above: In Oliver’s room, the eagle kite is a gift from his great aunt Sheila’s trip to China. 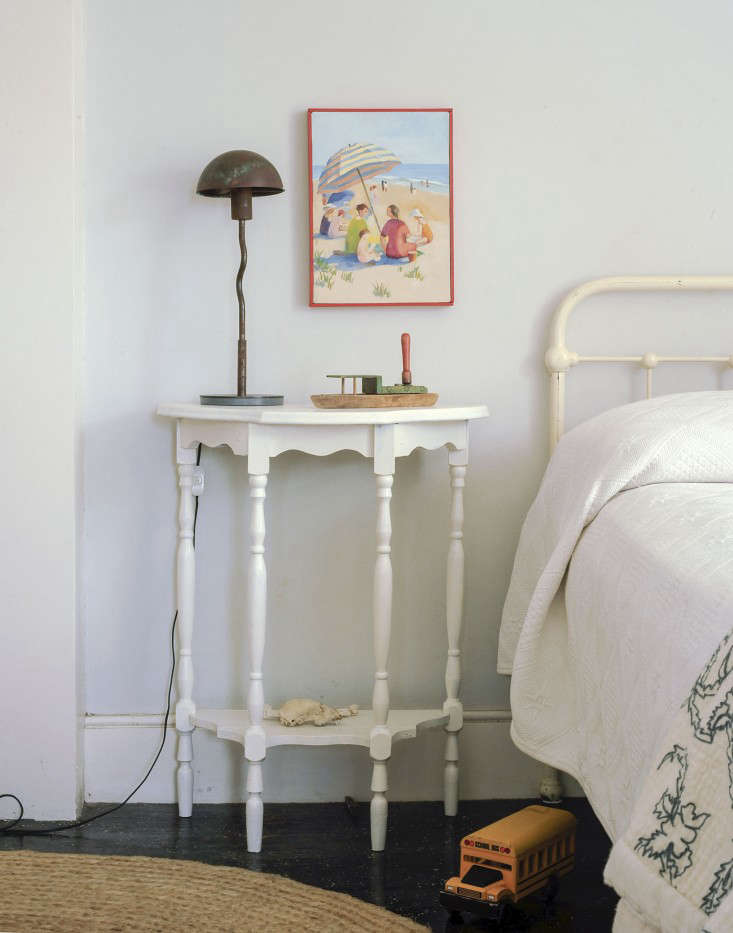 Above: Oliver’s bedside table is a $15 flea market find. The seaside painting and lamp are placeholders borrowed from a family friend. 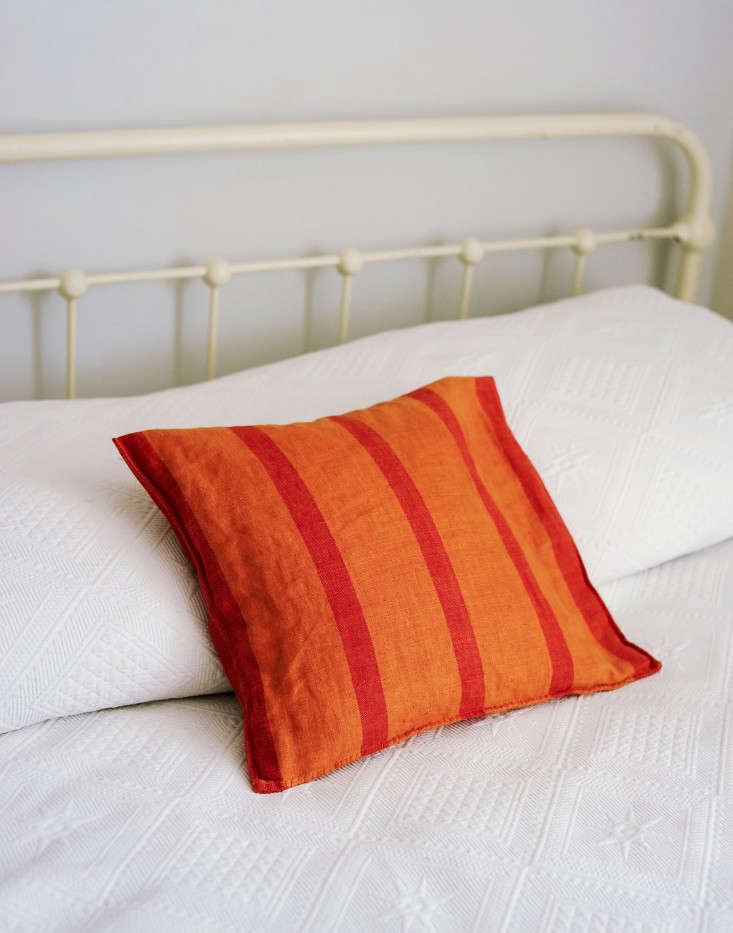 Above: “It’s so hard to find good orange pillows,” says Justine. A friend stitched this one from an old French linen tea towel. 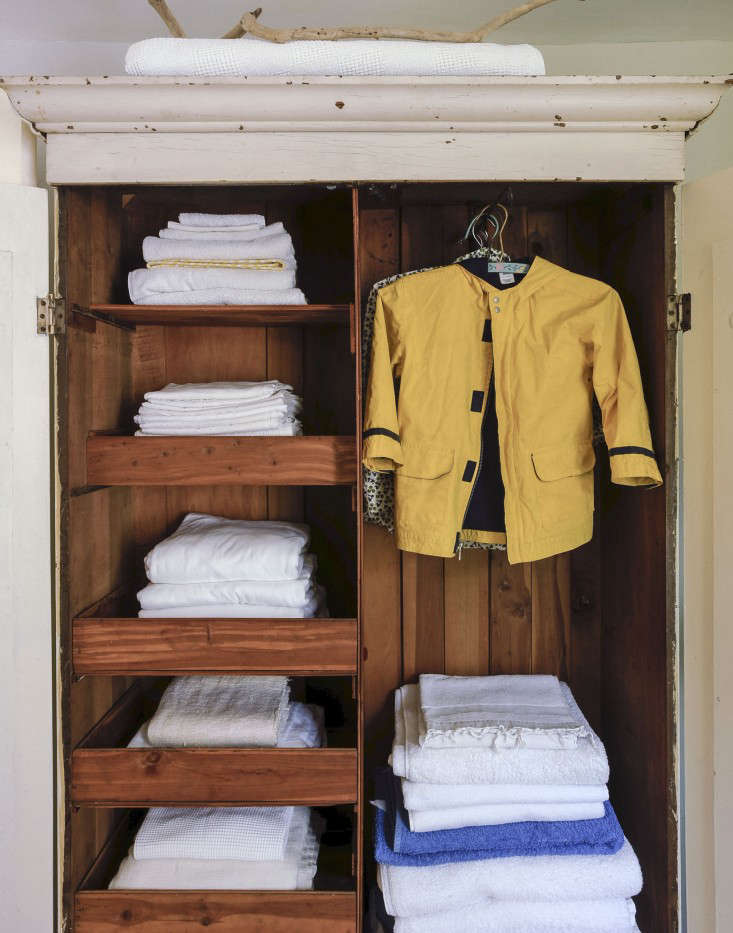 Above: Because the house almost entirely lacked closets, Justine bought a cedar-lined cupboard from a local antiques shop. It holds the family’s towels and linens, but very little else: “Lack of storage space forces you–in a good way–to think about every single thing that you allow in.” 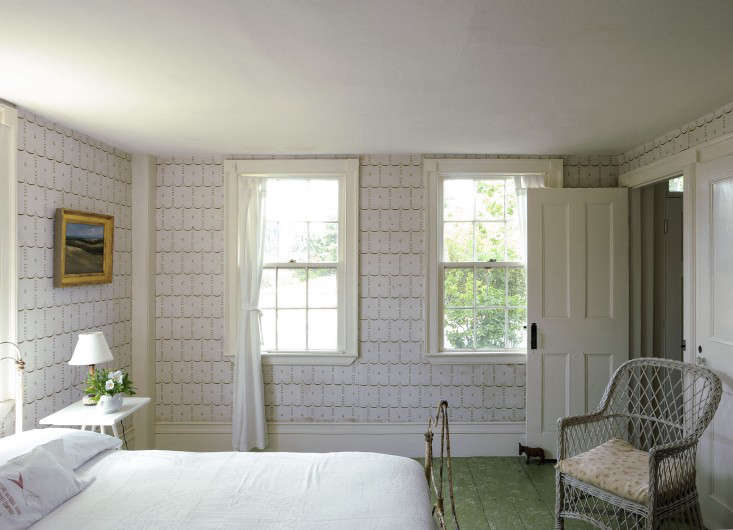 Above: The first-floor guest room has a green spatter-painted floor and old wallpaper that seems to improve with age (in several other rooms, Justine had a professional strip the wallpaper, “a bear of a job” that she says was her biggest remodeling expense). The iron bed frame was purchased on eBay and the simple tab curtains are from Ikea. 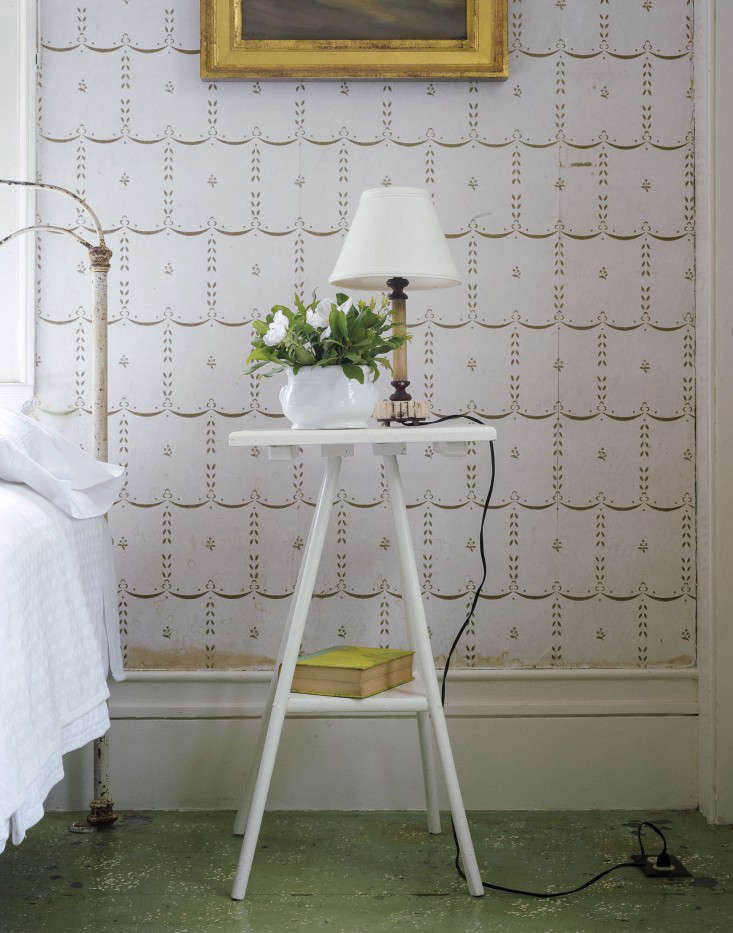 Above: Wild Rosa rugosa and lilac leaves, or bay leaves, are Justine’s favorite bedside combinations: “Rosa rugosa smell divine, and I always like to have a bright green that jumps out. This house is so relentlessly cottage-y, but the right acid green tempers that.” 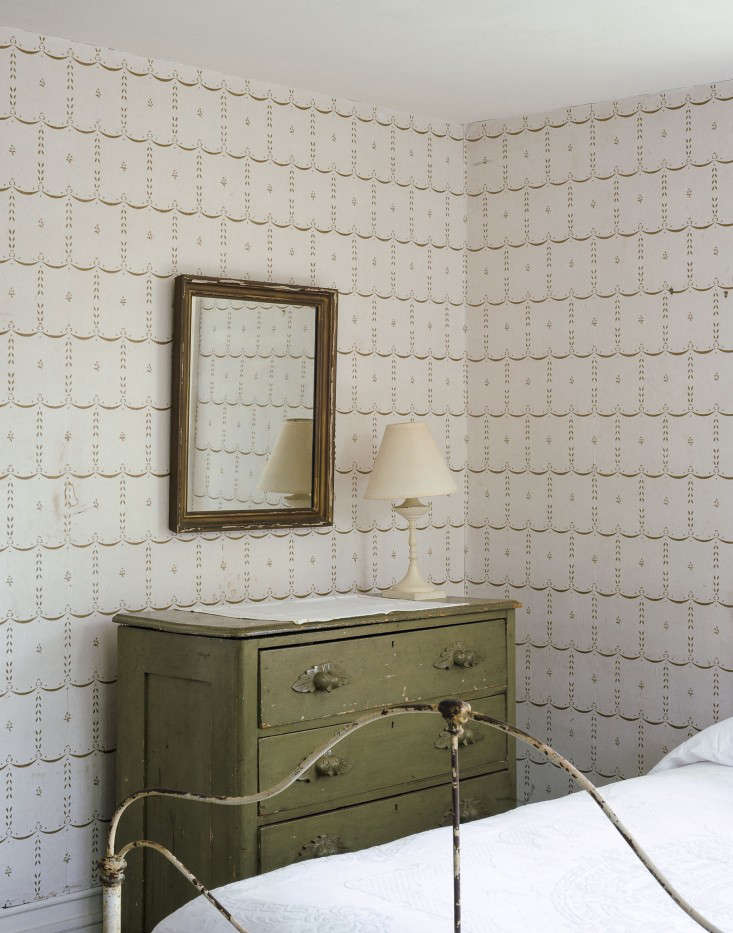 Above: The chest is a $50 Cape Cod antiques store piece. Solstice Home, the source of the candlestick light, and one of Justine’s favorite local vintage dealers, has since moved to Portland, Oregon; it’s now part of the Maven Collective (and also operates as Solstice Home on Etsy). 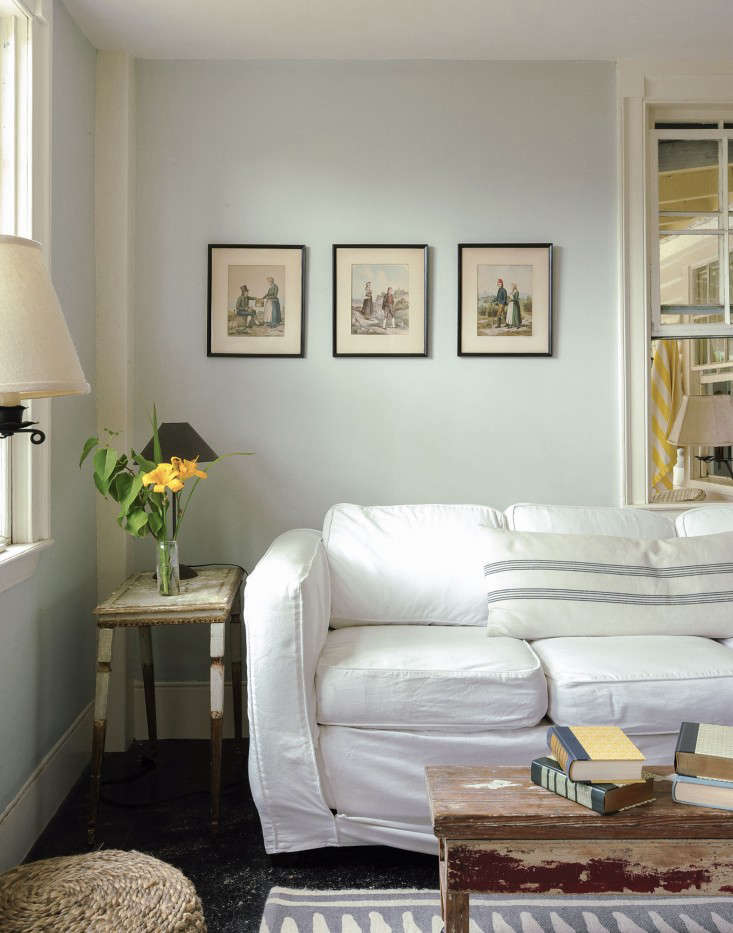 Above: Robin’s egg blue carries over from the dining room into the pocket-size living room, where Norwegian peasant prints from Justine’s grandmother hang over an old Pottery Barn sofa. The coffee table is a workbench that happened to fit. The flower arrangement–lilies and lilac leaves–are in an old glass baby bottle. 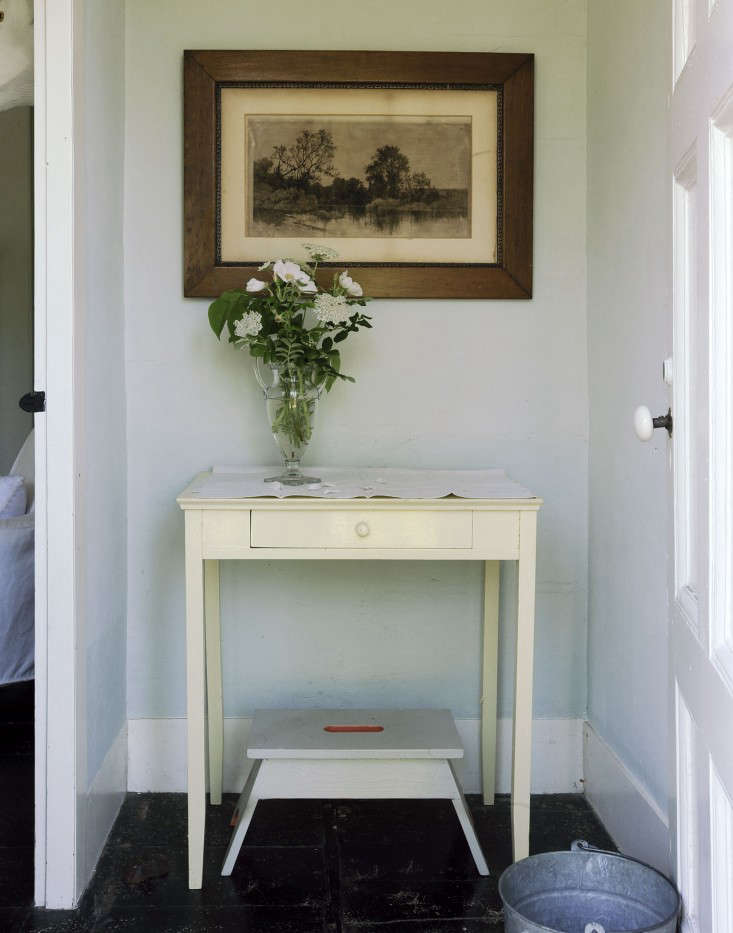 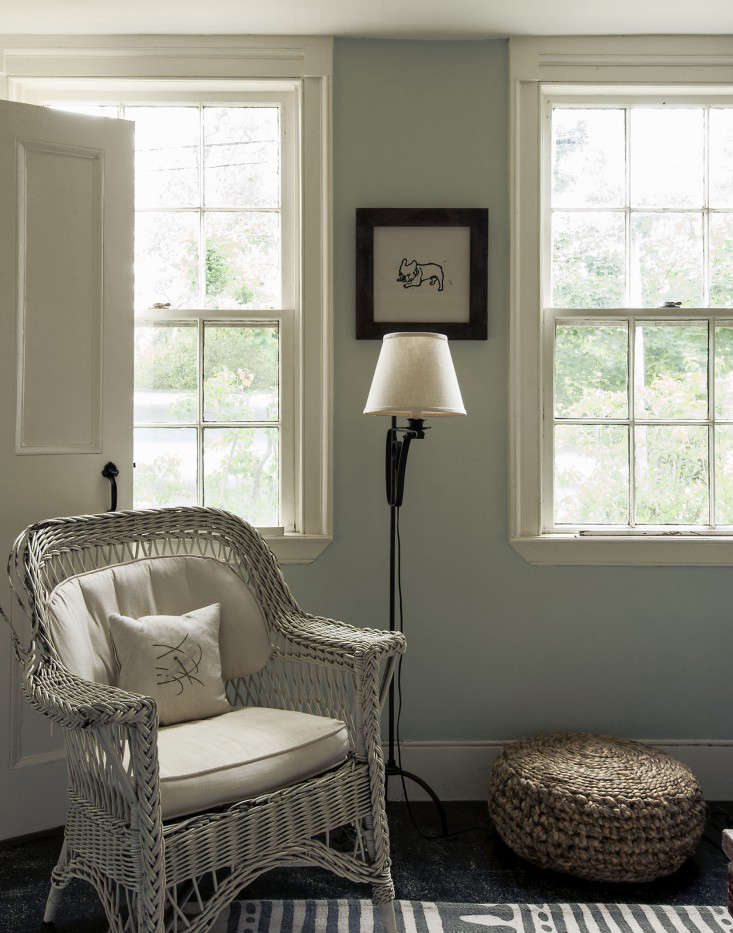 Above: To draw in the famous Cape light, the public rooms are curtain- and shade-free. Like a bride, Justine likes to mix, old, new, borrowed, and blue. Here, under a light on “permanent loan” from a friend, an antique wicker chair sits aside an ottoman purchased long ago from Pottery Barn. The throw rug, from West Elm, replaced a seagrass rug deemed “too quaint”–part of Justine’s job, as she sees it, is keeping her house’s undeniable charms in check. The linocut print, Mark’s Dog, is by Hugo Guinness from John Derian, in Provincetown. 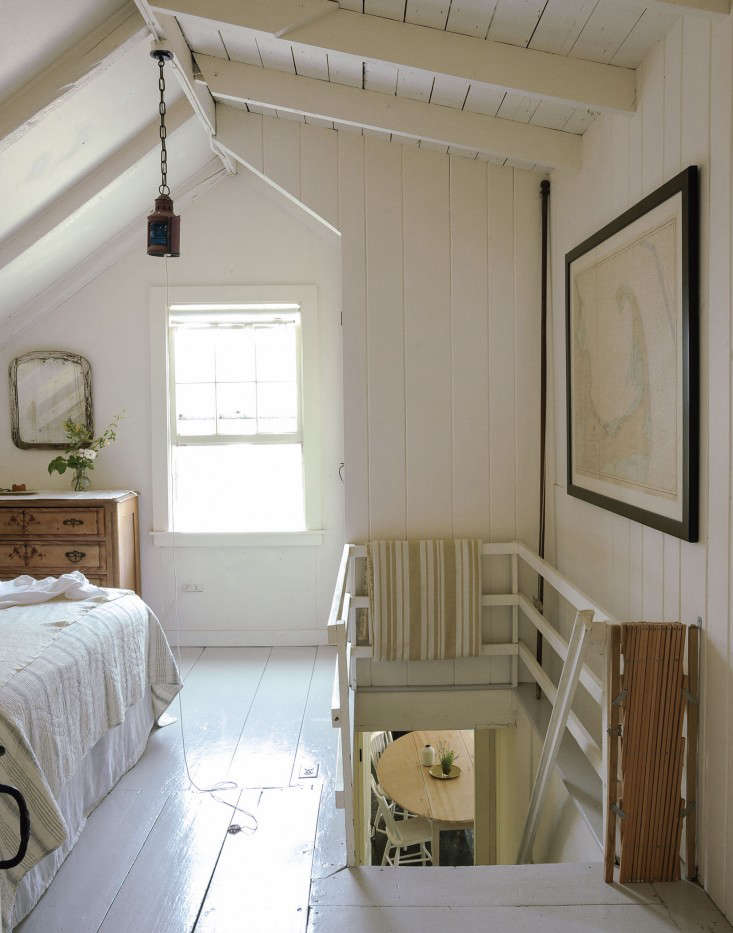 Above: Stairs off the dining room lead to the master bedroom tucked under the eaves. 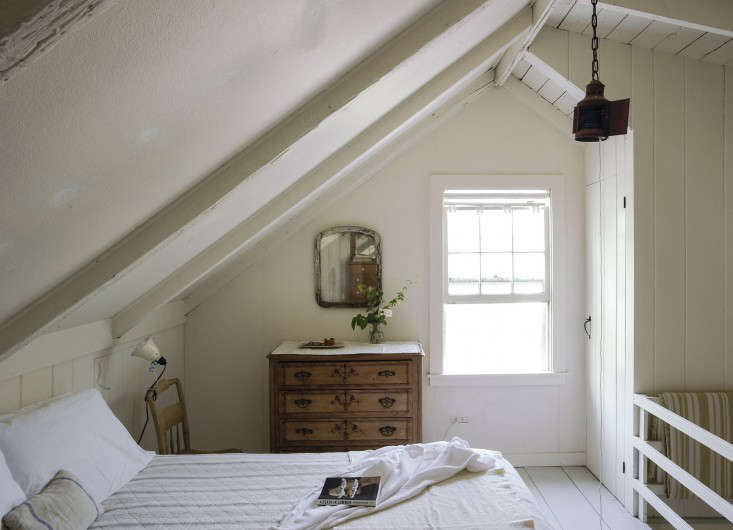 Above: The room is just big enough for a double bed. The hanging light came with the cottage and is a ship’s lantern, one side red, the other blue. 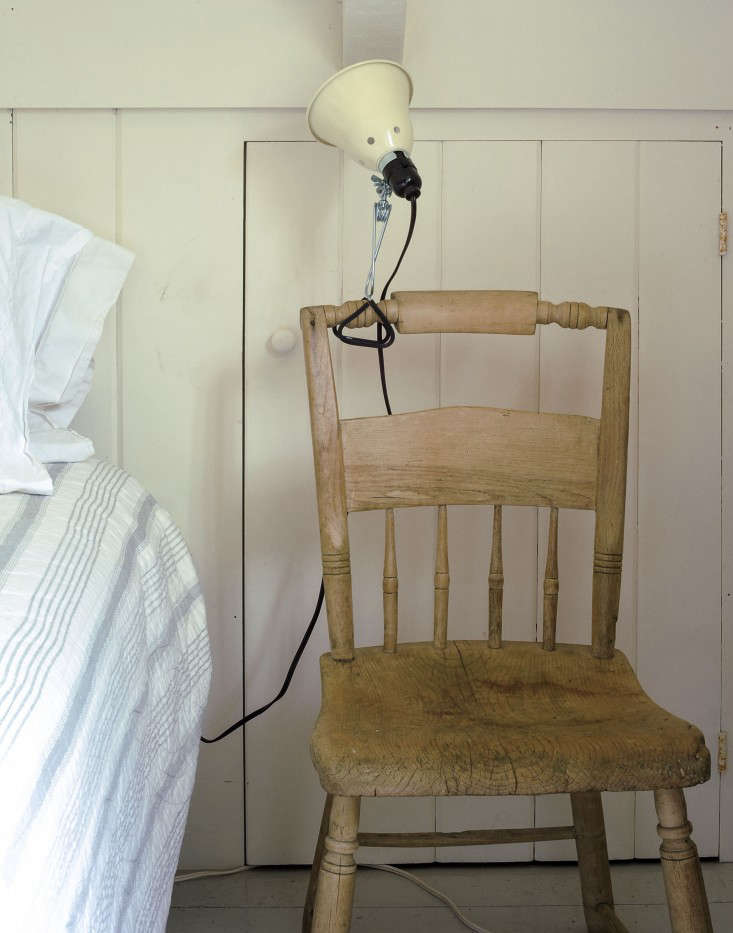 Above: A $15 whitewashed chair serves as a bedside table–”someone sawed off the legs, so it’s unusually low.” The light, Justine says, is “just a hardware store clip-on that I spray-painted white.” 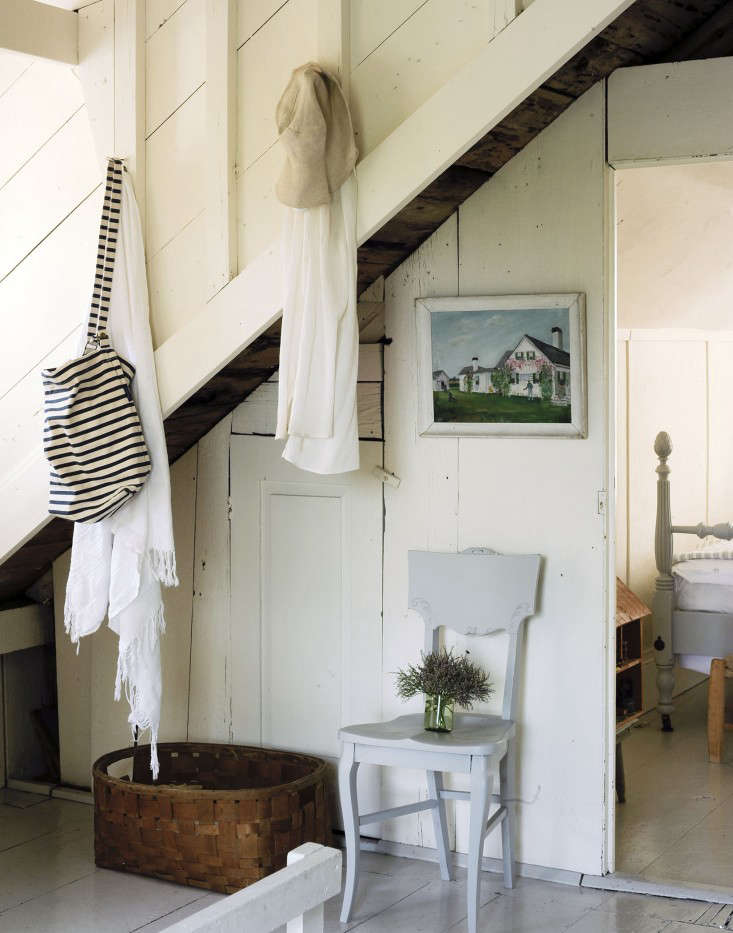 Above: On the second-floor landing, the painting of a house is by a woman who lived in the cottage in the 1950s. It’s a portrait of Justine’s grandparents’ place, and the children out front are Justine’s mother and aunts. 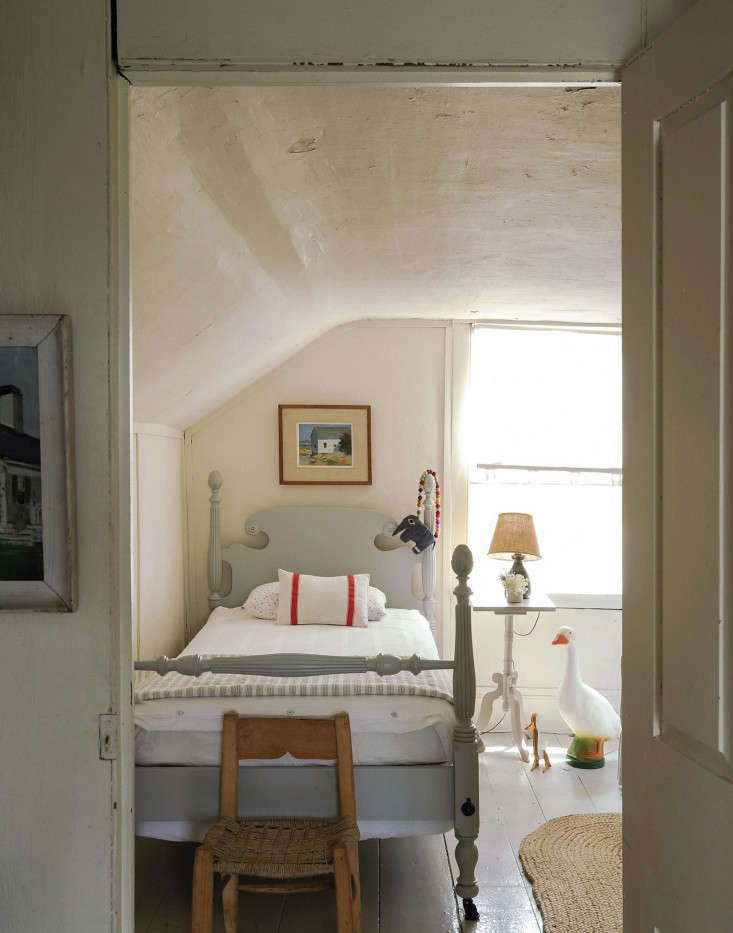 Above: Solvi’s room under the eaves has gray floors and a newly painted bed to match–it had been a dark wood that Justine says took courage to cover (but she’s glad she did). 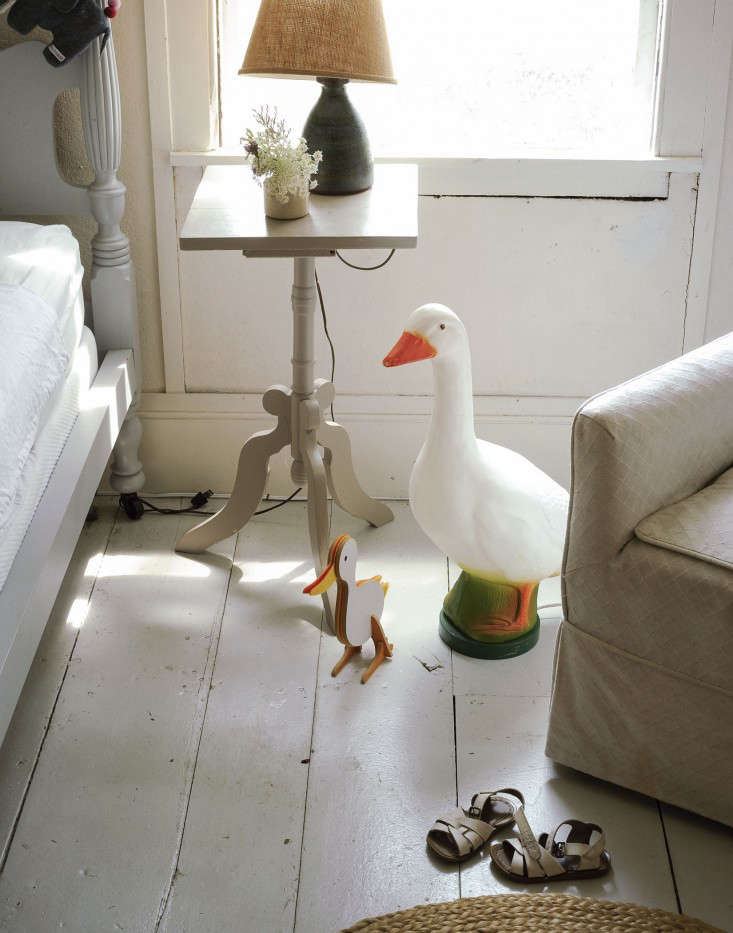 Above: A crucial bit of color is supplied by an orange-striped pillow and a 1970s Gladys the Goose lamp. 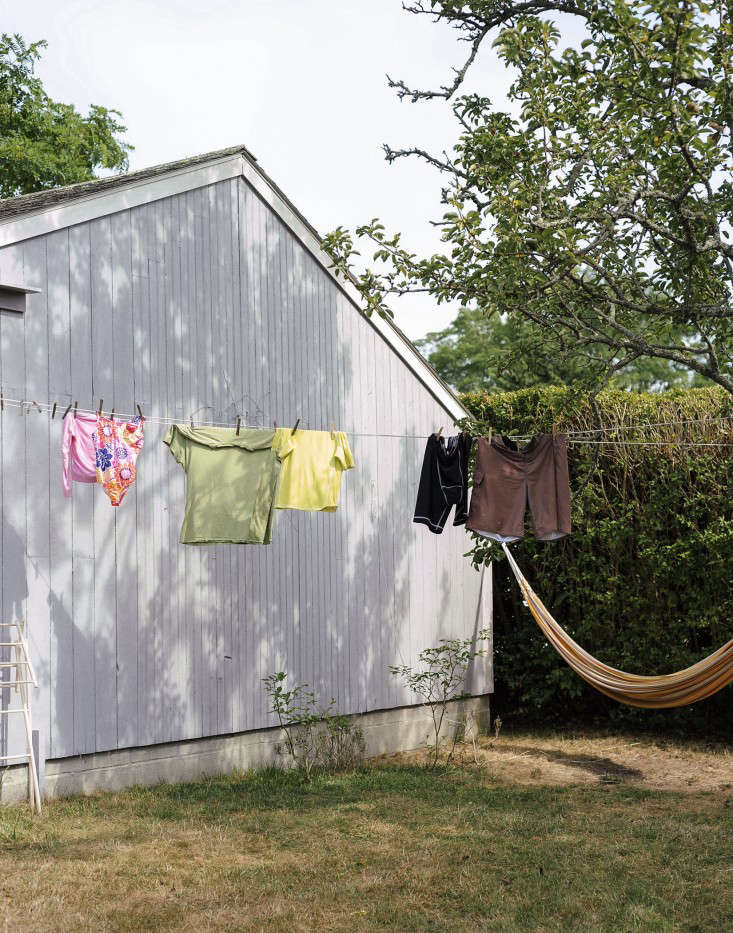 Above: A backyard laundry line and hammock hang by the garage. 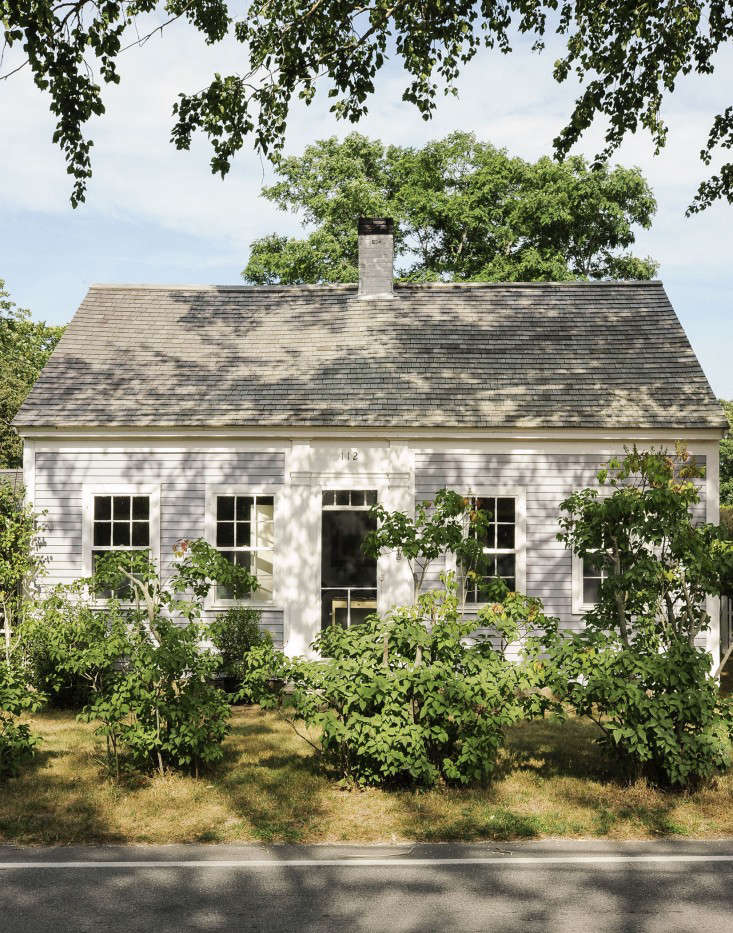 Above: The cottage dates to 1807 and was owned for many years by two sisters from Boston who had given it its last major remodel in the 1940s. 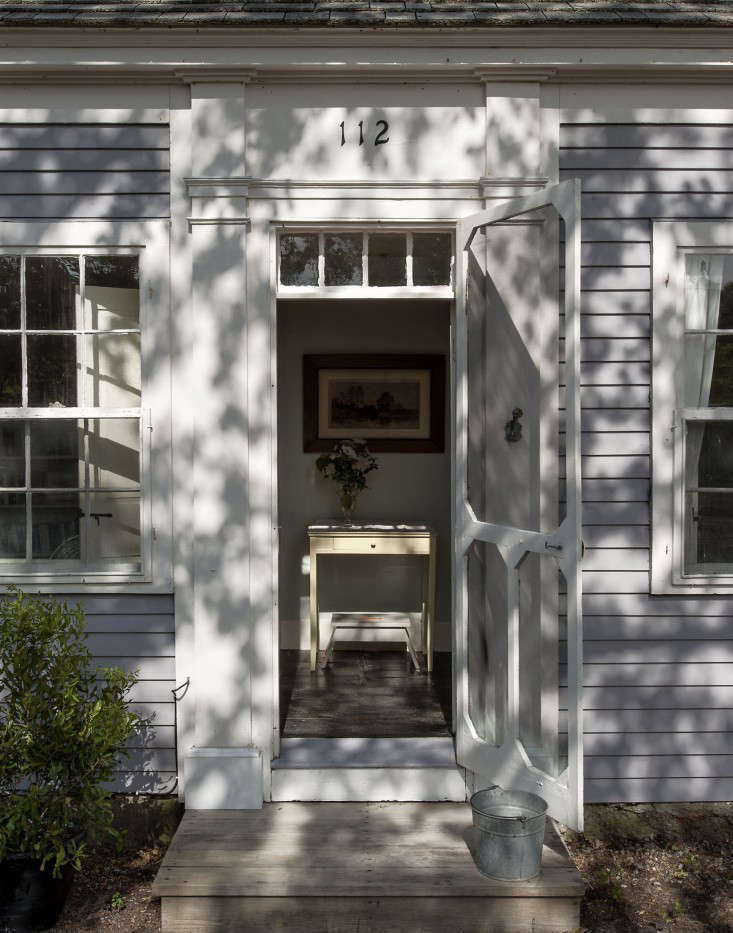 Above: The exterior is painted a pale purple-gray called Weathered Wood with White Lace trim, both from Martin Senour Paints.

Justine contributes regularly to both Remodelista and Gardenista–and writes her own blog, Design Skool. Have a look at her DIY: Razor Clam Pendant Light and see her DIYs on How To Turn Flotsam and Jetsam into Wall Art and Pressed Seaweed Prints. We’re all still talking about the Bayberry Candles she and her kids made last fall.