When I moved to London 10 years ago, I met someone who’d grown up in a city neighborhood where, he claimed, the law required every garden to have a fruit tree. Though fruit trees aren’t specifically mentioned in the lengthy design guidelines of Hampstead Garden Suburb, my friend’s neighborhood in North London, it is true that when the area was built in the early 1900s, two fruit trees were planted in every garden.

The modern-day dictates of the Suburb as it’s referred to by its residents are pretty clear, however, on many other points: house walls that were not painted when a house was built shouldn’t be painted now; garage doors must be wood, not metal or plastic; new bricks require repointing with a soft brushed joint, and, as in the early days, green hedges are to be used to mark boundaries. Green means green and appropriate: don’t even think about using a red Pieris or even a large-leaved laurel. Hedge-lined roads and towering mature trees which can’t be touched except by a committee’s approval create an atmosphere that is as green and leafy as you could imagine in any city in the world.

How do you create a garden in an environment where gardens are almost written into law? A visit to the home of Judy Green, owner of Judy Green’s Garden Store in neighboring Hampstead village, is a chance to see a masterful hand at work.

Photography by Daphne Walker for Gardenista. 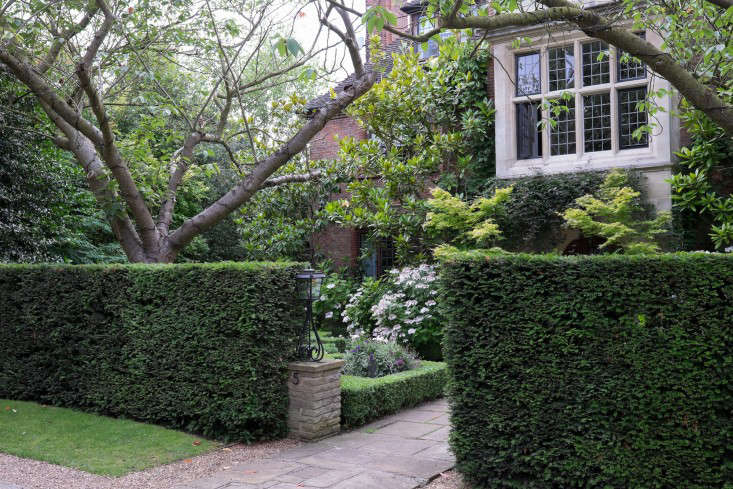 Above: A glimpse through the hedges into Judy’s garden.

From the Suburb’s conception, green hedges have been the boundary marker of choice. But you don’t even need access to a private garden to feel surrounded by the countryside; the sidewalks burst with life, and the lack of gate’s those pesky guidelines against make it possible to peek into front gardens full of color, scent, and texture, pretty much year round. 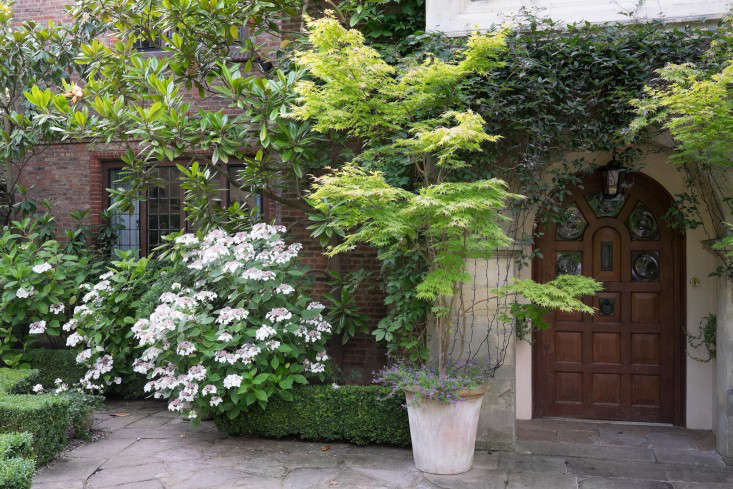 Above: Judy’s pots, in a shady spot near her Elizabethan style house (which like many Suburb houses has a recessed front door for cover from the elements).

When Henrietta Barnet founded the Suburb in 1907 her goal was to create a city neighborhood where people of different classes would live, and live well. Well-designed houses, gardens bound by hedges not fences, access to conservation land and to allotments for growing fruit and vegetables all this, minutes away from an Underground station, is still intact today, except that today’s property prices mean it’s no longer the economically diverse area it once was. 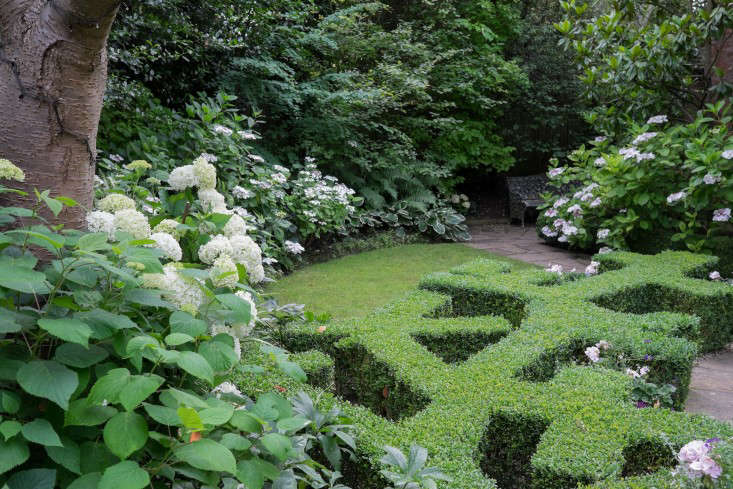 Above: Between beds of healthy lush hydrangea bushes, a geometric box parterre leads toward the back garden. 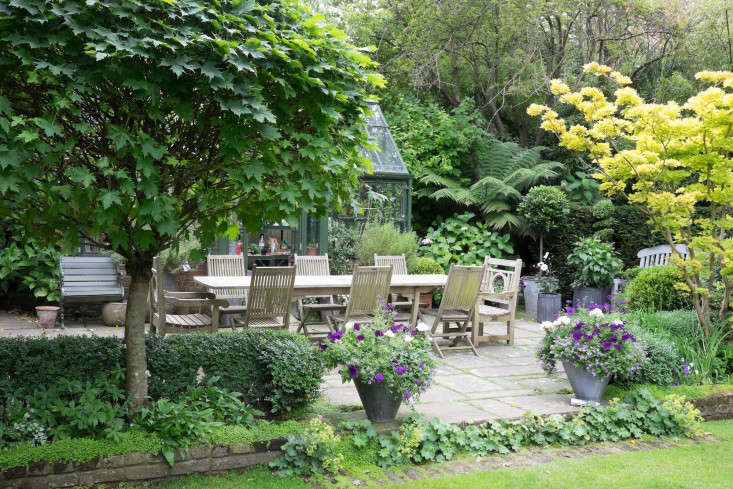 Above: Alchemilla mollis obscures the hard edge to a step linking the terrace to the rest of the back garden, and pots overflowing with annuals frame the pathway.  In the background a tree fern provides architectural structure. 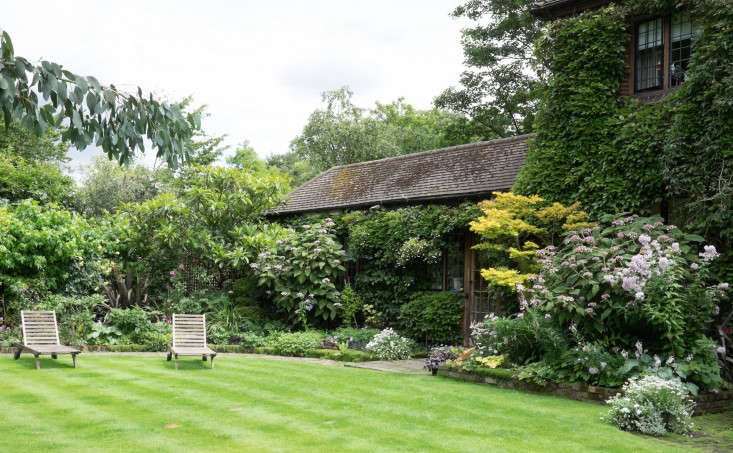 Above: Lush borders frame a wide lawn that is so well kept it could be a bowling green. Individual back gardens seem to continue far past their own boundaries into neighboring gardens that are equally green, achieving Henrietta Barnett’s aim that from every part there shall be good views or glimpses of distant country.

Suburb houses and gardens complement each other perfectly. Back in the early days when the Suburb was being created, many of Britain’s great architects were asked to design individual houses, and, sometimes, larger areas. Architect Edwin Lutyens, famed in the garden world for his collaborative work with Gertrude Jekyll, designed the Suburb’s central church and the neighborhood around it. 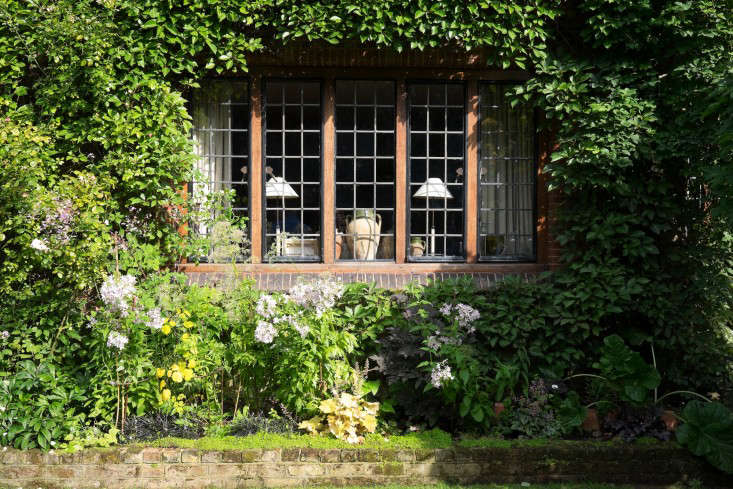 Above: Here, the planting frames a mullioned window and draws attention to the wood molding and handmade bricks of the Arts & Crafts era house. 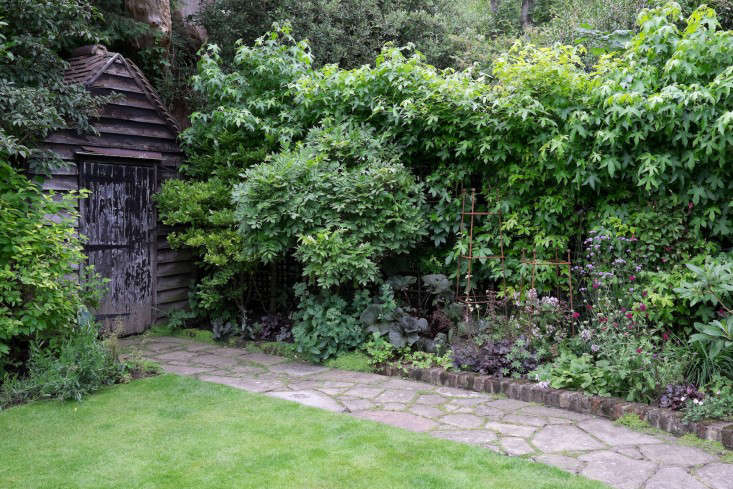 Above: The garden shed is tucked into a corner of the garden. Originally structures of any sort were discouraged in Suburb gardens, which were supposed to be oases of green. Nowadays residents can apply for permission to build one shed, in most gardens. 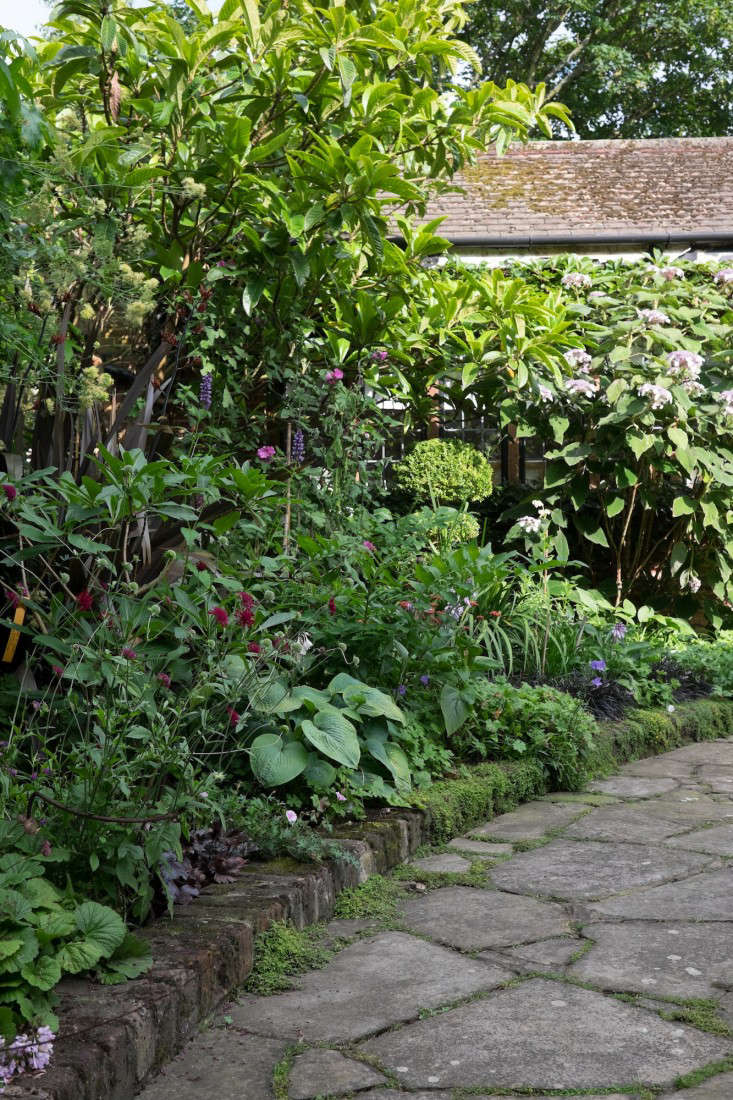 Above: Crazy paving is a traditional material for garden paths, and Judy’s is especially appropriate because of the way she has planted in the joints between stones. 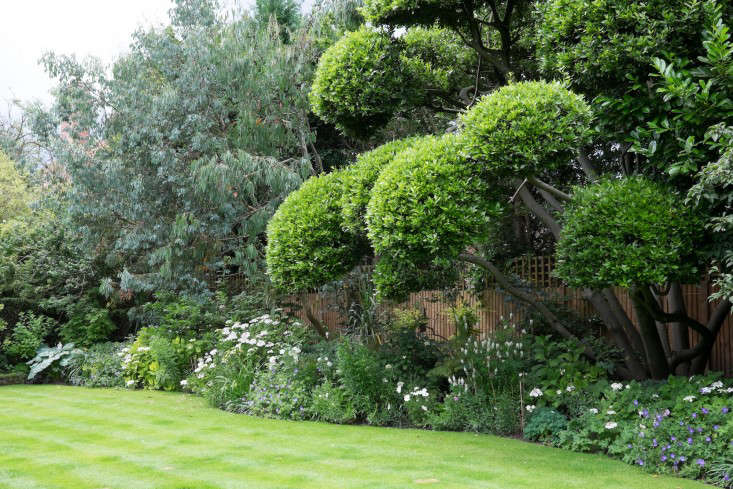 Above: Judy’s cloud pruned laurel tree gets lots of attention every year when she opens her garden to the public for a day in support of the National Gardens Scheme charity. 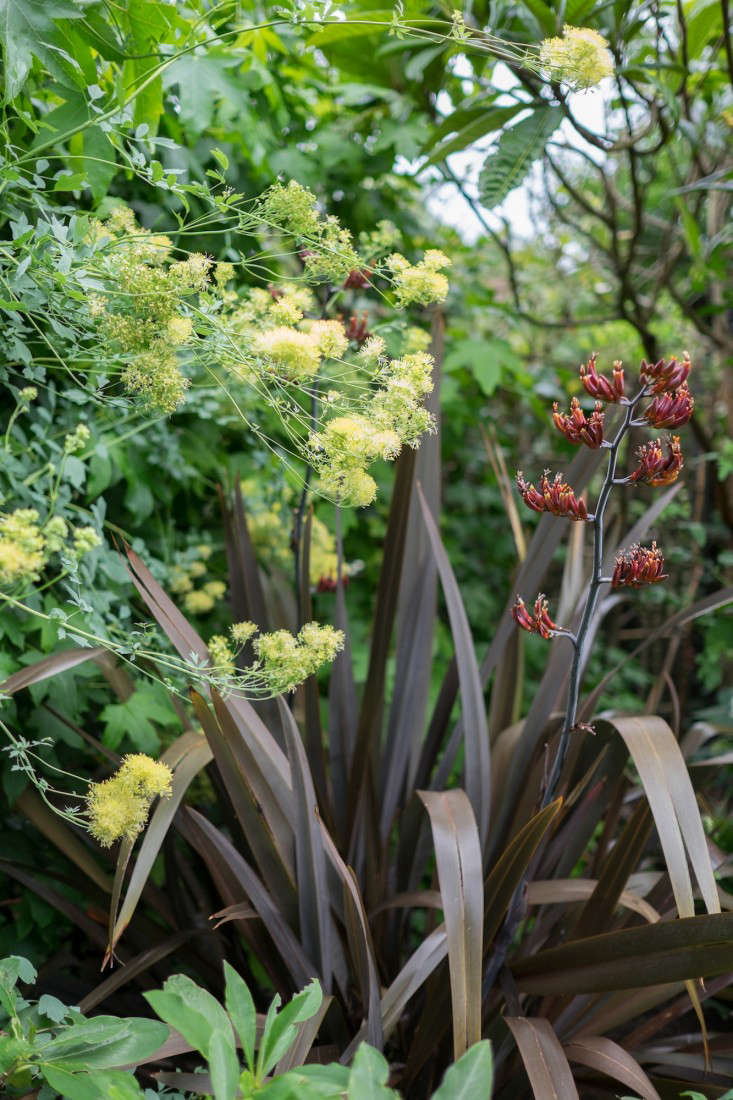 Above: Though Judy’s garden is a study in elegant restraint, there are moments of playfulness, evident in this juxtaposition of fuzzy yellow Thalictrum and strappy leafed Phormium.

You don’t have to be a gardener to move into the Suburb, but I imagine it would be pretty hard to avoid becoming one. After an afternoon in Judy Green’s garden, even a day tripper like me wants to go home and help something big, leafy, and green spring to life.

For more English gardens, see A London Terrace Gets a Grownup Update and A Living Wall in London. And on Remodelista, visit Hampstead Heath in Architect Visit: Stiff + Trevillion in Hampstead.