Behind a handsome Georgian townhouse in central London’s Islington neighborhood, garden designer Adam Shepherd transformed a damp, gloomy garden into a green escape for a young couple with a baby en route.

The only requirements from the owners were that the garden be safe enough for their coming addition and require only minimal maintenance. 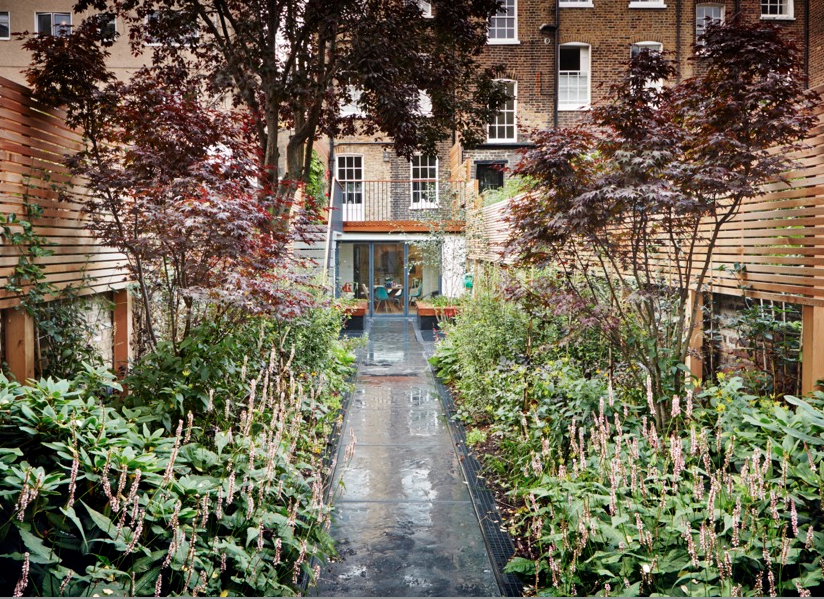 Above: Down the center of the garden is a slate walkway with drainage to clear the walk from excess water and prevent too much sogginess closer to the house.

On either side of the walkway, each main bed is filled with hardy perennials mixed with evergreen hedging. The idea was to create a modern take on the classic English garden–with a central path and double border–inspired by Hidcote Manor (the classic English garden in the north Cotswolds realized by the American horticulturalist Lawrence Johnston).

Adam explains that he tends to design planting plans in his head and in the case of this modern border, the plants are laid out exactly as you might find them in nurseries. He says, “Of course the order and selection is chosen, but the scheme is basically rows of the same plant, layered from front to back with a low planting at the start, taller plants beyond that, and a hedge to break the planting and create a sort of screen.” Adam compares garden design to building a theatrical set using “layers or screens, that people or plants can hide behind or jump out from, creating mystery and intrigue.” 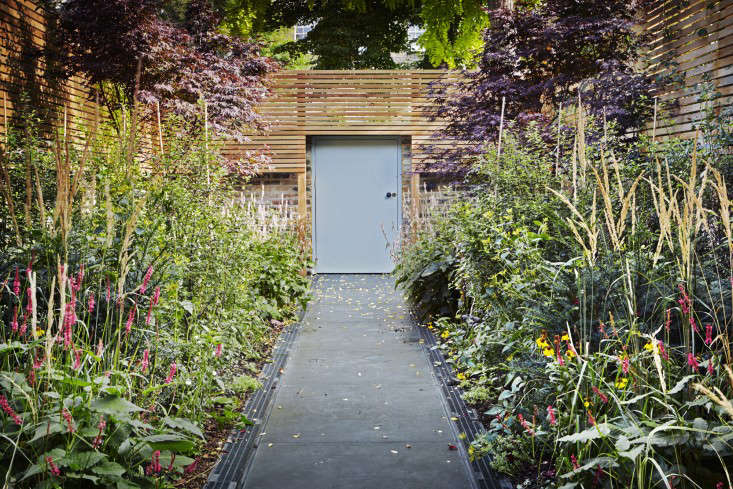 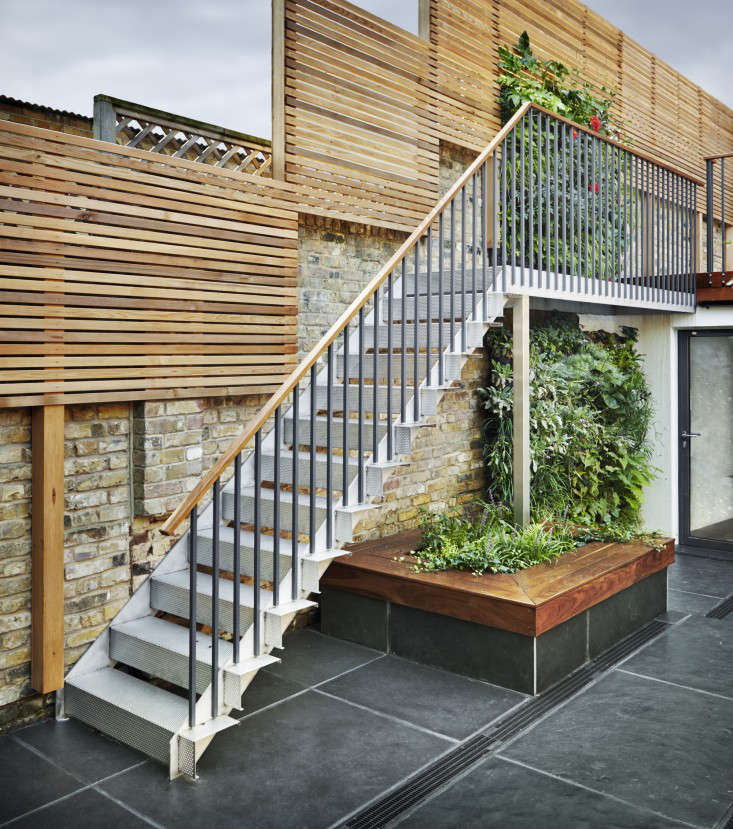 Above: A custom-designed stairway.

The garden stairs were designed by Adam and re-designed and engineered by Bob Hollywood, with whom Adam has worked on a number of projects. An original heavy stone staircase led from the upper terrace–on the roof of the kitchen–to the garden. The clients wanted to keep the roof terrace and its connection to the  garden, but Adam hoped to remove the stairs as they narrowed the garden and blocked light from the kitchen. A compromise was reached by pushing the stairs away from the back of the house and extending the landing while at the same time allowing light through the stairs through the use of perforated stainless steel.

Adam explains that to him, the end result was perfect: “The stairs look and feel very solid, but as you get closer to them they start to disappear and they of course do let light through…magic!” The spindles are powder coated steel, painted the same color as the new kitchen doors and the handrail is Ipe. 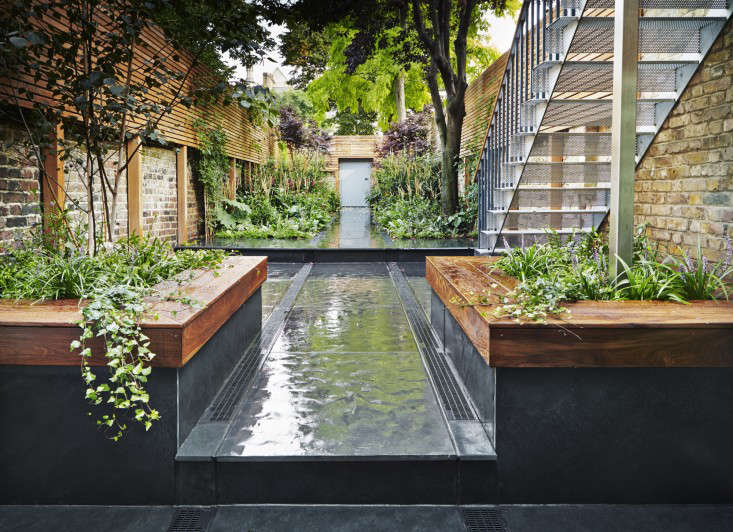 Above: Planter boxes do double duty as garden seating.

The wood decking and surrounds of the planter boxes and seating area are made from Ipe. The planters serve both form and function–allowing for additional garden seating and bringing the plants closer to the house, “like a giant outdoor vase.” The planters also serve to break the garden into distinct areas. For Adam, “they’re the first layer in the stage set…creating a visual layer or baffle that means you can’t quite see past them and need to go out and walk into the garden to see what else lies in store.” 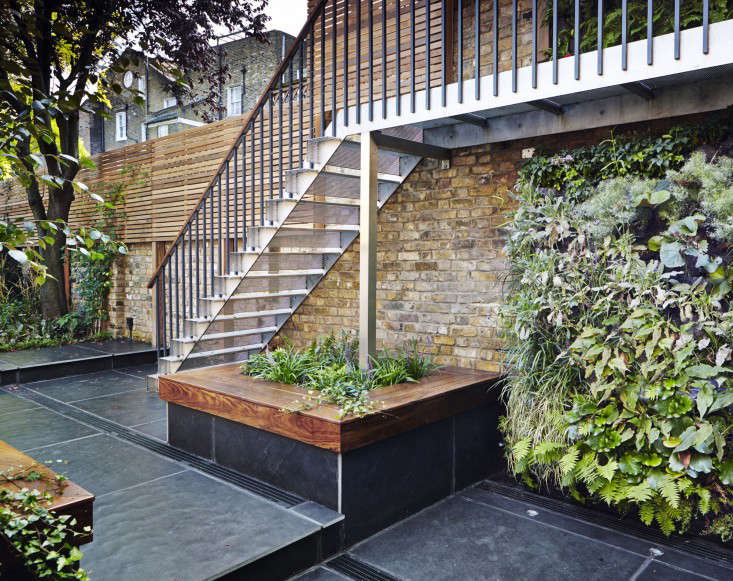 Above: Another view of the staircase and living wall.

A living wall scales the side of the garden on either side of the staircase. Inspired by the famous living walls of French botanist and vertical planting pioneer, Patrick Blanc, Adam has installed five living wall installations to date, and they’re something that he believes will be future of urban garden design. The plants on this wall are hydroponic, living in virtually no soil. Instead, nutrients are supplied via liquid feed that is fully automated so that the clients don’t have to worry about having to maintain it.

Adam says that plant selection for vertical living walls is critical: “The planting plan is designed according to the specific climatic restraints of the location, but I always like to experiment, throwing in a few species I’ve never tried before. Surely this is the whole point of being a designer!” Plants in this wall include evergreens like Fatsia japonica, flowering perennials such as Bergenia “˜Bressingham White’ and Persicaria amplexicaulis ‘Firetail,’ grasses like Carex oshimensis “˜Evergold’, and ferns such as Polystichum setiferums and Asplenium scolopendrium among others. 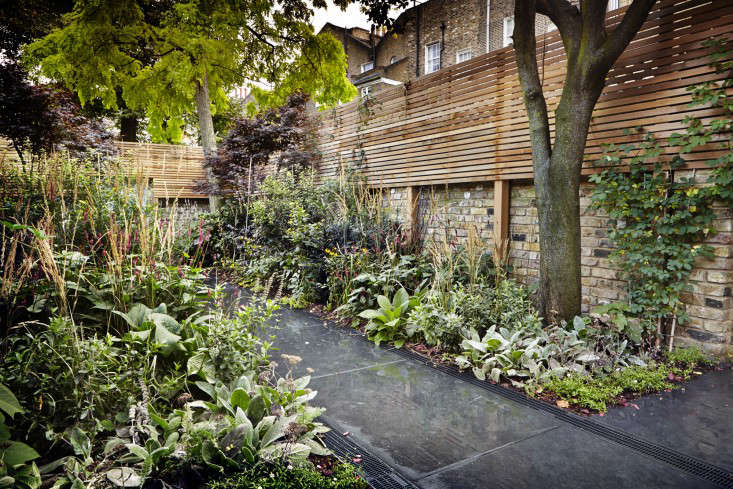 Above: Above the stone garden wall, a wooden trellis.

The trellis demarcates the barrier between this garden and the next and provides some privacy. It’s made of Western Red Cedar and planted with roses and honeysuckle (Lonicera japonica ‘Halliana’).

Trending on Remodelista: Holidays Ahead

DIY: Snowballs for the Christmas Tree