Search
A recent survey of landscape designers voted boxwood the most popular shrub in America and the American Boxwood Society lists 365 cultivars. But when most people think of boxwood, they think of English boxwood. Buxus sempervirens ‘Suffruticosa’ is the stately form in the gardens of royalty. With a tidy growing habit and small, glossy leaves easily shaped into a topiary ball, cone, or rectangle (or even an elephant), it lends an air of European formality to any garden.

But English box is extremely slow growing and therefore more expensive than its American and Asian counterparts. Another drawback is its susceptibility to a devastating and widespread blight caused by the fungus Cylindrocladium buxicola.

Is English box the best choice for your garden? Or would you be better off with another shrub? Read on to decide:

What’s so special about English box? 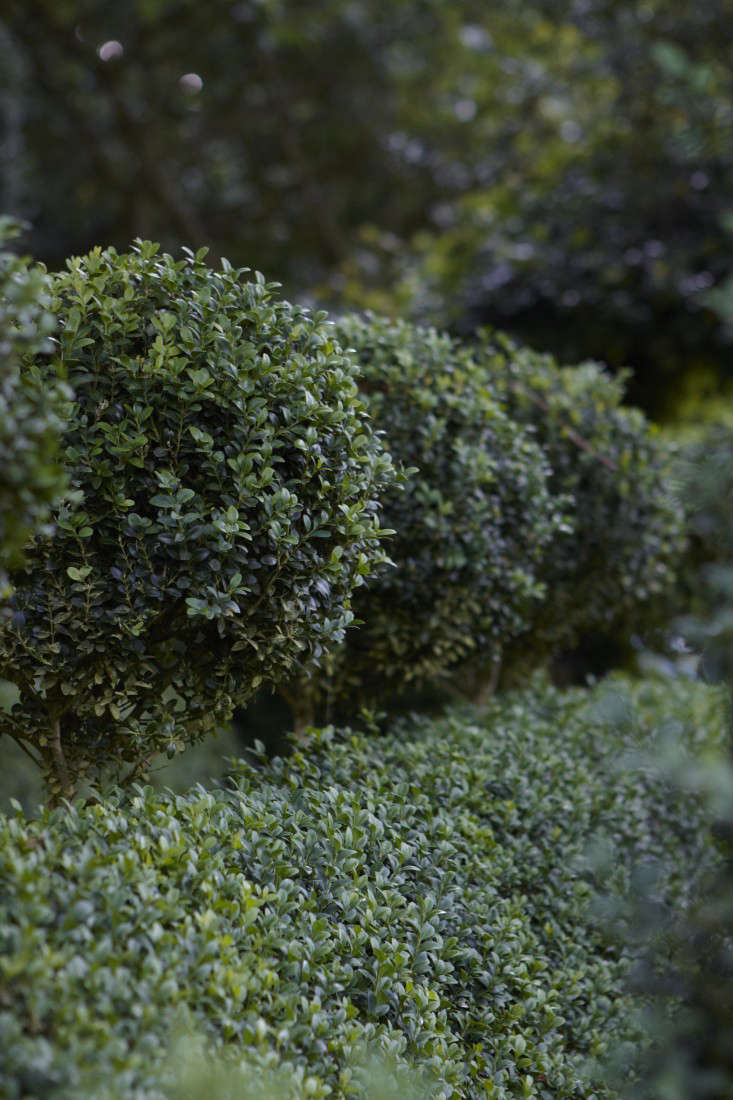 Above: English boxwood is a multi-stemmed, shallow-rooted shrub covered with small, rounded, glossy, dark green leaves.  Flowers tend to be insignificant, but the plant has a very compact, tight habit which gives it a thick, even form when it is clipped. 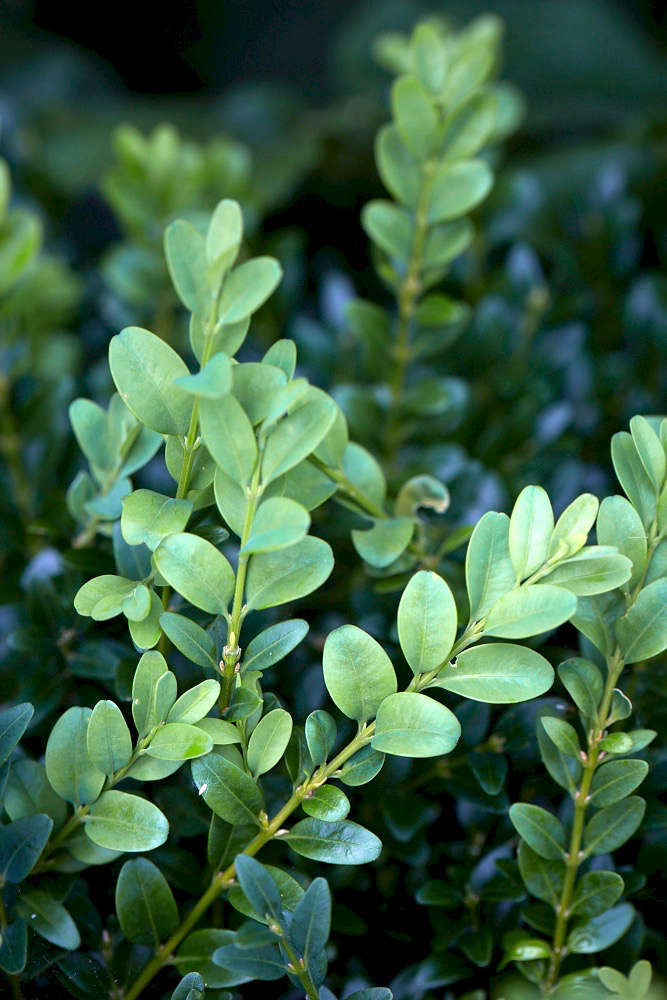 Above: English box takes readily to pruning and shaping, a trait that has made it popular through the ages with gardeners who use it to create ornamental hedges, borders, barriers, and all sorts of geometric as well as fanciful shapes.  Modern gardeners especially appreciate its lack of appeal to deer.

Where did English boxwood come from? 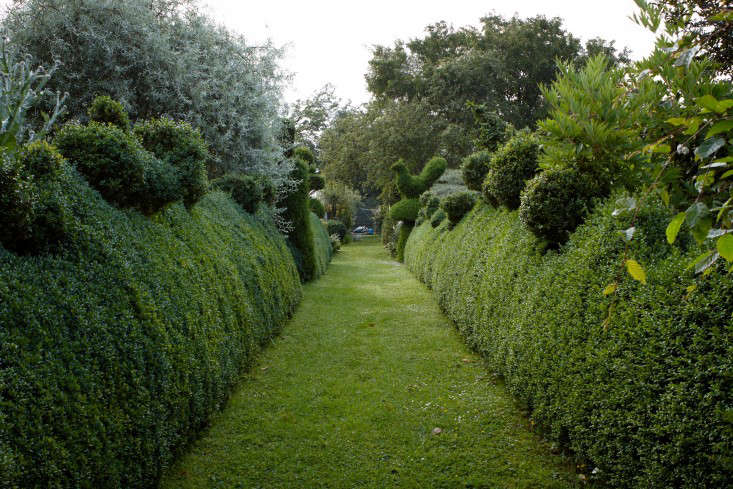 Boxwood is one of the oldest plants to be cultivated by humans.  It is thought to have been planted by ancient Egyptians, Greeks, and Romans.  Landscape designer Andrea Filippone of AJF Design in Pottersville, NJ says the Romans brought boxwood with them as they conquered Europe.  The shrub can be seen in designs for their courtyards. Boughs of boxwood were used in religious ceremonies such as weddings to fend off evil spirits.  Boxwood may have gotten its name from its smooth, very hard wood which has been used for centuries to make engravings, inlays, musical instruments and, yes, boxes.  It was brought from Europe to the United States in the colonial period, possibly by the Dutch, as early as 1653.

Why did English boxwood become so popular? 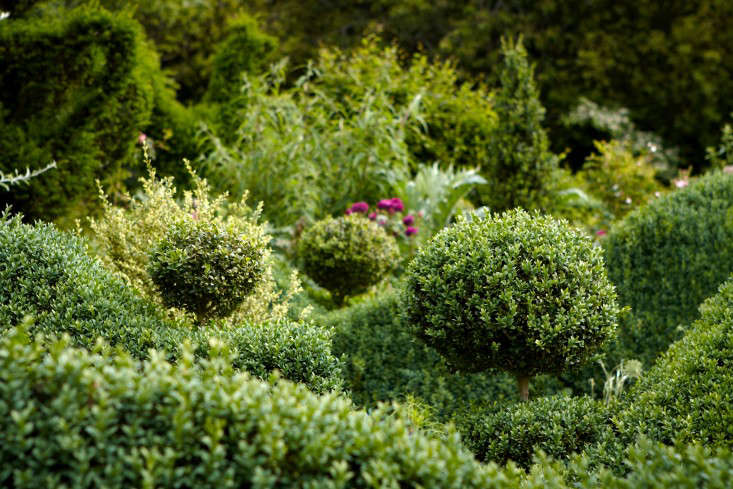 Above: Probably the most famous gardens associated with English boxwood are those at Versailles, but lots of well-known examples exist right here in the U.S.  For instance, Mount Vernon, the home of George Washington, and Williamsburg in Virginia both have examples of colonial era boxwood plantings.  Modern landscape designers are also fans.  Frenchman Louis Benech is known for adorning sweeping vistas with understated boxwood rectangles. And in the Netherlands Jacques Wirtz revolutionized the use of boxwood with his unique undulating cloud pruning. 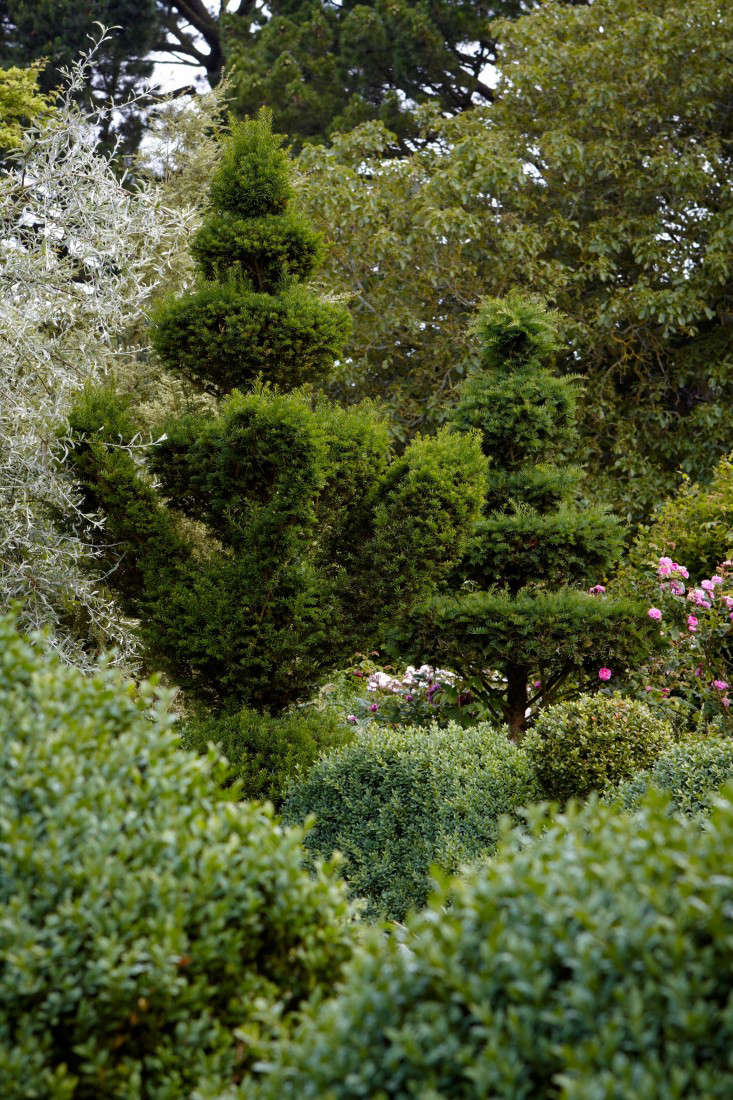 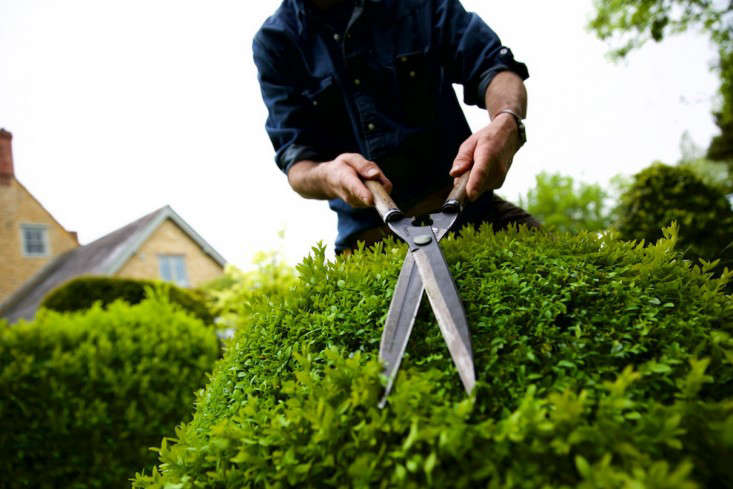 Above: Hobson’s tool of choice for shaping English box hedges is a pair of Japan-made Masamune Shears, which Hobson sells in his Niwaki tools shop. The shears are available in two sizes, at prices ranging from £104.17 to £125 (on back order until the end of October). Photograph courtesy of Niwaki.

How bad is the boxwood blight situation? 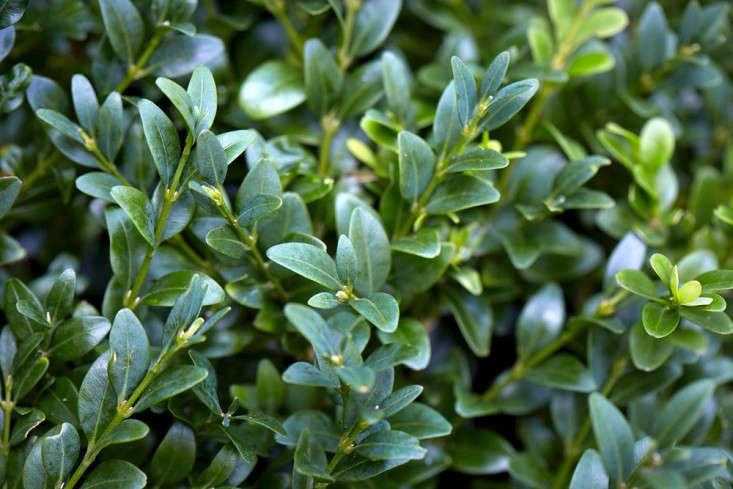 Above: Today many gardeners are having to re-think their use of English boxwood. Besides pests, (box tree moth, leaf miners, mites, scale) and diseases (rust, root rot) that have traditionally plagued this plant, there is now a major scourge attacking boxwoods throughout the world.  Boxwood blight is a virus that causes plants to turn brown and defoliate.  It thrives in warm, humid conditions and will pass to a healthy plant if an affected one merely touches it.  It can therefore easily wreak havoc on hedges where plants are grown close together. 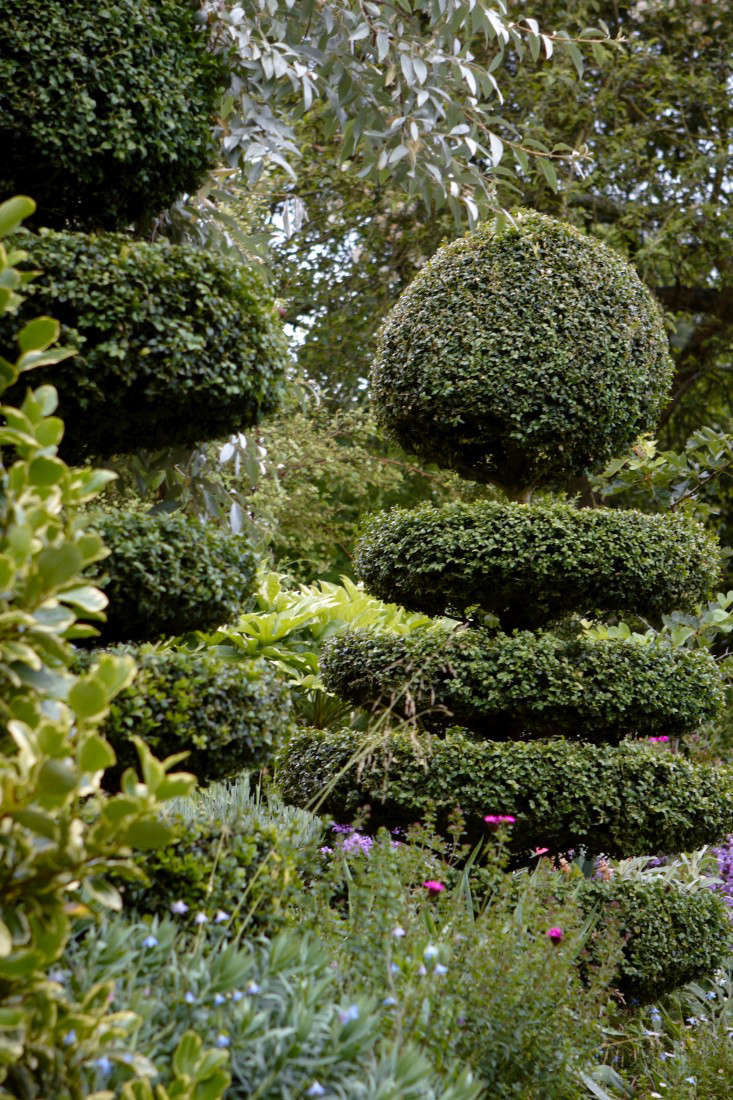 Above: While all types of boxwood are vulnerable,  Andrea Filippone, who specializes in growing boxwood and has been studying the blight, says English boxwood is especially at risk.  Its tightly spaced leaves and branches can provide a perfect dark moist place for the blight to thrive. According to Filippone, many famous old European gardens, including Versailles, are replacing their English boxwood with other varieties including American.

How can I keep boxwood healthy? 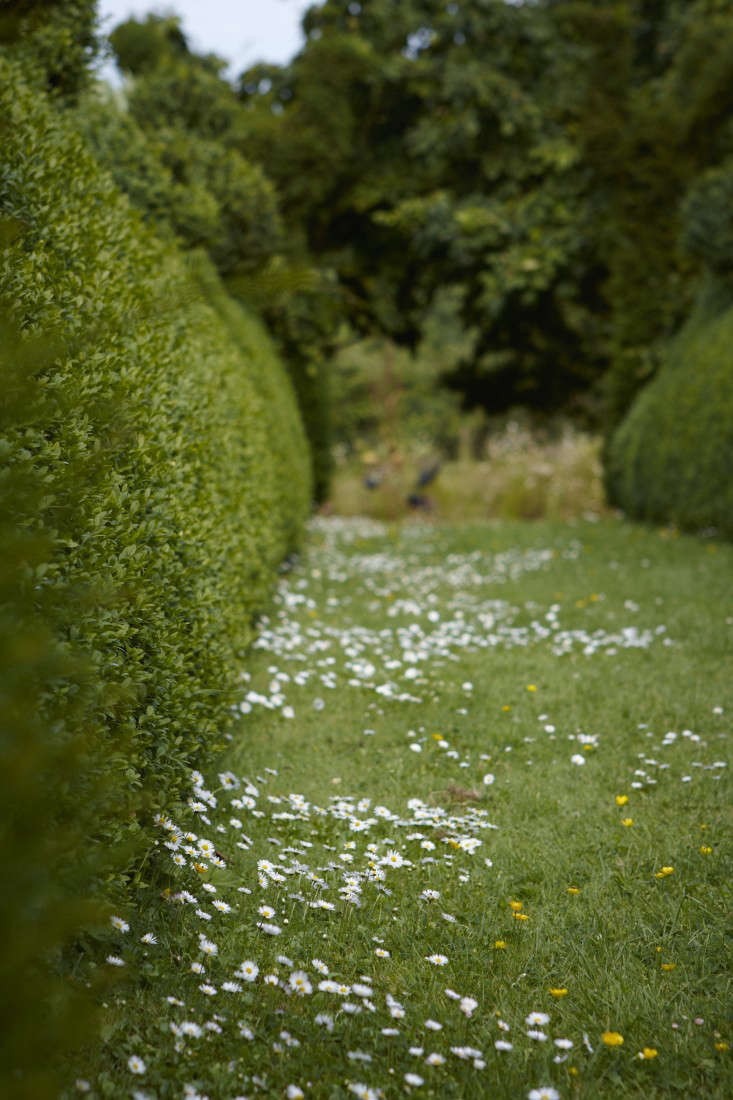 Above: Because there is currently no blight resistant variety of boxwood, be sure to follow these preventative guidelines for the boxwood you choose for your garden.  Do not put your new plants in a location that formerly held infected boxwood.  Do not use overhead watering.  Do use drip irrigation sparingly, only in times of drought after your new plants have been established. Do not fertilize.

As with all plants you buy, patronize a reputable nursery, preferably one that is growing its own boxwood.  Blight can be suppressed by spraying with fungicides. If your boxwood is affected and has been treated this way by the seller, it will only be a matter of time before the symptoms of blight appear… a most unwelcome and troublesome intruder in your garden.

What are the best boxwood alternatives? 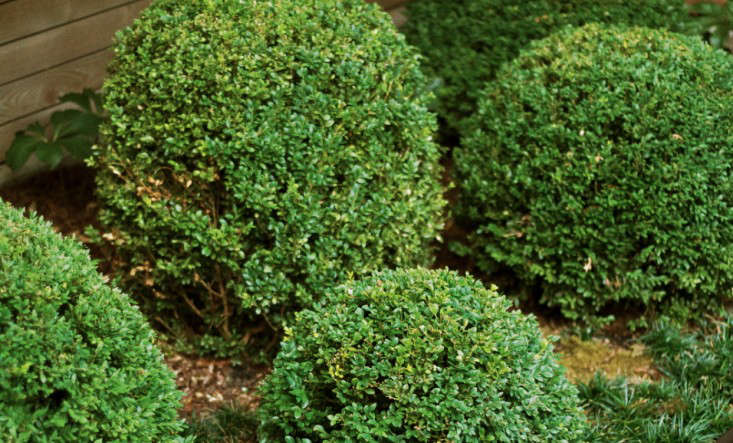 Above:  Balls of Buxus ‘Green Gem’ grow in a Brooklyn garden. Photograph by Matthew Williams for Gardenista.

With more than 365 cultivars available, there are plenty of alternatives to English boxwood.  Filippone is enthusiastic about a series of boxwood hybrids from Canada which include Green Mountain, Green Gem, and Green Velvet.  They tolerate very cold weather and are well suited for containers.

American and Asian varieties are not only less expensive but tend to have a looser, more open habit that allows better air circulation and is not so hospitable to blight. Filippone advises home gardeners to think carefully about how they will use their boxwood before they buy.  Do they want a tall hedge, a short edging plant or something for a container? A feature of the AJF Design website is a chart that compares features of various types of boxwood, including rate of growth and color.

Above: One recommended variety is Buxus sinica var. insularis ‘Justin Brouwers’ (in the foreground)  which is a good, small, dark green plant that works well in low hedges, parterres, or knot gardens. Photograph by Matthew Williams for Gardenista.

Asian boxwoods such as Buxus microphylla var. japonica “Winter Gem” are well suited to the extreme climate demands of the northeast U.S., but tend to bronze in winter.  Green color usually returns in summer, but many gardeners may find the japonicas’ cold weather discoloration unappealing. 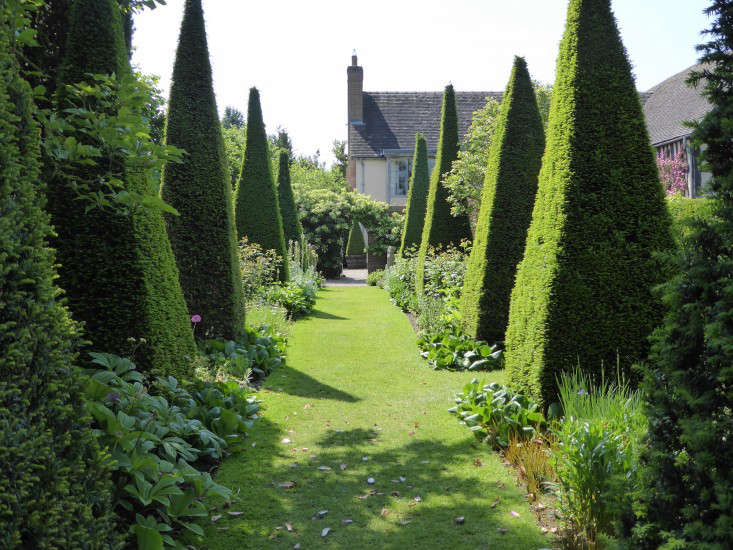 For topiaries, “I use things like Phillyrea latifolia as much as possible—it’s not as good for smaller shapes, but makes a great 5-foot-plus plant,” says Hobson of Niwaki. “And of course Taxus is the other great English choice, but again, it really needs to be quite large.”

“When using substitutes for box, we have to change our way of looking and thinking and accept that they are different and will never be a direct swap,” says Hobson. “We need to embrace the new qualities they bring, and not mourn the lost ones.”

See more tips for care and pruning at Boxwood: A Field Guide to Planting, Care & Design and some of our favorite evergreen alternatives to box in our curated design guide to Shrubs 101, including Yew, Rosemary, and Privet. Read more about boxwood: