Last month we visited Honey Grove, off a long dirt road one mile (as the crow flies) from the Comox Bay on Vancouver Island. There Nao Sims and her husband, Mark, have created a garden that is a haven for hummingbirds, butterflies, and anyone who loves luminous cut flowers.

Nao raises flowers for the romantic bouquets she sells on Saturdays at the Farmers’ Market in nearby Courtenay. Today we follow her from field to market: 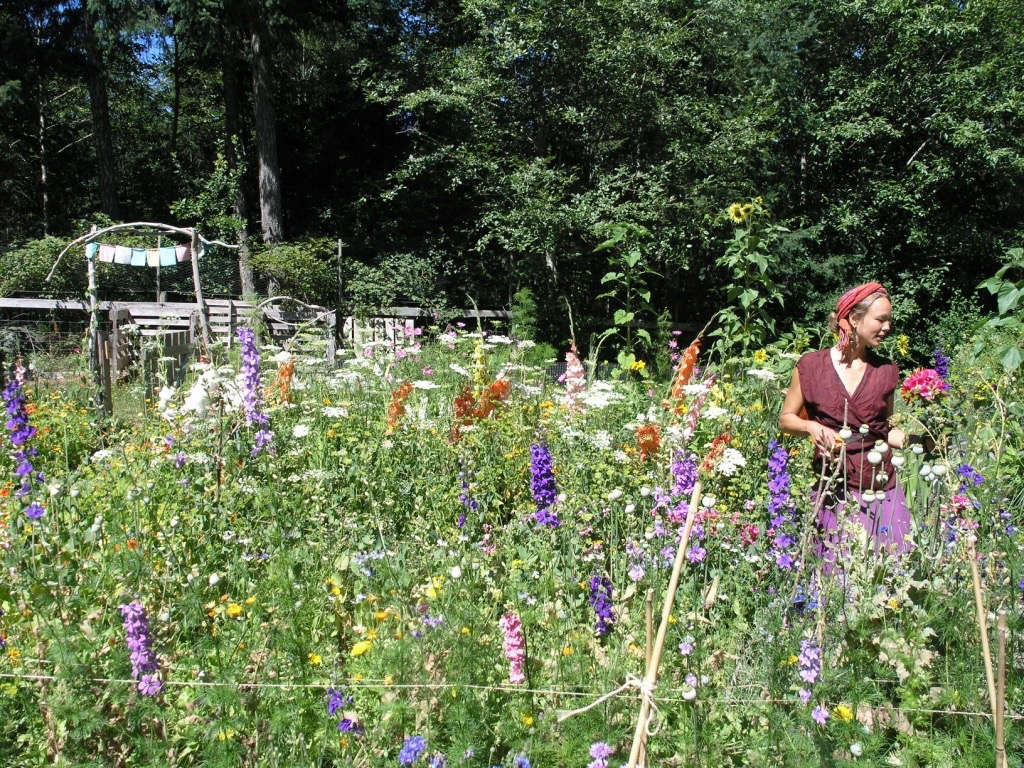 Above: Nao among delphiniums, poppy pods, and several varieties of love-in-a-mist, including the blue and white ‘African Queen’ (Nigella hispanica.) Flowers take up almost half of the summer garden.

The Honey Grove garden is also a practical one, providing most of the year’s potatoes, tomatoes, onions, garlic, and a summer-long buffet of salad greens. For Nao, practicality and beauty go hand in hand. “Beauty is just as nourishing and necessary to us as food,” she says. 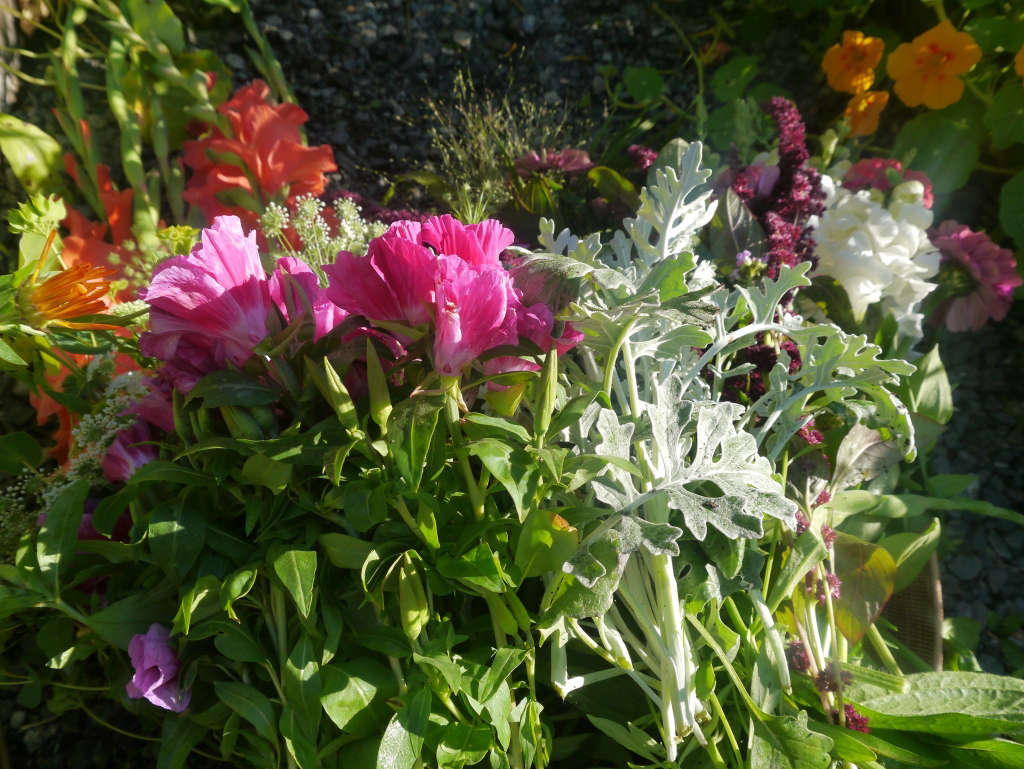 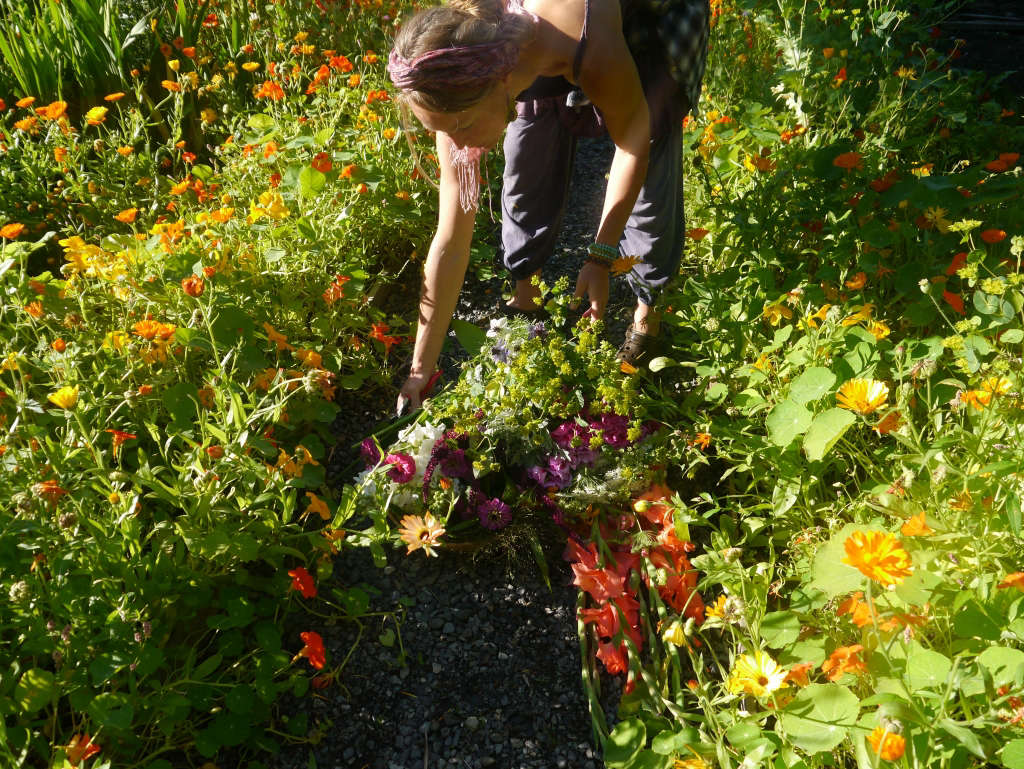 Above: “I’ve always seen the world through rose-colored glasses,” says Nao. “I like everything better with a good bit of whimsy. I like my bouquets best when they feel like they’ve been gathered from a meadow and arranged intuitively.”

Since last summer, when Mark launched his wood-fired bakery at Honey Grove, the Simses have been selling out of their 64 loaves of sourdough bread within an hour at the Saturday market. Nao, who initially planted her flowers as forage for her bees, decided to add bouquets to the summer stall to sell alongside the baked goods, seeing that she always had more than enough to go around. 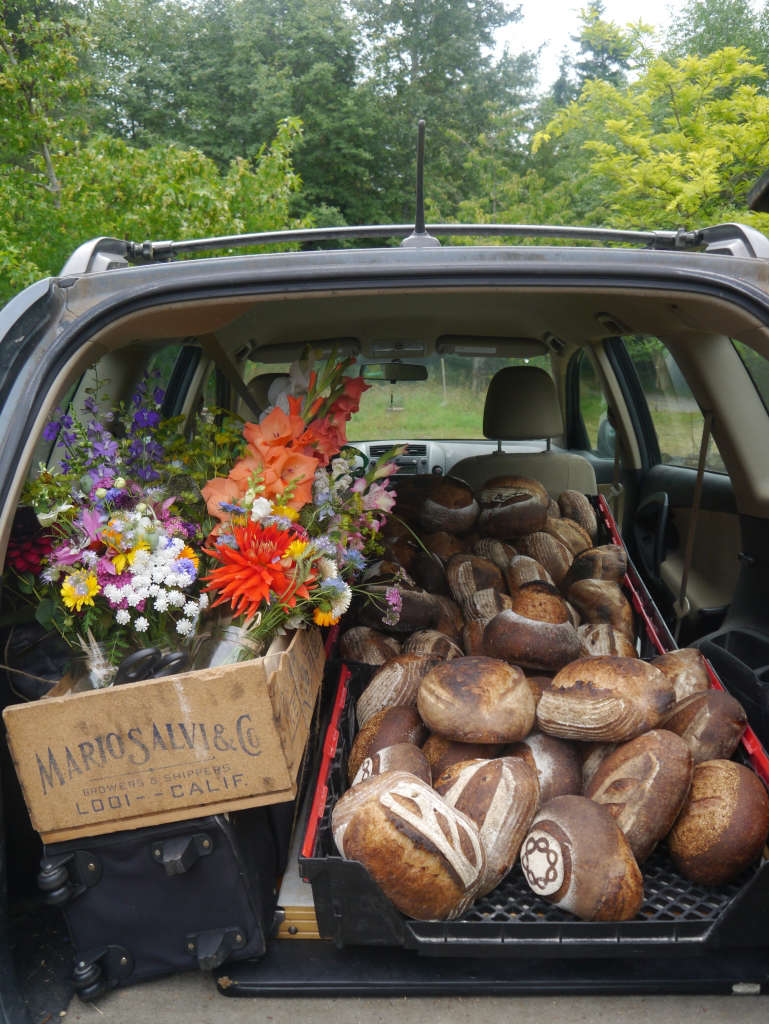 Above: Bouquets and bread, ready for market. 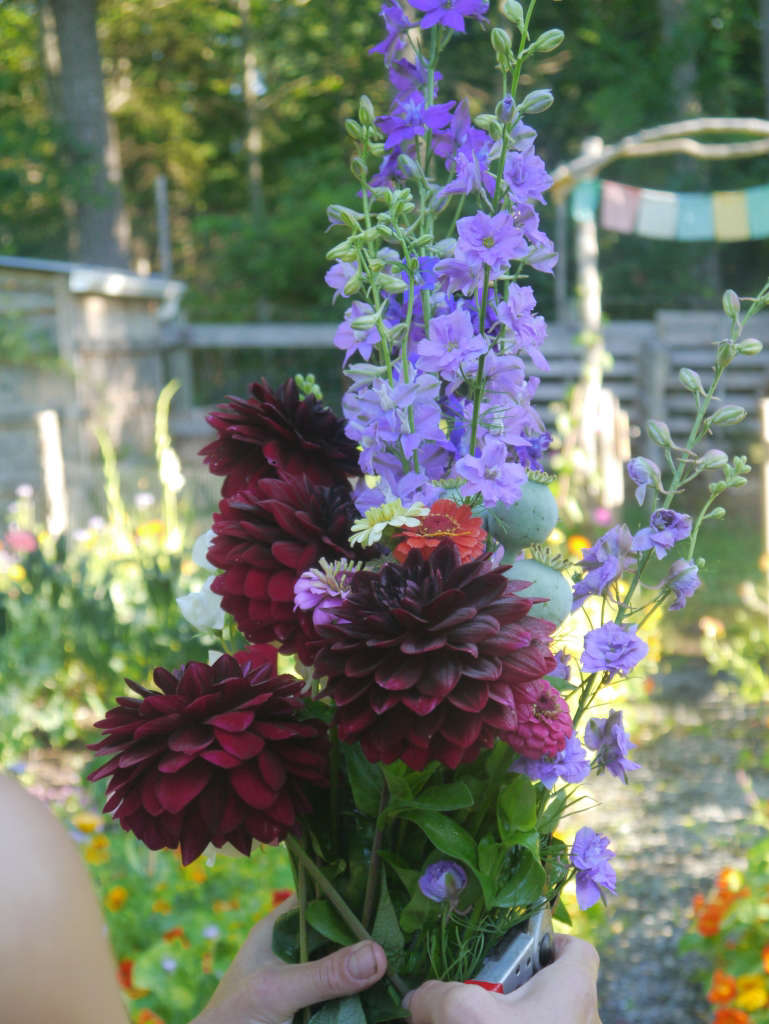 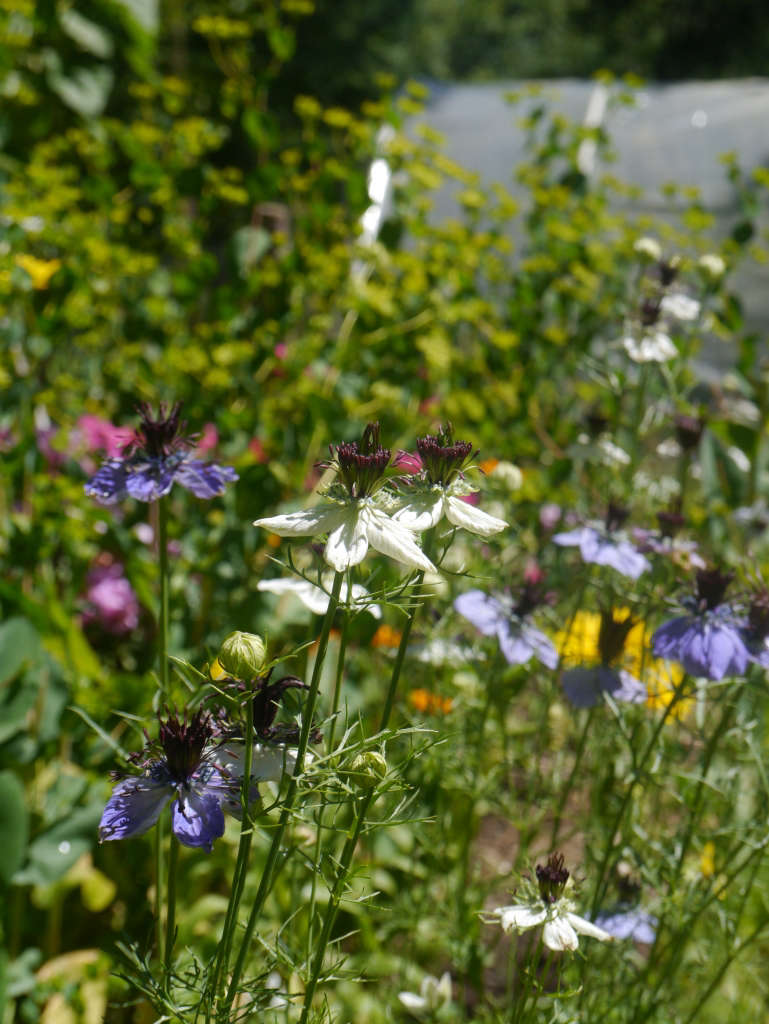 “Mark’s father is an English horticulturalist, so he’s given me many ideas about what kinds of flowers last a long time in vases,” says Nao. “But mostly I’ve gone with the flowers that my bees like best, such as calendula, sunflowers, cosmos, and poppies, and the ones that just make me happy, like the giant dahlias. I grow many of the same ones from seeds saved over the years, but I always leave space for two rows of something new, something I’ve never grown before. This year, it was a new kind of Nigella called the ‘African Queen’.” 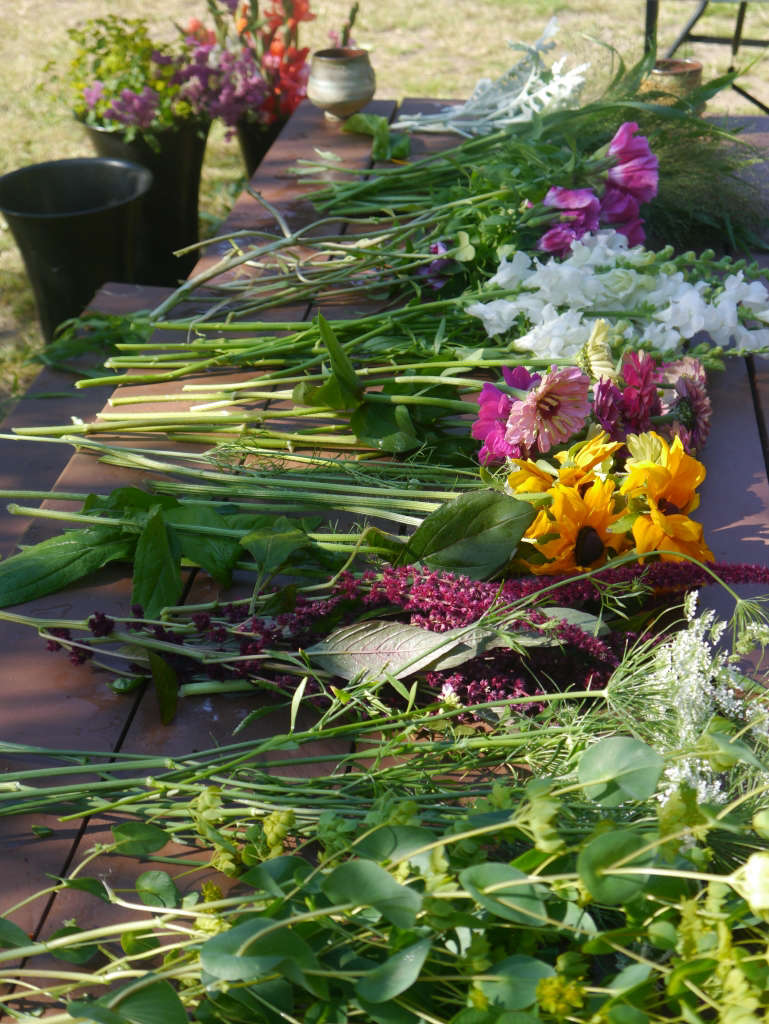 “Let your creative heart guide you,” says Nao, moving gracefully between the piles of blooms we’ve laid across the table in the morning shade, picking up a sprig of amaranth here, a zinnia or a white snapdragon there. 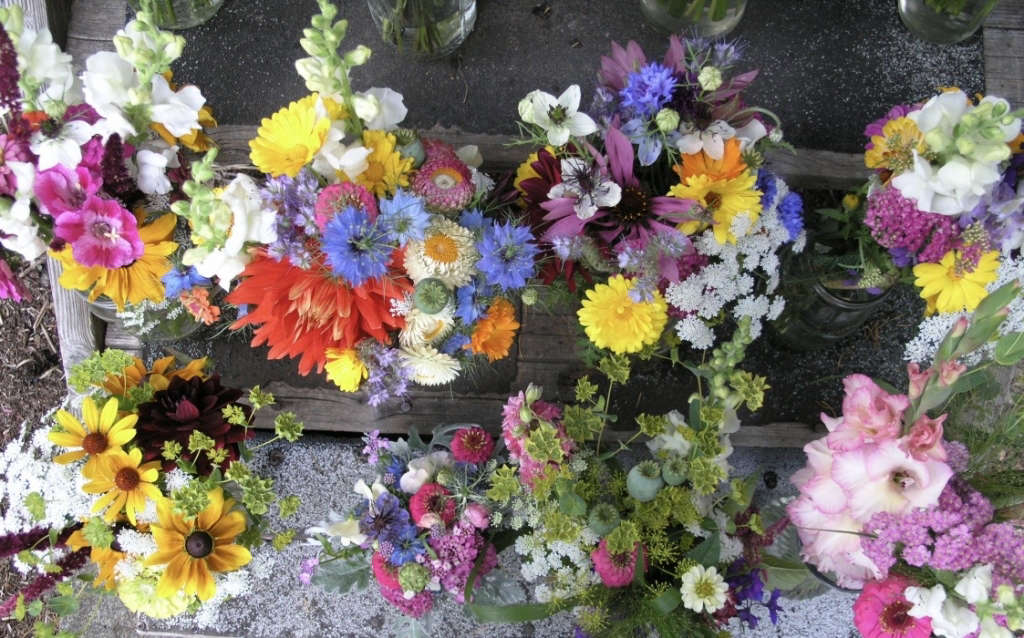 Above: “Sometimes I let my hands create them while my mind just wanders. I find I make my best bouquets when I am not ‘thinking’ too much about them,” says Nao. 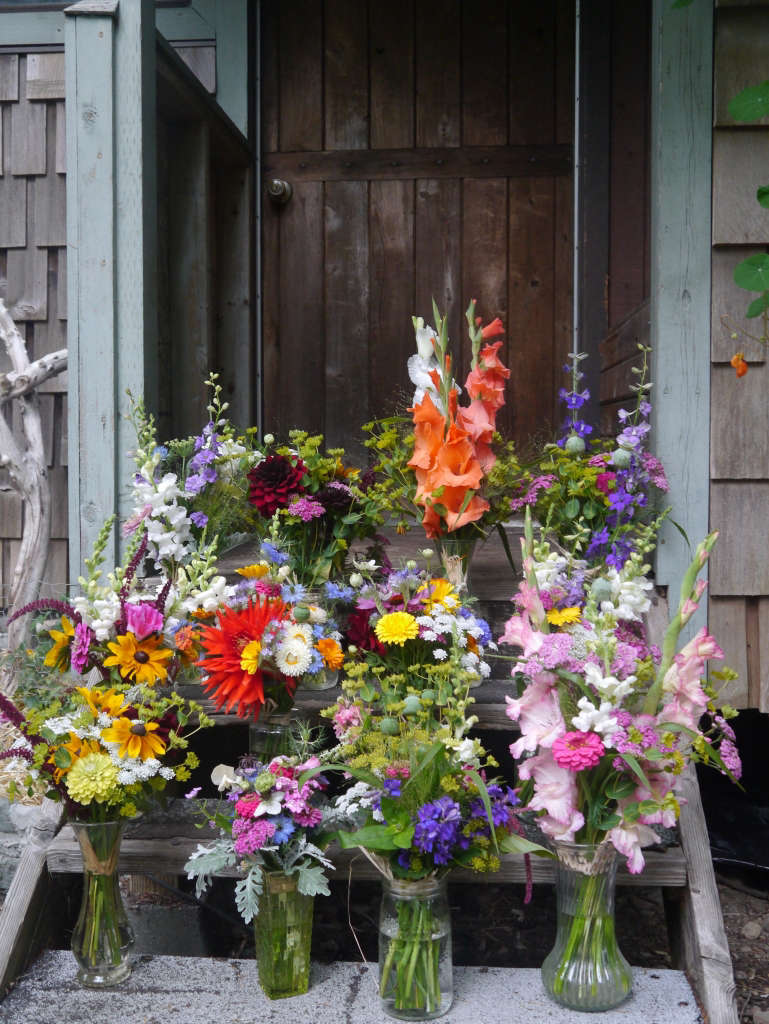 Above: Twelve bouquets ready for the market. After a night in water, they are all plump and bright, looking even better than the day they were cut. 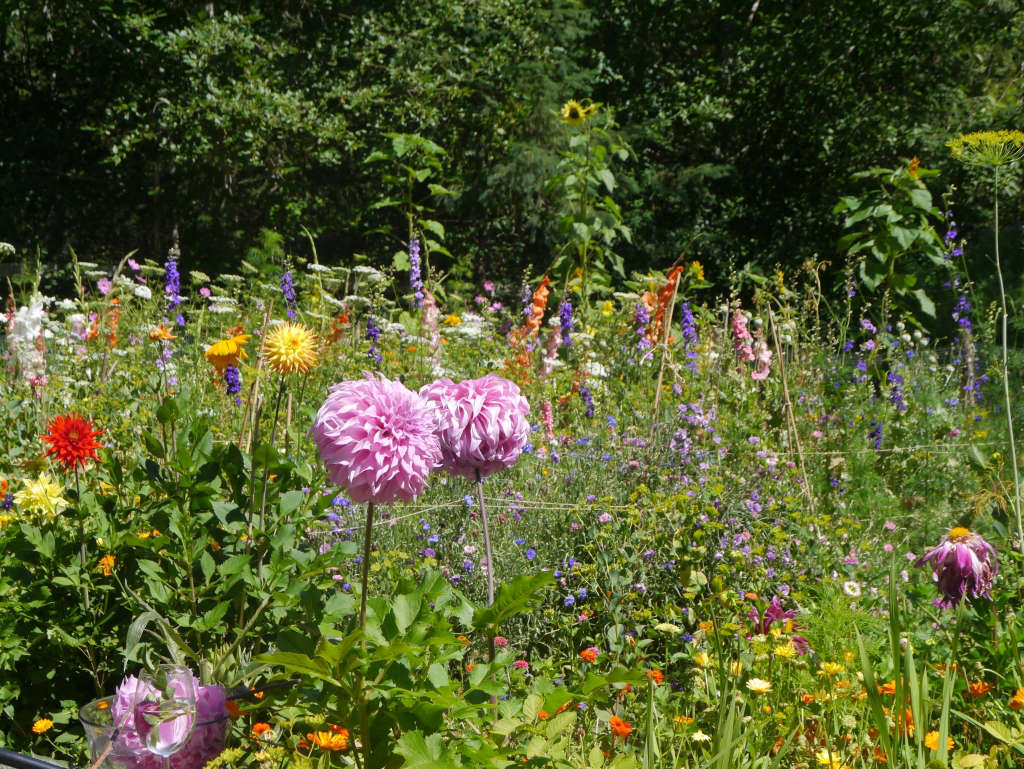 Above: Nao’s cut flowers reflect the wild grace of the Honey Grove garden. Giant pink dahlias are in the foreground. 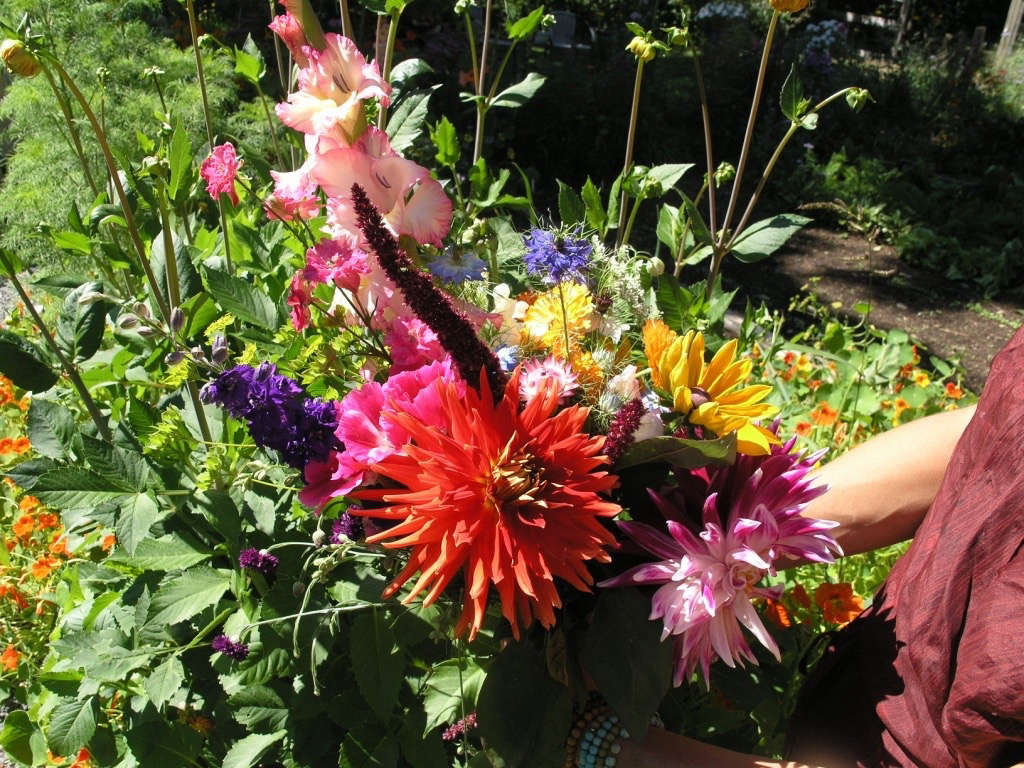 As for the particular radiance of her garden come summer—besides the steer manure, the seaweed, and careful hand watering with hose and sprinkler—“Hand watering keeps me more conscious,” says Nao, “I have to really be in tune with the plants, to check in and see how they are doing and what they need every single day, a few times a day” — maybe it’s the fact that she sings to her flowers which makes Nao’s garden so especially luminous and healthy. “They seem to love it,” says Nao, “and there is something about flowers that just makes one want to burst into song anyway!” 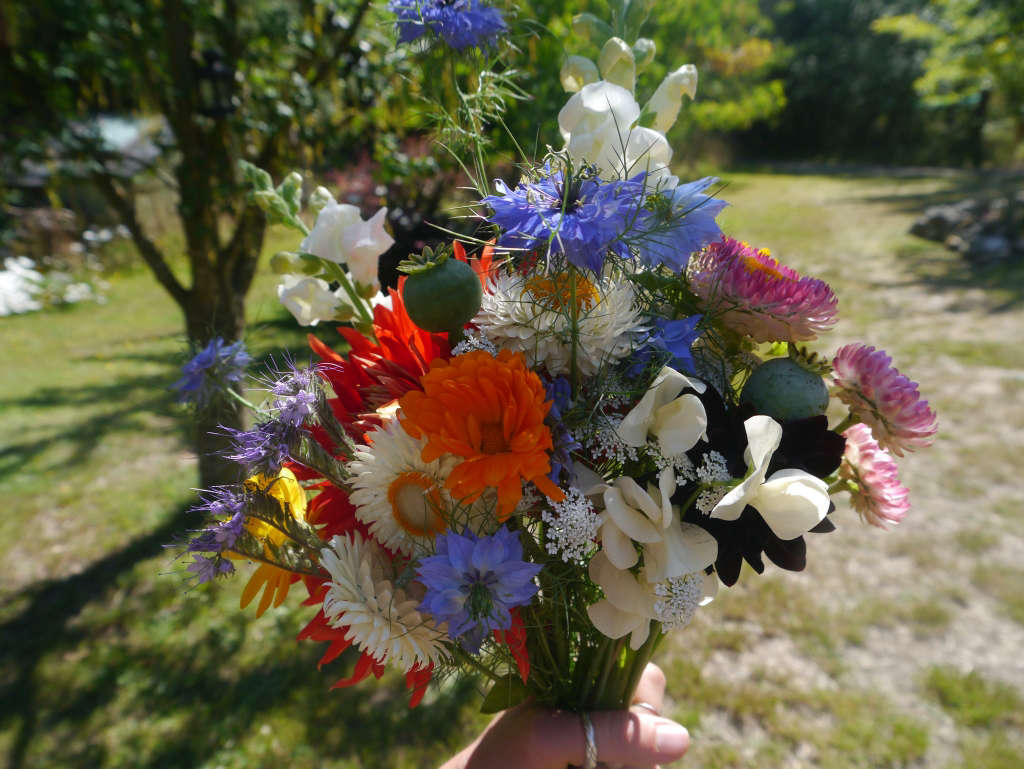 English Boxwood: Is It Worth It?

The Garden Decoder: What Are ‘Biennials’?