One of the first landscape projects that designers Anishka Clarke and Niya Bascom took on five years ago when they were launching their business was a backyard garden in Brooklyn’s Crown Heights neighborhood that had suffered a typical city fate. A single big tree cast dense shade over a scruffy patch of grass, hemmed in by a poured-concrete walkway. The 484-square-foot space looked like a small, sad rectangle of land that no one loved very much.

But Clarke and Bascom, partners in Brooklyn-based Ishka Designs, saw possibilities. “This client had a young child and also entertained a lot in the backyard,” says Clarke. “So we decided to keep it very minimal as well as give the space the flexibility to transform.”

Less than a month later, the change was remarkable: 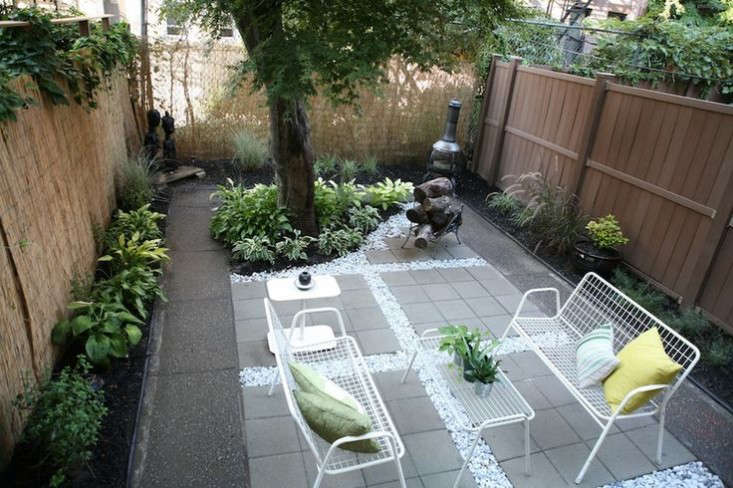 Above: The designers decided to work with instead of against the big Japanese maple tree. “We liked the idea of creating contrast, with the very organic shape of this off-center tree and a uniform paver and stone patio,” says Clarke.

After coming up with a design, Clarke and Bascom also “did the installation,” as they say in the business. In other words, over the course of a couple of weeks, “we did all the laborious tasks ourselves including bag sand, lift sand, dig trenches, break bricks, displace dirt, haul pavers, lay pavers, dodge mosquitos, kill mosquitos,” Clarke says. 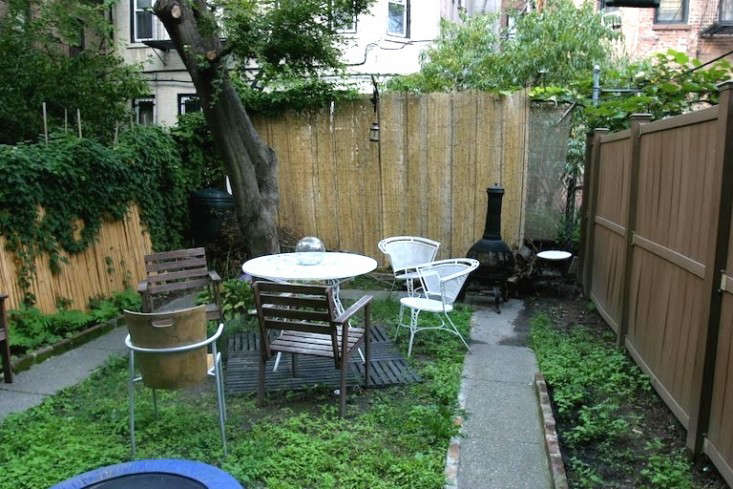 Above: “The shell of the hardscaping was there–the concrete walkway–but the garden was very overrun and it was just a hodgepodge of things,” says Clarke. 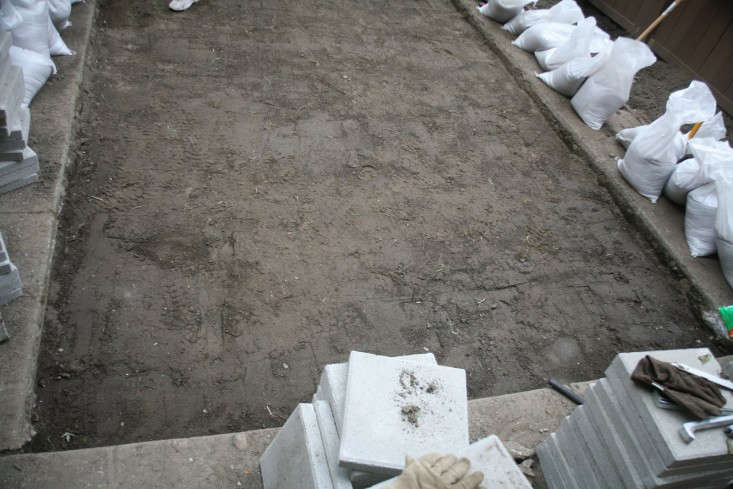 Above: The plan was to use the poured-concrete path, which ran in a U-shape around the perimeter of the garden, as a frame for a new patio. To create the patio, Clarke and Bascom tore out the turf and leveled the dirt to make a flat surface for the new pavers. 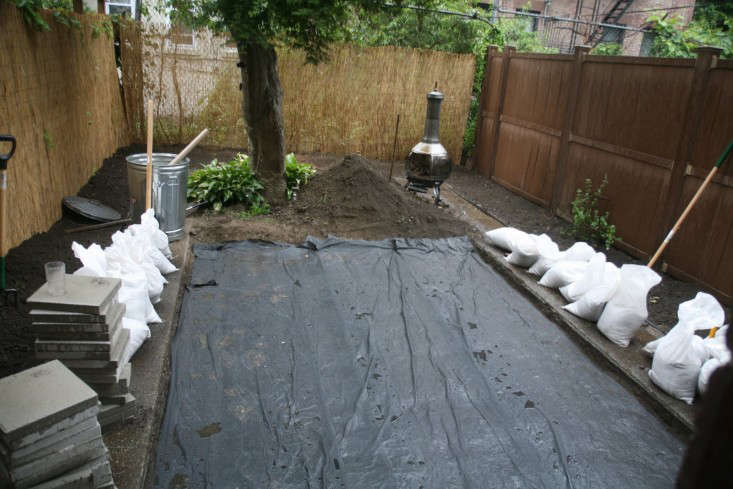 Above: The designers covered the leveled dirt with a layer of landscape fabric to create a weed barrier. 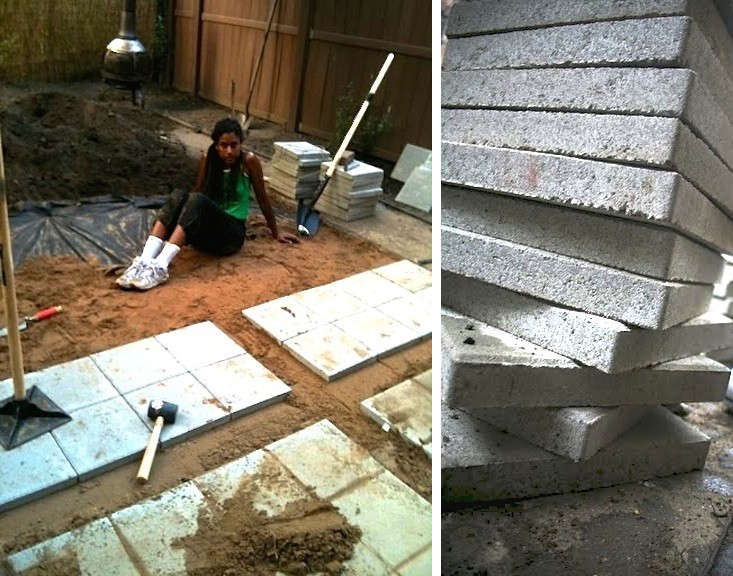 Above: For the new patio, Clarke (L) and Bascom set concrete pavers in sand. They varied the width of the grout lines to create blocks of pavers for a checkerboard effect. 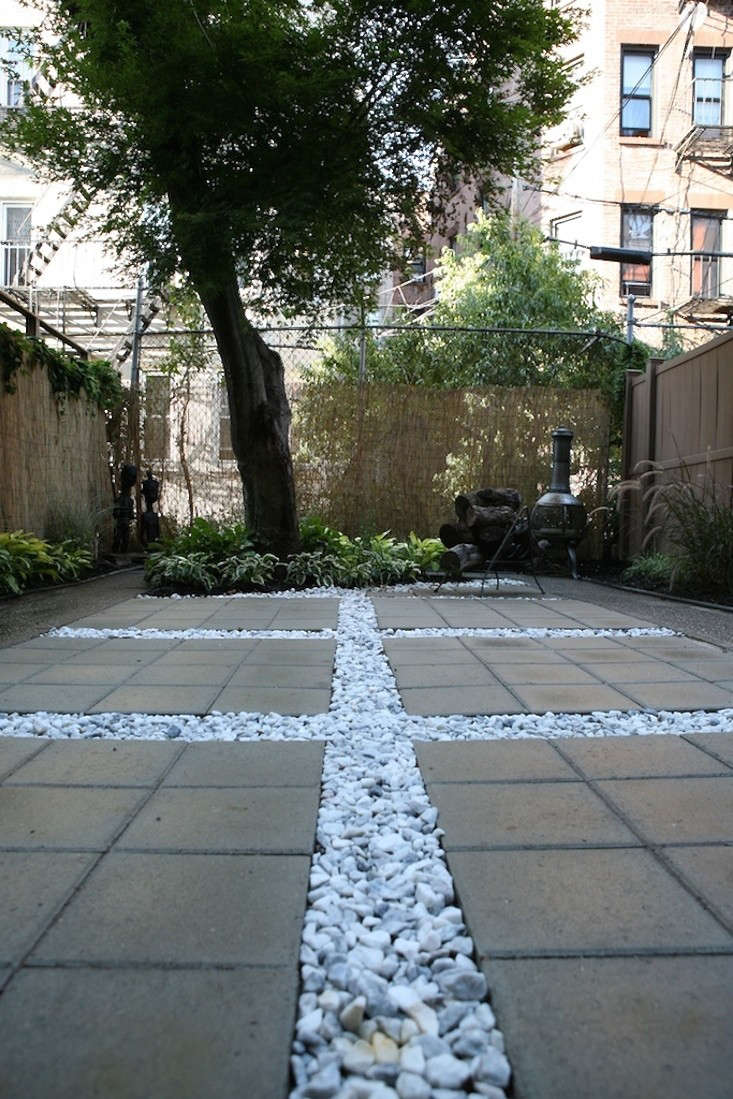 Above: “We used white stones between the pavers because the color created a nice pop,” says Clarke. In the dappled shade beneath the Japanese maple tree, “black or a natural color stone wouldn’t have the same effect.” 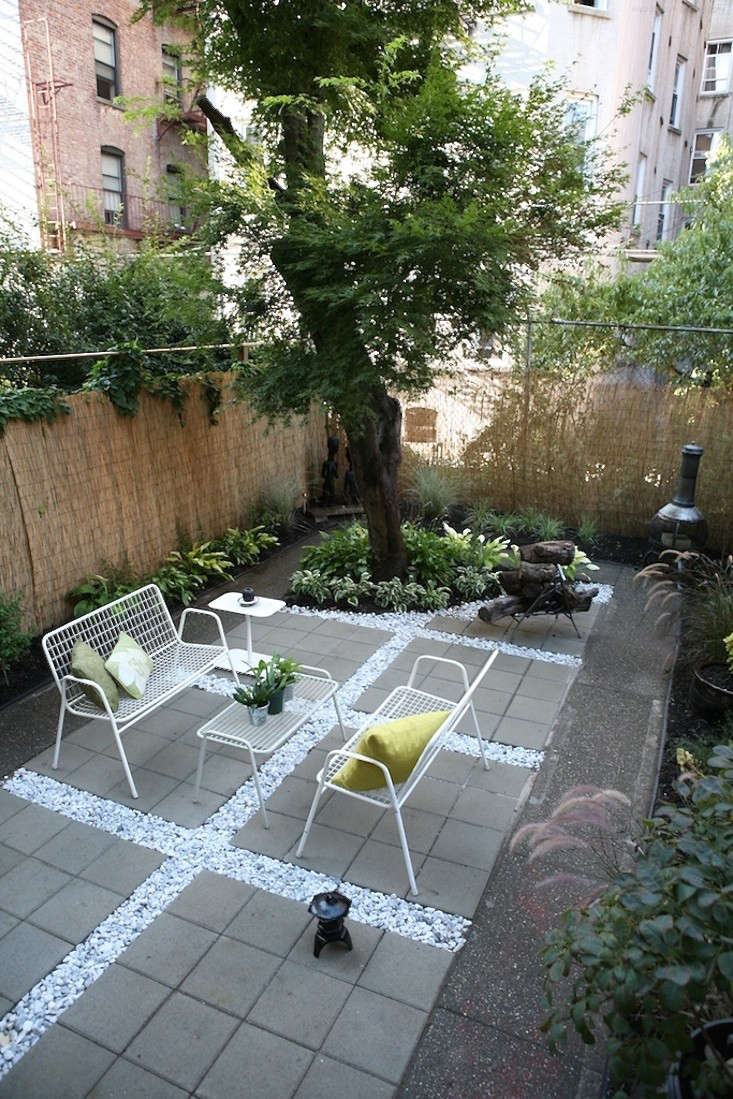 Above: Vintage metal garden furniture painted white visually reinforces the brightness of the white stones in the patio. “The furniture is super lightweight and easily moved,” says Clarke. “It also looks airy because it’s wire.”

The designers installed a rolled bamboo fence. “Bamboo is a very affordable option and very organic. It allows air and light to travel through, so it keeps the garden light and cool,” says Clarke. 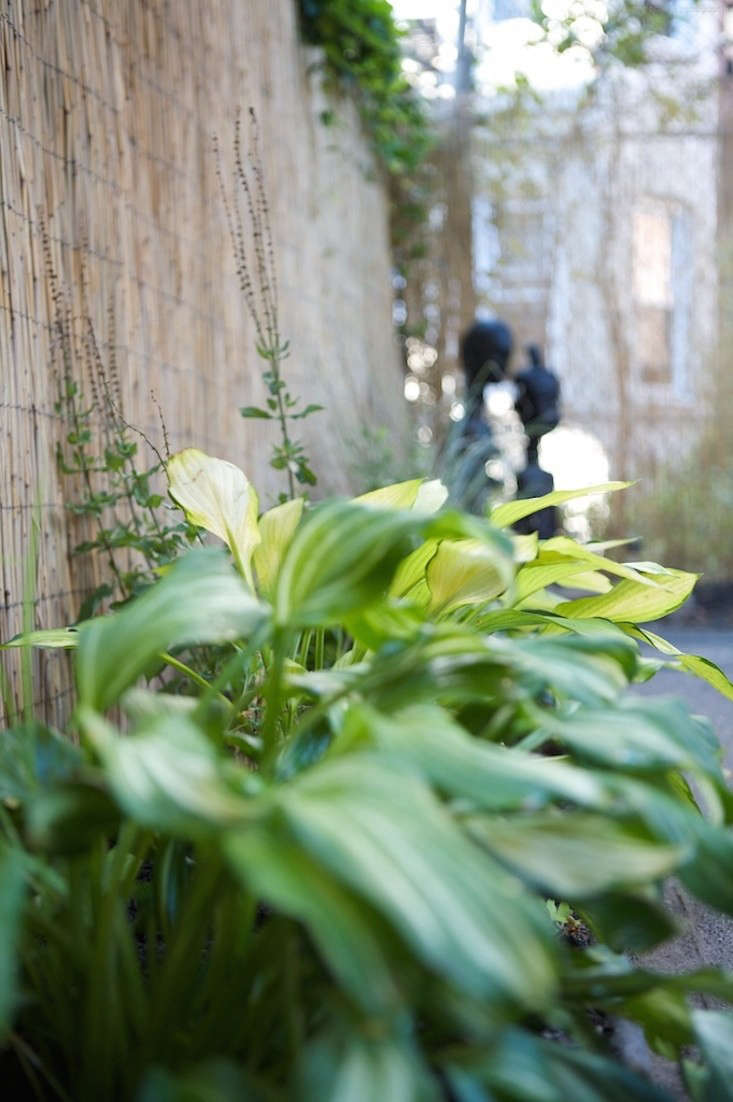 Above: When Clarke and Bascom first saw the garden, clumps of hostas were thriving beneath the tree. They added more hostas with different shapes and colors of leaves along the fence line. “We liked the idea of using more hostas to make the space more minimal and uniform,” says Clarke. 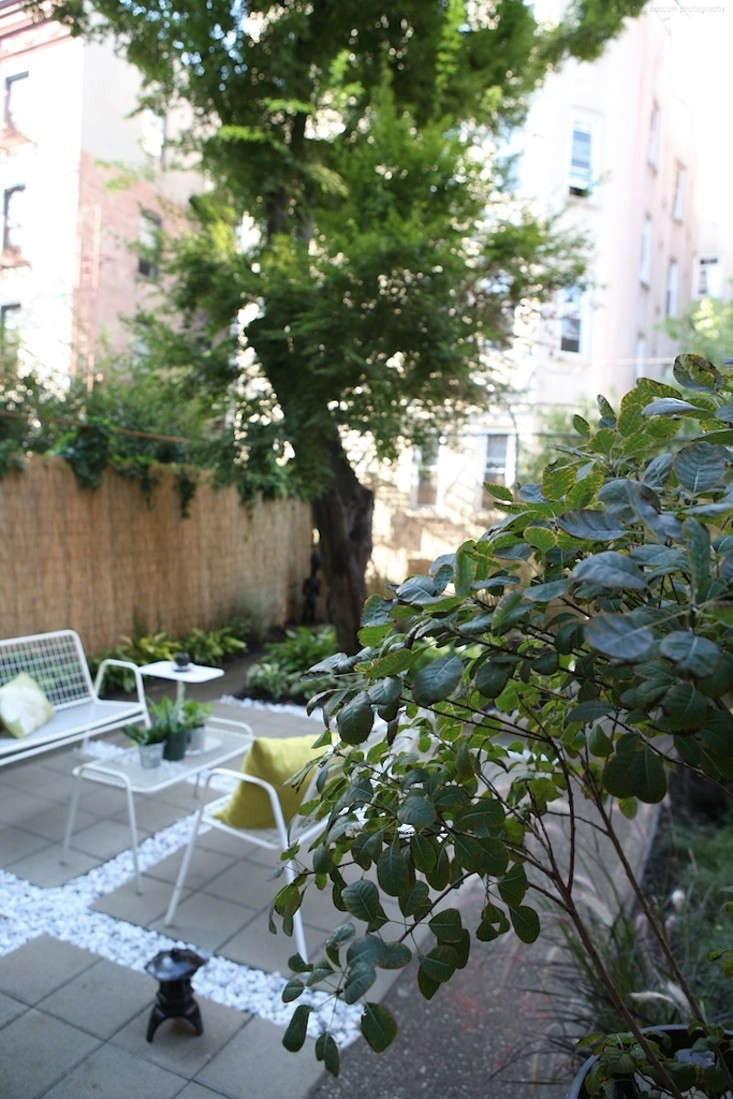 Above: In the foreground is a smoke tree shrub that Bascom and Clarke planted in an old pickle barrel. 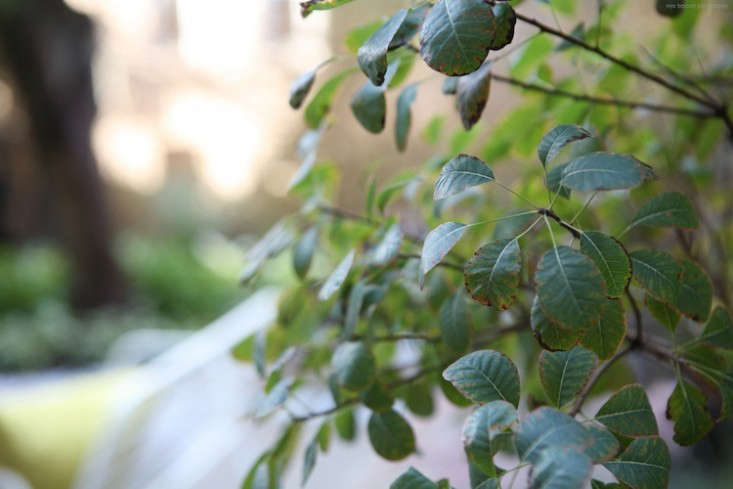 Above: “The barrel will limit the smoke tree’s growth, but it’s been doing really well,” says Clarke. “We put the smoke tree there because we wanted something full in the corner and we didn’t want to add more trees to the small space.” 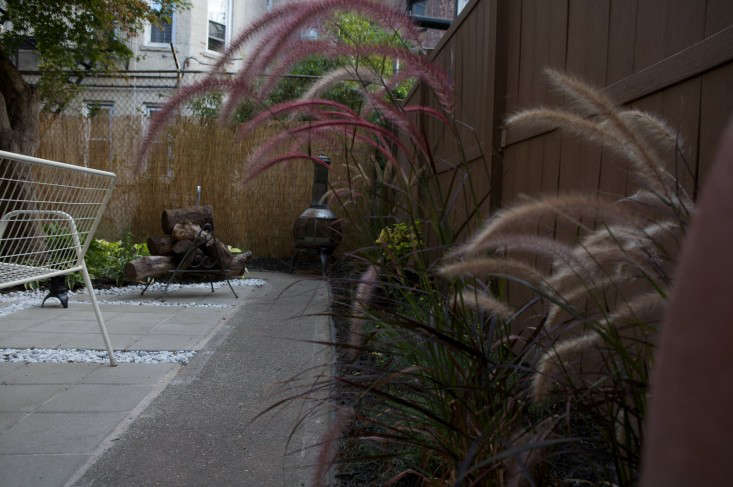 Above: The old poured-concrete path frames the new patio. 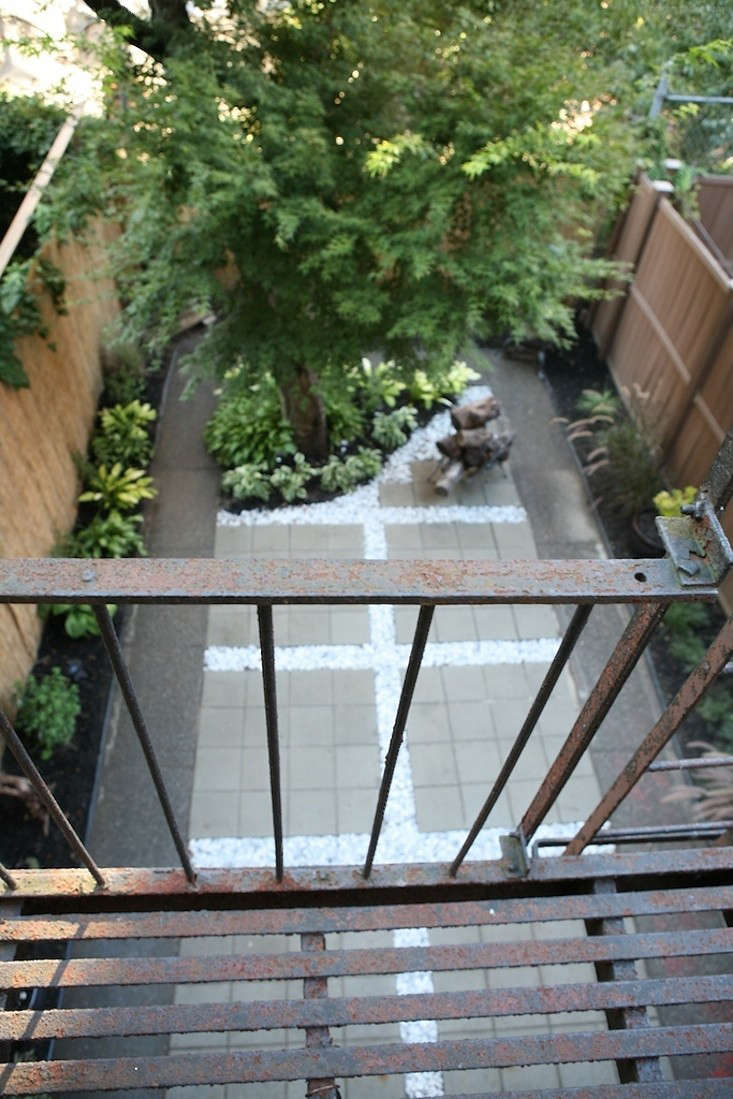 Above: An aerial view of the garden, from the fire escape.

Table of Contents: Before and After