When Alison Cayne moved into her townhouse in New York City’s West Village in 2012, she was happy with all the outdoor space she was getting. She loved the broad terrace on the second floor, just outside the master bedroom, and a similar terrace on the fourth floor. And the backyard seemed just great, with its raised platform at the back that “looked like a little stage.”

But Cayne soon realized the backyard had its drawbacks. The raised area took up a lot of space, making it difficult to entertain big groups–something Cayne, the founder of Haven’s Kitchen, a cooking school, café, and event space in Chelsea, does often.

What’s more, her younger son (now 10) found that the slate flagstones underfoot played havoc with his basketball game. A freshly completed overhaul has solved both those problems:

Photography by Douglas Lyle Thompson, except where noted. 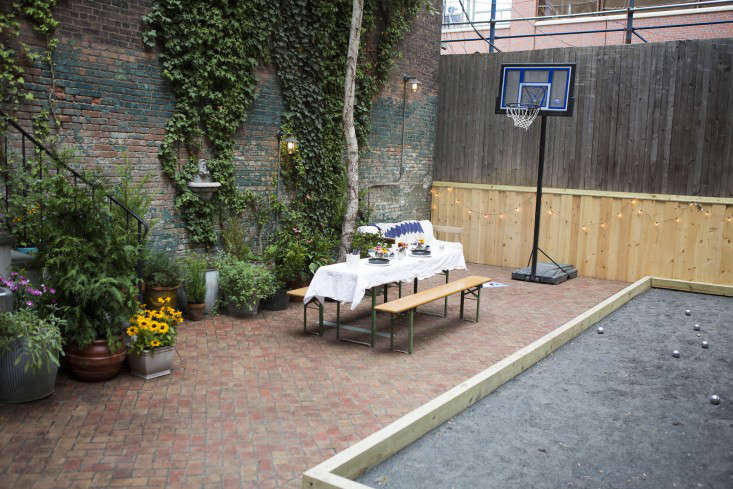 Above: The backyard’s new look. Two days after the job was done, Cayne had a dinner for 45 in support of the FEED Foundation. The basketball hoop is easily wheeled out of the way for parties; otherwise, it sees a lot of use. That court on the right? Read on. 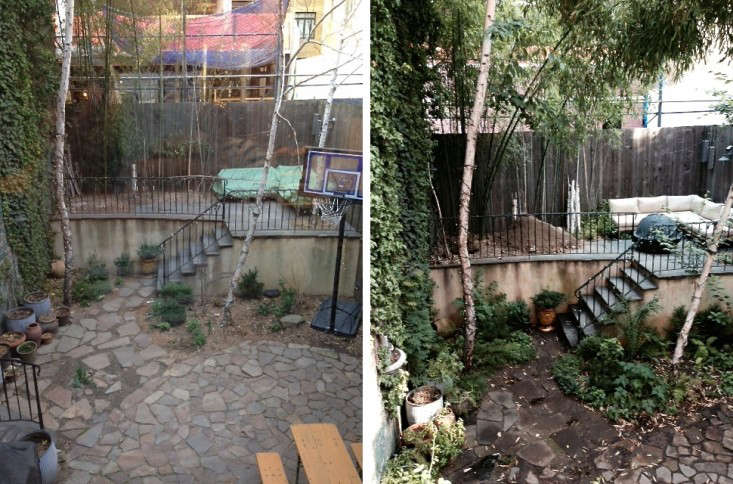 Above: Photographs by Ali Cayne.

Two seasonal views of the backyard before renovation. The space was fine for Cayne and her five kids, but not suited to larger gatherings–or basketball. 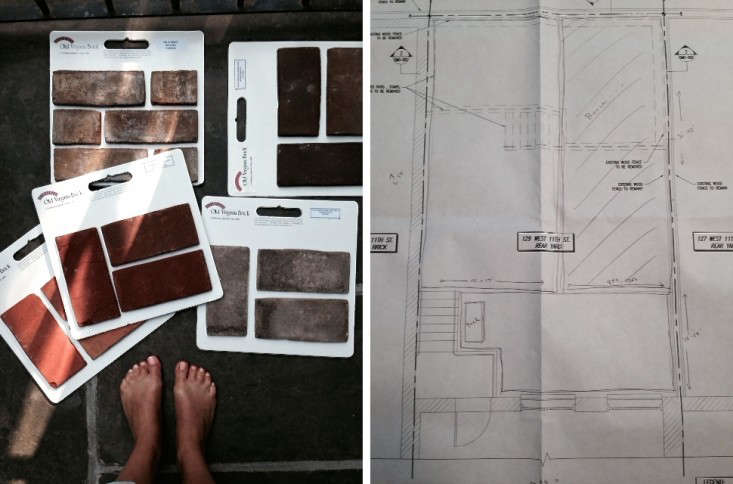 Above: (from left) Contemplating brick choices; the plan drawn up by Twin Stone Restoration, a Brooklyn-based contractor. Photograph by Ali Cayne. 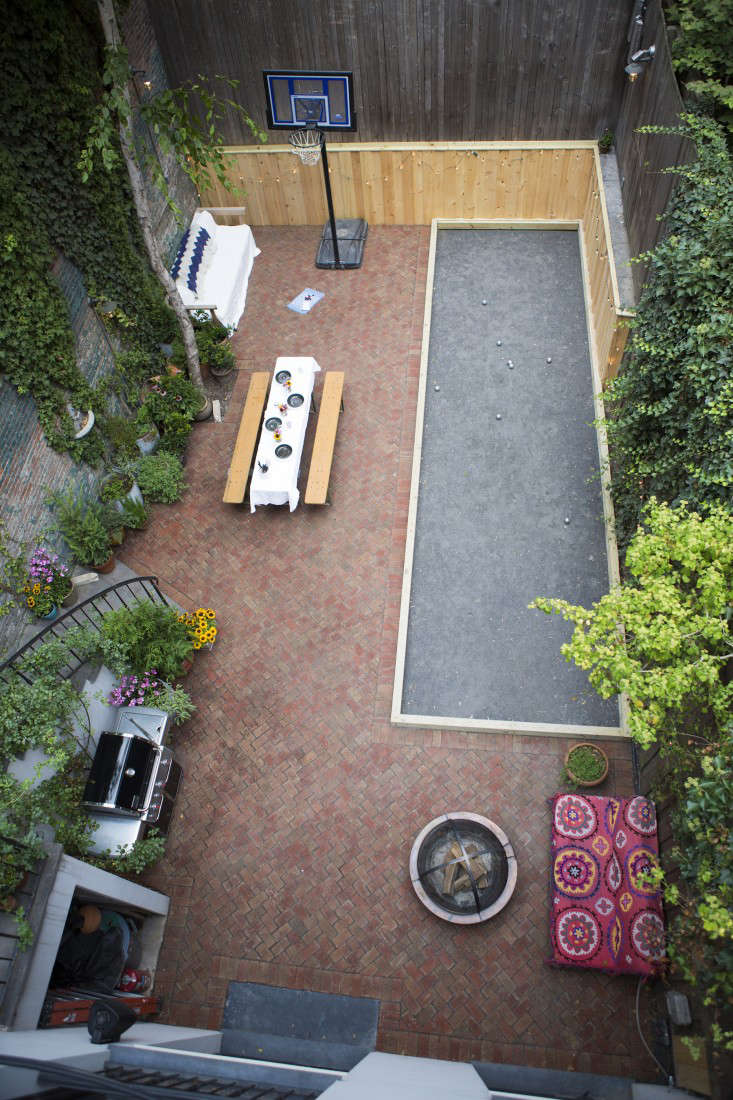 Above: The completed backyard, as seen from the second-floor terrace. The job took only a month; removing excess soil and debris from the back proved to be the biggest challenge.

Brick in a herringbone pattern provides a smoother surface for basketball. The clay court at right is for playing boules, a French game that Cayne loves. “I usually call it “˜boccie’ because that sounds less pretentious,” she says jokingly, “and more people know the name.” There is a difference: The Italian game of boccie is similar to bowling, whereas boules (also called petanque) resembles horseshoes, but is played with heavy metal balls.

Above: The back stairs lead down from the townhouse’s open kitchen. The ground floor houses a ping-pong table and a pet rabbit, who’s allowed to wander the yard when supervised. 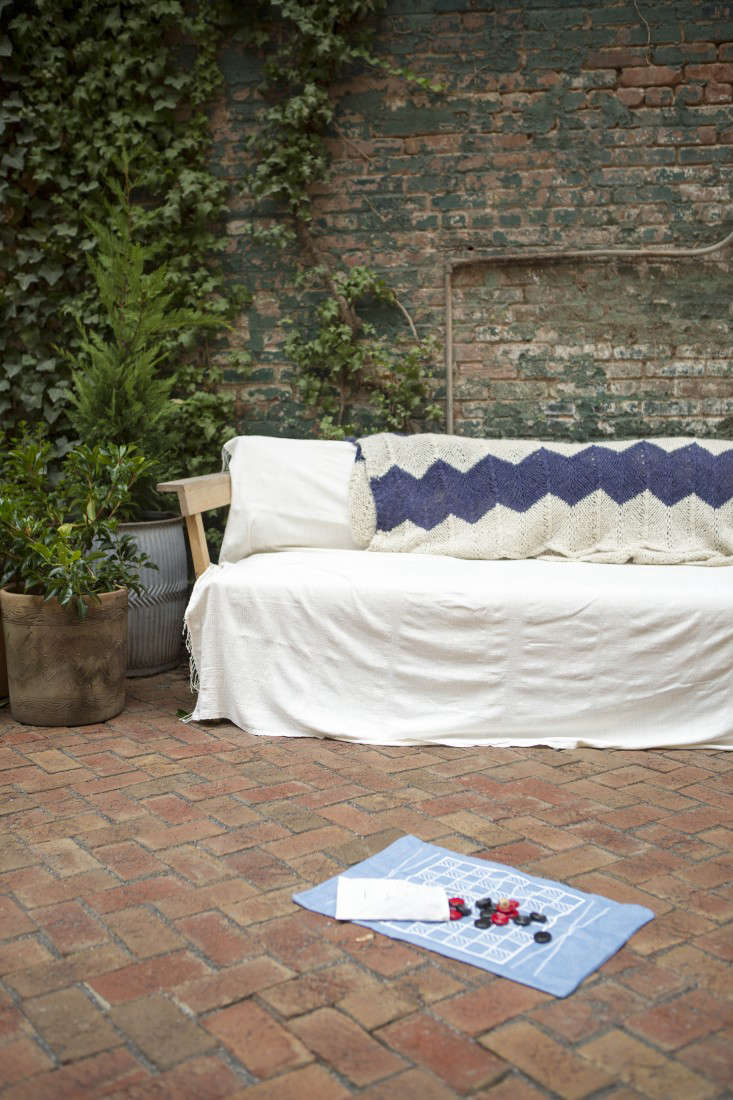 Above: A reading corner at the rear. The couches are covered in neutral-colored outdoor fabric; Cayne tosses throws over them when guests are coming. 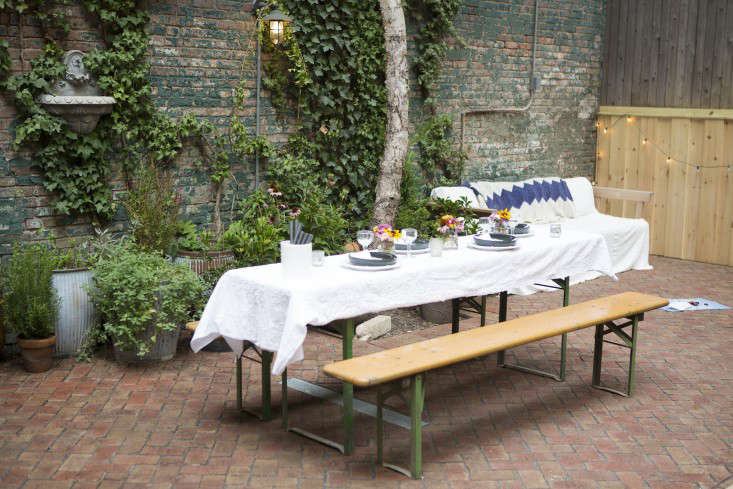 Above: In warm weather, Cayne and the kids eat outside whenever they can. The lightweight picnic table and benches are easily moved to wherever they’re needed for a meal. 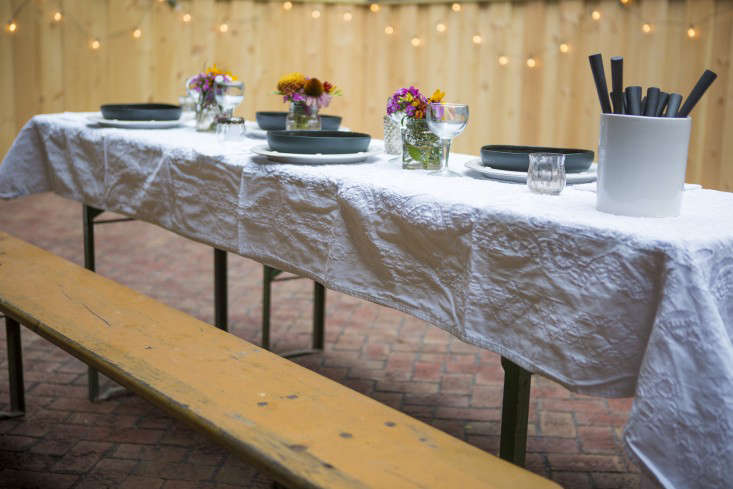 Above: Flowers on the table came from the backyard’s planters. The yard’s old fencing was left in place; a new section will soon weather to match it. 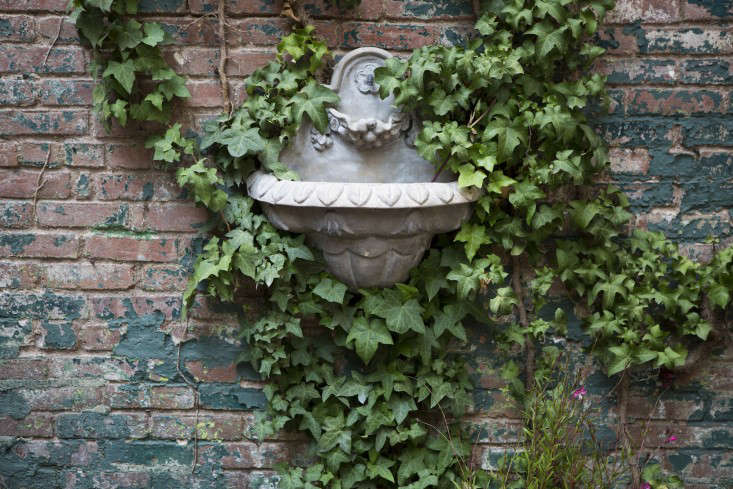 Above: This wall-mounted stone fountain (and the ivy) came with the house. Even without water, Cayne likes it just as it is. 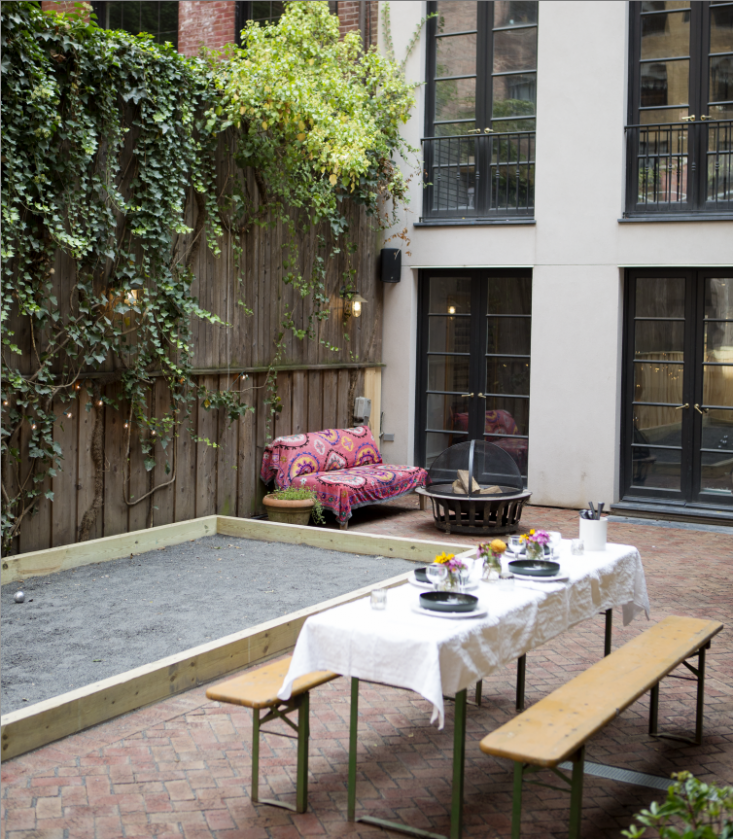 Above: An embroidered Indian fabric lends color to a couch. The backyard fire pit is frequently pressed into use for roasting after-dinner s’mores with the kids. 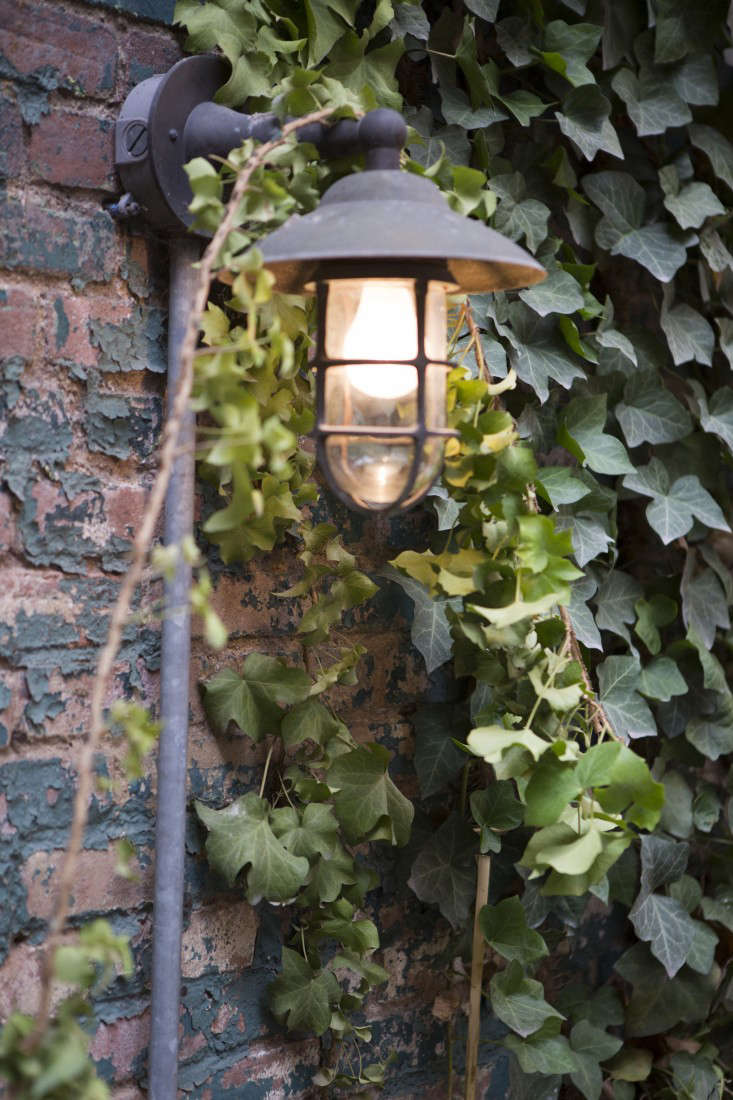 Above: Wharf lights along the walls illuminate evening get-togethers. 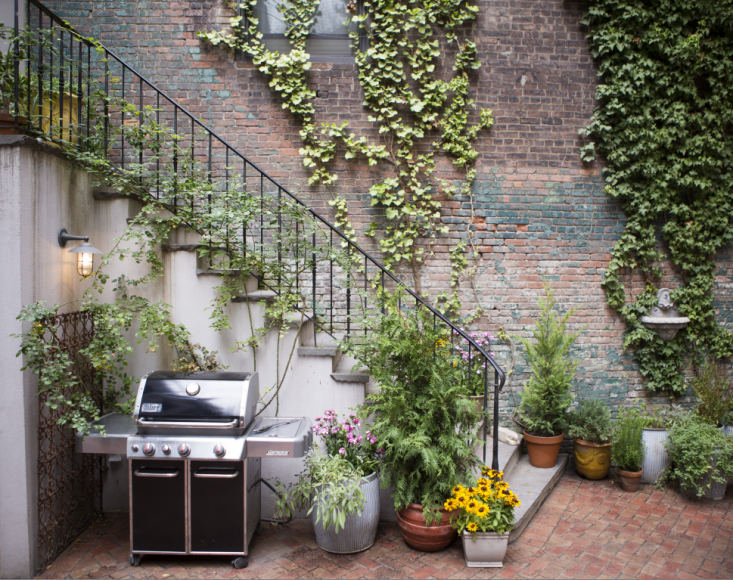 Above: An accomplished griller who has always enjoyed cooking, Cayne fixes family meals on the Weber almost every night. 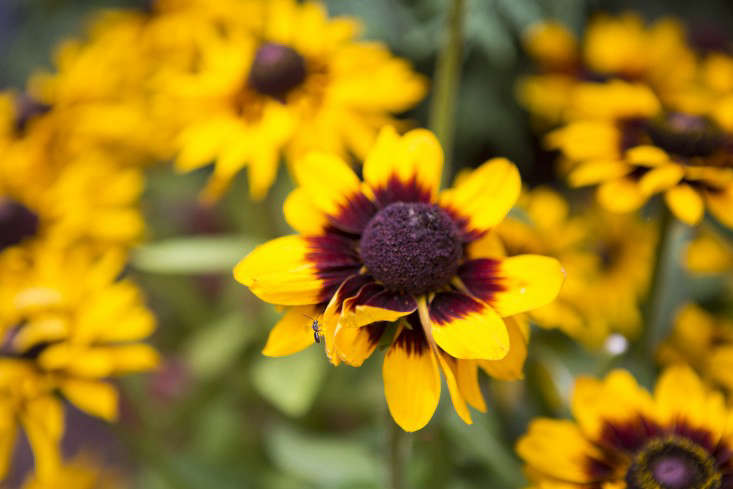 Above: The yellow terra cotta urn at the top of the stairs was a gift from a friend’s parents, owners of the garden design center Eye of the Day, in Carpinteria, CA. 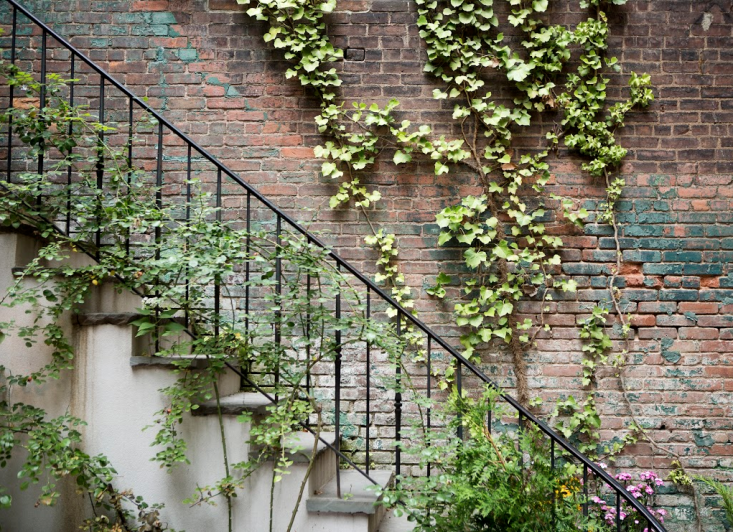 Above: No perfectionist, Cayne revels in the backyard’s “hodge-podgy” look, saying, “I didn’t want it to look prissy.” The peeling paint on the brick wall looks much as it did when the family moved in. 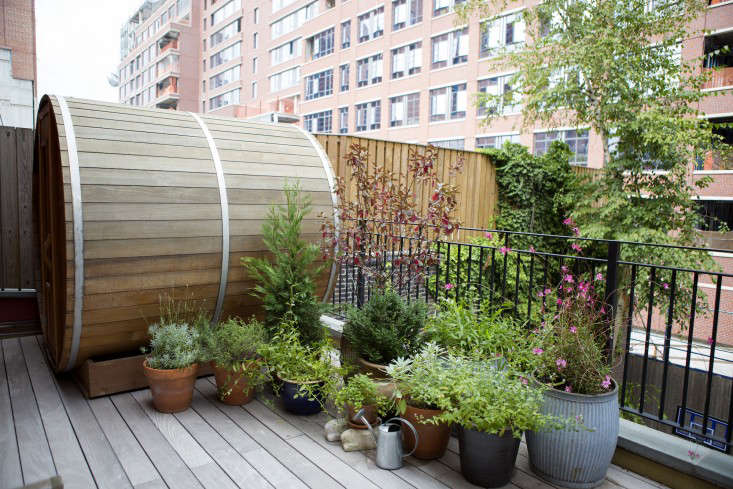 Above: On the second-floor terrace outside the master bedroom, potted herbs, shrubs, and flowers flank an outdoor barrel sauna that came in a DIY kit from Northern Lights, a Belgian company with a branch in Winnipeg, Manitoba. 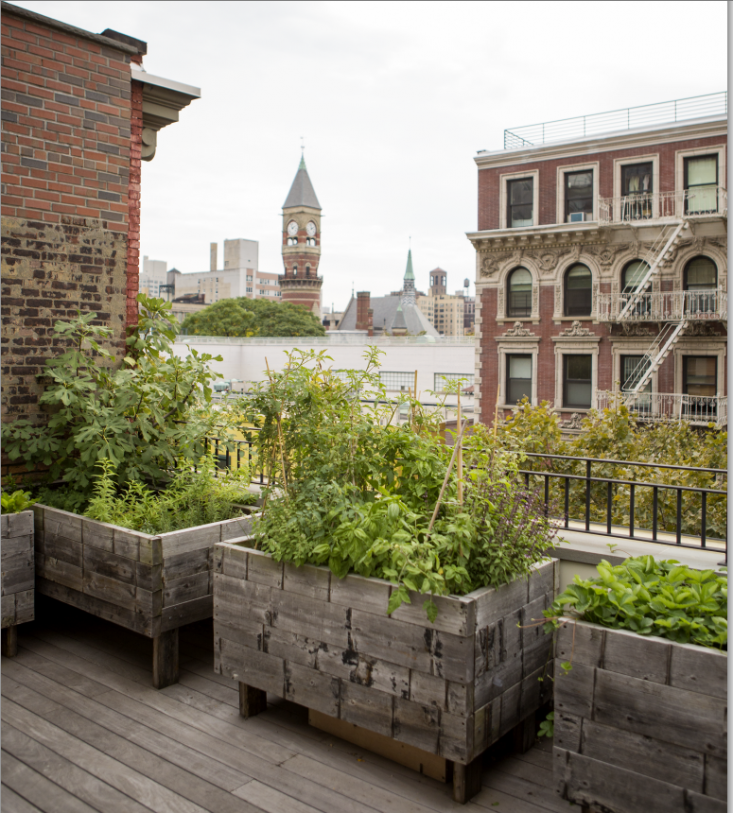 Above: The terrace off the fourth floor, where Cayne’s two sons have bedrooms, has a stunning view of the landmark Jefferson Market Library, with its Gothic clock tower. (The building, originally a courthouse, was completed in 1877.) “Vegetables really love growing here,” she says, noting that the terrace seems to have its own micro-climate. 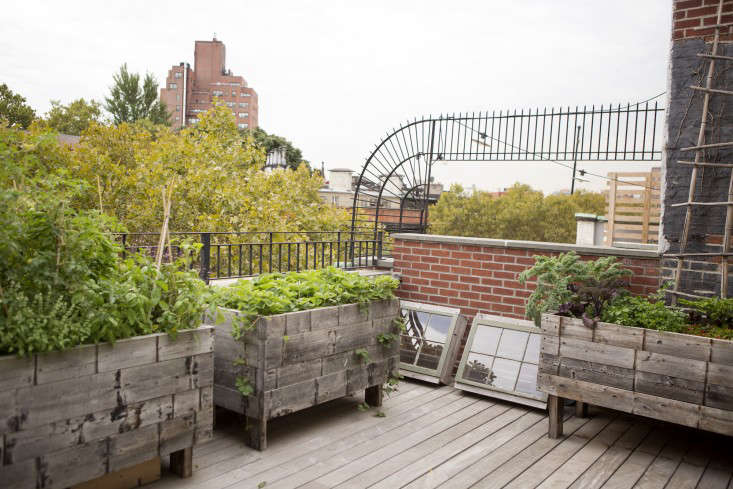 Above: The sturdy, self-irrigating planters were constructed and installed by Brooklyn Grange, a rooftop farming business. Cayne and her older son made cold frames out of the windows shown here, and used them to start the seeds she ordered from Seeds of Change. The planter in the middle is dedicated to strawberry plants, the one at left is mostly basil and cherry tomatoes. “The kids are proud of the fact that we grow our own food up here,” she says. “My girls and I love to graze in the lettuce and arugula patch.” 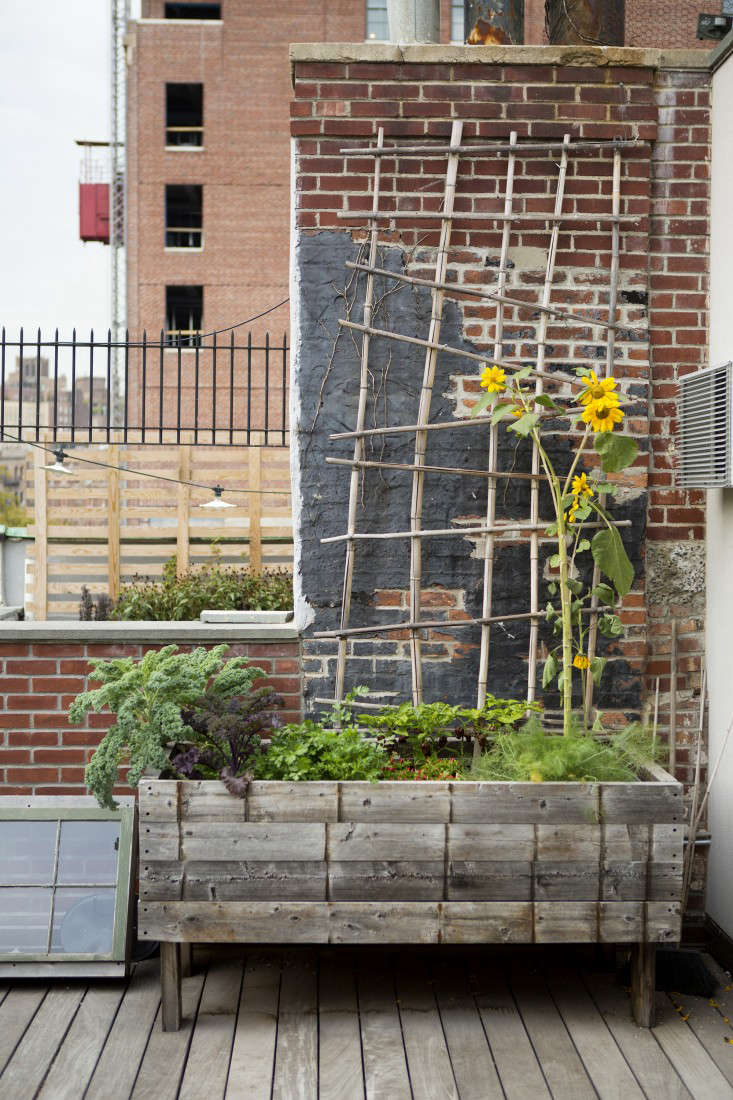 Above: A protected bed holds kale, parsley, peppers, and fennel. The bamboo trellis for the sunflowers was made with stalks salvaged from the backyard, where bamboo once ran rampant. And if you climb a ladder to see what’s on top of the building, you’ll find a roof planted with sedum.

Inspired by the Before and Afters? Find more posts here.

Trending on Remodelista: How to Use Color