In the strange way that past events can suddenly become relevant and influential in the present, a filmmaker’s groundbreaking achievement 44 years ago helped to propel a Brooklyn block to the winning spot in this year’s Greenest Block Contest.

For nine years, the residents of Sterling Street between Washington and Bedford Avenues in the historic Prospect-Lefferts Gardens neighborhood had entered the contest without taking the top spot.  This year they stepped up their game.  And to raise much needed funds, they called on the special talent of one of their own.  They held a screening of documentarian and block resident Madeline Anderson’s 1969 film I Am Somebody and charged a $15 admission fee.

The money they made was used by the block’s gardening committee to buy plants, window boxes, and whiskey barrel containers.  The plants were sold at a discount or planted in the window boxes which were given away to each household. The whiskey barrels, which the committee purchased for $30 apiece, were sold to residents for $20.  Buyers were required to plant and maintain the barrels. 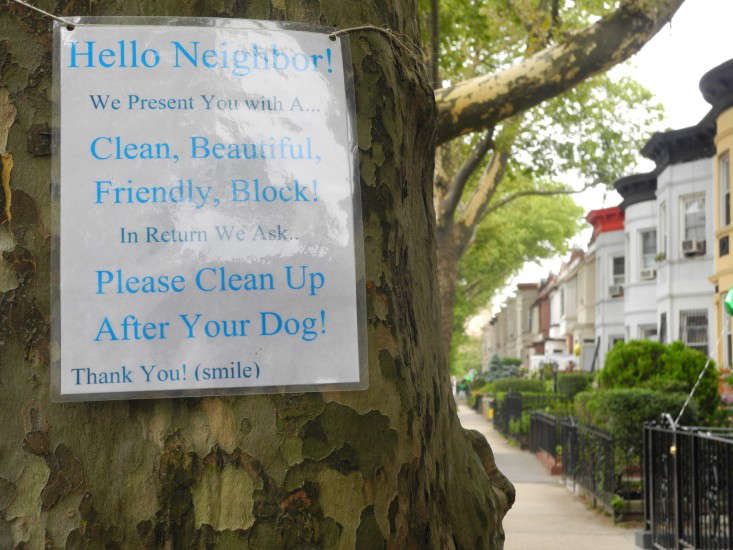 The Sterling Street block is lined with burly London plane trees on one side, where the homes tend to be older, limestone barrel-fronted townhouses for the most part.  Across the street, the trees are younger and the houses, attached brick homes, are newer.  But when you stand at one end and look down the block, it is verdant and cohesive.

The barrels on the sidewalks are spilling over with coleus, zinnias, potato vines, and statuesque cannas.  Numerous varieties of native plants are everywhere. While each home seems to have a different style of gardening, somehow the fact that every household has made an effort to green up their property has resulted in one lush garden zone.

It is an extremely impressive effort and one that required a lot of hard work, creative thinking, and diplomatic persuasion.  According to Claudia Loftis, who heads the 10-member gardening committee, one element of success was eliminating barriers.

Neighbors were encouraged to pitch in and lend a hand wherever help was needed, not just on their own property.  Loftis herself was a beneficiary of the policy.  A neighbor came over and trimmed her hedge because she doesn’t own pruners.

She also credited a vigorous communication campaign.  Tip sheets from the Brooklyn Botanic Garden, which manages the contest, were copied and placed under everyone’s door.  Residents were alerted to block-wide efforts, such as sprucing up tree beds and mulching the front yard of an empty home.  A children’s garden was created by kids on the block with guidance from adults.  It has been so successful that the block plans to repeat the effort next year and add an edible children’s garden as well.

Carmen Martinez, president of the B & W Sterling Street Block Association, credits the contest effort with bringing neighbors together and building pride in the neighborhood.  She estimates there are more than 60 households on the block, and she proudly notes this year they have 100 percent membership in the block association. She said she was not really a gardener herself but seeing such enthusiastic work going on around her inspired her to give it a try, especially after she saw a neighbor sweeping her property at midnight.

As for the film that financed this year’s winning effort, I Am Somebody is coming up a winner this summer also. It recounts the struggle of 400 black female hospital workers in the 1960s who struck for higher wages in Charleston, SC.   Later this month it will be screened at the Brooklyn Academy of Music, along with some other of Madeline Anderson’s films.  They are part of BAM’s retrospective of the cinema of the civil rights movement.

For a comprehensive list of all of this year’s Brooklyn’s Greenest Block winners, go to the BBG website.

To read more about the Brooklyn’s Greenest Block Contest and last year’s winners, check out these posts: The Most Beautiful Block in Brooklyn and The Best of Brooklyn:  The Winner Is…

Indoor Gardening 101: How to Overwinter Plants Inside