Ginkgos are surprising trees, eulogized in art while busy inhaling fumes in American cities. Their elegance becomes truly apparent when the leaves drop. Another thing: they are literally bombproof.

Two ginkgo leaves against a white background, one yellow leaf carefully laid over green: this was the cover of Passage, Irving Penn’s collection of photographs from 1991. I thought the leaves on the cover were the most elegant things I’d ever seen, though Irving Penn could make a pile of cigarette butts look beautiful.

Never having noticed a ginkgo before, I started to see its soft pie-chart leaves in the landscape. I was living in New York City where ginkgo trees were street trees: not so rarefied after all. Wrong again. 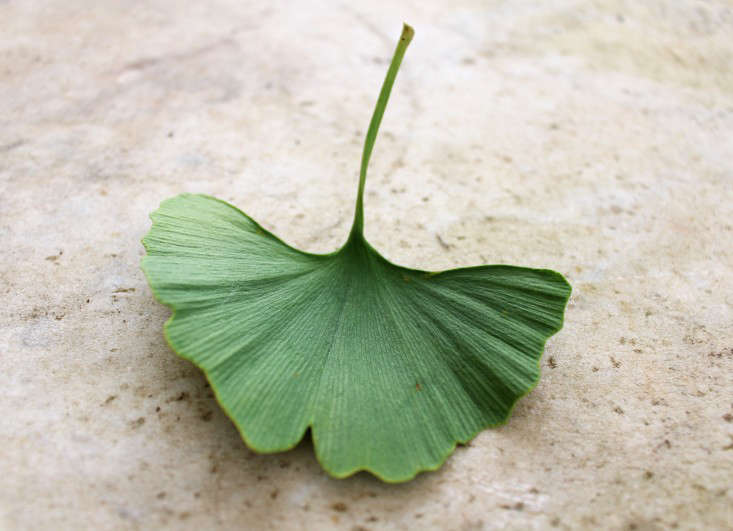 Above: The only place in the world that the ginkgo (sometimes known as the Maidenhair tree) grows wild is in two small areas of central China. It is a living fossil, a survivor of the early Jurassic age. In a class all its own, ginkgo has no known relations. Photograph by Kendra Wilson.

With multiple leaves clustering from single spurs, the ginkgo is complemented by the tree fern and is often planted with its ancient friend. Ginkgo and fern both evolved before the dawn of flowering plants.

Above: The ginkgo nut, at the heart of the seed pod, is eaten as a delicacy in China. The fleshy exterior, however, makes a malodorous mess when the seeds hit the ground. It is advised therefore to choose a male specimen. The reason the yellow leaves are just as often associated with the tree pits of Brooklyn is that the ginkgo is pollution-tolerant and is able to grow in cramped conditions. In an ideal world, it would appreciate good hydration and drainage.

Perhaps not surprisingly, the ginkgo is very long-lived, clocking up a thousand or even two thousand years in a lifetime. The sap that seeps from its bark is said to have fire-retarding properties and these trees have survived many an earthquake-related fire. Not forgetting–at the other extreme–the Ice Age.

Perhaps one reason the overall looks of the ginkgo are perhaps forgettable (before the leaves turn bright yellow) is that as a tree it is rather lumpy, not putting on significant side growth until it is at least 33 feet tall. Ginkgo happily grows to 100 feet and more, which is why it has thrived over the years in arboretums and large gardens, collected from the wild by plant hunters. And yes, it also makes a good bonsai.

This tall-tiny, eastern-western, rural-urban tree is listed as endangered even though it is grown all over the world. This is because of its very rare occurrance in the wild. Can we share one more fact? the only vegetation to survive the atom bomb at Hiroshima was the ginkgo, found within a couple of miles of the explosion and still thriving today.

Danish Twist: A Big House Looks Small in the Forest