Dinner parties shouldn’t be hard to throw. To prove it, I invited friends over–and then fed them an easy-to-make menu based on what’s in season right now at the farmers’ market. Best night ever. (Hint: start with a cocktail.)

It would be simply too hard to say goodbye to the sun and garden bounty of summer if autumn and its own seasonal produce didn’t follow. To welcome fall and kiss goodbye to sweet summer, I built the dinner party’s menu from Gardenista’s collection of Garden-to-Table Fall Recipes.

Home cooks, get ready. Tomorrow, we’ll be asking for your favorite fall recipes for our next dinner party. 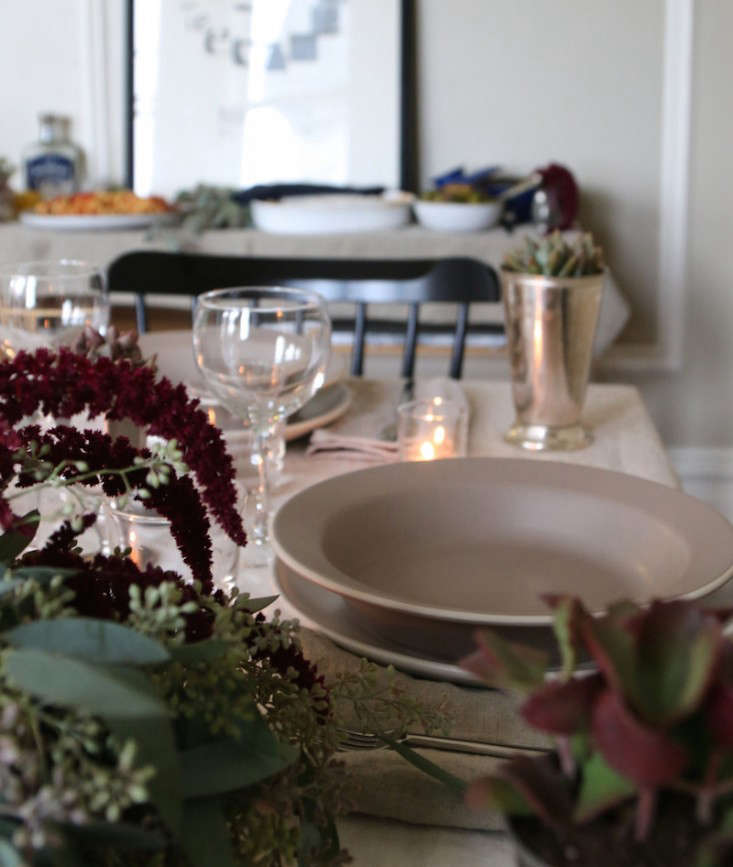 Above: Before we start cooking, a word about party preparation. Candles say, “It’s a party.” Before guests arrive, light them. Lots of them. This sets the right tone–and is more important than vacuuming, more important than music, more important than putting on mascara (in fact, the complexion-enhancing glow from candlelight will make it look as if you are wearing extremely flattering makeup).

For more on creating a mood with candlelight, see 11 Ways to Look Younger Instantly. 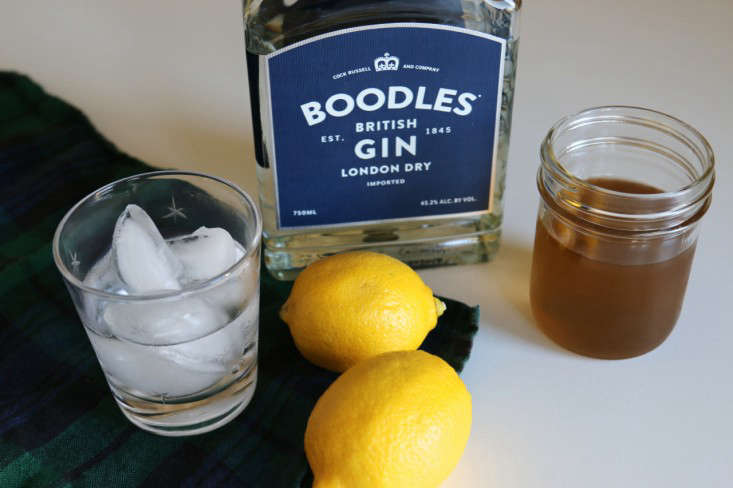 Above: Every dinner party should start with a cocktail. My pick was Hannah Kirshner’s Tom Collins recipe from Party Ideas: Cocktails and Caramel Corn. It had refreshingly few ingredients and was a breeze to make. 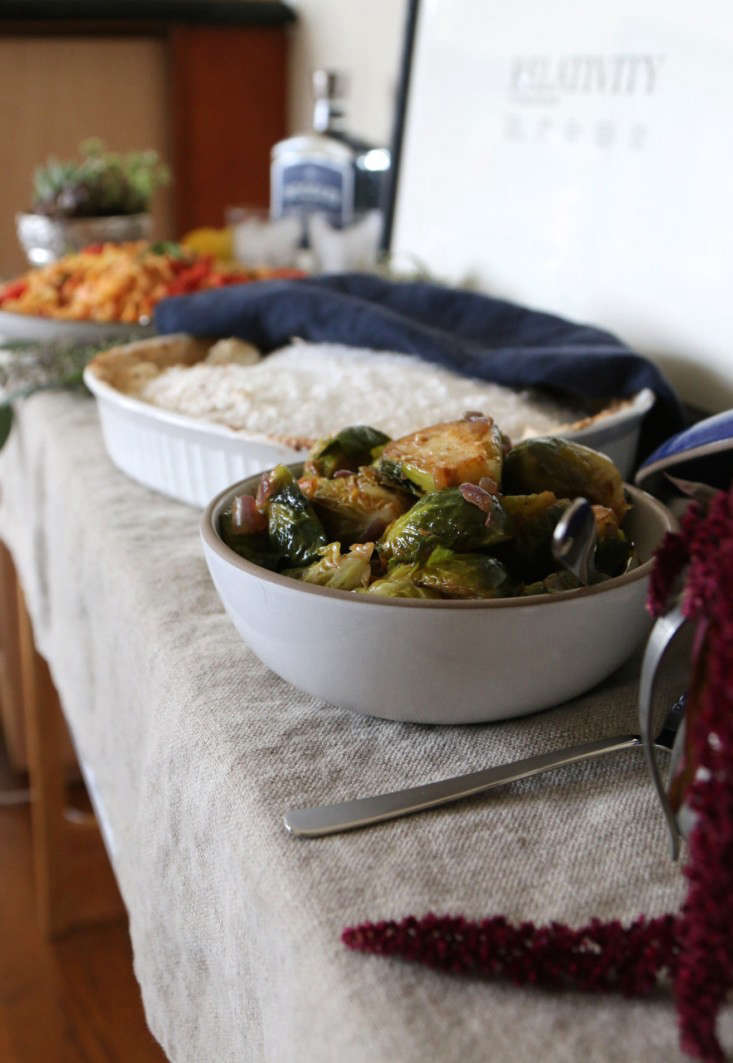 Above: Another weeknight dinner party hint is to serve the food buffet style. This also sets a tone, signaling to guests they’ve been invited to a relaxed, casual evening. And a buffet is easier for the host; you don’t have to plate the food for your guests if they serve themselves. 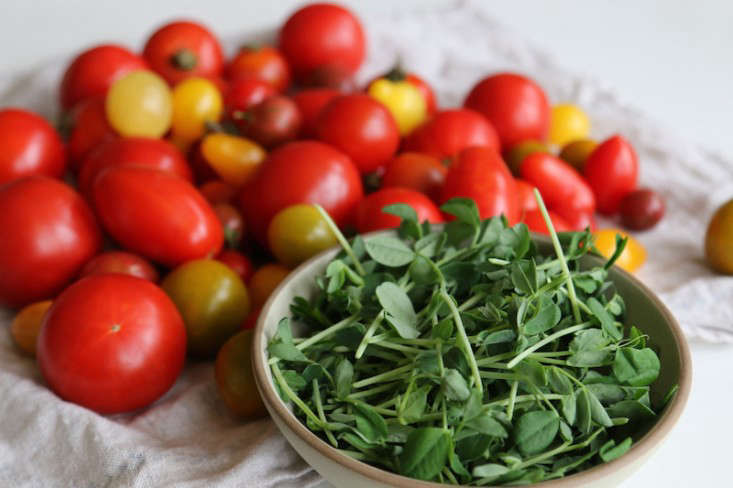 Above: Ready to cook for these people? Start by checking the refrigerator for usable leftovers (seriously). For instance, I found some homemade saffron pasta–the last of four pounds of colored pasta I recently made (see Garden-to-Table Recipe: Colorful Fresh Pasta). This gave me a head start on one dish.

I paired the pasta with end-of-summer heirloom tomatoes from Erin Boyle’s recipe for The Healthiest Spaghetti You’ll Ever Eat. (Full disclosure: I couldn’t find moringa leaves–which are the “healthiest” ingredient in the recipe’s name–so I substituted super-fresh pea shoots. Nobody complained.) 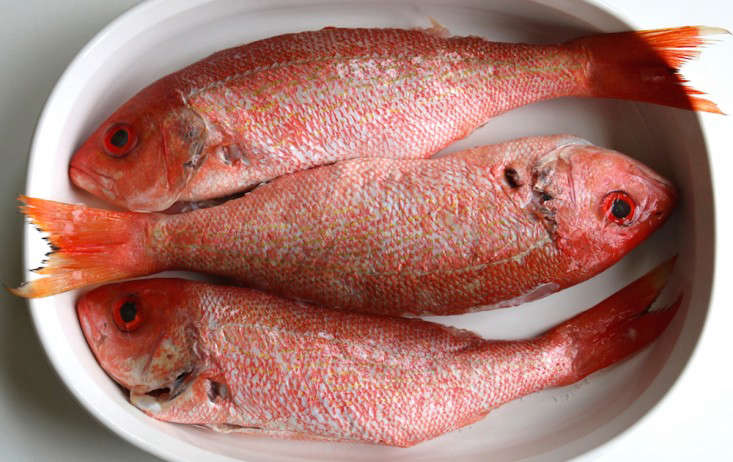 Above: For the main course, I baked three small snappers under a paste of salt and water, as suggested by Souvla restauranteur Charles Bililies in Going to the Greek: A DIY Dinner Party in San Francisco. (Had I a grill, I would have followed the instructions in The Secret to Perfect Grilled Fish for some end-of-summer outdoor cooking.) 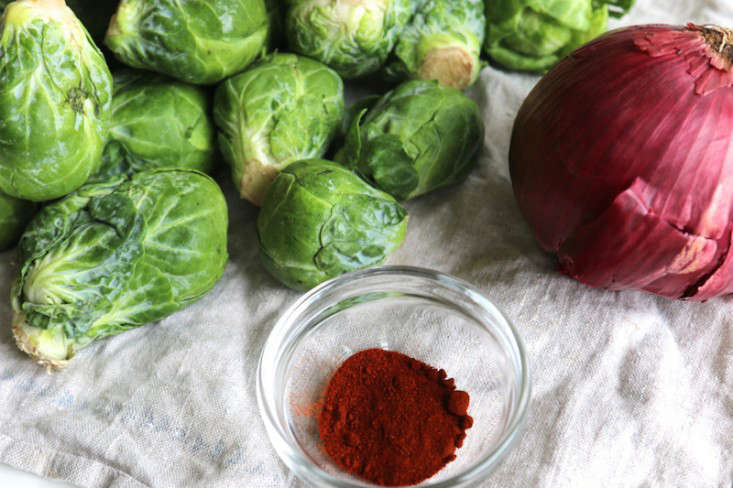 Above: As a side dish, I made Mollie Katzen’s Smoky Brussels Sprouts and Onion recipe from her new book, The Heart of the Plate. (Cooking this inspired me to add The Moosewood Cookbook: 40th Anniversary Edition to my wish list; it’s out in October. And yes, I already know I will be reviewing it favorably.)

Above: For dessert, I made Olivia Rae James’s very September-y Apple Coconut Crisp. 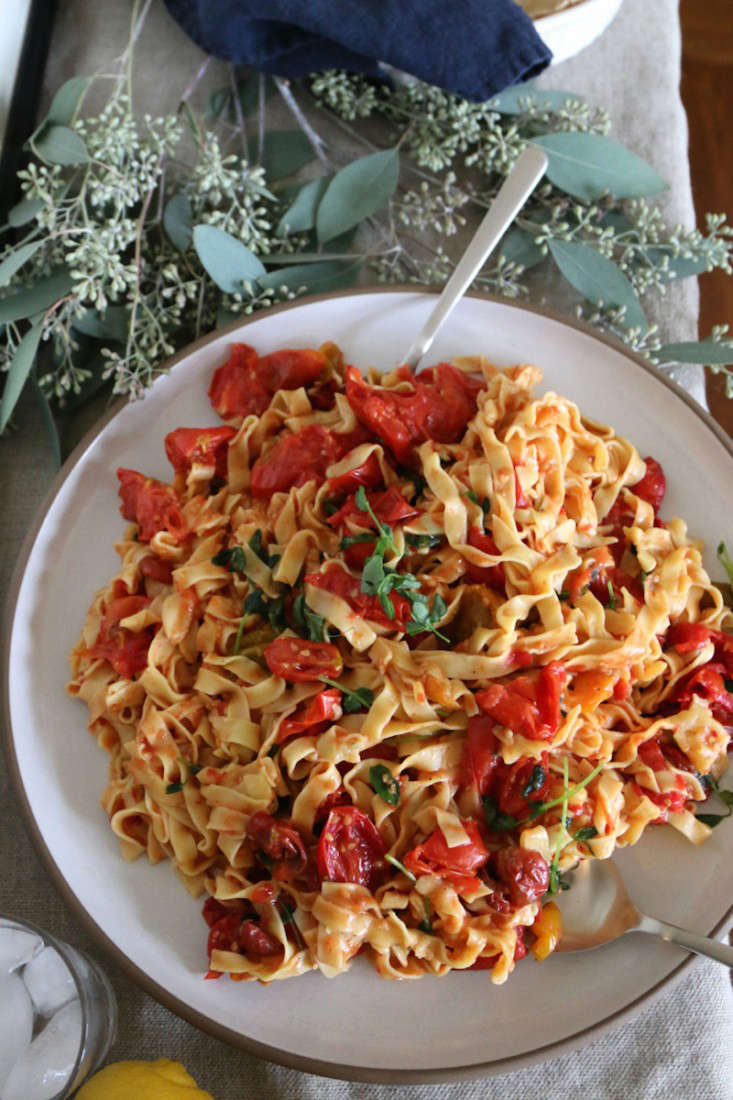 Above: The pasta sauce called for slow-roasting the tomatoes at 200 degrees for two hours. This made the most of their summer flavor. 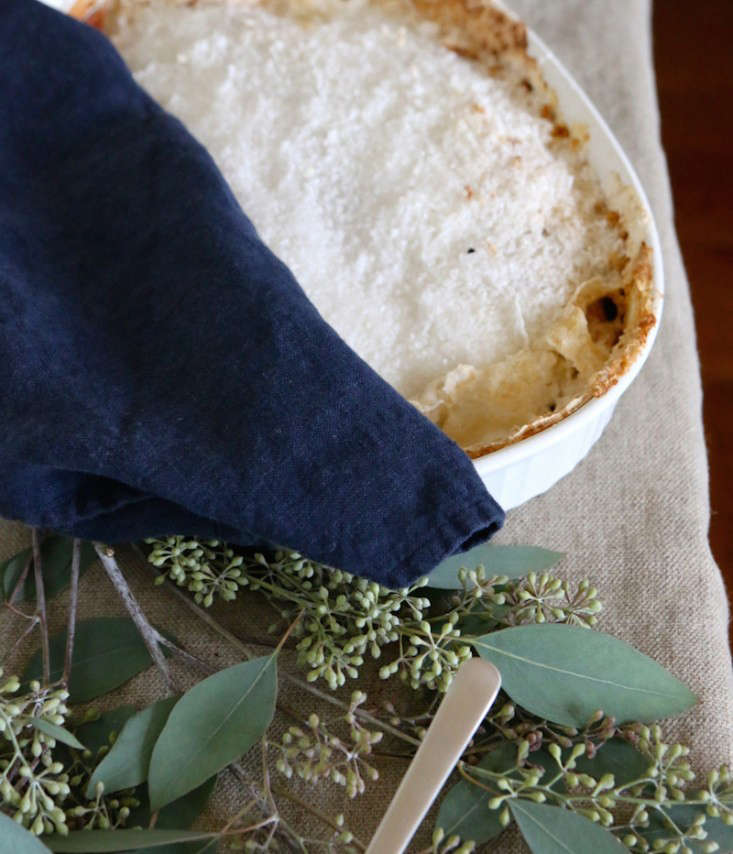 Above: The salt-baked snapper was a hit–tender and moist. But next time I bake a fish in salt, I’ll use a single large fish instead of several small ones; the fish absorbed the salt, and the thin layer of flesh was too salty. I think a thicker flesh would have helped.

(A friend suggested that it’s critical to serve salt-baked fish as soon as it’s out of the oven, when the salt still adheres to the skin. I let mine sit and cool before serving, allowing the fish to absorb even more salt.) 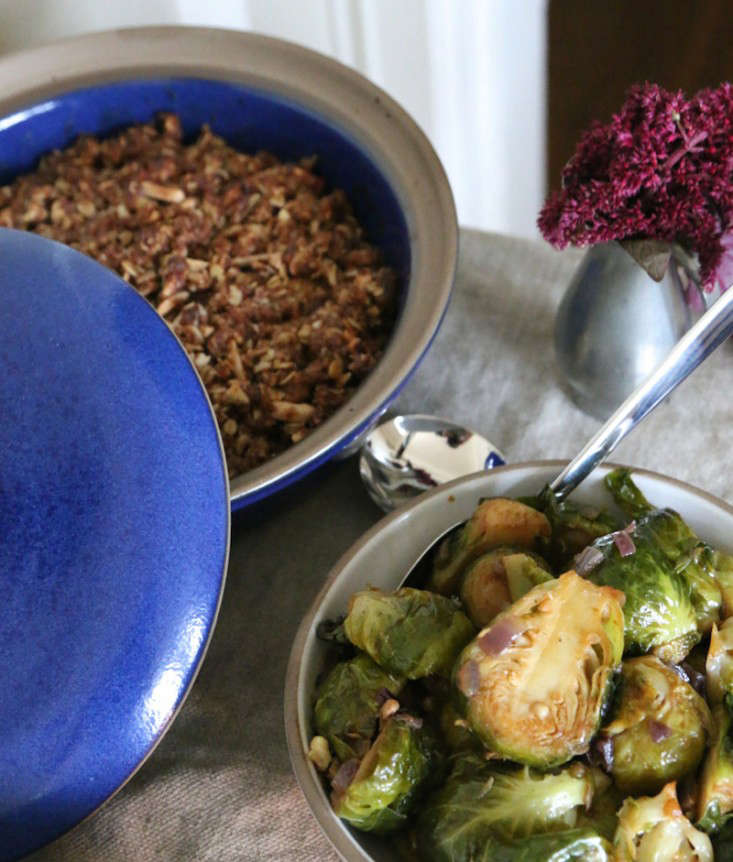 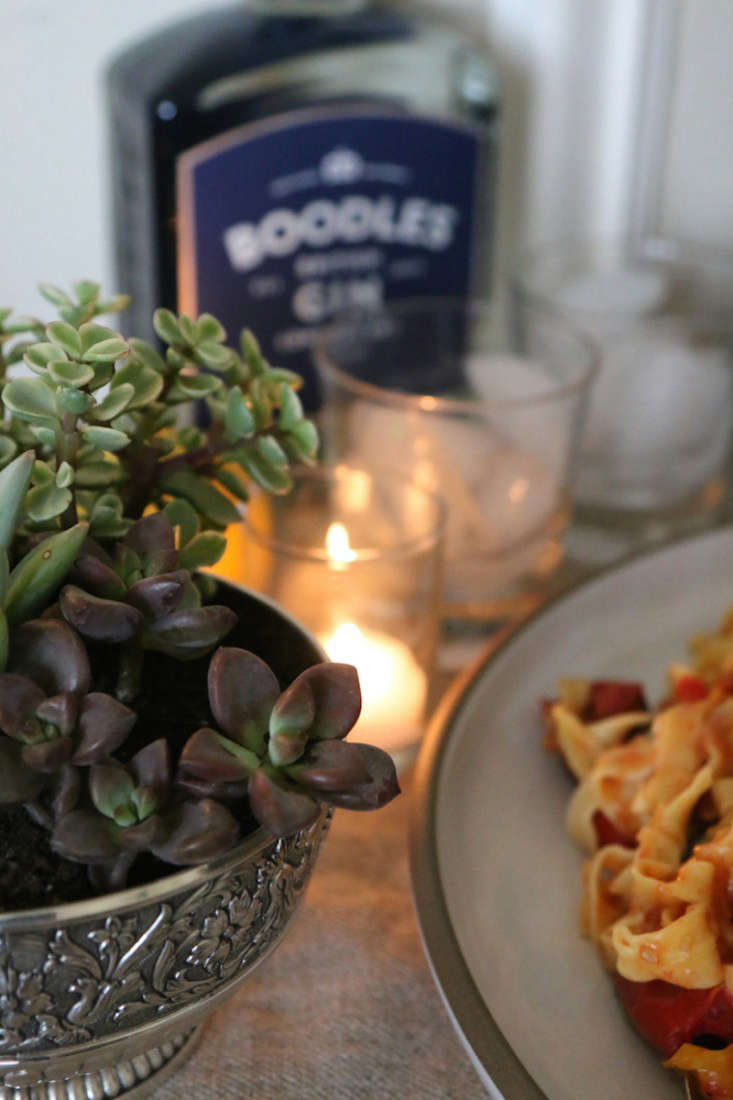 Above: I admit I’d never had a Tom Collins before, despite the drink’s fame. It was the perfect start to the evening: refreshing gin and lemon made slightly sweet.

Start poring through your recipe files: tomorrow, we’ll be seeking reader recipes for our next dinner party.

Steal some dinner party inspiration from The Ultimate Open-Air Dinner Party: A Floating Pallet Under the Stars, A Guide to Intimate Gatherings from the CAMP Workshops, and Steal This Look: Dry Garden Tablescape from Local Milk.

The Heart of the Plate