Since November, we’ve been following the adventures of bride-to-be Tara Douglass, a Brooklyn floral designer whose desire to grow her own wedding flowers was so strong that she traveled last fall to Columbia, Missouri to plant 4,325 bulbs. With a plan for a spring wedding at her grandmother’s house, she planted the bulbs and … crossed her fingers.

Months later the big day arrived. May 3 turned out to be exactly the kind you would order for your own wedding if you could: it was sunny, and the temperature was a balmy 72 degrees. How did Tara’s home-grown wedding flowers turn out? Read on:

Photography by Scott Patrick Myers except where noted. 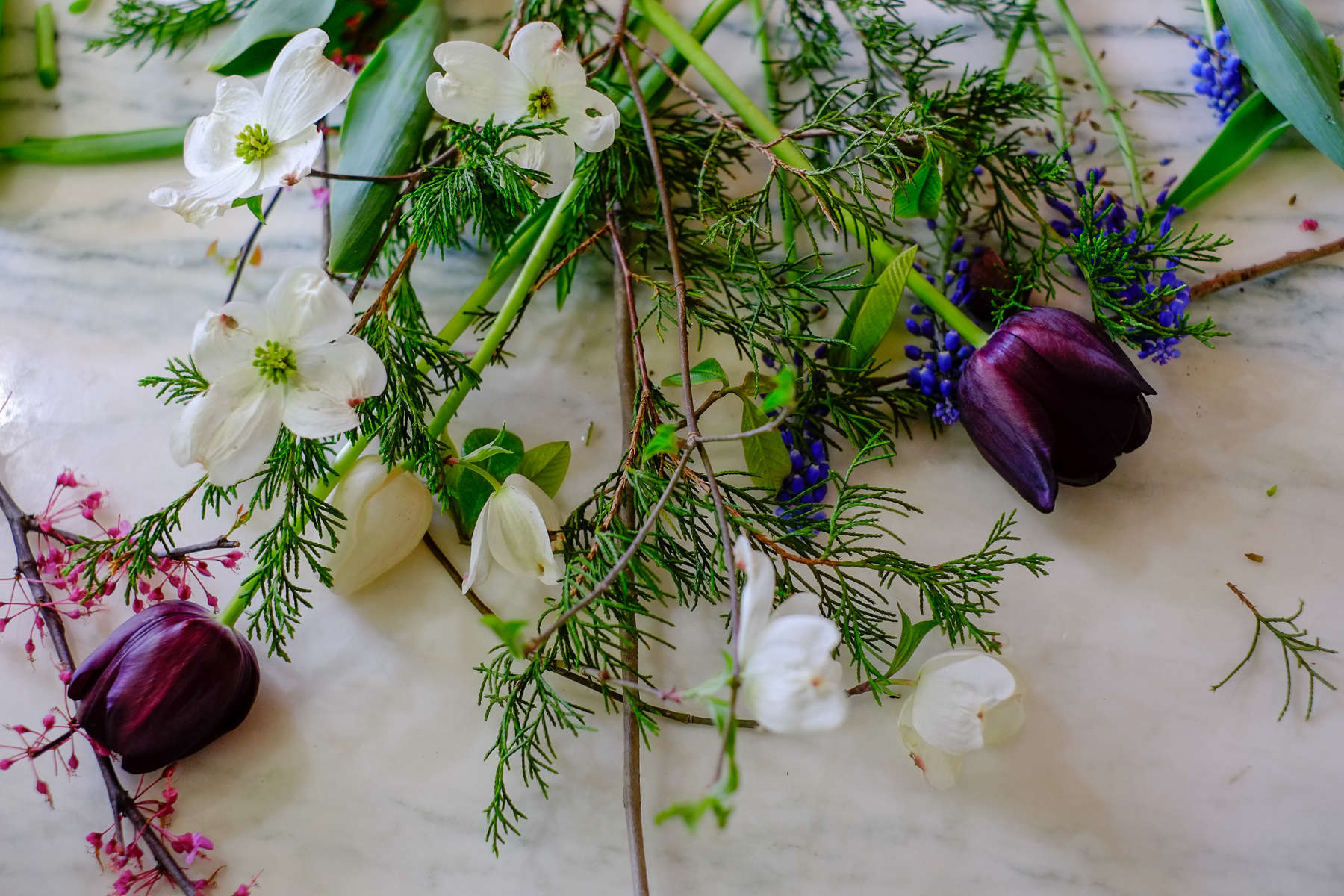 Above: Not all of Tara’s bulbs bloomed on time for the wedding, so she foraged for substitutes in the woods.

First, a recap. Shortly after Tara planted the bulbs (for that installment of the story, see Tara Getting Married, Part I), winter arrived.  It wasn’t just any winter: it was the longest, coldest, stormiest winter in recent memory. In Missouri, relatives and friends battled snow and ice and kept watch on the bulbs–and in Brooklyn Tara battled snow and ice and kept her fingers crossed.

In early April she went back to Missouri to see the progress (see Tara Getting Married, Part II) and to hire three local “crafty” young women to assist her in making the floral arrangements.

Bulbs were up in April, so when Tara made her final trip to Missouri five days before the wedding, she didn’t immediately plunge into nuptial preparations. Instead she went off to the woods to hunt mushrooms. Rumor had it that it was an epic season for morels, so Tara grabbed a basket.  Fortunately she also took her camera.  The woods on her grandmother’s property were full of wild plants in bloom: paw paw, sassafras, redbud, dogwood, and may apple.  Lilacs bloomed beside an abandoned house. Photographs of all of them came in very handy after it became obvious that not all her bulbs would be wedding worthy (alliums bloomed late, lily of the valley in her mother’s garden was too early). Tara showed her helpers the photos of the flowers in the woods  and sent them out to gather as many as possible.  She also had them cut cedar for garlands. 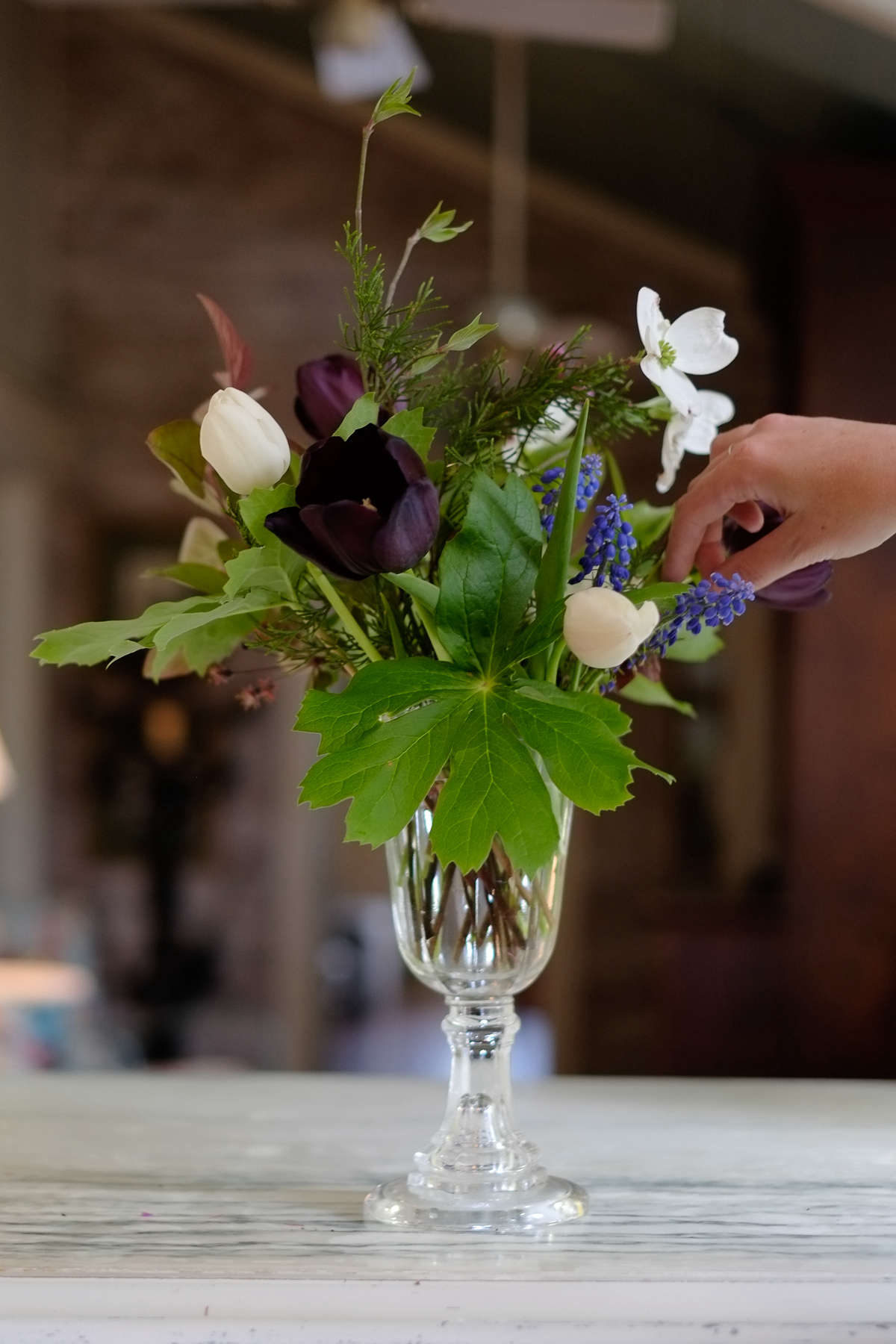 Above: Tara’s arrangements included foraged plants such as dogwood and may apple.

Back at the farm, Tara’s Pheasant Eye daffodils were blooming. Tulips in bloom had been moved into the old tobacco barn to keep them out of the sun and in top form. Of 500 tulips planted, only about 20 were past their peak and couldn’t be used. 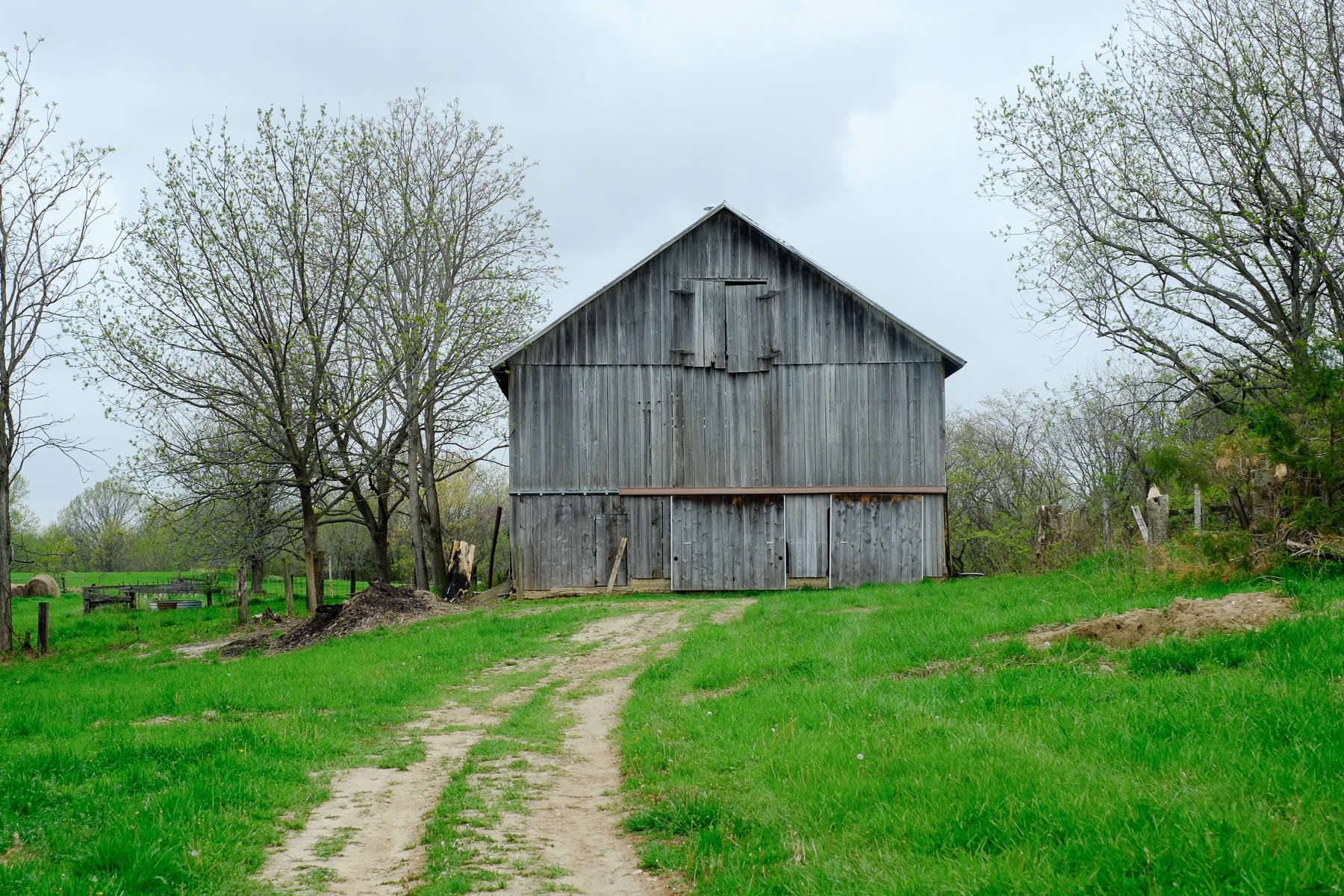 Above: The tobacco barn sheltered Tara’s tulips until it was time to cut them to make the wedding arrangements. 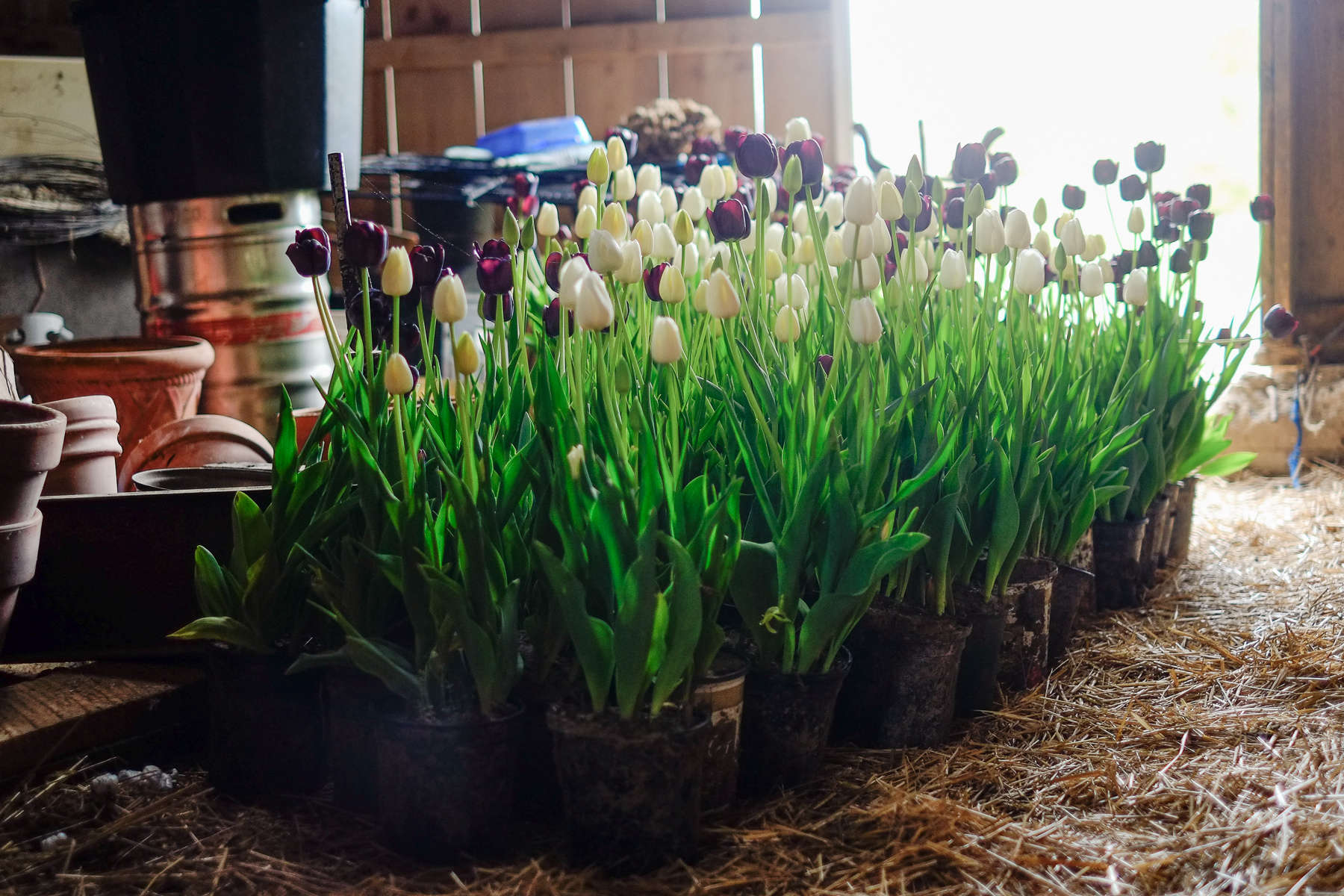 Above: Tulips in the barn, waiting for the big day.

Above: Purple Queen of the Night tulips are mixed with white ‘Maureen’ tulips.

Two days before the wedding Tara’s friend Kelli Galloway, also a floral designer, arrived and the two began work in earnest, setting up workspaces, gathering tools, and materials.  With 160 guests expected, 21 centerpieces had to be made as well as four bouquets and seven boutonnieres.  Oh yes, and three garlands, totaling 33 yards of greenery.  Tara used vases from her grandmother’s huge collection, deciding with Kelli that clear glass and silver would best show off her purple, blue, and white flowers. 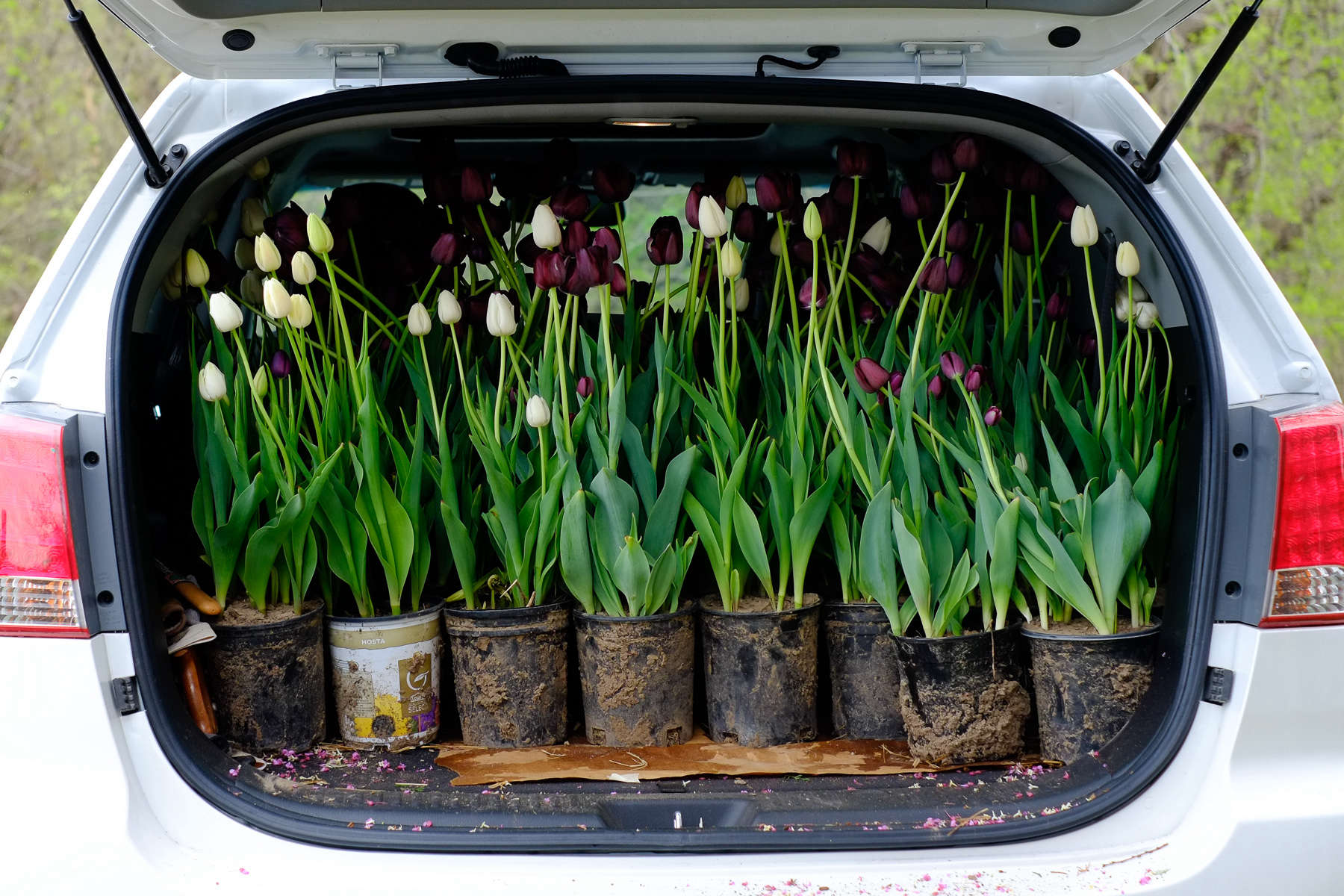 Above: Tulips making the trip from the barn to the house where Tara and Kelli had set up their floral design studio.

The day before the wedding the garlands were built and hung, and work was begun on the bouquets and arrangements. The weather, which had been unseasonably cool at the beginning of the week, was now heating up.  Tara and Kelli stored their creations in a dark part of the kitchen to keep them cool and fresh overnight. 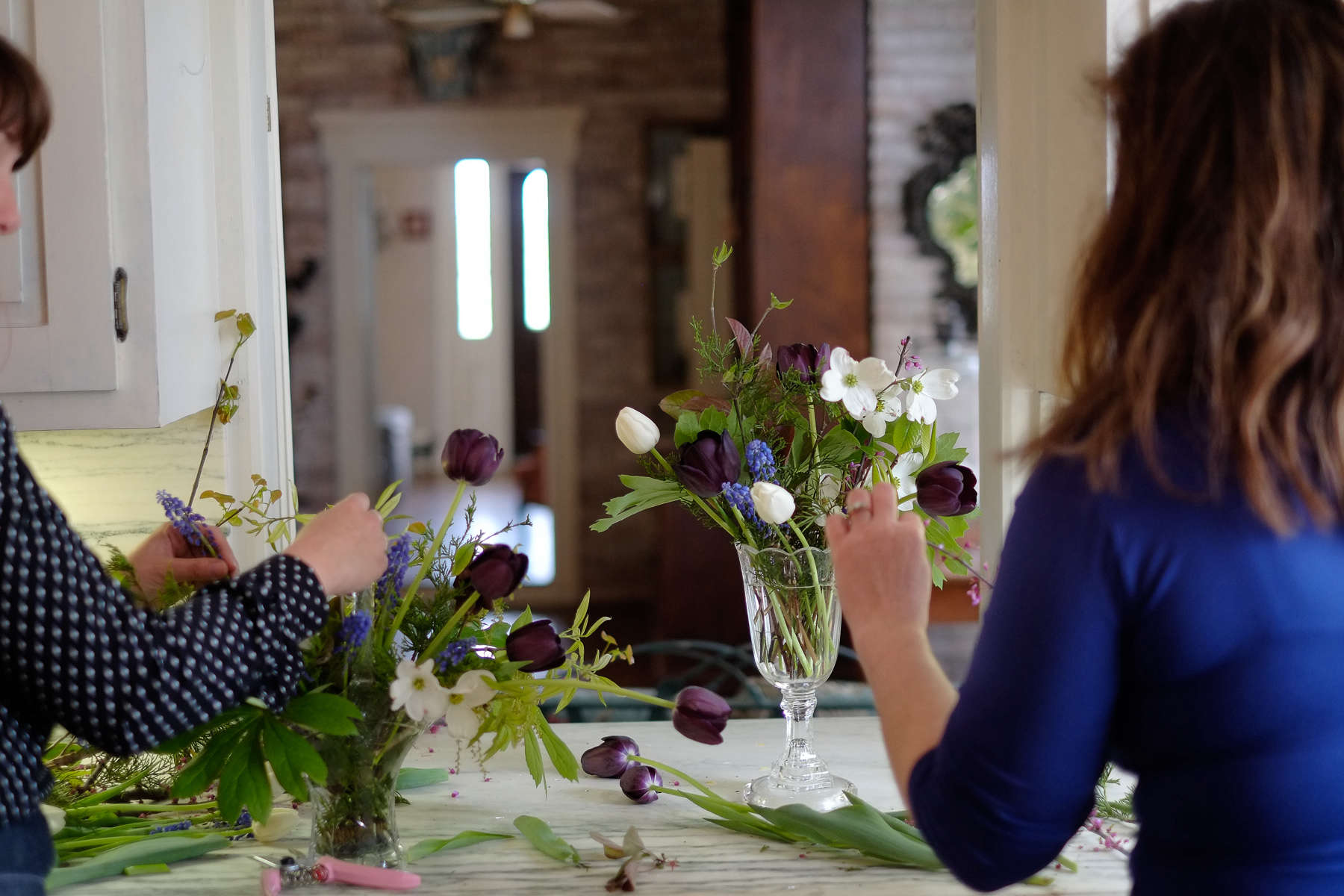 Above: Tara and Kelli arrange wedding flowers in antique containers.

On Tara’s wedding day, the ceremony was scheduled to begin at 5 pm, giving Tara and Kelli a few hours to finish and place the arrangements. There were a few last-minute glitches (bulbs planted in urns outside the house failed to bloom and had to be replaced, for instance). But overall? The event ran smoothly. The flowers–both cultivated and foraged–held up. And Tara even received compliments for being an amazingly calm bride. 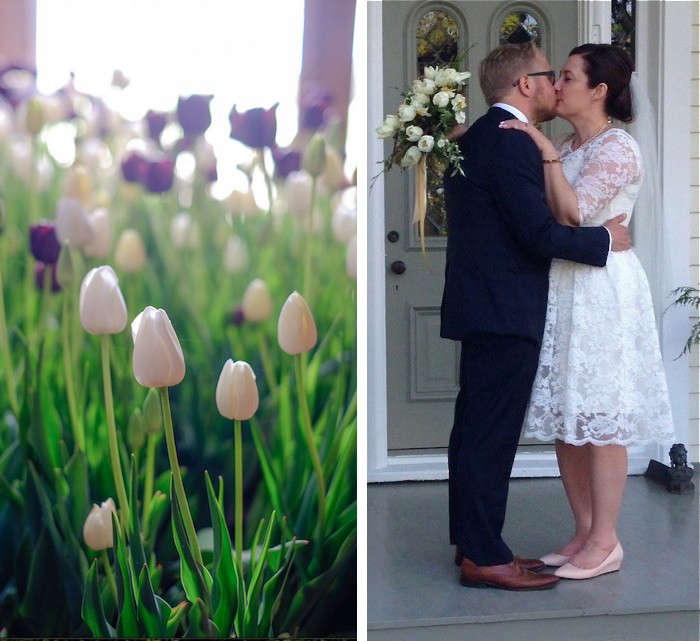 Above: From barn to bouquet. The bride and groom stand below a cedar and redbud garland. Wedding photo by Meredith Parry.

Now that Tara is married and back in Brooklyn, she says she is very glad she chose to grow and arrange her own flowers. She is grateful for the time she spent planting bulbs alongside her dad and feels that the wedding was inspired by the artistic vision of her grandmother. 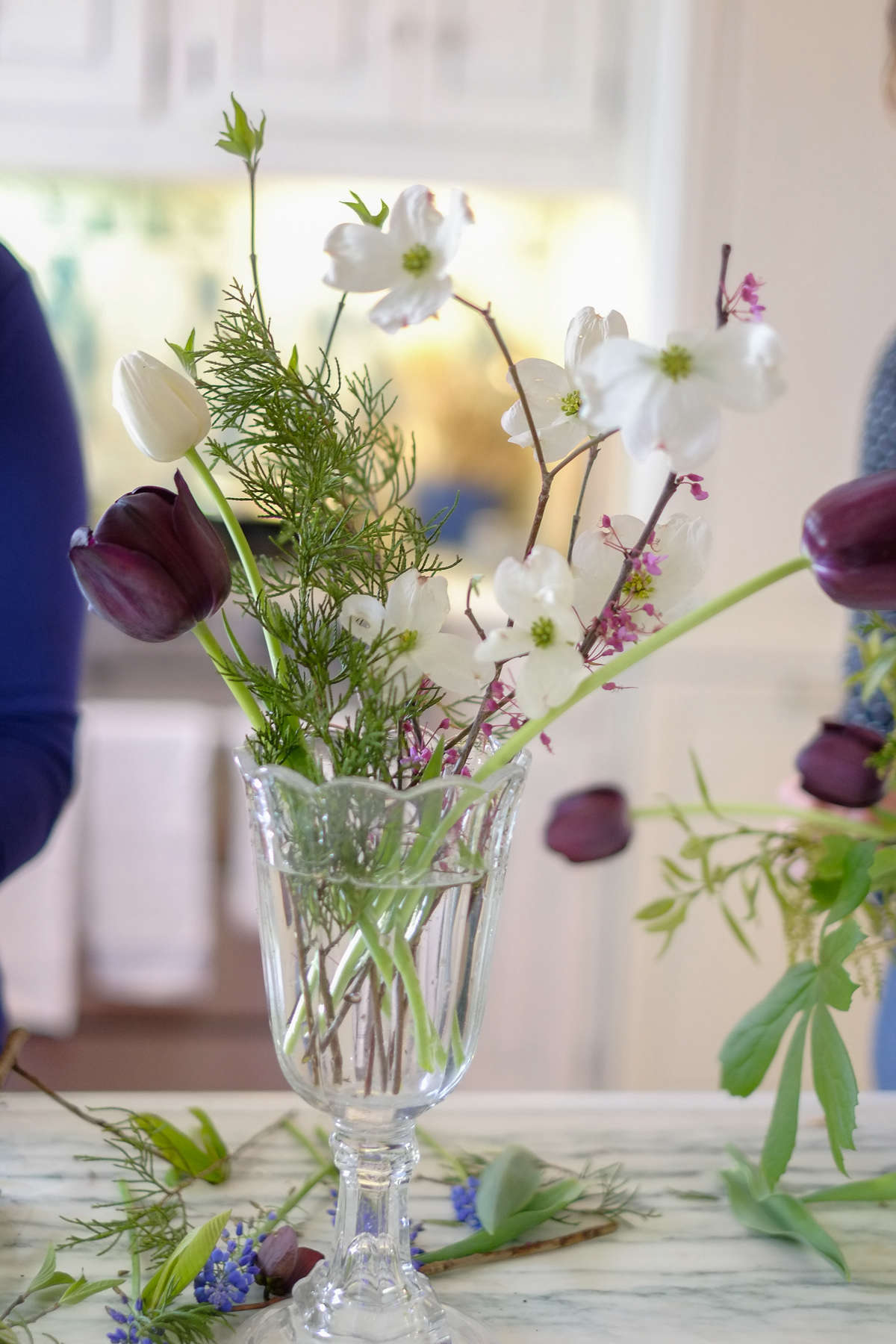 Above: Purple tulips stand out against a cut glass vase.

While there were worries along the way, Tara says at some point she just “trusted Mother Nature would take care of it.”  In fact her collaboration with Kelli was so enjoyable and so successful that the two plan to set up a consulting business for other brides who want to grow their own flowers. “We will plant and arrange for weddings anywhere,” is their aim and might well become their slogan.

Foraged flowers are fun: take a look at Foraged Ikebana Arrangements on Remodelista and A Foraged Botanical Tablescape for Mid-Summer.