After trying to clean them a million different ways, I’m taking chef Joshua McFadden’s advice: gently wipe each mushroom with a cloth until the grit comes off (he speaks in vegetable event, not in length-of-time-prescriptions) and pat dry. If they feel waterlogged, stick them in the refrigerator on paper towels for several hours (“until they feel fresh and plump”).

Joshua, who took pity on my mushroom plight and shared this advice while we were riding on a train to a dinner in honor of his new cookbook, promised that with this technique I won’t face any more slimy caps, chalky stems, or the residual schmutz on unwashed cremini. (He may have just been trying to butter me up so I would offer him one of the sourdough pretzels I bought at the station, but I like to think he saw in me a willing pupil.)

It turns out he is correct. It’s no wonder—the recent publication of  Six Seasons: A New Way with Vegetables has coincided with Joshua’s permanent anointment as World Champion Vegetable Whisperer. And it’s easy to see why: this is a book full of recipes for gardeners who cook. Read on for some of our favorites.

Since Joshua was a kid, he’s had a farmer mentality. He grew up in rural Wisconsin, and recalls in Six Seasons, “prowling around my neighbors’ gardens” with a salt shaker in hand, looking for tomatoes to pluck off the vine. He went to graduate school to study film but, after working at a string of restaurants to pay the bills, realized: “I always liked food more than I should have, and I was always better at cooking than I should have been.”

Following culinary school at Le Cordon Bleu in Portland, he continued to pursue his passion for produce. His first stop: raw food pioneer Roxanne Klein’s eponymous culinary hotspot—a restaurant with a kitchen where nothing was heated above 118 degrees—in Larkspur, California. (I was delighted to learn of this connection, as it brought back fond memories of huddling around Roxanne’s home-dehydrator with her daughter Ally, my middle school partner in snack-crime, conducting experiments with double chocolate chip cookie dough that a raw food chef might not have tried).

He has since spent time in many of the country’s top kitchens, including Lupa, Momofuku, Franny’s (where he created his now famous Kale Salad That Started It All, recipe generously disclosed in Six Seasons), and Blue Hill, before turning in his chef’s whites for dirt-stained dungarees when he became the manager of Four Season Farm in coastal Maine. It was there, says Joshua, that he really solidified his love for cooking with fresh, seasonal, local fare, putting on weekly dinners inside the farm stand’s produce stand. 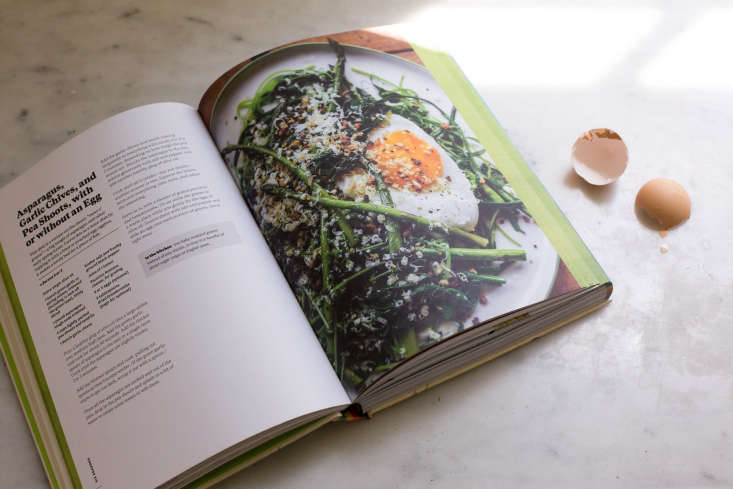 Now, as Executive Chef and Owner of Ava Gene’s and in the midst of taking over the Portland restaurant scene one venture at a time with his business partner Luke Dirks, Joshua’s focus remains on working with seasonal and local produce—many of the dishes in Six Seasons appear on the menu of Ava Gene’s, Joshua says. This summer, he is hoping to buy a 55-acre farm in the area. 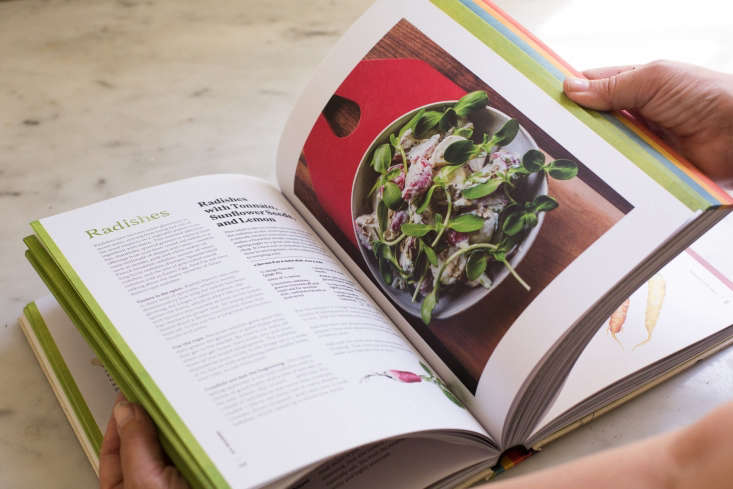 So, I figured I would give it a try. Join me as I take my now dry, fresh and plump Creminis (which appear in the Fall section of Six Seasons, but I have taken Joshua’s Words to Cook By at the front of the book to heart: “Don’t be a slave to a recipe. Add different herbs, use a new spice, omit something you don’t like—you’re in charge.”) and attempt a couple of Joshua’s creations. 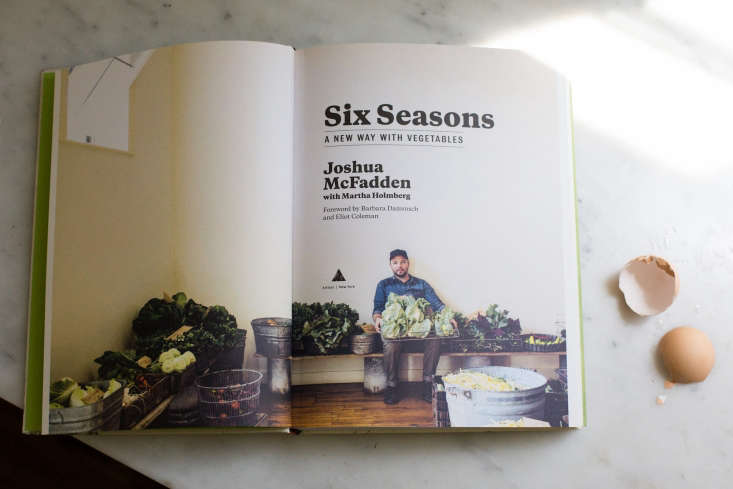 Little Gems with Lemon Cream, Spring Onion, Radish and Mint: A straightforward and completely wonderful spring salad. This is a gateway recipe to the liberal breadcrumb and seed use Joshua recommends. The Lemon Cream dressing is killer—you will have some left over, until you realize that it makes a transcendent dip for any farmers’ market purchases or vegetables from your own garden (or if you’re a fiend like me, anything in the kitchen short of your napkin).

Beet Slaw with Pistachios and Raisins: Joshua notes that, “If you’re lucky enough to get a bunch of root vegetables that still have their greens attached—and the greens are in pristine condition—you get a two-for-one bonus.” Save them to sauté later, or integrate them into your dish. This raw slaw is brightened with fistfuls of fresh parsley and mint leaves, and sits atop of bed of what my family members and taste testers are now calling “pistachio crack.” Of the pistachio butter/beet slaw combination, my father observed, “It’s like an adult PB&J.”

Lamb Ragu with Carrots and Green Garlic: “Look for the green garlic at farmers’ markets,” writes Joshua, noting that it looks like a “slightly chubby scallion” and has a sweet and mild flavor. I threw my Creminis into this one, and wasn’t sorry. Don’t be shy with carrot volume here, as they reduce (and sweeten in an addictive way) as you cook the sauce.

Kale Sauce with Pappardelle: Another Fall chapter recipe I was supposed to wait on (sorry Joshua!), but I was so smitten with the photo of garden-green sauce and the Lacinato kale in my Northern CA supermarket that, as if awoken from a trance, I sort of “came to” about 75% of the way through this recipe. Which, for the record, is about 10 minutes in. I wouldn’t be surprised if this one ended up in Food52’s Genius Recipes collection.

Charred Broccoli with Tonnato, Pecorino, Lemon and Chiles: As Joshua writes, this is “chips and dip, but with fresh vegetables instead of potato chips!” I would echo his use of an exclamation point here, if I weren’t in a self-induced Tonnato coma. So taken with the char here, my sternest taste tester started referring to this dish as “brocco,” as if it were a childhood friend.