A head gardener I know says that he would never plant boxwood now, unless there was a contingency plan. In other words, you need a fund to finance the replacement of said box after it is struck down with boxwood blight, a fungal disease that is spreading rapidly both in the UK and on other continents. And box, as we know, is not cheap. So why not plant something else? As the old gardener’s saying goes, one horticultural disaster is a new planting opportunity.

Above: At Kelmarsh Hall in Northamptonshire, boxwood is being edged out by yew and Lonicera nitida, also known as Twiggy Box Honeysuckle; available for $13 apiece from Plant Delights.

Some gardeners have discovered that by removing box, they suddenly free up their decorative vegetable or herb garden. The garden can be improved by the lack of traditional lines. Not to mention the tendency of low hedging to harbor slugs and snails. “Heritage” gardening on the other hand requires edging which appears to be in keeping with the original concept of the garden. At Kelmarsh Hall in Northamptonshire, the box “effect” is doing rather well.

Above: Lonicera nitida is used in the Sunken Garden because of its willingness to topiarize. It grows more quickly than box and is pruned twice a year. Here and above old, overgrown background box mingles with yew and is loosely cloud-cut. It forms an evergreen backdrop to the formal areas of the garden. Non-miniature box and that which is loosely maintained stands a much better chance of survival.

For more about yew, see Renew With Yew: The Easiest and Hardiest Hedge Shrub.

Above: In the Rose Garden at Kelmarsh, teucrium chamaedrys steps in for rounder, softer shapes. Teucrium Chamaedrys, which grows to a height of about 18 inches, gets spikes of pink flowers in summer. It is $7.75 per plant from Digging Dog Nursery.

Because it has a tendency to flop, teucrium also needs a trim twice a year. Note spirals in the background, shaped in unaffected box. 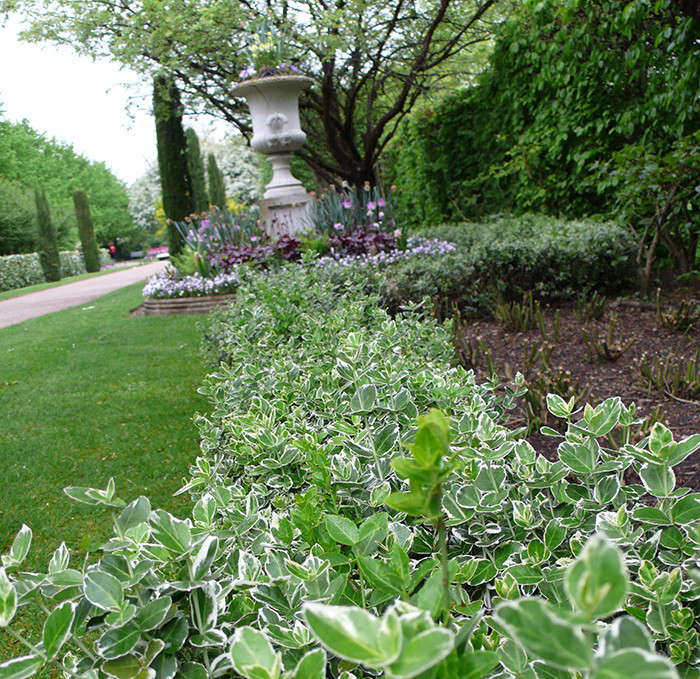 Above: Formal parterres in Regent’s Park, London. Sarah Cook, former head gardener at Sissinghurst, thinks that euonymus (shown here) has a lot of potential. Euonymus fortunei Emerald Gaiety is available for under £2 per pot at Buckingham Nurseries in the UK. For mild climates she also suggests myrtle, which is slow-growing and draught-resistant.

Above: No room for box here. Yew is kept impossibly small at the front of the Double Border at Kelmarsh Hall, while it simultaneously forms a large and wavy backdrop. The yew arches or loggias reiterate the theme. Since the natural instinct of yew is to grow into a large tree, it is imperative to keep on top of it from day one.

N.B.: For hedging plants which are allowed to do their own thing, see When is a Hedge not a Hedge?

Additionally, get more ideas on how to successfully plant, grow, and care for boxwood with our Boxwood: A Field Guide.

Hike of the Week: Getting Lost in the Jardin du Palais Royal in Paris