With its bulky, light-absorbing form and its prevalence in churchyards, one could mistake yew as a symbol of death. The opposite is true: the yew trees are older than many of the ancient churches they shelter. Yews’ extreme longevity and evergreen nature encourage hopes of eternal life.

It is the yew berries which are mainly to blame for the misconception. They’re poisonous, right? Well, not exactly. If you don’t mind spitting out the highly toxic seeds you can munch on the flesh of the berry, but you might find that you have better things to do. Yews were sacred to the Celts and prized by Druids. It is thought that early Christians up-cycled these sites already inhabited by yews, for building their new churches. 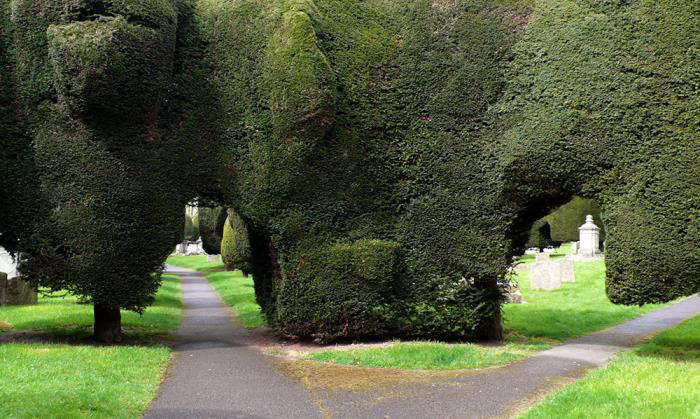 Above: The churchyard at Painswick, with monolithic blocks of yew. Slow-growing, yews need to be pruned only once a year. Among the more popular of the 200 named cultivars are Taxus Baccata ‘Erecta’ and Taxus Baccata ‘Fastigiata’ (each available, a in one gallon pot, for $29.97 from Nature Hills in the US). For UK gardeners, potted English Yew Hedging Plants are available for prices ranging from £5.50 to £17.85, depending on size, from Ashridge Nurseries. 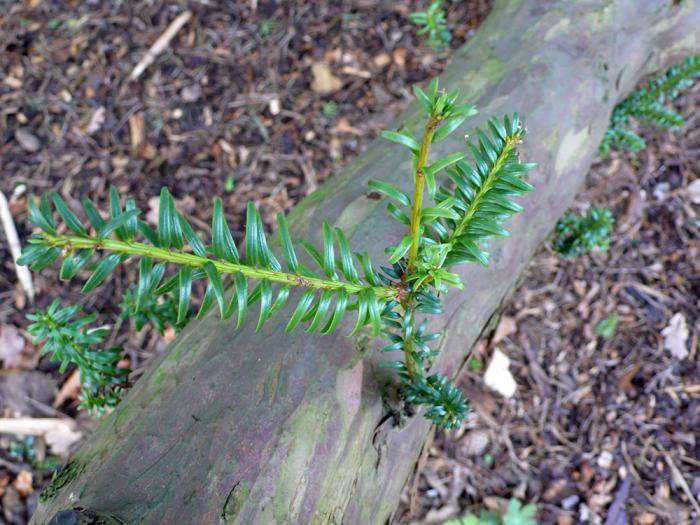 Above: Cut back a Taxus baccata and it will re-sprout happily from unlikely places. Yews are difficult to age because they become hollow after about 500 years. Many yews in the UK are more than 2,000 years old and studies of branches which have fallen into the cavities of old trees have shown them to be more than 4,000 years old. 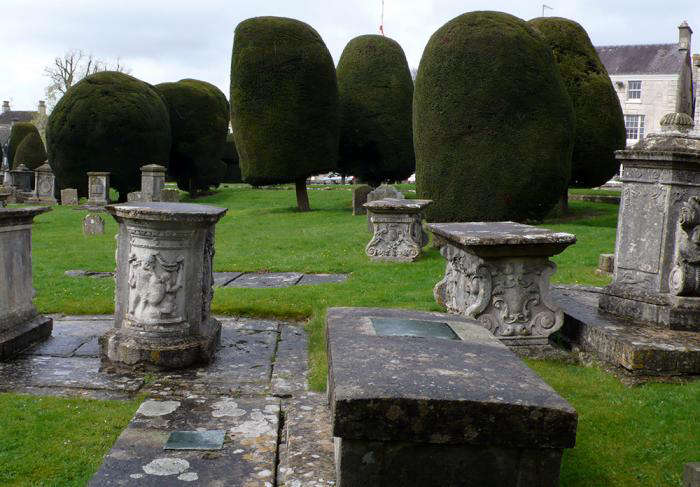 Above: A random collection or a formal avenue of yews is a common sight in rural churchyards. In Painswick, Gloucestershire, shown here, there were traditionally 99 yews, until an initiative to mark the millennium by planting a yew in every parish in the land. This took the number up to 100, which was caused alarm locally but no actual disaster. 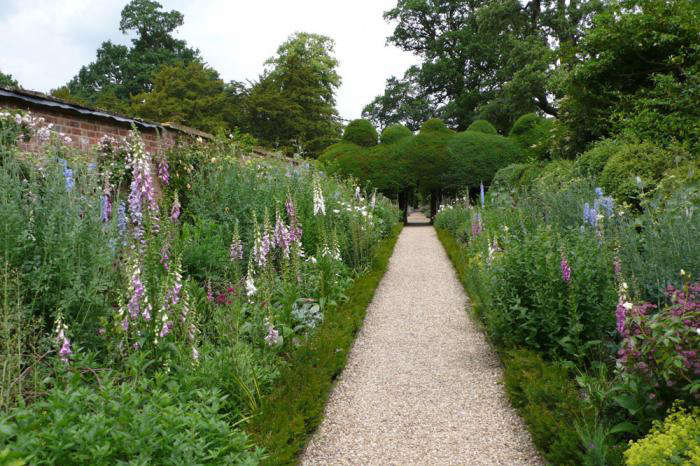 Above: Many English gardens which first made their mark in the 1920s and ’30s, including Kelmarsh, were defined by box edging. Since the arrival of blight, the box has been ripped out or is sprayed to within an inch of its life. Yew has been chosen here and the Double Border is none the worse, punctuated as it is by loggias of yew. It is so pliable it can be any shape or size desired. 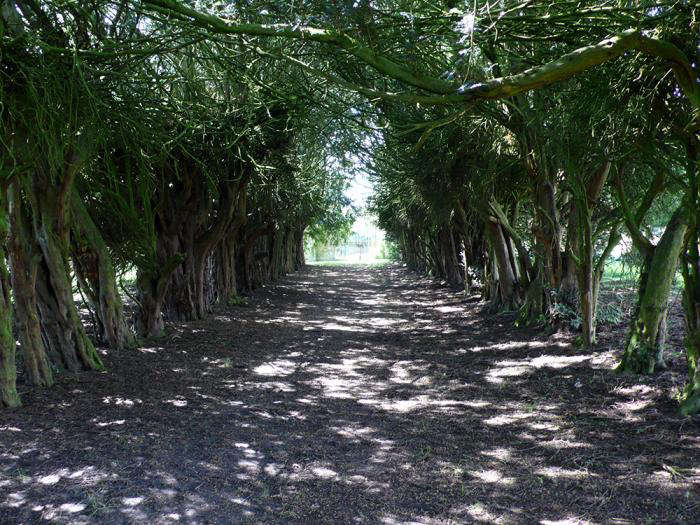 Above: A little book of Yew, published by Sage Press and available from Ancient Industries (£4), takes the tree of life back to the context which many of us associate with it. We are reminded that in The Hound of the Baskervilles, there is a Yew Alley at Baskerville Hall, in which Sir Charles meets his canine death. Dr Watson speaks of “a long, dismal walk… between two high walls of clipped hedge.” Beside the body there are “the footprints of a gigantic hound!” The yew alley above is at Easton Walled Gardens in Lincolnshire and was allowed to become derelict before being clipped back into a “dismal” walk. 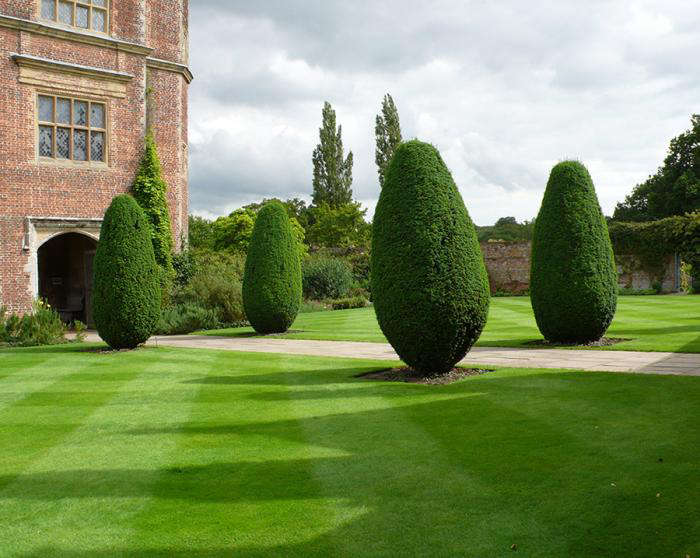 Above: Irish yews at Sissinghurst, also familiar to visitors of Chatsworth. Wild yew and Irish yew seem to be immune to garden fashion whereas the golden yew has the power to raise a few eyebrows. At Highgrove, there is a great avenue of golden yews leading up to the front of the house. According to a garden guide there, the Prince of Wales had the whole garden razed to the ground when he moved in so that he could start afresh. Sir Roy Strong, his adviser at the time, said something along the lines of “And of course you’ll be removing the golden yews, Your Royal Highness?” to which the answer was No, HRH would not. Was this to put Sir Roy in his place? At any rate it could be a case of cutting off your nose to spite your face as they are very yellow indeed and do not become less yellow with age, or with the arrival of distractions like ancient olive trees on the terrace. 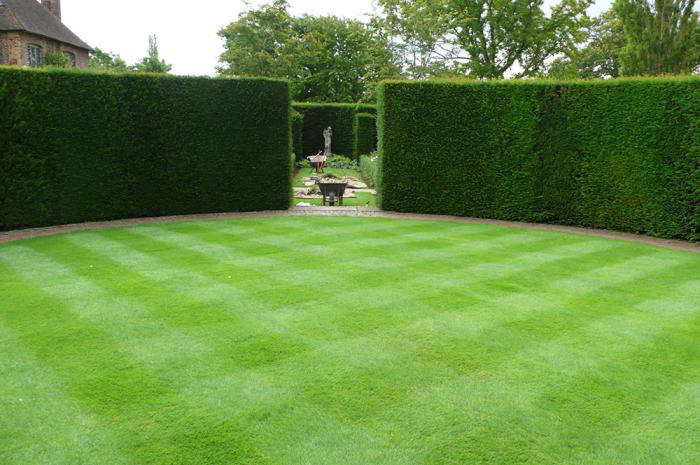 Above: Yew walls at Sissinghurst on a day when it is closed to the public and is allowed to be a little bit of a mess. Yew is useful for wall-building and most beloved of Arts and Crafts gardeners. “You may almost be said to build with yew hedges,” wrote Christopher Lloyd, from neighboring Great Dixter. 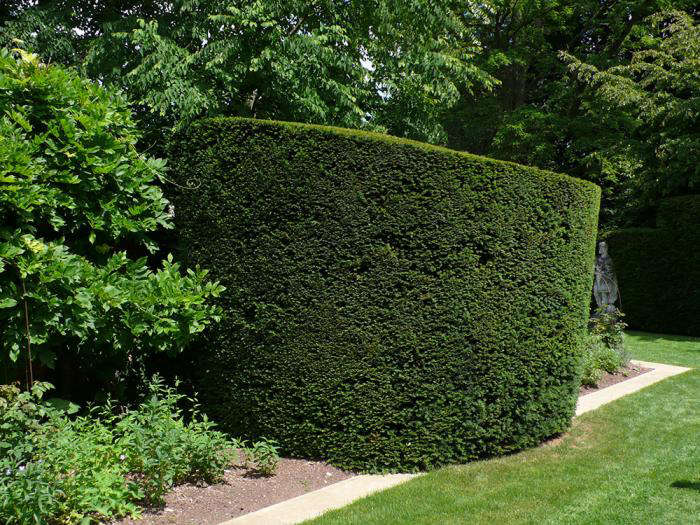 Above: Yew is often considered to be the best plant for topiaries. Here it provides a pleasingly obstructive cylindrical punctuation point in a formal garden.

N.B.: For more hedge ideas, see “Hornbeam: A Hedge for All Seasons.”

Finally, get more ideas on how to successfully plant, grow, and care for yew tree with our Yew Tree: A Field Guide.