More than half of the houses in the US have issues with water in the basement or under the foundation. But dampness doesn’t have to be a way of life. Let’s celebrate the humble sump pump, which can transform a dank below-grade space into a dry and usable storage or living area. In preventing water damage, a sump pump also promotes a healthy home environment.

As Gardenista’s editor-in-chief can attest, a sump pump is the first line of defense against basement dampness and flooding. “After buying our house, we discovered that the basement flooded with every heavy rain,” says Michelle. “We kept having to rush downstairs and bail. Josh said it felt like he was in that scene in The Deer Hunter where the prisoners are kept in an underwater pen, waiting to be pulled up to play Russian roulette with their Viet Cong captors.”

It took only a small electrical device to change their lives. “Now we have a sump pump that mysteriously runs year-round–even in dry California,” Michelle says. “From my desk I can hear the whoosh as it sends water into the drainage pipe under the driveway. It is a very comforting sound.”

Above: A sump pump can protect the appliances and other gear in a basement laundry room  from moisture or unexpected flooding.

What is a sump pump?

According to Merriam-Webster, a sump is “a low part or area where liquid collects when it drains from something.” A common example is the lowest point in a basement floor. If water seeps in, a sump pump can send the water outside where it belongs. The device, usually installed in a specially constructed pit, keeps the floor dry and prevents flooding. 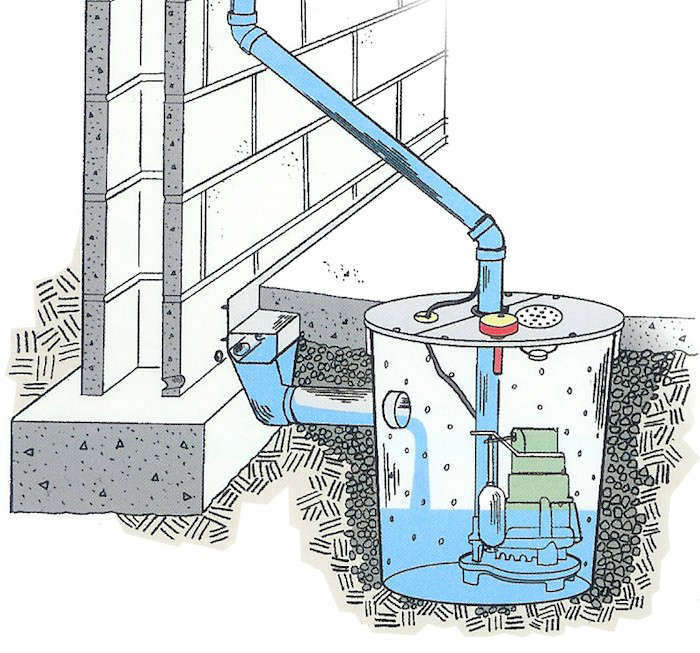 Above: A basement sump pump sits in a pit below the floor level. Water that collects is pumped back outdoors. Illustration via Retrofitting California.

Do I need a sump pump?

Does water pool on the floor? Obviously, a heavy rainstorm can cause moisture in your basement. But the culprit may be another source, such as a high water table, an underground creek, or runoff from a neighbor’s steep bank. Ignore the wet floor at your peril. You’re not only losing usable space, you also may suffer expensive damage to your property and threats to your family’s health, if mold and mildew develop. A sump pump won’t cure your problem, but it can abate the symptoms. 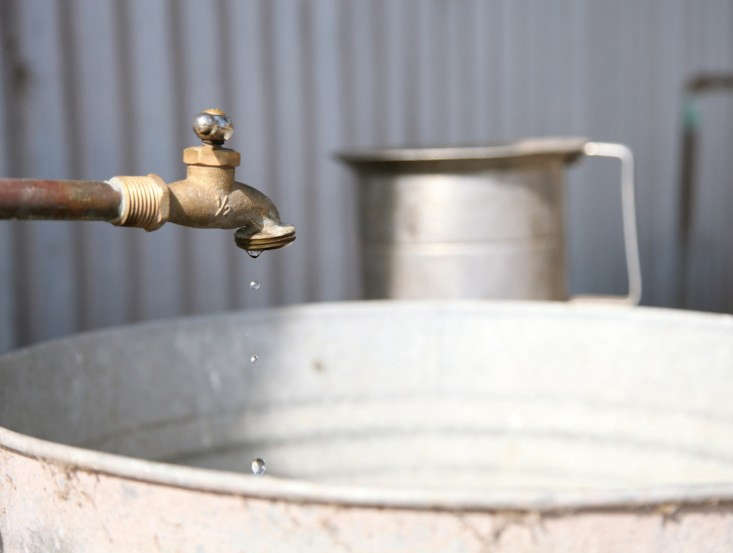 Above: Flooding from storms can cause expensive damage. A sump pump kicks in to handle the water that migrates into the basement. Photograph by Meredith Swinehart.

How do sump pumps work? 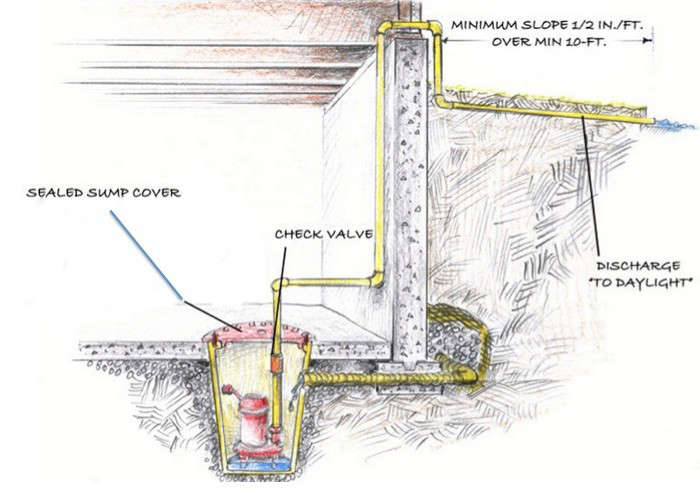 Above: Sump pumps take the water that gathers in a sump pit and pump it up, out and away from the house. Image via EPA.

The sump pit, sited in a low spot of a basement or crawl space, collects water from perimeter drains or when it seeps up naturally through the soil. As the pit fills with water, the pump turns on automatically, activated by a float arm (much like the one in a toilet) or a pressure sensor. The device pumps liquid up and out of the pit through a pipe that’s directed away from your house to a spot where the water can drain into the ground rather than against your foundation. The pipe usually has a one-way check valve to prevent water from flowing back into the pit. 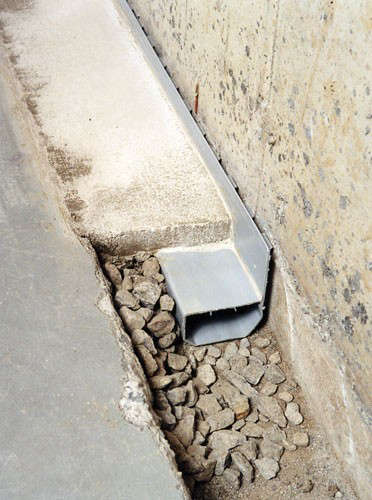 Above: A perimeter drain pipe, installed in a basement floor to collect water and feed it into the sump pit. Photograph via Basement Systems.

What type of sump pump should I get?

There are two primary types of sump pumps: submersible and pedestal. Both are available with different levels of power, which determines how long they can run and how much water they can discharge. Most residential sump pumps range from 1/4 to 1/2 horsepower. It’s important to understand your needs so you don’t get caught with a pump that can’t keep up.

A submersible sump pump sits in the sump pit, and can become covered in water as the pits fills up. The pump has a waterproof casing, usually made of cast iron, stainless steel, or plastic. Some warn against plastic: It doesn’t disperse heat as well as the other materials, and when the pump is working hard it might overheat and give out.

The pedestal sump pump is a tall, skinny affair that sits above the sump pit. Its float arm reaches down into the pit and activates the pump as the water level rises. Pedestal pumps are less expensive, because they don’t require a waterproof casing, but they’re louder and fully visible. 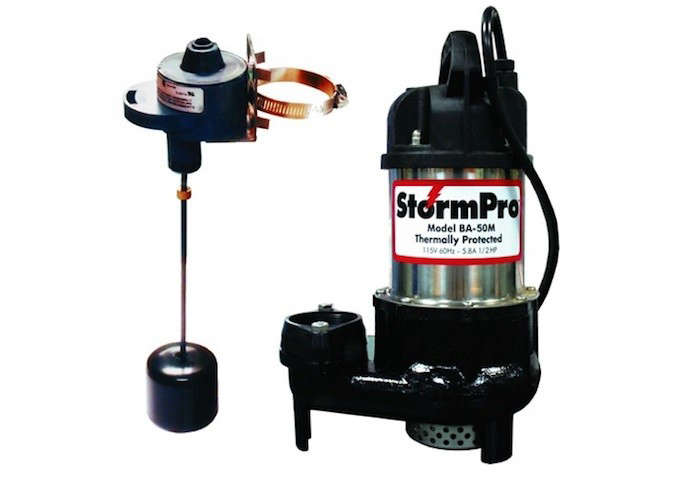 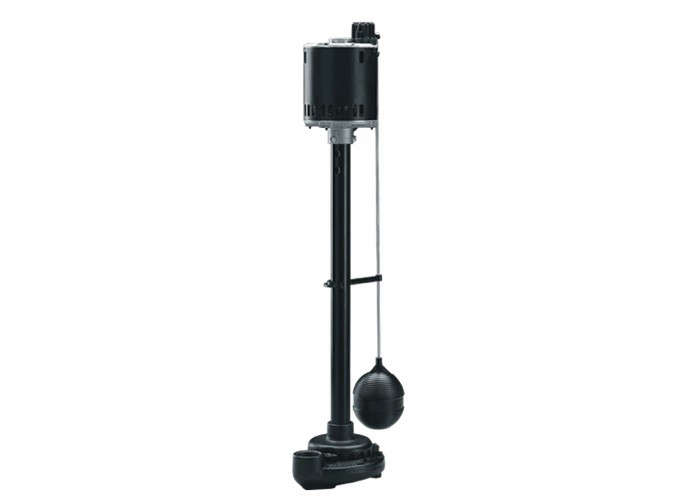 Above: The Wayne 1/2 Horsepower Cast Iron Pedestal Sump Pump has a corrosion-resistant steel column and a high-capacity discharge that rivals that of most submersible pumps; $151.99 at Sump Pumps Direct.

How do you install a sump pump?

Weatherproofing and waterproofing are important, so we recommend that you hire a professional for the job. But it’s useful to understand the basic mechanics of installing the pump, even if you don’t do it yourself. Popular Mechanics offers a comprehensive Sump Pump Installation Guide.

The pump is just one piece of a basement water-prevention system. You also will need a sump pit liner, discharge pipes, and often a basement perimeter drain that feeds into the sump pit. Be sure you purchase your pump and liner in tandem so they fit together. (Or, if you already have a sump pit with a liner, measure the liner to get a pump that fits.) The sump pit should be covered with a lid to prevent fumes from escaping (the EPA warns against naturally occurring radon gas emitted by sump pits) and to keep out debris. 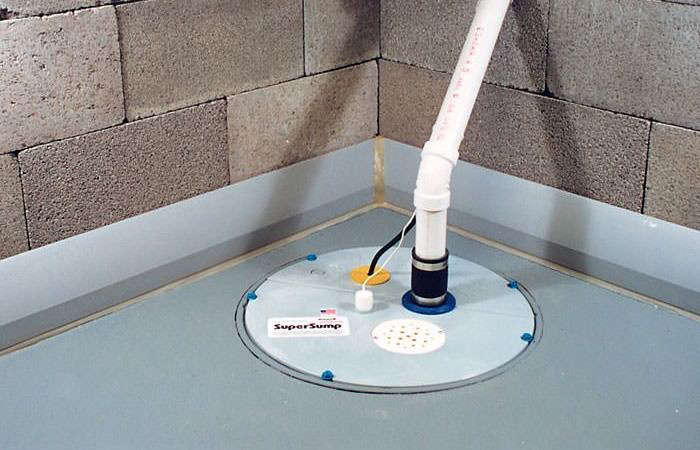 Above: A submersible sump pump system is covered by a lid to prevent gases from escaping. Photograph via Basement Systems.

What if my sump pump fails?

High-quality sump pumps are very reliable, but they may stop working for a handful of reasons. The main cause is loss of power: Most residential sump pumps run on electricity, so the storm that pours water into your basement also may knock out the power, thus disabling the pump. If you live in an area known for frequent power outages, consider installing a battery-powered backup sump pump, or a combination primary-and-backup system (see below). Sump pumps also can fail because of a clogged outlet pipe, a deactivated float arm (say, if the pump gets tipped at an angle), or overheating. For peace of mind, get a pump with an alarm system that notifies you of a shutdown.

Power user tip: Never store family memorabilia on the floor of a basement that might flood. 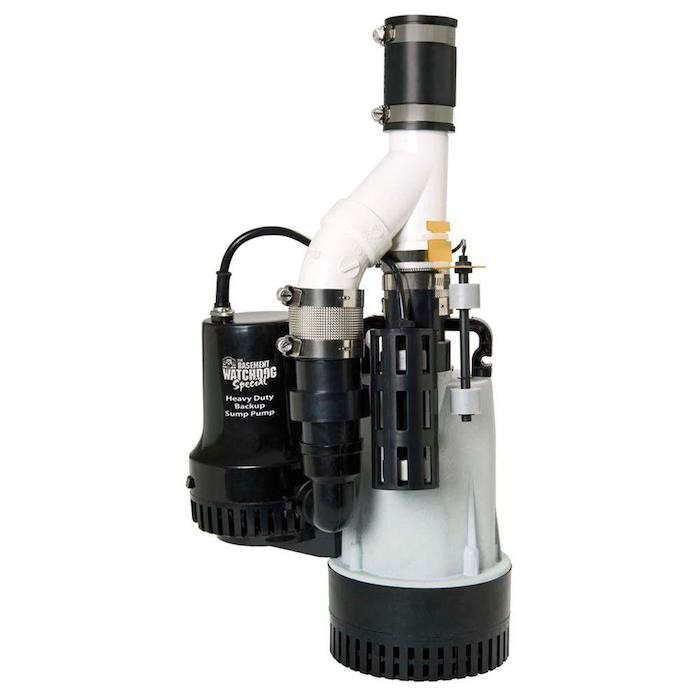 Above: The Basement Watchdog 1/2 Horsepower Combination Sump Pump System is compact enough to fit into a sump pit only 12 inches in diameter. A combination system, it has a battery-operated backup pump that kicks in if the power is interrupted to the primary pump, or if water is coming in too fast for the primary pump to handle alone; $397 at Home Depot (note: battery must be purchased separately).

How do I maintain my sump pump to keep it working?

As with any important household appliance or equipment, your sump pump should receive regular maintenance. That’s especially important given the consequences of sump pump failure. Waterproofing contractors offer periodic maintenance, checking the sump pump as well as other key water-drainage components. If you’re doing it on your own, follow these steps:

Controlling water outside your house is also important. To find out how to keep water from entering your basement, see our features on Rain Gutters and Gutter Guards. And, for an attractive alternative to downspouts, consider Rain Chains.

See all of our Hardscaping 101 Features. Meanwhile, over on Remodelista, visit a Victorian Remodel with an Industrial Edge that makes the most of a basement.

Buzz Worthy: How to Help Honeybees Through Winter, With Island Bee Project in Brooklyn