Some people, on Sunday afternoons, might visit a park, or a cafe, to read a book or spend time with a friend. But just north of Berkeley, in Albany, CA, people come to Flowerland. It isn’t just a nursery, it’s also a place to sit, have coffee and a cookie, and say hello to the neighborhood dog. 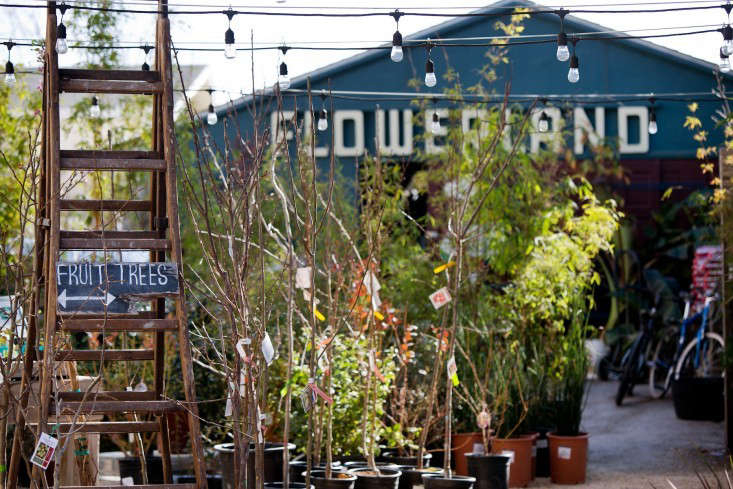 Above: The nursery, which was built in 1945, is one of the few spots of green on a long commercial corridor. 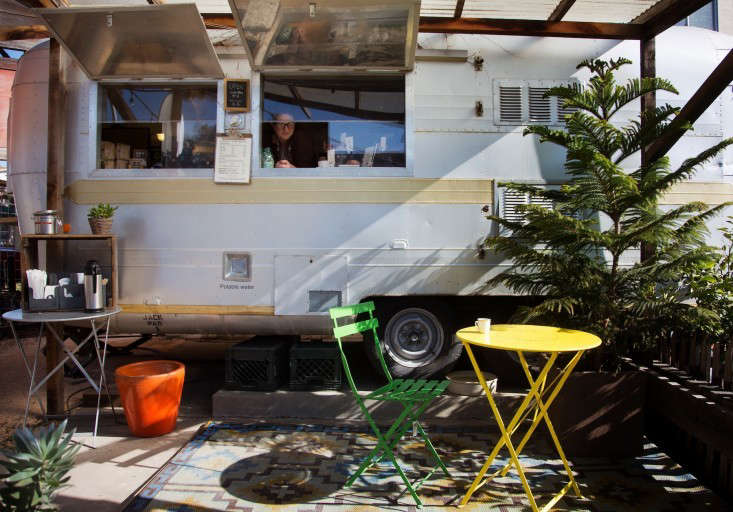 Above: A 1969 Princess Airstream sits in the front of the nursery, serving espressos and cappuccinos from a side window. It’s operated by Local 123, a nearby third-wave cafe. Pastries come from local bakeries. The coffee is from Four Barrel. 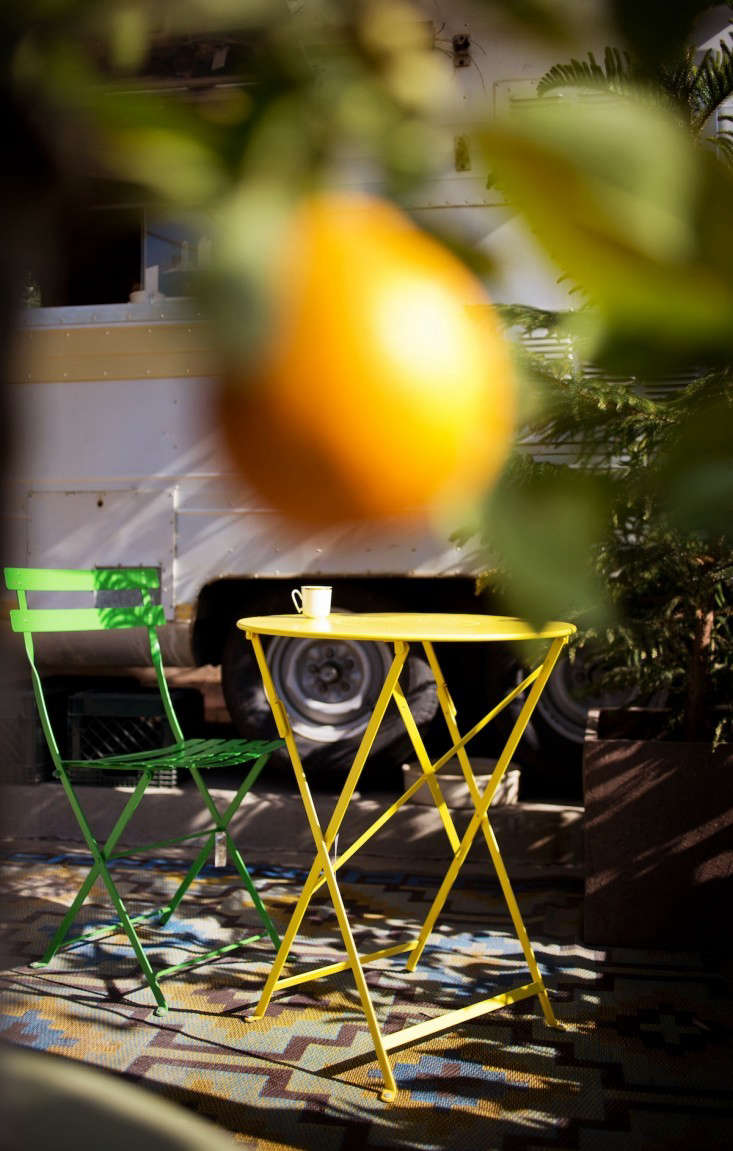 Above: Candy-colored cafe tables, Adirondack chairs, and a cement bench that gives off radiant heat allow people to sit and consider the greenery in winter. 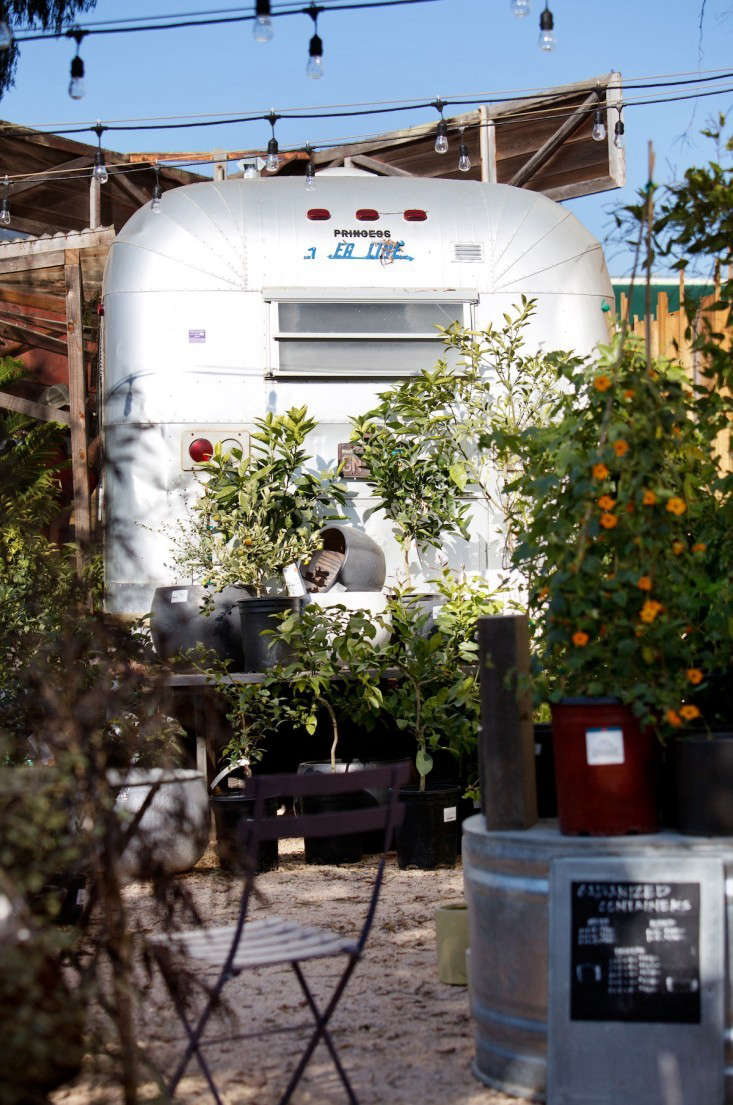 Above: “It seemed like a nice gesture to have a spot where people could come and not feel like they had to shop to be here,” says Carly Dennett, Flowerland’s owner. 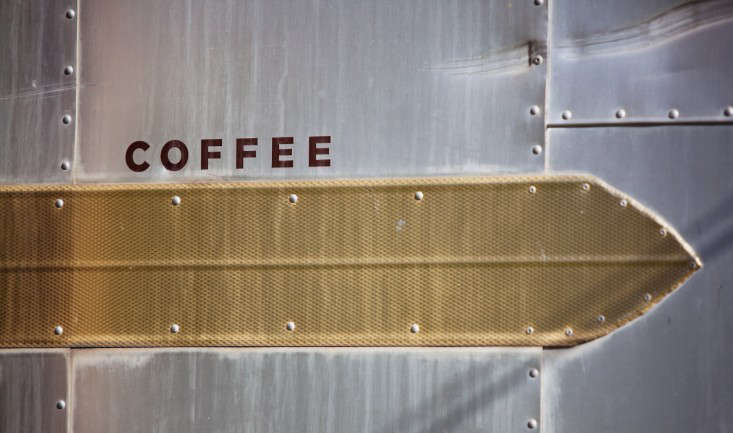 Above: It had been Carly’s dream to have an Airstream at the nursery, and fulfilling that dream came naturally.  After both the nursery and Local 123 were mentioned as two of fashion designer Erika Tanov’s favorite places in a newspaper article, the owners of the two businesses subsequently met. “I told the owner, Frieda, that I’d love to have an Airstream trailer, and she said, ‘I actually happen to have a friend who has an Airstream he needs to get rid of.’ ” 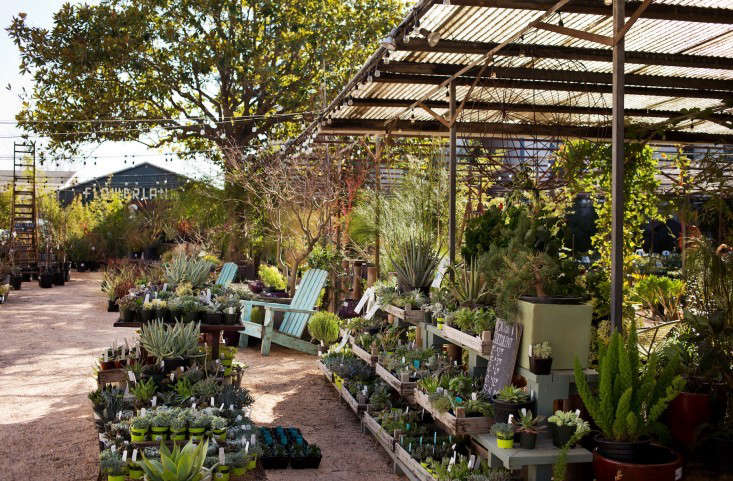 Above: Getting the Airstream up and running was a three-month project. Now, even in the slow, winter months, Flowerland stays vibrant.

“I just really love the activity,” says Dennet. “I love it on the weekends. Families come, and there’s kids, and there’s doughnuts, and people having coffee. Of course the nursery benefits from that too. I think when you’re sitting there, you can really see the plants, instead of just walking through.” 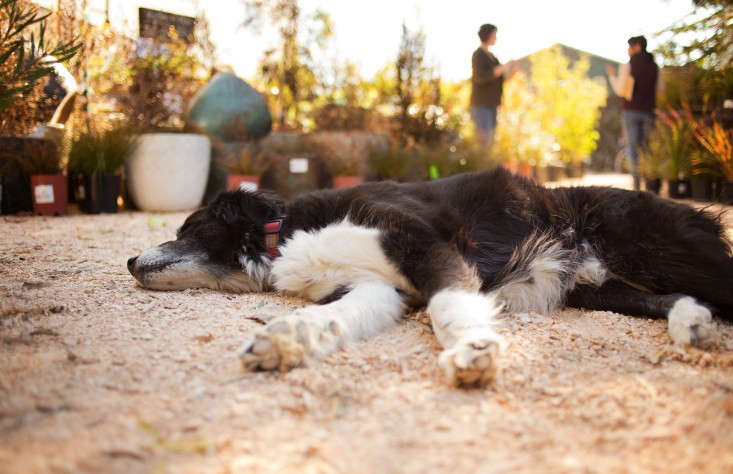 Above: And 8-year-old Tommy, Dennet’s border collie mix, is a constant, gentle presence. When he isn’t napping, “he loves to sit by the front of the nursery, watching what’s going on. Or go through the trash bin, looking for pastries.” 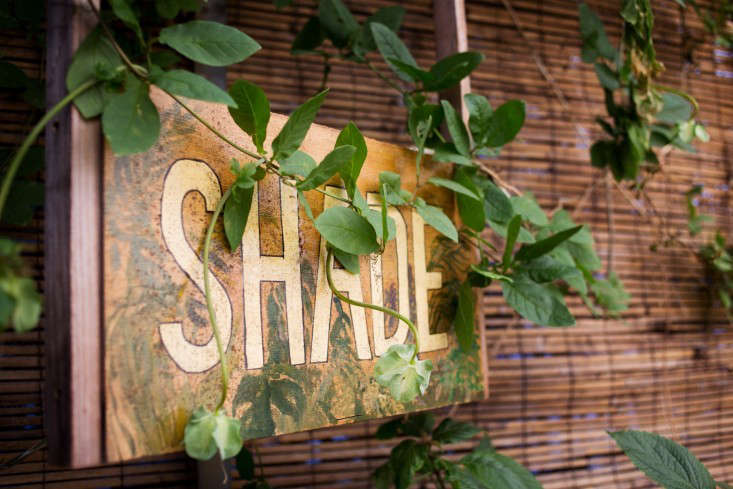 Above: Instead of neatly arranged rows of trees and shrubs, the nursery has nooks and crannies, which makes for good wandering, and good daydreaming, coffee in hand. “It’s rustic. Nothing is ever perfect, or done,” says Dennet. 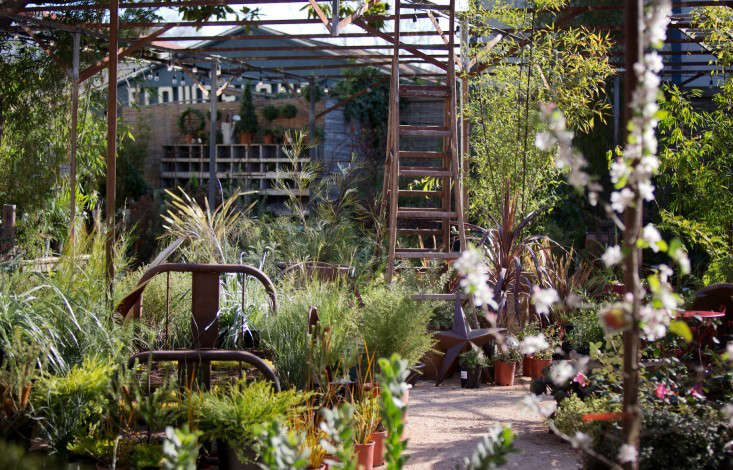 Above: Scattered among the native grasses, succulents, and drought tolerant plants from South Africa and Australia are found objects, including this old, scaffolding ladder and iron bed, both flea market finds. Now, the bed is laced with mosses; later, Dennet hopes to plant it with wildflowers. 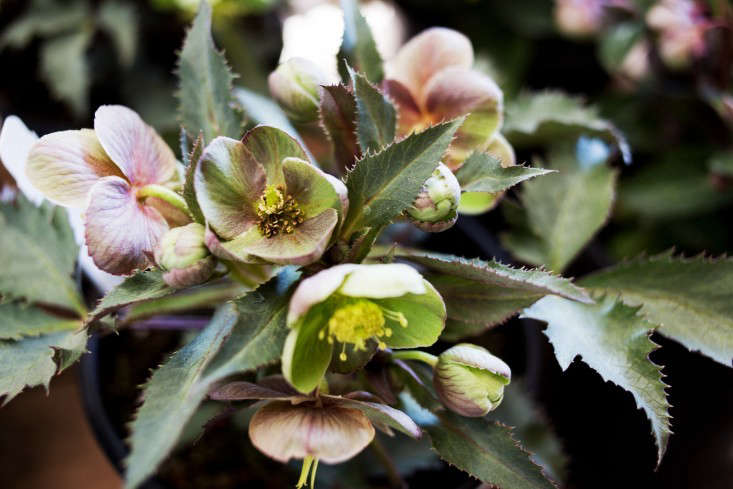 Above: Carly admits to being a plant nut; before she opened the shop, she would spend whole days in nurseries, coming home at night to read plant books. Hellebores are a favorite, with their subtle color. 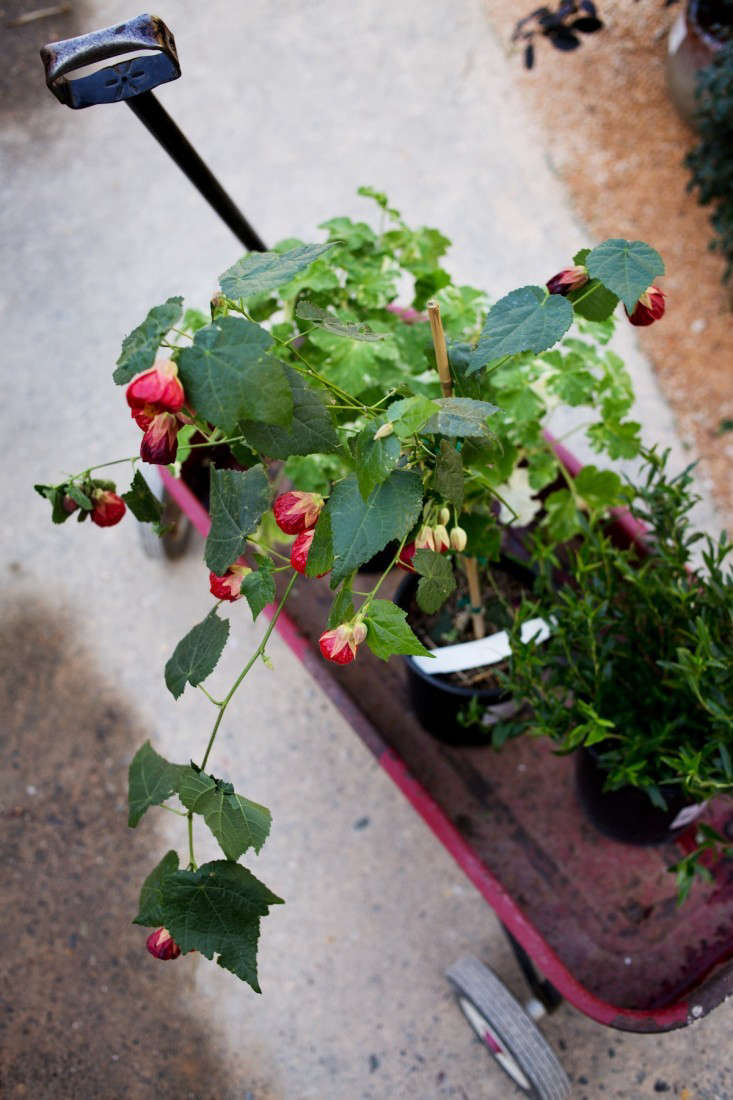 Above: “We really love textural plants,” says Dennet. “I do love flowers, but I personally would be happy with a garden full of texture, and very few flowers. I think that happens a lot to plant people. You start to fall in love with the texture, the leaf, the subtle color combinations. Flowers are just icing on the cake.” 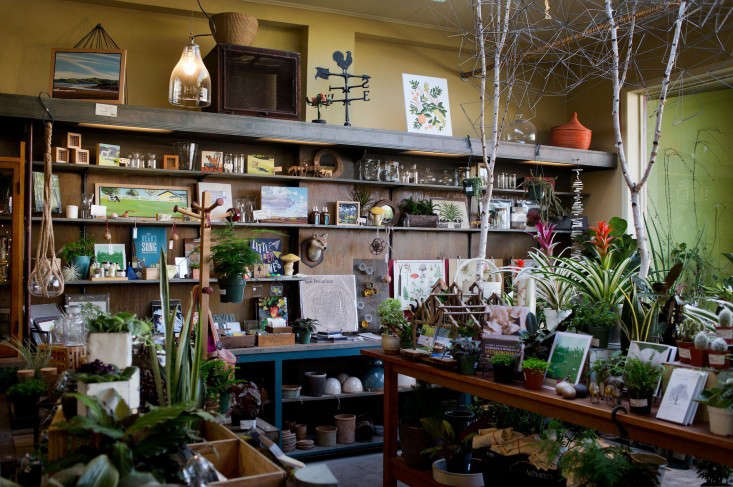 Above: Flowerland’s gift shop has a forest-floor theme, inspired by Carly’s childhood growing up in woodsy Mendocino County. Branches rise to the skylight, mimicking trees, and tree stumps prop up books and jewelry. Marmalades, olive oils, and artwork are on display on the country store-style shelving, a legacy from the building’s original owners. The green paint has been stripped, leaving behind a coppery green stain on the redwood. 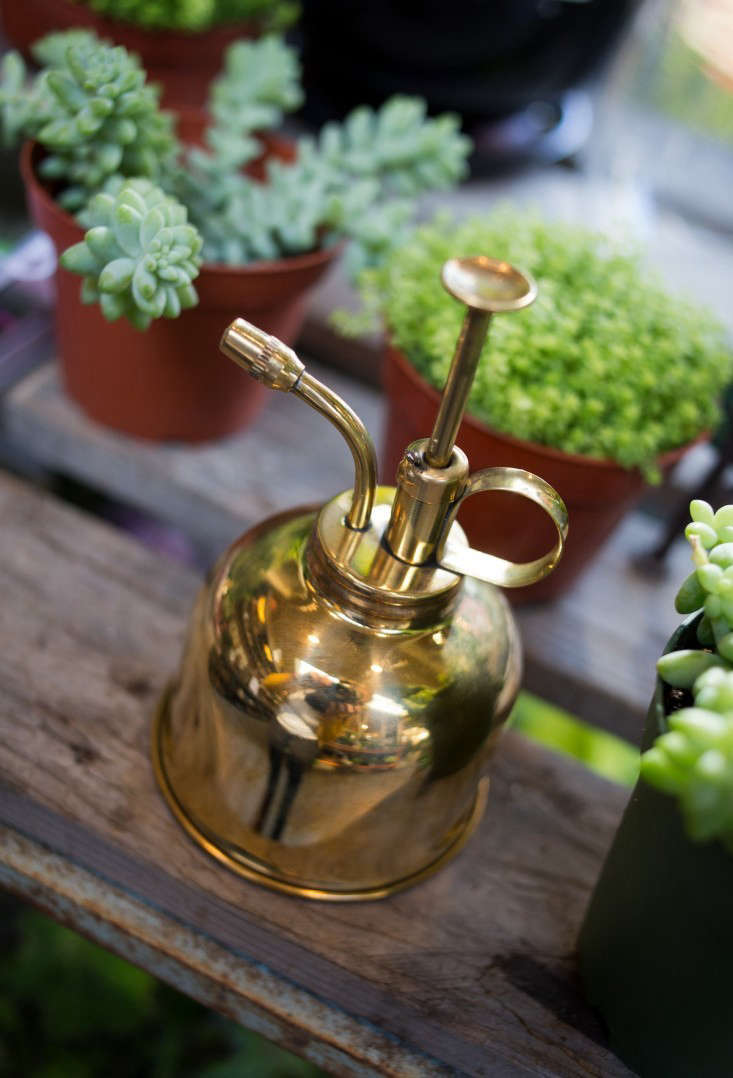 Above: “Things happen organically here,” says Dennet. “We try to have around inspiring materials, so that the staff feel like taking part, and being creative. And a lot of interesting things happen that way.”

Taking a tour of the East Bay? Stop in also at Oakland’s Coolest Garden Shop.

Lusting for an airstream trailer to call your own? See Wanderlust: 10 Airstream Trailers for Small Living.

Architect Visit: A Modern Landscape for a Midcentury Remodel in Melbourne