It is the tree of life, spanning millennia, with hard wood that lasts for hundreds of thousands of years. It is the tree of death, every part of it toxic, except the red flesh that encases the poisonous seeds. For gardeners, yew is a magical tree, unbeatable for topiary, providing a garden with a sense of dignity and intrigue. Clipped razor straight or grown in amorphous lumps and bumps, yew is contemporary as well as retro: it is a tree of opposites. 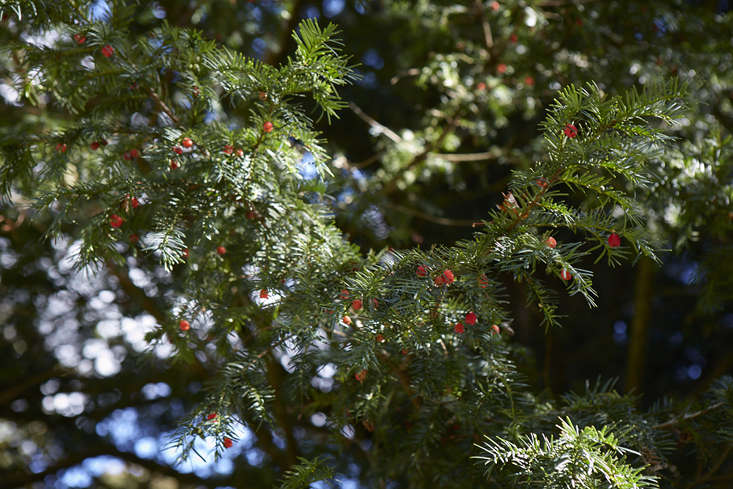 Above: People who claim to loathe yew—because it sucks up light and moisture—plant it quite happily as a smooth green hedge or cut into a cone. An early detractor, William Robinson (godfather of “wild” gardening and colleague of Gertrude Jekyll), railed against yew as a design element, complaining that many English and Scottish gardens were “disfigured” when this fine native tree was “carved into ugly shapes.” Yet 100 years later we are still disfiguring, with relish.

As a building block, yew is beyond compare. Although William Robinson complained that artificial clipping looked uncomfortable with a looser style of planting, yew is increasingly appreciated in its role as a backbone to prairie or meadow planting. 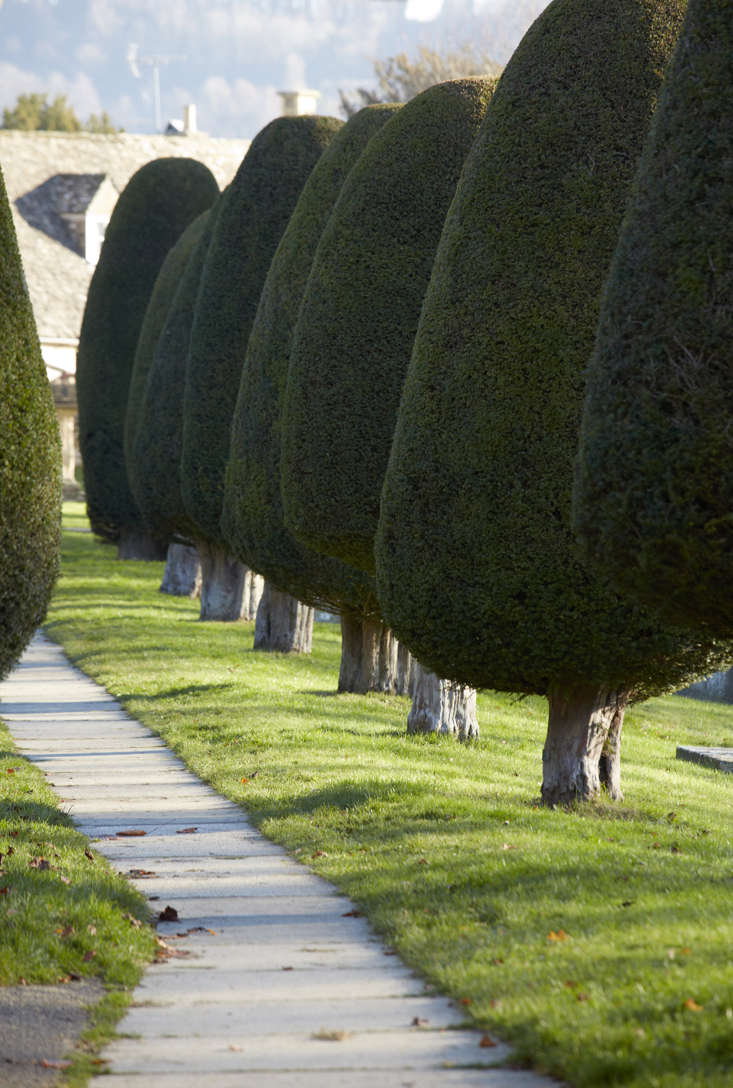 Above: The yews of Painswick churchyard, in Gloucestershire. Historically, there is a connection between yew, churchyards, long bows, and cattle. Yew was the ideal wood for making a springy bow. Churchyards were the only part of a settlement that was enclosed, before the 18th century. This made them ideal locations for growing yew, which would otherwise be munched happily by livestock, before the animals dropped dead.

There is also a connection between yew, pagan burial sites, and churches. With their contrasting symbolism of death as well as life, yews were sacred to Druids. Since these sites were later appropriated by Christians, several ancient yews in England (well over 1,000 years old) predate the churches that they stand close to. 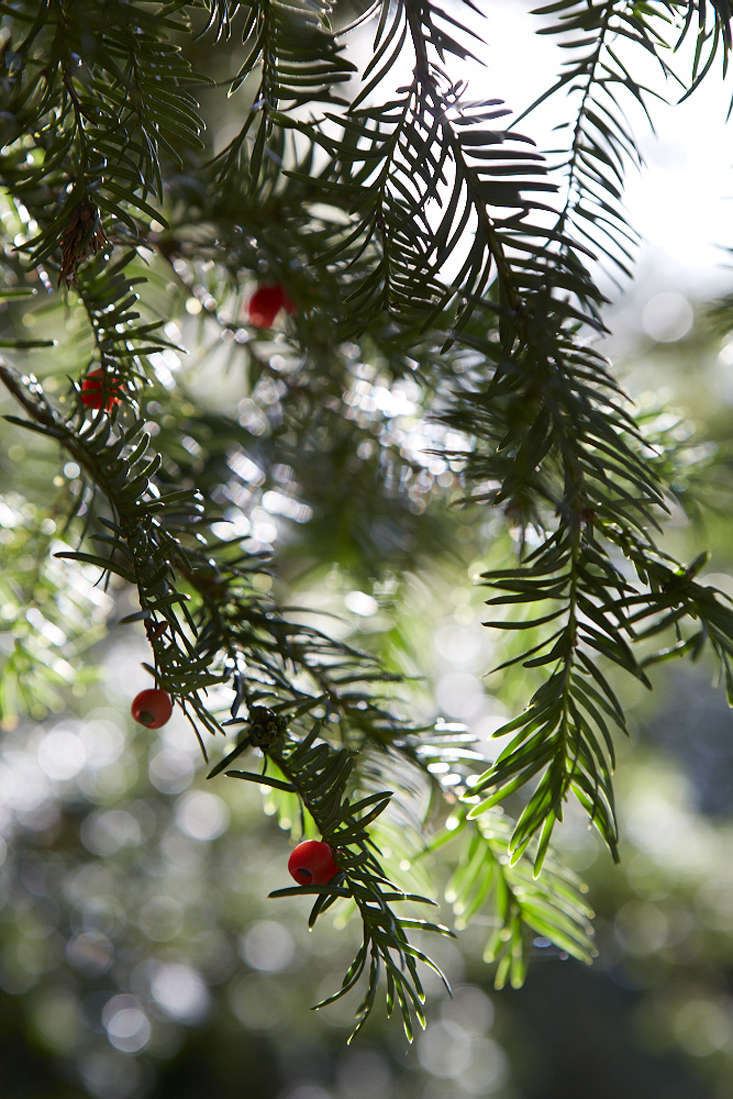 Above: The Latin name for yew is particularly descriptive, with Taxus descending from the same word that gives us “toxic” and baccata meaning “laden with berries.” Unlike the nettle and its sting, branches of yew retain  toxicity even after being cut from the source.

The foliage of Taxus baccata is used in cancer treatment; taxol has anti-cancer properties, decelerating the growth of affected cells. 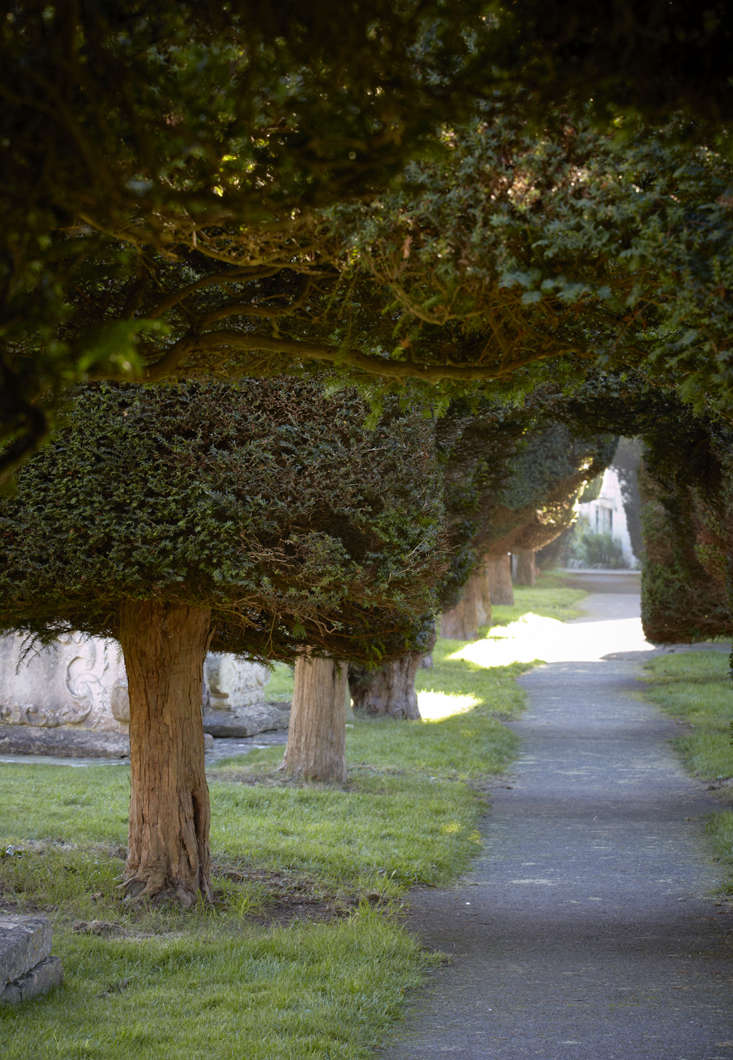 Above: Standing in a tunnel of yew and looking up is instructive. Its strange beauty is revealed beneath the smooth velvety veneer, twisting into prehistoric shapes. Left entirely alone, yew trees are hauntingly beautiful, in their natural shaggy state. 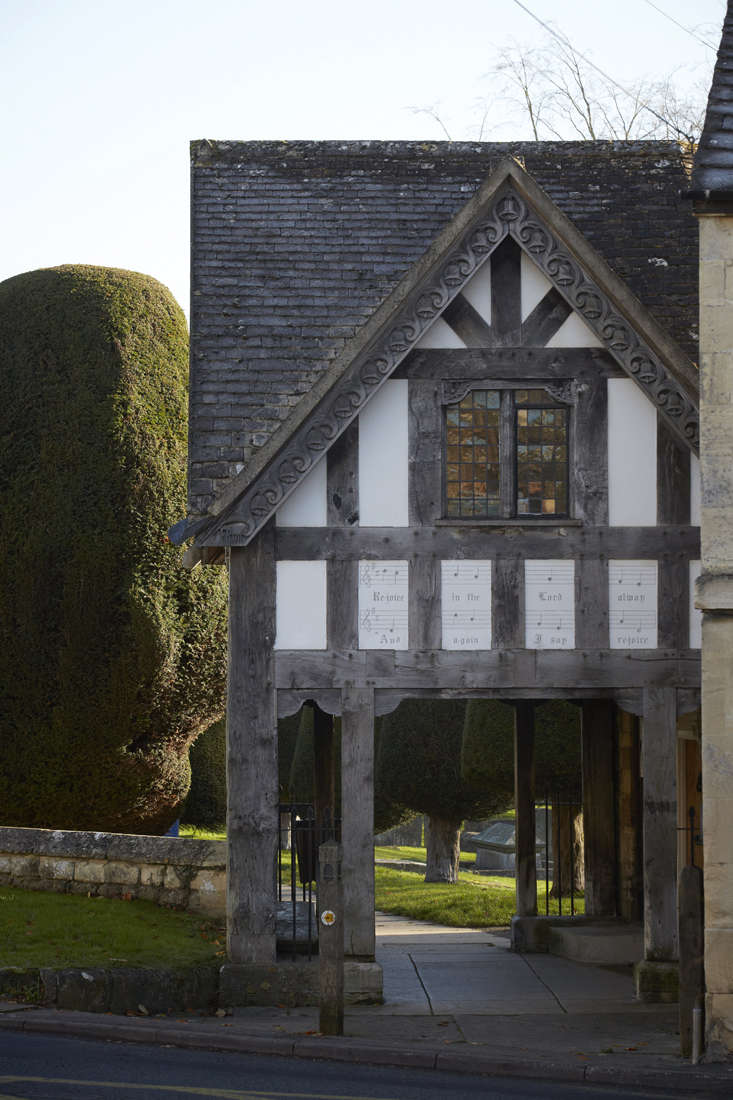 Above: The “architectural” shapes of yew sit well with real architecture. 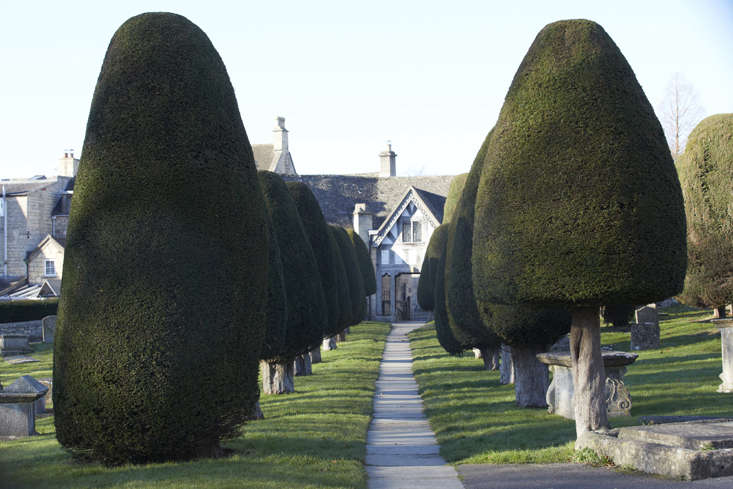 Above: At Painswick Church, there are “about” 100 yews, all meticulously clipped. Traditionally there were 99, as it was thought to be tempting fate to plant any more (the number at last count was 103). 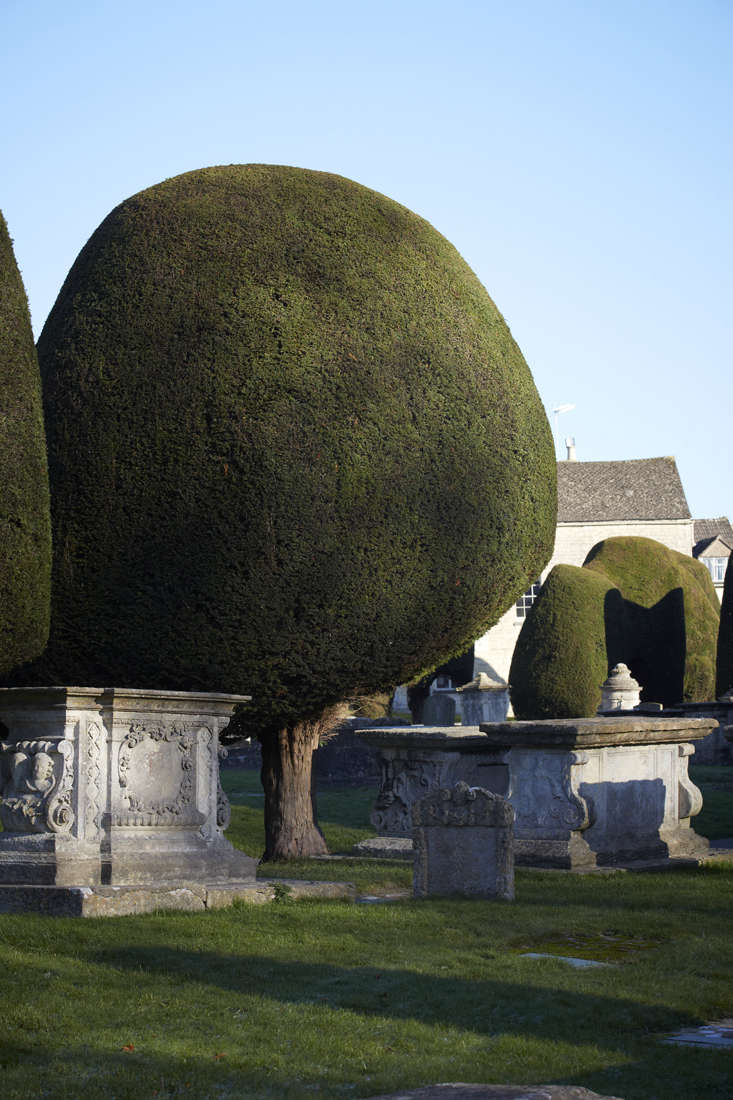 Above: The foliage of yew is so dense on the exterior, with plenty of room inside, that it’s a great nesting tree. Its berries, which appear in autumn, are eaten by blackbirds, field fares, thrushes, as well as small mammals. They make a very satisfying crunch when you step on them. 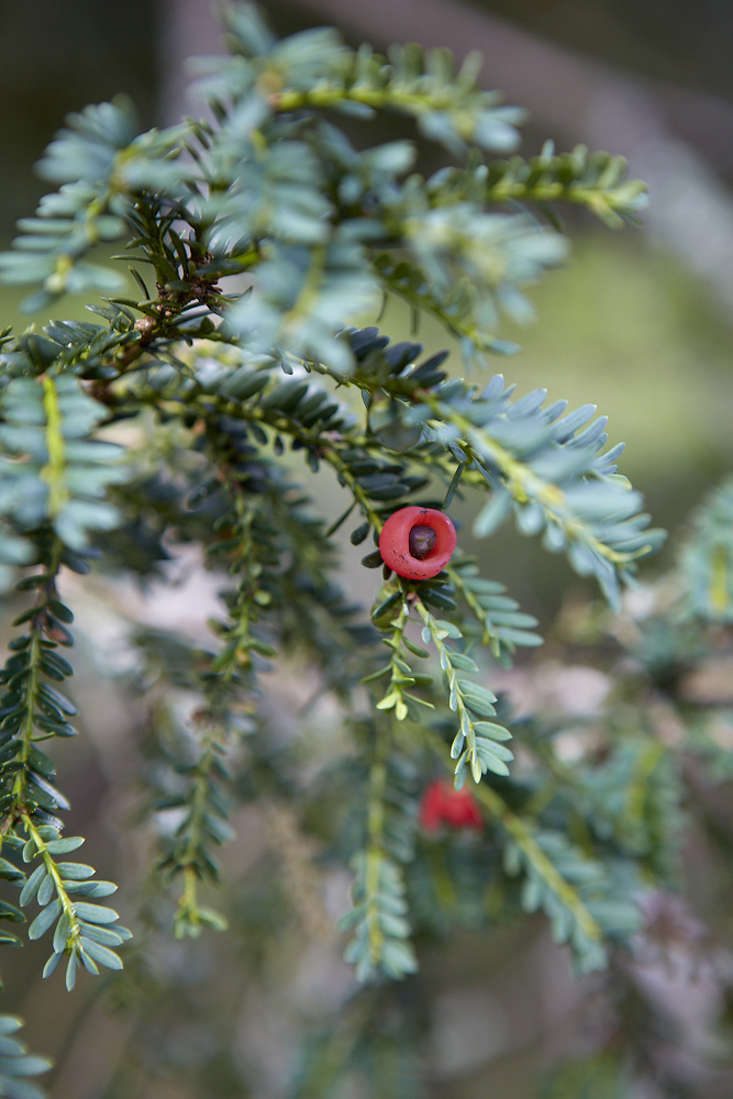 Above: Unlike most conifers which carry their seeds in a cone, the seeds of yew are found in an open red berry.

From the point of view of design, fastigiate yew (known as Irish yew) is the better choice. At Chatsworth in Derbyshire, the Long Walk by the house is punctuated by tall blobs of Irish yew, emerging from a smooth low hedge. On the garden side of the walk, the same type of yew grows in its natural shaggy state, an invitation to the wilds of the garden and whatever lies beyond.

N.B.: Looking to landscape your yard? Begin with our Garden Design 101 guides: