There are few gardens that say “English” more than Sissinghurst Castle in Kent, which was purchased in the 1930s by the newly married Vita Sackville-West and Harold Nicolson. They loved it for its rusticity and surrounding farmland and were happy to incorporate the “country” feeling into the garden.

From an abundance of old roses to its innovative use of garden “rooms,” Sissinghurst is the 20th century garden that has had the most profound influence on English garden design. Here are 10 ideas to steal for your own garden. 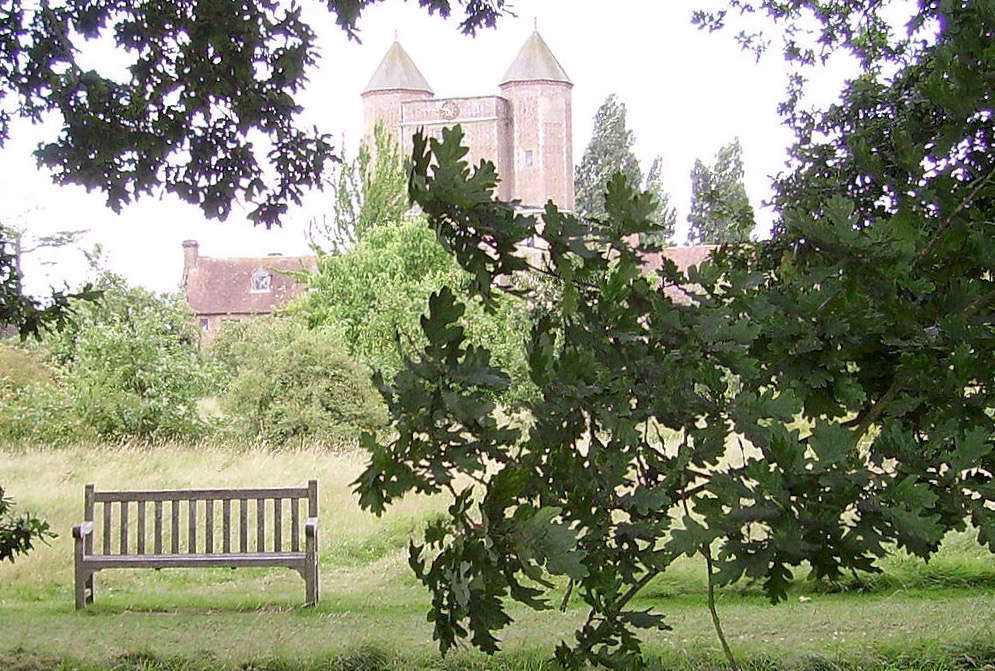 Above: Photograph by Immanuel Giel via Wikimedia.

The orchard was already there when Nicolson and Sackville-West bought the property. Today, mown paths encourage visitors to meander through the hay meadow planted under the trees. 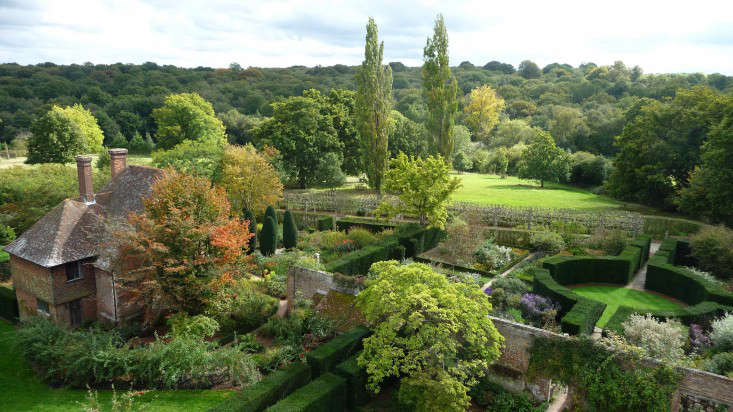 Above: Photograph by GraceKelly via Wikimedia.

If you split a garden into distinct areas, it looks just as interesting from above at it does from the ground. One of the features that drew Sackville-West to Sissinghurst Castle was the derelict Elizabethan tower. The garden occupies just five acres and you can see most of it–the nuttery, the orchard, and the white tower–from this tower. 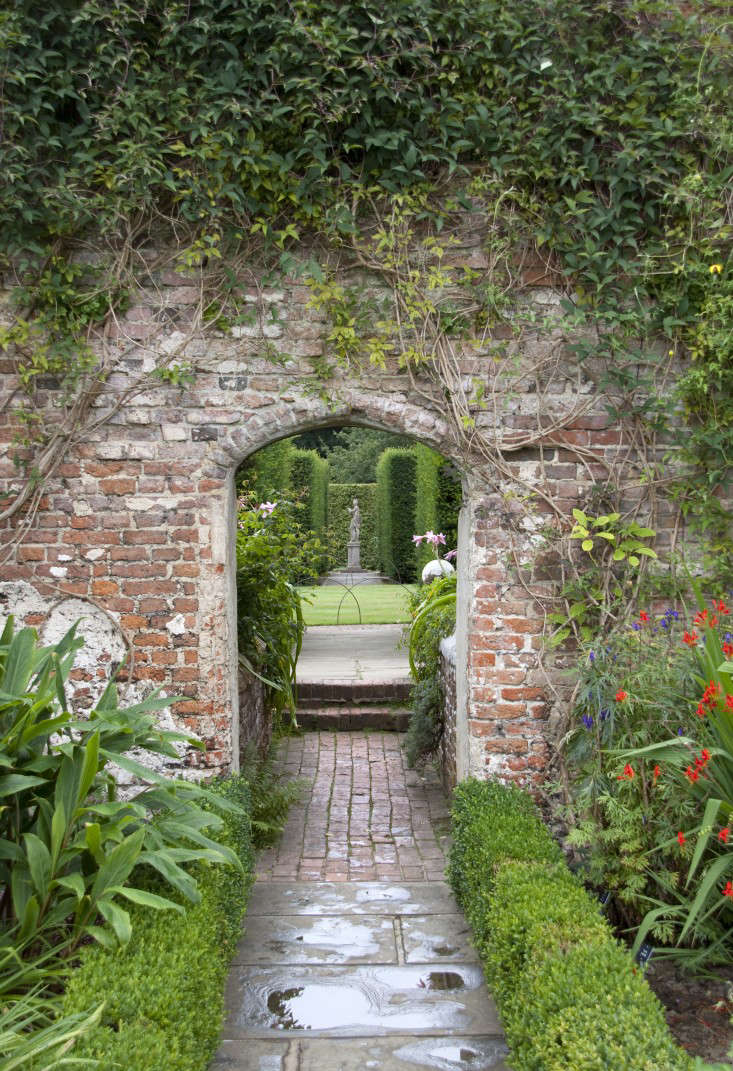 Above: Photograph by Tony Hisgett via Wikimedia.

Glimpsed through an archway or an open doorway, a well-placed sculpture draws the eye to distant reaches, making a garden feel larger and more mysterious. 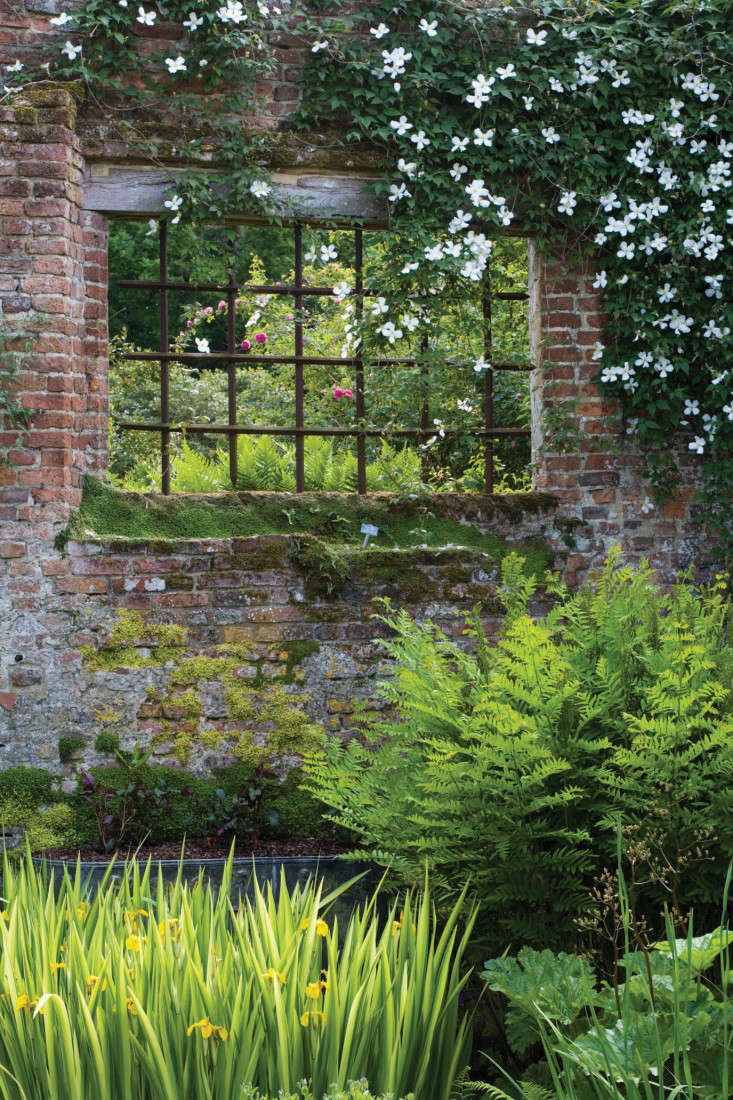 Catching a glimpse of another part of the garden through a window, either in a wall or though a hedge, can’t help but fill the viewer with curiosity. What’s in the next garden? Let’s find out. 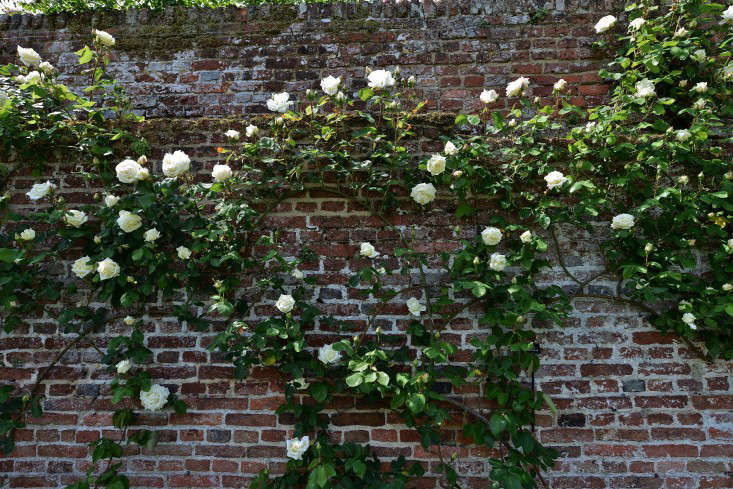 Above: Photograph by Michael Garlick via Wikimedia.

Sackville-West created a rose garden but also planted ramblers and climbers to grow up the beautifully worn red brick walls of the garden.

Loved for its roses, Sissinghurst attracts many visitors in June. Interestingly, the roses are trained in a very specific way here. If you visit the garden in March or April, when the structure of the roses is visible, you will see each branch has been curved slightly and pinned into place. It makes a kind of cloud pattern. Creating this added stress to each branch is what produces an explosion of flowers. 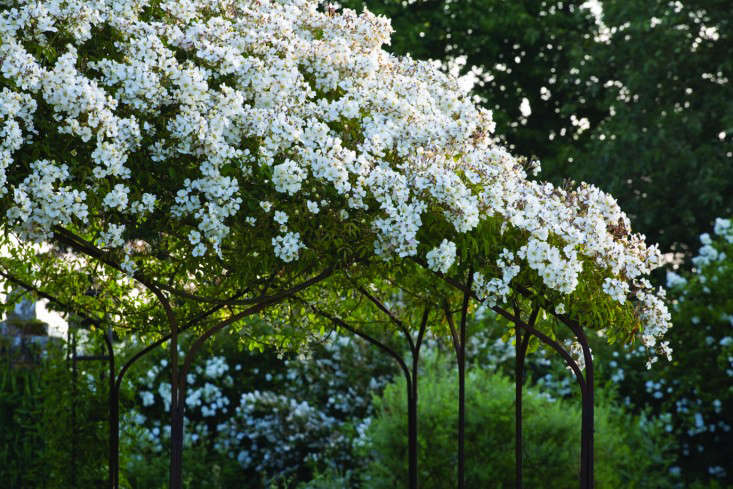 The couple lived in a sort of genteel poverty. Although Sissinghurst had the feel of a country estate, in reality they did much of the garden work themselves. The white garden was one place where Vita stamped her own style on the garden.

Sackville-West loved a garden to overflow with plants. “It’s cram, cram, cram, every chink and cranny,” she wrote on May 15, 1955. She did just that in the white garden. Parts of it are separated into individual areas using lines of box hedging. But each area is filled to the brim with white flowers, or overflowing with white and grey tinged foliage plants. 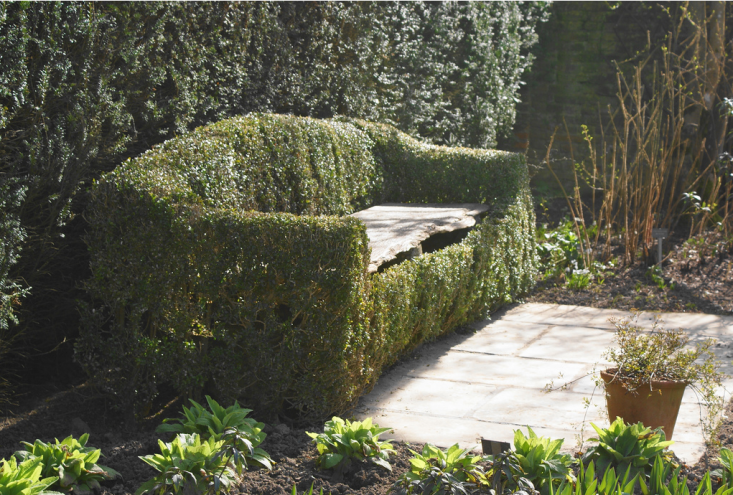 Above: A bench is made by pruning box hedging in the shape of a seat. Photograph via Sissinghurst Castle, which sells tickets to visit the garden from April through October for £12.05 per adult.

Sackville-West belonged to the Bloomsbury Group, an artistic group that had “love, art and the pursuit of knowledge” at its core. Her artistic character comes through not only in the plant combinations at Sissinghurst, but also in the playfulness of her topiary. 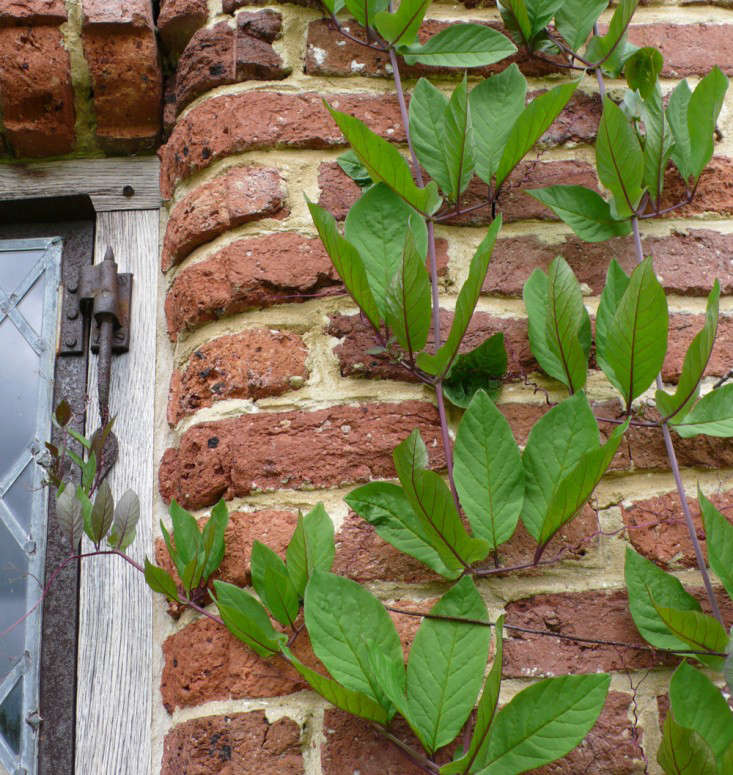 Above: Attention to small design details (like curved brickwork) brings the eye in closer. Photograph by Kendra Wilson.

In addition to a huge, semi-circular wall that features a beautiful purple-flowering clematis, curved walls appear in many places at Sissinghurst–from the intricate brick archways that lead you into the garden to the small details around the leaded windows. 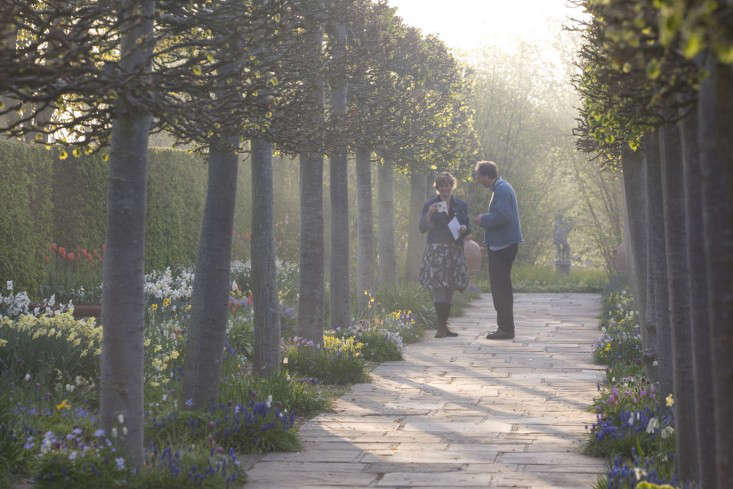 The lime walk is the only area of the garden at Sissinghurst that was both designed and planted by Nicolson. A long narrow passageway, it is flanked on both sides by lime trees that are pleached (trained with their branches spread flat but elevated on their trunks). In spring an abundance of spring bulbs emerge on either side of the path. It’s an interesting way to link two gardens together while still providing an enclosed walkway. 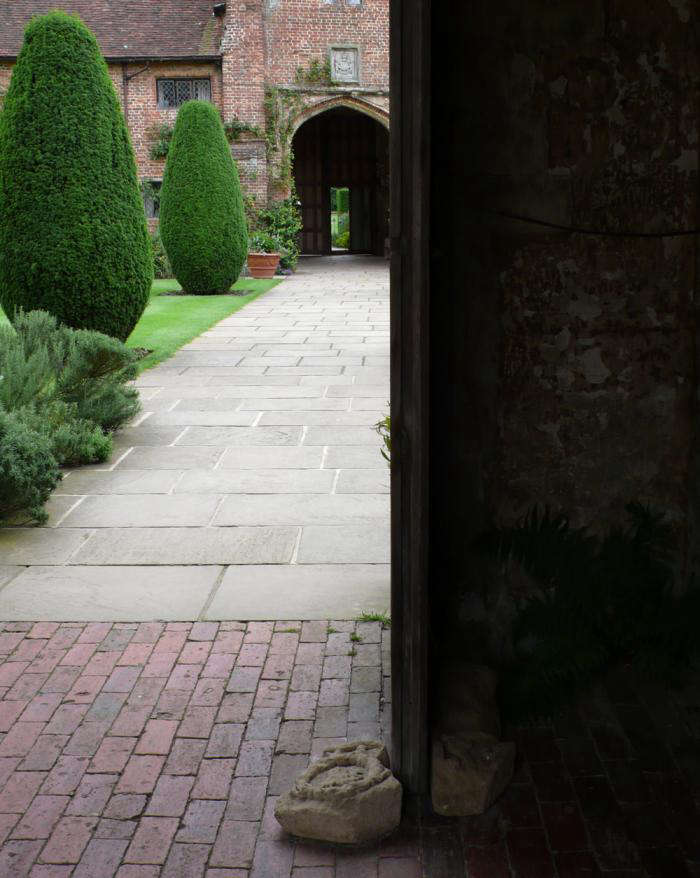 Sissinghurst has ten distinct garden “rooms” created by using old existing walls or newly planted yew hedges. When you enter one of the garden rooms, your exit is suggested by drawing your eye to an interesting vista, or sculpture in the next “room.” In this way Sackville-West kept your eye moving constantly on to the next thing.