A meadow, with its buttercups and daisies, doesn’t belong next to the house, does it? People expect something green and smooth, well-watered yet free of moss. When conditions such as drought work against us, we still persist, as though a perfect lawn is a basic human right.

For garden visitors, expectations are heightened, especially in a place like the British Isles where lawns were made famous and where drought is still relative. Perhaps this is why some visitors to Great Dixter in East Sussex have been so aghast at the sight of a meadow almost touching the front door that they’ve asked for a refund.

Meadows at Great Dixter and Beyond was originally published in 2004, written by Christopher Lloyd as a response to growing interest in the meadows around his home. Since his death, the idea of meadow gardening has grown in relevance, with drought becoming entrenched in areas of the world which had until recently been blanketed in green grass. A new look at Meadows, in an updated edition published today, is as timely as ever.

Photography by Jonathan Buckley, except where noted. 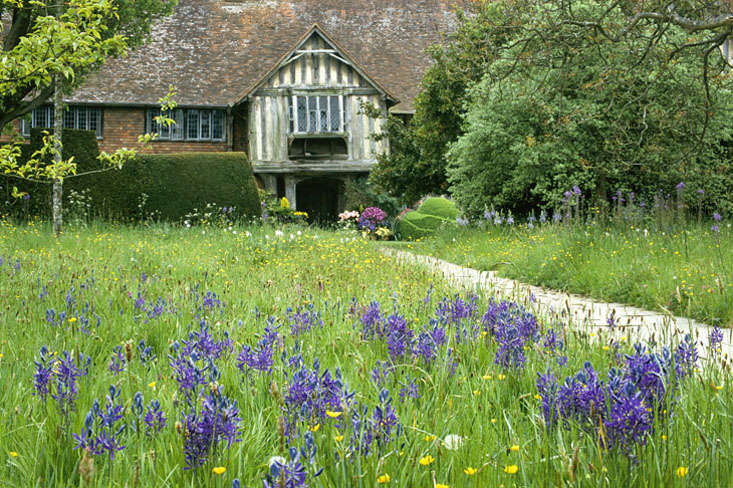 Above: At Great Dixter, a colony of Camassia quamash joins buttercups and dandelions in the lengthening grass.

The meadows came with the house: around 1912 they were established at the front and back by Daisy Lloyd, while her husband Nathaniel focussed on yew hedges and topiary. Their son Christopher extended the areas of rough grass, later including his father’s putting lawn, where the lifeless sward was allowed to run wild in summer. 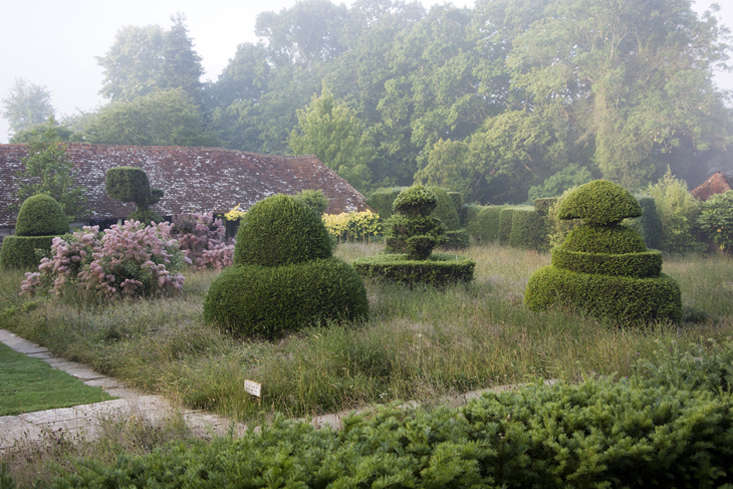 Above: Topiarized yews in an area once used by Nathaniel Lloyd for practicing golf. Photograph by Carol Casselden.

Now left alone during the growing season but smartened up in early autumn when the yew shapes are trimmed, the poor soil in the Topiary Lawn was already ideal for establishing a good balance of grass and wildflowers. The introduction of semi-parasitic yellow rattle, which weakens the vigor of grass, meant that more rarefied plants, like common spotted orchid, also made their homes there. 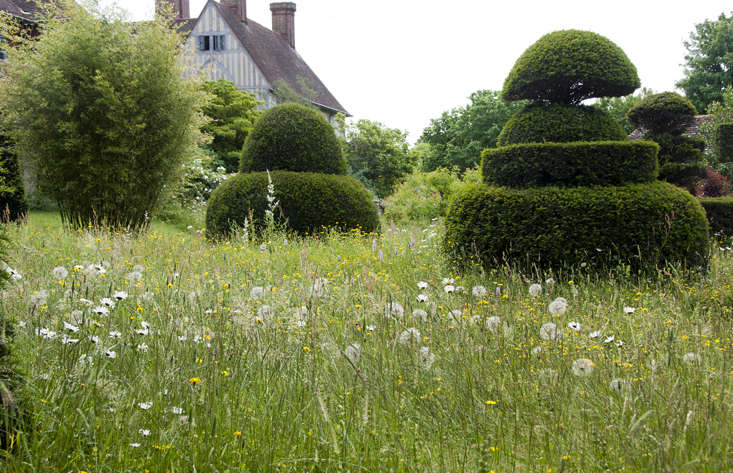 Above: The Topiary Lawn in early summer, which has not been consciously added to, is now a complex tapestry including not only thousands of orchids but meadow cranesbills, vetches, bird’s foot trefoil, and ox-eye daisies. Photograph by Carol Casselden.

“It was a great relief,” writes Christopher Lloyd, “when we allowed our topiary lawn to become meadow, to be able to contemplate dandelions with pleasure instead of resentment.” 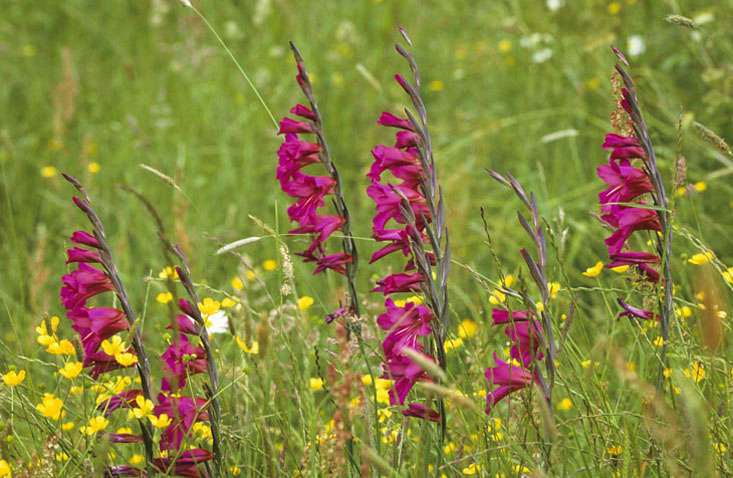 Above: Gladiolus communis susp. byzantinus is a more recent addition, in the grassy area overlooking the Topiary Lawn. A Mediterranean wildflower, it grows happily in long grass and rough ground.

“The simplest way to create a meadow is in an existing lawn,” writes Lloyd. Matching plants to the conditions a garden has to offer is the most important factor. In this comprehensive book, every type of meadow is discussed, from bulbs to the “cornfield scene.” 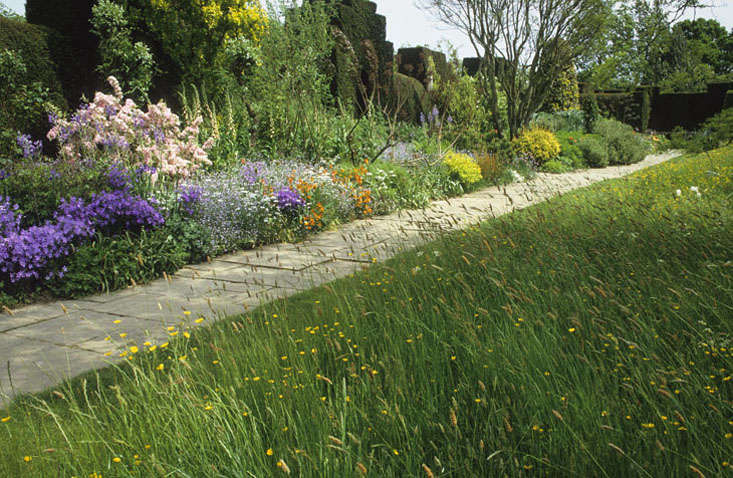 Above: Garden meets countryside directly behind the house at Great Dixter. A flagstoned path separates the intensively maintained Long Border from the orchard meadow, rolling away down an incline.

The aesthetic and conservational aspects of a looser environment are well-documented here, while Lloyd does take into consideration that this might not be for everybody: “You may need to convince your neighbors in advance of turning a lawn into flower-studded grass.” You may also need to convince ball-playing children.

Above: Meadows beyond Great Dixter. The ancient sward between Magdalen College, Oxford and the River Cherwell is a flood plain, with perfect conditions for an enormous population of snake’s head fritillary (Fritillaria meleagris). 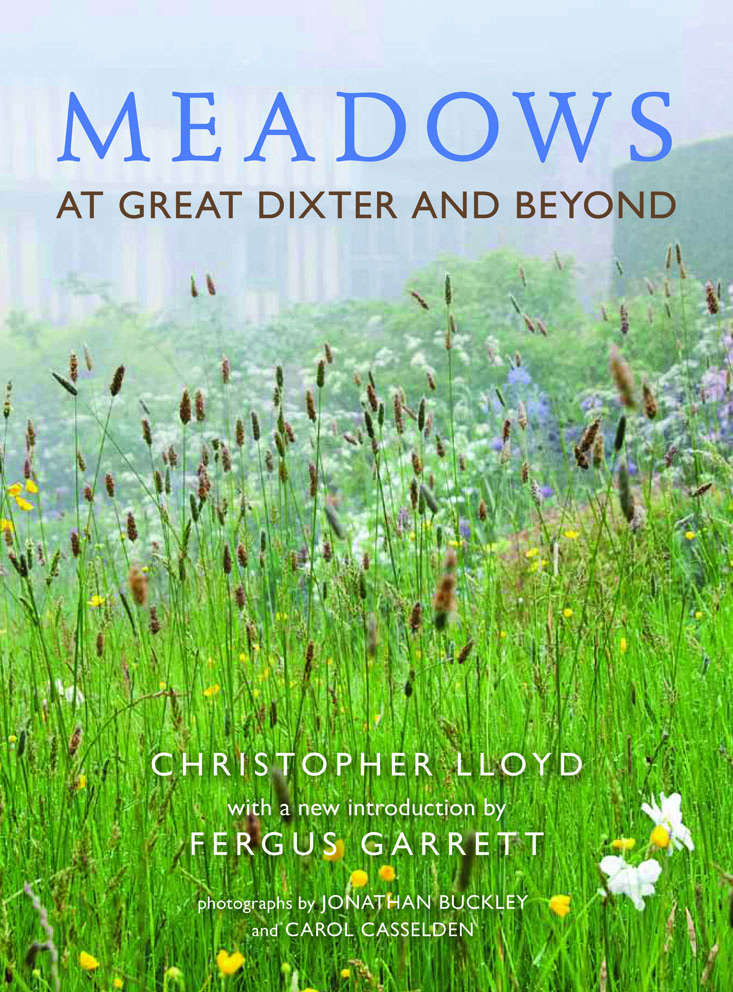 Above: Meadows at Great Dixter and Beyond published by Pimpernel Garden Classics is $45 at Amazon (and £30 at Amazon UK).

Meadows at Great Dixter and Beyond

Meadows : At Great Dixter and Beyond