In the forest highlands of southern Sweden’s Smaland province, you’ll find the garden and manor house of renowned Danish florist and artist Tage Andersen. Andersen is a polymath: sculptor, chef, designer, author, and the proprietor of a “floral boutique and museum” in Copenhagen. Gunillaberg is his ultimate vision. In a landscape of pastures, ravines, streams, ponds, and fields, it’s home to farm animals, topiary courtyards, an orangery, and sculptures made by the floral artist himself. 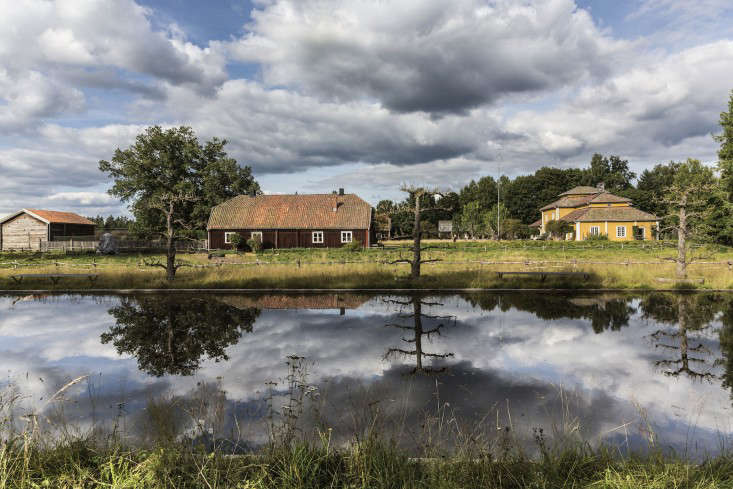 Above: A view of the Gunillaberg estate, seen from the fields across the pond. The yellow manor house (at right) was built in the second half of the 17th century by Johan Printz–who went on to become the third governor of New Sweden, the Swedish colony in what is now Delaware. 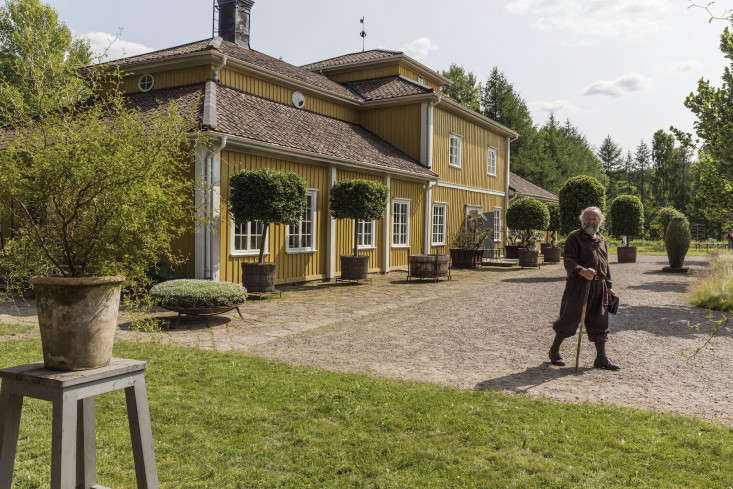 Above: When Tage Andersen (shown here) took over the property in 2008, he renovated the manor house entirely, and started his overhaul of the gardens.

Above: Weeping trees form a backdrop to tailored topiaries at the entrance to the manor. Photograph by Lena Frisk. 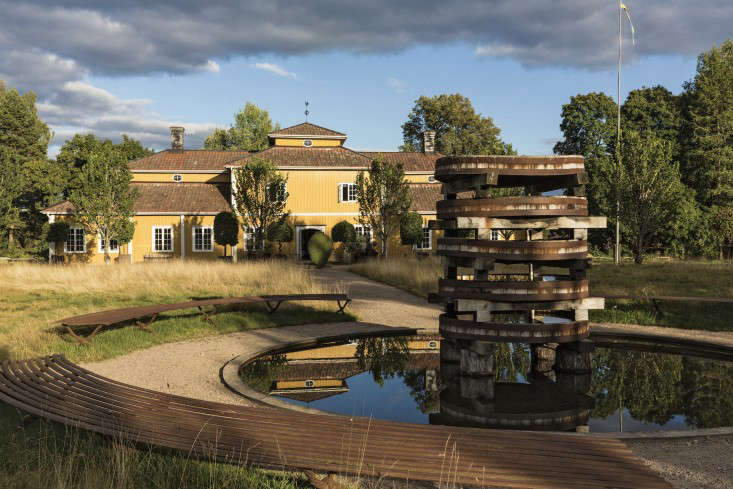 Above: One of Andersen’s sculptures floats in a pool outside the manor. Inside, Andersen exhibits works by a number of artists. 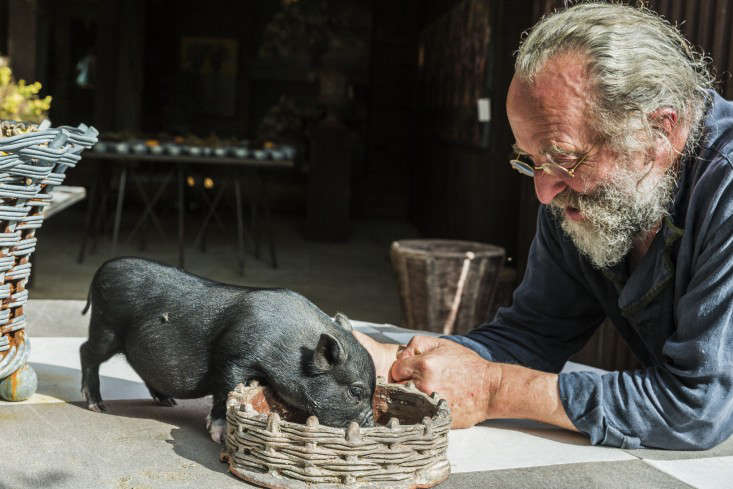 Above: Andersen, shown here with a pot-bellied friend, opened his first floral shop in 1967, in his childhood town of Kjellerup, Jutland. Today, he has a magical shop in Copenhagen filled with flowers, art objects and furniture that he makes himself, plants, birds, and bird cages that resemble artworks. 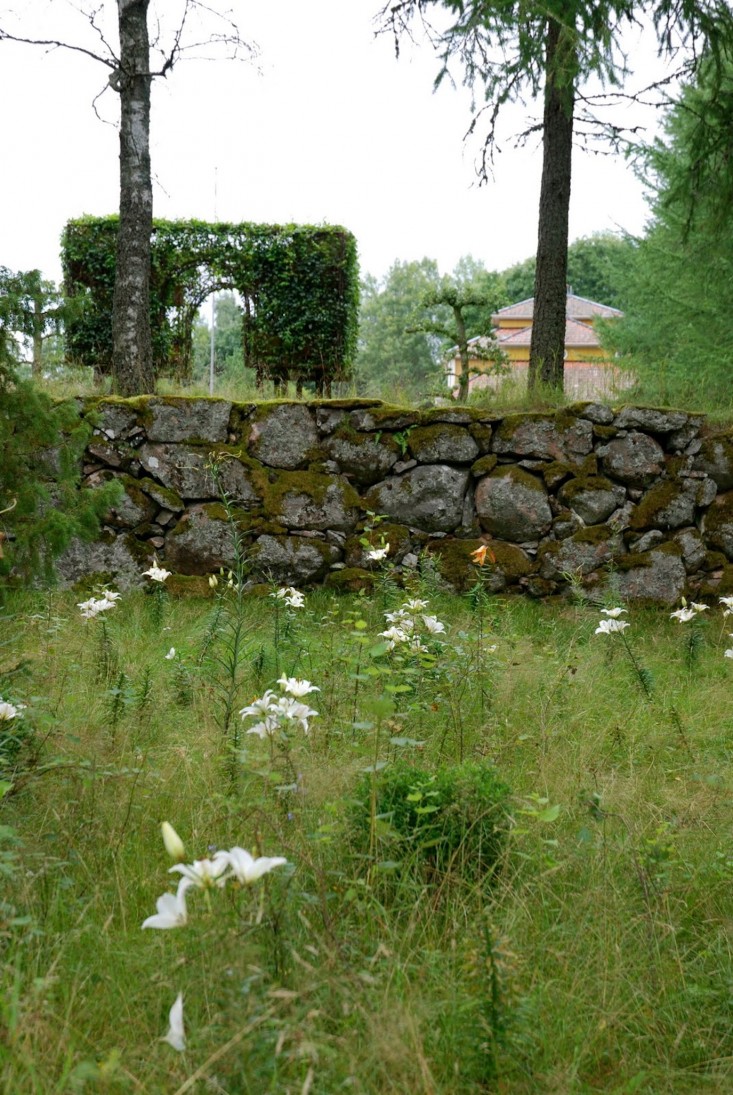 Above: Andersen planted more than a thousand lilies on the property. One of his topiary courtyards stands behind the stone wall. Photograph by Teija Lisefors.

Above: Another topiary courtyard, this one covered in flowering passion vine. Photograph by Lena Frisk.

Above: Overgrown topiarylike plants line the path to a red building that’s used as a shop and gallery. Andersen trained as a pastry chef, developing a perfectionism that’s evident in his floral designs, which are both tailored and lush. Photograph by Lena Frisk.

Above: Pots of agapanthus outside one of the art-filled spaces. Photograph by Krystyna and Eva from Floristmastarna. 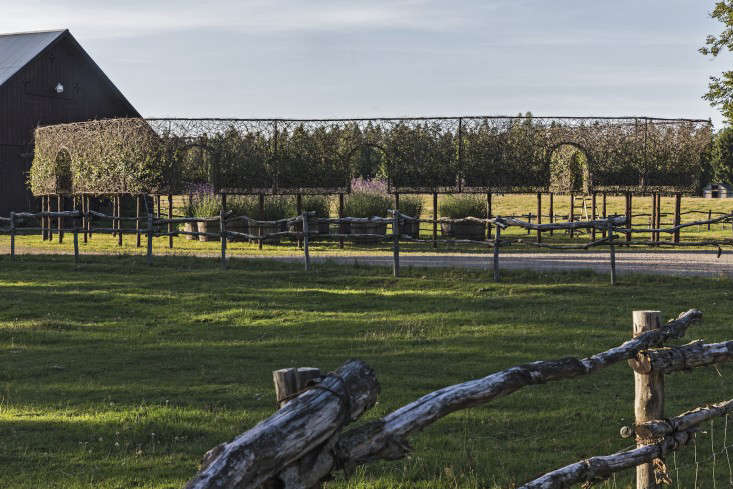 Above: One more topiary courtyard, this one beside the barn. 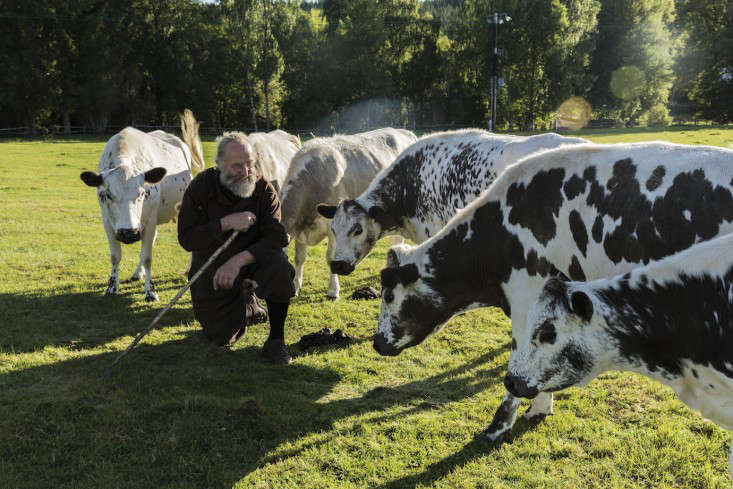 Above: At Gunillaberg, even the cows look like artworks. 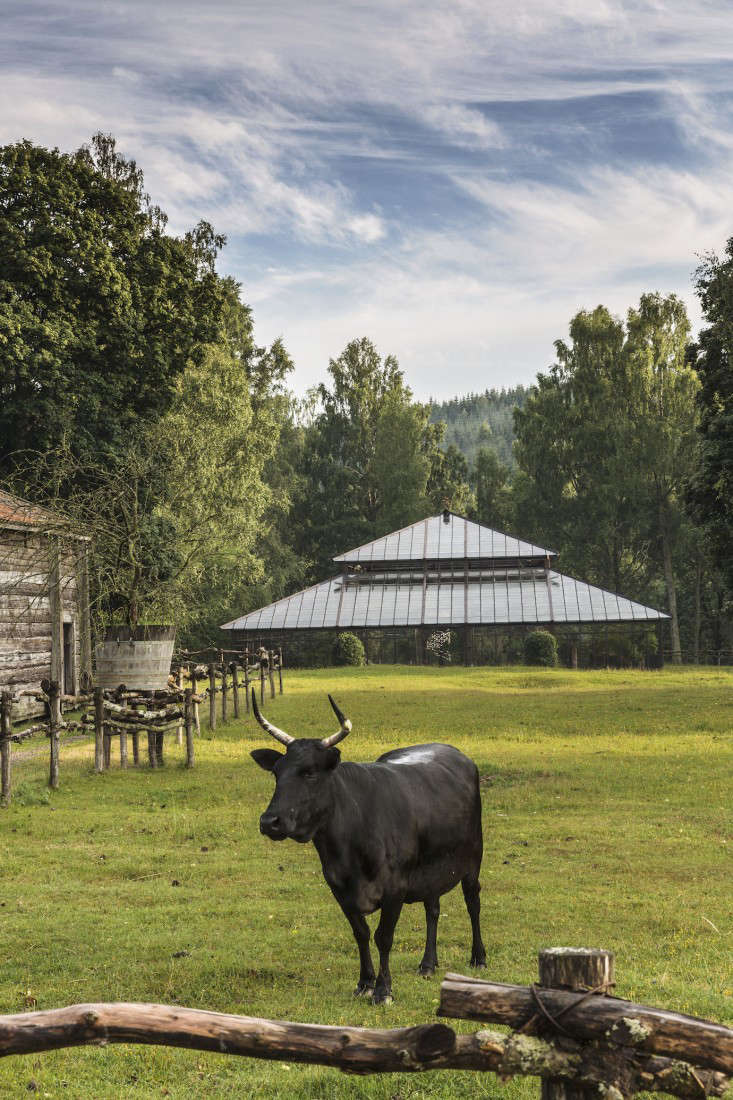 Above: The airy greenhouse-style building is used for lectures, concerts, and other performances. 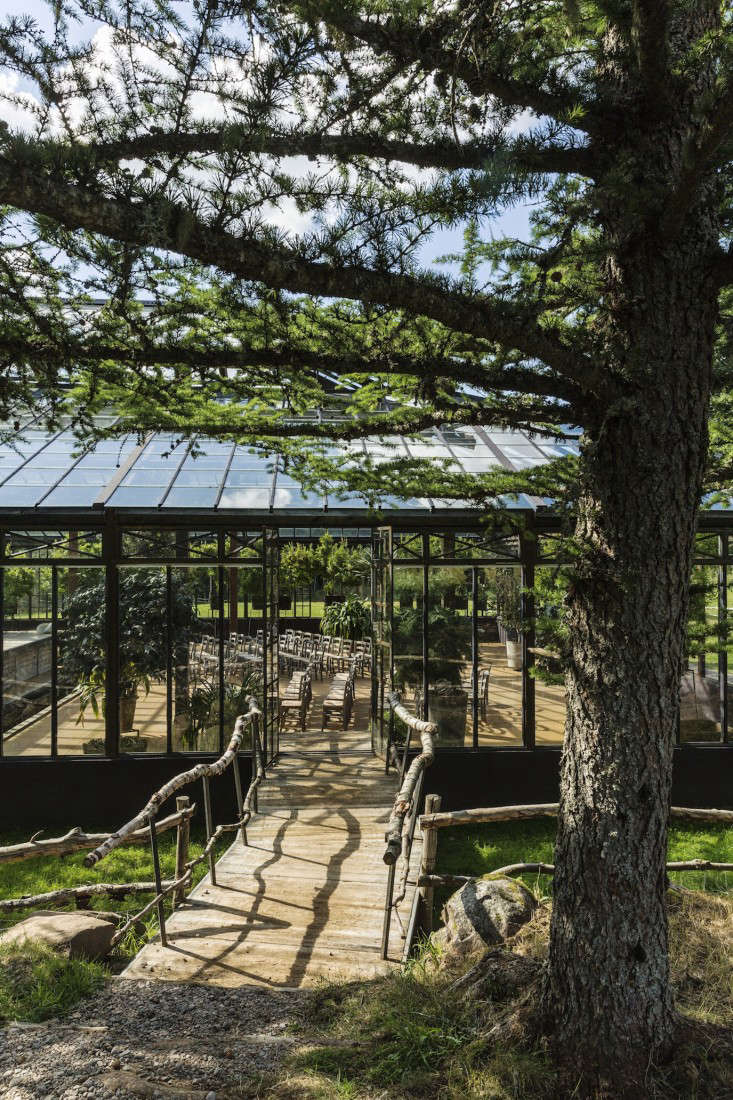 Above: Visitors enter by way of a wooden walkway lined with rustic railings. 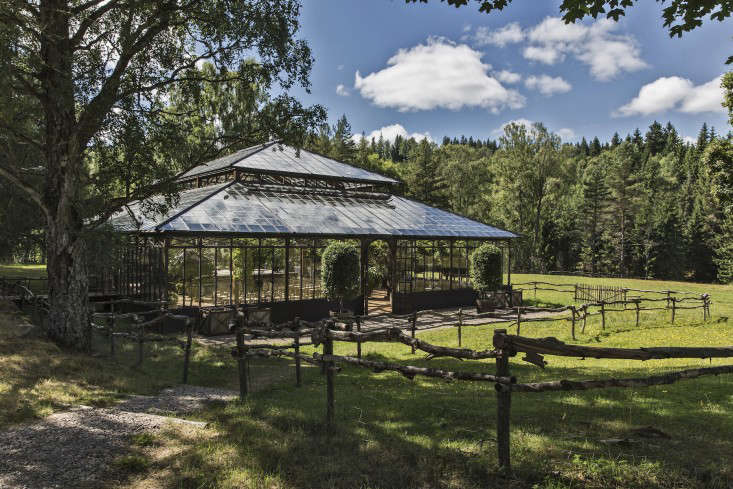 Above: Performances in the light-filled space begin at 5 pm, taking advantage of the long summer evenings. Opera, ballet, and classical music are on the schedule.

Above: A sculpted tree is one of his many whimsical artworks that adorn the property. Photograph by Lena Frisk. 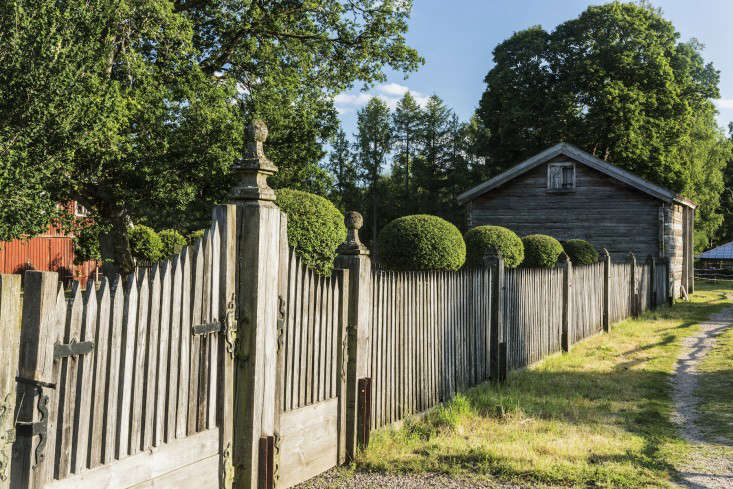 Above: Gunillaberg’s visionary owner has much more planned for this unusual property. We can’t wait to see what’s next.

The Gunillaberg garden is open to the public 11 am–6 pm daily from May 29th to August 31, and on Saturdays and Sundays in September. The entrance fee is $18. See Andersen’s website for more information, including directions from Stockholm and Copenhagen (the drive is about 3 1/2 hours from either city), hotels in the area, and a list of scheduled events.

For another European garden with its own quirky style, see A Magical Garden Where Clouds Grow on a Hillside in Provence.

Composting: Are You Obsessed?

10 Garden Ideas to Steal from Scandinavia

Trending on Remodelista: Denmark by Design