Behind a tall wrought iron fence in Red Hook, Brooklyn, a drift of near-black columbines stopped me in my neighborhood tracks, recently. On the corner of Summit and Columbia Streets, just a long block from the gantries guarding the port life of the Red Hook Terminals, the Summit Street Community Garden’s unscripted prettiness belies its roots as an abandoned lot, filled with rubble, derelict refrigerators, and rusting car parts. 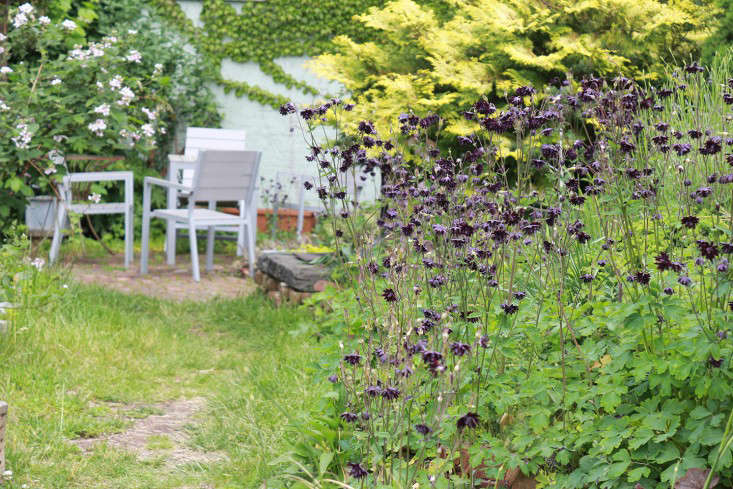 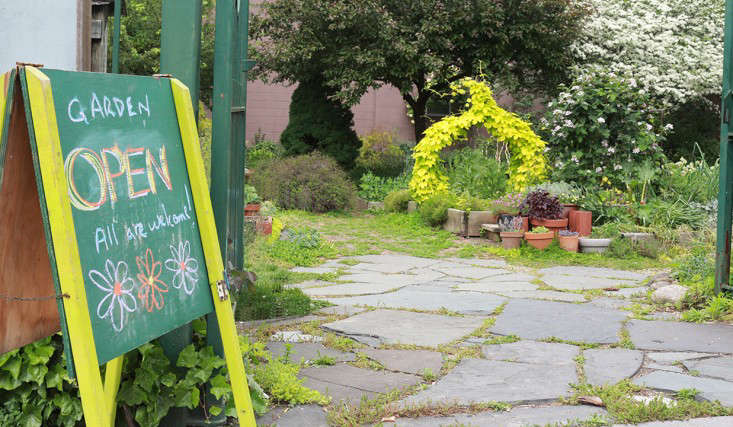 Above: The gate was open, and a welcoming chalkboard drew me in.

The striking arch was created by Claire Merlino, one of the Summit Garden’s main activators, who has gardened here since 1993, when it was transformed by community action from wasteland to garden-park.

Why grow regular hops if you can choose Humulus lupulus ‘Aureus’ (try saying that fast, three times)? Its luminous leaves are wildly ornamental and the perennial vines are hardy to USDA Zone 3 (yes, you can use the female inflorescences to brew beer). 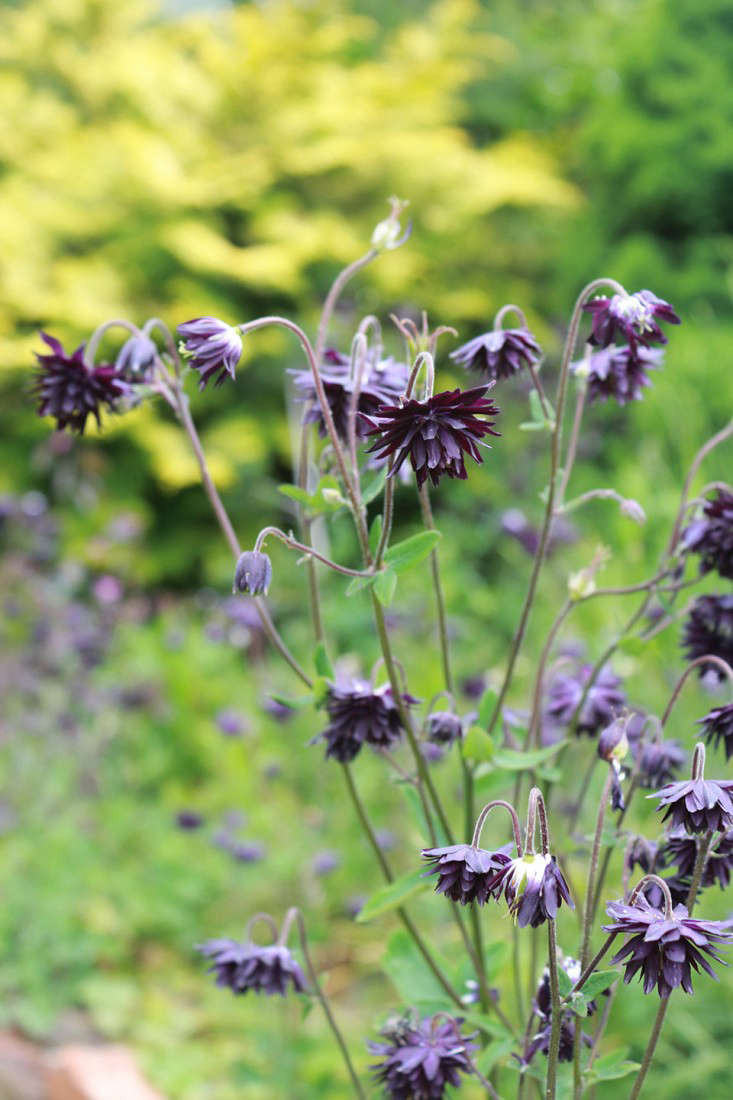 Above: The naturalized columbines that drew me into the garden are probably Aquilegia ‘Black Barlow.’ The inky flowers are particularly effective against yellow and lime backgrounds – the Chamaecyparis planted way behind them is a happy choice.

Claire explains that some interesting plants arrived in the garden by way of two participants (she avoids the word “members”—“too clubby,” says Claire, one of the garden’s coordinators) who worked for Martha Stewart and who staged photo shoots in the space. The magazine paid the garden in fees as well as in plants that “enlivened what was here,” says Claire, whose background is in garden design. 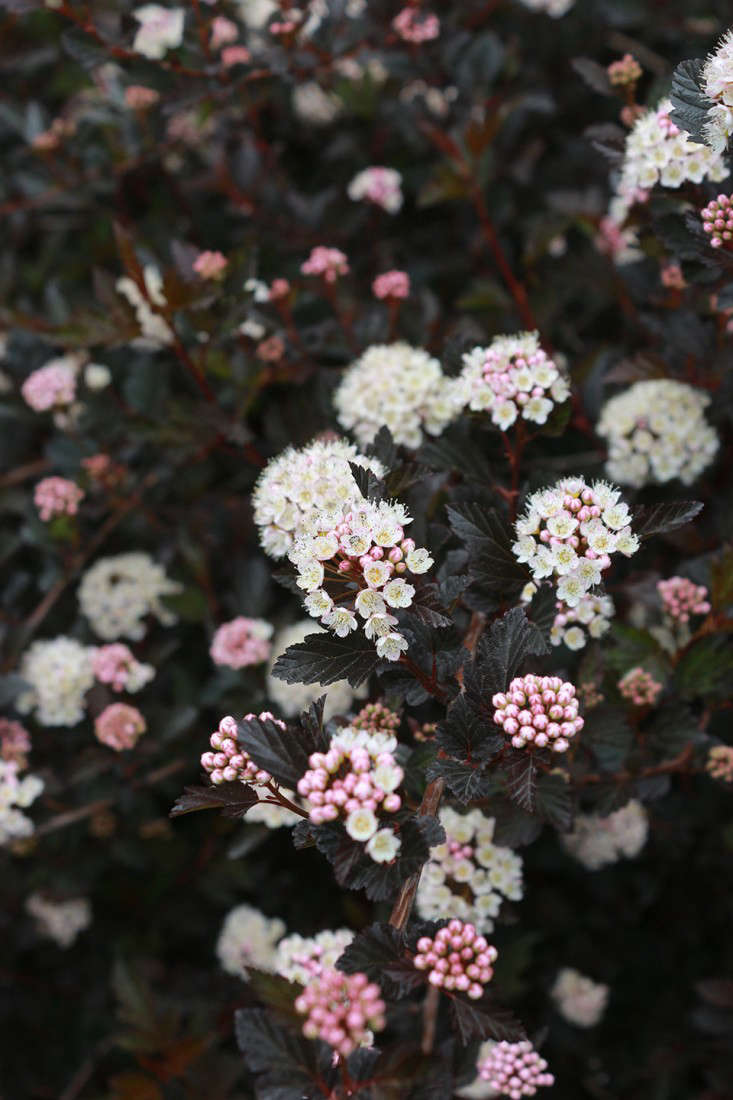 Above: The dark leaves of Northeast native ninebark (Physocarpus opulifolius – probably ‘Diabolo’) provide a rich contrast for its abundant white flowers in late spring. As a backdrop in a wide border, the chocolate foliage of this cultivar works for the rest of the year as a foil for perennials planted in front. 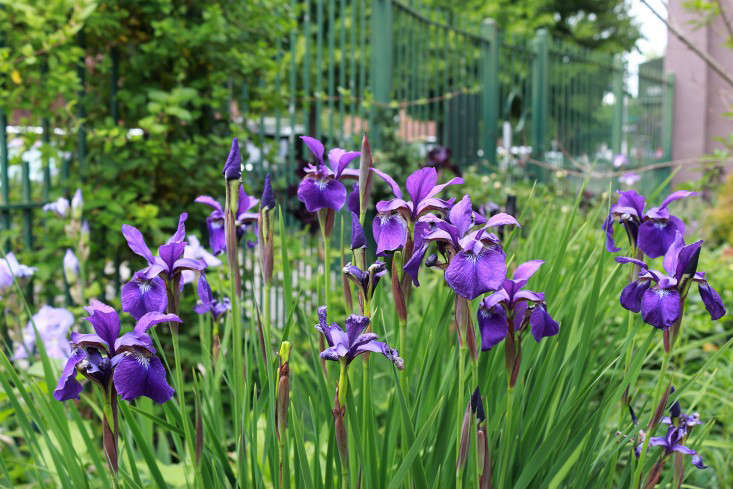 Above: A clump of low-maintenance Siberian irises forms part of a sunny bed. Garden members (sorry, Claire!) may add plants as they like, while big decisions are discussed at monthly meetings in the garden and online in a private Google group. Work in the garden is shared by the most active of its 70 members. 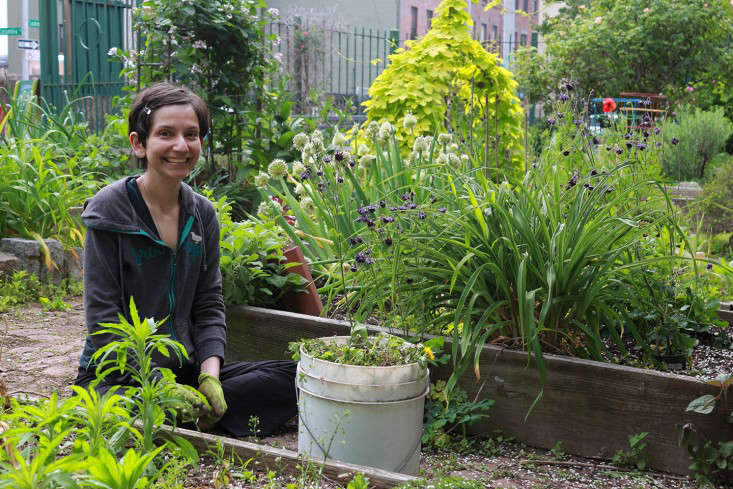 Above: On a quiet day there was no one in the garden but Josie Rubio, pulling copious weeds from the brick path. Honeybees buzzed in the flowering hawthorn, nearby. She joined the garden in 2009, after a move from Ohio, and says, “From the first meeting, I felt really welcomed by the other members, and I was struck by the sense of community.” Asked how she feels about weeding, a chore most gardeners dislike, she responds, “I find myself thinking about positive things. There’s something so therapeutic about sitting on the bricks warmed by the sun and being so close to the earth and the smell of the grass and soil. It makes me feel like everything is going to be alright.” Within the past three years, Josie has had two different types of cancer, and says, “I feel like gardening is one of the things that helped me deal with everything.” 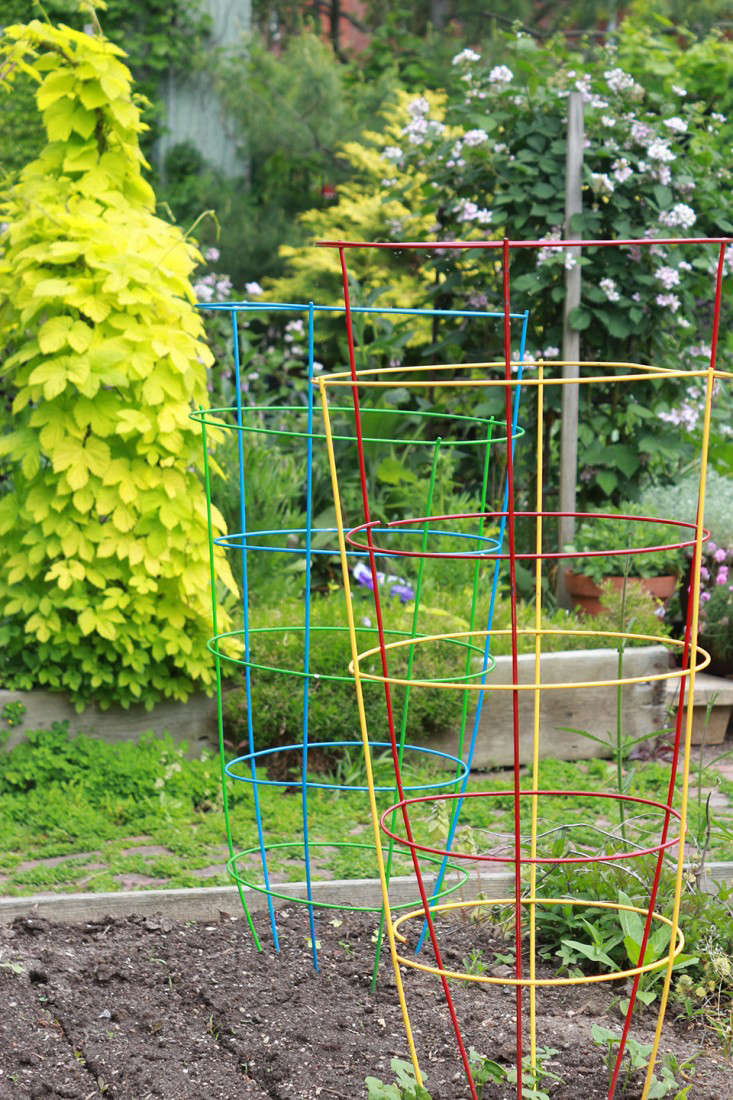 Above: The size of the raised beds— 4 by 8 feet—in the garden was set by the length of the wood available from Green Thumb, the New York City Parks Department program that provides support for community gardens. These raised beds are allocated to gardeners according to a waiting list, with longer-standing participants gardening in full size boxes, while most boxes are shared. The local Red Hook Playgroup has a full-size box, where a teacher and group of three- to five-year-olds garden. “There was barely a child in the neighborhood,” says Claire, when the garden began. “Barely any dogs, no nannies, no double strollers.”

Above: After gardening in a full-size yard in Ohio (“having a yard is probably one of the things I miss the most”) Josie adds that the community garden plot is much more manageable, for a busy New Yorker: “I get to enjoy the beautiful garden without having to maintain the entire space!” And it gave her the time to create a new website for the Summit Street Garden. “That is something that I really love,” she says. “How every member can choose the way he or she wants to participate and how they can best contribute their individual talents.” 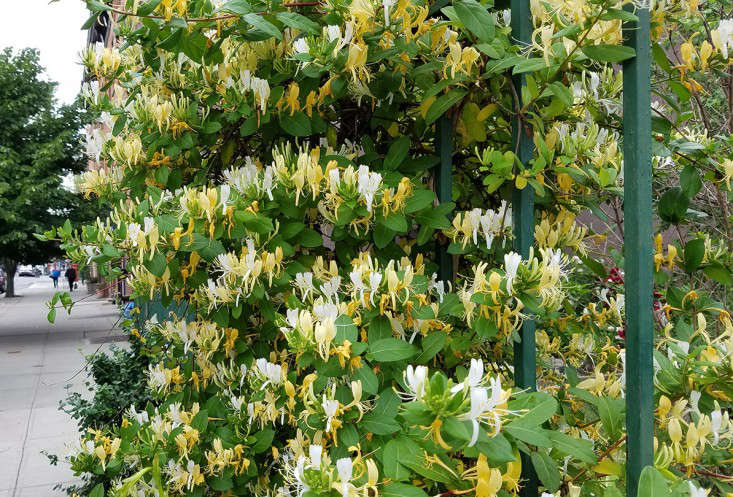 Above: “I’m used to being able to talk to your neighbors over a fence while you’re in the yard,” says Josie, “so I love that the community garden can give me that experience.” Red Hook is not Ohio, but here the fences are friendly and perfumed with honeysuckle, and the sweet flowers are an antidote to the occasional old-sock smells wafting from the open holds of cargo ships docked nearby. 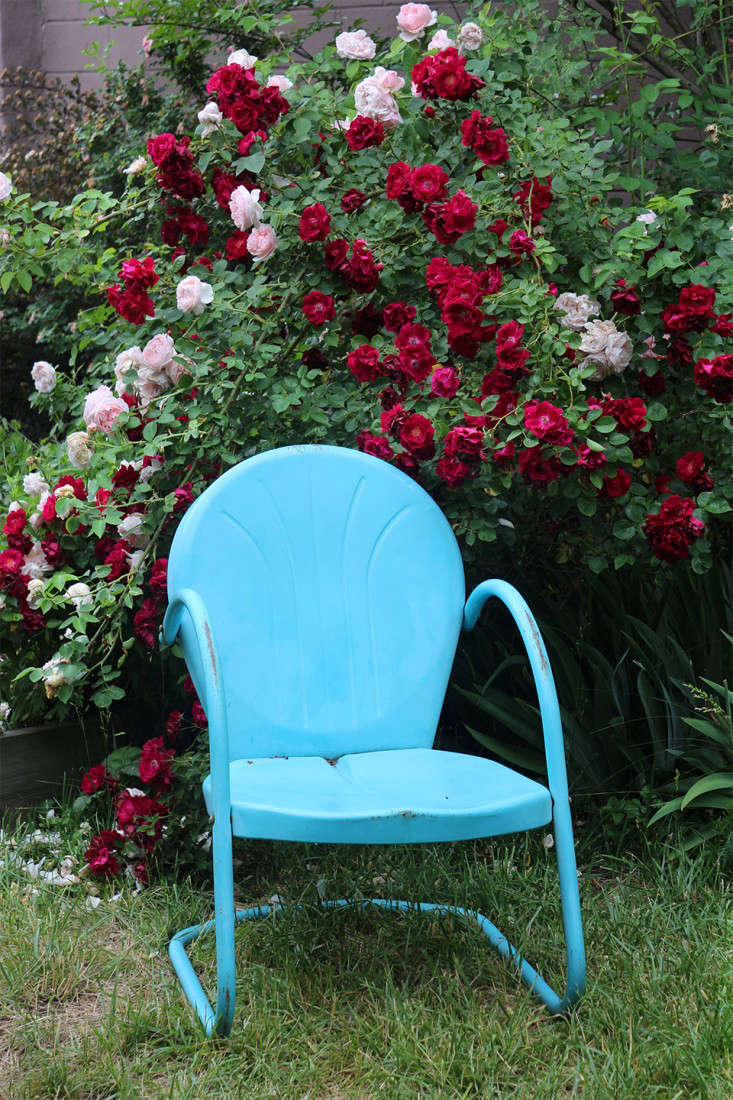 Above: Garden sitting is what it sounds like. Green Thumb requires its community gardens to be open to the public for 20 hours a week from April through October, and volunteers are needed to garden sit during those regular open hours. There are worse places to be, in rose season. Josie sums up: “By the time I’m done with a garden shift, the person who didn’t seem like she had time to be outside just a few hours earlier seems like a stranger. Whenever I spend time in the garden, I never leave thinking I should have done anything else.” 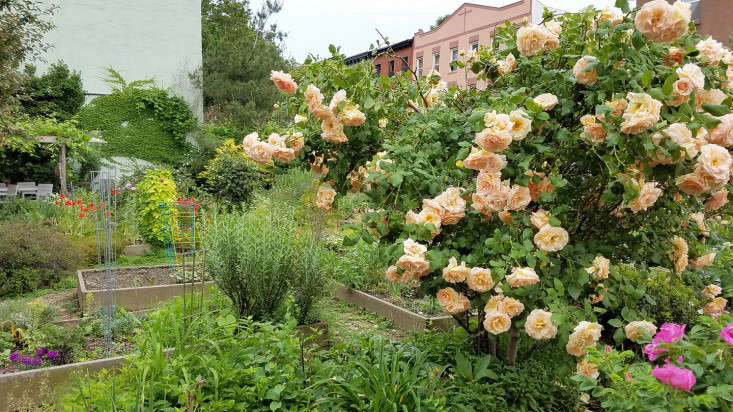 Above: Heavy with scent in its first flush, this towering rose bush is a refugee from upmarket Westchester. Originally planted by Claire in an expansive garden for a client, it languished there for years, getting black spot “and barely expanding.” She moved it to the Summit Garden without any expectations; it was the first rose that she had ever transplanted. Twenty years later it is thriving. “And not a spot of black spot, since,” she adds. The rose is top-dressed with the garden’s own compost and doused with Epsom salts three times a year. 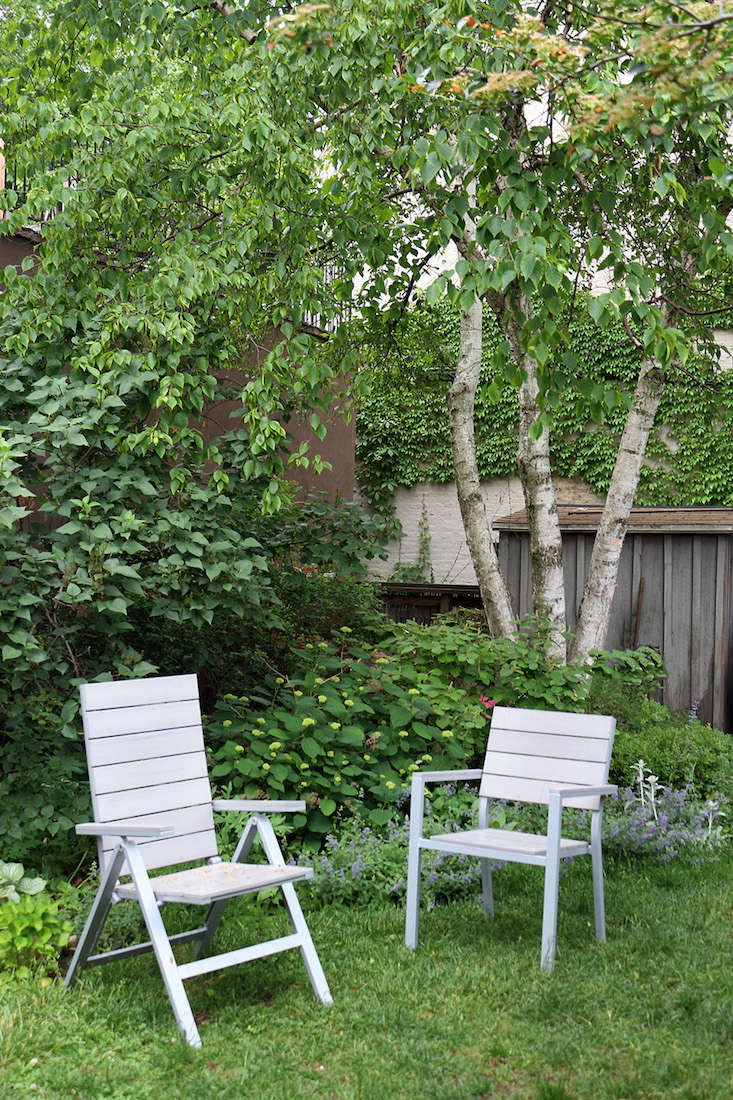 Above: A peaceful and shady corner beneath a tall birch is a transformation. This part of the old lot was five to six feet below grade, when work started. Over one summer Claire and her fellow garden activators acquired clean landfill from building contractors and filled it up. It is now home to a tool shed and the compost pile, and is the coolest corner on the hottest days that New York can offer.

The garden is open to its members at any time, for plot-tending, for grilling, garden parties, or reading a book—there is a lock on the gate, for which they have the combination. The caveat is that if they are in the garden the gate stays open to the public. Community engagement is a priority. 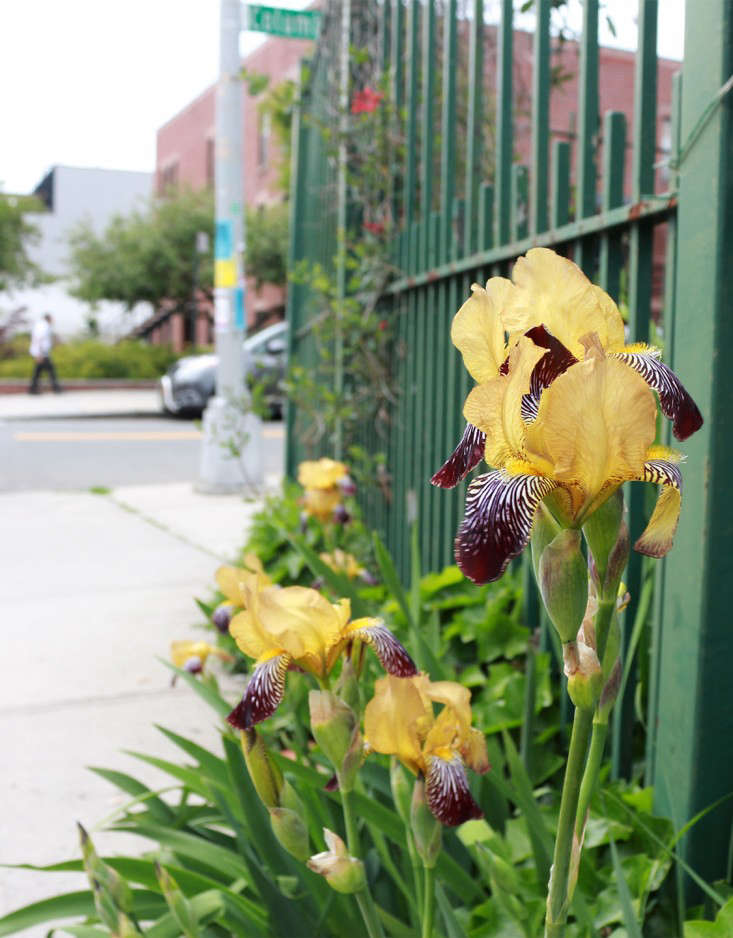 Above: Irises spill from behind the open fence onto the sidewalk. They illustrate what Claire says gives her the most pleasure about the garden: “The community of it, the street interaction, being in touch with neighbors. Not doing everything behind closed doors; that is not what community gardening is about. We are the stewards of these plants.”

Are you gardening in a city? For inspiration, see more of our favorite community gardens, including A Family-Friendly Vegetable Garden (Chickens Optional) and Jo Malone’s Fragrance Garden in Brooklyn.