On a swelteringly hot summer day we asked Louesa Roebuck, a Renaissance woman and renegade floral designer, to create summer bouquets for us. The perennial rule breaker (whose clients have included Chez Panisse) raided her friend Lauren McIntosh’s lush Berkeley garden and some nearby trees to create two offerings: one fuzzy, wild, and green; the other fresh and floral.

While all the components were sourced in Northern California, substituting similar elements from your own locale will work just as well. For Louesa, it’s all about creating a mood in the moment with whatever is on hand. 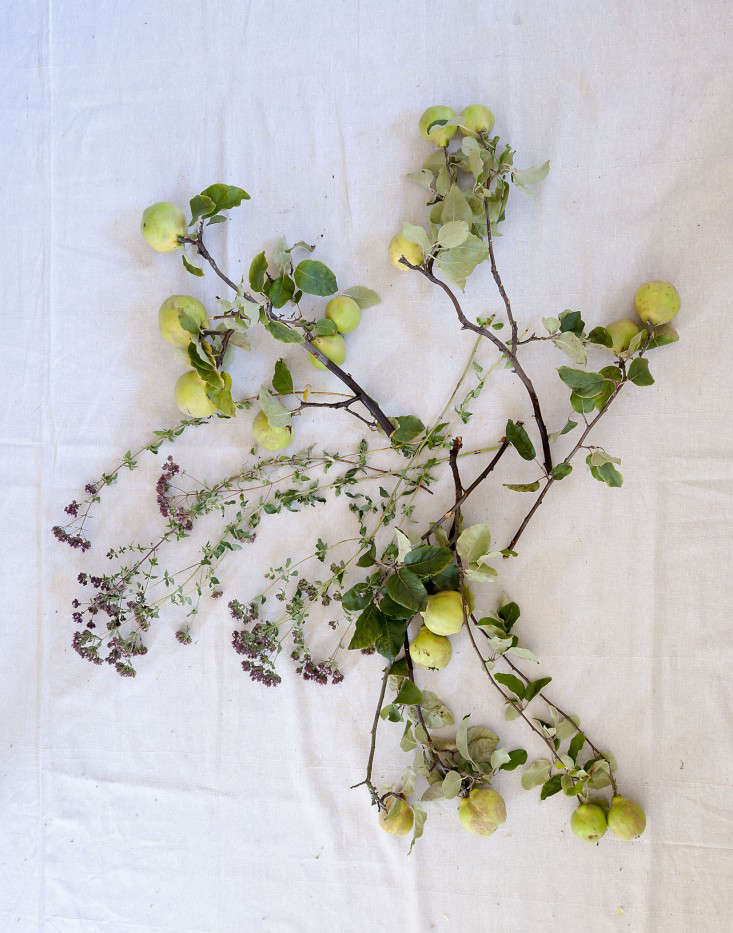 Above: Branches of quince and oregano stems. To these Louesa added branches of pears, grapes, and grape vines. “I found the quince in a tree in an abandoned empty lot where the Oakland fire was. Someone never rebuilt, but the tree survived,” Louesa says. “Quince’s fragrance is one of my favorites, and it will stay in the house. The leaves will drop, but you can mist them. I wanted this whole bouquet to be edible, which is why I used the oregano and grapes.” 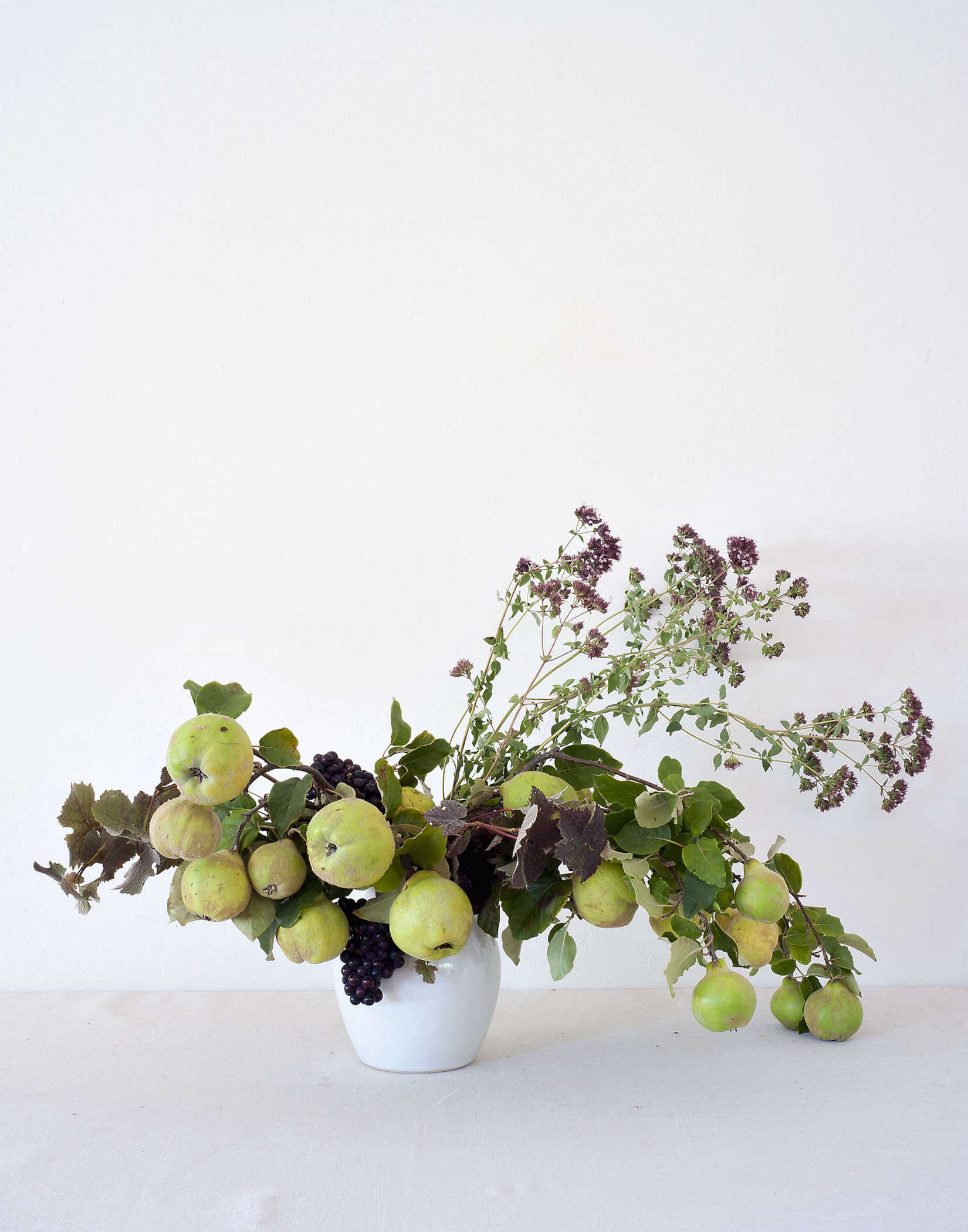 Above: “I am very taken with the fuzziness and shape of the quince, and the color is so beautiful with the dark grapes and the oregano that has gone to seed,” Louesa says. “Part of the appeal is the way the dark grape leaf comes through and the oregano that’s tall and leggy–it’s an unexpected element. Herbs are really good at adding a note of wispiness. They’re not tameable and have their own form, so they make things wild. And it’s the wildness that makes it work–that and the fact that it’s only one herb. If it had been three, the arrangement would have been too busy.” The vase is by Kelly Farley of Pope Valley Pottery. 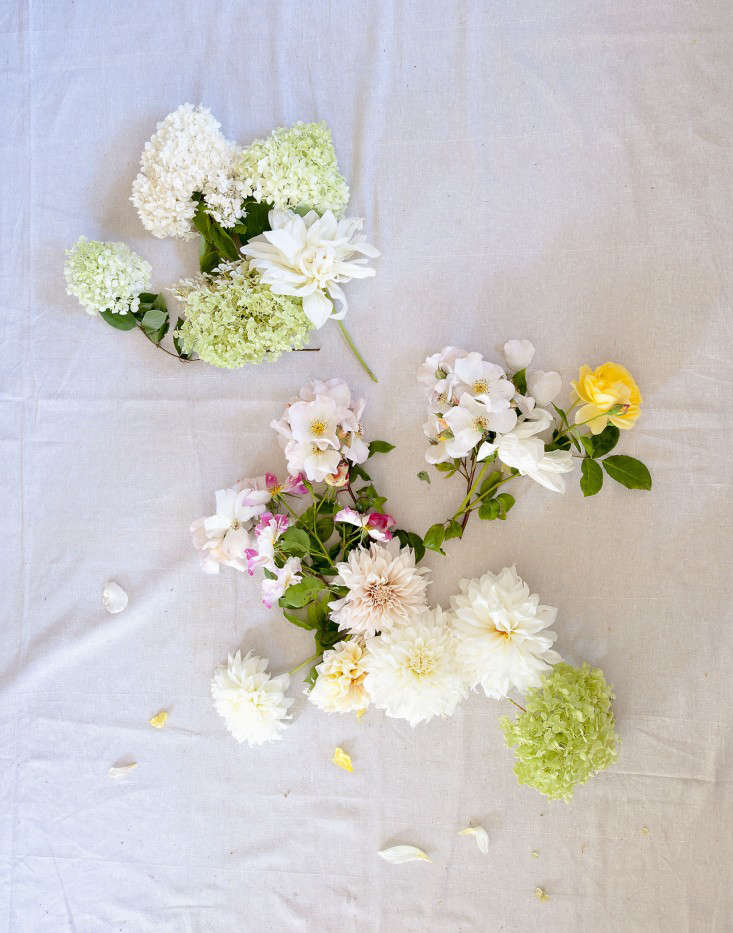 Above: “I am not a dahlia fan, but these are pretty,” Louesa says. “I don’t use hot or yellow dahlias–I think they’re ugly–I like them creamy, creamy; bloody red, or deep and moody purple. I also used a big, white magnolia, and oakleaf and viburnum hydrangeas from Lauren’s garden. They’re one of my favorite things to use. They do well even if you don’t put them in water–they look a little sad and dead for a while, but then they dry out. The white roses are Sally Holmes, very scented and beautiful and old-fashioned; the yellow roses are David Austin, which hold up really well.” 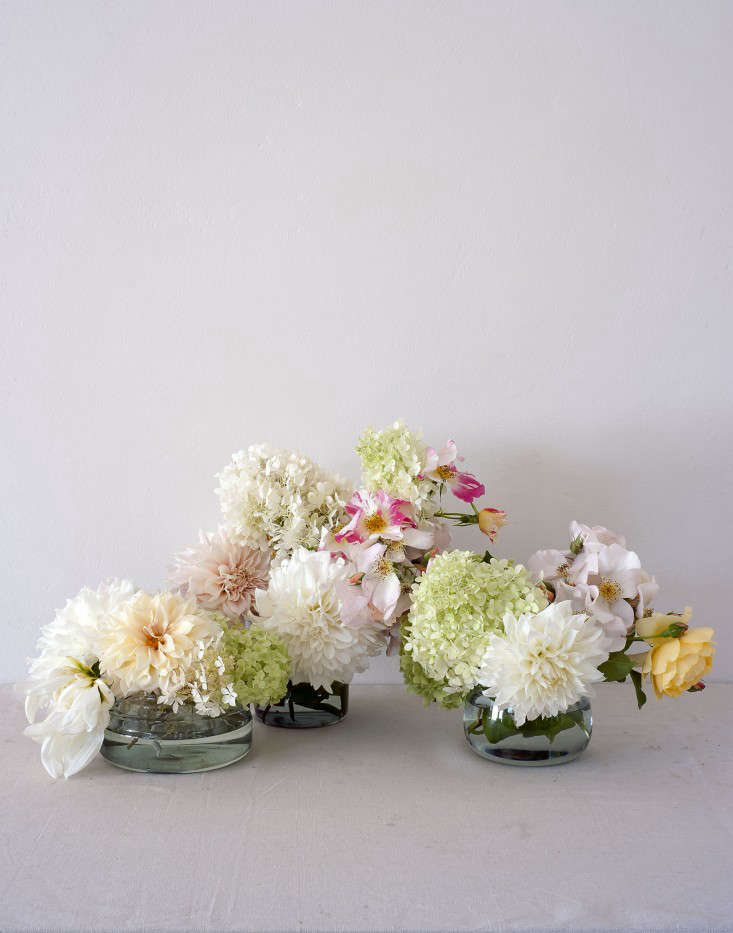 Above: Flowers displayed in industrial medical glass vessels from Ohmega Salvage. Louesa notes, “The components in this arrangement are much more conventional and pretty than the quince display. Hydrangeas and dahlias in glass is very English and dear and feminine…it’s sort of bridal and romantic and Bloomsbury. It’s my take on an English arrangement. I used three vases–I only do odds. I like it when they look like one organism–it’s three vessels but it’s one piece; they have a language together.”

To see Lauren’s garden, the source of much of this bounty, read our post on the Renegade Florist; also check out Louesa’s Foraged Ikebana Florals and Not Your Mother’s Rose Bouquet.