Italian landscape designer Monica Viarengo thinks constantly about genius loci, the spirit of place. After a couple with three young girls asked for a low-maintenance outdoor play space in San Francisco’s lively Mission District, she transformed their garden to reflect the artistic energy of the surrounding neighborhood.

At the heart of the design is a mosaic path laid with pebbles in a traditional risseu technique. To lay the path, which connects the front and back gardens, and to visually connect the spaces, Viarengo assembled a team of master craftsmen including a muralist, a mosaic master, and an expert contractor. “I’m always trying to find the identity of the place that I work,” says Viarengo, who practices in California and in Europe.

Read on to see how Viarengo and project manager Courtney Yeung transformed the garden: 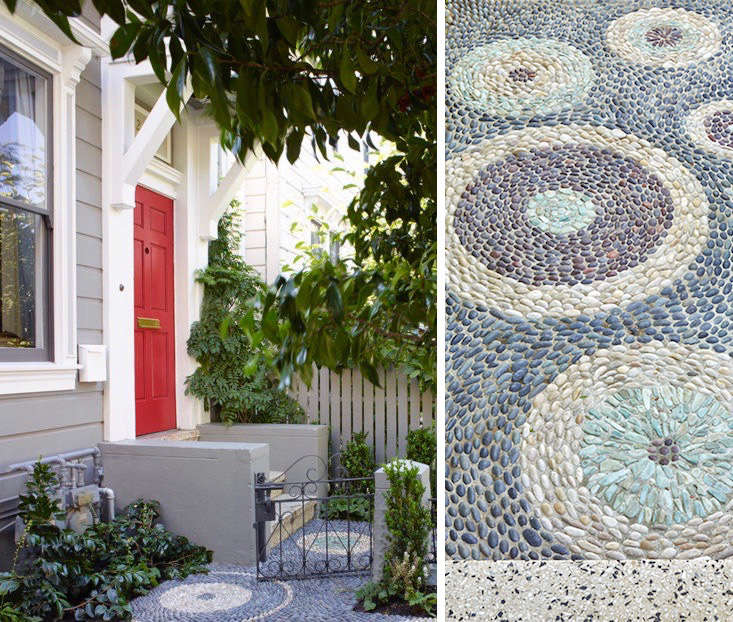 Above: Risseu is a traditional pebble-mosaic technique common in Genoa, Viarengo’s hometown in Italy. The first glimpse of it is in the front garden, visible from a busy San Francisco street.

On a trip back to Genoa, Viarengo contacted mosaic master Luciano Bonzini for technical information. He wound up agreeing to come to San Francisco to mentor her landscape contractor, Peter Good of Goodscapes, who was eager to learn.

The risseu features five main circles in two sizes, each different. There are five at the main entrance and then they scatter throughout the garden. “It’s a little private story,” explains Viarengo. She chose the risseu mosaic for its ability to be both elegant and joyful, for a play garden. 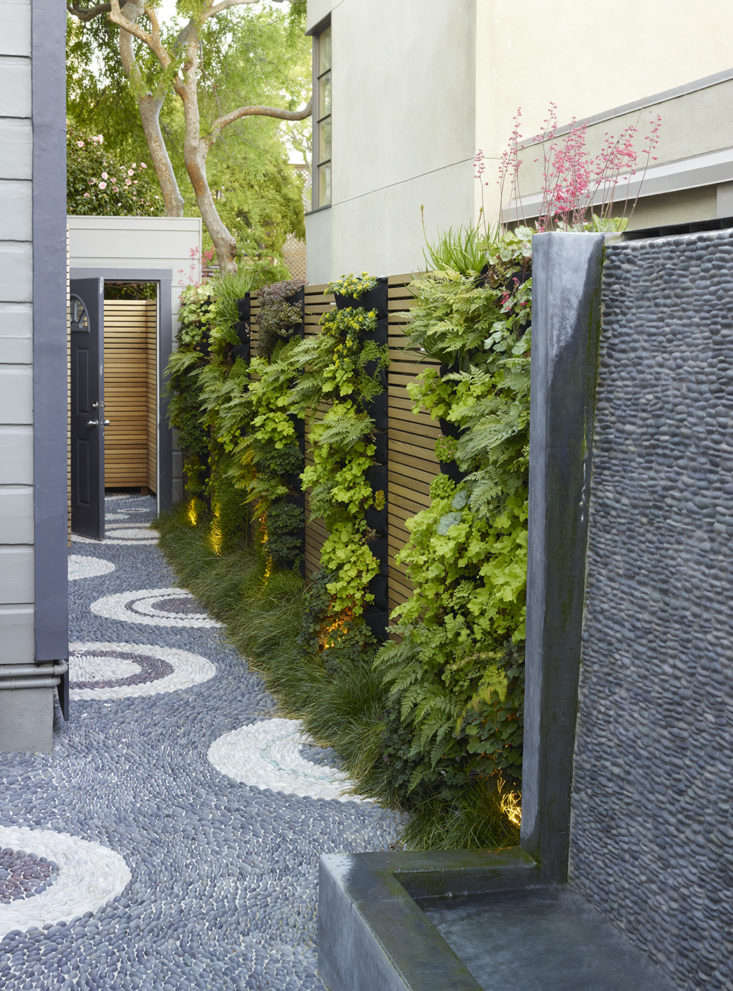 Above: The mosaic path wraps around the side of the house to create a connection between the front and back gardens.

The couple wanted an extremely low-maintenance yard, but Viarengo says a complete absence of plants would have been a mistake. “So we directed the client to a green wall,” she says. “This maximizes space and adds softness.” It also provides a sensory experience for the children, with plants at their eye level. 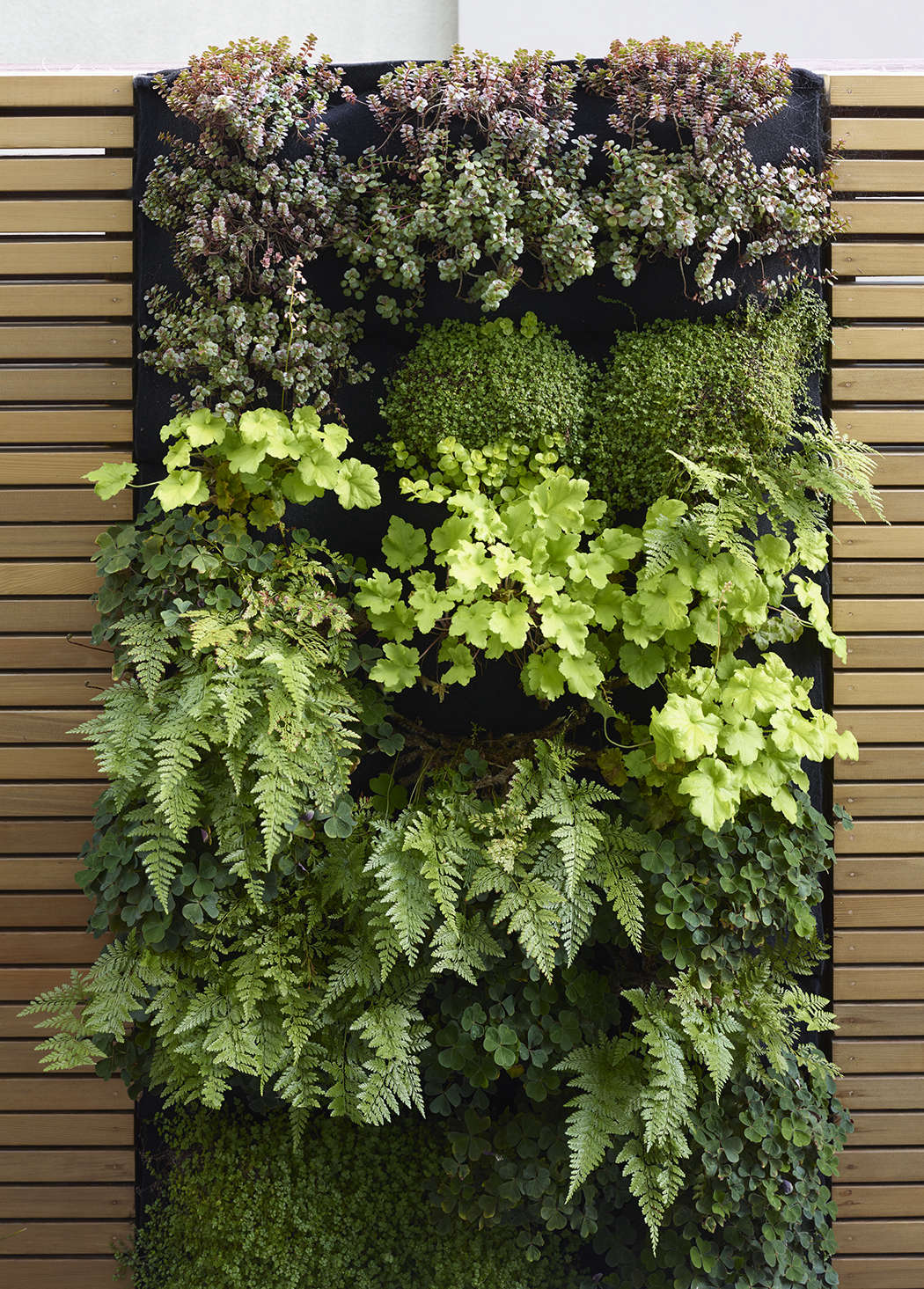 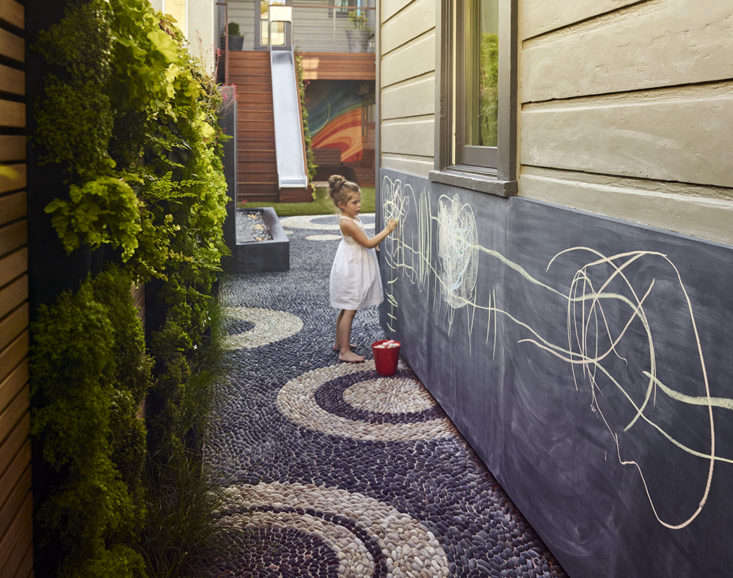 Above: A chalkboard runs the length of the side corridor. 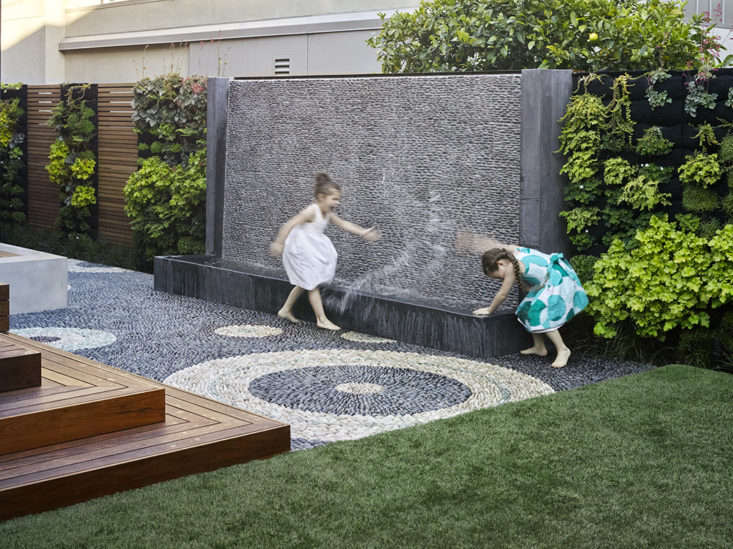 Above: A 12-by-6-foot water wall masks traffic noise and is another space for the children to play. Viarengo consulted Jeff Parker from The Urban Farmer in San Francisco on the fountain mechanics. 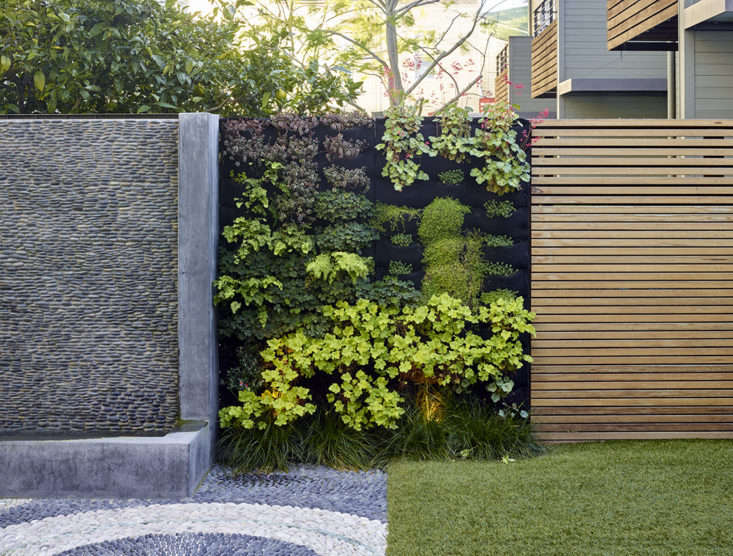 Above: Pebbles, water, a green wall, turf, and a red cedar slatted fence provide a sensory feast. Though Viarengo says she never uses artificial turf, it quickly became apparent this was a must for her clients, who wanted as close to a no-maintenance space as possible. 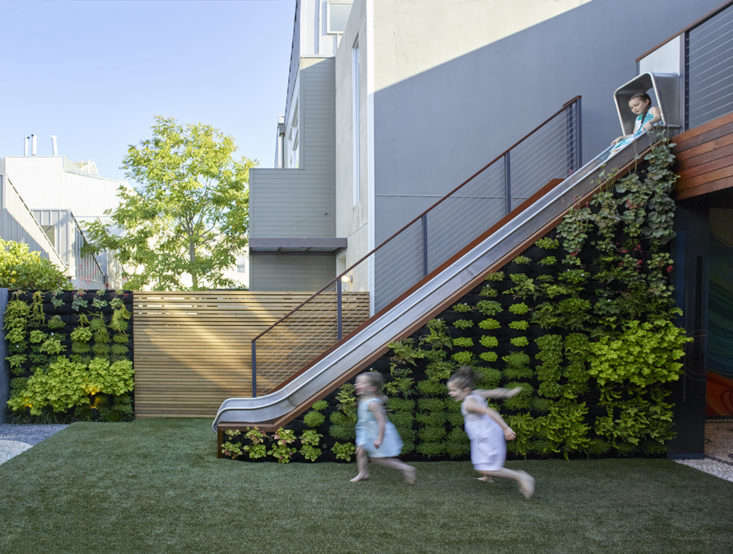 Above: During the landscaping project, the homeowners were reworking the adjoining cottage. Since Viarengo was designing the stairs, the idea of the stainless steel slide came up. 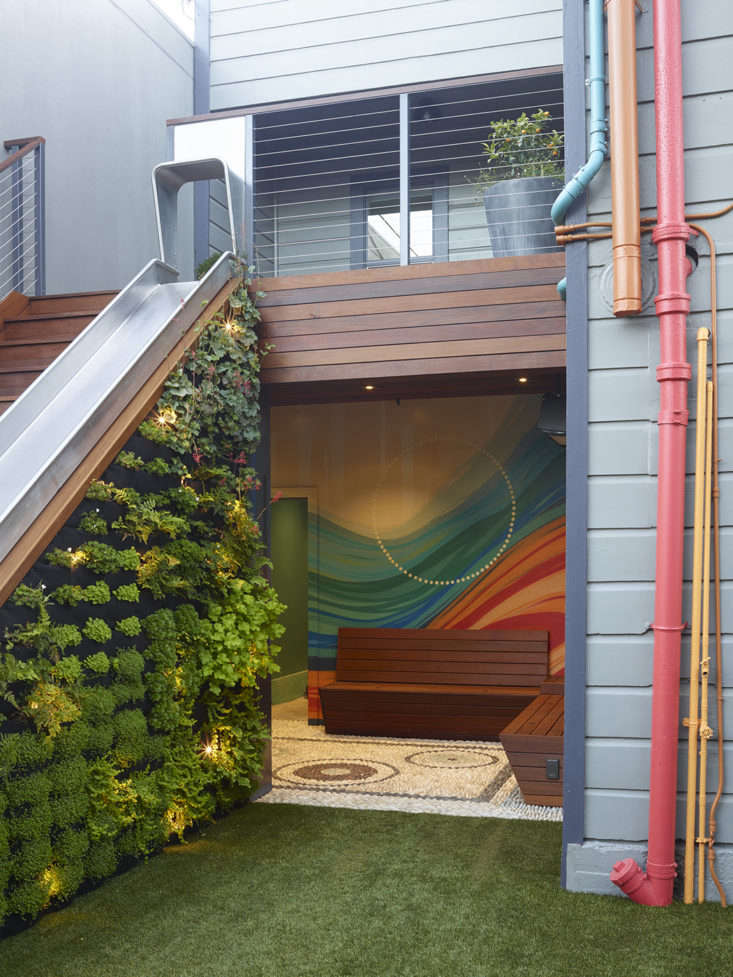 Above: San Francisco muralist Erik Otto brought the Mission feeling home. “Not having a lot of plants, I thought it was necessary to bring colors in to lighten up the space under the cottage deck,” said Viarengo. The two discussed the idea of light and then the idea of the circle came in. That informed the risseu design, which Viarengo happened to be working through with her clients.

“That was the beautiful part of this project,” says Viarengo. “It was complicated at the beginning and then, like risseu, all the pieces began to fit. I think the garden also express a little of that atmosphere. It was a beautiful collaborative work between people with all this different expertise.” 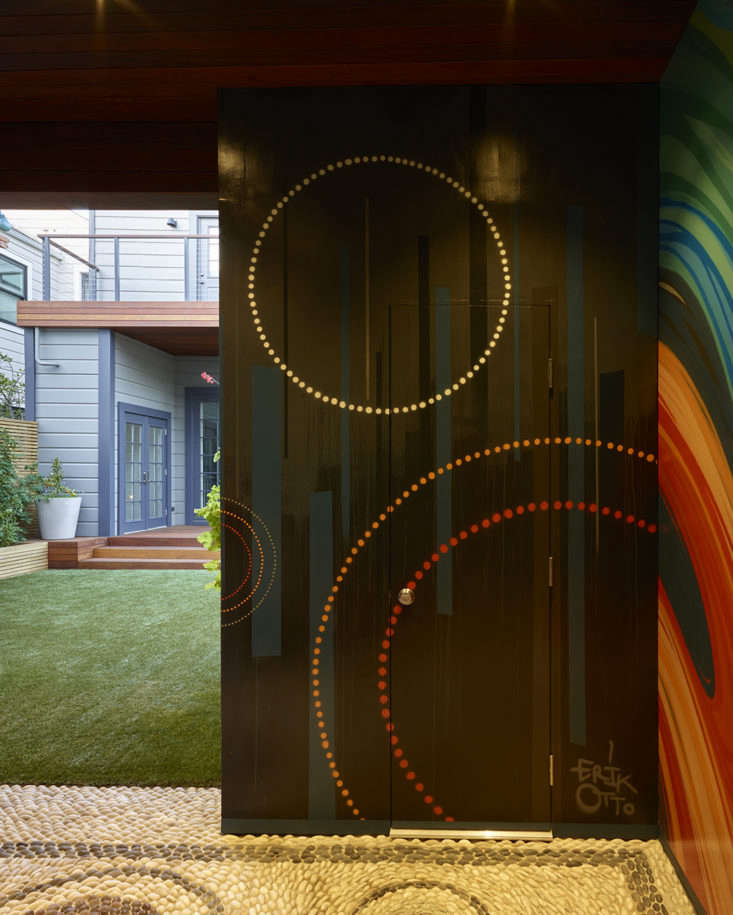 Above: From the cottage looking onto back to the main house. 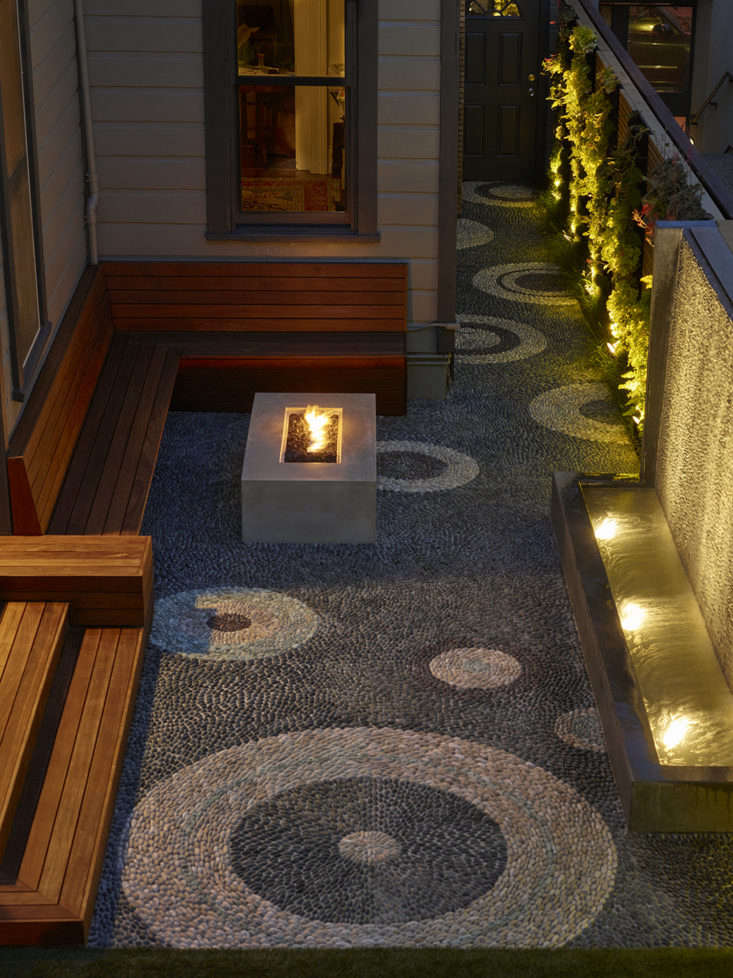 Above: Viarengo designed an adult space with built-in benches and a fire pit, which can be covered. The Mission is one of the warmest neighborhoods in San Francisco, which means outdoor spaces can get a lot of use day and night.

“This little garden has been appreciated a lot,” says Viarengo. “And that’s because everyone had the passion for the work. A lot of love has been put into it, starting with my clients, my team, the contractors, everyone. It was a beautiful process.”