A desire for seclusion was a great preoccupation among the heirs to Calke Abbey in Derbyshire. Solitude from the outside world as well as a passion for taxidermy. From the 1880s until the 1980s when the National Trust took over, much of the house remained as was, and the garden became semi-derelict.

Sir Henry Harpur began this trend of isolation in the late 18th century and was so shy that he sent orders to his servants by letter. He chose to live in a cottage on the estate with his mistress, a lady’s maid from the big house, who later (shock, horror) became his wife. His descendent, Sir Vauncey Harpur-Crewe, took this further and only communicated with his family by letter, while demonstrating kindness and warmth to his servants. He also amassed an enormous collection of stuffed animals, filling every floor of the house with thousands of specimens. 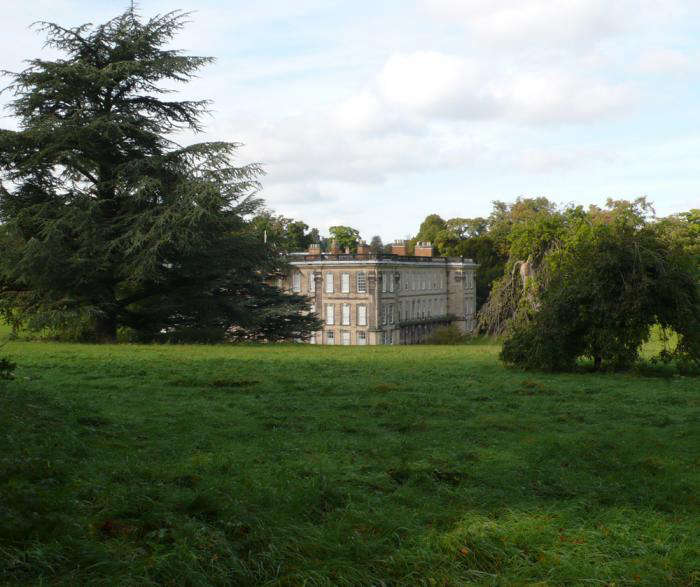 Above: A view of the Abbey from a path leading past the family church towards the Physic and Kitchen Gardens. The baroque mansion, built in the first years of the 18th century, was not an abbey at all but sits on the site of a former priory. 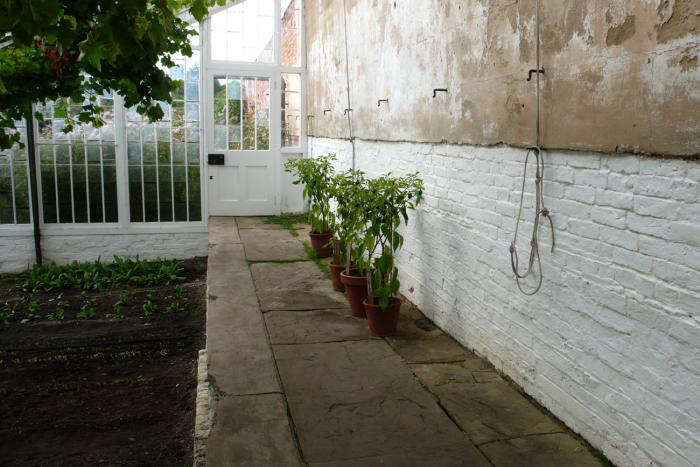 Above: The vinery in the kitchen garden, with its simple layout of York stone slabs, traversing a lower level of earth. Grape vines cover the slanting ceiling and chili peppers (Capsicum ‘Red Cherry’) are arranged against the warmth of the whitewashed wall. 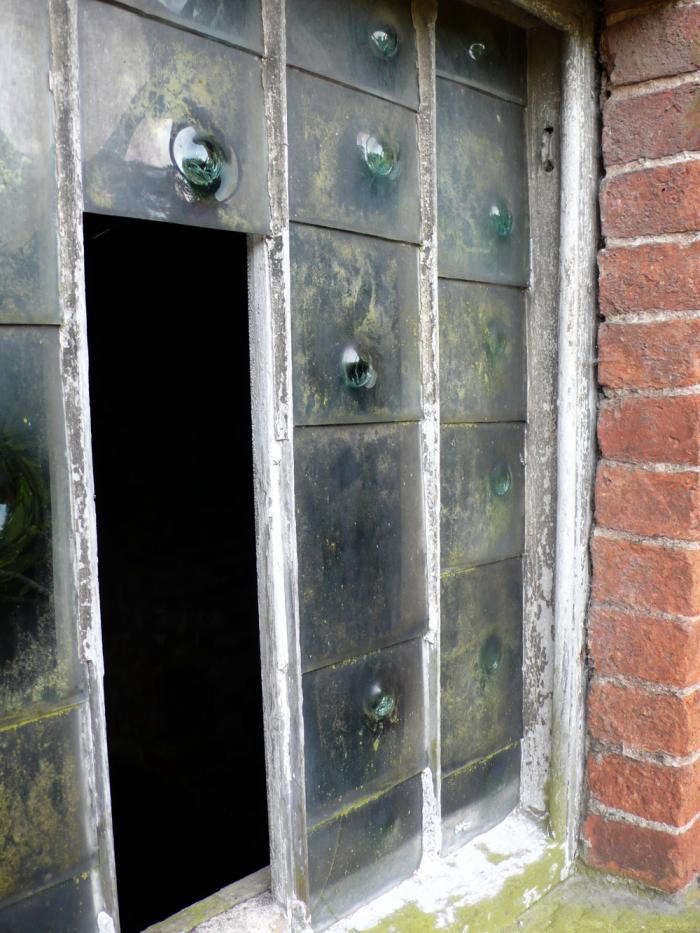 Above: Irreplaceable panes, set vertically on one of the many outbuildings. The decision of the National Trust was to repair, not to restore. It has not been set-decorated, simply prevented from falling down. 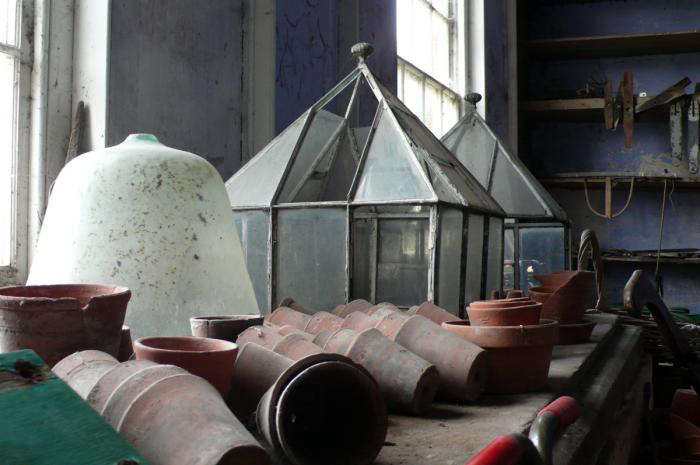 Above: The potting shed with its abandoned glass cloches and terracotta pots. They are not intended to be artfully arranged: leaning against one wall is a red plastic “Flymo” lawnmower, synonymous with the 1970s. 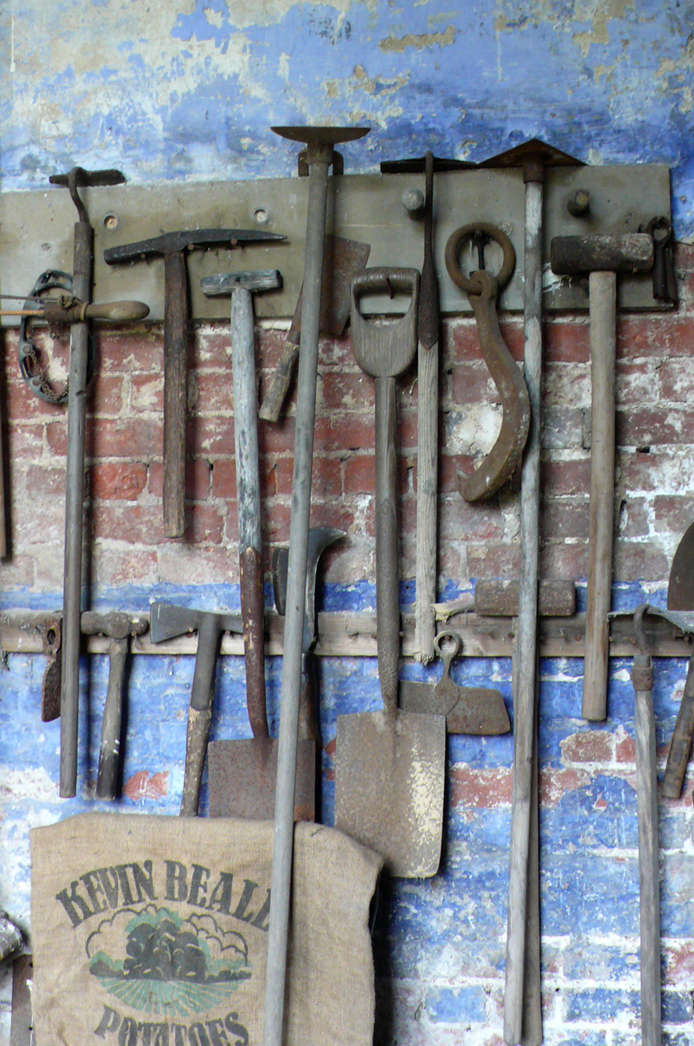 Above: Ancient tools, never replaced. The color of the lime wash is a rather startling yet authentic blue. 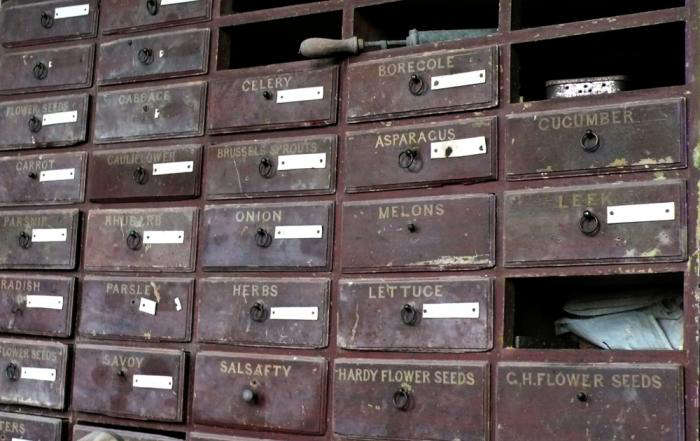 Above: The orderly seed drawers, almost all with contradictory information pinned on later. 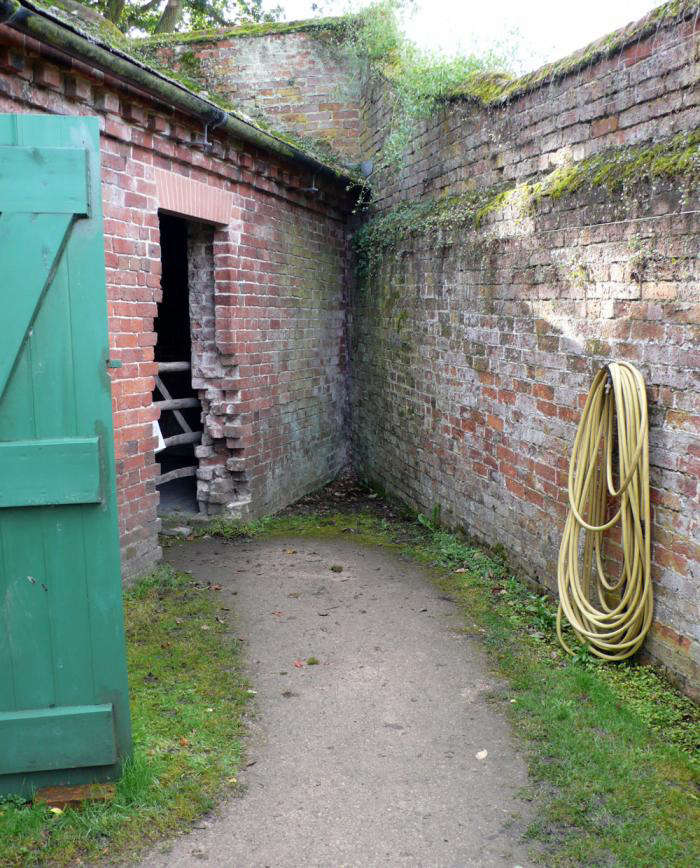 Above: In 1876 a “pony lawnmower” was purchased in London and the pony that pulled the lawnmower lived here, next to the potting shed. Relics inside include some leather pony shoes intended to protect the lawn from footprints. 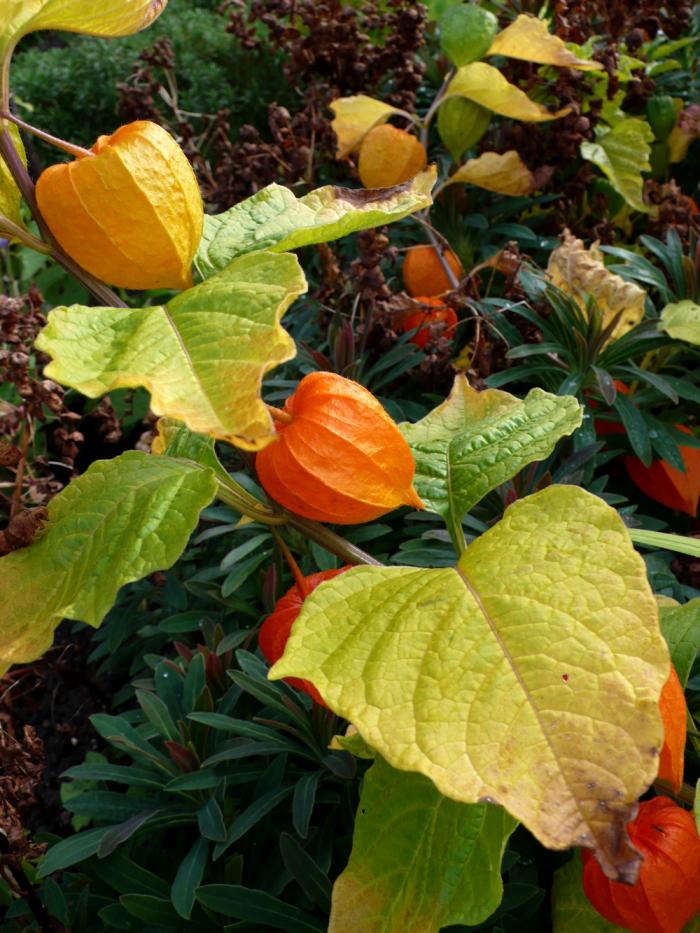 Above: Chinese lanterns, Physalis alkekengi, growing in the Physic Garden. The larger Walled Garden is so vast and was so derelict that a decision was made to leave it alone: it is an enclosed field with tracks in the grass tracing the shapes of former beds. 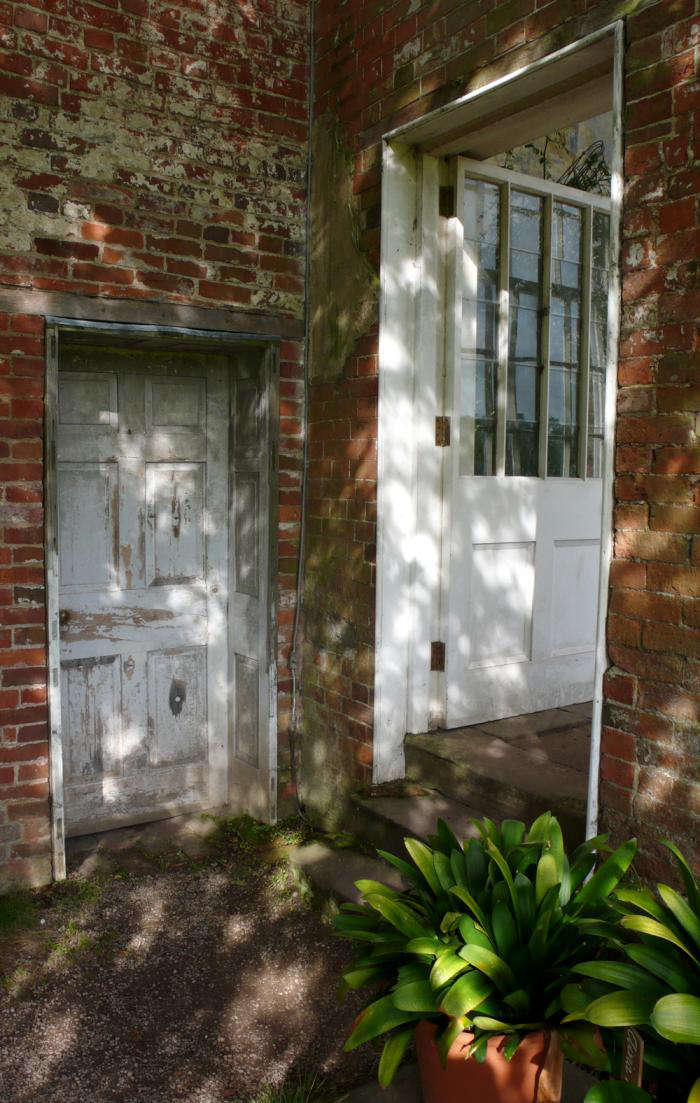 Above: The door on the right is the entrance to the Orangery. 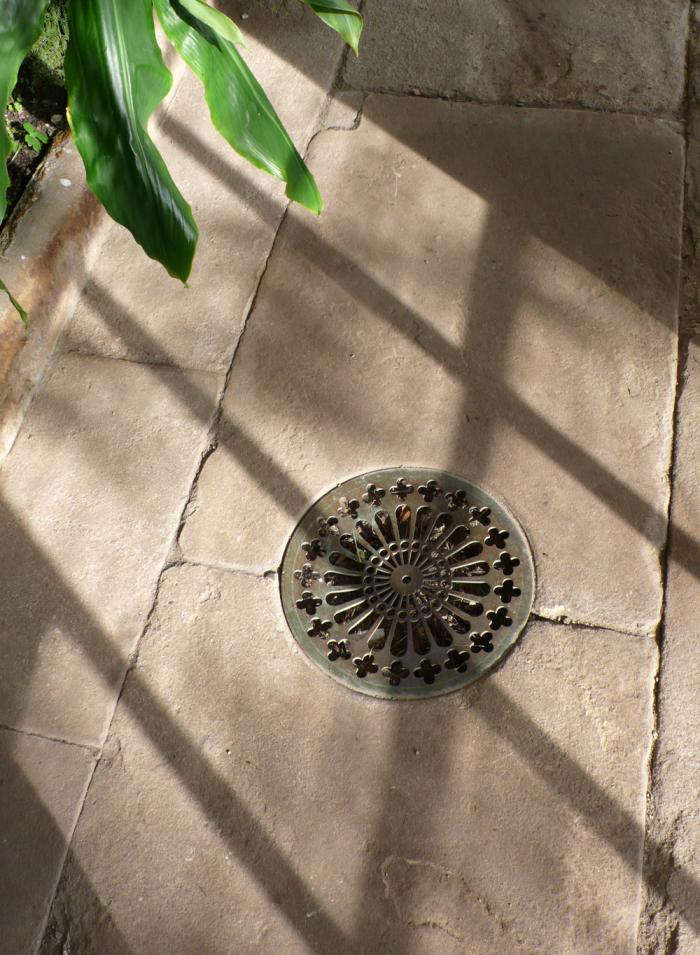 Above: The Orangery floor. 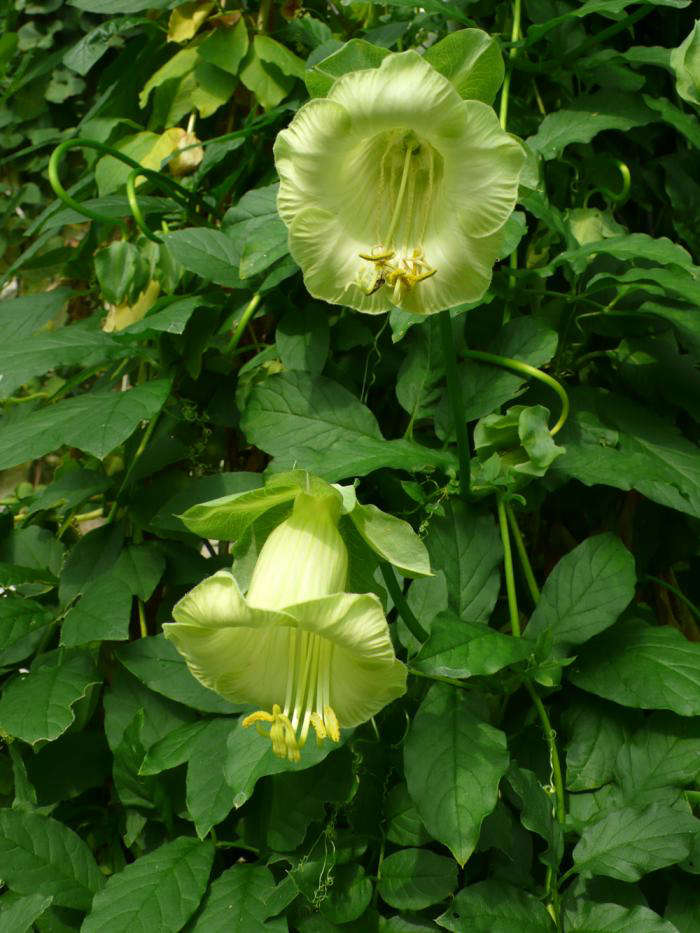 Above: Cobaea scandens. A Mexican (yet peculiarly Victorian) climber, also known as the Cup and Saucer Vine. It grows in the Temperate House. 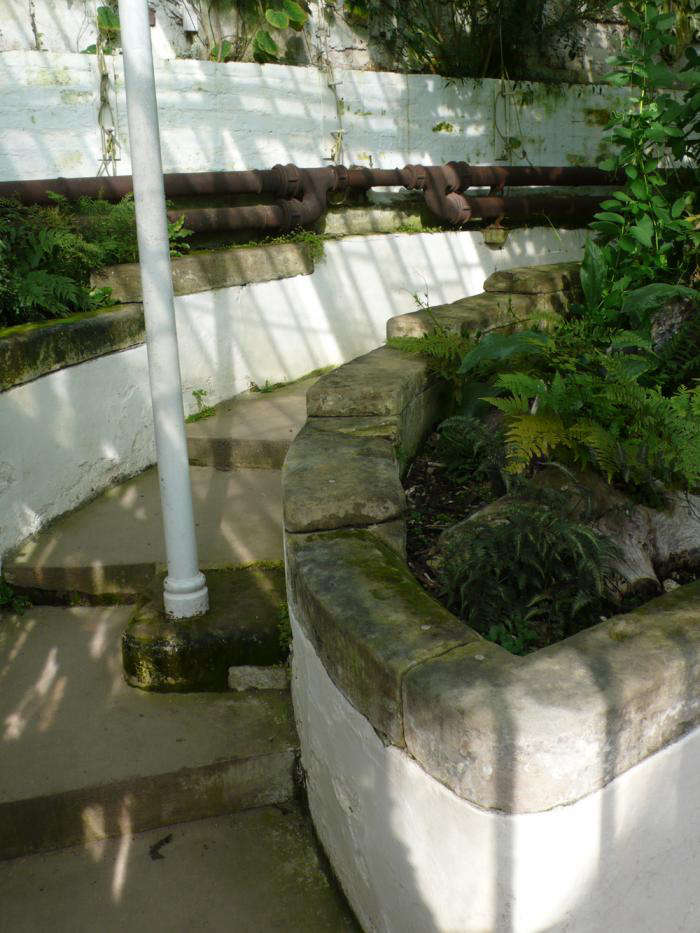 Above: More from the Temperate House and its bulky heating system. 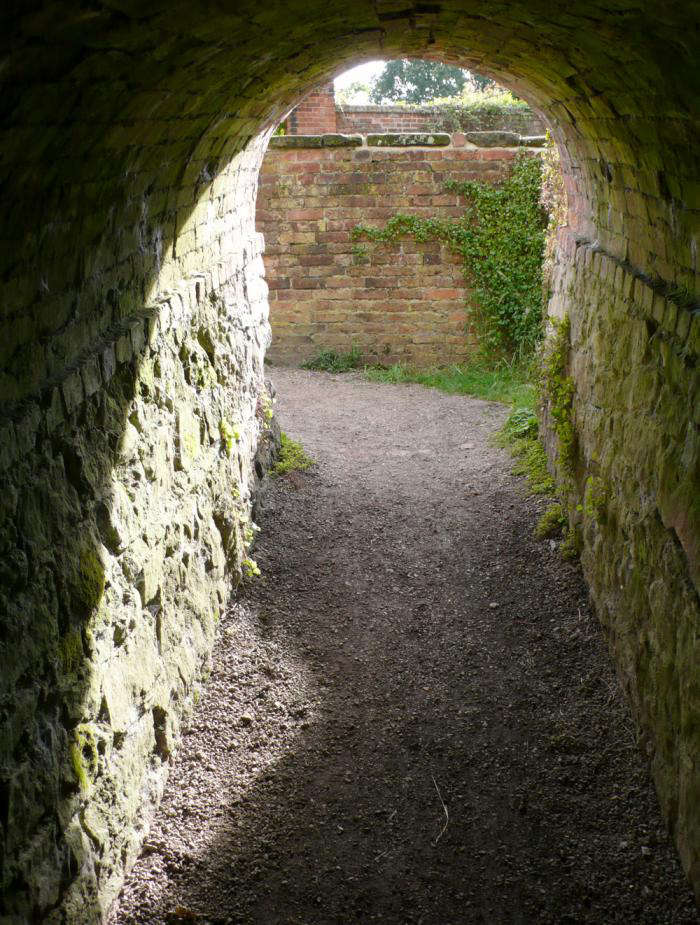 Above: There are at least three tunnels at Calke Abbey. One connects the brew house to the main house; another is linked to a limestone quarry on the edge of the estate and runs under the drive. This one, with its permanent puddles and drips, was built as a shortcut from the kitchen garden. It kept the scenic route clear for gentle persons.

N.B.: This is an update of a post originally published October 12, 2012 as part of our Miss Havisham week.

An Insider's Favorite: The Bliss of Visiting Rousham in the Cotswolds