When we moved our family of four from Bath, England to Portland, Oregon in 2012 little did we know that we would spend the next three years transforming a disused rose garden into an English kitchen garden, complete with vintage-style greenhouse.

It was a big move for me, not least in family terms but in gardening terms too. I was leaving behind a walled kitchen garden where I had carefully trained espaliered apples and fan-trained peach trees. I was looking for a place where I could re-invent my old garden and add more besides.

We found a house in Portland that stood on 0.6 acres. It was quite unusual to find a house with so much outdoor space close to the city, we were told! The problem was that the garden, though once beautiful, hadn’t been tended for roughly six years. The old rose garden was knee-deep in blackberries, the fountain was full of dirt and weeds, a crabapple sat sadly enveloped in Old Man’s Beard, and we found three ponds that we didn’t know were there. There was a lot of work to do. 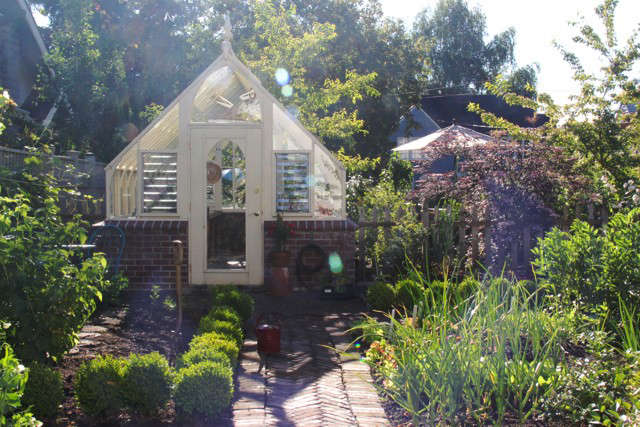 Above: The old rose garden became my new kitchen garden. We felled a dying tree and asked a local greenhouse maker (SturdiBuilt) to build a bespoke wooden frame (measuring 10 by 16 feet) to sit on a red brick base. I wanted it to look as much like an English greenhouse as possible to remind me of home. 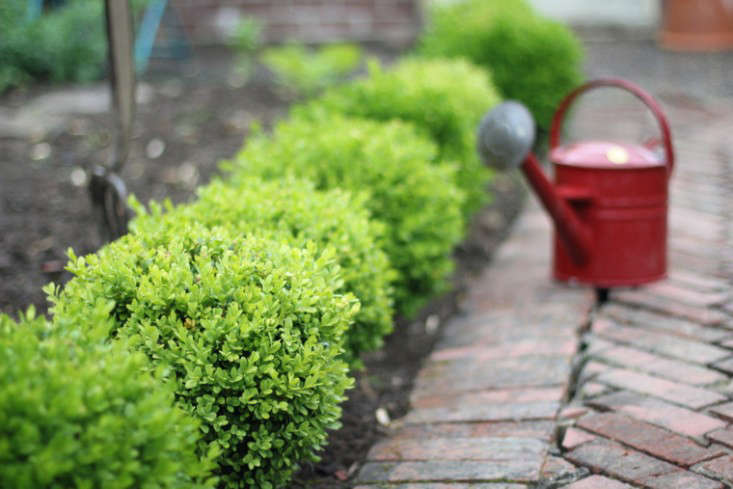 Above: I brought this Haws watering can with me from England. It’s quite simply the best watering can I’ve ever had. The design is called ‘Peter Rabbit’. (N.B. A red Peter Rabbit Watering Can is $89.99 on Amazon.) 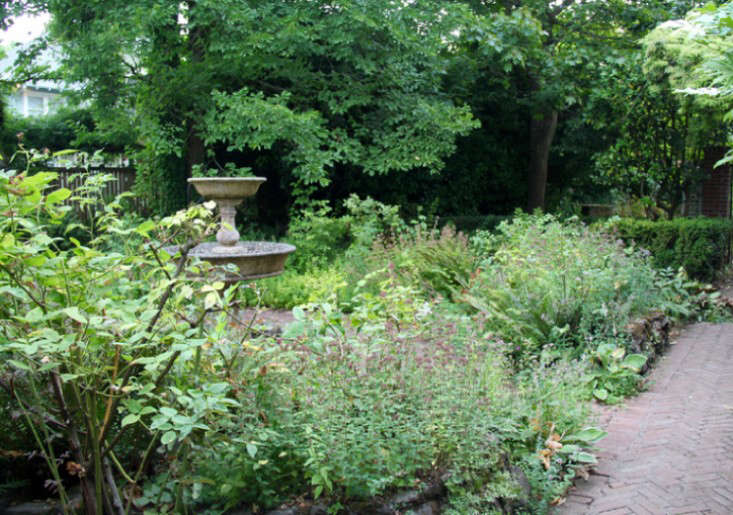 Above: When we arrived, the fountain was in disrepair and full of dead plants. Weeds choked the old roses and blocked the pathways. 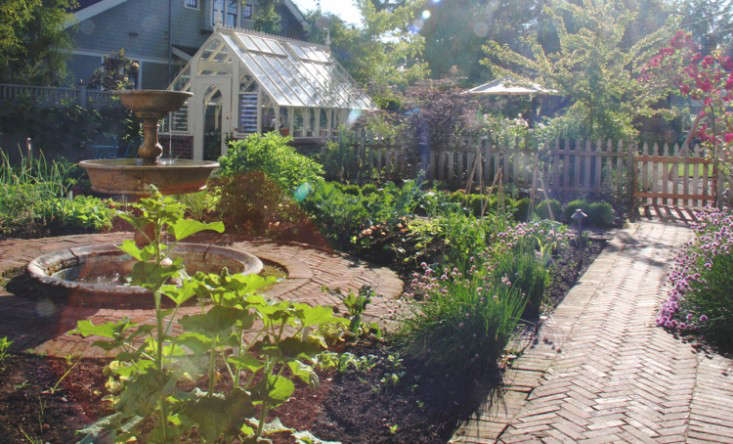 Above: Brick paths edged with box give the vegetable beds structure and provide evergreen interest during the winter months. 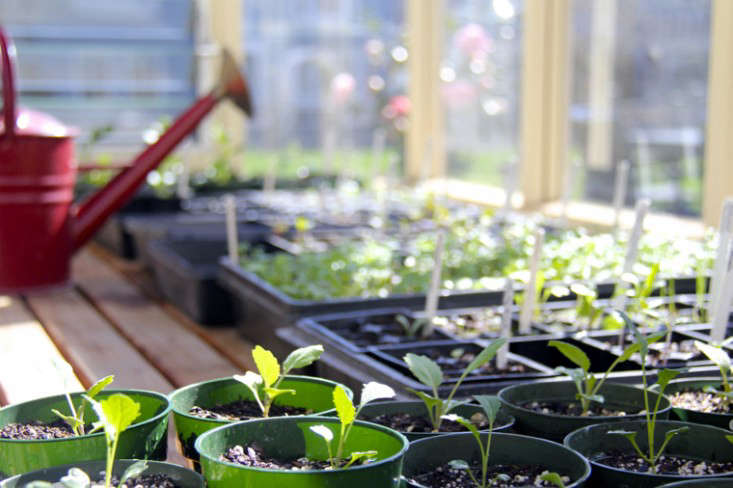 Above: I raise all of the vegetables and herbs in the kitchen garden from seed in the greenhouse.

I planted some apple trees (Ashmead’s Kernel and Liberty) along an east-facing wall and trained them as espaliers. I also added a fan-trained Peach (Q18) which is resistant to peach leaf curl and does very well, even in our wet climate. 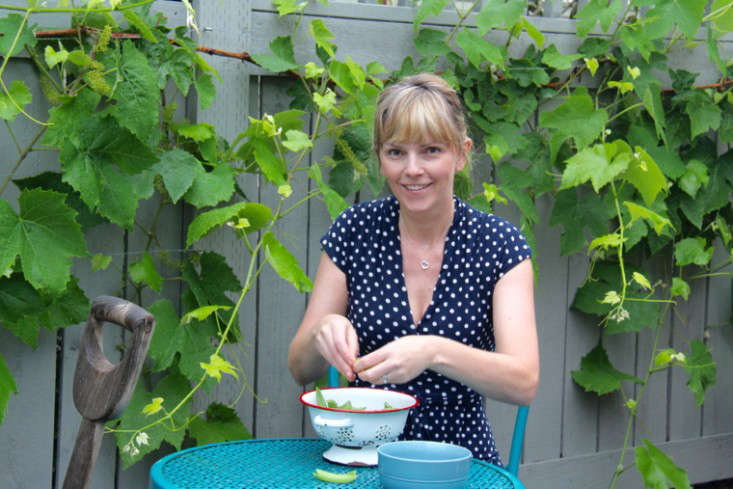 Above: I like to shell peas outside my greenhouse next to a grapevine trained along the fence. 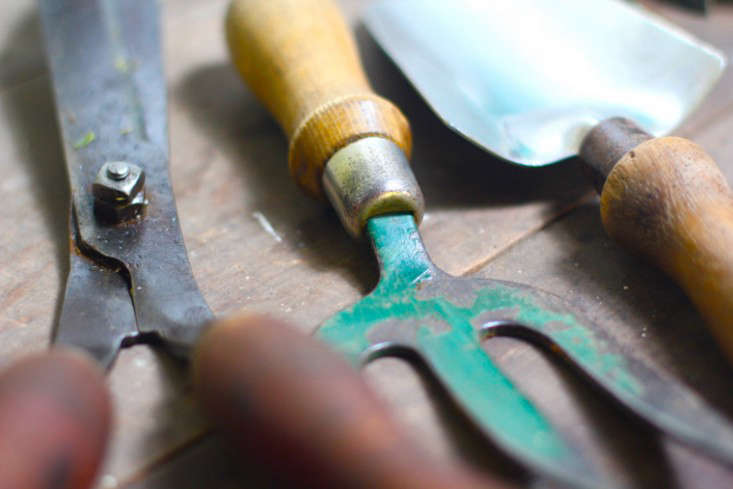 Above: Luckily, I had decided to ship all my tools from the UK, even though I had to scrub each one with disinfectant to comply with US import laws. It was worth it because I felt like I could get started on the garden immediately. 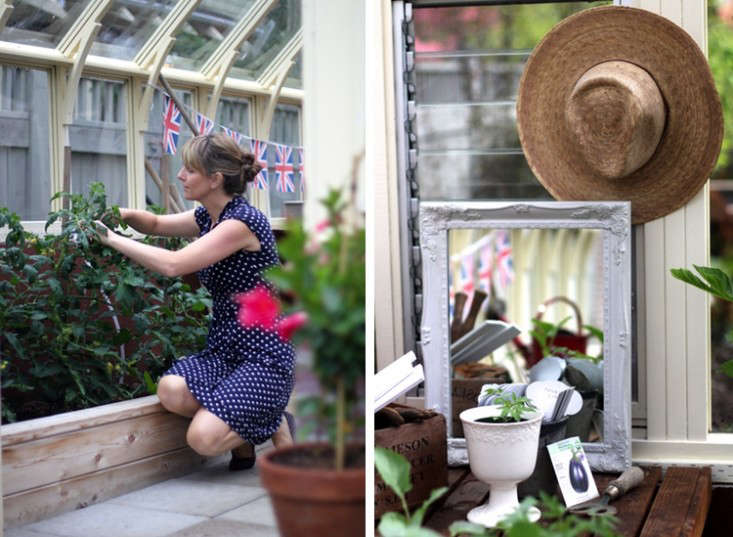 Above: The first thing I added to my greenhouse was a length of Union Jack bunting. Since then I’ve added mirrors, antique boxes, and vintage terra cotta pots. 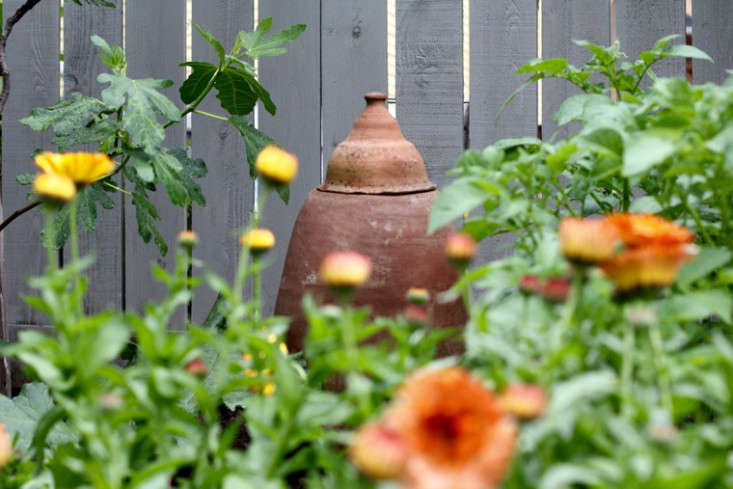 Above: One of the pieces I brought with me from England was this rhubarb forcing pot. It’s fantastic for making long, sweet, pink rhubarb stems. I’ve also used it to force sea kale in the past. 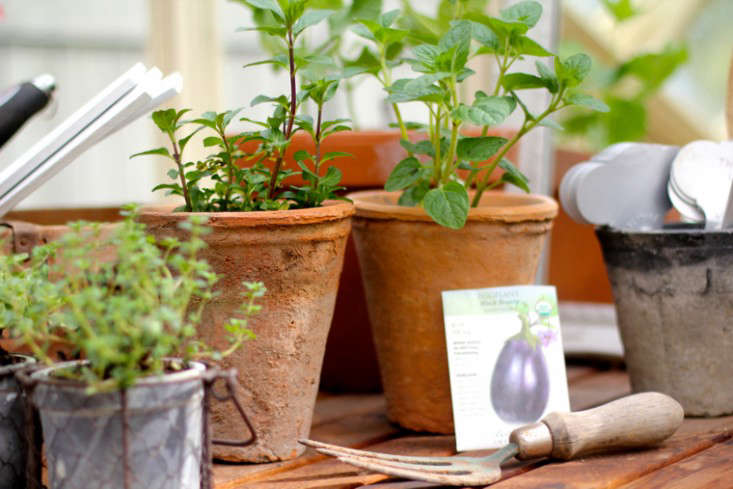 Above: I love old terra cotta pots and galvanized tubs and try to use them whenever I can. 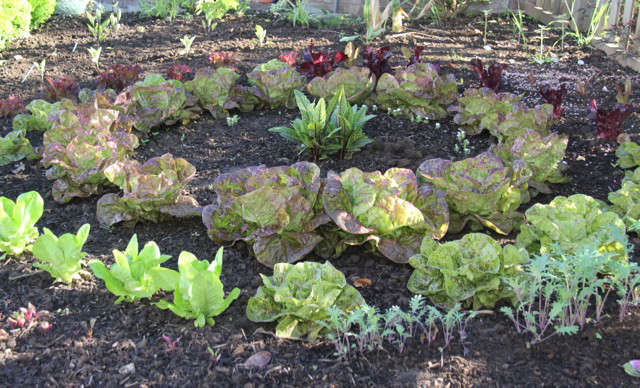 Above: The design of the old rose garden lends itself well to growing vegetables. Each year I plant vegetables and herbs in a different pattern radiating out from the central fountain, which we cleared out and repaired. 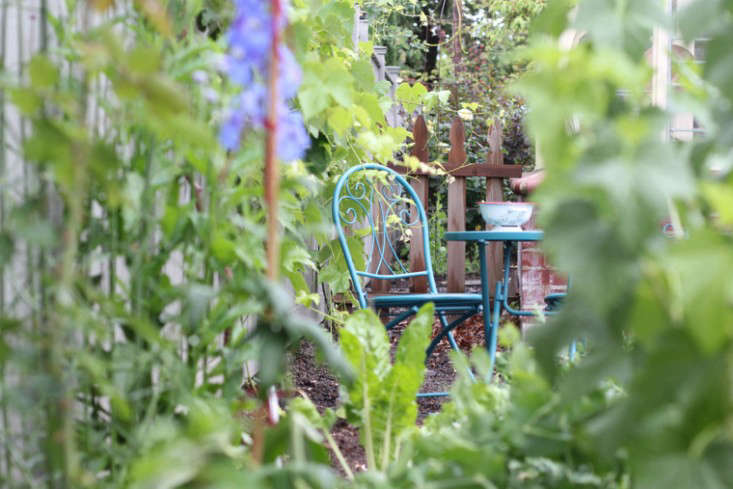 Above: I mix vegetables with flowers. Here a delphinium mingles with the grapevine. 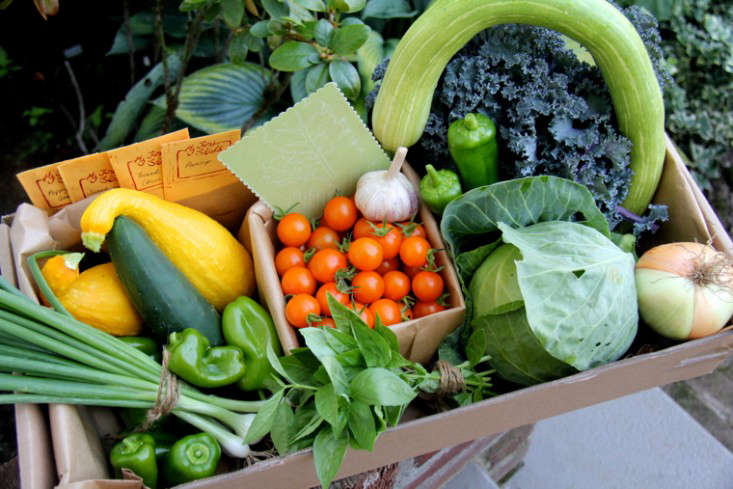 Above: The benefit of having a fully stocked kitchen garden is that you can use the produce to give as thank-you gifts. This is a vegetable box that I made for one of our neighbors who gave us a bike. 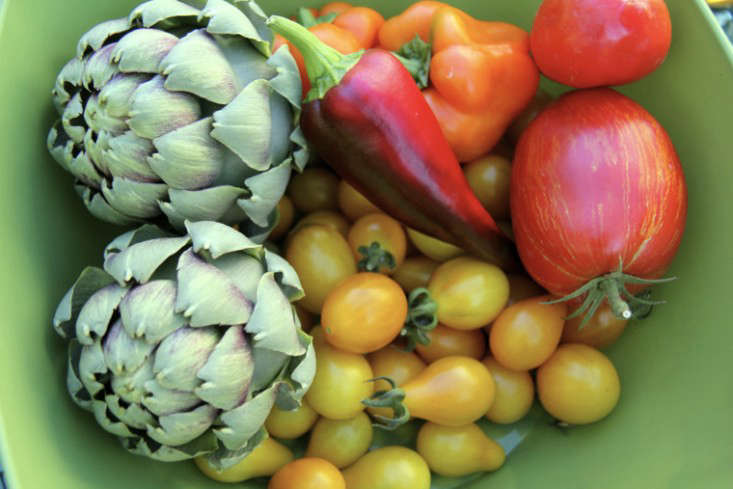 Above: I love to grow the un-buyables: unusual or interesting varieties of artichoke, heirloom tomatoes, and peppers saved from seed. 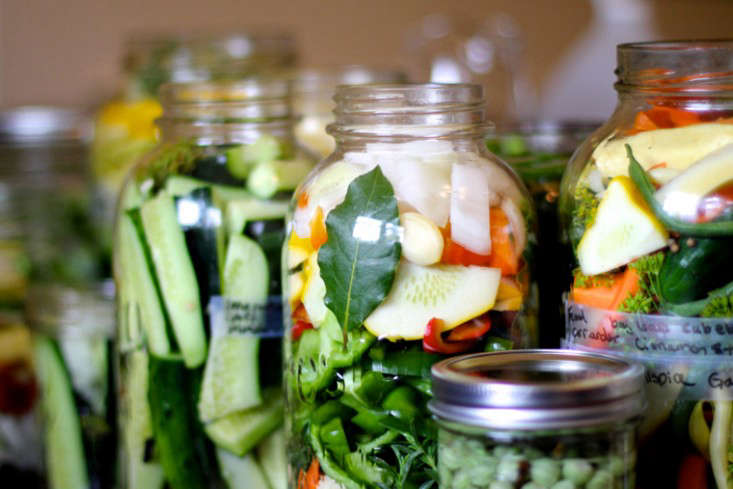 Above: Picking is a huge part of what I grow. Whatever we don’t eat gets preserved for another day. 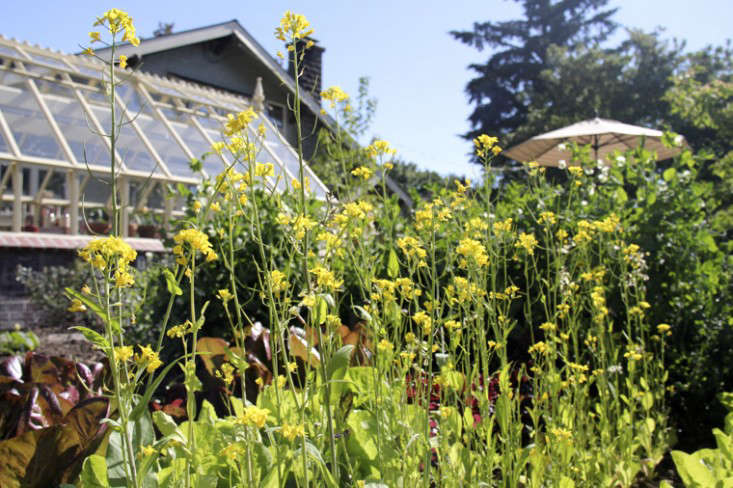 Above: Each year I let at least one vegetable go to seed. I’m always surprised at how many beneficial insects the flowers attract. It’s great for the garden and fascinating to my children. 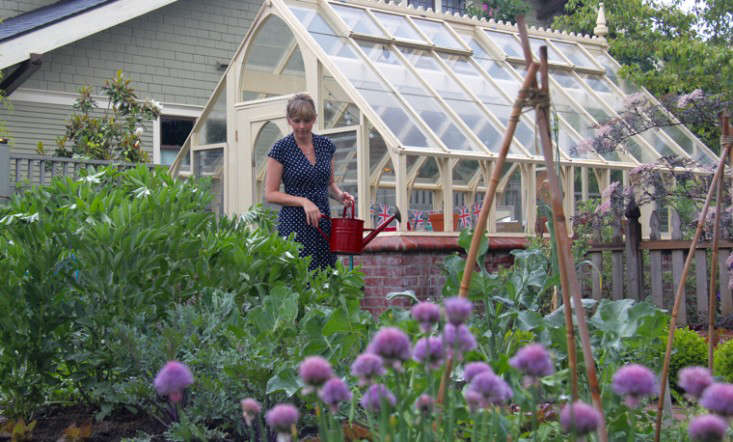 Above: In the evening there’s nothing better than taking a last look around the garden, closing the gates, and putting the tools away, until tomorrow.

Visit more of our favorite “gardeners’ gardens” at: