Katrin Scharl was not a born gardener. In fact she really had little interest until she and her husband, Moritz Bayer, began dabbling in the small plot outside their rented Vienna home. When it came time for the German couple to buy their own home, they turned from city to country in search of the perfect garden home. Well, at least one with potential.

In 2011, their search led them to the quaint village of Brandenburg outside of Berlin. There, on the town square, Katrin and Moritz found an historic brick farmhouse with 2,500 square meters of land. Though the plot had not been touched in 50 years, it did have a walled garden area, a barn, some self-seeded fruit and nut trees, as well as a few elderberry bushes. The couple’s dream of a garden that would sustain them through the winter began to take shape.

Since then, many have enjoyed witnessing Katrin’s ongoing evolution from amateur to expert, which she chronicles on her blog, Taking Notes. Despite what Katrin describes as a trial-and-error approach, she and Moritz have utterly transformed their once weedy wasteland into a bountiful landscape, complete with orchard, walled flower garden, berry patch, vegetable beds, and chickens. 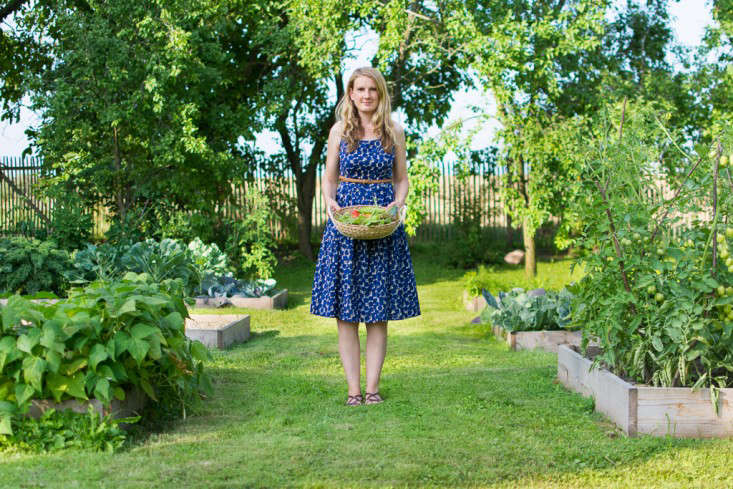 Above: Katrin Scharl among the raised beds of her vegetable garden. Photograph by Nicola Holtkamp (who featured more of Katrin and Moritz’s garden and home on her site,

Katrin and Moritz’s first fall in the home was taken up by clearing 50 years’ worth of untouched wilderness. “The garden was a literal wasteland,” Katrin said. “There wasn’t a single flower, but huge piles of rubble and rubbish.” Fortunately, there were a few self-seeded fruit and nut trees as well as some berry bushes, so the couple was able to begin harvesting right away. 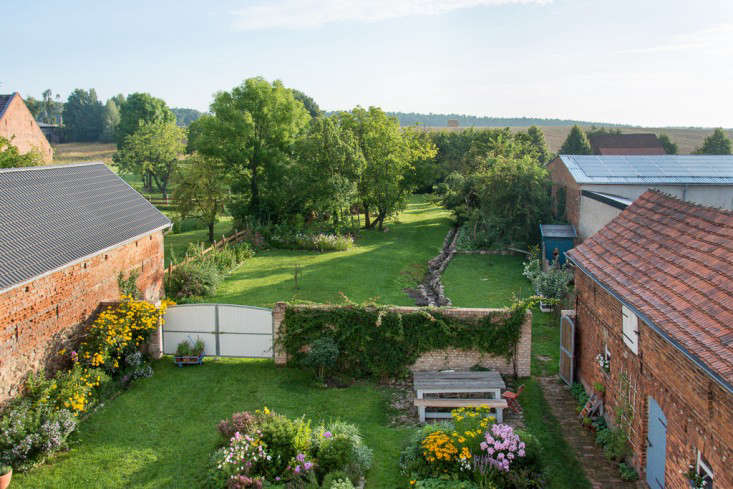 Above: A view of Katrin and Moritz’s garden three years after they moved in includes a walled flower garden with chicken run, an orchard, and a vegetable garden. Photograph by Nicola Holtkamp

With ambitious plans, the couple dug right in during their first full growing season in the home, planting the walled garden, completing a deck, clearing the vegetable patch and establishing a potato field. In addition, they expanded their orchard, adding pear, quince, and more apple trees to the existing plum, cherry, and nut trees. 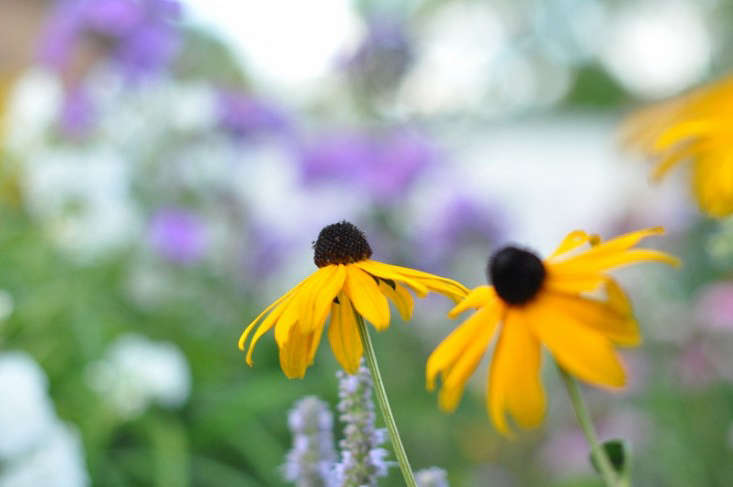 Above: In the walled garden, cheerful Rudbeckia is complemented by the cool color of purple phlox. 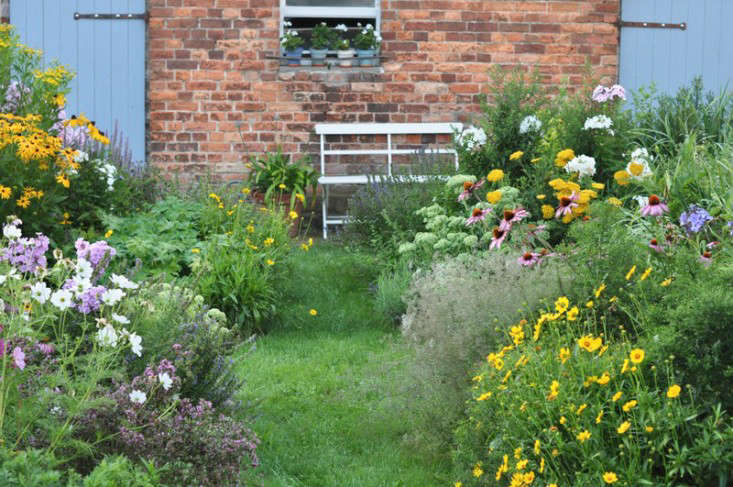 Above: Nestled between the barn and house, the couple’s walled flower garden (shown here, year three) is divided into four perennial plots with walking paths in between. 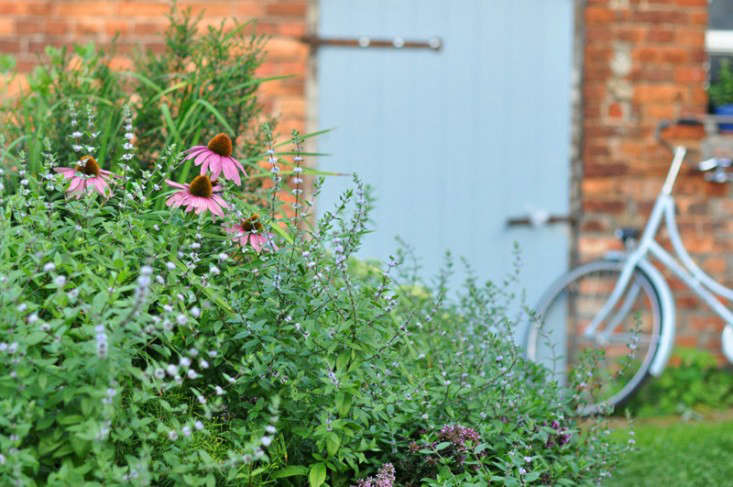 Above: Katrin traveled around the region photographing historic brick structures with painted doors, before settling on the perfect shade of blue for the barn door. Turns out it was “just a cheap shade form the local hardware store.” The bike just happens to match. 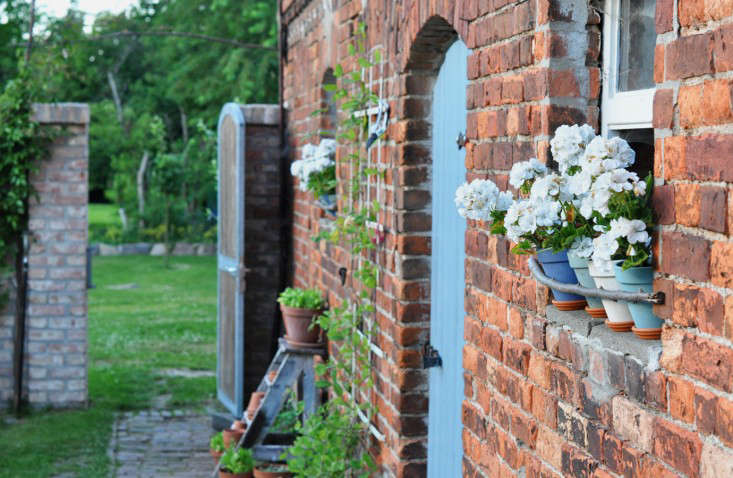 Above: Completely enclosed by the house, barn, and a brick wall, this cozy garden has a rather Secret Garden romance to it. Here a wooden gate next to the barn leads to the chicken run, vegetables and orchard beyond. 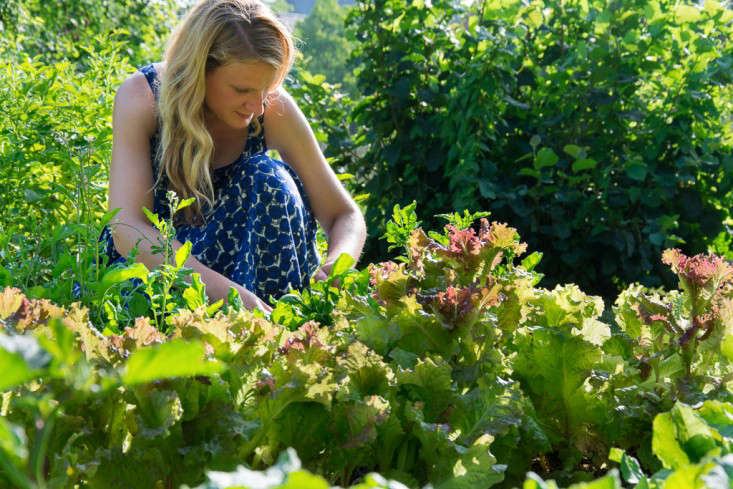 Above: Katrin picks lettuce from her vegetable patch. Photograph by Nicola Holtkamp.

For Katrin and Moritz, the vegetable garden in particular was a learning process. A solid week of rain in June 2013 flooded the newly planted garden during its first year. After that the couple constructed raised beds. 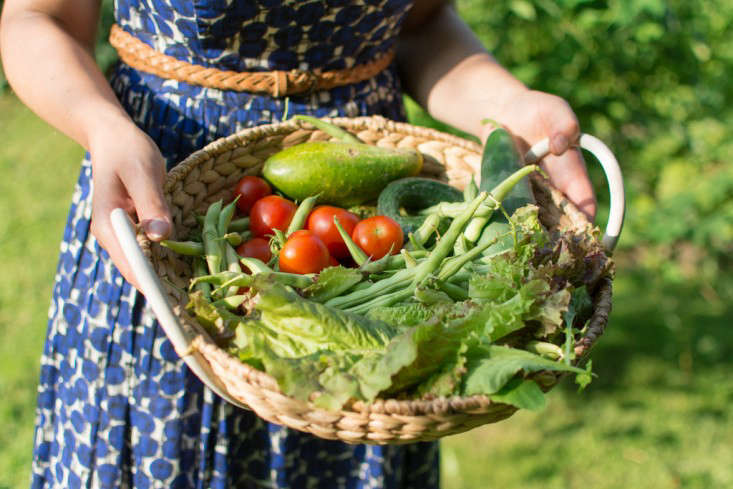 Above: A harvest of vegetables. Photograph by 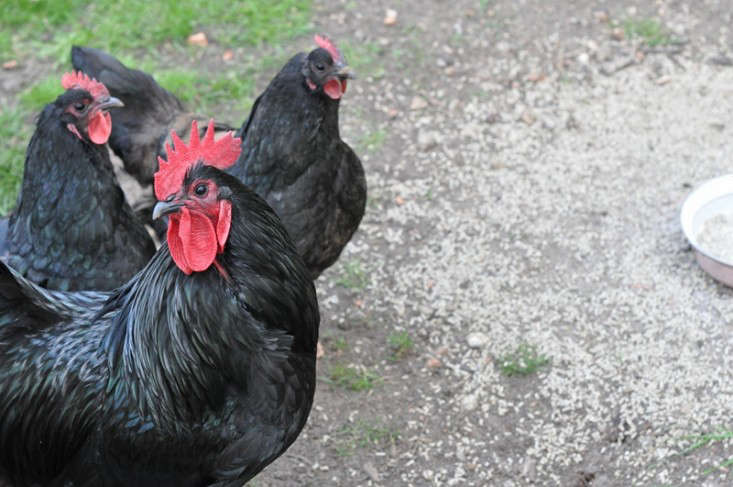 Above: Katrin and Moritz’s chickens provide fresh eggs 11 months of the year. (For some reason they seem to take the Christmas season off.) They also have the 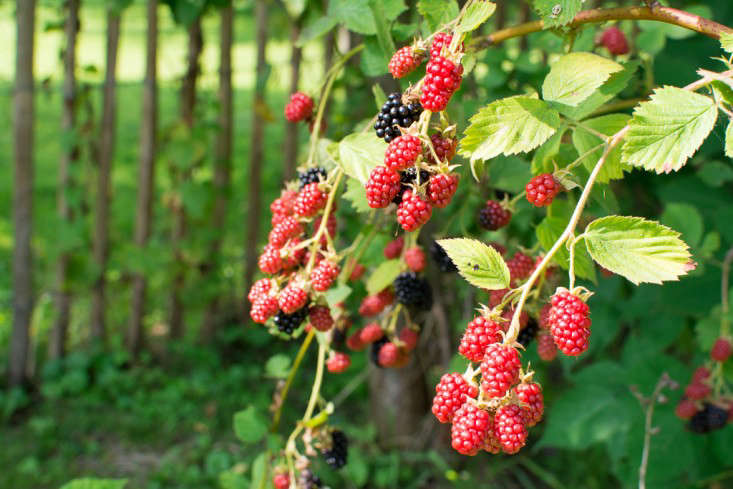 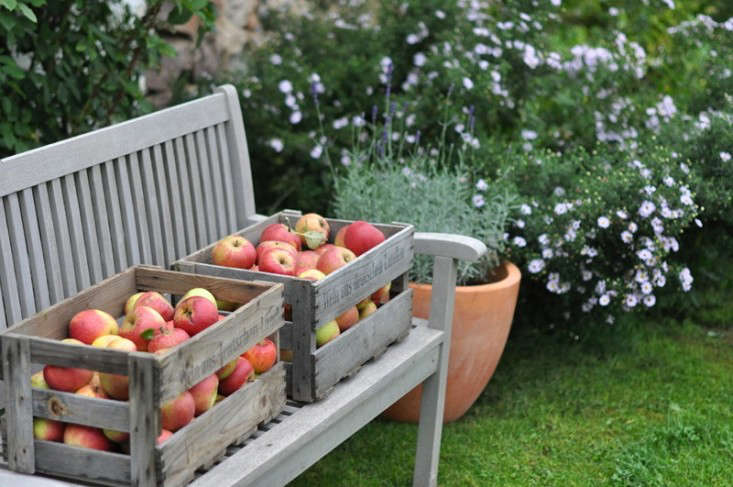 Above: … and give her apples in the autumn, when the asters are in bloom. 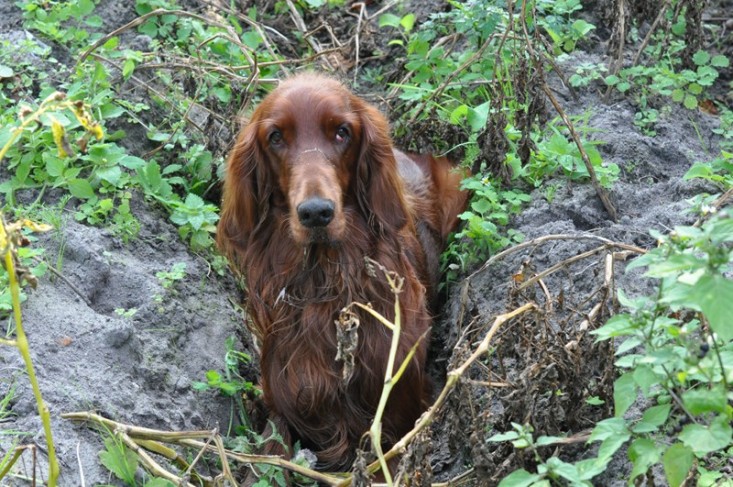 Above: Ever helpful, the couple’s dog, Ludwig, assists with the potato harvest. 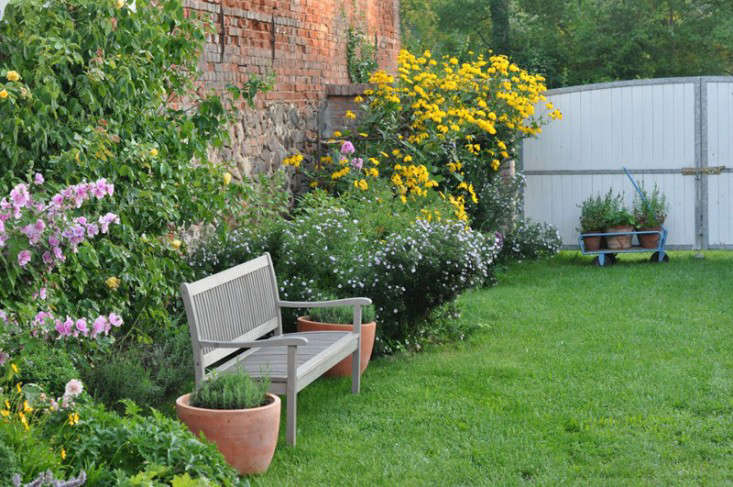 Above: A larger gate leads from the walled garden to the chickens, orchard, and vegetable patch. 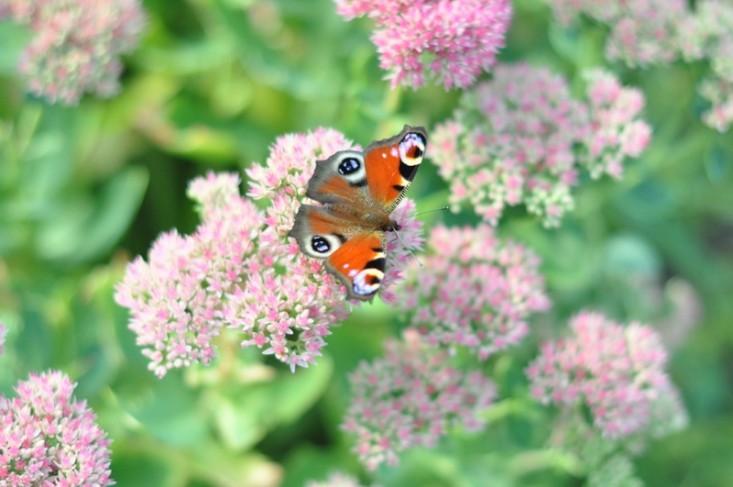 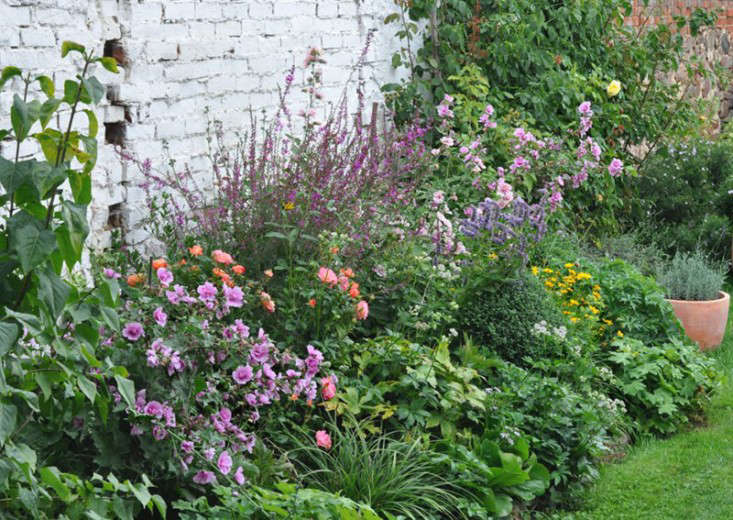 Above: A border garden with soft pinks. 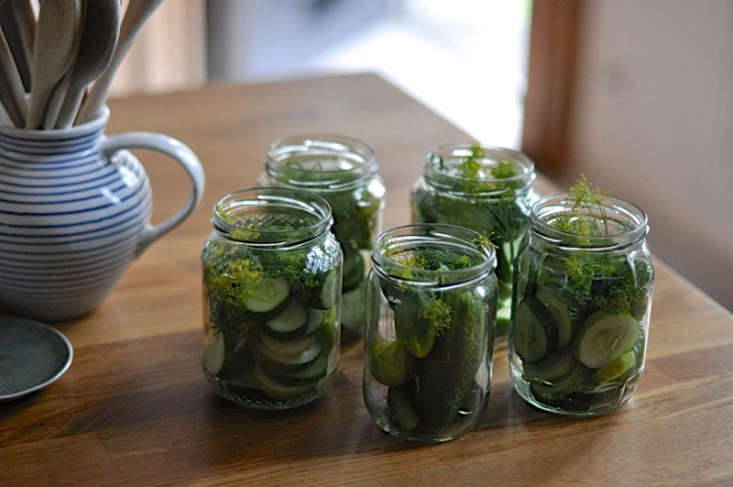 Above: Provisioning themselves for the winter means a lot of canning. Here Katrin makes dill pickles. Elderberry syrup and plum butter are also among her specialties. Potatoes, apples, and squash are stored in the root cellar. 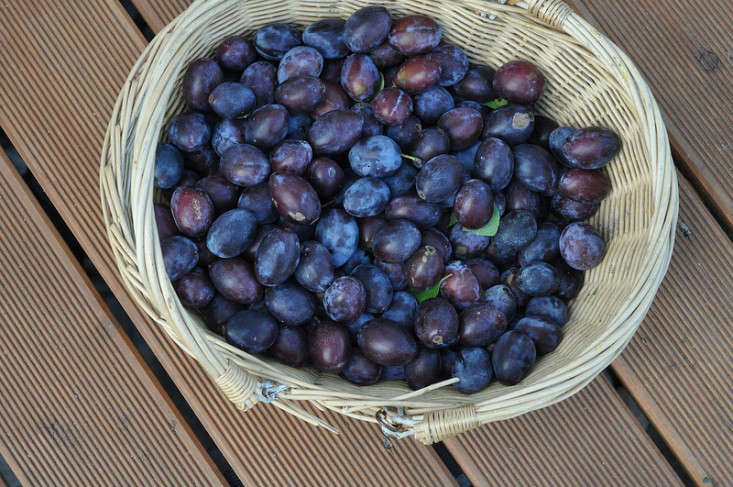 Above: A harvest of plums. Often Katrin, who works from home as a PR writer, indulges in what she calls a “hippie lunch,” fresh pickings from the garden. 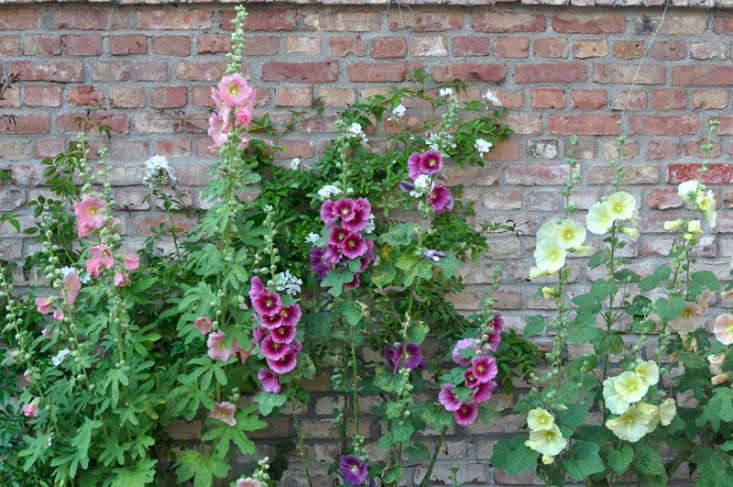 Above: Hollyhocks climb the brick facade in the walled garden. 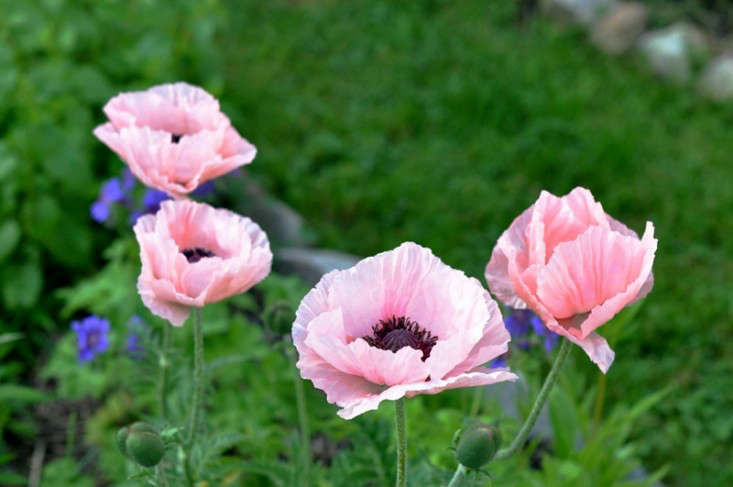 Above: Pink poppies in the late spring. 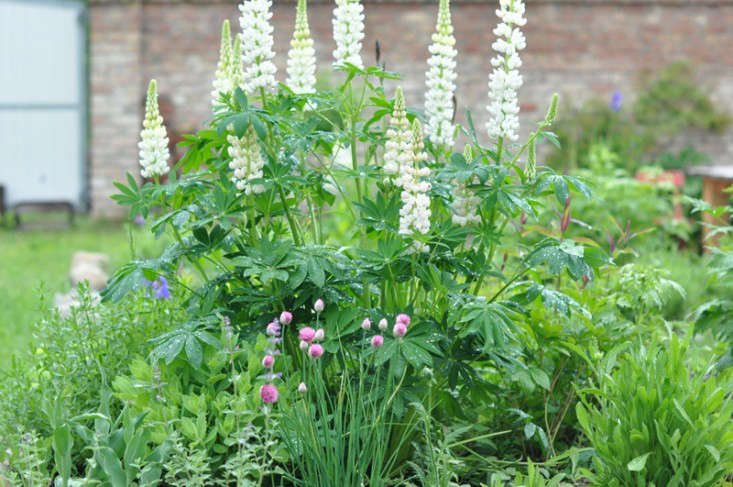 Above: Lupine and blooming garlic. 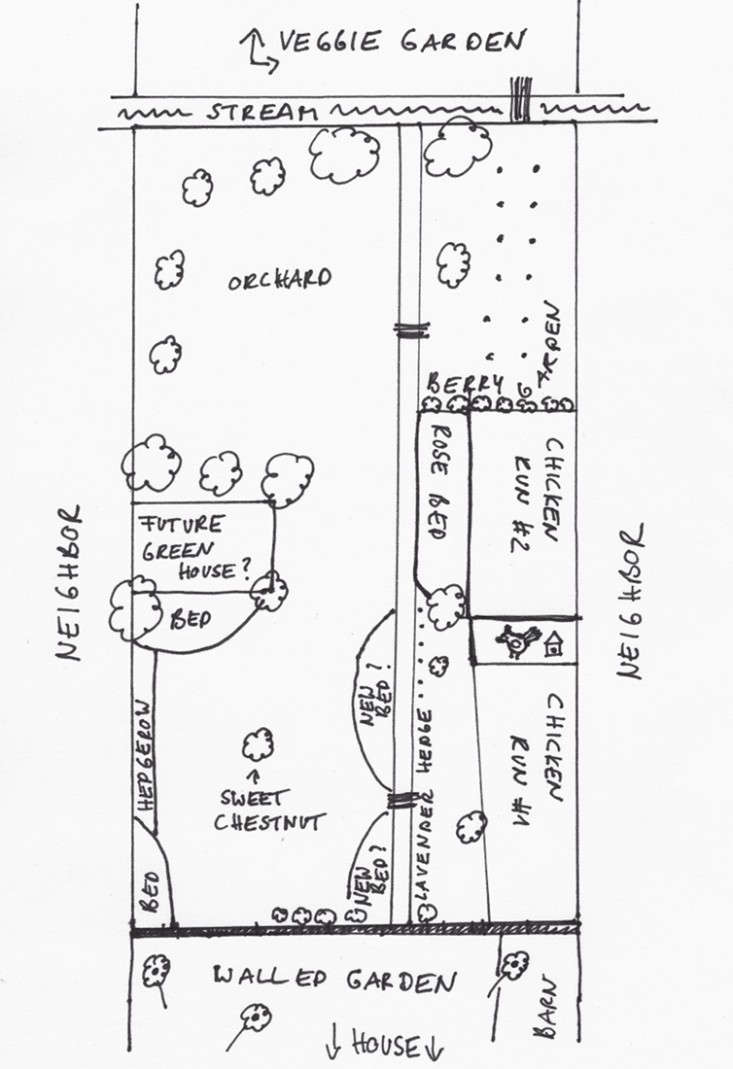 Above: Katrin’s hand-drawn plan shows the layout of the garden. In the future, they hope to push their garden’s production even further into winter with the addition of a greenhouse.

Continue your bucolic tour of Germany: