If you’re lucky enough to have a garden in a big city, you learn to accept the fact that while you’re out there, you’re in full view of everyone whose windows overlook your yard. Hanging an awning over your entire backyard or planting a tree big enough to screen everything isn’t a good option, since usually, getting the light you need to grow things is already a challenge.

So what are the best ways to make a small urban garden feel more private—or at least to create the illusion of privacy? For advice, we asked landscape designer Susan Welti, a partner in the Brooklyn-based Foras Studio. Susan has designed countless urban spaces; two of her gardens appear in our new Gardenista book.

Here are some of her ideas to create privacy in a small city backyard.

Photography by Matthew Williams for Gardenista, except where noted.

Is it really possible to have privacy in an outdoor city garden?

Let’s admit that it’s almost impossible to create as much privacy as you might want. “There are so many buildings surrounding you, and they’re so much bigger than you,” Susan says. “But while you can’t block out the buildings, what you can do is to create something beautiful and compelling that will hold the eye within the confines of the site, and make you feel enclosed and secure.”

“You can’t just throw in a big tree to block the view, because that also blocks the light,” says Susan. “In most city gardens there are trees in your sightline, but they’re often really big—such as oaks or maples or ailanthus. It’s nice to put in a tree that’s a more human scale. We use a lot of fruit trees—crab apple, dwarf apple, even pomegranate and fig. These all flower, which is always nice.”

When space is at a premium, Susan often uses trees that are pleached—trained and clipped to grow on a flat plane, like an espalier.

“Pleached trees are a powerful visual element, and you can control where they canopy out,” she says. Susan’s choice is hornbeam (Carpinus caroliniana), a native tree that takes well to pruning; she buys them already started off from Brooklyn’s Urban Arborists. “Pleached trees don’t bloom; it’s more about the shape and the beauty of the foliage.”

Can vines and climbers be used to create privacy?

“Vines are great for adding a green layer to a fence or pergola,” says Susan. “For an airy look, you want plants that have some visual porosity. We use Wisteria frutescens ‘Amethyst Falls,’ a native plant that’s less vigorous than Chinese or Japanese wisteria, and has a nice bloom.” For other flowering vines, she recommends clematis, honeysuckle, and crossvine, such as Bignonia capreolata ‘Tangerine Beauty.’ To create a wall of green, Susan suggests the vigorous, shade-tolerant Akebia ‘Shirobana’—but be aware that it’s considered invasive in some areas, so check with local authorities before planting, and be prepared to monitor its growth carefully. 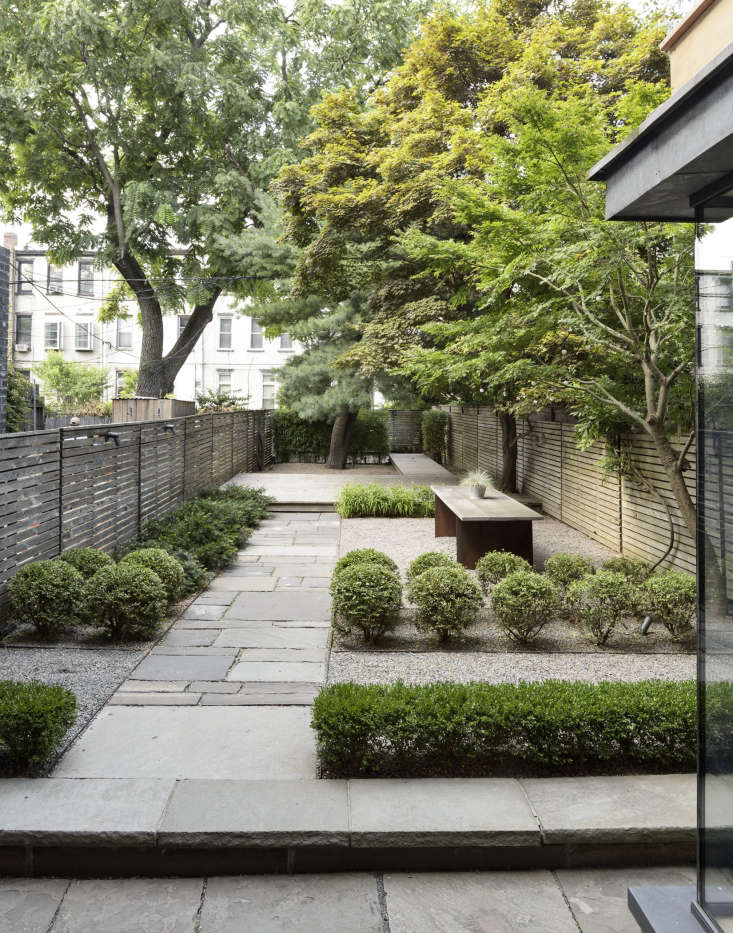 Can a fence add privacy without making a space feel small?

“A beautiful fence is a great thing—that’s your perimeter statement to the world,” says Susan. “When it’s thoughtfully designed and made of good materials, your eye goes to appreciating that rather than looking beyond it.” While a fence that’s fully opaque (that is, the slats touch each other) obviously gives the most privacy, Susan prefers a more delicate fence that allows air and light to pass through. “You can layer some climbing plants on it to give yourself more privacy, or add a row of narrow shrubs just in front of the fence.”

You can use shrubs to create privacy within the garden, perhaps subdividing space to make the yard more interesting, or screening off a section. Shrubs can also hide a fence, or create a sense of the natural world along one side of the property. Since they generally branch out to the ground, they offer a sense of solidity.

“When space is tight,” says Susan, “we use a number of fastigiate shrubs—that is, narrow and upright—such as ‘Graham Blandy’ boxwood, Ilex crenata ‘Sky Pencil,’ and Taxus baccata ‘Fastigiata.’ And when we don’t need shrubs to be narrow, we often use camellias—they’re evergreen, lush, and shade-tolerant, and they bloom in spring or fall. Others we turn to include viburnum, high-bush blueberries, and boxwood—always, whether it’s pruned or not pruned, sculpted or not sculpted.”

“We use grasses a lot,” says Susan. “They’re generally narrower than a shrub, but can be just as high—and their bloom makes them even higher. Besides the shape, we also prize them for their movement—with all those big buildings around, things can be very static. We like Panicum ‘Northwind’ (switchgrass) a lot—if it gets enough sun it can grow to seven feet. Another is Calamagrostis acutiflora ‘Karl Foerster.’”

Finally, when even more height is desired, there’s Fargesia nitida, a fountain-shaped, clump-forming bamboo that can reach 12 feet. “Bamboo has a lot to recommend it in the city—it’s evergreen, tall and narrow, and it grows quickly. More importantly, it gives a sense of movement and sound.” Phyllostachys bissetii bamboo can be used to make a human-scale hedge of bamboo—“We just whack off the top and sides.” (Before planting Phyllostachys bissetii, always check to make sure it’s not considered invasive where you live. You’ll need to install a root barrier before planting, and watch closely for breeches and runaways.)

Can you use plants to create privacy in a city front garden?

Most front gardens in the city are narrow and close to the sidewalk. Susan favors a small tree whose canopy will screen the parlor floor windows. A deciduous tree works best for this purpose since it will allow in more light on dark winter days. “Underplant the tree with an evergreen layer so the tree will look great even without its leaves,” she says.

What kind of structures can provide privacy in a city garden?

Susan’s projects are generally in Brooklyn or Manhattan, where fences can’t be higher than six feet. She sometimes bypasses that rule by building a narrow pergola parallel to and just inside the fence, as close as six inches. “It’s a way of cheating, because the height of the pergola isn’t restricted—it can be eight feet if you want. It gives you some green height if you grow vines on it, and people can sit under it. Plus it doesn’t take up too much growing space.” Check local regulations to find out about permitted fence heights in your community.

Are the design rules the same for a small suburban backyard?

In the suburbs, your neighbors’ houses probably aren’t as tall as the surrounding buildings in a city, and there are usually more trees. “That gives you more to borrow from,” says Susan. “If the yards around yours have a lot of maples, for example, you might put a small maple on your property as a way of working the surroundings into your theme. Gardening is never as difficult in suburbs—you have more light, and all sides of the house to work with. City gardens are a much bigger challenge.”

For more ideas to create privacy in a garden, see our curated guides to Garden Design 101, including Fences & Gates and Shrubs: A Field Guide to Planting, Care & Design. Read more:

Greatest Hits 2022: A Small Brooklyn Backyard Where ‘Every Detail, Every Inch’ Is Important