One of the best surprises of my fall garden belonged to the sunchokes, Helianthus tuberosus. Last November I did what you are not supposed to do—planted an impulse-purchase of supermarket sunchoke tubers and waited to see what happened (I have committed this heresy with garlic, ginger, and potatoes, too, and have never been sorry). I was happy to see the green shoots emerging in late spring.

Read on for my recipe for Sunchoke Soup: 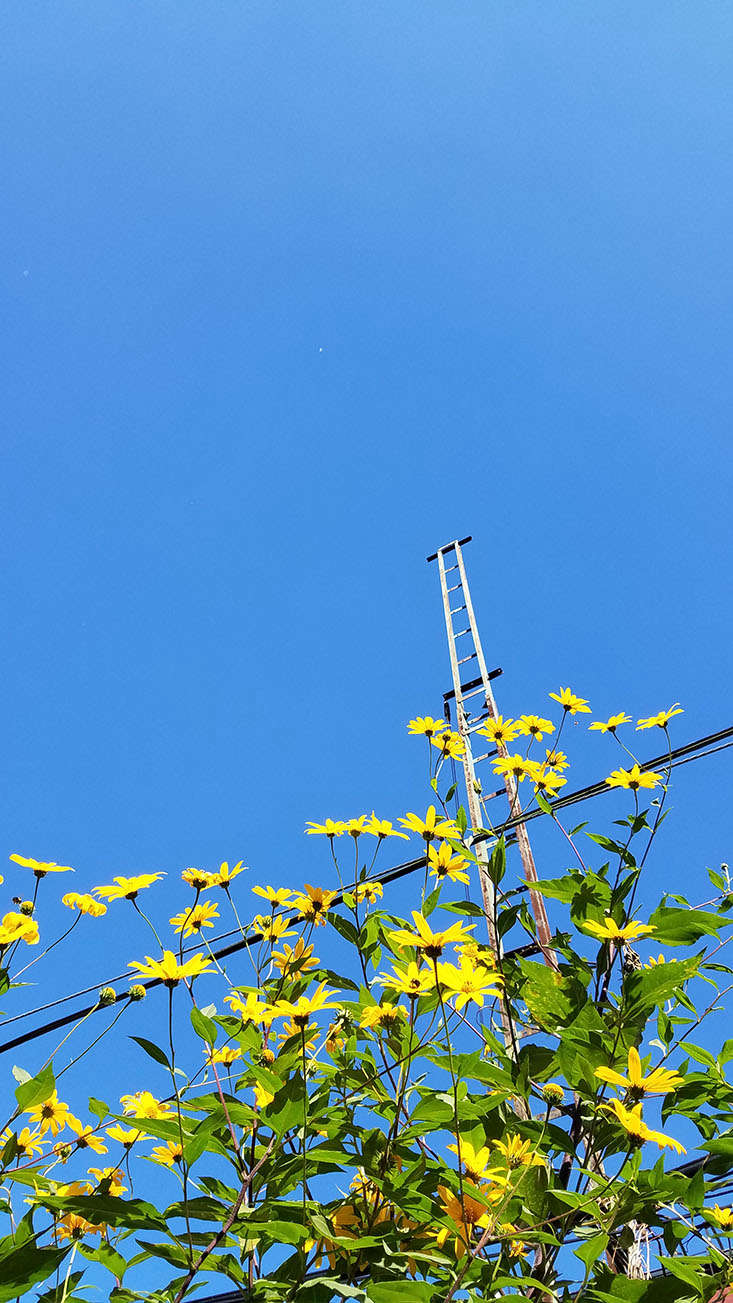 Above: I planted the sunchokes for two reasons: one, to create a leafy screen between us and our neighbors in front of an unattractive mesh fence, and two, to dig and eat the nutty tubers in late fall. The surprise was the statuesque stalks: the plants were in excess of ten feet tall by the middle of October. 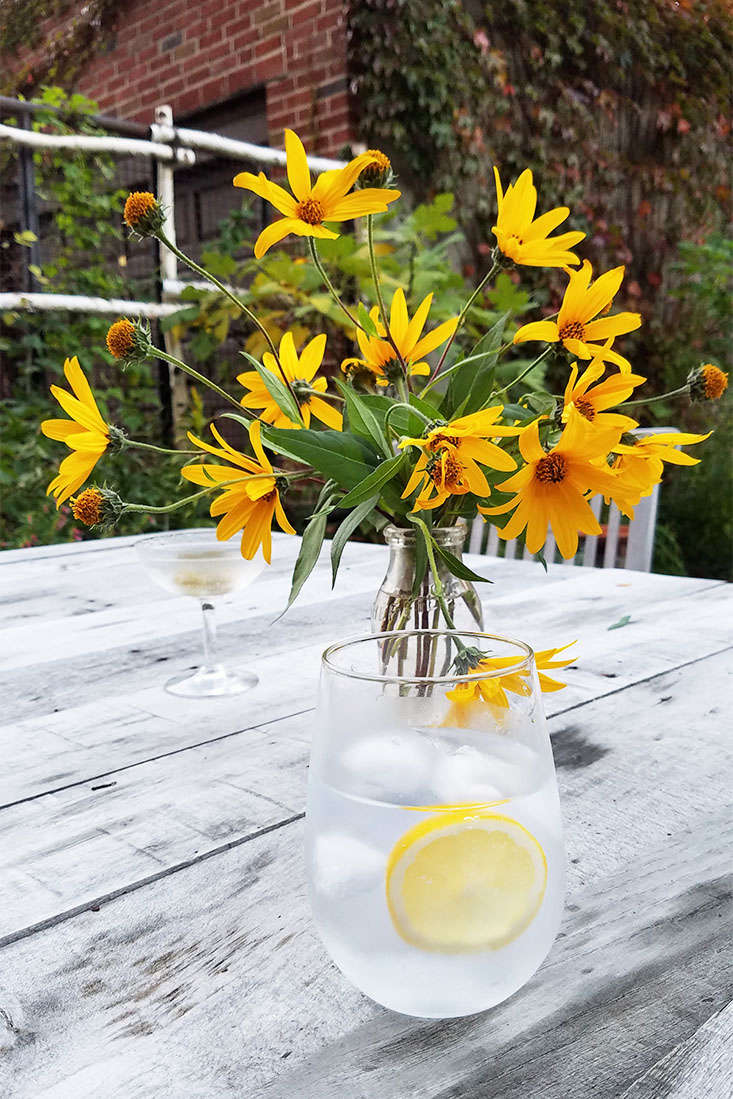 Above: Another bonus was their show of long-lasting and very late-season yellow flowers which bloomed for a month, as the asters below them were in full swing and the Boston ivy began turning red. 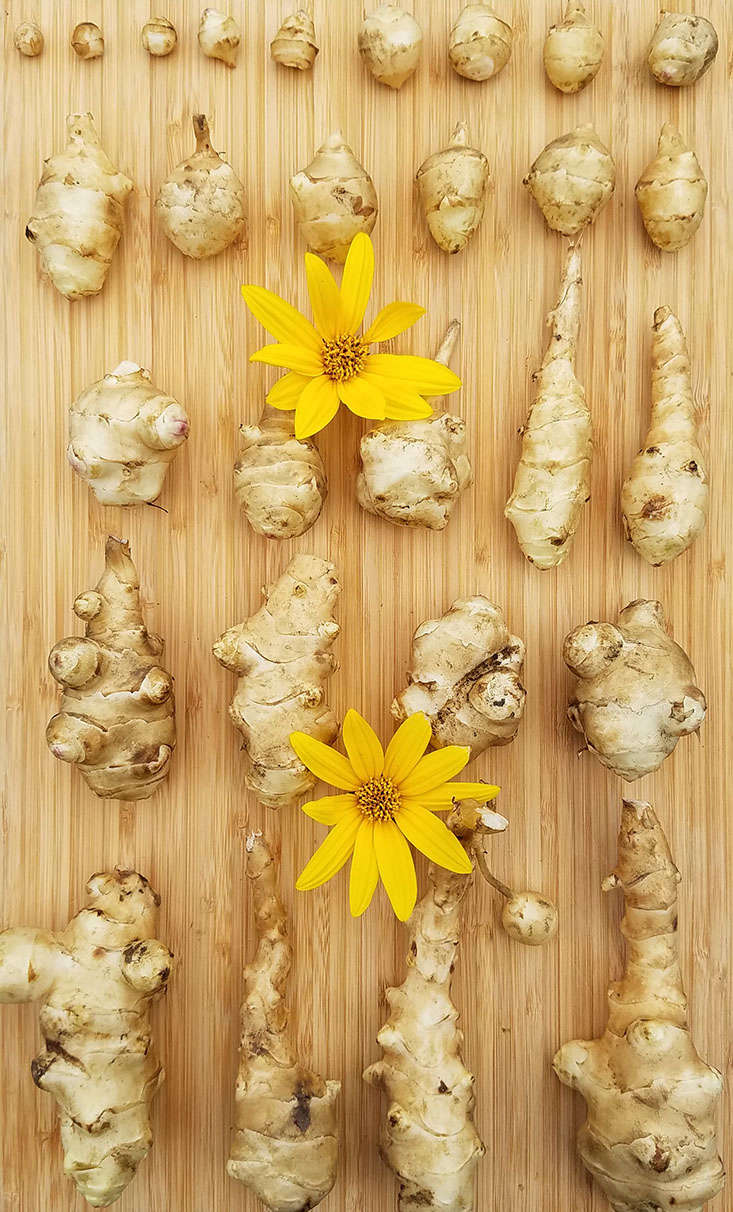 Above: Sunchokes are native Americans, and grow in most states except in deserts. They were an important crop for Native Americans, and were introduced to Europe in the early 17th century where they became and remain a popular food. Also known as a Jerusalem artichoke, the plant is connected neither to Jerusalem nor to artichokes, botanically; it is a corruption of Girasola articiocca (sunflower artichoke), an early Italian name for the plant. The modern American “sunchoke” dates from the 1960s, part of a marketing ploy to improve the unfamiliar tuber’s sales in its homeland. 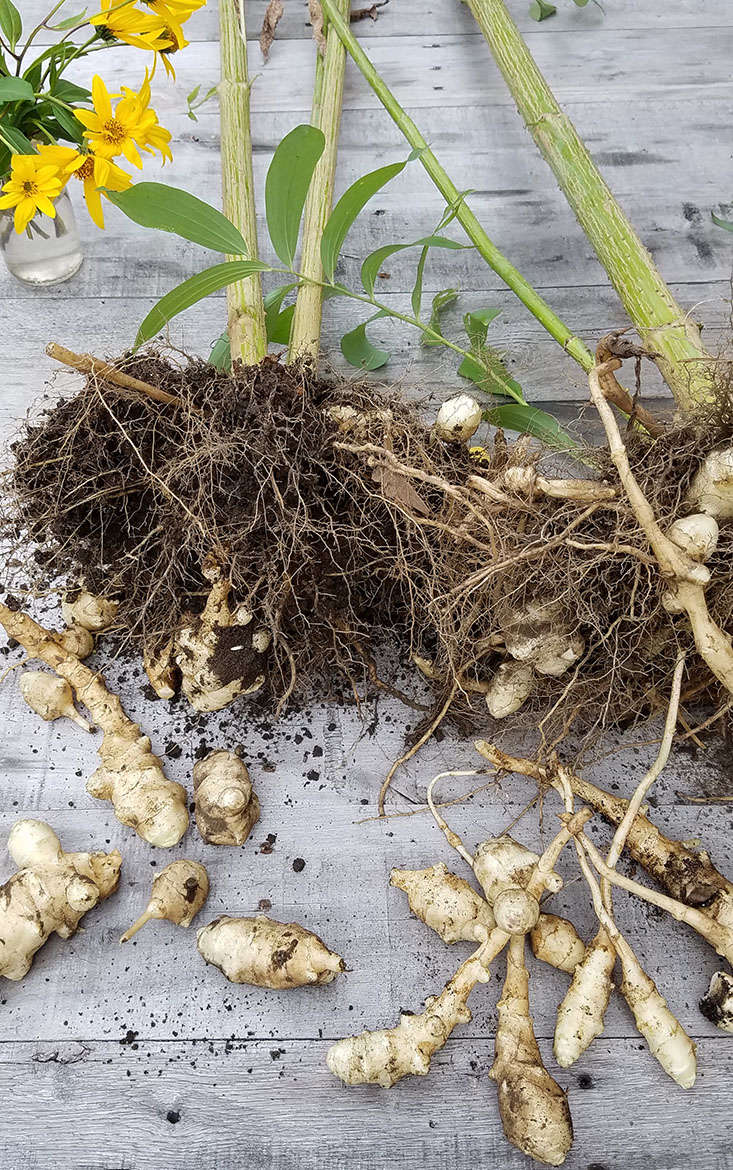 Above: Food or foe? Opinions differ on whether sunchokes are a good crop or a bad weed. They are prolific. Their tuber-bearing rhizomes spread fast. My own two tubers yielded a return of 20 pounds (an excellent return on investment). But when I dug them up, I made sure to find every last one of the tubers, to prevent a takeover next year. I then re-buried two of the fattest specimens. Planting them in a contained bed will help restrict their spread if you do not feel up to the task of exhaustively turning the soil for every tuber at harvest. When to plant? Now (late fall), or early spring. 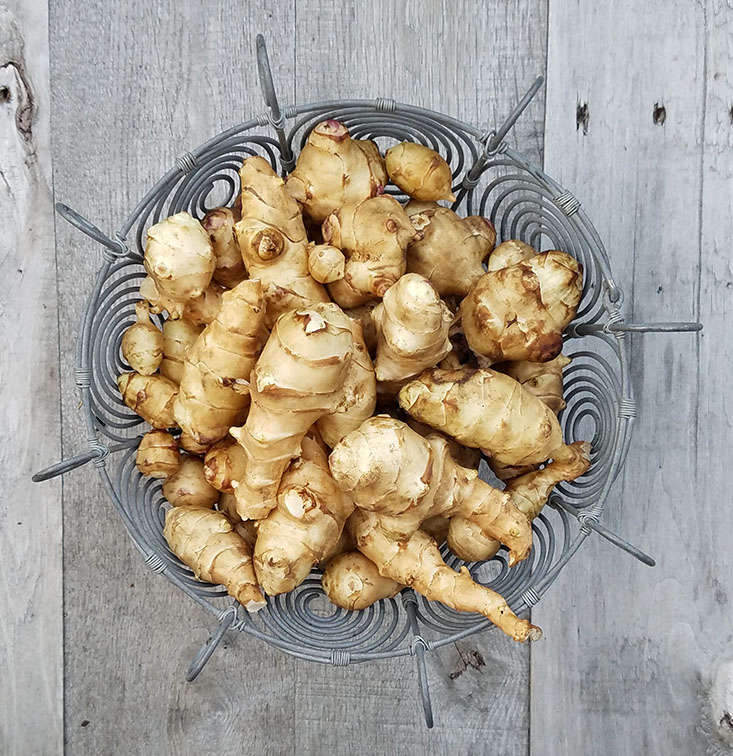 Above: Once harvested, store the tubers in plastic bags in the vegetable crisper, as they tend to dry out and become limp. Better yet, dig them as you need them. Frost makes them sweeter and they can be harvested well into winter, as long as the soil is workable. 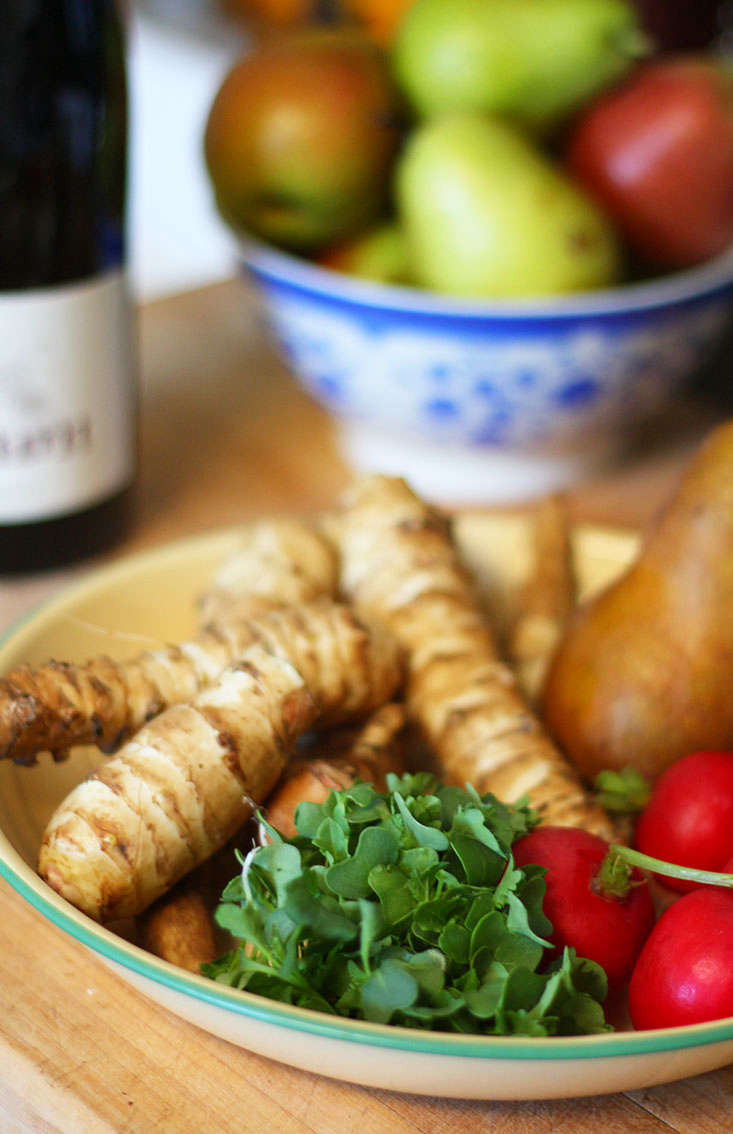 Above: How to eat sunchokes? I love them raw—peeled and sliced thinly into cold-season salads. They are as crisp as water chestnuts and have a slightly nutty flavor. Mario Batali serves them as a carpaccio, sliced paper-thin. When raw, use small amounts at a time (one to two large tubers) as sunchokes enjoy a reputation of making some people gassy—one of their ruder names is (f)artichokes. They contain varying amounts of inulin, a sugar that we cannot digest easily.

René Redzepi, cult-status chef of Copenhagen’s Noma, really has it in for sunchokes, and refuses to include them on his menu. Clearly, he had a bad reaction to them. But many, if not most, chefs and diners have not. Bad news gets more headlines than good, and I can only say I have never experienced this problem, but am aware that others have. Always peel the tubers and eat raw tubers in moderation. Cook peeled sunchokes in boiling water, and discard the water (inulin is water-soluble) before pureeing like mashed potatoes or turning them into soup. Delicious. Once tender, they can be graduated into gratins, bakes, hashed brown-chokes, or crisped in some foaming butter with a sprinkling of fresh rosemary needles. 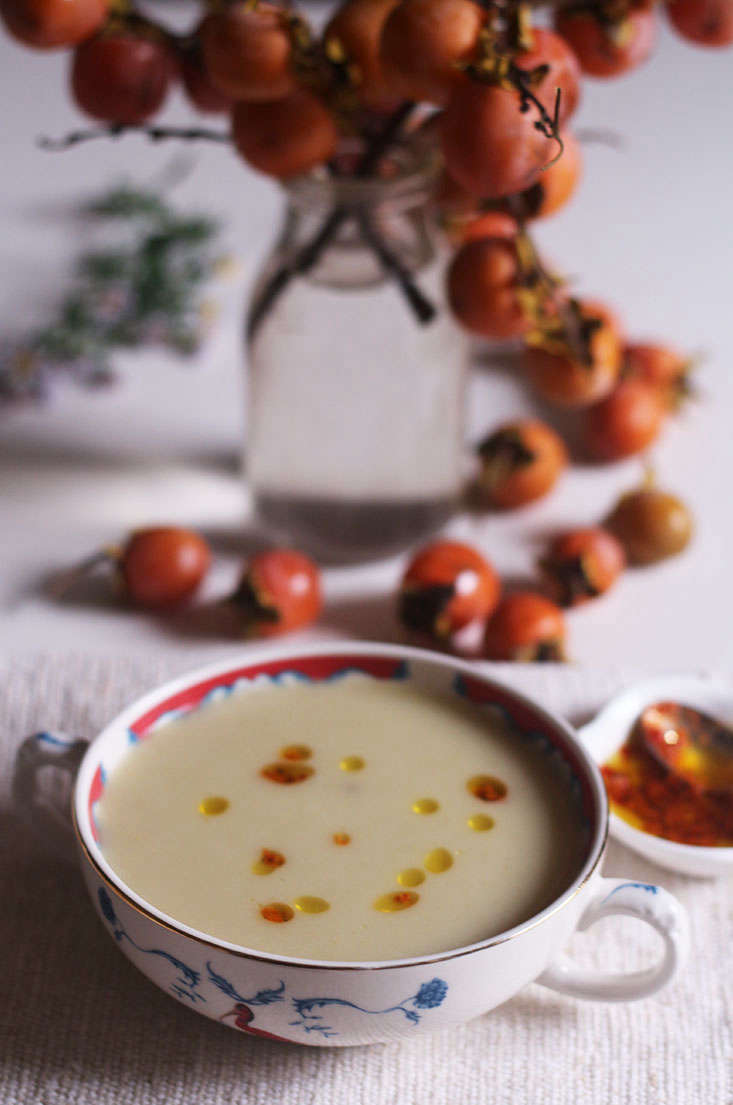 In a saucepan of water over high heat bring the sunchokes to a boil. Turn off the heat and cover the pot. After an hour drain the water from the tender sunchokes. Over medium-high heat warm the oil in the saucepan. Add the cumin, and toast gently for 30 seconds. Add the tender sunchoke slices and the clementine juice. Cook until most of the juice’s moisture has evaporated. Add the chicken broth, increase the heat, and cook at a simmer for another five minutes. Allow the liquid to cool a little and puree until smooth in a blender. Pour through a mesh strainer back into the saucepan and add the fresh lemon juice. Taste, and add a pinch of salt.

I like to serve this creamy soup with a chile oil made by chopping roasted red jalapeños finely and blending with a little olive oil.