The other day when I phoned Marjorie Harris, Canada’s leading garden writer, she was tromping through her waterlogged Toronto backyard to check on her sump pumps.

Canada has rough winters, a short growing season, and fickle microclimates (especially near the Great Lakes, where half of a town’s gardens may have sandy soil and the other half clay). This creates a conundrum. The typical Canadian garden harkens to the English or French roots of the country’s 17th and 18th century settlers. But many of the tender perennials and flowering plants that flourish in milder European climates can’t survive a northern winter. That means most gardeners in Canada also rely on a secret weapon: evergreen trees and shrubs that will provide year-round structure and interest.

“Canadian gardens are very tailored looking,” says Harris, the author of The Canadian Gardener and nearly 20 other books. “We don’t have a lot of the fluffy stuff.”

Wondering what you need to design a garden that looks good year-round in any climate? Read on: 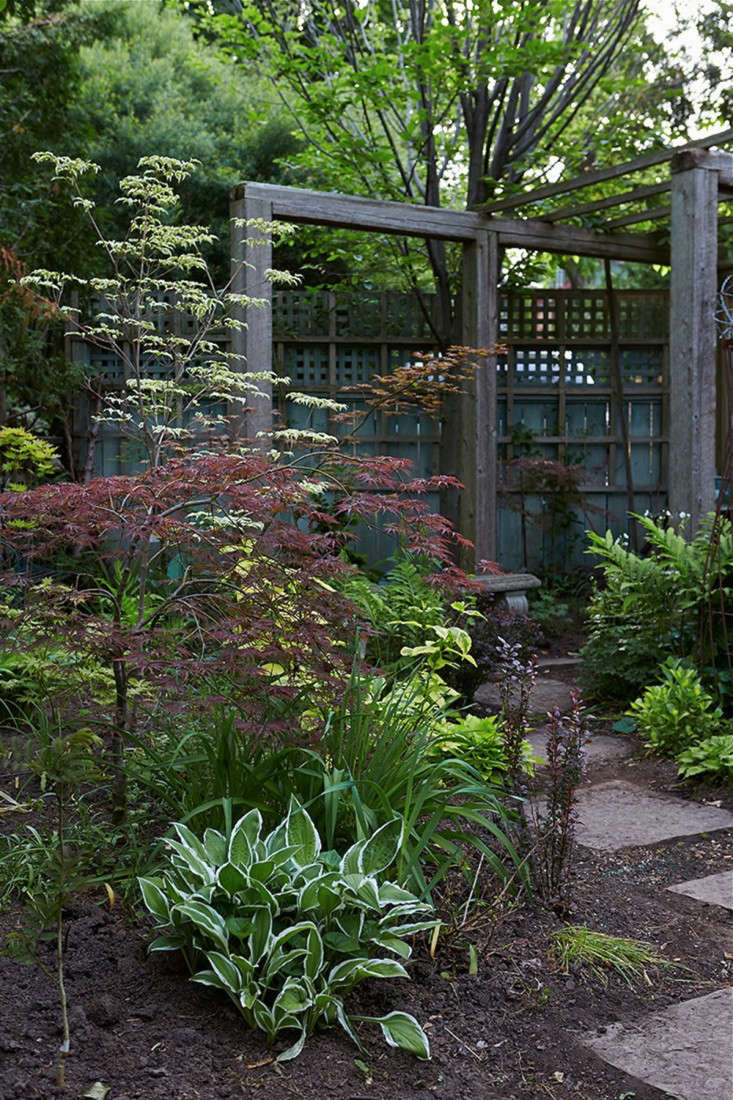 Above: A shady corner of Harris’ garden in Toronto is planted with hostas and colorful Japanese maples (back). Photograph by Andreas Trauttmansdorff for Gardenista.

Define the permanent structure of your garden with materials–bluestone pavers, brick paths, wooden arbors–that will look good in all seasons. 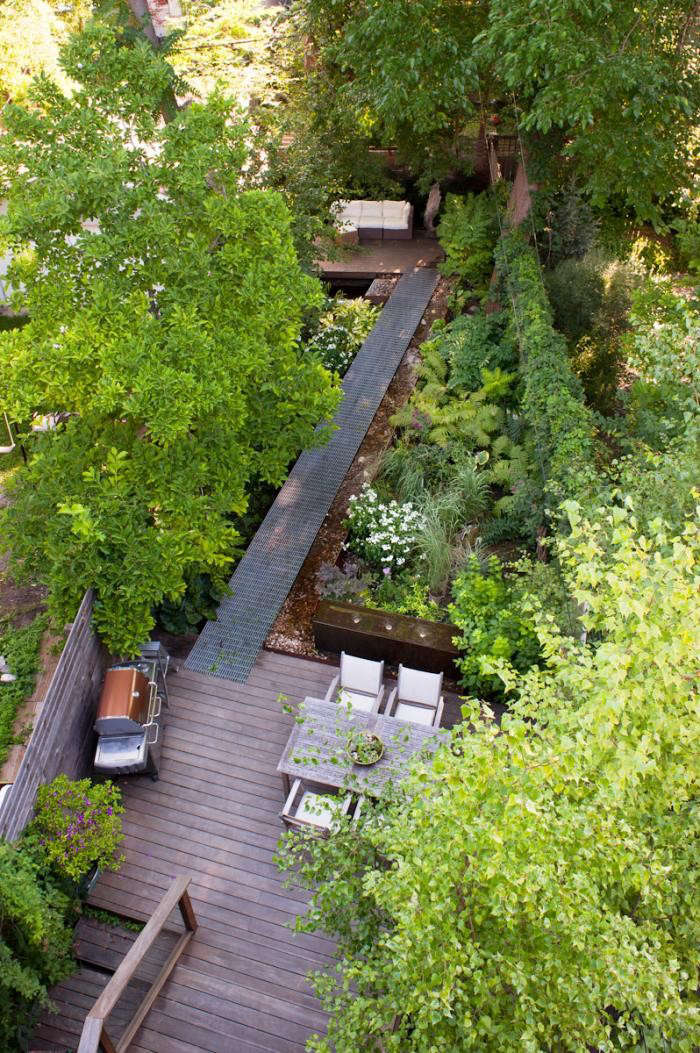 Above: Photograph courtesy of Earth Inc. For more of this garden, see Earth Inc. in Toronto: A River Runs Through It.

By “year-round,” Harris means not just evergreens. Trees with attractive bark, perennial grasses that will look good beneath a layer of snow, and hardy flowering shrubs are good choices. “What would I kill to have in my garden?” asks Harris. “I’ll take all dogwoods and viburnums. I am adamant that a plant has to have color, shape, and form that looks good in all seasons.” 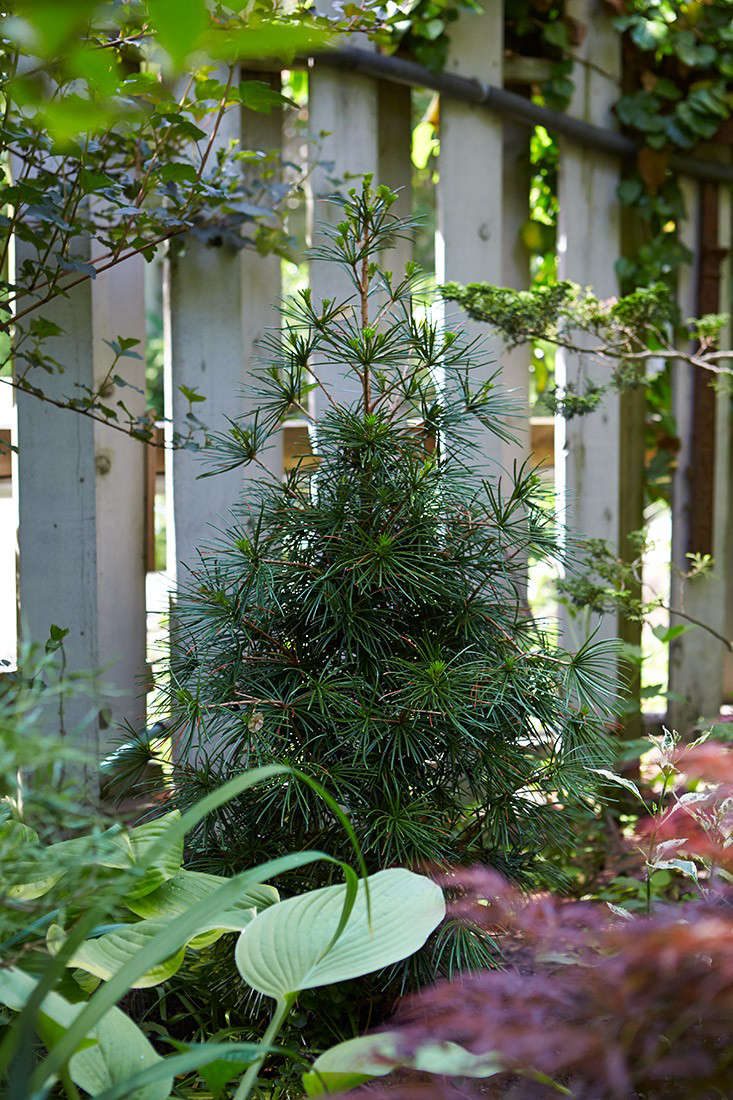 Above: In Harris’ garden, a Sciadopitys verticillata grows against the fence. Photograph by Andreas Trauttmansdorff for Gardenista.

“In my mind, a Canadian garden relies on a combination of trees and shrubs, many evergreen,” says Harris. “It’s a tailored look.” 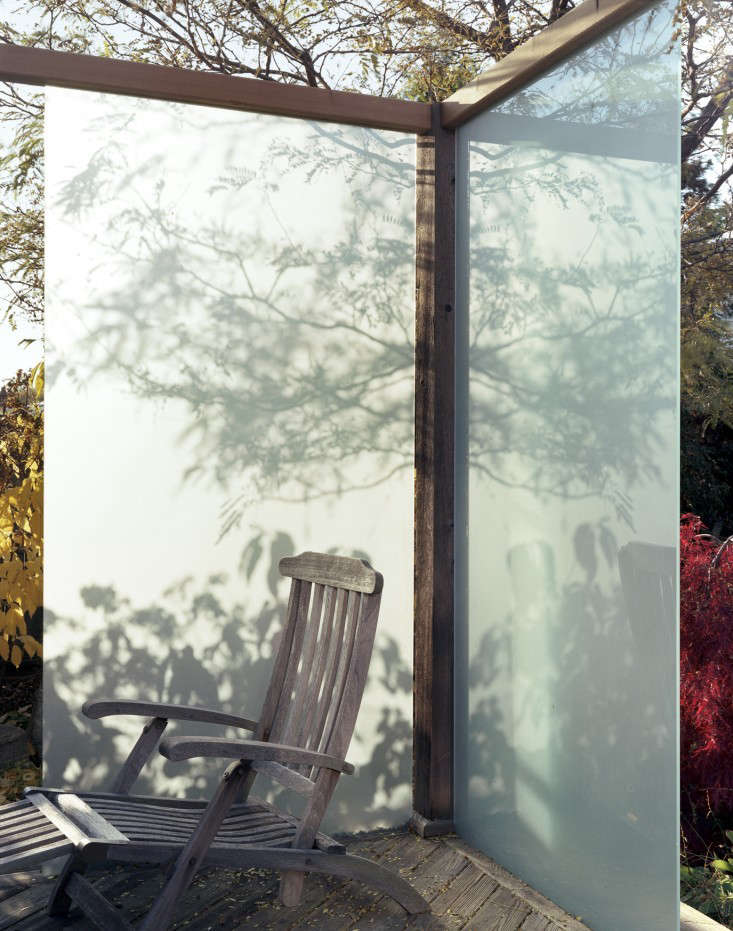 Plant showier plants at eye level where they’ll be a distraction. “Grab the attention as quickly as possible,” says Harris. “I also push for having things in layers–grow something that’s in between low and high to fill in gaps.” 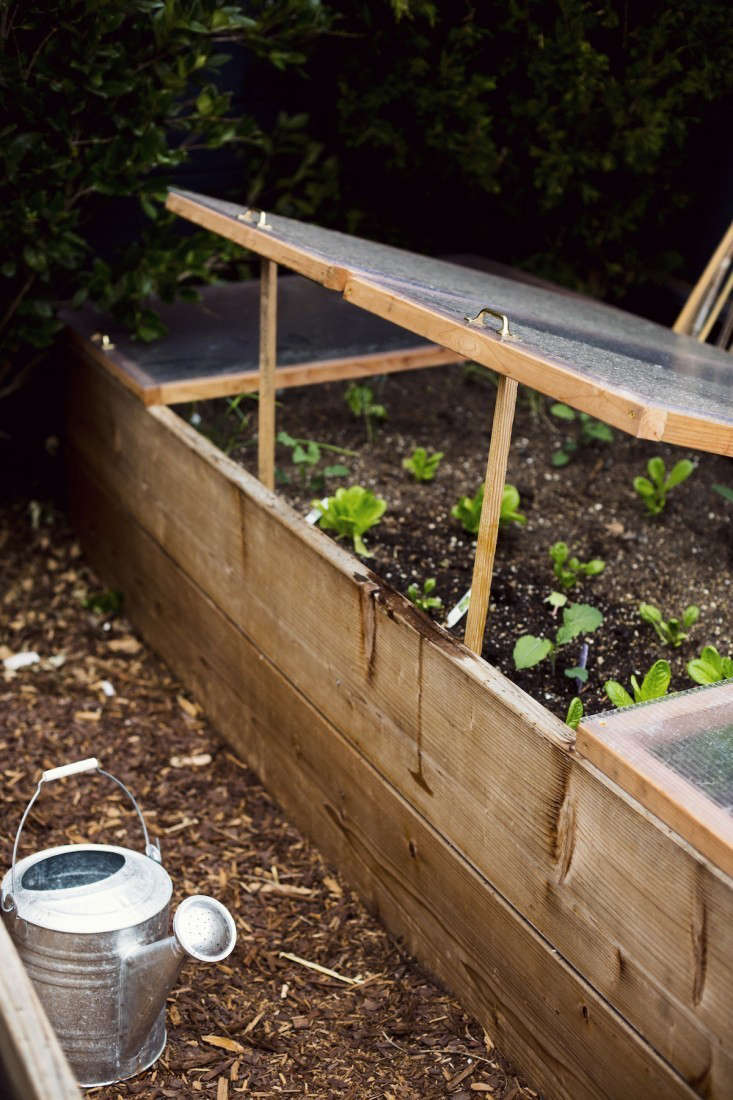 Above: In a cold climate, start edible seedlings in a cold frame. Photograph by Jamie Beck courtesy of Ann Street Studio.

If last year’s plants died, try something different this year. Ask neighbors what thrives in their gardens and ask for cuttings. The vagaries of the harsh climate in Canada has required gardeners to develop new species or hardy varieties of perennial plants. In Canada, the “new seeds for a new land” movement spurred on horticulturalists in the 20th century, according to A History of Canadian Gardening by Carol Martin. In that spirit, don’t be afraid to experiment in your own garden. 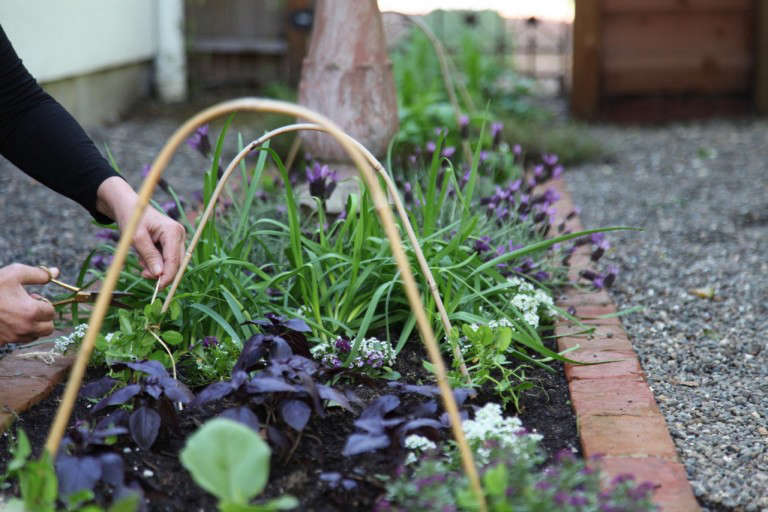 Above: Photograph by Meredith Swinehart.

“I come from a generation where everybody automatically grew vegetables because you had to–that’s how you supplemented your diet,” says Harris. “Now a lot of people are growing them in their front yards. It’s adorable to see this going on in Toronto. But in a city you have to take into account what kind of traffic you have on a street and what kind of fallout you might have from exhaust fumes.” 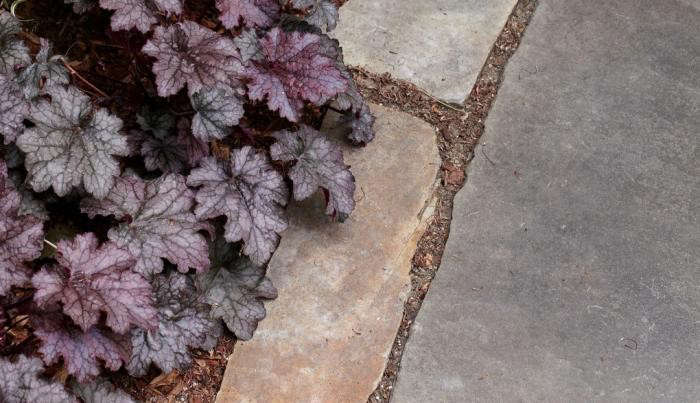 Above: Heuchera, hardy to zone 4, edges a path. Other good choices would be ajuga, Canadian wild ginger, and perennial thyme. Photograph by Marla Aufmuth for Gardenista.

Create small islands of calm in areas of the garden where wind and other elements are held at bay. Grow hardy ground cover between pavers, for instance, or plant a small tree in a corner of the yard where it’s protected by two sides of your fence. 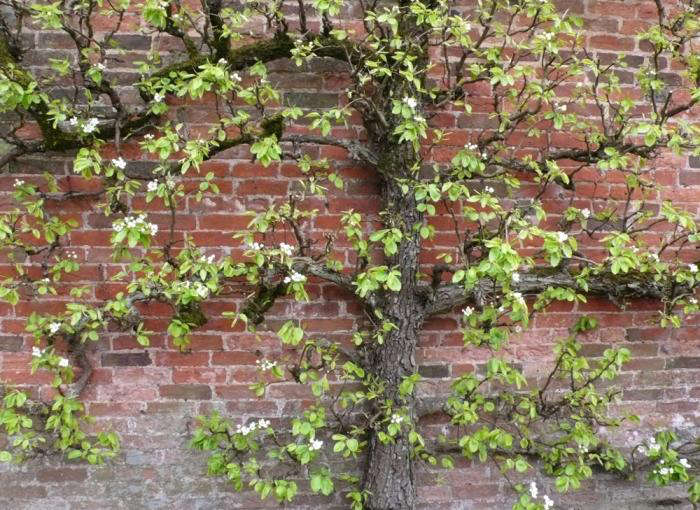 Canadian gardens are inspired by British and French traditions that early European settlers brought with them. For a similar look, you can edge paths with low hedges, plant an espaliered tree against a fence, or create a grid formation for garden beds. 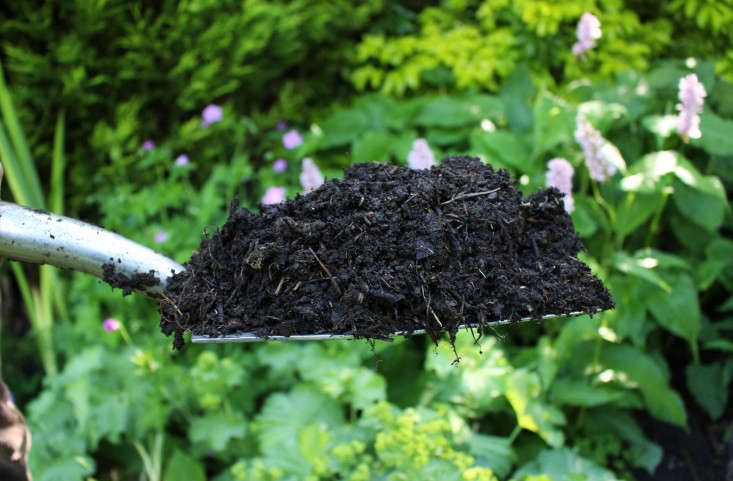 Above: Photograph by Jim Powell for Gardenista. For more, see Composting: Are You Obsessed?

Don’t try to cut corners when you prepare the soil. Add compost, compost, compost. And then, “Add more compost,” says Harris. “And mulch really deeply if you have cold, cold winters and hot summers. I tell clients that the plants are just the last thing you pay for in a garden.” 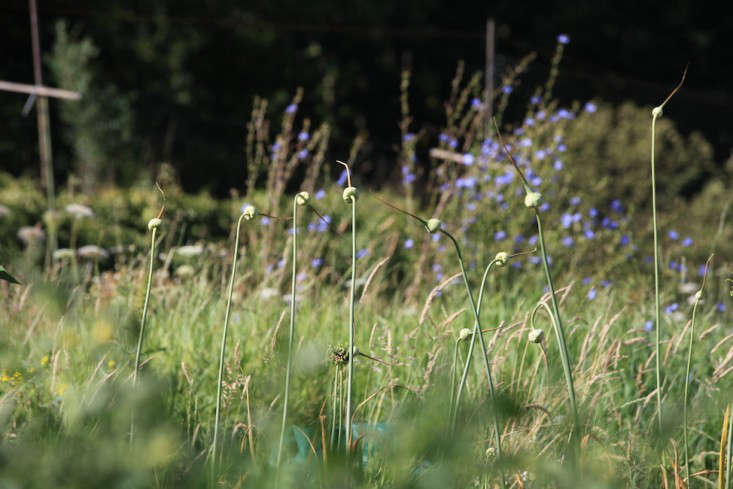 Above: Garlic and grasses mingle with wildflowers at Red Damsel Farm near Victoria, Canada. Photograph by Clare Day.

If you see something blooming its head off by the side of the road with no encouragement beyond motorists’  exhaust fumes, that’s a plant that likes your climate. Find out its name and sprinkle some seeds in your garden.

Want to know more? Marjorie Harris’ latest book is Thrifty Gardening from the Ground Up ($15.95 from Amazon).

For more in this series, see 10 Garden Ideas to Steal from London.

Thrifty Gardening: From the Ground Up

A Guide to Gardening in Canada

Hover Pots: Gardens That Hang from the Ceiling