A garden is a place out of time, a parallel universe. It is a refuge for living things and also: for lettering. Handwritten words, so rare these days, are still drawn and chiseled for people with imagination and a love of words.

With good words come beautiful letters and where better to put them than in that last refuge, with the help of such London-based stone carvers as Philip Surey and Kate Douglas:

Photographs by Philip Surey, except where noted. 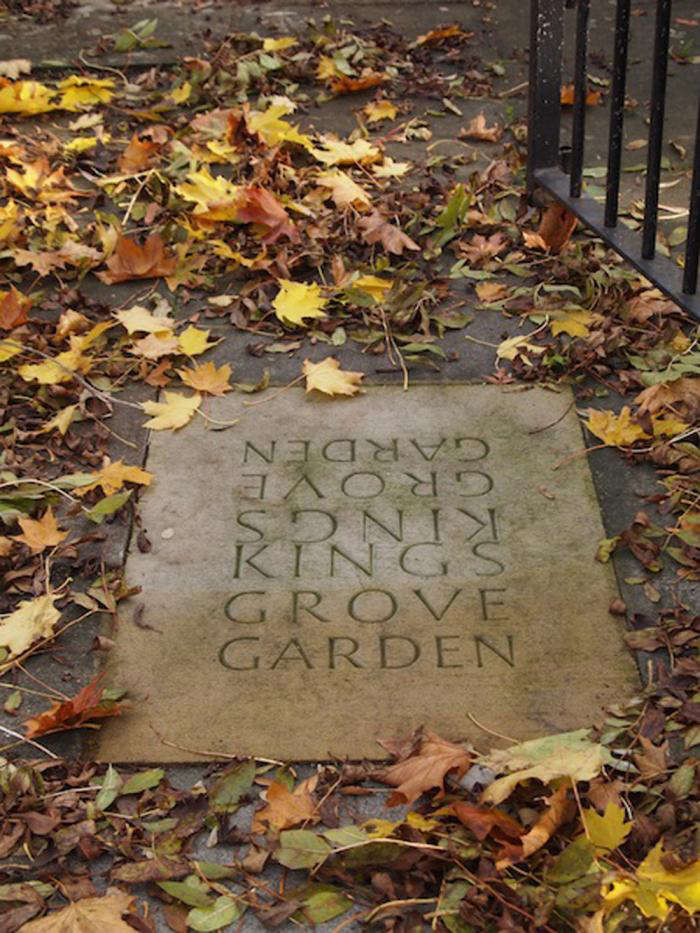 Above: Like the scripture-writing Benedictine monks of the Middle Ages, letter carvers of the 21st century do not make mistakes. Perfection is attainable. In south London, the King’s Grove Garden was created by local residents out of disused space owned by the local authorities. This piece of dual purpose York stone with its “v-cut” carving by Philip Surey has been placed at the entrance. 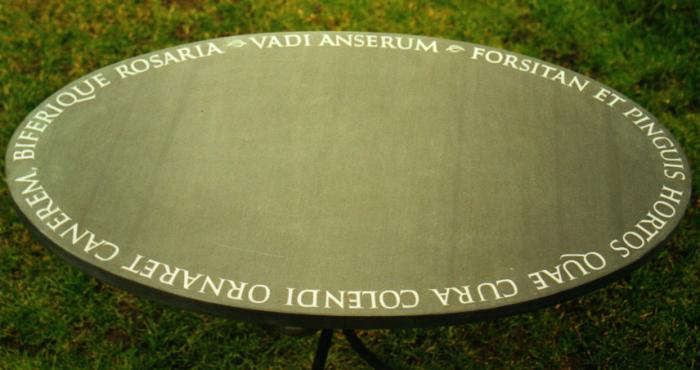 Above: A round slate table with Latin words carved and painted in off-white enamel. Taken from Virgil’s The Georgics, this was a commission for Philip Surey, whose studio is near the Old Kent Road, London. Tablets, plaques and boulders in the grass do not have to be inscribed in Latin or have anything lofty to say. Either way, they do add a sense of permanence. 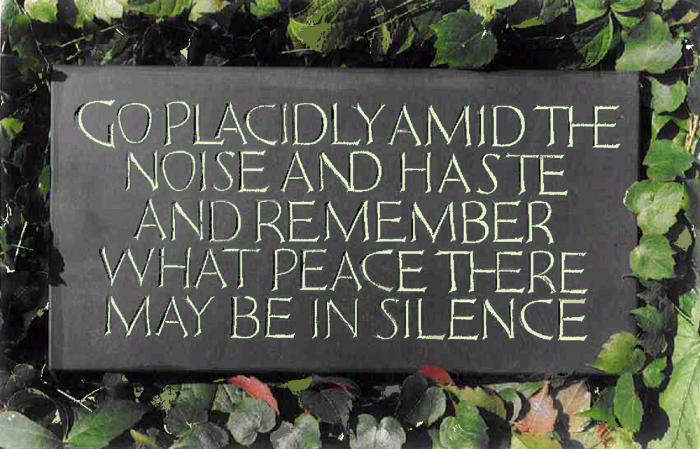 Above: A calming plaque in an ivy-clad wall. The lettering by Kate Douglas is influenced by the typographer Eric Gill. 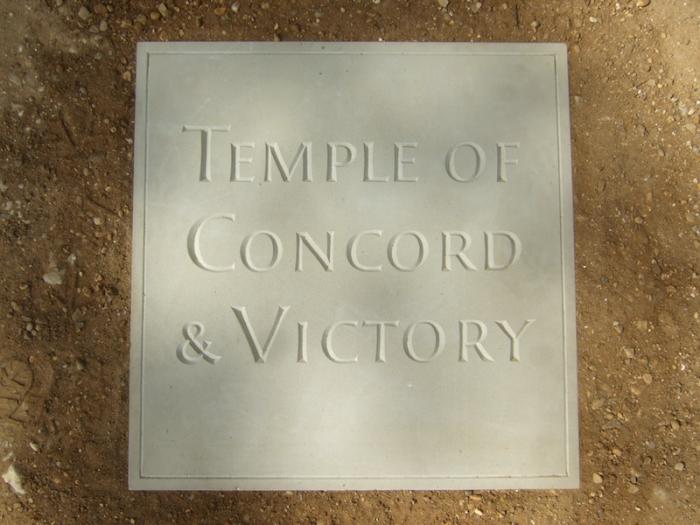 Above: This is one of 25 York stone tablets set in the ground at Stowe landscape gardens in Buckinghamshire, carved by Philip Surey. Horizontal information can be less obtrusive while complementing the various temples and statues which they are intended to identify. 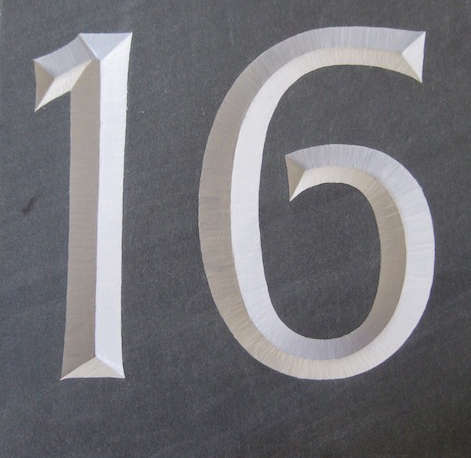 Above: This kind of carving is v-cut, or carved in, though the flattening effects of photographs can make it look like an optical trick. The door number is carved in slate, with off-white enamel-painted numerals, by Philip Surey.

Above: Kate Douglas is also a gifted illustrator, a bonus when she is asked to provide curly vines as well as letters. 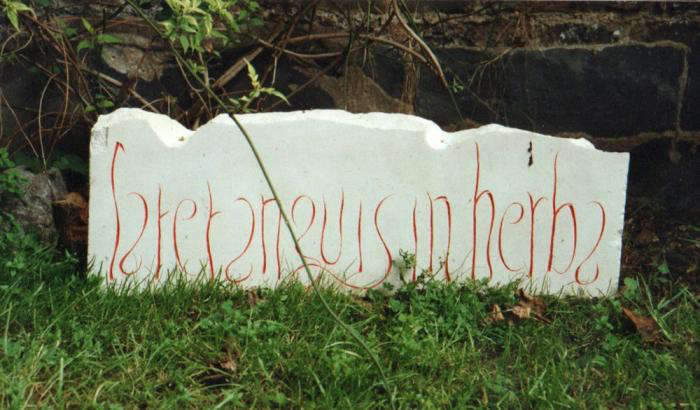 Above: “I originate the letterform to suit the work,” says Philip. “Latet anguis in herba” carved and painted on this piece translates as “A snake in the grass.” “It’s really just a play on words,” he says. 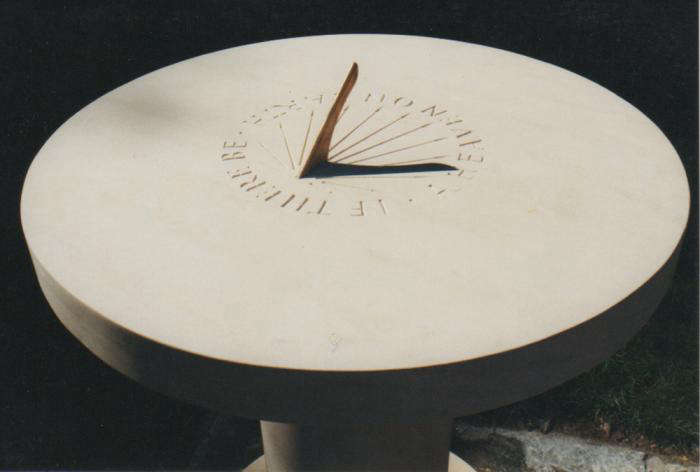 Above: “If there be a heaven on earth” says the top of the sundial. Its base says, encouragingly, “Tis here, tis here, tis here.” Carved from Portuguese limestone by Philip Surey, this commission has made its home in the South of France.

The Week in Review: 13 Things Keeping Us Busy As Squirrels

Priceless Tulips: Yours for $25

Now Coveting: Purposefully Made Goods for the Garden from Goodee

Gift Guide 2018: For the Organized Gardener