Pigweed is one of the common names given to a clutch of Amaranth species that crash parties where they are not wanted. Including Amaranthus retroflexus (red root pigweed), A. spinosus (spiny pigweed), A. palmeri (Palmer’s pigweed), and A. hybridus (rough pigweed), these uninvited agricultural and garden guests are so ubiquitous that they seldom invite closer scrutiny from farmers and gardeners, who pull them up by the roots, or douse them in Roundup (some species are now glyphosate-resistant, as a result).

In the United States most people view these plants as weeds, but in the Caribbean amaranth is prized as callaloo. In India amaranths are cultivated for their seeds (pseudo-grains) and leaves. Wild amaranths are eaten in South Africa as nutritious pot herbs.

Despite our distaste for the plants, amaranths are essentially American, and well known to many Native Americans who used the whole plant as food. And they are one of the oldest food crops in the world. Ask the Aztecs, who prized the prolific and tiny seeds, interest in which was resurrected only as late as the 1970s. Amaranth seeds have now reached gluten-free, superfood cult status.

I like the leaves. And I welcome summertime and its crop of amaranth, preferring the cooked leaves’ firmness to spinach, which isn’t in season in hot weather, anyway. Think of the pigweeds as summer spinach, filling the leafy gap between late spring and autumn, now that the season has turned a corner and is beginning the free fall to September, with August’s glut in between.

Read on for step-by-step instructions to make Pigweed Tacos. 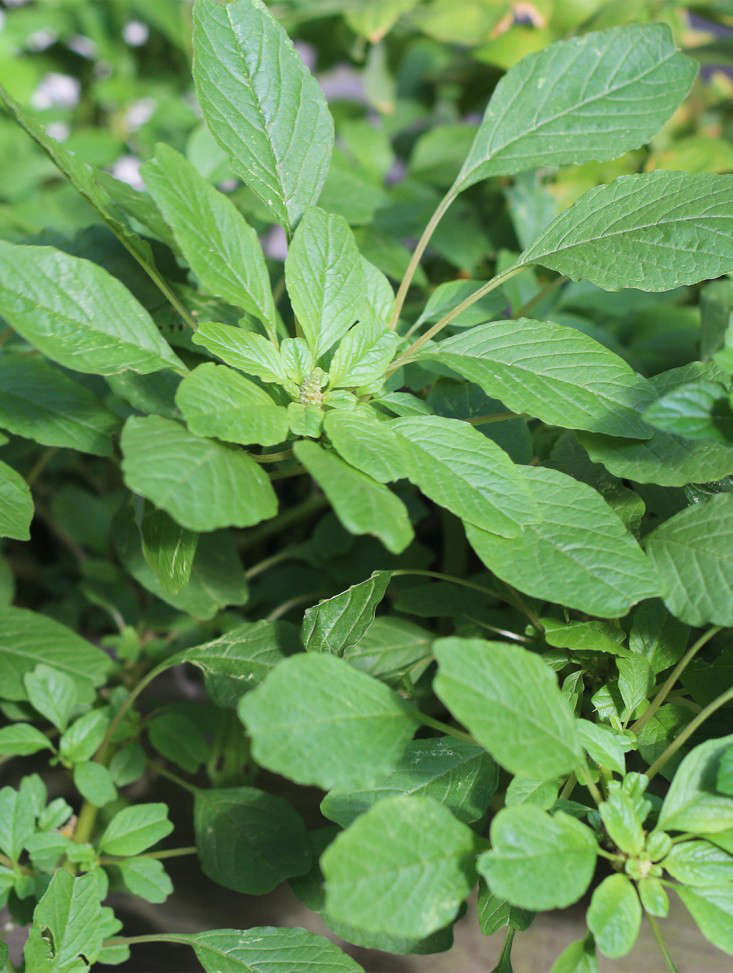 Above: Amaranths are nutritious, stuffed with vitamins, folic acid (vitamin B9), minerals, and protein. The plant is edible from tender stems through leaves, flowers and seeds. The cooked leaves can be used variously as simple green side dishes, in quiches, green Mediterranean-style pies, bruschetta toppings, pestos, soups, and saags.

Above: Wherever I have gardened pigweed has followed me. Or got there first. On a rooftop in Cobble Hill, Brooklyn, it volunteered one year in a pot where a beautiful rose grew. I recognized it as one of the morogs (edible wild greens) that are gathered in South Africa, my homeland. So I ate it, on toast. It was earthy and delicious. 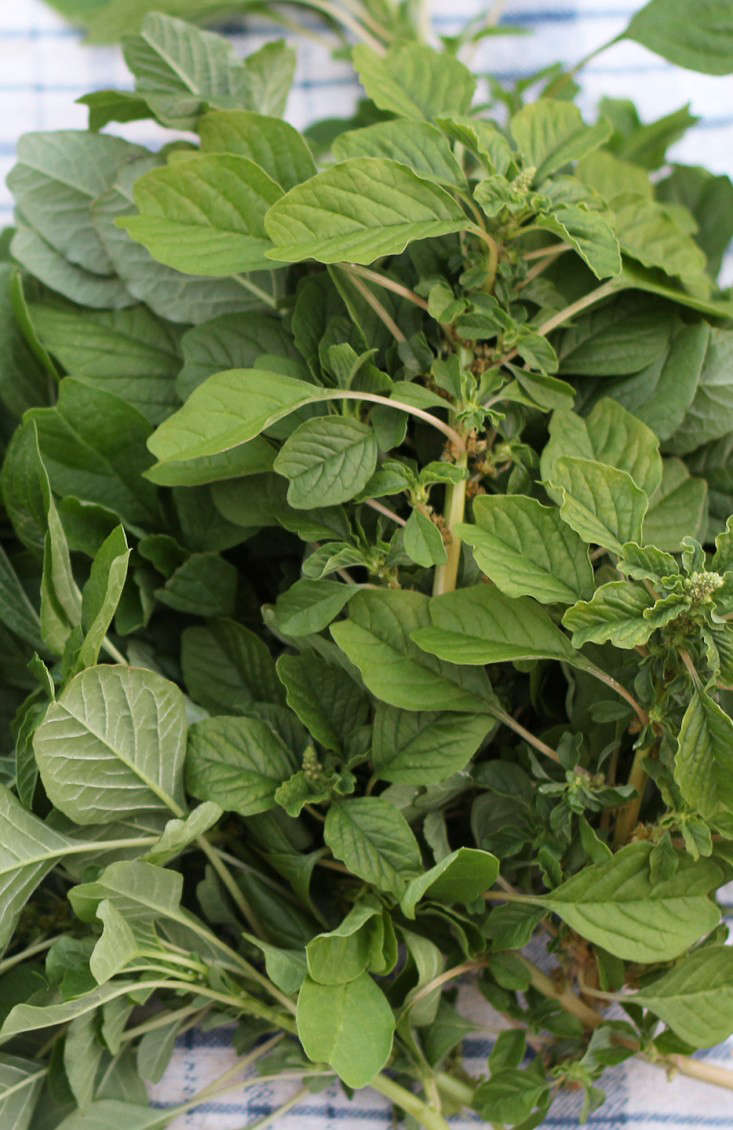 Above: On our Harlem terrace pigweed appeared and competed with the equally tenacious (but deliberately planted) jewelweed. I turned it into pesto.

But it was so prevalent last summer when we moved to Carroll Gardens (Brooklyn, again) that I yanked it out along with the other weeds that crowded the vegetable plot. I didn’t even bother to eat it. Which was perhaps a good instinct. Amaranth is useful in phytoremediation of soils: it absorbs heavy metals, and we had high lead levels. It also absorbs a great deal of nitrogen (like spinach), so do not collect vast quantities from highly fertilized agricultural fields. Infants should not be fed amaranth as too much can cause blue baby syndrome (methaemoglobinaemia). 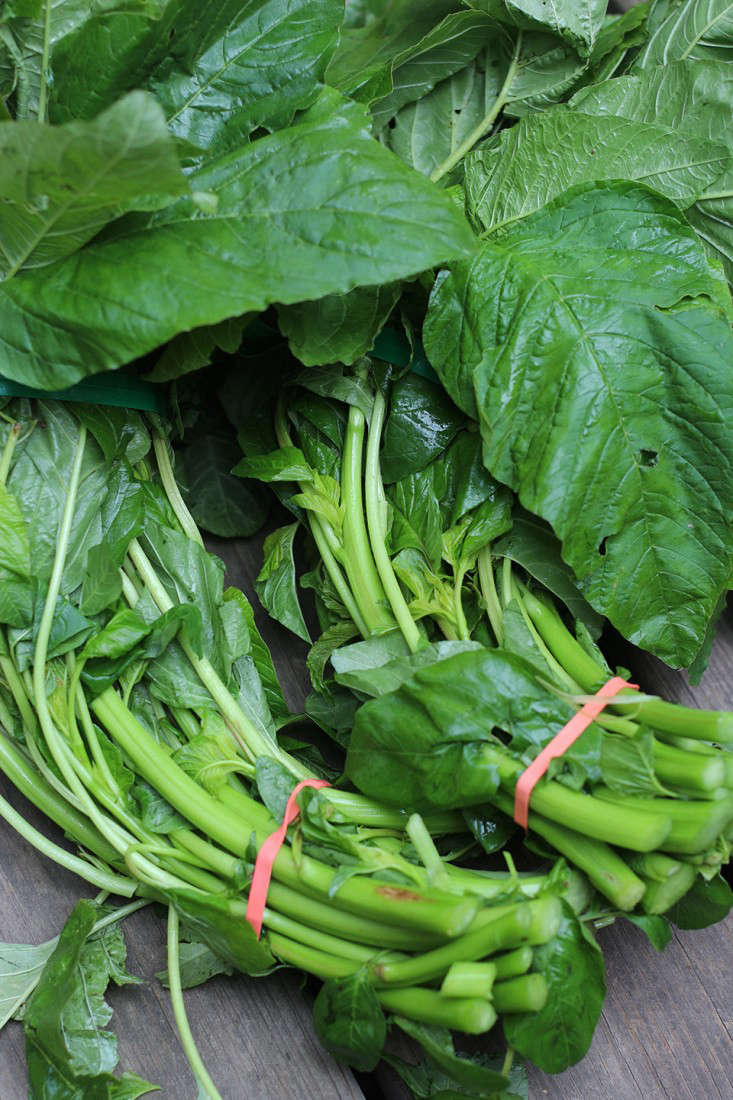 Above: It was while we lived in Harlem that I was thrilled to discover huge bunches of callaloo at a farmers’ market on 125th Street, sold by an upstate New York farmer with a thick Caribbean accent. Then it appeared at a nearby supermarket, nestling between the beets and the carrots. 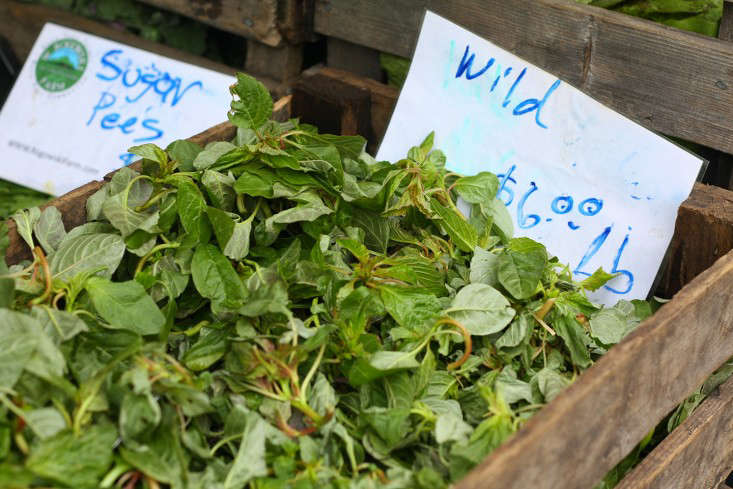 Above: The eating world is slowly warming up to the idea of amaranth as dinner. On my plate at a Brooklyn restaurant I identified pigweed tempura where the menu listed “wild spinach.” Then I spotted it at the Union Square farmers’ market, at First World prices.

Above: For a warm soup, I cook pigweed leaves with lemon juice and vegetable stock and drop in a just-cooked egg before serving. But on the hottest days of summer, too terrified to use the stove, I simmer the leaves for about four minutes with some scallions and olive oil and chicken stock, then turn off the gas and let it steam under a tight lid till tender. Add some yogurt, whizz in a blender, top with some powdered sumac, serve cold.

Above: For pigweed pesto, scoop the gelatinous pulp from a salt-preserved Meyer lemon, and slice the skin into ribbons before chopping it finely. Sauté blanched pigweed leaves in a hot pan with some butter and olive oil and lemon juice. In a food processor put the lemon skin, pigweed, pine nuts, more butter, a raw garlic clove, finely rasped parmesan, and press Destruct. When you have a coarse paste, it is ready for hot, egg yolky pasta. 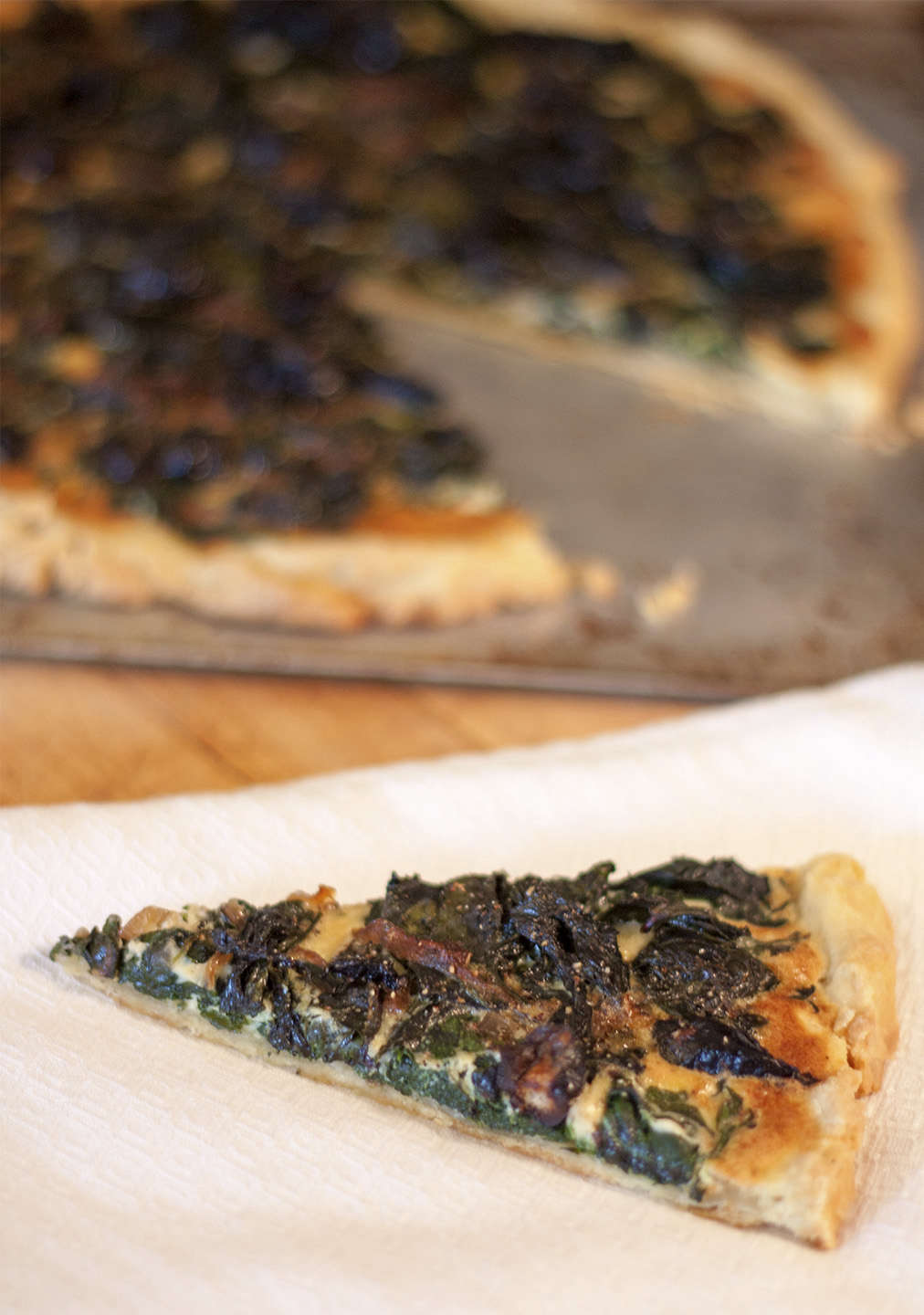 Above: More like a pizza, the dough for this rustic tart is nothing but flour and olive oil and water; instead of being solid, it is crisp and flaky, and very easy. For the topping I used wilted pigweed (or lamb’s quarters) leaves. The recipe is my book, 66 Square Feet—A Delicious Life. 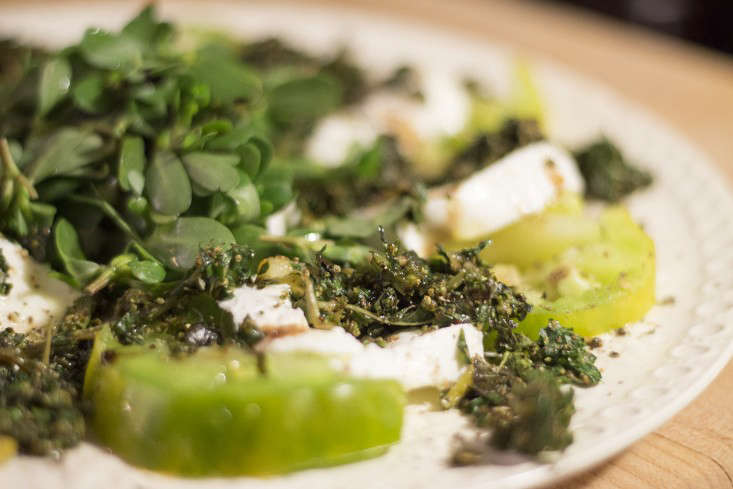 Above: For this salad I sauté the finely chopped leaves and late summer seedheads of amaranth with some thinly sliced lemon zest, allow the mixture to cool, and top green tomatoes and mozzarella with the lemony-green relish. Purslane finishes it off. 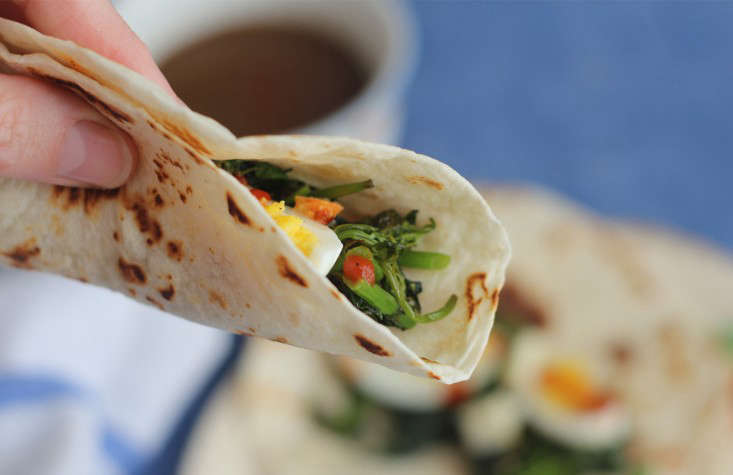 Above: Breakfast on weeds? Why not?

Warm the olive oil in a pan over medium heat and add the garlic. Cook for about 5 minutes until it is turning translucent but not brown. Add the pigweed and stir well. Add a squeeze of lime juice, plus salt and pepper to taste.

Meanwhile, in a hot pan, toast the tortillas on each side still they begin to puff up slightly, then flip until the other side puffs. Keep warm inside a folded napkin.

To serve, scatter the warm greens over the tortillas, dot with small pieces of butter, top with the halved eggs, and finish with a flourish of Sriracha. Fold, eat.

For more weeds you can eat, see Marie’s recipes for Japanese Knotweed Hummus, Pokeweed Sloppy Joes and Milkweed Buds with Soy and Ginger.

Trending on Remodelista: The Summer Kitchen