Can you imagine living in a shipping container? We can–at least in this one.

Jim Poteet of Poteet Architects created a guesthouse out of a container in San Antonio, Texas, maintaining the essence of what was once a humble shipping container, while making it habitable and energy efficient. “We didn’t take the container out of the project and try and turn it into something else,” says Poteet.

It all started after Poteet’s client (an artist and entrepreneur) read an article about container architecture. She purchased one from the Port of Houston, to experiment and create a prototype for affordable artists’ studios. Poteet Architects (a member of the Remodelista Architect/Designer Directory) approached this project with the same sensitivity Poteet showed in adapting some of downtown San Antonio’s existing buildings.

Above: The architects maintained the original color of the container; anything that was added (the steel frame for the rooftop garden, for instance) was painted the same color blue. 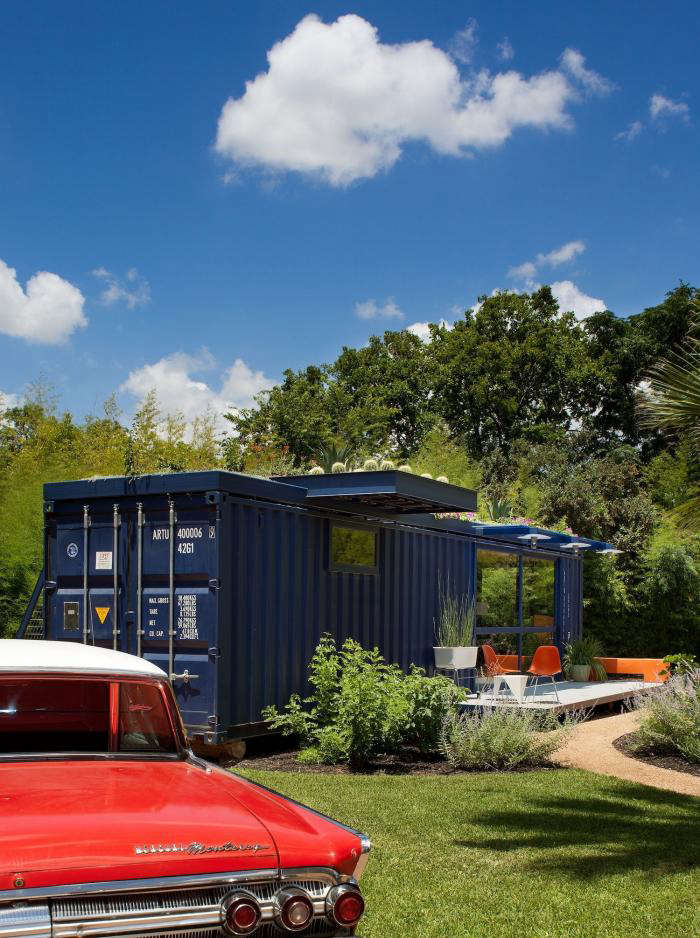 Above: One third of the container has been given over to an air conditioned garden shed and is accessed through the rear of the container, where its original markings remain. The container sits on recycled telephone poles which act as a foundation, allowing for air flow and plumbing pipes. 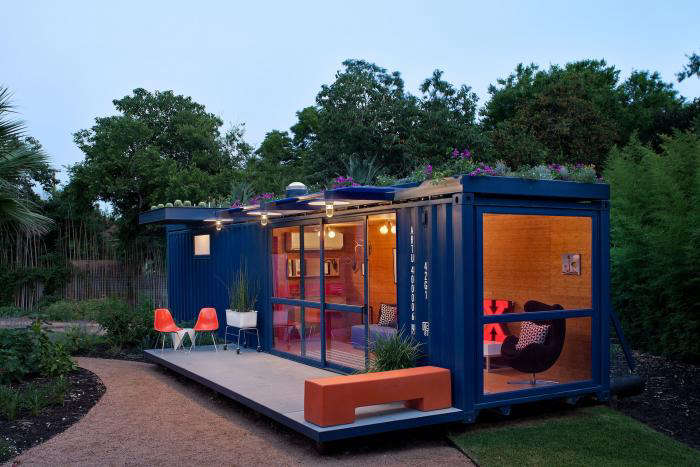 Above: The narrow and long container (it measures 8 by 40 feet) sits on a former light industrial site, which was cleared out and fully landscaped. It now serves primarily as a guesthouse to the client’s main house on the same property. 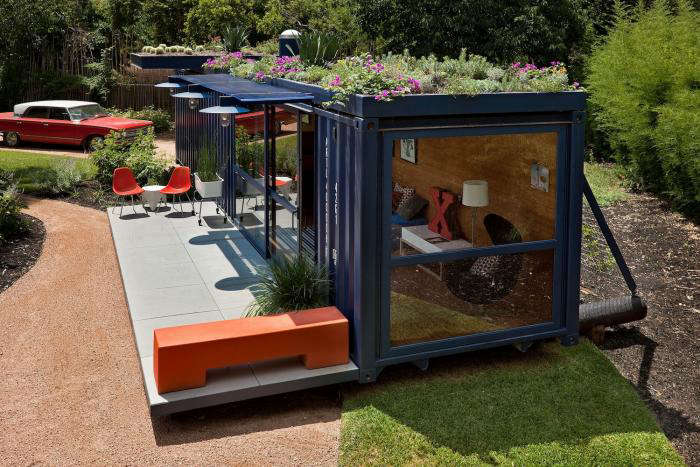 Above: All the water from the shower and sink is collected in a gray water tank and pumped up to water the roof garden, which, along with the insulation that was installed, helps to keep the house cool. The garden planters sit in a steel frame the architects designed to sit above the ceiling of the container, allowing air to flow through and keeping the weight off a non-structural roof. In the back, a vine-covered wire mesh trellis further insulates the container and hides the heating, ventilation and cooling system as well. 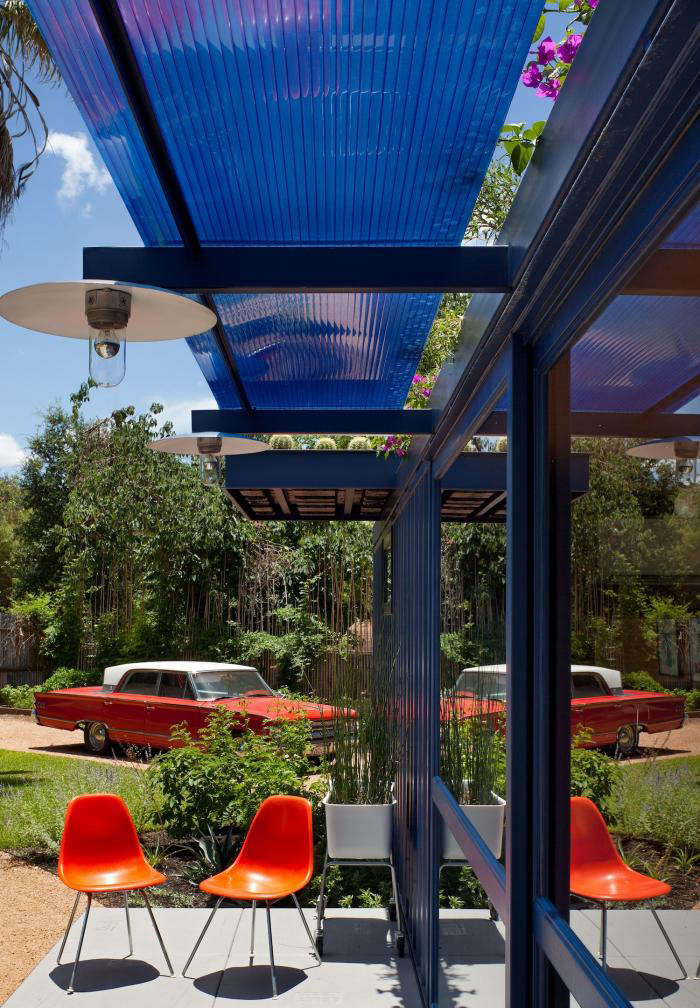 Above: The underside of the roof overhang reveals the rubber cellular planters. 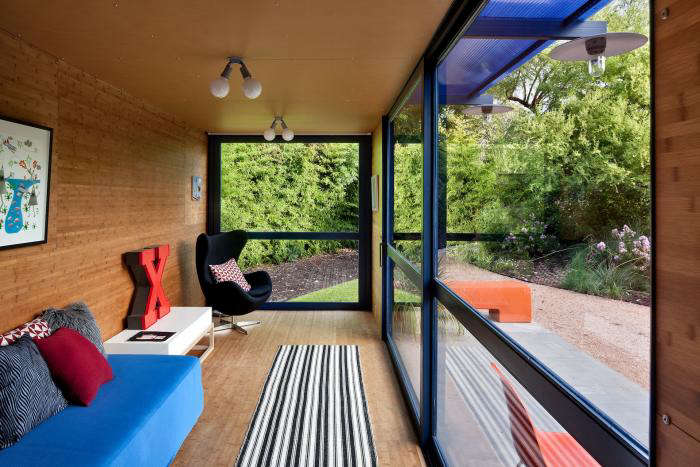 Above: The same material (bamboo plywood) runs lengthwise on the floor and wall. The large openings were achieved by using the skills of a welder. 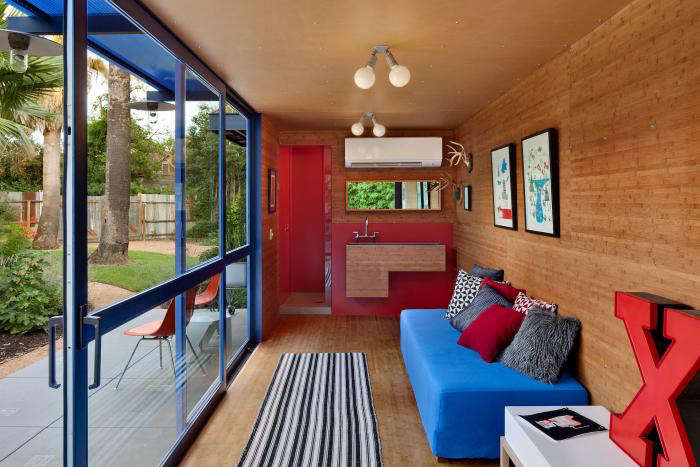 Above: The bamboo plywood used throughout is also used on the face of the sink. The backsplash of the sink is red-painted sheet metal that wraps around from the bathroom beyond. When the guest house is not being used, the client’s daughters use the container for their art projects 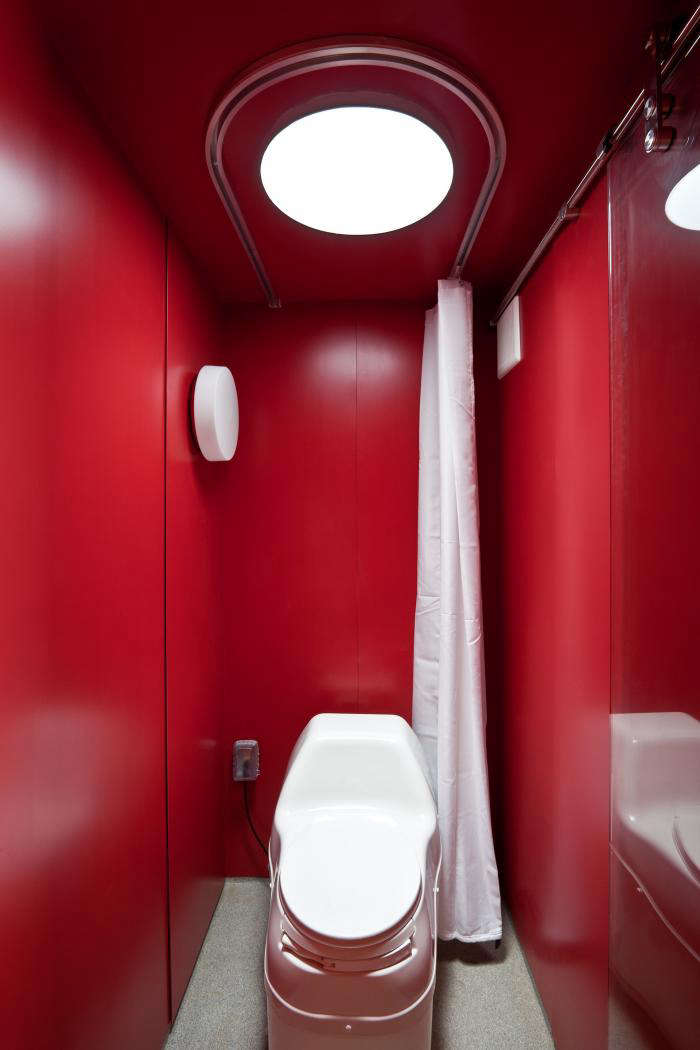 Above: The bathroom holds an electric composting toilet and is lined in red painted sheet metal. A shower curtain runs on a hospital track, offering privacy if required. 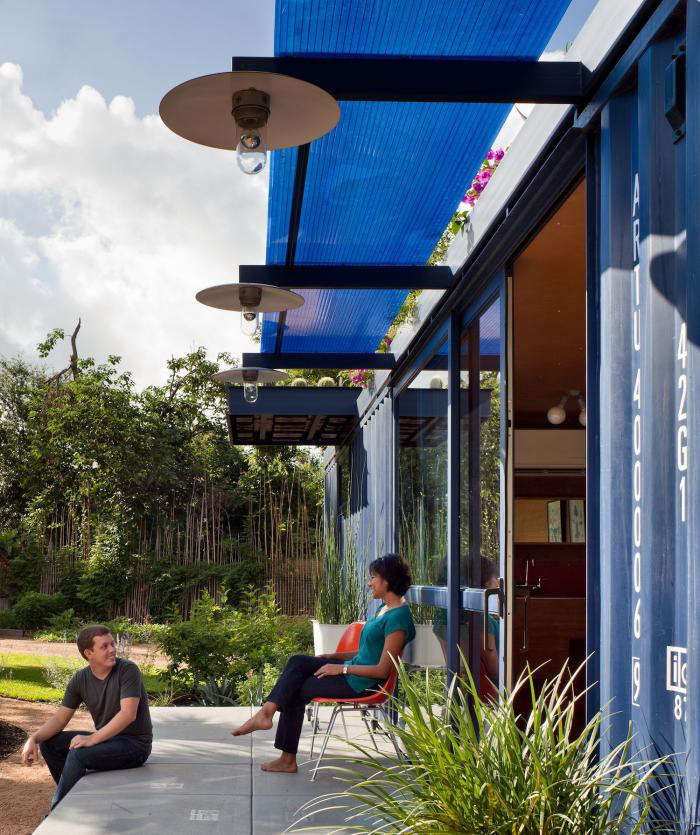 Above: The deck is made of recycled air conditioner equipment pads; a vinyl which is cool on the feet in the heat of the Texas summer. 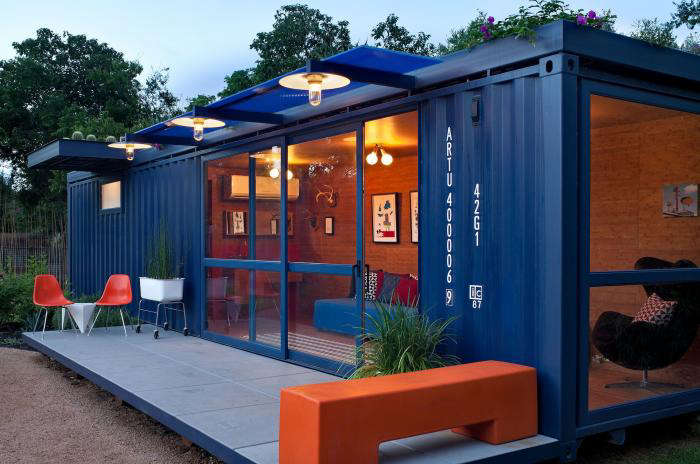 Above: The exterior lights are suspended from the framework that supports the roof garden as well as the blue polycarbonate overhang.

Yearning for your own shed? See 29 images of Sheds in our Gallery of rooms and spaces.

Shopper's Diary: Head Down an Alley, for Tinsmiths of Ledbury